IN THE NEW Medinah Temple recently, erected for the Masonic order of the Mystic Shrine in Chicago, is found one of those rare instances in which a building designed in a historical style remote from our twentieth-century civilization and ideals seems logical and in harmony with its surroundings. This result, no doubt, is due in part to the restraint and artistic balance manifested in the use of architectural and decorative detail, and in part to the peculiar requirements of the Shrine order, requirements that it was necessary to observe in any event.

Arabic design runs easily into exuberance while buildings of the Arabic period are, more often than not, characterized by a lack of organic perfection. and are illogical structurally. In the excellence of its plan and construction the Medinah Temple is thoroughly modern, while the Arabic elements are so woven into the design as to become an integral part of it. This building is, in fact, a modern structure, with Arabic decorative expression. just as the Shrine itself is an organization modern in its ideals, but possessing an Arabic ritual. 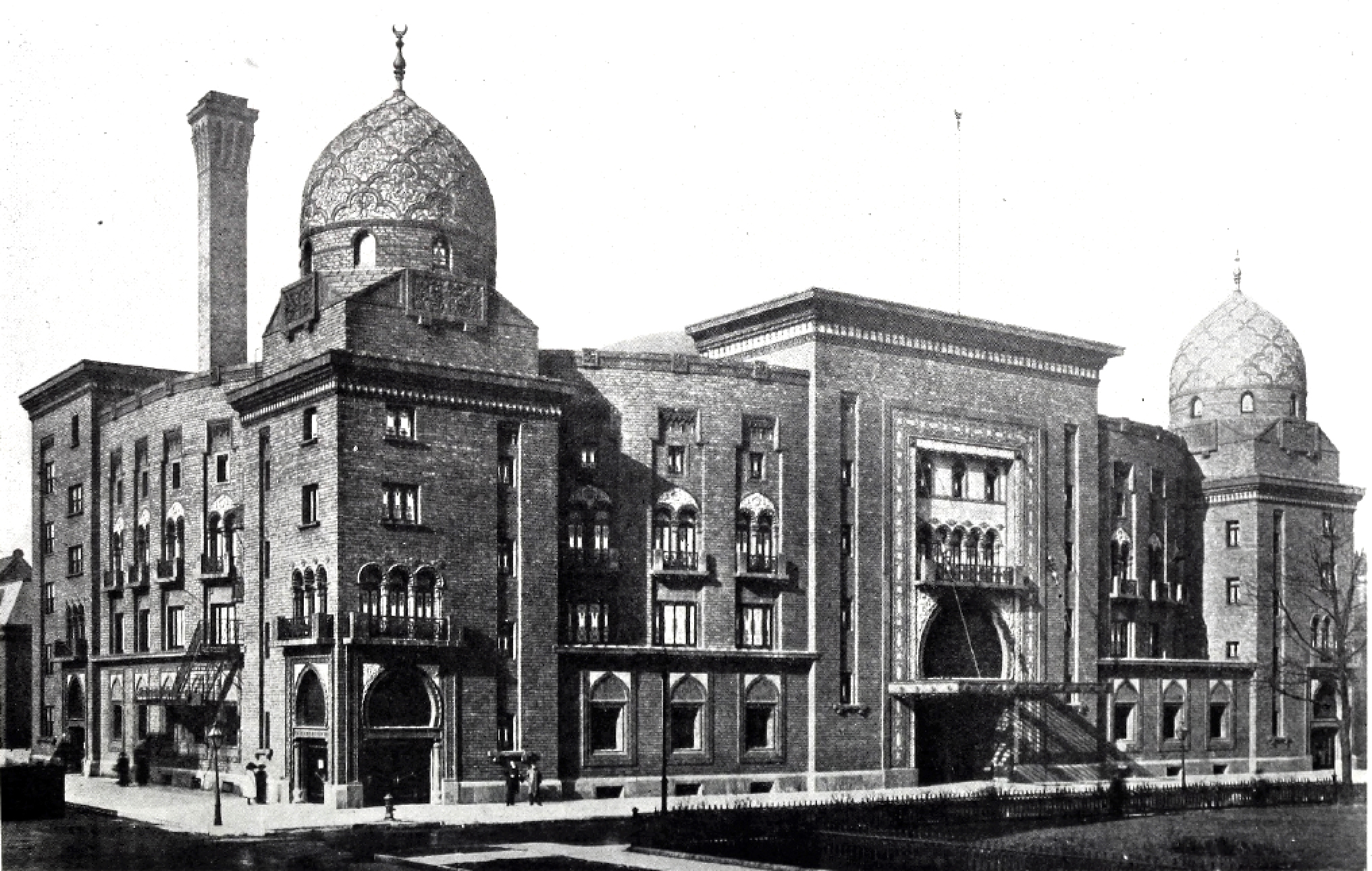 The ground area covered by the building is an even half block, or, to be exact, 218 feet north and south by 150 feet east and west. The main entrance is on Cass street. With the exception of the basement, the greater part of the space, probably 90 per cent, is utilized for the auditorium, the largest and most impressive in the West. The seating capacity of this auditorium, forty-two hundred, is misleading as to the true dimensions, since a large amount of seating capacity is lost through the extension of the stage beyond the proscenium for a distance of about fifty feet, and from the fact that the seating system of the main floor does not extend unde.“ the balcony. This form of stage is required for the classes and entertainments of the Shrine, while the space under the balcony is reserved for checking rooms and parlors. With the stage and the main floor seating arranged as in an ordinary theatre, this auditorium would have a seating capacity of over seven thousand. The various rooms required for the business of the Shrine are ingeniously grouped along the borders and in the corners of the building. The basement is utilized as a banquet hall, with a seating capacity of twenty-three hundred.

In considering the architectural and decorative treatment of this building, it is well to bear in mind that some features necessarily occur that are important to members of this secret order, but are not of special significance to others. It is believed that no member of the Shrine, or that no layman, for that matter, who knows something of the ideals of this order, would ever mistake the building for other than what it is. At the same time the building is in harmony with its surroundings. The noting of two such facts as these is, in a way, commendation as great as can be given any architectural design. In general effect, the exterior is brown, the color of the brick and most of the terra cotta. But monotony of color is effectively avoided by the use of red, yellow, blue. white and gold, applied with the boldness characteristic of Arabic design. All forms of arch common to Mahometan architecture——the semicircular, horseshoe, pointed and keel-are employed in the exterior. At all the entrances the horseshoe arch slightly pointed, is used. The historic Arabic inscription, “There is no God but Allah,” repeated as an ornament, forms a border around the rectangle of the main entrance. This inscription is in the Italic Arabic characters. and is copied from the Alhambra. Aside from this inscription there is no actual copying in the entire building. the decoration and ornament being worked out in the spirit of Arabic design. rather than in direct imitation of it. The decorative details of the exterior are of terra cotta, in standard finish. with the exception of the inscription, which is white enameled terra cotta.

The general form of the building is rectangular to the second-floor level. Above this level the outline, exclusive of the towers, follows the curved form of the auditorium, eliminating floor space, for which there is no specific need, and adding to the picturesque effect of the exterior. It will be noted that, contrary to the most common Arabic precedents, there is no wall decoration. the decorative treatment being confined to entrances. windows, cornices and domes. At the same time, the exterior, as a whole, is rich in decorative effect, while there is a decided decorative value even in the blank wall spaces. The latter feature is evidently due to the modified form of Flemish bond used in the brick work. In this form of bond the brick are laid in “four-to-one” units, each stretcher consisting of four ordinary brick, and each header of two brick of the ordinary cross-section but sixteen inches in length. The units are formed with close joints, and are separated by joints three-quarters of an inch in thickness. The corner domes have pointed-arch sections. They are formed of terra—cotta panels, wrought in elaborate Arabesques, and supported on curved steel ribs.

The principal feature of the building is the auditorium, all other parts being subordinate to this. It is. therefore, in the auditorium that the most important features in plan and decorative effect are to be found. In an interior of this size a block long and nearly half a block in width from the proscenium to the east wall—with a ceiling fifty feet above floor level, and supported by only two visible columns—with a bare stage projecting far into the seating area—a barn-like effect might easily result. This interior, on the contrary, produces an effect both of compactness and spaciousness. Aside from three dominant features—the heavily beamed ceiling, the domes and the mural painting over the proscenium—the decoration is simple, consisting mainly of slender borders, corner pieces in the wall and ceiling panels, and a somewhat elaborate border in bas relief around the rectangles of the proscenium.

The beaming of the ceiling gives a wealth of detail to what would otherwise be a dead expanse of surface, and, what is of equal importance, it expresses structure in such a way that no one who gives thought to such matters could be mistaken as to the form of construction of this ceiling. This construction consists of a system of steel trusses, between which are framed secondary trusses and girders. The exact location of each truss and its function in the structure is easily followed in the beaming. A truss having a span of 92½ feet extends from each column to a support in the proscenium wall, while a similar truss connect the two columns. These trusses furnish primary support for the central portion of the ceiling. The columns are of reinforced concrete. 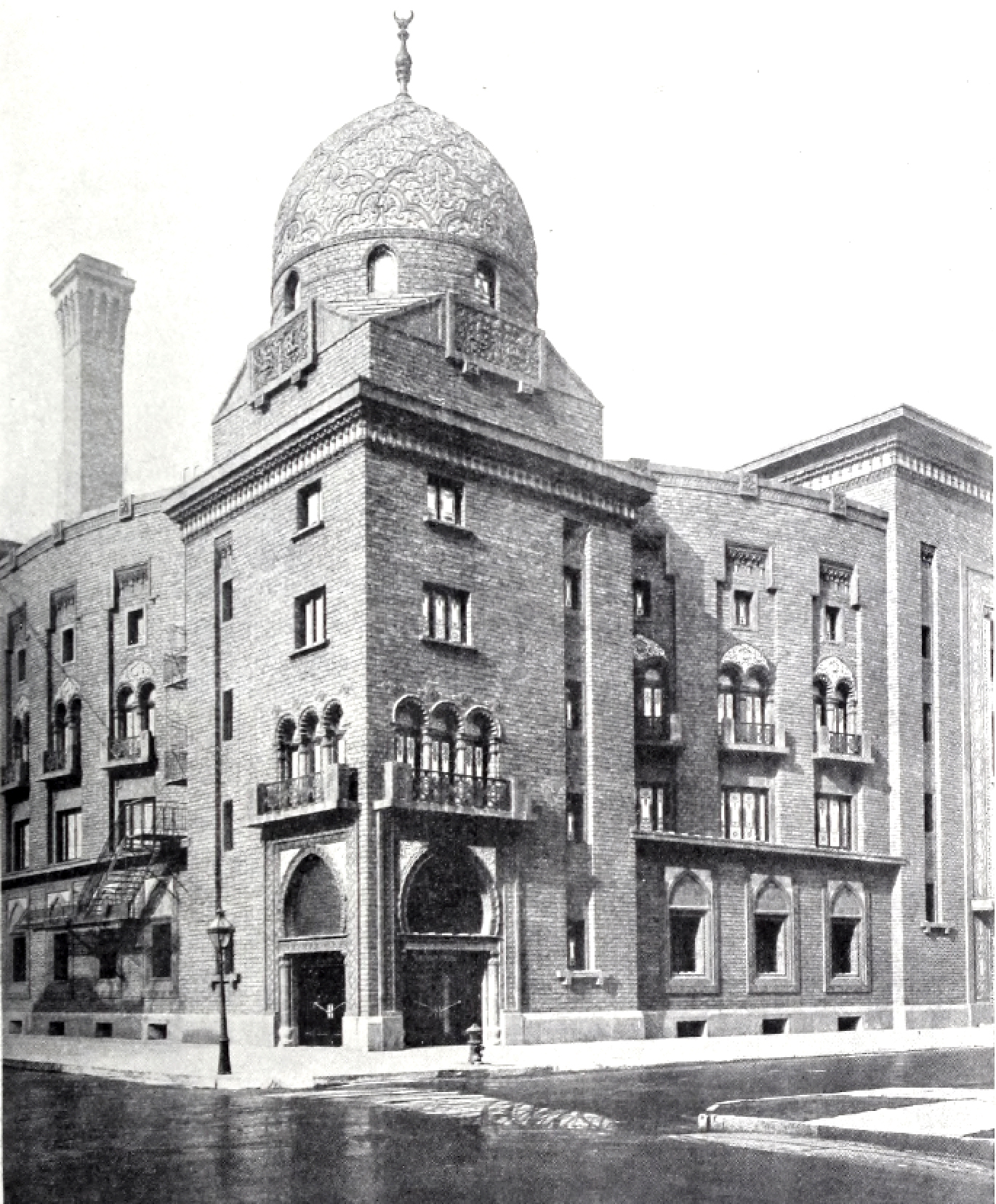 The central dome is the most striking feature of the entire building. and is an object of rare beauty when illuminated by the chandelier, twelve feet in diameter, suspended from its center. This dome has an inner and outer shell, with an inside diameter of fifty feet. It is supported on curved steel trusses, each truss being nine feet deep at the ceiling line and three feet deep at the crown of the dome. Here again. in the visible ribs of the dome. is found an unmistakable expression of structure. These ribs carry no ornament, and thus serve to emphasize the rich decoration of the included panels. The decorative value of the dome is still further enhanced by the stained glass windows, in green, red and gold, with which each of the panels is pierced. As is usual in large auditoriums, artificial lighting is depended on for illumination, the windows being designed more for decorative effect than for illuminating purposes. In addition to the chandelier suspended from the central dome, each of the other domes carries a smaller chandelier, while a cluster of lights is placed in the center of each ceiling panel. 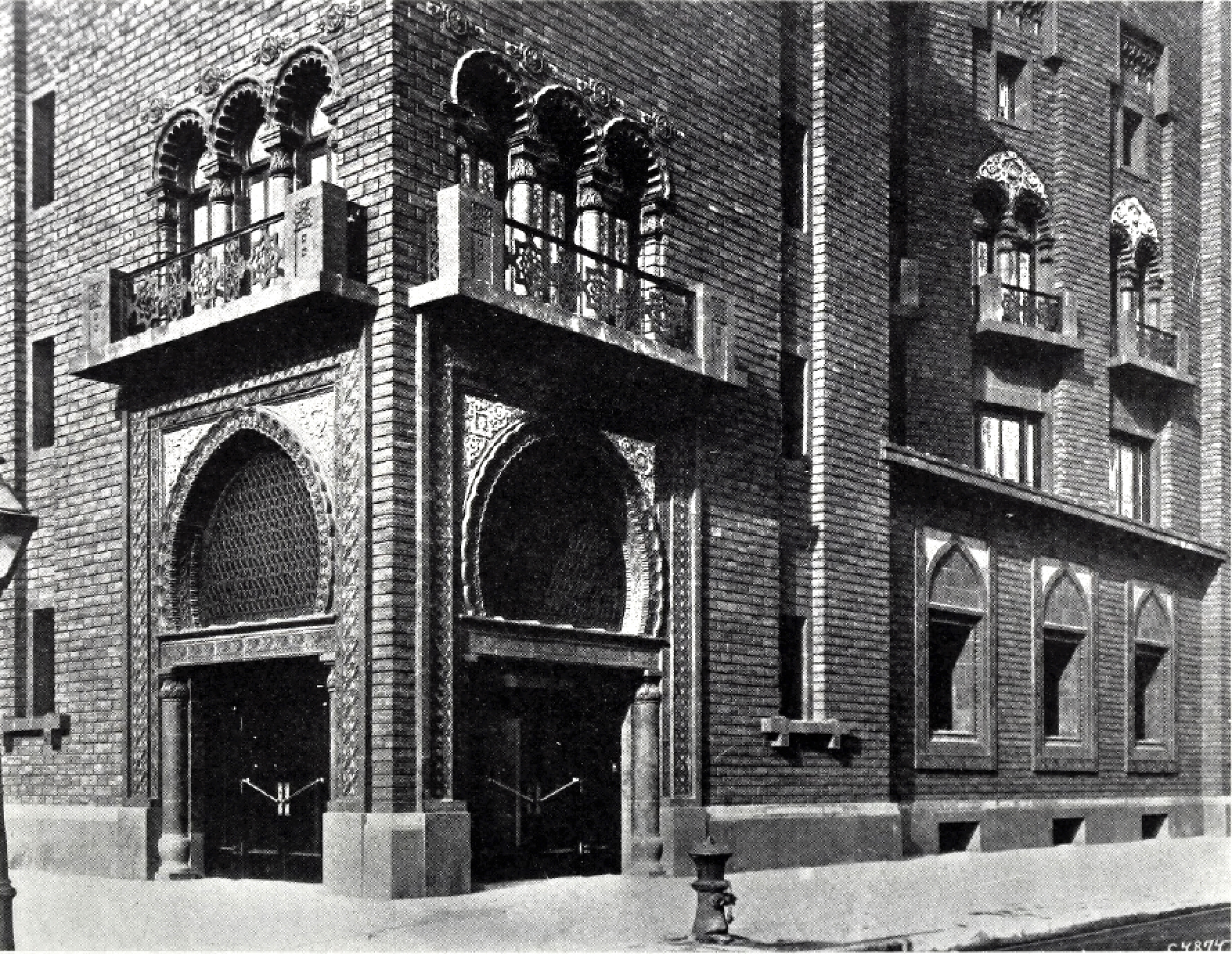 Detail of Corner Entrances and Balconies.

The requirement of the Mahometan creed prohibiting the representation even conventionalized, of human or animal forms, is rigidly observed in all parts of the building except in the parlors and smoking rooms. The effect sought in these rooms is one of quiet and repose. Brown and green are the dominant notes in the color scheme. In the north parlors’ the floors are of brown and white tile, the wainscoting is light brown, and the hangings are green.

The entire building, with the exception of the slight digression noted in the parlors, is carried out consistently in the Arabic style, a style as far removed from present-day requirements as could well be imagined. In spite of this fact the design carries with it the conviction that it is the logical solution of this particular problem. The building is composed of permanent materials throughout. A quality worthy of particular note is the honesty observed in the use of materials; all the brick terra cotta and concrete, being frankly such and not imitations of some other material. 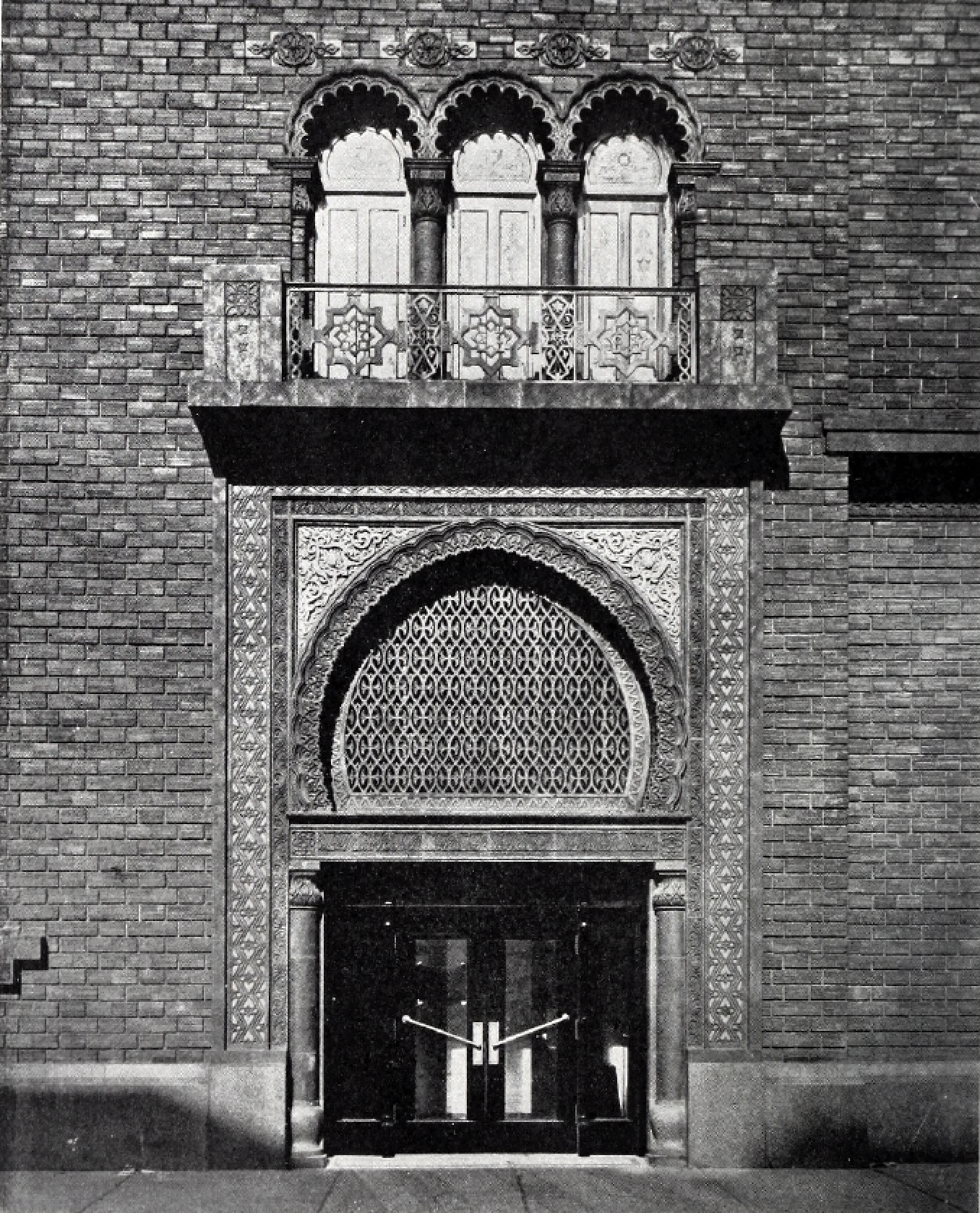 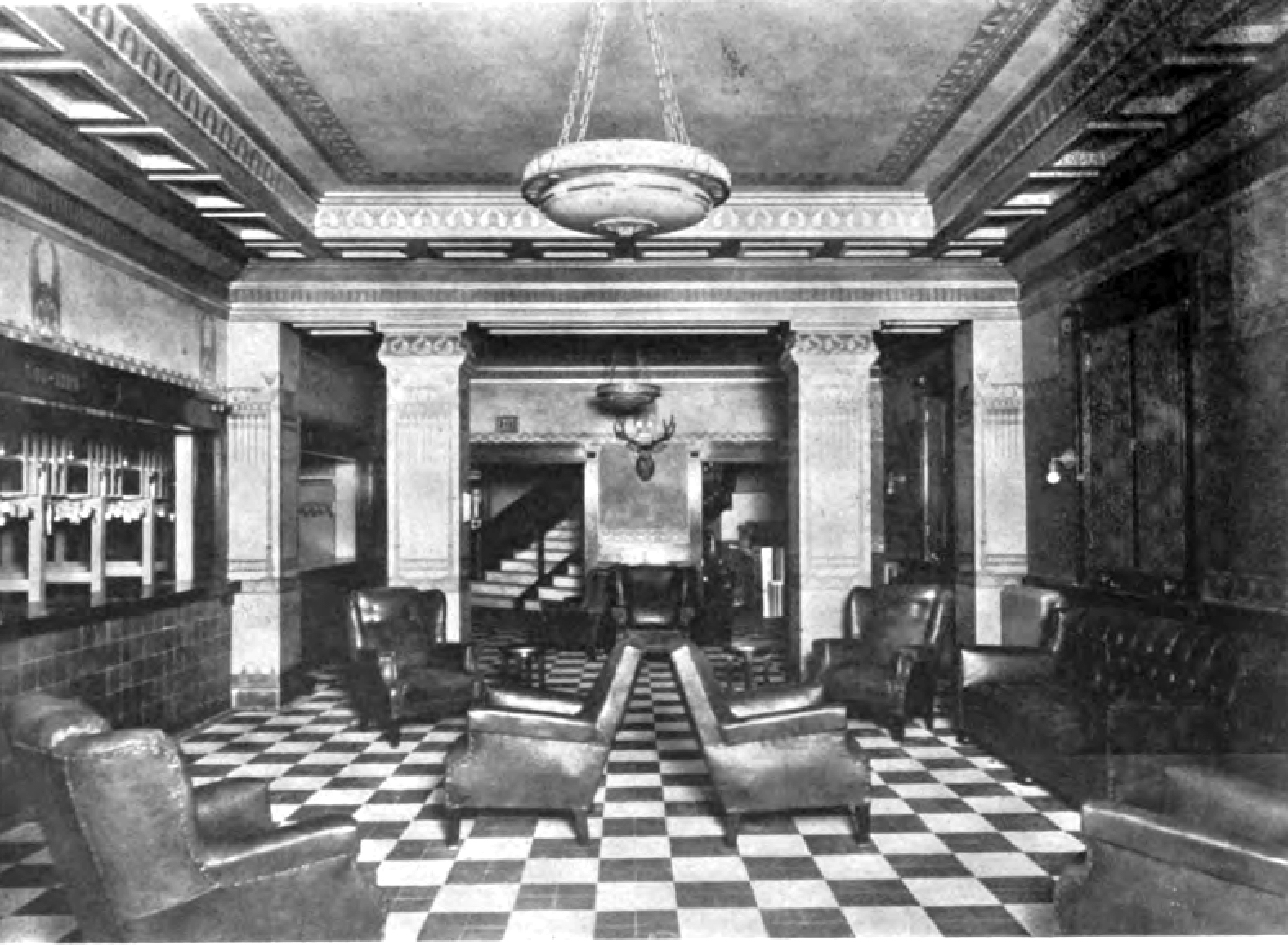 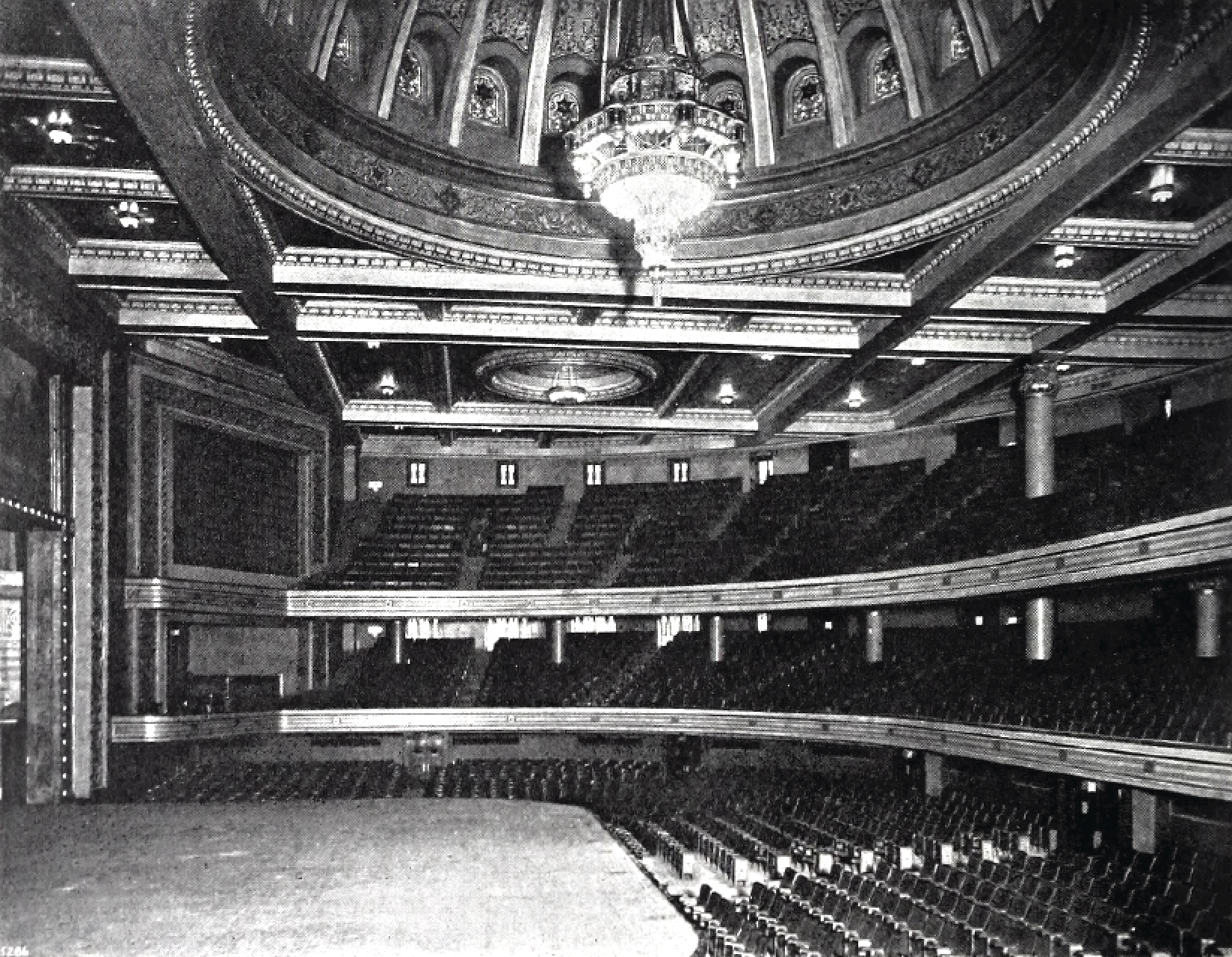 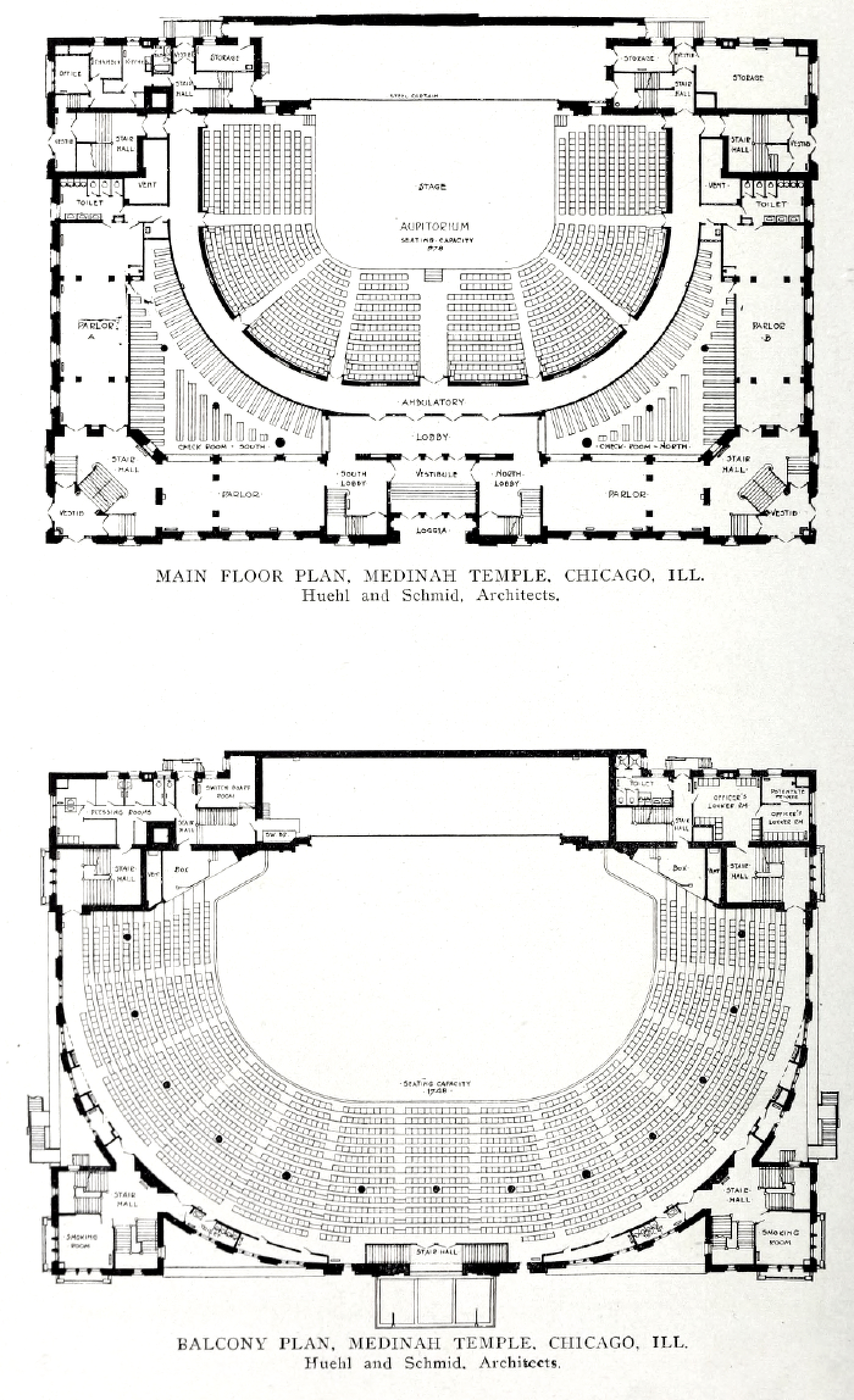 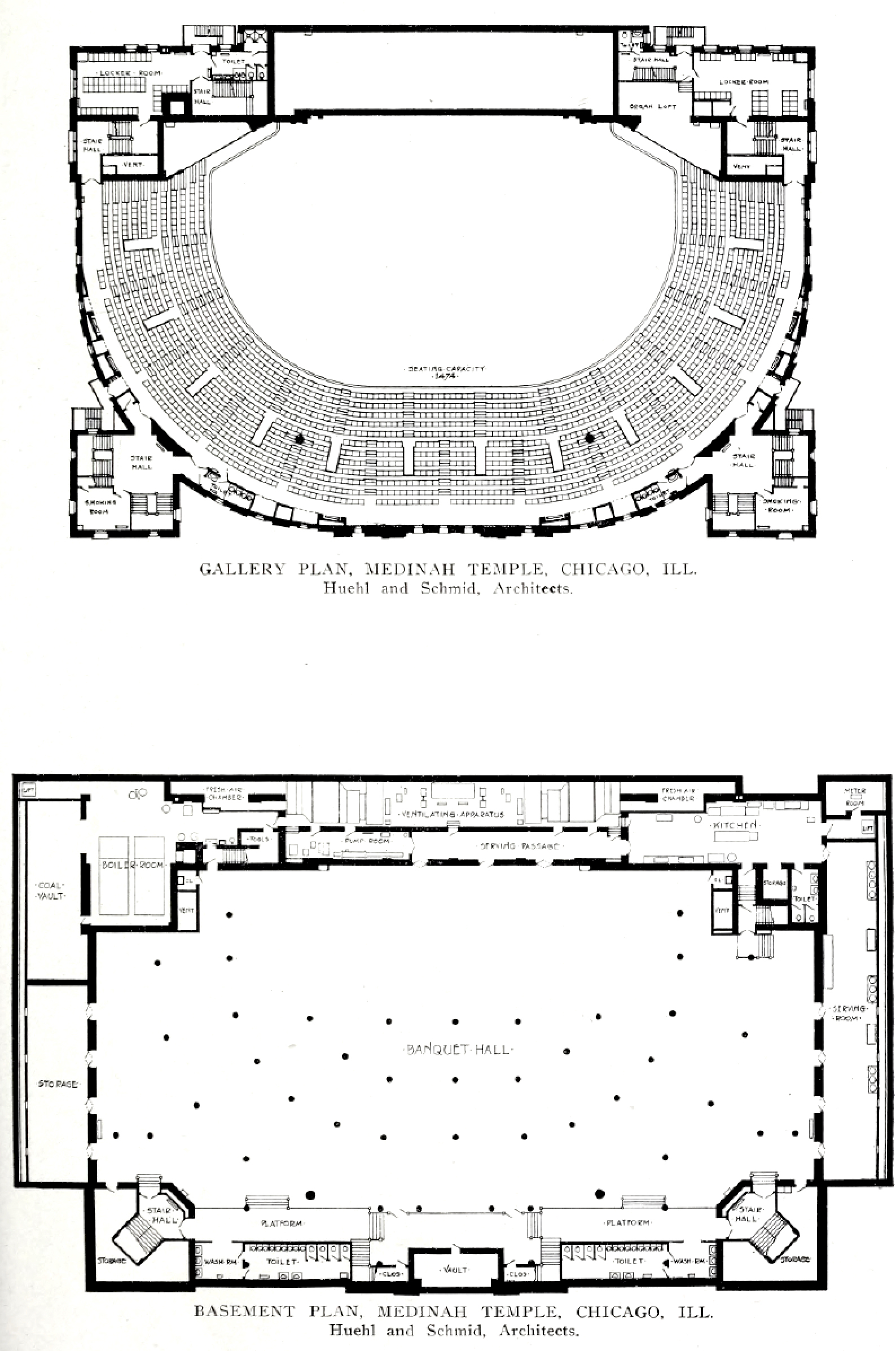 The major alteration to the Medinah Temple has been a series of changes to its comer pavilions. The building’s original terra cotta domes were removed in around 1939 and replaced by rebuilt, fJat-roofed pavilion. 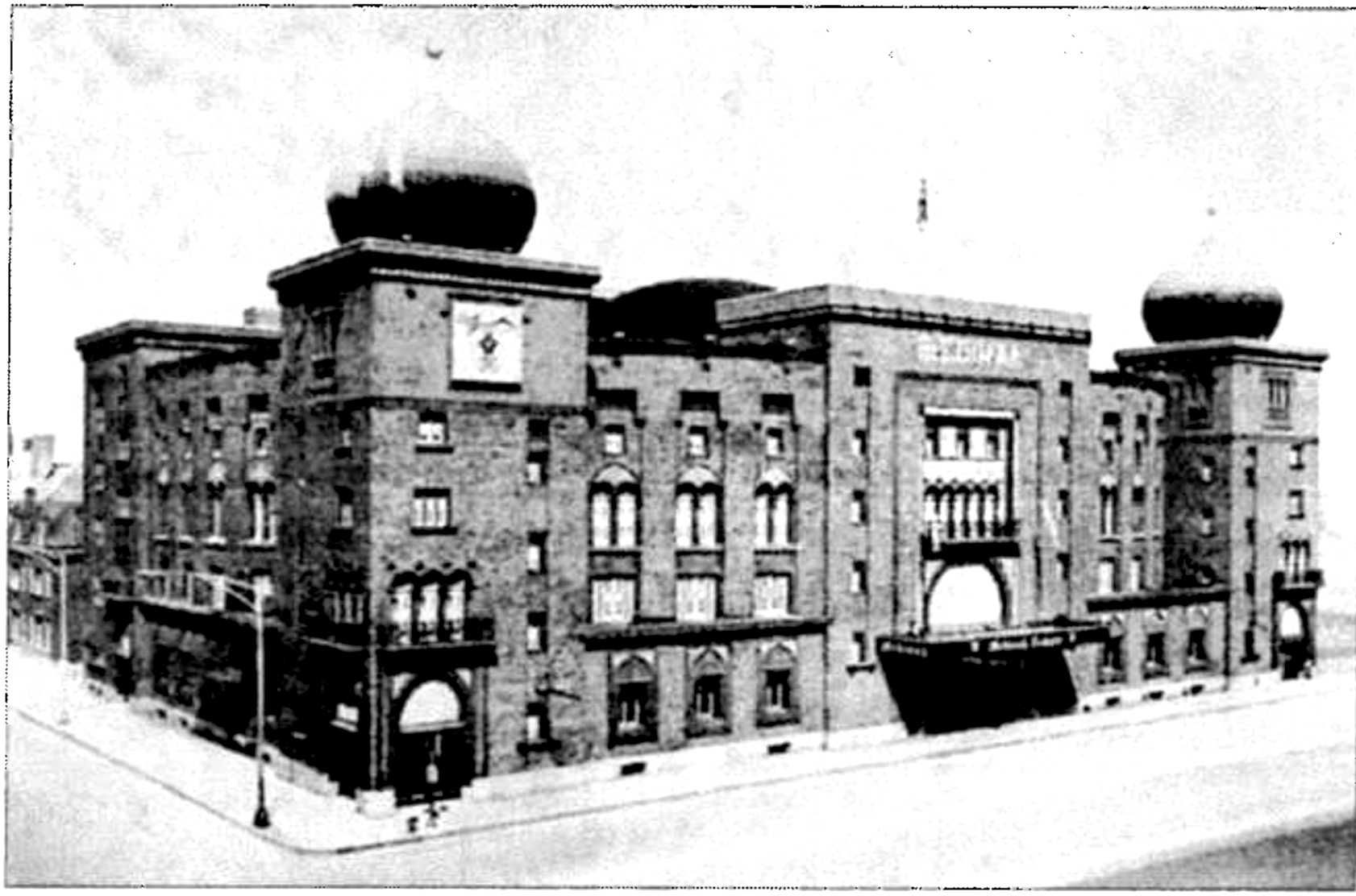 In 1954, these pavilions were topped by sheet-metal, onion-shaped domes that, subsequently; were removed in 1995.

BY H. LEE MURPHY
Chicago’s Medinah Temple, home to the Bloomingdale’s home furnishings business, is being put up for sale by parent company Macy’s.

The 130,000-square-foot Moorish Revival building, threatened with demolition until Bloomingdale’s stepped in 15 years ago to erect a satellite beyond its main store on Michigan Avenue, will be emptied as Macy’s continues to downsize its retail holdings around the country. The home furnishings products, ranging from cookware to bedding, will be moved into Bloomingdale’s Michigan Avenue location to make way for the sale. 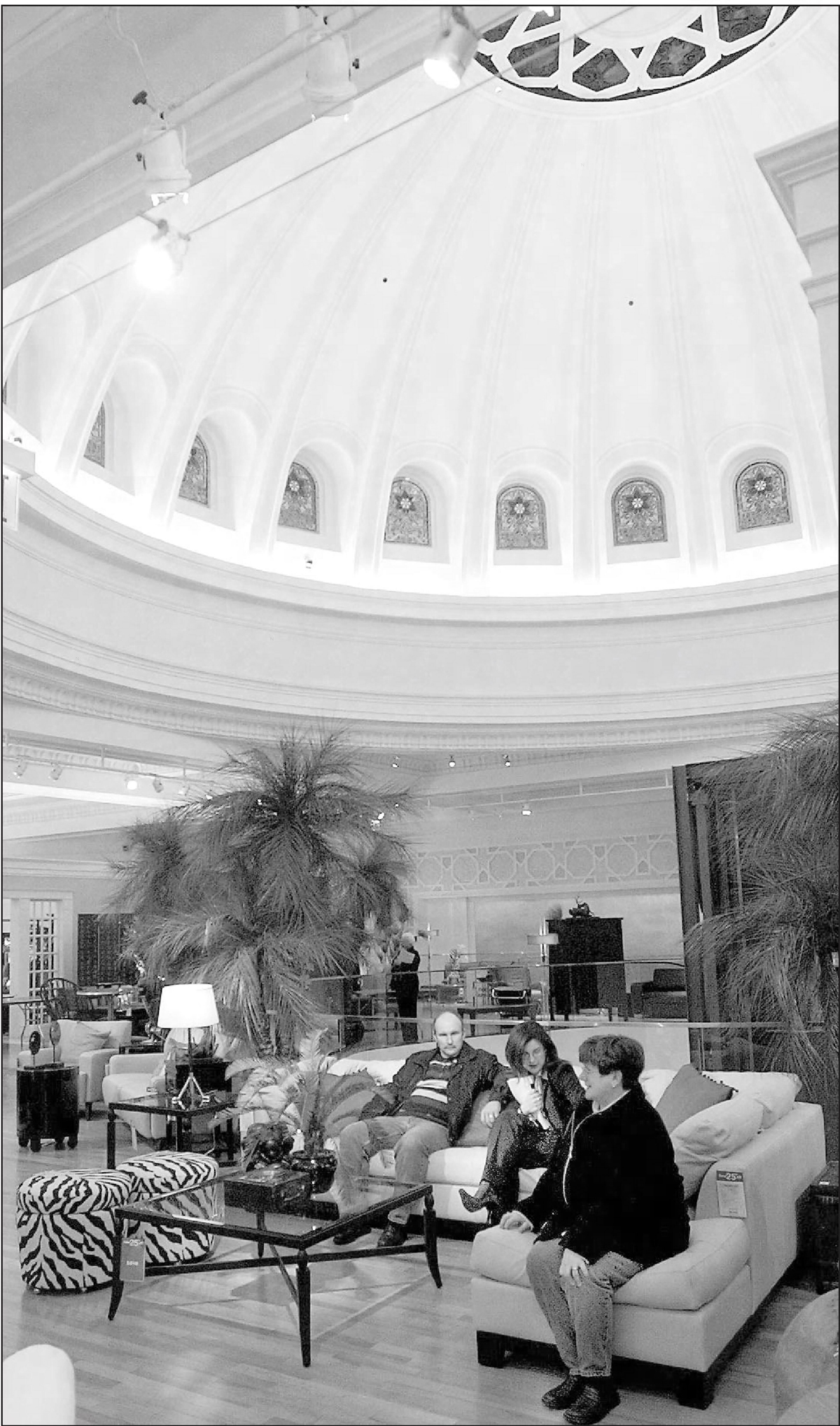 In a statement, a Macy’s spokeswoman said the retailer’s Home Store will be relocated within the Bloomingdale’s store at the 900 North Michigan Shops. She did not give a timeframe for the change.

The retailer “has been reviewing its real estate portfolio across the country to see if there are opportunities to improve the use of our assets,” the statement said. “After careful consideration, the company is marketing the potential sale of the long-term ground lease of its Bloomingdale’s Home Store at Medinah Temple. The company previously shared this information with store colleagues because they are important to our organization.”

Local real estate brokers say Medinah’s landmark status, as well as its location two blocks from Michigan Avenue, are likely to limit interest from other retailers. “It’s not exactly the blank slate that lots of people like to deal with,” said one broker.

Scott Fithian, executive vice president at the Lord Cos., which represents many River North tenants and landlords, observed that “Macy’s downsizing is the way that traditional retail has been going. This decision to sell Medinah Temple is not unexpected.”

He predicted further that the building “is marketable. There will be decent interest. But the big question will revolve around what price Macy’s is asking.” He said his firm has fielded a variety of calls recently from co-working firms seeking to establish new flexible offices in the area. “The other possibility is transforming this space into entertainment uses,” Fithian said. “There are developers of video gaming lounges and virtual reality spaces looking for space.”

Another possibility: In much of Europe so-called rage rooms, including the Fury Room in Paris, are coming into vogue as a destination for stressed-out city workers seeking refuges where they can actually scream and smash things in privacy. “People are trying to find things to do that they can’t do at home on the Internet,” Fithian said.