The plans for C. C. Hanson’s Manhattan Building are being rapidly pushed to completion by Architect W.L.B. Jenney. The actual work of construction will begin shortly. The building is to go up on Dearborn street south of Van Buren to Third avenue. The structure, which is to be sixteen stories in height, presented a difficult architectural problem in the way of building suitable foundations. The Como Building is on one side of the lot and another tall building at the other side. It would have been a difficult and costly piece of work to undermine the foundations of these two buildings so as to make room for a foundation strong enough to sustain the outside walls of the new sixteen story building. The architect overcame the difficulty, however, with a most simple solution of the problem. Instead of running up the main walls at the outside lines of the lot they are to be put up several feet inside the edges of the lot. This gives plenty of space for putting in as massive foundations as are necessary and without adding to the cost or taking anything away from the architectural strength of the building. This building is to be supported throughout by an independent steel framework, the the masonry being simply a fireproofing, and the strength of the building being entirely Independent of the masonry. This plan was first introduced by Mr. Jenney in the Home Insurance Building and afterwards adopted in the Rookery and Tacoma. A St. Paul architect has lately come to the front with a claim for a patent and has notified the Tacoma people that they must contribute royalty. His claim is ridiculed by architects here. The MAnhattan Building will cost about $800,000.

The Manhattan office building for C. C. Heisen, fronting on Dearborn street and Third avenue, Chicago W. L. B. Jenney, architect, Chicago. The building has two fronts, each 150 feet in length, and a depth of about 68 feet, situated between party walls. On the north is a building occupied by printers, in the basement of which are three boilers against the party wall, furnishing power for the steam presses, and on the south a fine office building, the basement for rent as stores or shops. To have carried these party walls the sixteen stories, would have necessitated the removal of the boilers and the building of new foundations under each of the walls, requiring the use of each of the adjacent basements for some months, and from the necessities of the case entailing a very large expense, particularly the removal of the boilers, depriving that building of power until they could be reset. To overcome these difficulties the party walls are used for but little more than their present height, and the upper portion of the building carried on the inner partition walls of the end stories. The building is throughout a skeleton of steel, fireproofed, the columns in. each pier extending to the footings. The elevators are four in number, situated in the center of the building. The offices and stores occupy the entire street fronts, with the sole exception of the entrance ways, giving a very large proportion of rentable space. 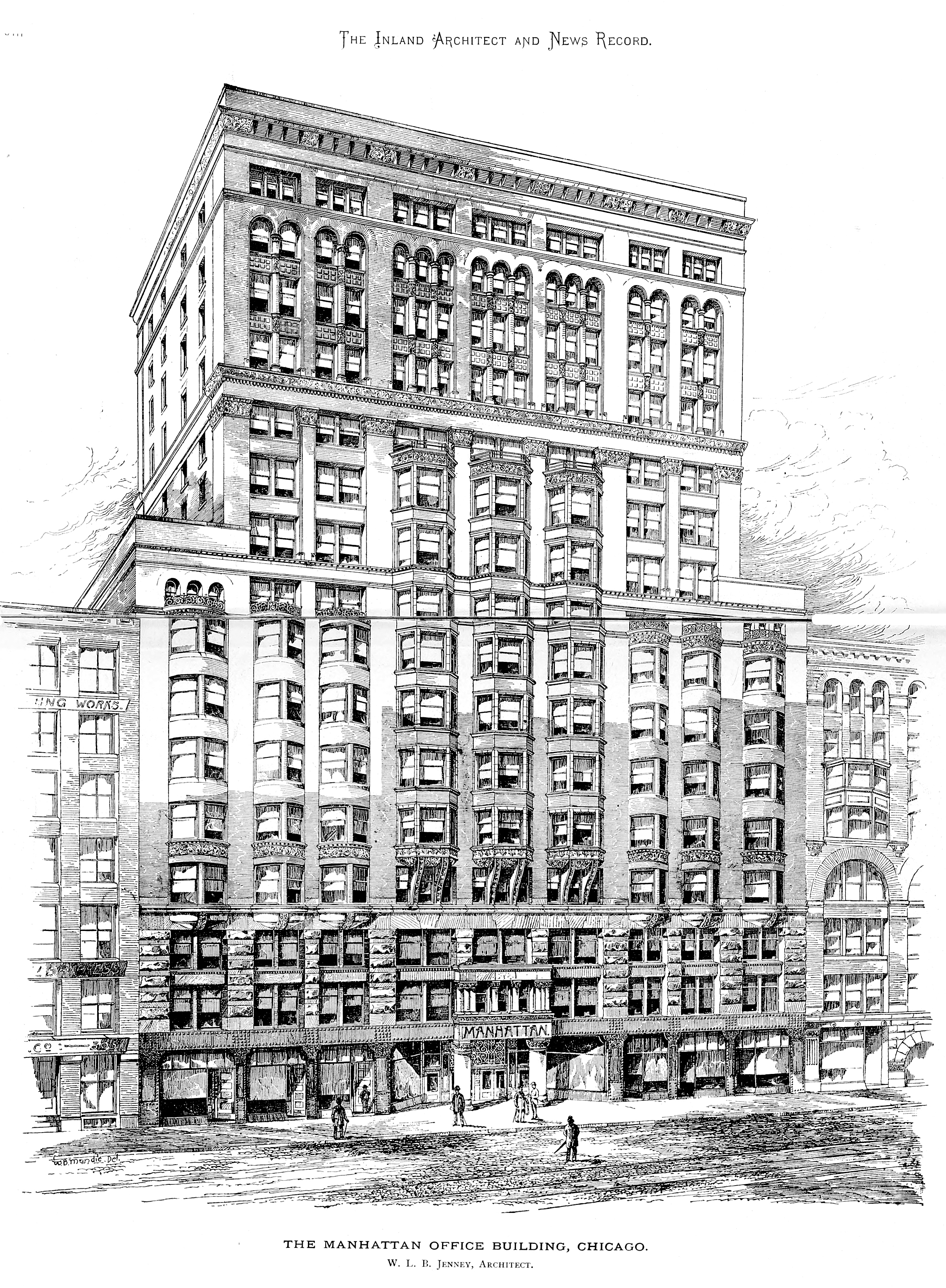 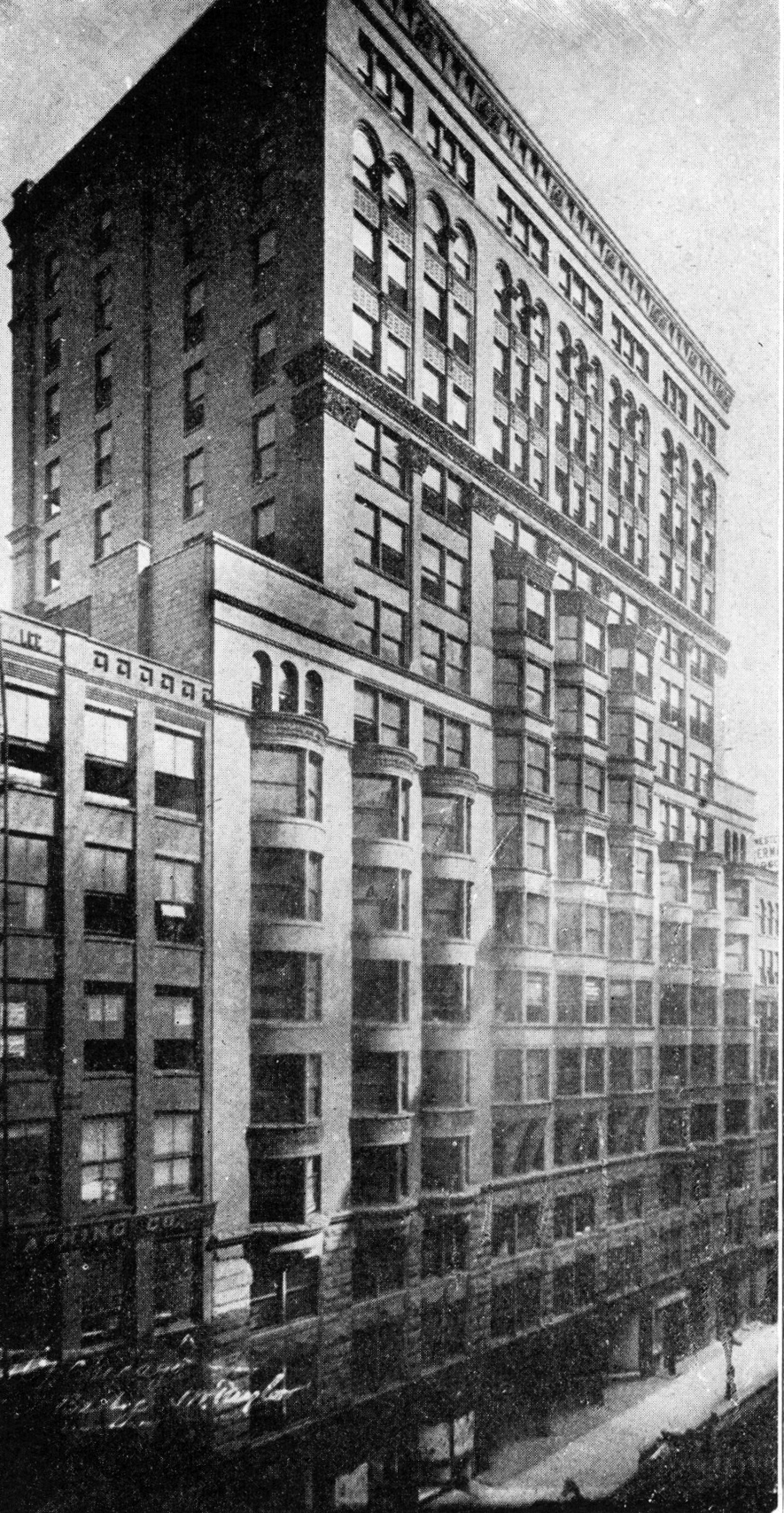 Rand McNally’s Bird’s-Eye Views and Guide to the City of Chicago, 1893

The Manhattan Building.
At 317-321 Dearborn Street, was the first 16-story building erected in America. The Unity, farther north many blocks, was making the same progress, together causing people to stare with astonishment. No other building intended for tenants who were not steeple-climbers had ever ventured to such dizzy heights, and there was some breakage of window-glass under the straining of the unfinished and unanchored pile. W. L. B. Jenney was the daring architect.It has shoulders like a grain elevator. It has frontages of 150 feet on Dearborn Street and Plymouth Place, and is 68 feet deep, with a height of 200 feet. There are 3 stores, 600 offices, and 5 passenger elevators. The exterior is of granite, Roman brick, and terra cotta. The interior is of steel, tile, and cement. The building is tenanted by manufacturers’ agents and publishers. It cost $850,000, and was erected in 1890. 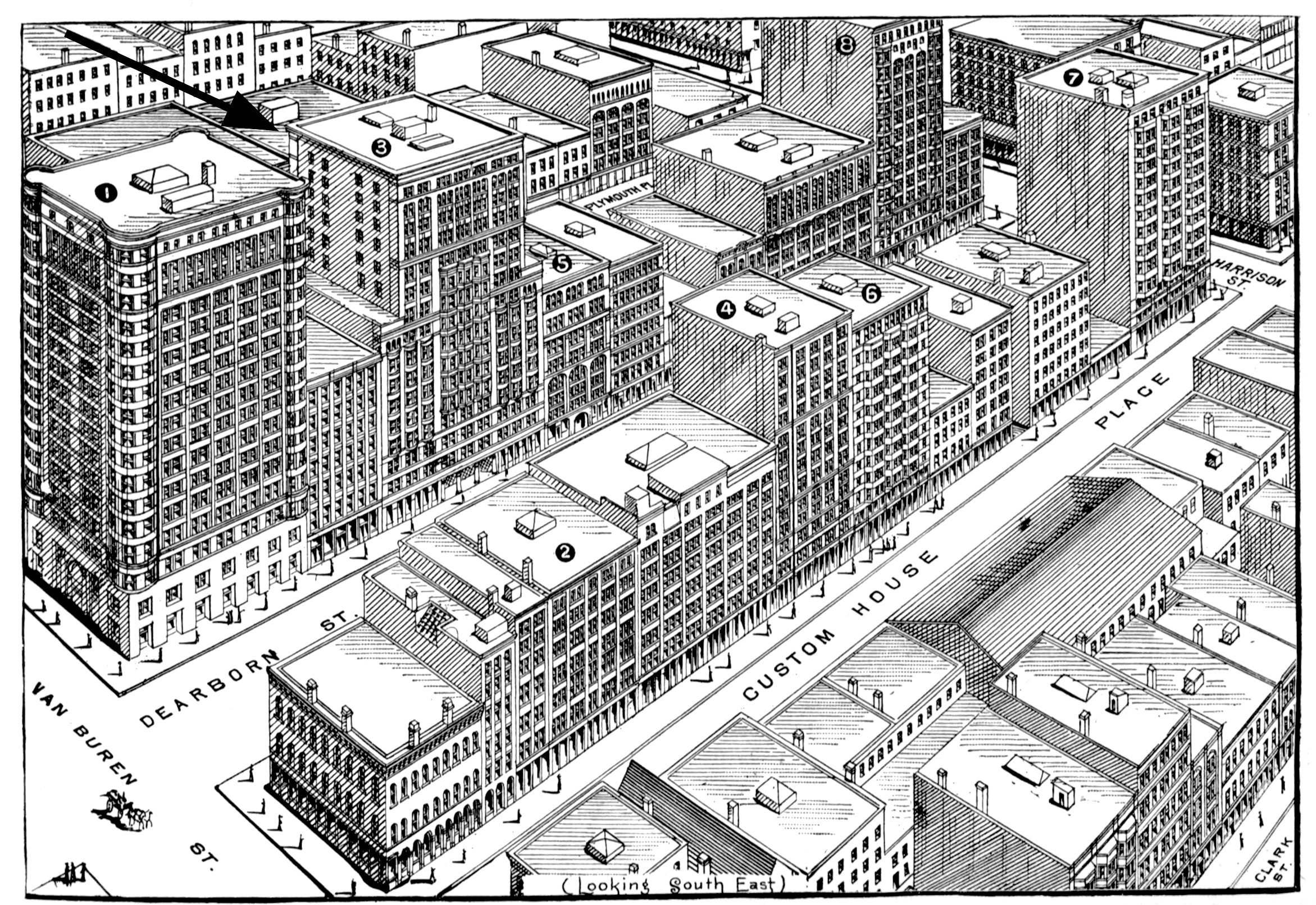 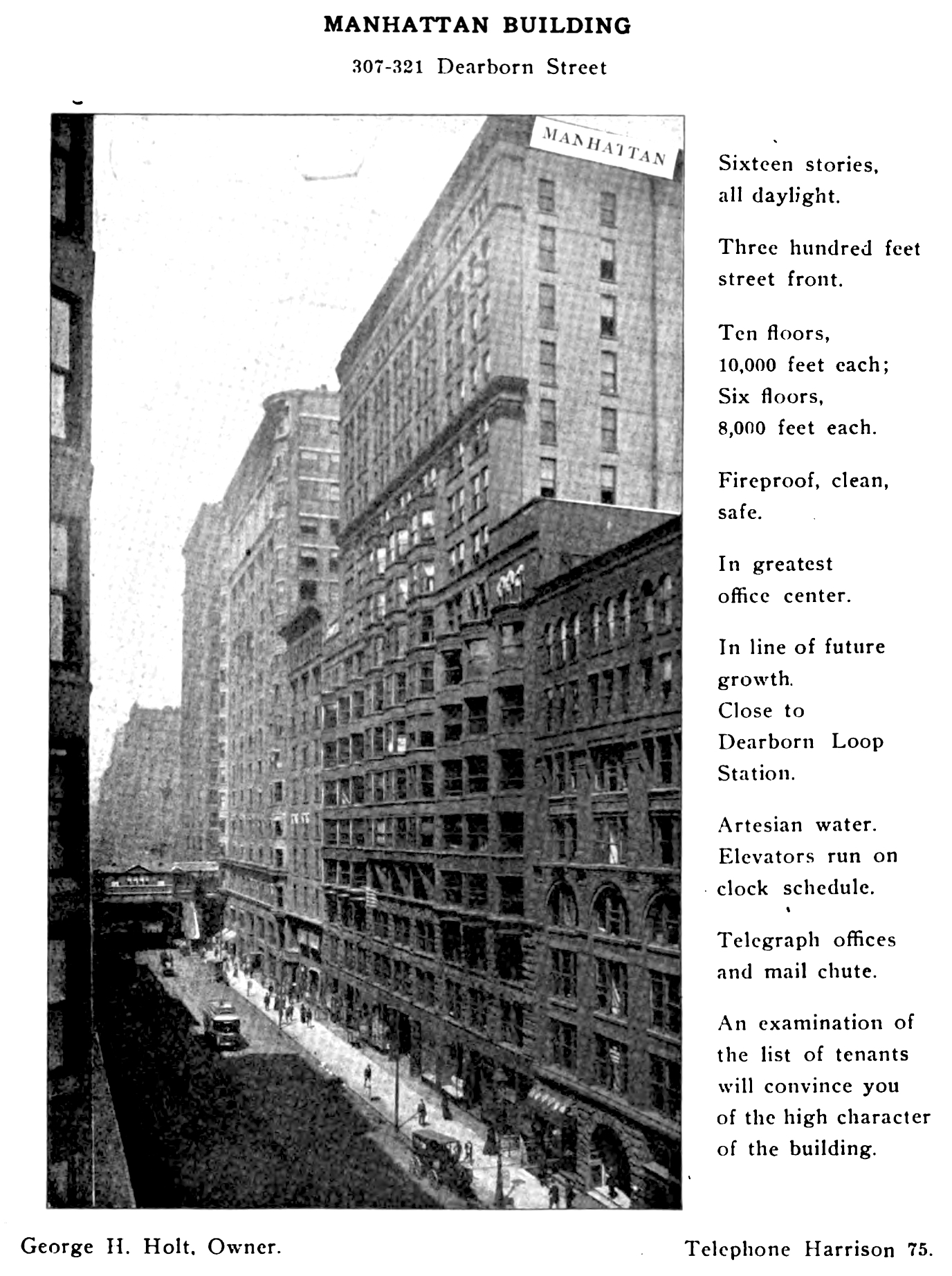 This colossal fire-proof structure overtops every other office building in the city by at least three stories. Being situated on the leading business and financial street in Chicago, near the Post Office, depots and Board of Trade, with which it is connected by pneumatic tubes, it promises to become a very popular structure. It has sixteen stories and basement of solid masonry and an inner frame of steel and iron, incased in terra cotta. The interior is embellished with ornamental bronze and antique copper, polished marble and jaspis wainscoting, mosaic floors and ornamental ceilings. The small amount of woodwork that enters into the structure is antique oak. The appointments as to elevator service, electric light, heat and general conveniences embrace every improvement known to modern science, and are unequaled by any building as yet erected in Chicago.

It is the oldest surviving skyscraper in the world to use a purely skeletal supporting structure and was the first 16-story building in the world. W. LeBaron Jenney was the architect. Louis E. Ritter was assistant engineer to Major Jenney. The permit was dated June 7, 1889.

There is one basement, and the building is supported on spread foundations with beam and rail grillages. The building is true skeleton construction, with no use of party walls, the north and south walls of tile being supported upon steel cantilevers carrying the load back to the first row of interior columns. The columns are of cast iron, and the beams and girders are of wrought iron with “no steel in the building, Bessemer beams being still too expensive.” It was the first building to recognize a system of wind-bracing as a necessity