The Tacoma Building is a remarkable steel structure at the northeast corner of La Salle and Madison streets, with frontages of 101 feet on Madison and 80 on La Salle. Its 13 stories are 165 feet high, and it has 4 stores and 156 suites of offices. Its 5 passenger elevators are under the charge of a chief, and carry 8,000 persons daily. It was erected in 1888, at a cost of $500,000, and is occupied by lawyers, real estate operators, and insurance agencies. It was the first building to discard heavy outer walls, and has a place in our chapter on “Notable High Buildings.” 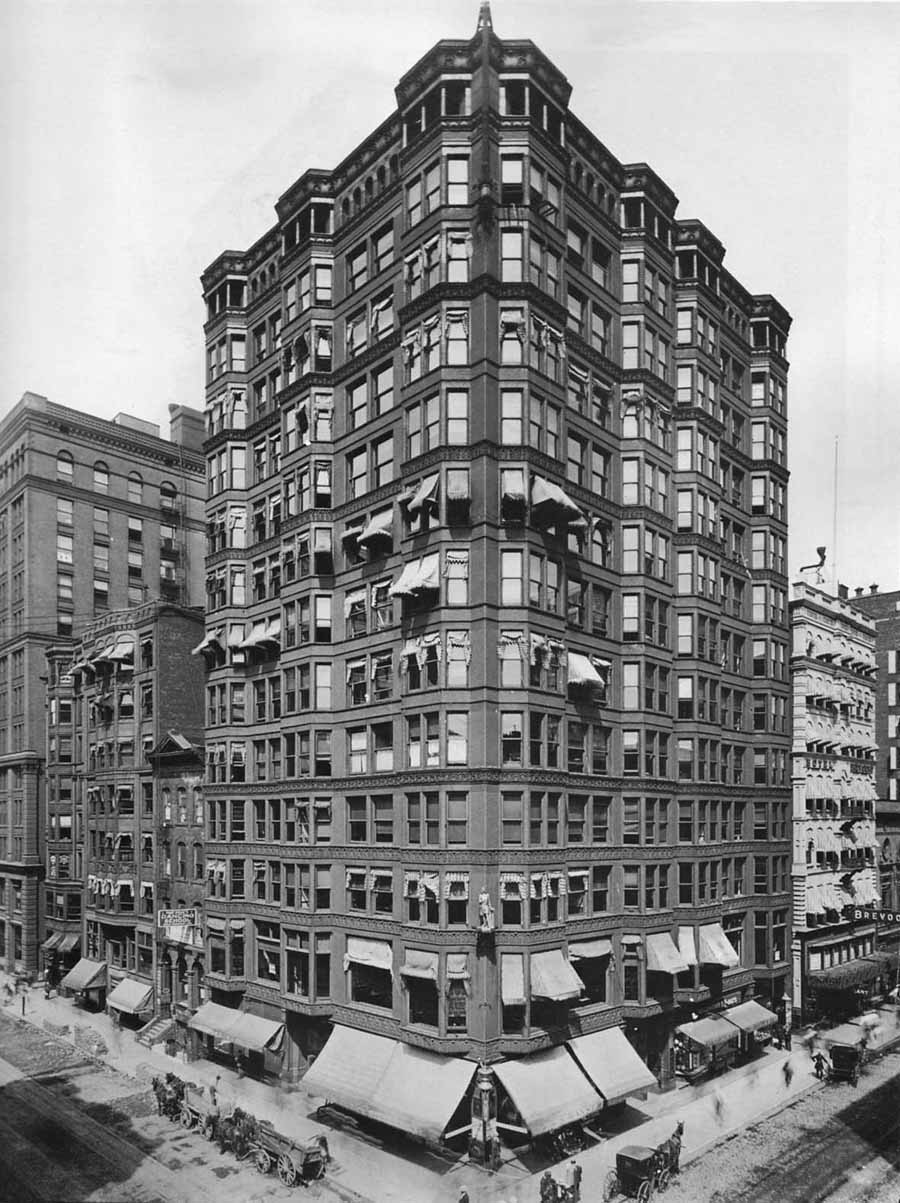 Notable High Buildings
The Tacoma Building stands at the northeast corner-of” La Salle and Madison Streets. This huge office block was the first of the notable buildings to abandon the thick outer walls of former days. It was also the first to include bay-windows, thus relieving the monotony of its fa9ades. On a hot afternoon, when the awnings of this building are all down, a striking sight is presented. The Tacoma probably offers one of the best examples of modern economy in building to be found in the business world. The dimensions of the lot were so small that center walls, formed like a cross, were deemed necessary; yet the very restrictions imposed on the architect enabled him to give to elevators and to tenants an unusual allowance of air and light. A chief of elevators has always stood on duty at the elevator cars, directing passengers and commanding the ascensions 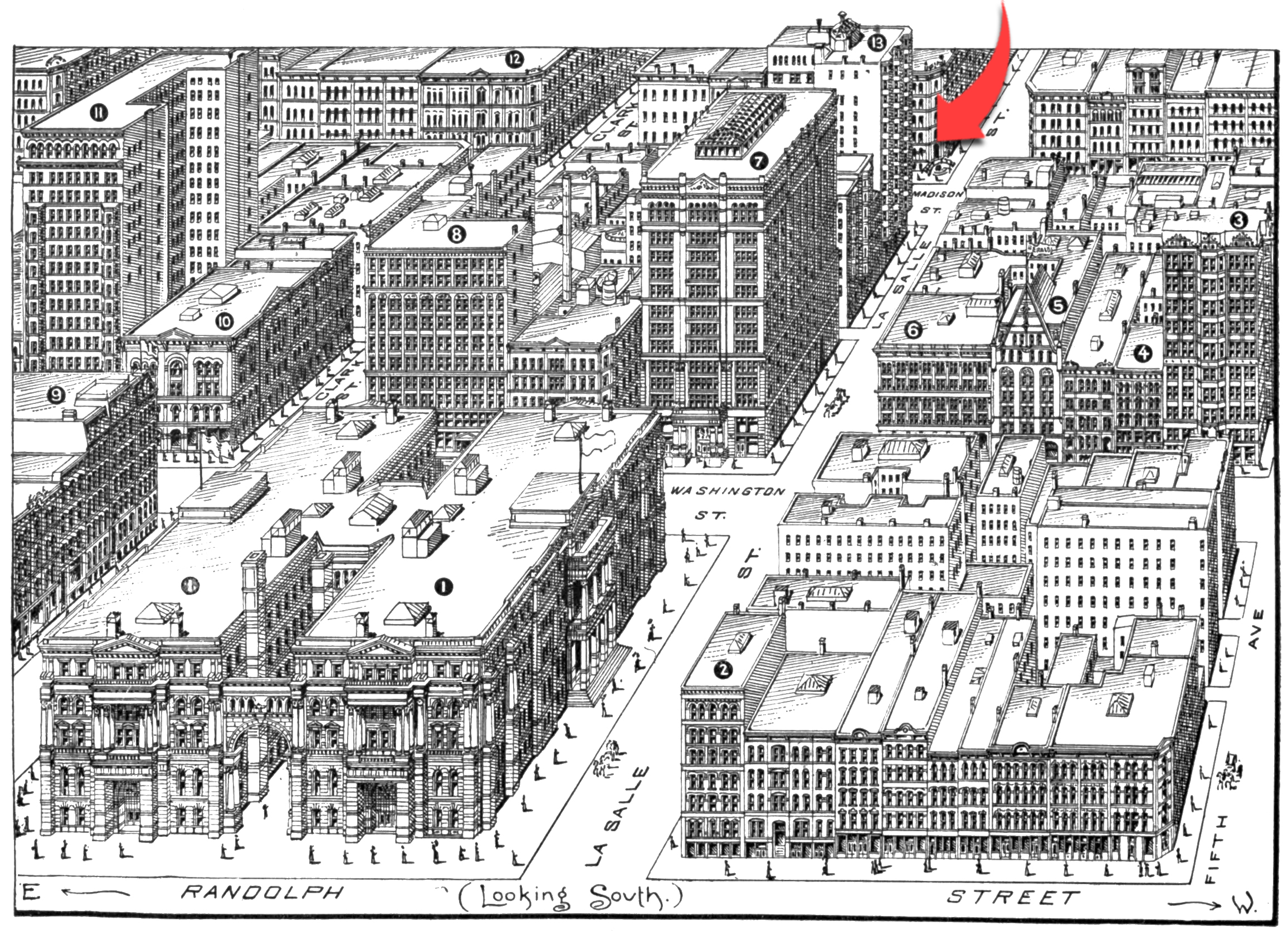 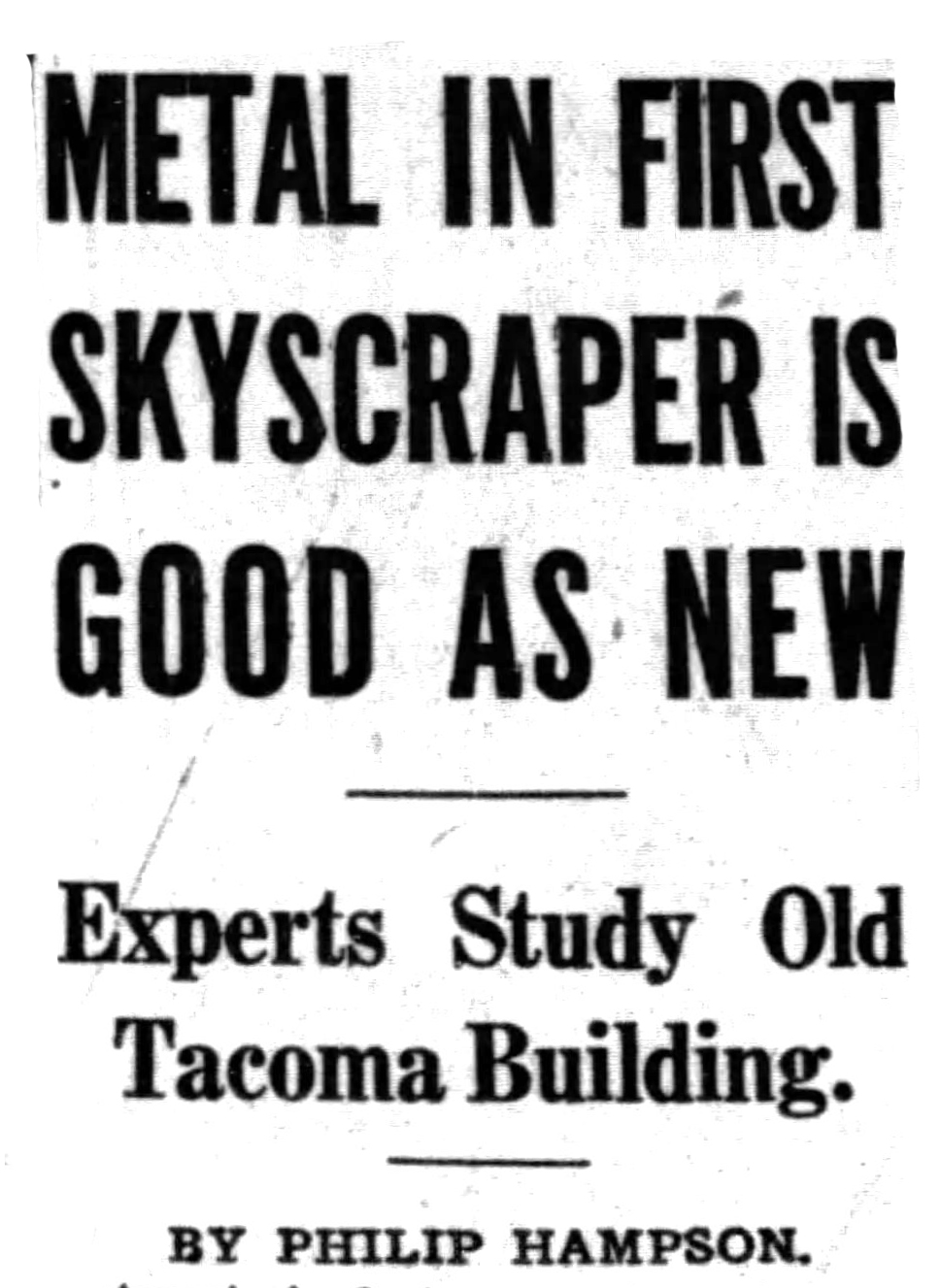 America’s first—or perhaps its second, as some experts maintain—skeleton constructed skyscraper which has outlived its economic usefulness structurally is as sound as it was the day it was completed. An examination of the Tacoma building—erected in 1887—which workers are now tearing asunder to make way for the forty-nine story One La Salle building reveals that its cast iron columns and steel beams are in perfect condition, capable of carrying on indefinitely.

Authority for the foregoing comes fom a trio of experts in whose company examination of the disappearing Tacoma building was made. One was W.P. Ruppert. job superintendent for the W.J. Newman company, which is razing the building. Mr. Ruppert has seen to the wrecking of numerous important buildings, among them many of steel skeleton construction. A second was T.C. Fredericks, a structural engineer with the engineering office of James B. Black. And the third was J.W. Rittenhouse, construction superintendent for John Griffiths & Son, builders of the new structure.

In inspecting the old building a stop was made on the second floor where a massive cast ion column was exposed for examination. This column was rib reinforced, with two inweb. There was not the slightest trace of crystallization or rust. “It’s as good as it was the day it went in,” Mr. Ruppert remarked. The column examined was typical of others in the building, except as the higher up in the building the columns were placed the smaller in diameter they were.

On the thirteenth floor, the top story, workmen were engaged in cutting away the metal work by means of acetylene torches. And here, with a considerable amount of metal skeleton work laid bare, was a good opportunity to note the effects of time on cast iron and steel. But so far as could be seen time’s effects were nil—the metal skeleton work was in perfect condition.

Some of the steel beams supporting the roof were somewhat rusted, but this was due to recent rains. The roof covering was torn away and the beams had been exposed to the elements for some days. On many of the steel beams the old code numbers put on them by their fabricators were plainly legible.

Cast iron columns were bolted together at flanges. Beams, too, were generally bolted to the columns, though there were some that had been hand riveted. One exterior rectangular column occasioned some comment from the 1929 experts by reason of lugs cast with the columns. These lugs undoubtedly were for the convenience of workmen in carrying the column.

Railroad rails entered into the skeleton through use as a framework for the balconies. Outside cast iron columns were protected by a heavy terra cotta covering.

Following the expedition to the top of the building, observation was made of one of the huge columns at the base of the building. This columns was rectangular in shape, roughly two feet nine inches by a foot, while the thickness of the metal was was one and three-eighths inches. This column also was in perfect condition, without any trace of wear.

This column would probably be typical of all others at the base, Mr. Ruppert said, inasmuch as there was even less likelihood of any ill effects in them than those at the top of the building for the lower columns were less subject to temperature changes than the upper ones.

Anyhow, the examination showed that the building was structurally sound through perhaps obsolete in the matter of 1929 conveniences. Further, it was too low to get a sufficient return on the extremely valuable land it occupied.

There has been considerable controversy as to whether the Tacoma building or the Home Insurance was the first skeleton skyscraper.

In its April bulletin the Illinois Society of Architects says:

Col. W.A. Starrett, one of the nation’s most prominent builders, in his Skyscrapers and the Men Who Build Them, gives precedence to the Home Insurance building. Col. Starrett after comment on the construction of the building, which was designed by W.L.B. Jenney says:

This Home Insurance building, the first of all skyscrapers, still stands at La Salle and Adams, originally ten stories, two more floors were added later. It was started May 1, 1884 and finished in the fall of 1885.

L.S. Buffington, Minneapolis architect and engineer, one of the pioneers in skyscraper efforts, credits the Tacoma building with more accurately fulfilling the modern conception of skyscraper construction, though he raises the doubt as to whether the Tacoma is really a skyscraper of today. Holabird & Roche in collaboration with Purdy & Henderson designed the Tacoma.

In conclusion we might say that the definition of a modern skyscraper is a building of metal skeleton construction whose walls are carried by the metal framework, the walls were merely forming a veneer or coat and not taking any part in carrying the weight of the edifices. 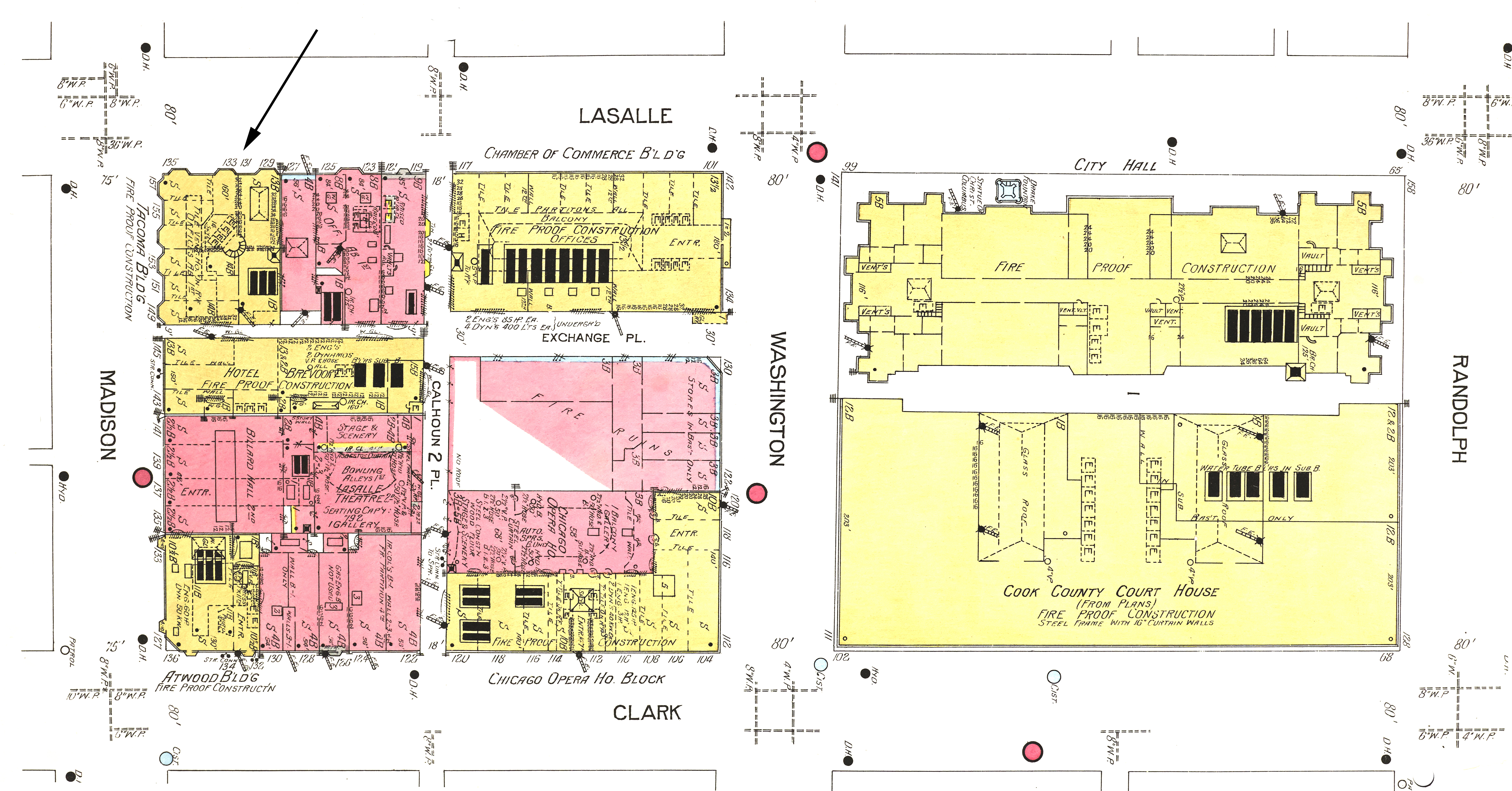