Another important sale was that of the Como Block, the office builsing Nos. 323 and 325 Dearborn street, fifty feet front running to Third avenue, midway between Van Buren and Harrison streets, which has been placed under contract to Walter C. Larned by C. C. Heisen, the construction being $175,000 for land and building. The block was erected by Mr. Heisen, being opened for tenants last May. The property now pays, gross, $17,500 per year. The construction of the building is of the best, having all the recent improvements in office-building construction. The building has a height of eight stories and basement. After May 1 next it is expected that the rentals will amount to $20,000 yearly. Mr. Heisen expects to build a fine office block on the vacant land adjacent to the Como Building on the north. It will be twice as large as the older building and fully equipped. Mr. Heisen, who is also the owner of the Temple Court Block, bought the land on which the Como Block stands five years ago from A. S. Trude. The negotiations between Mr. Heisen and Mr. Larned were carried on through Bryan Lanthrop for the grantor and F. P. Epps for the grantee. 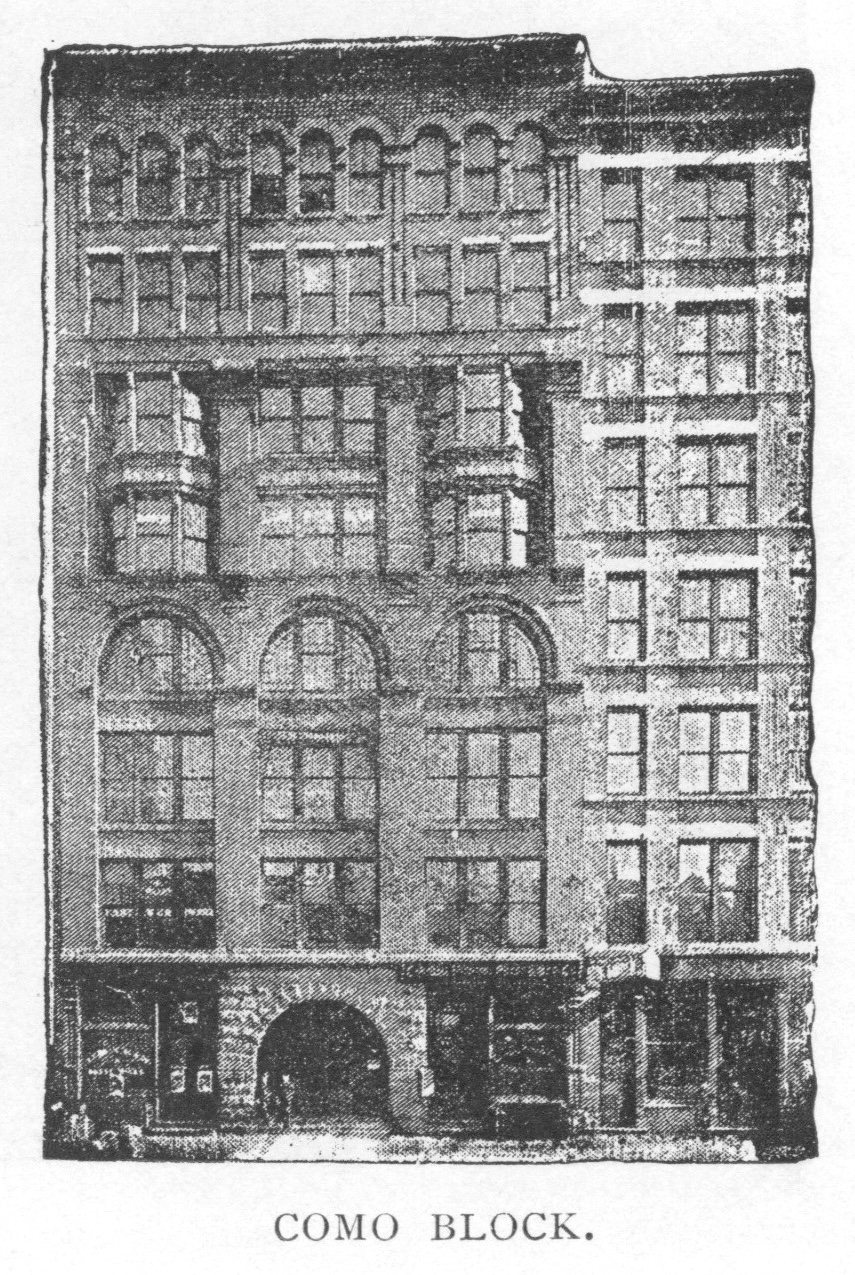 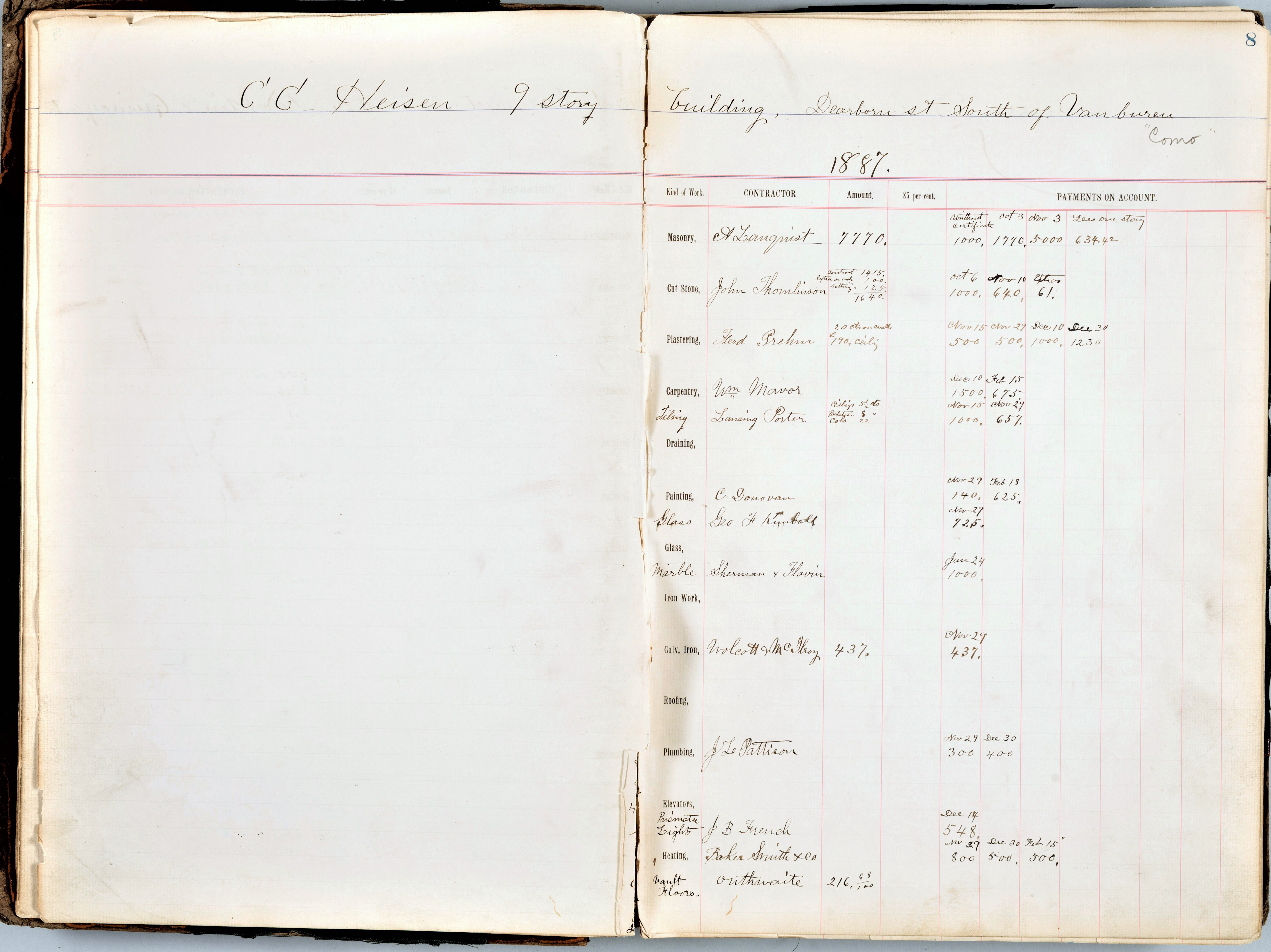 5. The Como Block,
At 323-325 Dearborn Street, has frontages of 40 feet on both Dearborn Street and Plymouth Place. It is 80 feet deep, 95 feet high, and is divided into 8 stories and basement. It was among the first of the better class of structures for publishers, and was built with steel frame and heavy walls of stone, brick, and terra cotta. There are 2 stores, 25 offices, and 2 passenger elevators. The building is occupied by printers, publishers, engravers, artists, and manufacturers’ agents. It was erected in 1888. 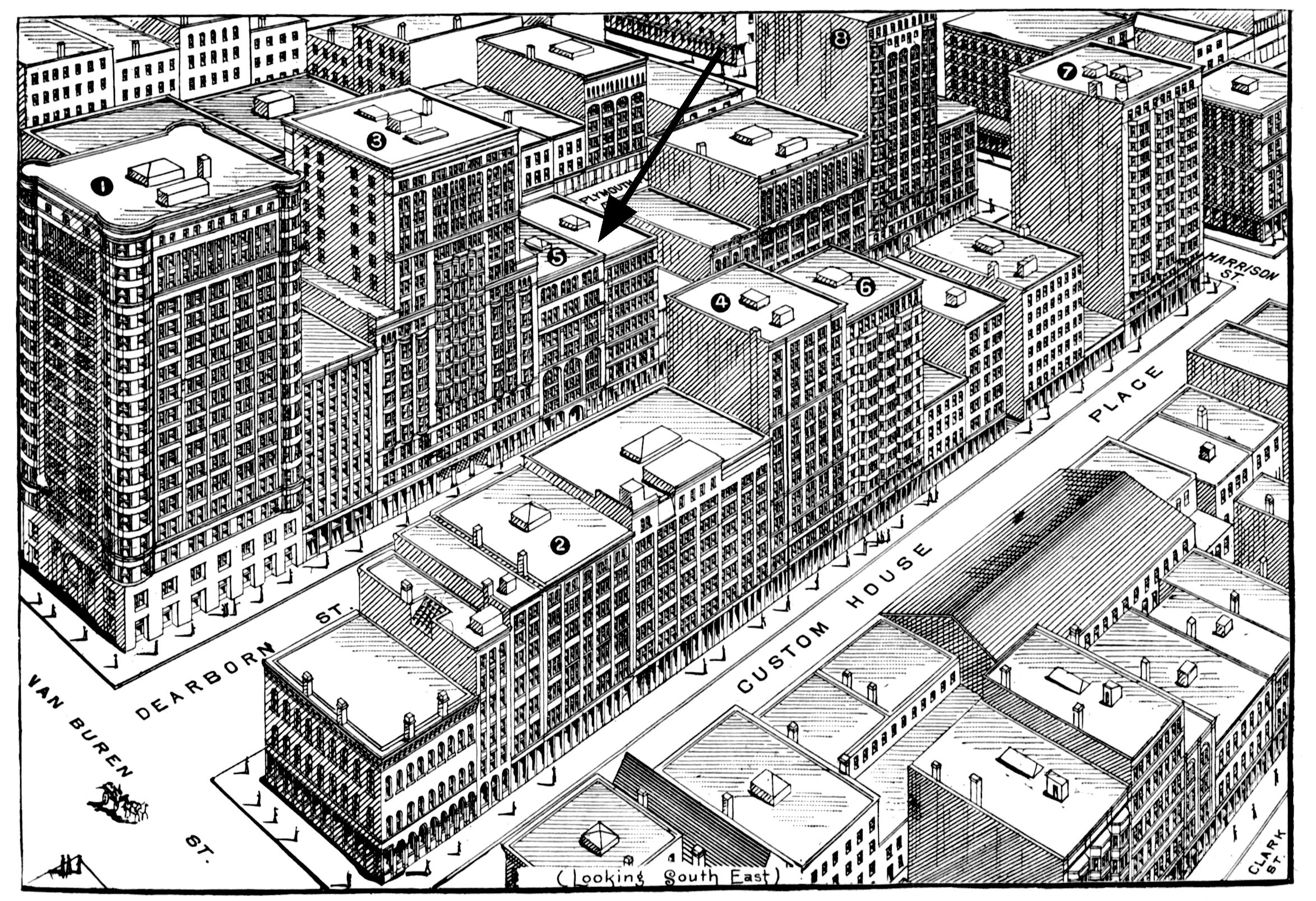 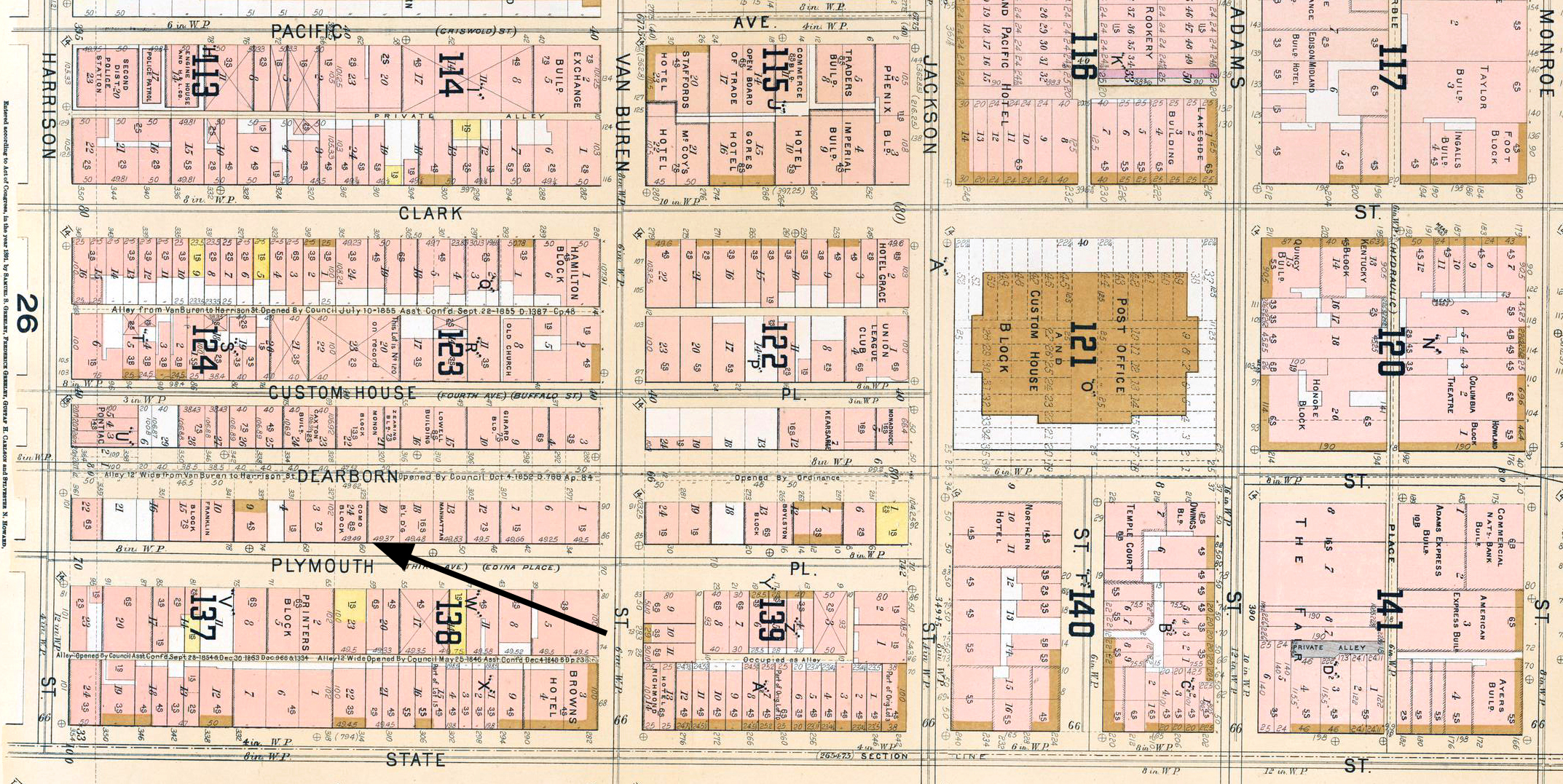 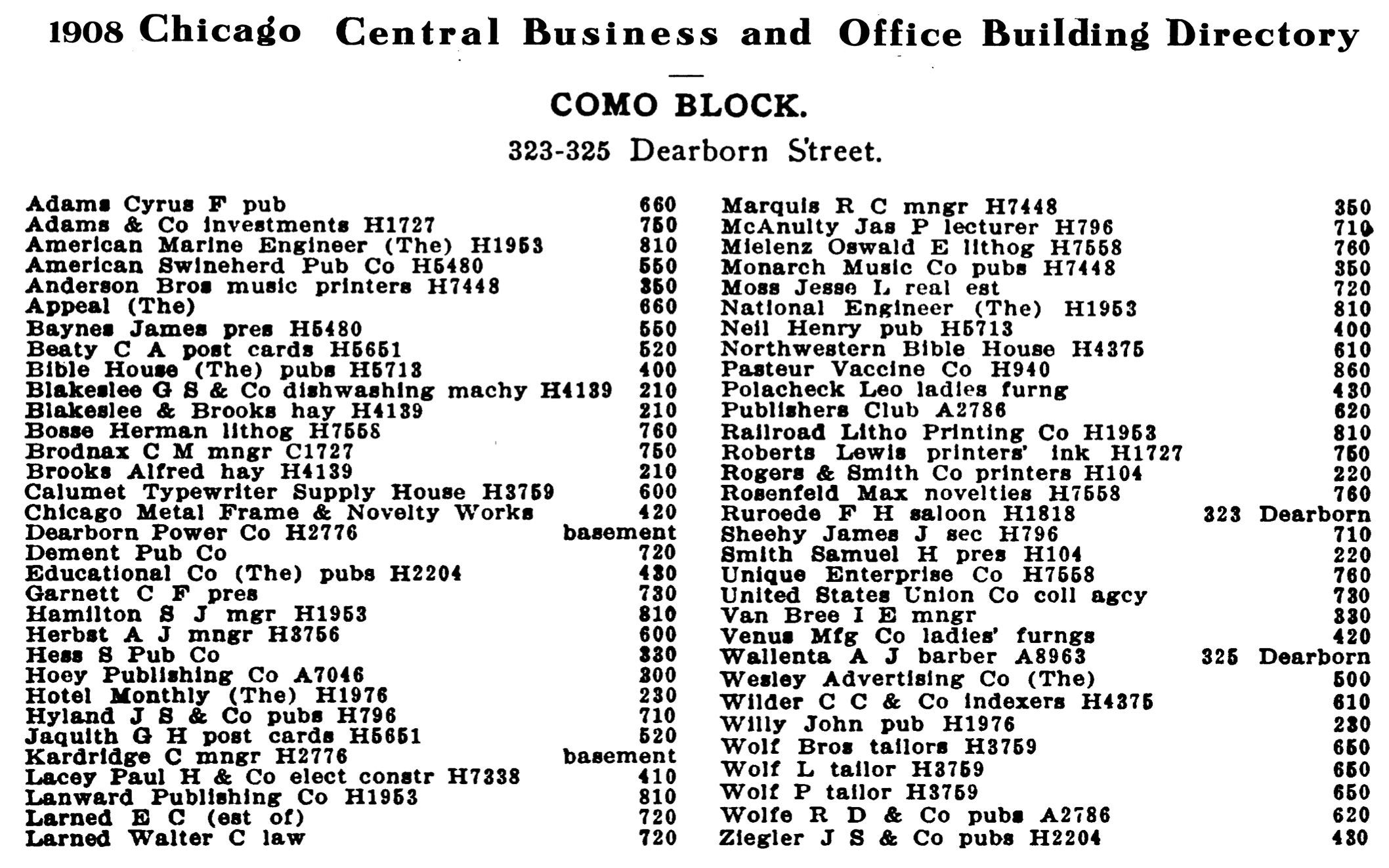