Office building for Mr. C. C. Heisen, corner Dearborn street and Fourth avenue, Chicago; J. M. Van Osdel & Co., architects. Frontage on Dearborn street, 73 feet, on Fourth avenue, 67 feet; twelve stories high. First three stories of Dearborn street front to be of buff Bedford stone ; above this to be of gray Anderson brick with Bedford stone trimmings ; bays to be of brick, and to be topped with copper. Fourth avenue front to have first two stories of iron, and all the rest brick with stone trimmings. The entire building is to be fireproof. The building is to be equipped with three elevators, steam heat, electric light, and all the appointments of a first class modern office building. 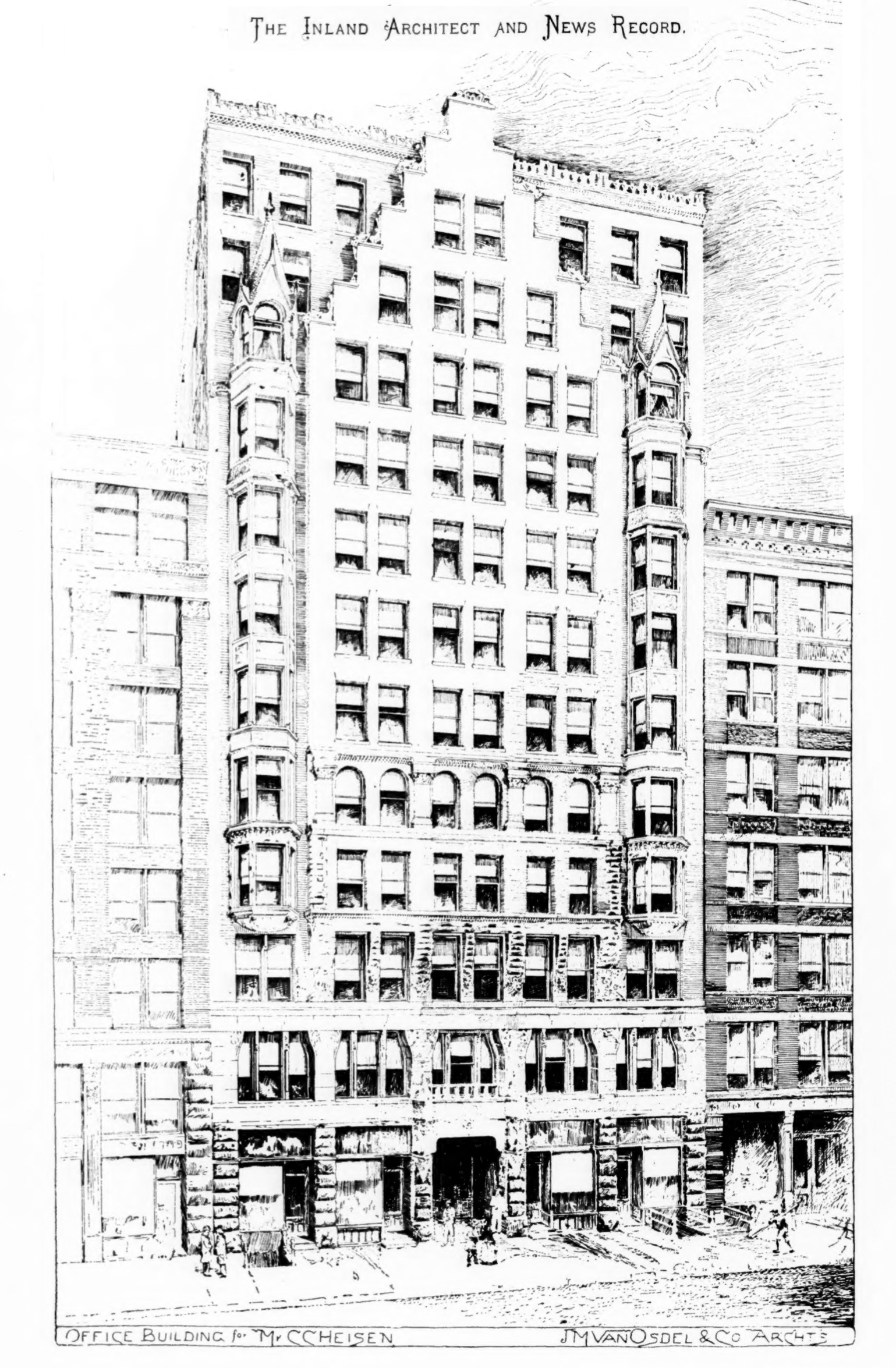 An unusual decorative cornice of rectangular tracery ran behind the gable at the top. Its pattern consisted of 3 short rectangles alternating with one tall rectangle. The top of the building had a Germanic stepped gable, projected as a front layer about one foot over a recessed facade. This was flanked by spiked hoods over the 2 bay windows, which ran up the north and south sides. The lower three stories were clad in rusticated stone, and the rest of the facade in brick.

This building was condemned and removed by the Department of Subways and Superhighways, City of Chicago when Congress Parkway was extended through the block. The site is currently the south end of the block between Dearborn, Federal, Congress, and Van Buren. 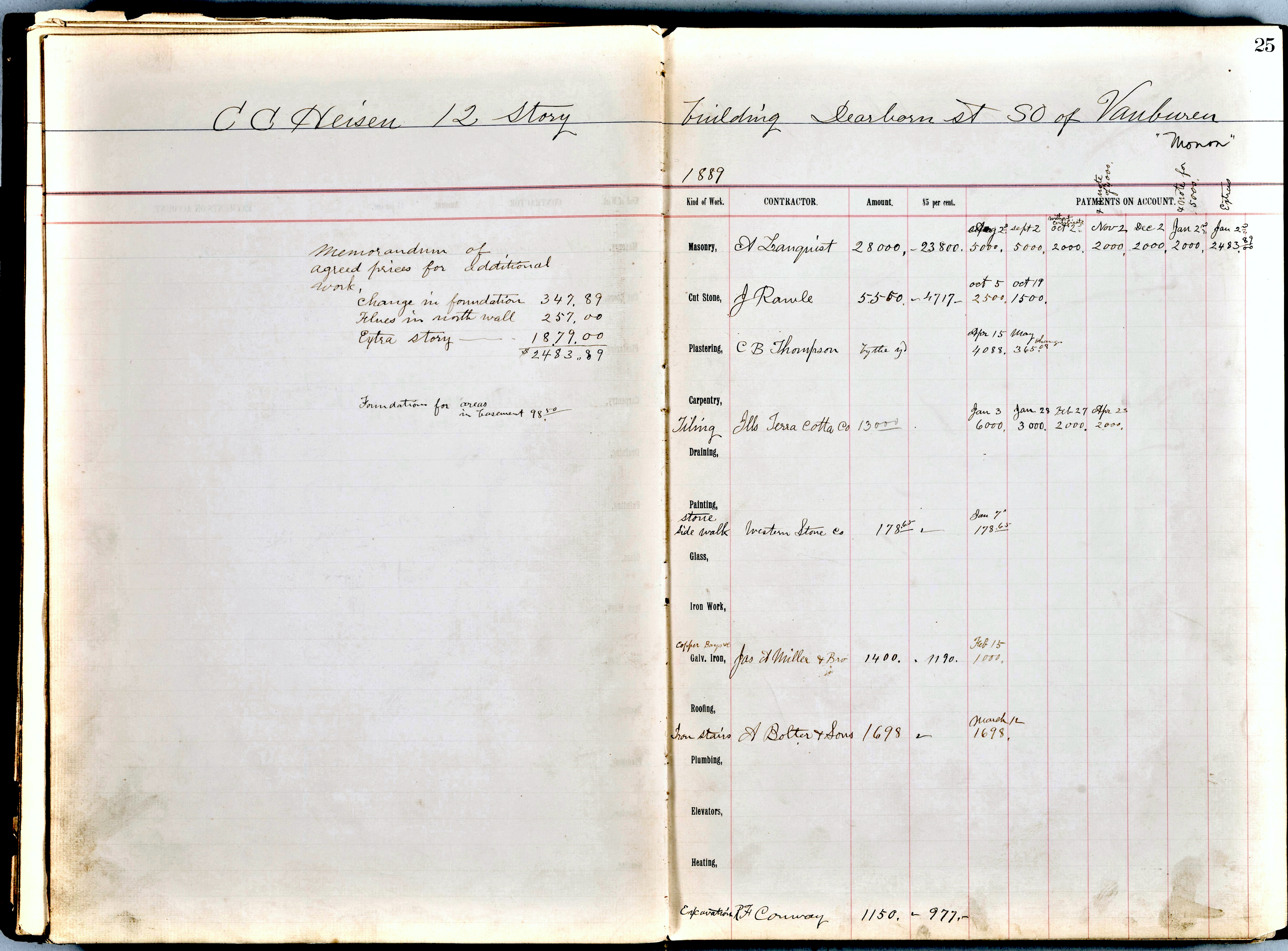 The Monon property consists of 74 feet of frontage on the west side of Dearborn street, 325 feet south of Van Buren street, running through to Fourth avenue, or Custom House place. The building is thirteen stories high, well constructed after the modern fashion. The Zearing property adjoins the Monon on the north, with frontage of twenty-five feet, covered with a five-story building.

By these transactions a value of nearly a $3,000 per foot is shown for the property. This represents an advance in fully as great proportion as that shown everywhere else in the business district.

The Thayer estate makes a good purchase, as it owns the Lowell Building with 100 feet of frontage adjoining the Zearing property on the north. With the new purchase, 200 feet in an unbroken line, is now comprised in this ownership. 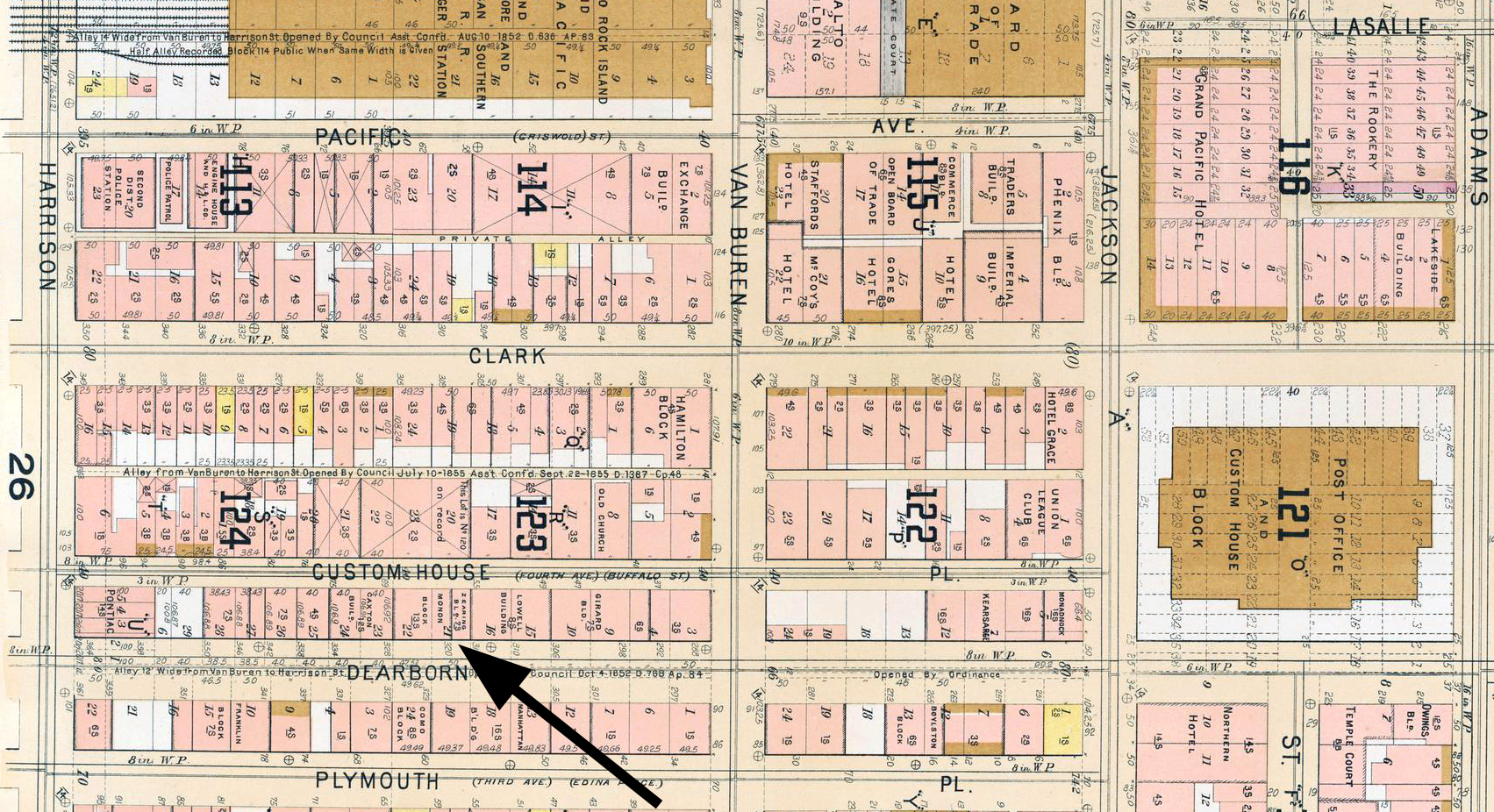 The Monon Building,
At 320-326 Dearborn Street, extends through to Custom House Place, with frontages of 75 feet. It is 67 feet deep and 160 feet high, in 13 stories and basement. It is one of the fine high steel buildings of New Chicago, and was built principally for the general offices of the ” Monon ” Route. There are 4 stores, 125 offices, and 3 passenger elevators. The exterior is of brick and terra cotta, the interior, steel and tile. Patent lawyers and publishers fill the offices which are not occupied by the railroad company. The Monon was erected in 1890 at a cost of $285,000.

Printing-house Row, from Van Buren Street.
The page (below) portrays faithfully the extraordinary double row of high buildings which lines Dearborn Street between Van Buren and Harrison streets. This is Printing-house Row so called from the large number of printing-offices included within its limits. Among the high structures of this group, described elsewhere, are the ① Old Colony, the ② Girard, the ③ Manhattan, the ④ Monon, the ⑤ Como, the ⑥ Caxton, the ⑦ Pontiac,, and the ⑧ Ellsworth. 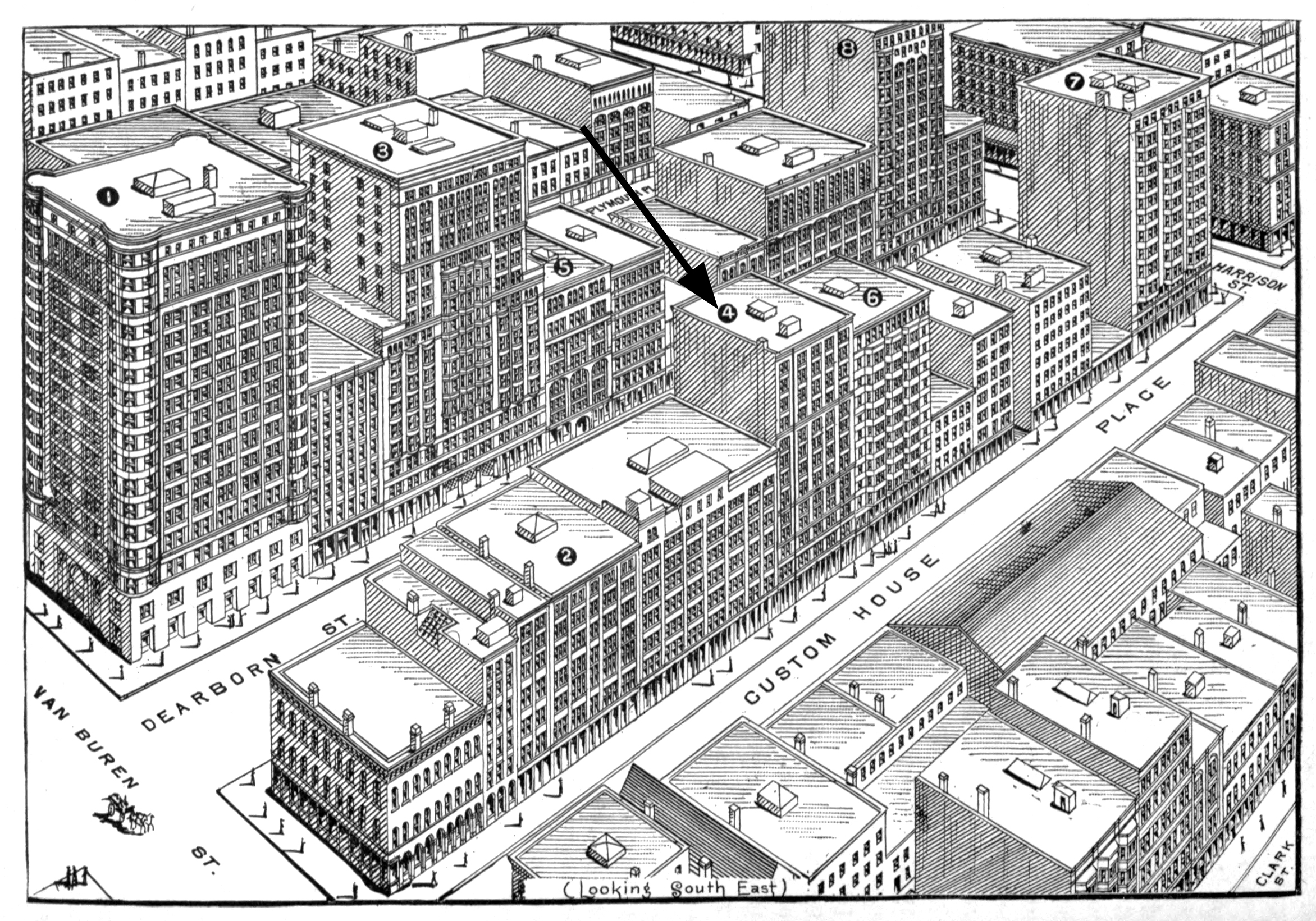 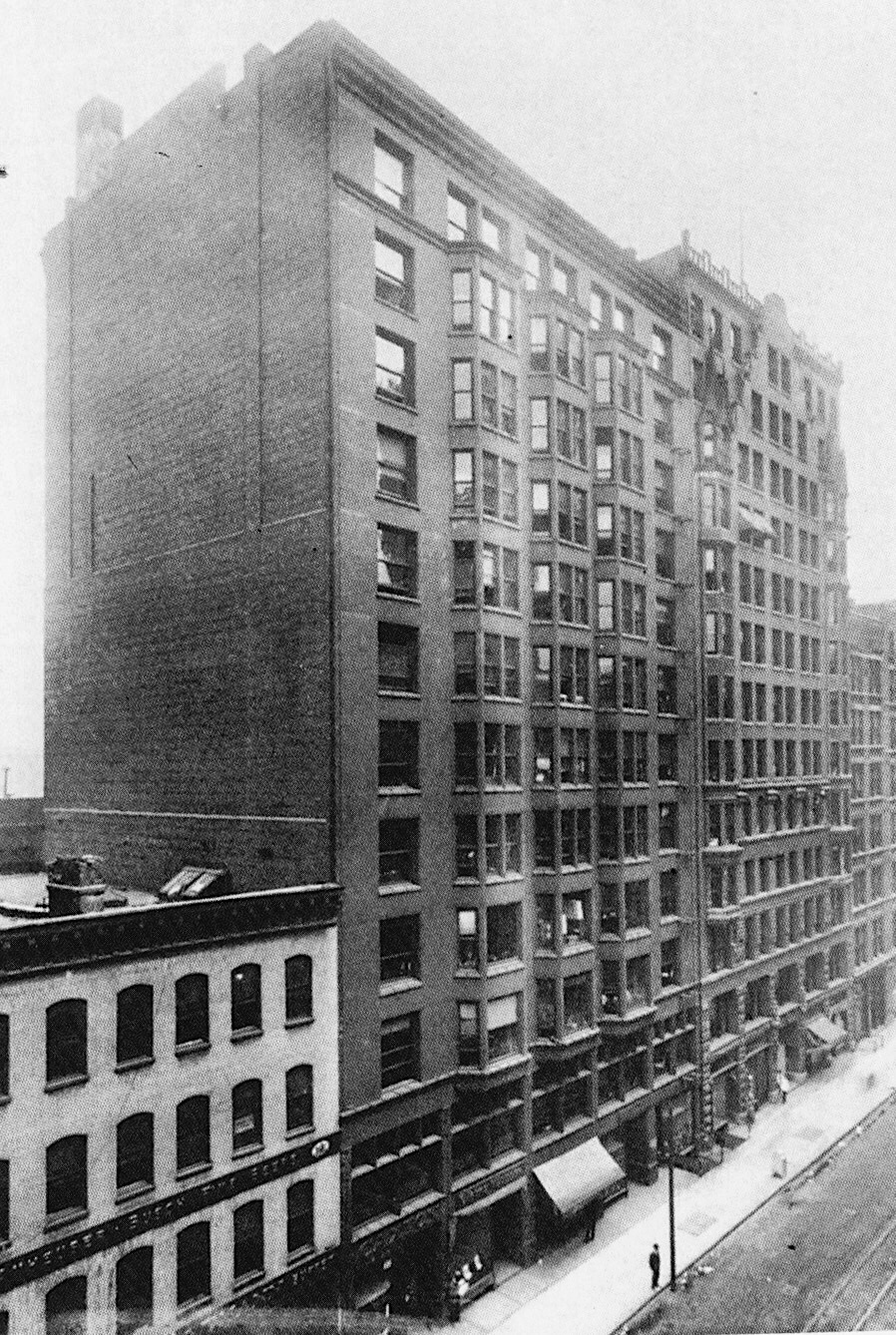 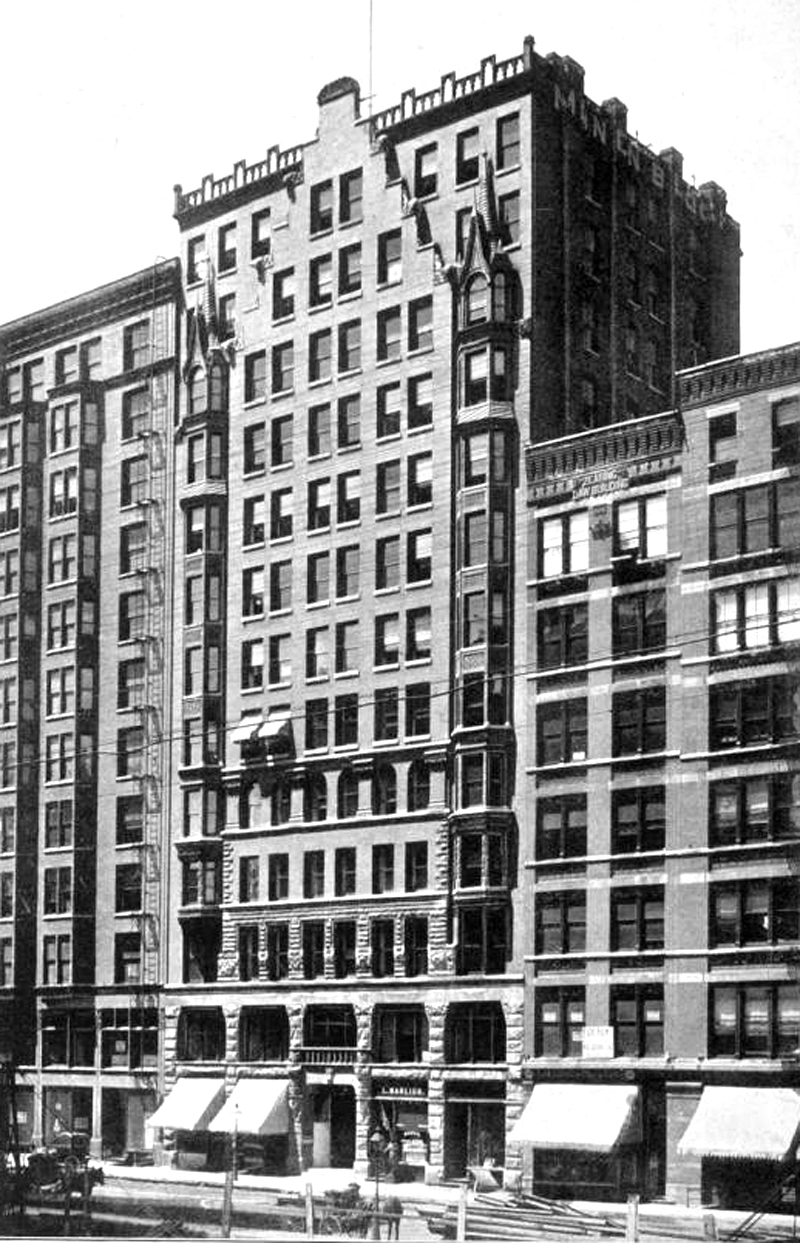 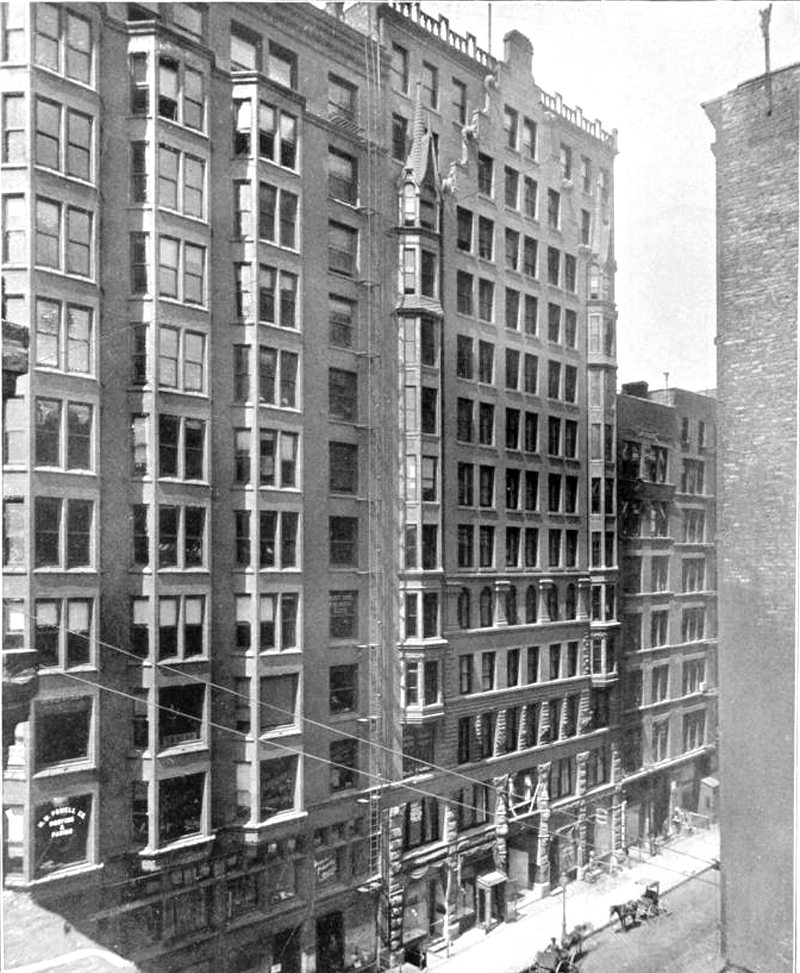 The Thirteenth Story
There was an ironic note about the death of Henry Ericsson, the veteran builder. The old Monon building on Dearborn st., for which he had been the contractor, was the first ever to reach a height of 13 stories when skyscrapers carried their weight on their own walls.

The 13th story, defying superstition, was a carefully kept secret in the earl days of construction. Its addition was announced at the last moment. Ericsson was still in his 20’s when this landmark, last work from the drawing board of Chicago’s “first architect,” John M. Van Osdel, was completed.

On the day Ericsson dies, the Monon building again was only 12 stories high. It is being dismantled, because it stands in the path of the projected Congress st. highway. The 13th story has vanished; the 12th gapes open to the sky.

Two other Ericsson monuments remain on Dearborn st.—the 16-story Manhattan building, which followed the Monon by a few months, and a modest four-story red brick pile (510-14 S. Dearborn), constructed for Carter Harrison I in the ’80s.
—Bill Leonard