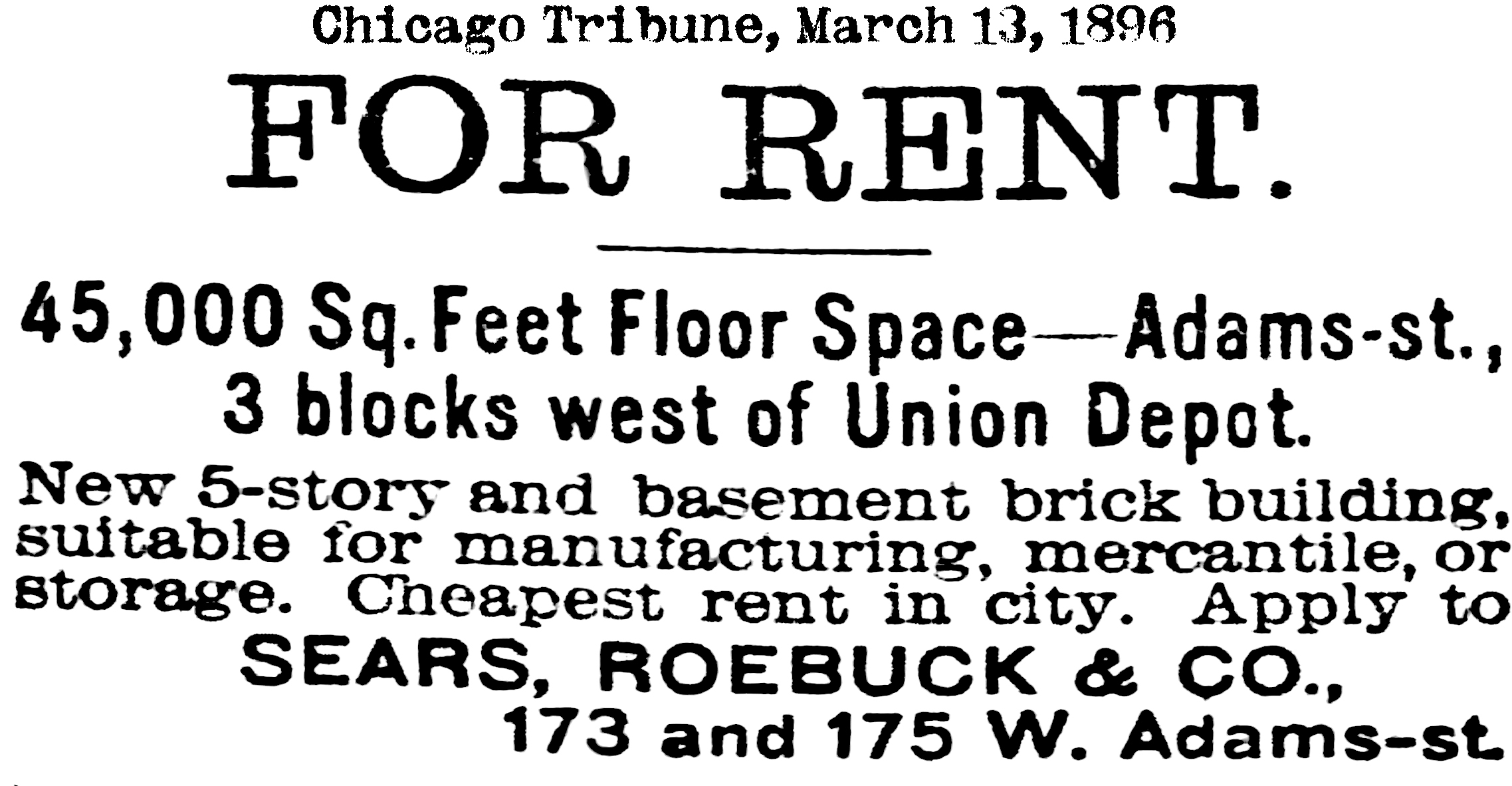 Richard Sears first moved his mail order company from Minneapolis to Chicago in late March 1887. The R.W. Sears Watch Company occupied a building at 55 Dearborn Street, north of Randolph Street. Sears returned to Chicago in 1892 by opening an office on West Van Buren just east of Halsted. Shortly after this he moved the offices into a five story building at 173-175 West Adams Street just east of Halsted.1

Sears, Roebuck and Co. outgrew that building and the company moved to the Enterprise, Power, Light and Heat Co. building at the corners of Fulton, Des Plaines and Wayman Streets on March 17, 1896. Repeated expansions and remodels of this building occurred over the next 6 years. 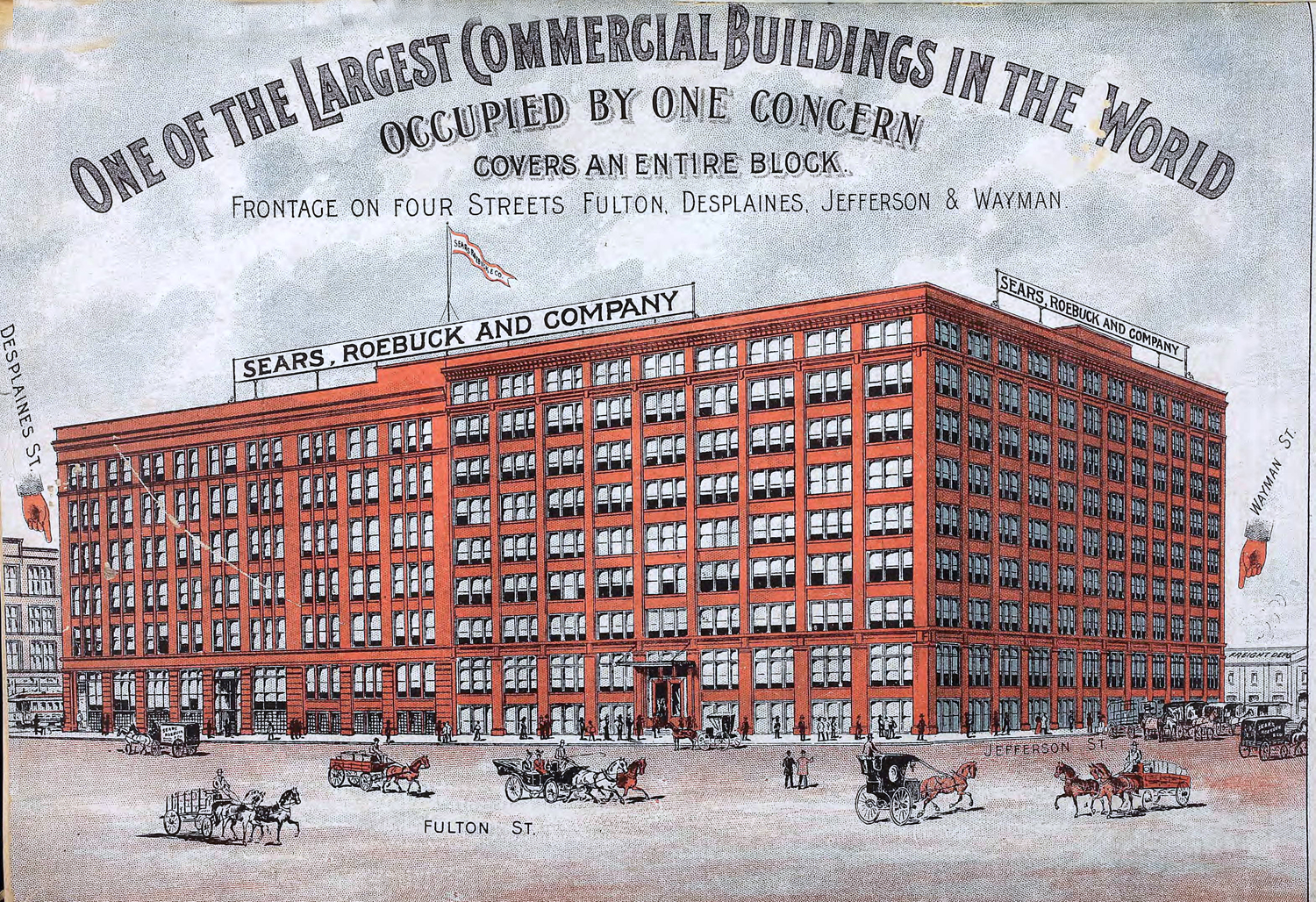 The Enterprise, Power, Light and Heat company yesterday took out a permit to build a seven-story and basement brick side addition to 82, 84, and 86 Fulton avenue, to cost $150,000.

Power Plant Purchased.
M. D. Coffeen has acquired for $220,000 the grounds and plant of the Enterprise, Power, Light and Heat company, of which he was the projector. The plant is located at Desplaines and Fulton streets. Mr. Coffeen secured his title through a purchase from John Spry. Mr. Spry had purchased from the estate of John K. Russell. The company gave Mr. Coffeen a quitclaim deed to all of its interests for $50,000. 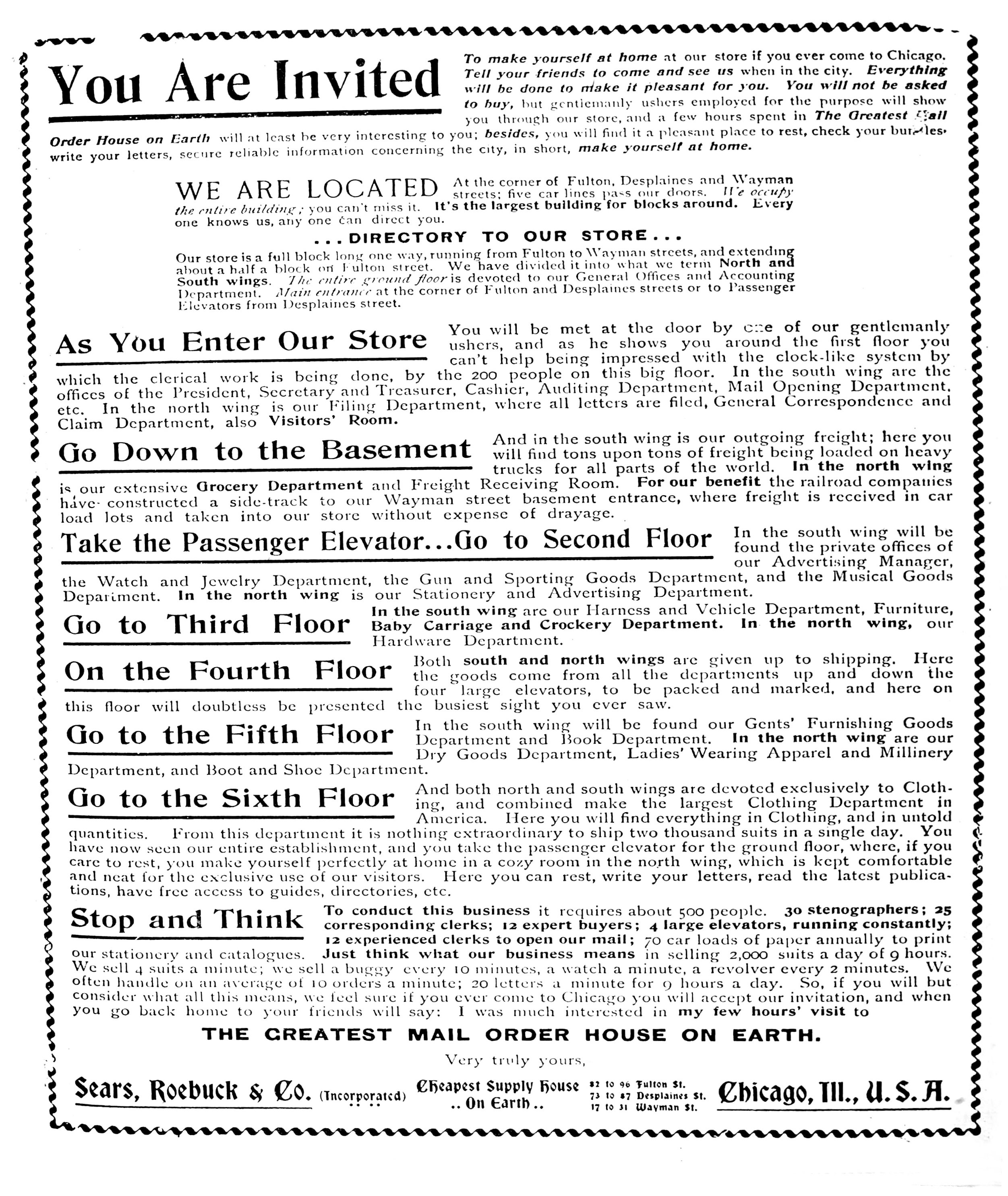 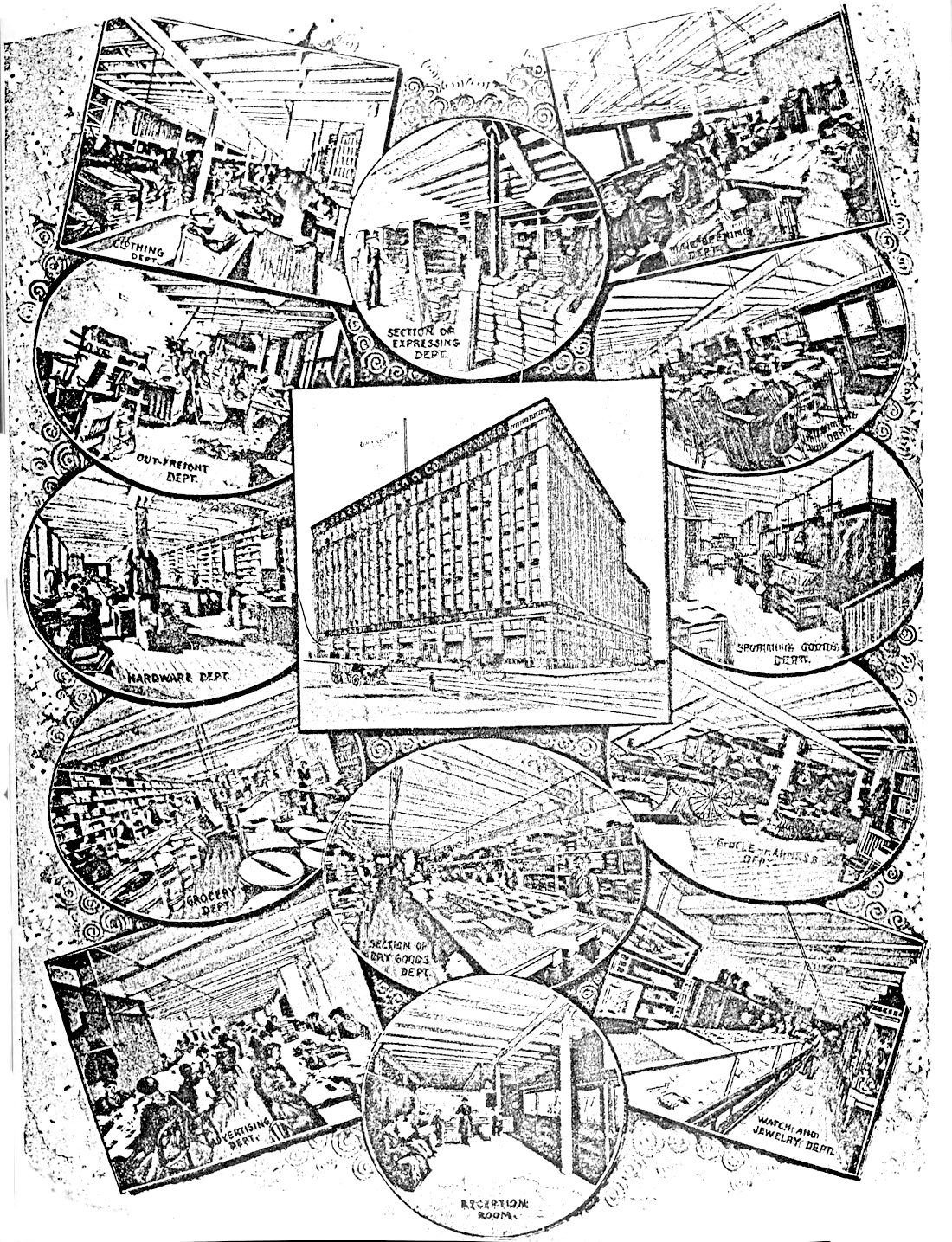 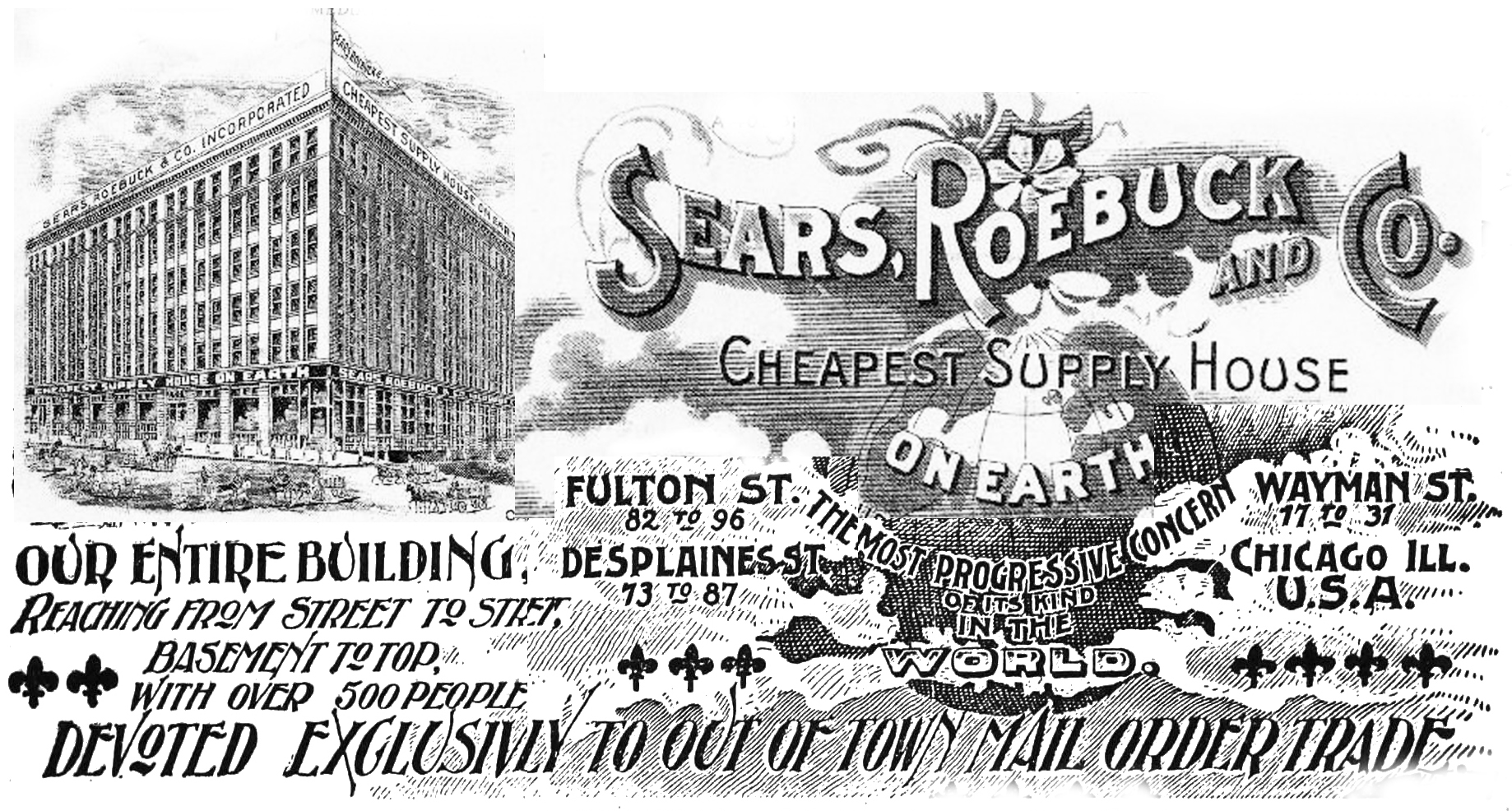 Circumstances point to Sears, Roebuck & Co. as the purchasers of the ground at the northwest corner of Fulton and Jefferson streets from J. Harley Bradley of the Bradley Manufacturing company. It was sold two weeks ago for $125,000, but the name of the purchaser was not given out at that time. A building is to be erected costing $200,000. 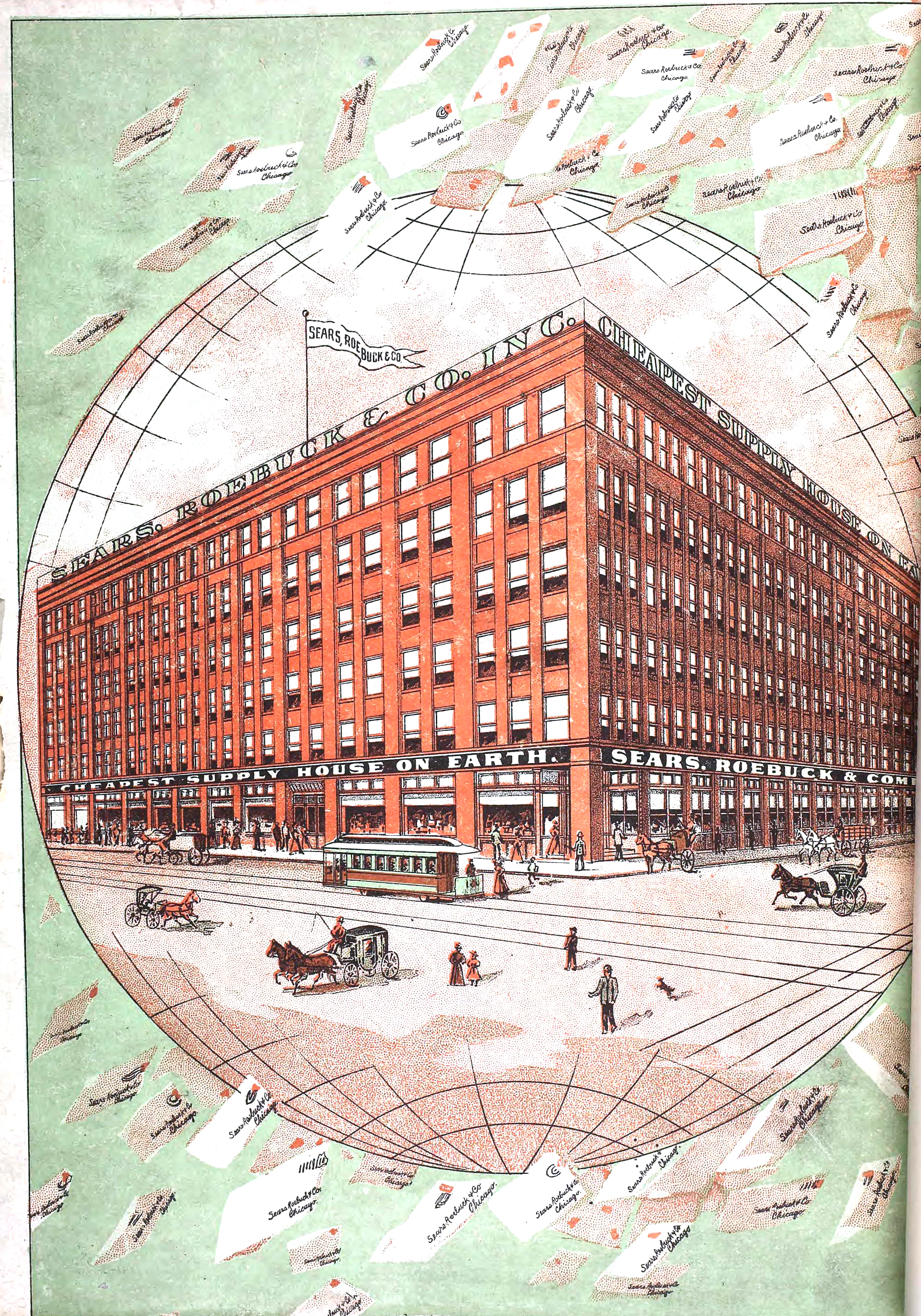 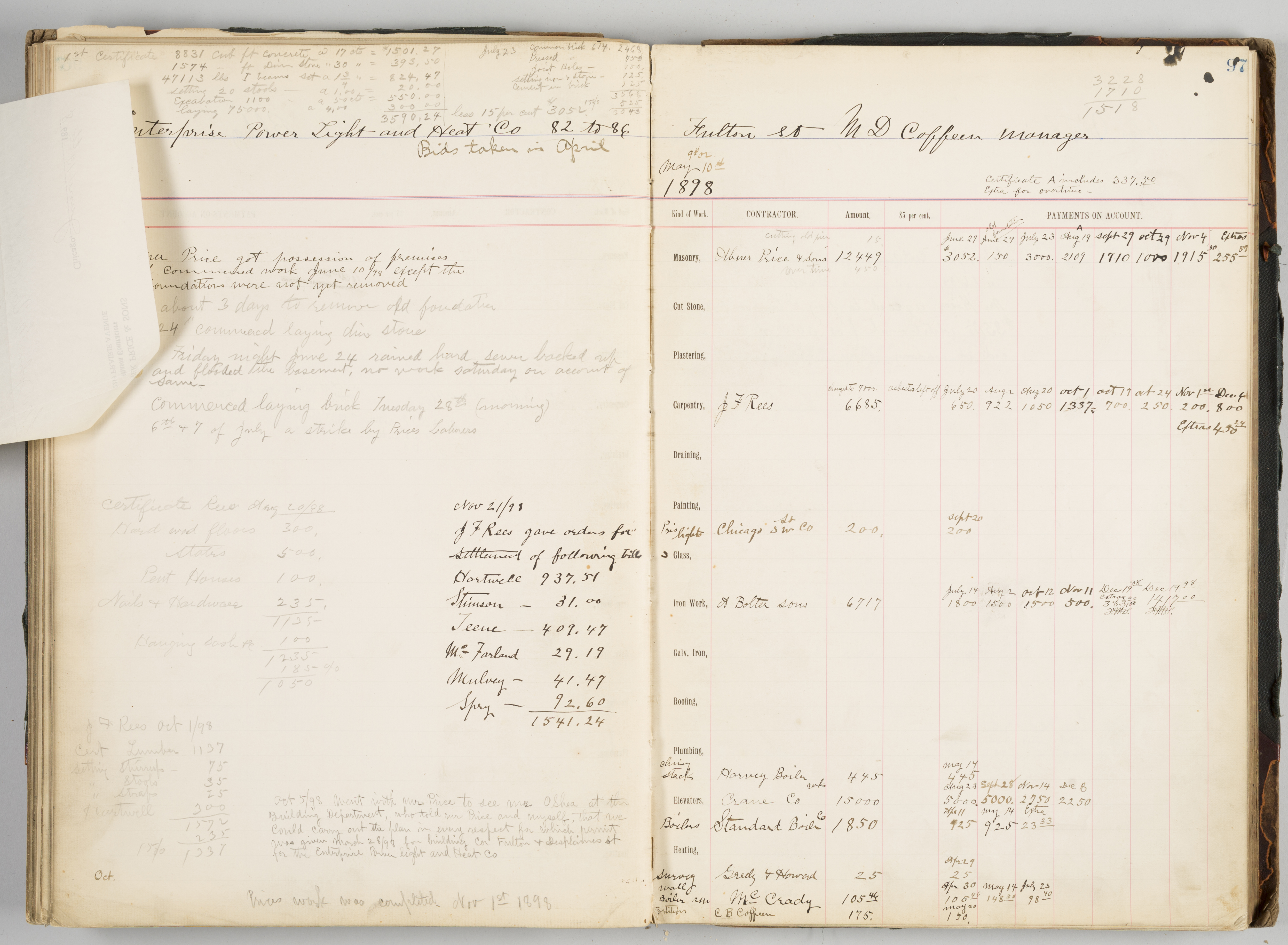 Account Book of John Van Osdel showing details of the expansion of the Enterprise Power, Light and Heat Co. in 1897-1898 at 82-96 Fulton Street.

Sears, Roebuck & Co. Buy.
One of the interesting transactions of the week was the purchase by Sears, Roebuck & Co., from the Crane company, of 90×170 feet at the northwest corner of Fulton and Desplaines streets, 120 feet west of Desplaines, for $126,500. The property is opposite the Sears-Roebuck plant, and its purchase marks the acquirement by the latter of the entire block bounded by Fulton, Wayman, Desplaines, and Union streets.

Just what the company’s plans are in connection with this property are not known, and, according to Mr. Loeb, the manager, it has none. It is said that the original plan was to build a great warehouse covering the entire block, but, convinced that it would not be large enough for its business needs, the company is said to have abandoned the project and decided upon the great plant now in process of construction on Harvard street. 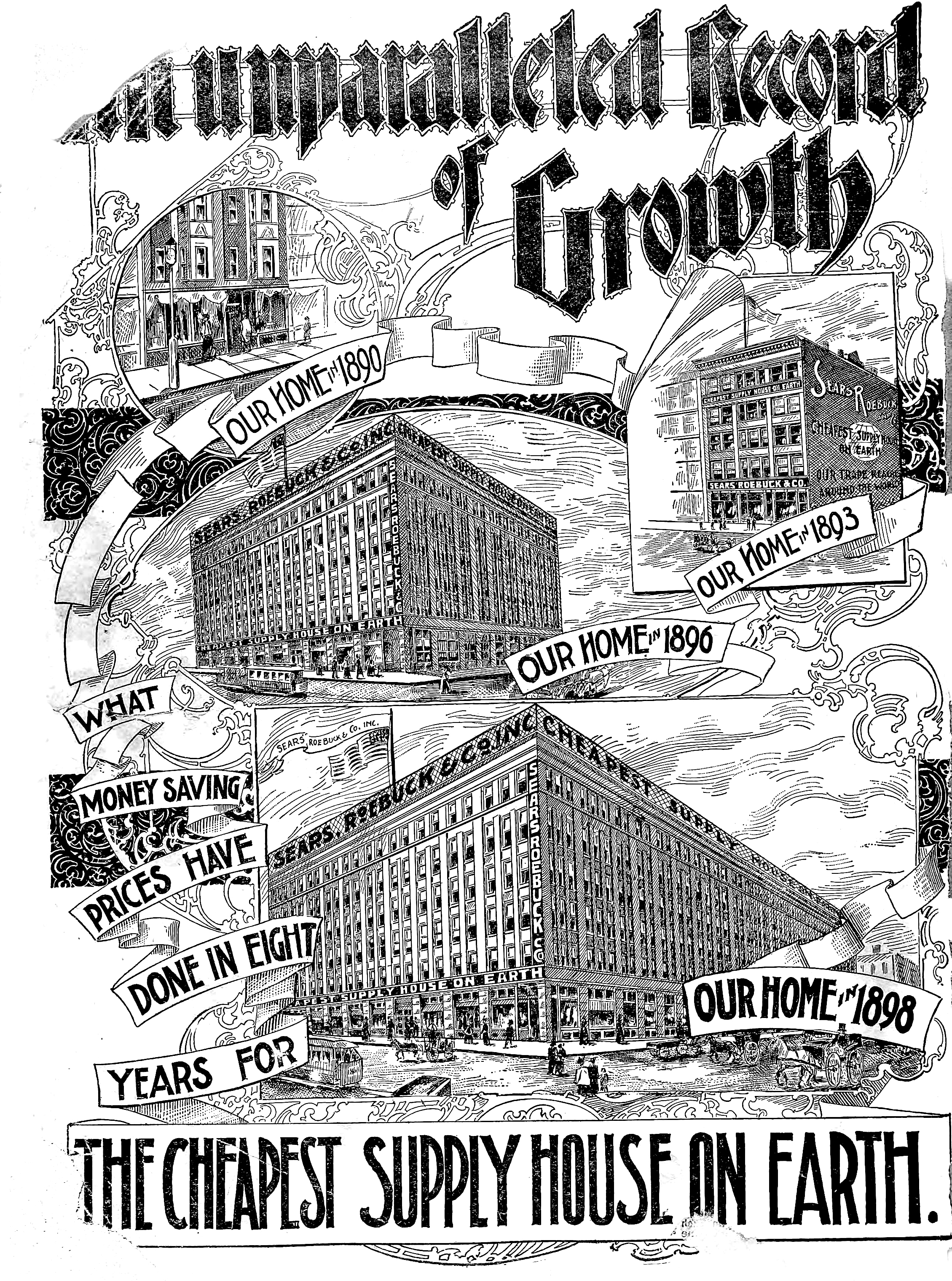 A pictorial of early Sears buildings.
In 1893 Sears rented a building on Adams street, then in 1896 moved to the Enterprise Building on Fulton & Desplaines, which was expanded several times. 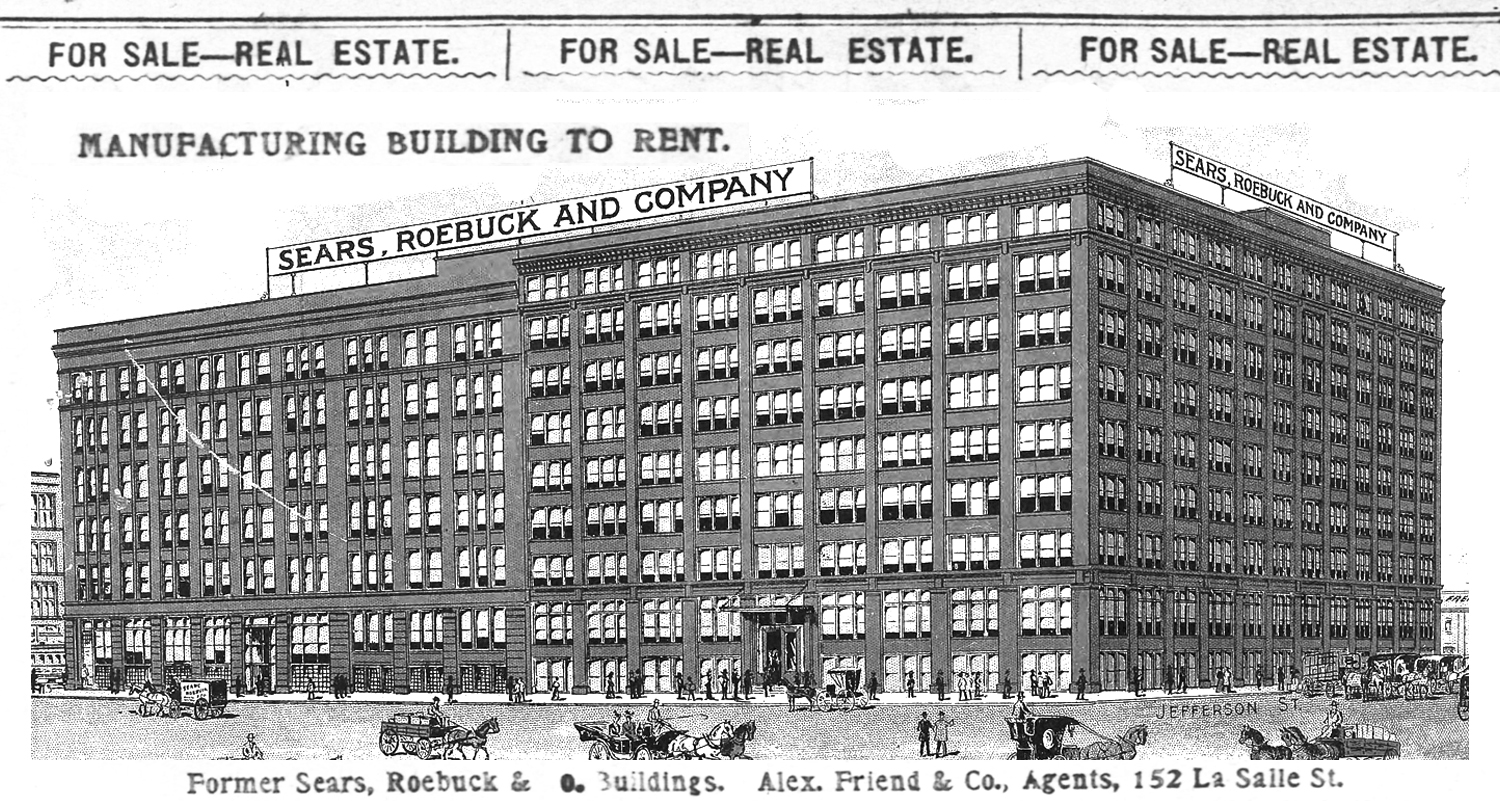 These large manufacturing buildings were constructed by Sears, Roebuck & Company for their own use, but as they have outgrown these quarters, they wish to divide and rent same for high quality manufacturing, mercantile, and warehouse purposes. They are the most complete factory properties on the West Side, are located just one-half mile west of the city hall, and are in easy access to all freight and passenger depots and all transportation lines. The buildings front 320 feet on Fulton street with a side frontage of 170 feet on Desplaines and 170 feet on Jefferson street and a rear frontage of 320 feet on Wayman streets. These four street frontages give the buildings a total frontage of 980 feet, affording unusual opportunities for light, fire protection, shipping facilities, and advertising, as they overlook the C. M. & St. O., Pan Handle, and Chicago & Northwestern R. R. passenger tracks, and both the Desplaines and Milwaukee avenue viaducts over which all the Northwest Side surface cars pass going to and from their terminus.

The buildings are of mill construction and contain an aggregate of about 500,000 square feet of floor space and are equipped with automatic sprinklers and a most modern power plant.

Power, heat, electric light, and use of electricity will be furnished to tenants requiring this service. 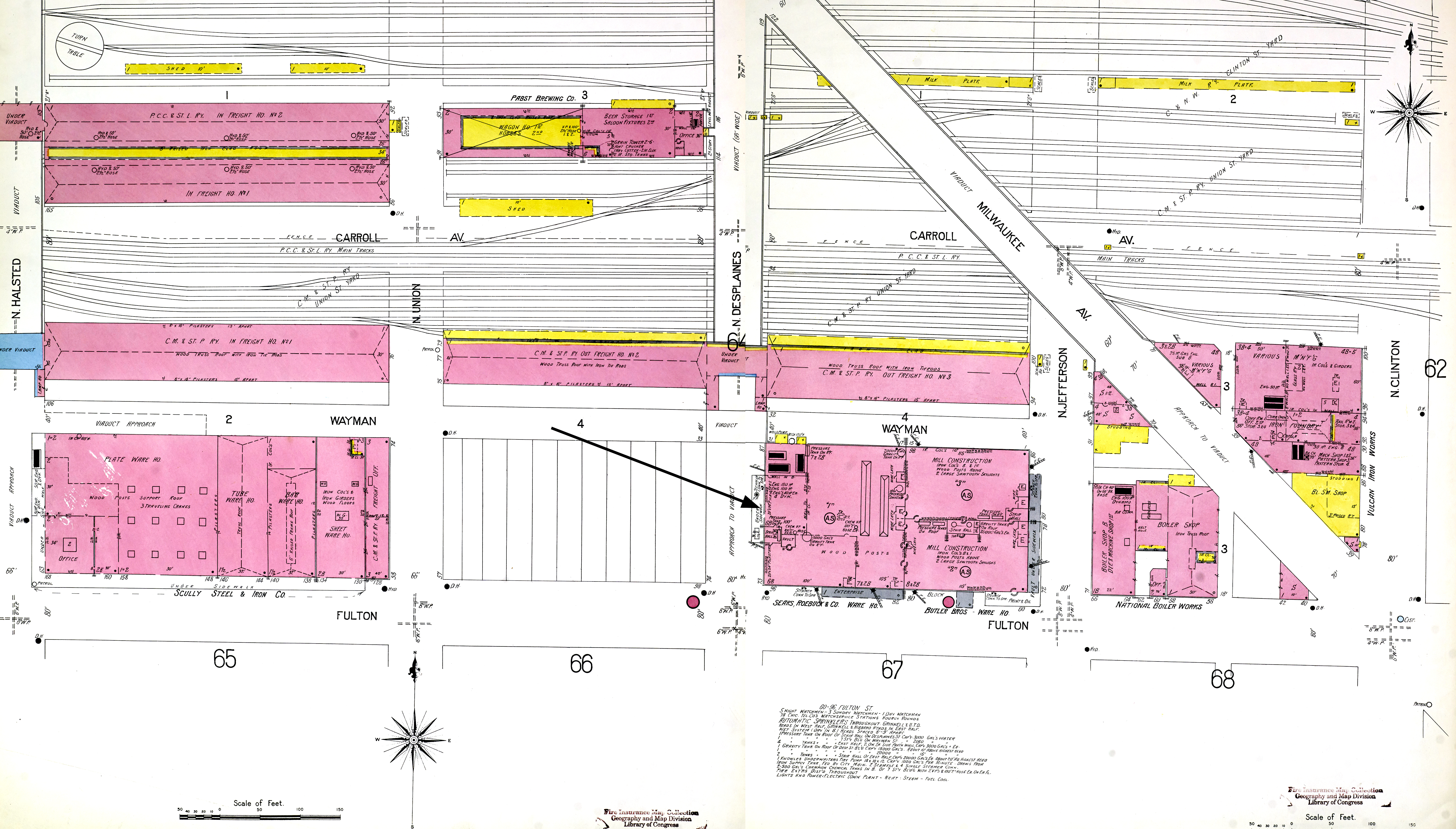 The buildings at Fulton and Desplaines were occupied at one time by Sears, Roebuck & Co. and are now occupied under a lease by Marshall Field & Co. for warehouse purposes. White & Tabor represented Mr. Spry in the transaction and W. A. Merigold & Co. represented Mr. Mathlessen.

River West has a new neighbor. This is the opening weekend of China Club, 616 W. Fulton (312-4660400), a multi-million-dollar nightclub run by a trio of New Yorkers—Michael Barrett, Danny Fried, David Boyd—and Chicago entrepreneur Paul Stepan. The original China Club opened in New York in 1985. In 1989, a West Coast version opened in Los Angeles.

General Manager Russ Brunelli, an intense and friendly sort who bears an uncanny resemblance to actor Steven Seagal, says the club will showcase both local and national talent.

“We will not be an attitude bar,” he said. “They’ll be no pick and choose” says Brunelli, referring to the club’s admission policy. “I want people to feel comfortable.” 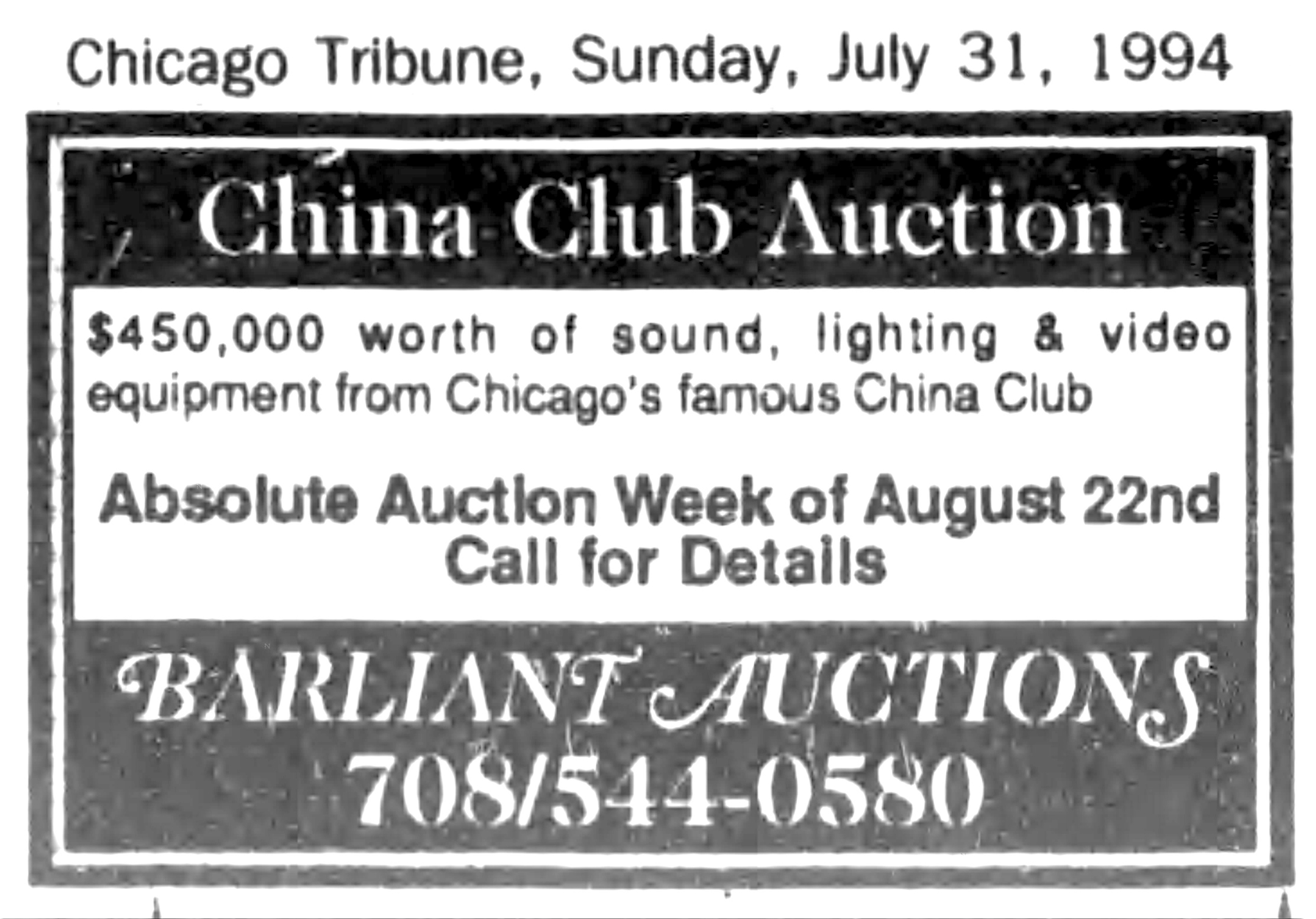 The Oriental mystique is deliberately played up. Indeed, the name derives from the large Oriental collection of co-owner Michael Barrett, a former New York City police officer. Oriental dragon kites, decorated in vibrant red and gold colors, hang from the ceiling. A small bridge overlooks a rock garden—that is, a garden decorated with electric guitars.

The centerpiece of the club, says Bunoli, promises to be the expansive dance room on the second floor. Deejays play the latest dance music but with a difference. The vocals are removed and are replaced by classic rock, funk and soul vocal tracks. So if you’re curious to find out what “Light My Fire” would sound like with a hip hop or rap beat, this is the place to be.

The China Club Lofts on Fulton Street is a seven-story elevator building located just steps from River North, the Loop, the Merchandise Mart, and a fitness club.

The one and two level lofts have one or two bedrooms.

The terrace lofts are being added to the top floor. These newly built, two-story penthouses will have private terraces, island kitchens, and mezzanine master suites. They are priced from $184,800 to $209,800.

The developer is MCZ Development, and the marketing agent is Jameson Realty Group.

To visit China Club Lofts at 606 W. Fulton in Chicago, take Int. Hwy. 94 to Lake Street, and exit east. At Des Plaines turn north and go one block to Fulton. 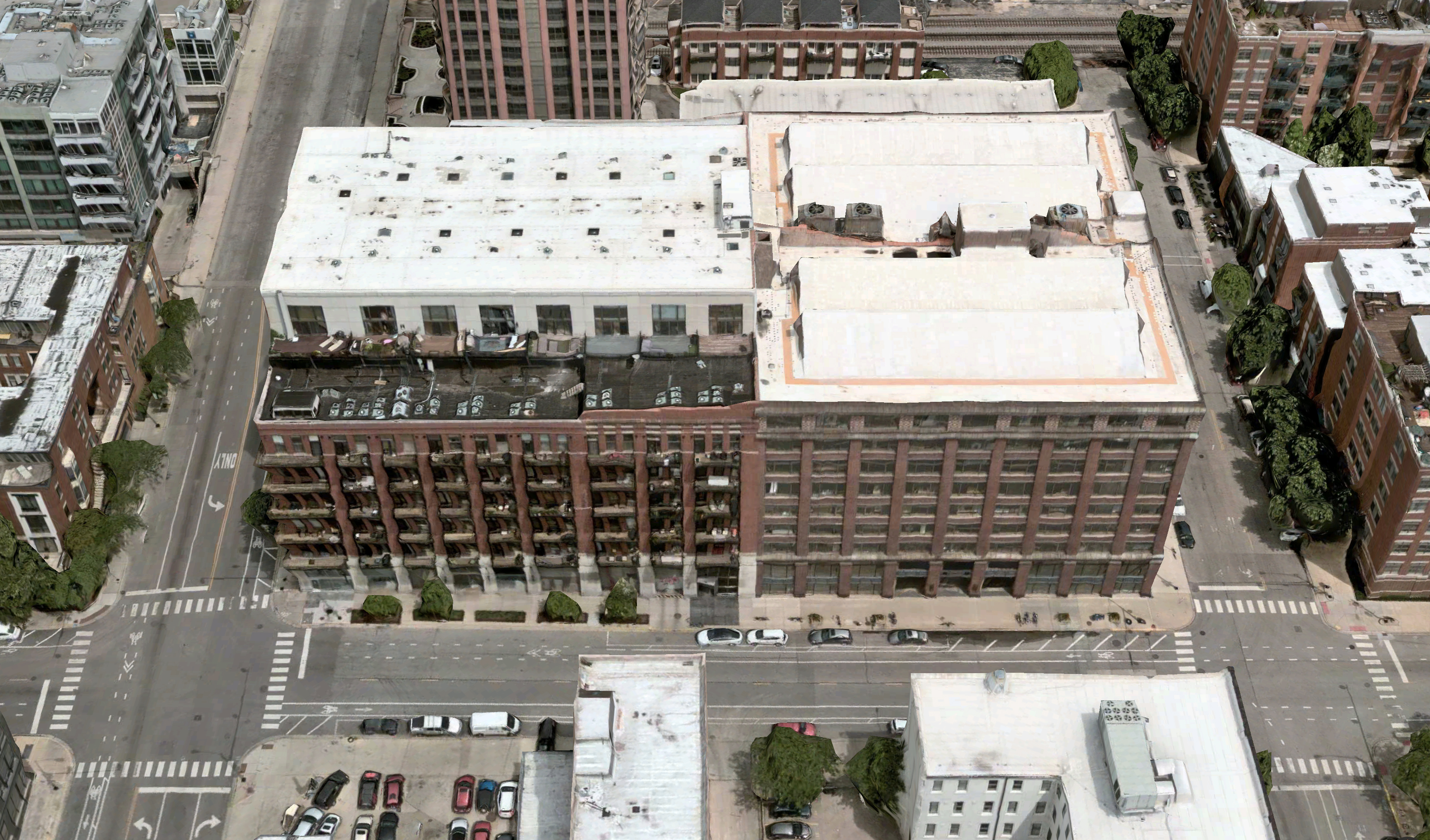