< --Previous  Up  Next–> The lot upon which the Central Trust Company Illinois’ building once stood was cleared by the Great Fire of 1871, and remained vacant until 1880, when the building shown below was erected upon it and was occupied by Rand & McNally. It was a five-story building in front and six stories in the rear, with a light court about 40 feet wide separating the two buildings.

Other prominent printers, located at that time on Monroe Street, between Clark and Franklin Streets, were: 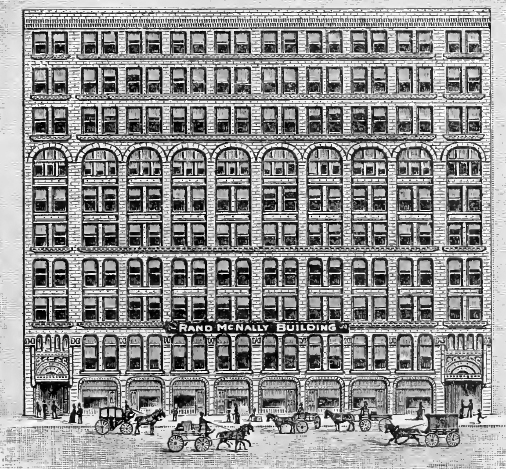 The Rand McNally Building (1889-1911), in Chicago, was designed by Burnham and Root. The first Z-bar steel columns, invented by Charles L. Strobel, were used in this building; it was the first building of all-steel skeleton construction; and was the first building to use all terra cotta facades on the street fronts.

This building is where the World’s Fair headquarters are located. If so, you will find this to be one of the most magnificent structures in the world. The publishing and printing house of Rand, McNally & Co. started in 1856, since which date the remai’kable growth of its map and book-publishing business has necessitated several removals and enlargements of qusrters. Every time it has shortly found itself cramped for room, until the recent removal into the new building, 162 to 174 Adams St., which makes ample provisions for future expansion. This building is a model in size, convenience and durability, and absolutely fire-proof. It has ten stories and a basement, with a frontage of 150 feet on Adams st , extending back 166 feet to Quincy st. The framework is entirely of steel, the two fronts are fire-proofed with dark-red terra-cotta. in handsome designs, and the interior is fire-proofed with hard-burnt fire-clay, no part of the steel being exposed. In the center of the building is left a court 60×66 feet, having its outer walls faced with English white enamelled bricks. Owing partly to its great size, and partly to the fact that it is the first steel building in Chicago, besides being probably the largest and most complete building ever erected exclusively for the printing and publishing business, it is exciting a great deal of interest. Burnham & Root were the architects. The following facts concerning it illustrate in a striking manner the vastness and solidity of a modern commercial building. It contains 15 miles of steel-railway-65-pound rails in the foundation, besides the 12-inch and 20-inch steel beams. There are 13 miles of 15-inch steel beams and channels, 2½ miles of ties and angles in the roof; 7 miles of tie rods ; 10 miles of Z steel in the columns ; 12 miles of steam-pipe ; 350,000 rivets and bolt ; 7 acres of floors ; the boards of which would reach 250 miles were they laid end to end. The foundations contain 1,060 tons of steel, while the beams, etc., will weigh 2,000 tons, and the columns 700 tons; making a total of 3,7 tons of steel in this giant structure. The oflices of the various departments of the Columbian Exposition are accessible by elevator. Just now everybody from the Director General down is very busy, but that need not prevent you from looking around. They will answer your questions civilly—everybody is civil in Chicago -but don’t ask too many at present.

The general offices of the Chicago, Milwaukee & St. Paul Railway were located here on the 2nd and 3rd floors, as were the headquarters of the World’s Columbian Exposition, on the 4th and 5th. The Long Distance Telephone Company (Quincy Street side) allowed patrons the ability to telephone New York City, a novelty at the time.

It was torn down in 1911 and the JW Marriott (City National Bank, Continental Bank Building, 208 South LaSalle), building replaced it at 208 S. LaSalle in 1912. This building still stands.