REBUILT CHICAGO—MESSRS. FIELD, LEITER & CO.’S GREAT WHOLESALE HOUSE.
As an evidence of the determination of Chicago merchants as well as real estate men, to keep up the old status of the city as a commercial emporium and market for the Northwest, we refer our readers to the superb full page engraving on another page, of the new building erected by Messrs. Field, Leiter & Co., at the northeast corner of Market and Madison streets, for the accommodation of their wholesale business.

Destruction of the Old Store.
The marble palace occupied by this firm, at the corner of Washington and State streets, so conspicuous an ornament to the city, went down on the fatal October 9th. Rallying their large force of employes and caravan of wagons, this firm saved a large amount of their most valuable goods, and all their books and papers. The thorough discipline with which their business is always conducted, was shown at the fire, in the system and obedience with which all their orders were obeyed. While yet the embers were bright in the ruins of the old store, these gentlemen leased the large brick carhouse and stables of the City opened Railway Company, on State street, and soon opened there for business, having fitted up the place in a very comfortable manner. 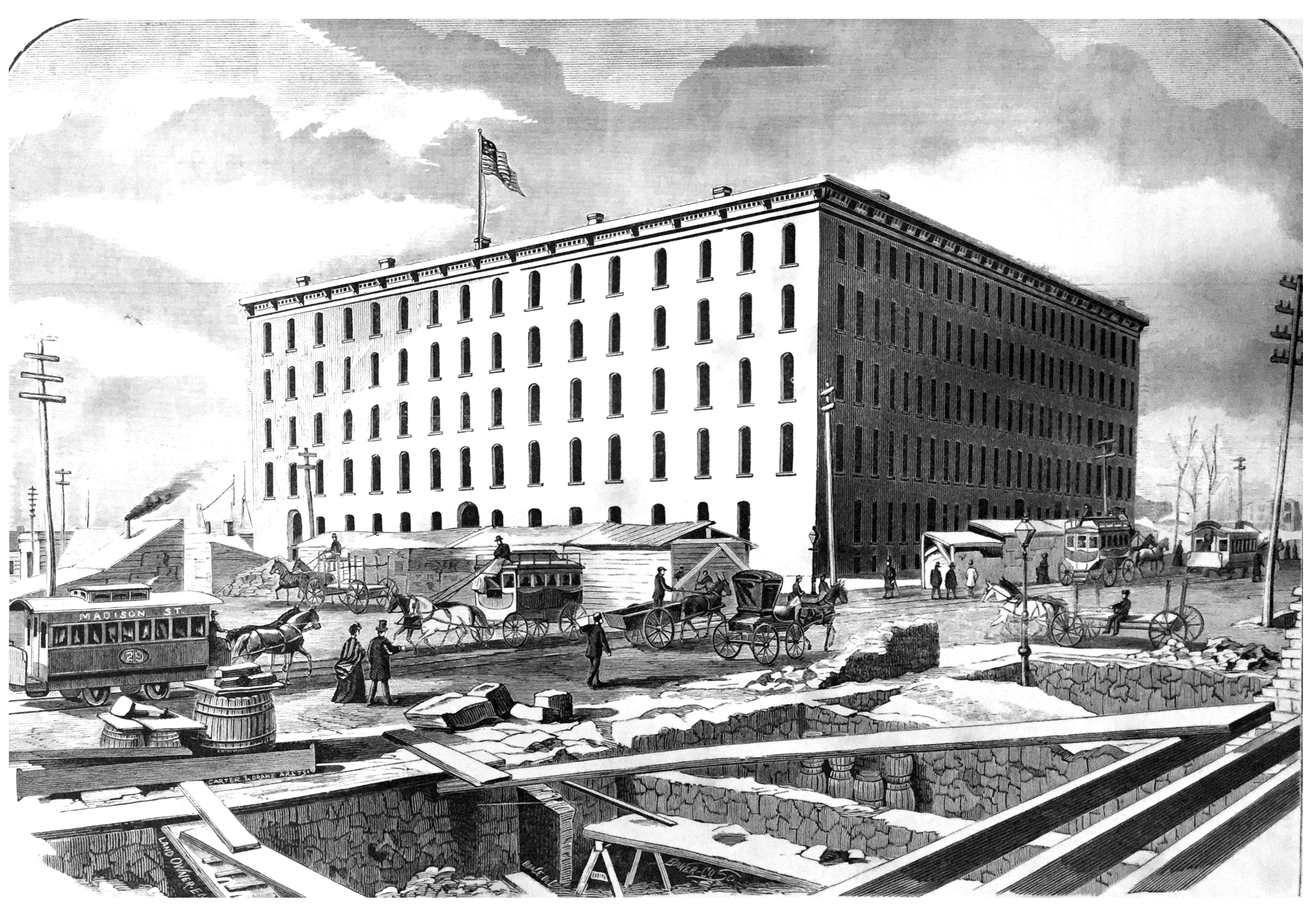 The Wholesale Building Movement.
Immediately thereafter the site of the wholesale building was leased, and the result is before our readers in our engraving (above).

This building has been constructed, from the foundation, in one hundred days. It is 200 feet on Madison street, and 190 on Market, and stands directly opposite of Mr. Coolbaugh’s Central Union Block, also illustrated in this issue. It is built of pressed brick, with stone trimmings, and is, in every respect, a first-class structure—not a temporary outgrowth of the fire. It will contain steam passenger and freight elevators, and its internal arrangements will be thorough and complete. It will be occupied during the last of February as the wholesale department only, of this great firm. 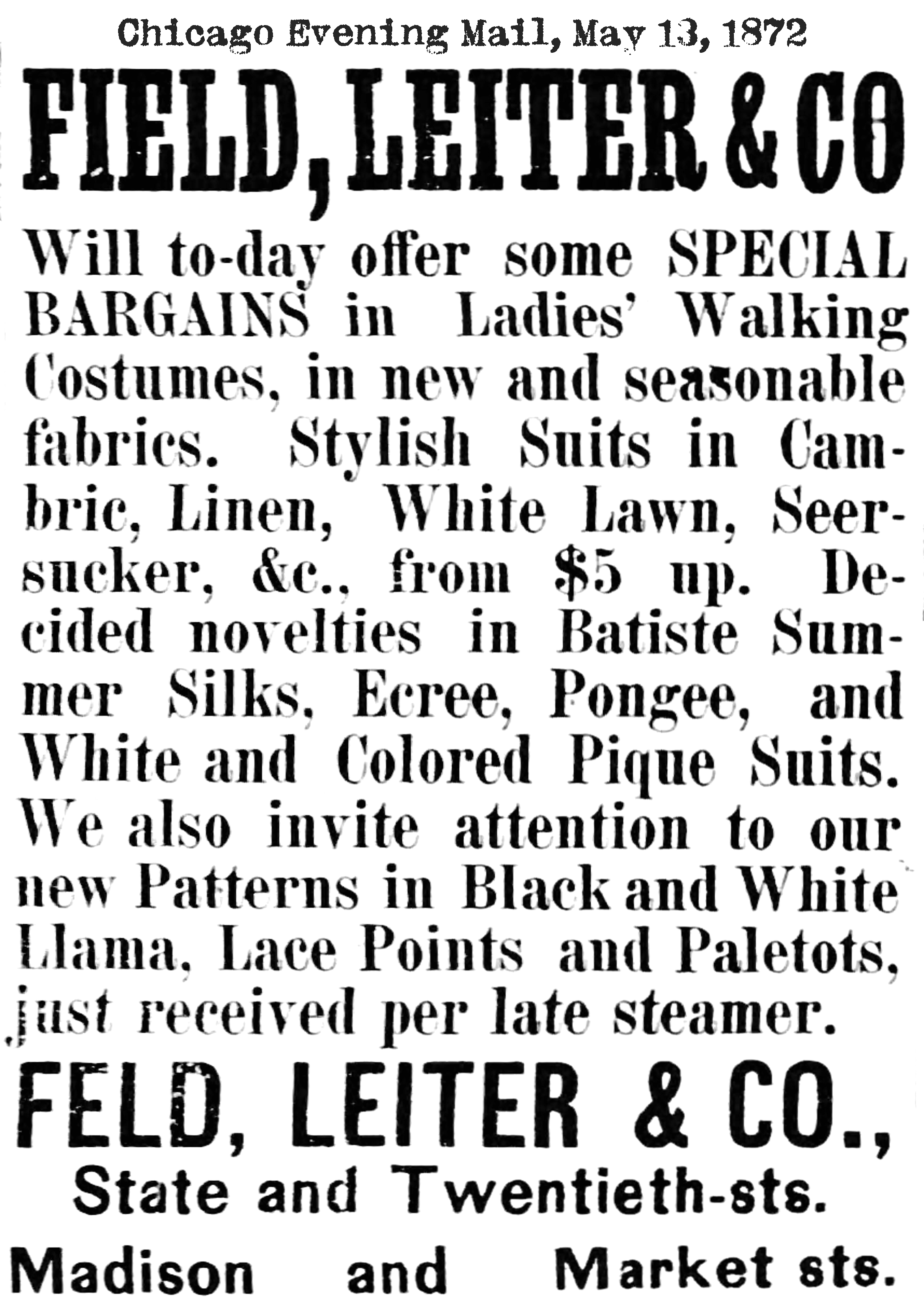 Cause of a Real Money Movement.
Messrs. Field, Leiter & Co., by moving westward to the river from their old site, created quite an excitement in real estate in that vicinity, causing an immediate advance of from twenty to forty or fifty per cent over what the property was held at before the fire. Immediately the smaller dry goods firms, as if waiting to see the hand of their great leader, followed, and the lighter goods houses are centering there.

No Compromise.
The business of this house amounts to millions annually. Although as great sufferers by the fire as any firm in the city, they have asked for no compromise with their creditors, and from the day of the fire have paid dollar for dollar of their obligations at maturity, asking nobody’s assistance, but standing firmly on their own bottom. Having their business strong in hand, with capital concentrated instead of scattered, they are now the great house of the West, as they must long continue to be. And they will fully sustain the reputation that this market has so long enjoyed.

Field, Leiter & Co.
To write the business history of this house for the period since the fire, is to recite facts almost too well known to the city, and the trade far and wide, to need enumeration. It is enough to say that immediately after the destruction of their magnificent building, they purchased and transformed the immense brick stables of the City Railway Company, at the corner of State street and Twentieth, into business premises, and within twenty days were offering all their leading lines of goods. Almost immediately they began the immense building on the corner of Madison and Market streets, the site of the Garden City Hotel, now filled throughout its acres of floors with their stock. Both stores are full and busy. Another season will see them with their retail department in their old stand, at the corner of Washington and State streets, in the magnificent Singer Block, the finest retail dry goods premises in the world. 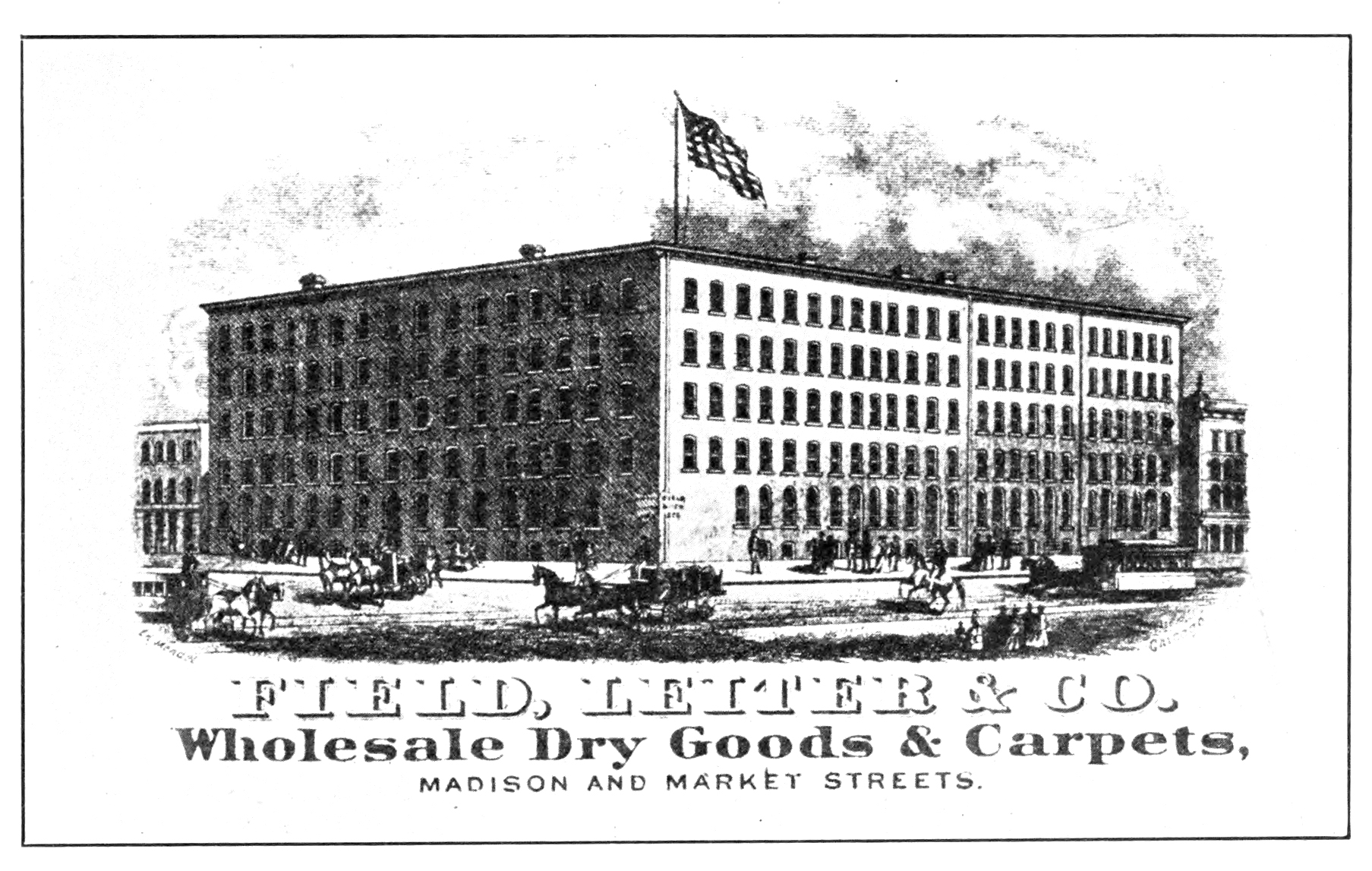 The wholesale establishment of Field, Leiter 6- Co. and subsequently of Marshall Field & Co. up to 1887, when removal took place to the large building of rough-hewn granite occupying the block between Adams, Franklin, Quincy and Wells Streets.

⑧ The Old Marshall Field Wholesale Building,
At the northeast corner of Madison and Market streets, was hurriedly erected in 1872, to serve the owner’s great dry goods houses, both wholesale and retail. On its site, before the Great Fire, stood the Garden City Hotel. The frontages are 240 feet on Madison and 180 on Market Street, and the 5-story building is remarkable for the number of its solid iron shutters, which have always been closed at the end of business hours. The value of the goods which have passed through this house would doubtless reach ten figures. It possessed the unusual convenience of a loading-place on Market Street, where traffic could never be engorged. The exterior is of the plainest brick. There are 4 freight elevators, and it is still largely uaed as a warehouse for the firm, which moved first its retail business to the splendid quarters at Washington and State streets, and after many years the wholesale to the granite structure at Adams Street and Fifth Avenue. A part of the old store is occupied by jobbers, manufacturers, and other denizens of the wholesale district. 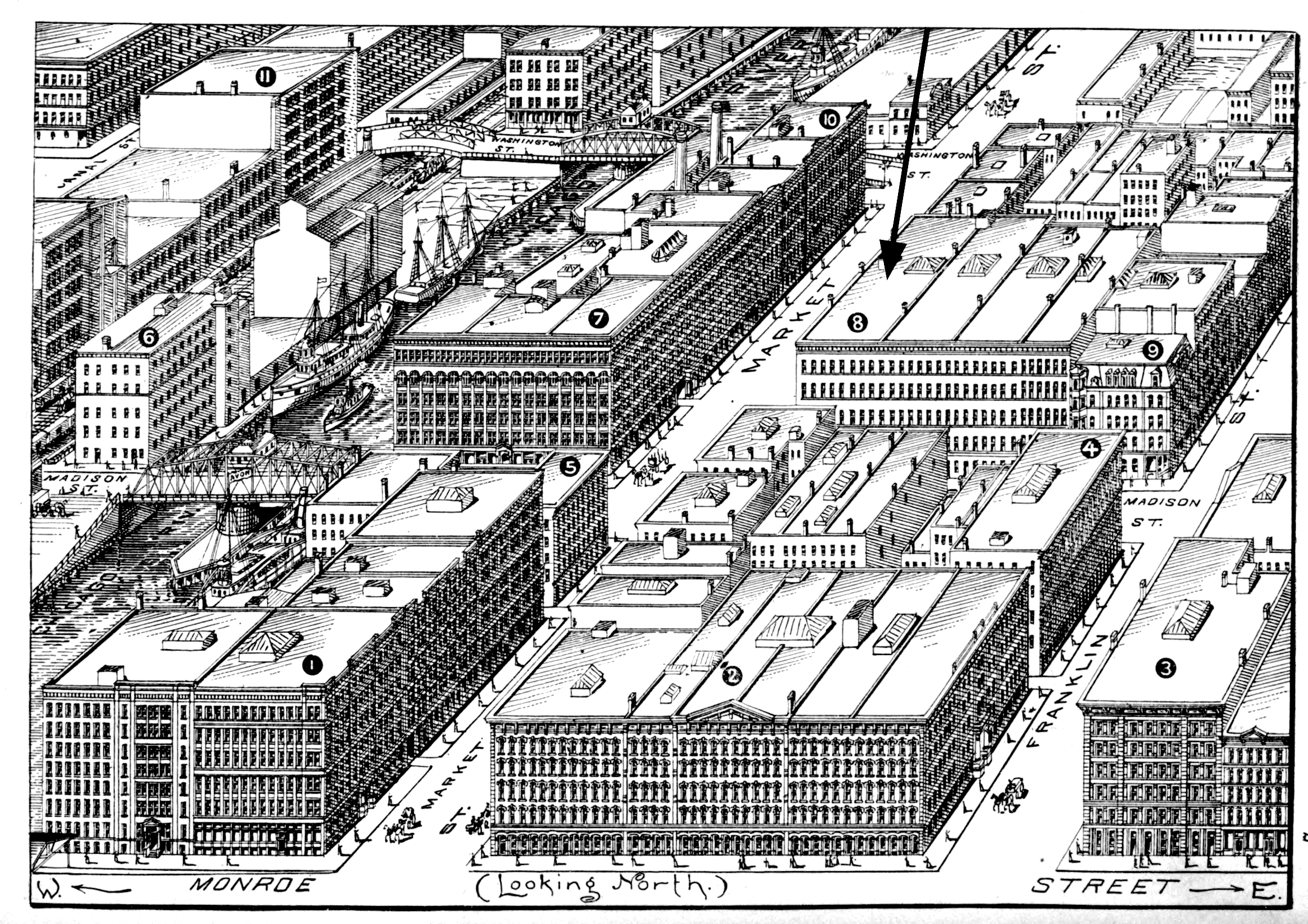 In this work he met and was familiarly known by many of Chicago’s noted business men. It may he of interest to chronicle that Edwin Spear installed the first electric call bell in this city in the old Field, Palmer and Leiter building, at Madison and Market streets, which has since been well known as the Marshall Field & Co. warehouse. 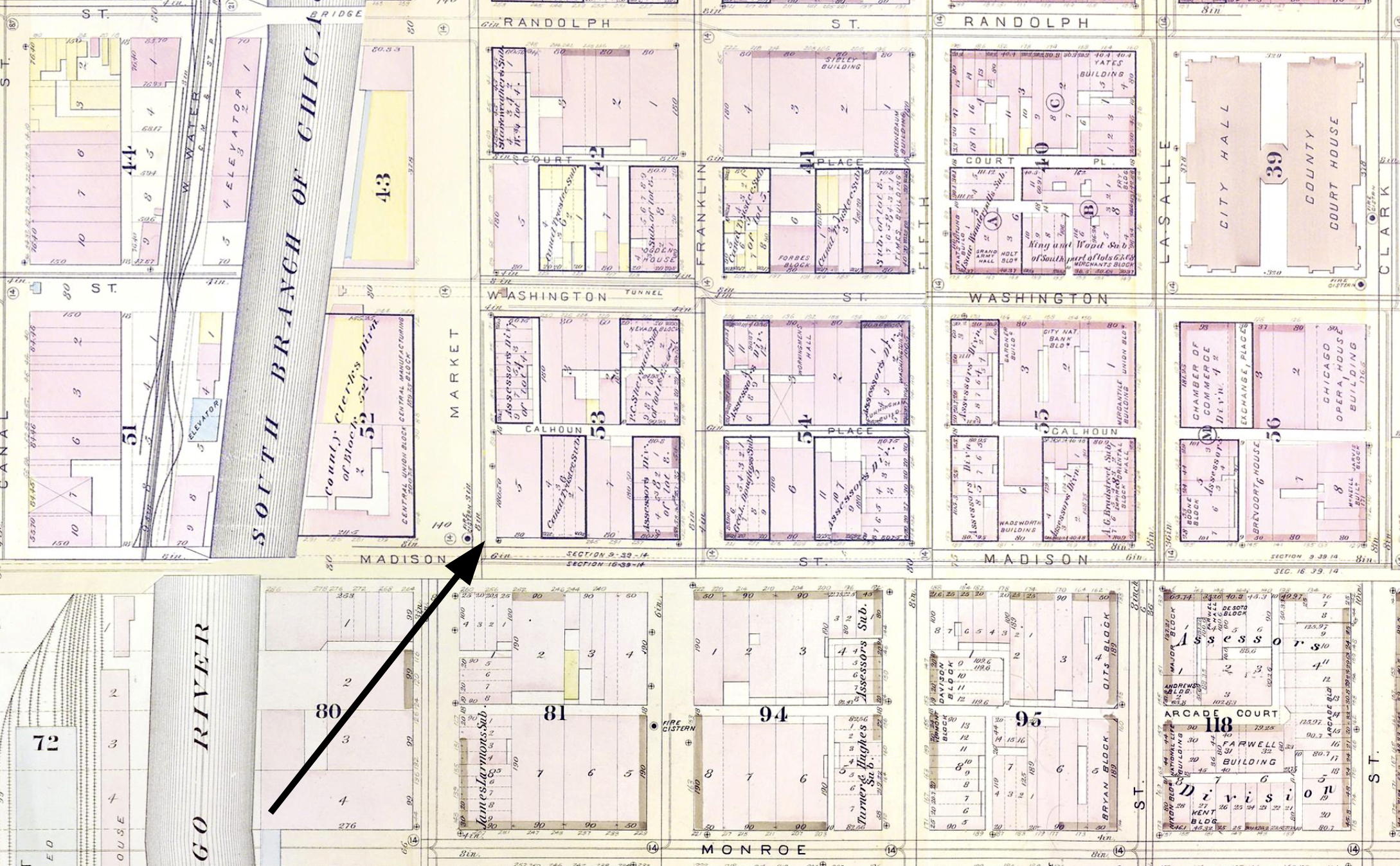