THE SINGER BUILDING, CORNER STATE & WASHINGTON STREETS.
This grand structure, the foundation being laid, and which is to be completed next May, is probably the most elaborate and expensive of all our mercantile buildings, and even vies with our great hotels in point of architectural beauty and massive grandeur. It is from the plans and drawings of the architect, E.S. Jenison, Esq., whose designs were accepted by the Singer Company, out of seventeen presented for competition.

The lot upon which this structure is being built was purchased of Potter Palmer, Esq., by the Singer Manufacturing Company soon after the fire. It is 150 feet on Washington by 160 feet on State street, the latter being the main front. The building will be seven stories and basement in height, and will measure from the ground to the highest point, 138 feet. It will be surmounted with a French roof, built entirely of iron, richly ornamented. The interior will be so arranged that it can be converted into one colossal store, or divided into five smaller stores, for the convenience of large dealers. The centre division fronts 38 feet, the adjoining division on east side 29 feet, and the extremes a compromise between the two. The first floor will be two feet above the sidewalk, differing, in this respect, from any other in the neighborhood which are, without exception, only one step above. The front of the first story will consist entirely of iron and glass. The second, third, fourth, and fifth stories will be of Ohio sandstone, from the Columbia quarry. The material is lighter than the Cleveland stone, has a grayish tint, is of very fine grain, and looks exceedingly rich. The sixth and seventh stories will be in the Mansard roof. Over the central portion there will be one colossal dome, 40 feet in height, while a similar dome, of inferior size, will cap the corners. The effect of the difference in point of richness, in the two divisions adjoining the centre, will be to throw the latter out into bold contrast, and bring out the many fine points which might be lost in contemplating a front of such size of one pattern. The center division, on State street, will be made still more conspicuous by the addition of a very handsome projecting porch over the second story. At appropriate points on both fasades there will be altogether seventeen life size statues of bronze, which will heighten the general imposing effect. On the fifth story, over the center, four of these figures will represent the seasons. On each side of the center, up as high as the fifth story, massive stone columns will rise, upon which pedestals will be placed the statues of eminent men. On each of the domes will be placed Amazonian figures. These statues will be imported, and will, of necessity, add considerably to the expense of the building. On the roof the dull blue slate will be gratefully relieved by elaborate bronze ornaments, including festoons and wreaths. At the corners of the end domes there will be figures of dolphins, also of bronze, 8 feet in length. The central projection on both fronts is capped by a dome 40 feet in height, in the middle of which is a triplet window, with a wheel at top. The whole of the center dome will be finished above with a graceful and elaborate bronze study. Over the fourth story, and in the centre of the building will be engraven the words, “Singer Manufacturing Company.”

Singer Building I
In Process of Erection at the Southeast Corner of State and Washington Streets, Field, Leiter & Co.’s Old Site

The general design is the Renaissance, bold and deep in outline. Every window throughout the building will be glazed with French plate glass of the finest quality.

The cost of so much excellence will be, probably, very near $500,000. It is under contract to be finished May 8th, 1873, and as the contract for the stone work makes the stone supply certain by the first days in September, it is expected to have the noble structure under cover before winter, by which time, probably, State street will begin to wear an experience as gratifying to the eye as it did a year ago.

The company erecting this superb building is among the most important of our American manufacturers. The Singer Sewing Machine is used in every part of the world, being known throughout Christendom, and generally valued as a depository of their surplus funds, and will bring them a good percentage upon their money. After our great fire this staunch company desired to see our beautiful city rebuilt more perfect and grand than before its destruction, and, having an enormous business in the West, they resolved to invest here half a million dollars, as a fitting tribute to Western pluck and enterprise, which their little machine, in thousands of household, has helped to stimulate and keep alive. The site was purchased, seventeen architects competed honorably for the credit of drawing the plans and superintending the work of erection, and the result is before our readers, in our illustration (above), which was drawn from the architect’s plans by our artist, Mr. J.B. Beal,

Im 1870, the Singer Company sold the enormous number of 727,833 sewing machines, a much larger number than was sold by any other manufacturers. Their offices and distributing agencies are distributed throughout the world, as follows: 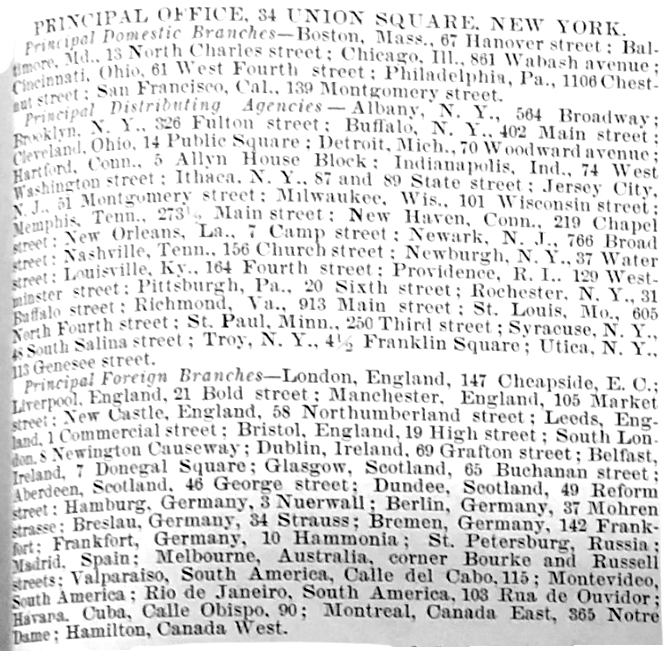 Of the excellence and adaption of the Singer Machines is not the purpose of this article to speak. Tens of thousands of housewives know their value, and their reputation is firmly established everywhere. The Chicago office, located temporarily at 861 Wabash ave, is under the efficient management of Mr. Boulton, who will also overlook with a creful eye, the erection of the grand building, a task for which his good business judgement well fits him.

Mr. E.S. Jenison, the architect, may feel a just pride in his plans, as several of those presented by his competitors were of great excellence. He is a young man whose advent in Chicago dates a little more than two years back, yet in that short time he has won success. In the immediate neighborhood of Washington and State street, where the Singer building will stand, Mr. Jenison will soon have in course of erection buildings covering 693 feet. On the northeast corner will be the Singer building; opposite it a a building for Messrs. Hale & Fisher, adjoining that of Mr. Speer. On the southeast corner will be the handsome building of Hale, Emerson & Co., which is going up steadily. There will also be buildings owned by Dr. N.S. Davis and A. Grannis, which, together, com,plete the figures given above.

The Singer building has had a visible effect upon real estate in the locality where it will stand. Its erection and the well known fact that several of our leading business houses are competing for its lease, has effectually settled the fears of many that business would seek other localities than those occupied before the fire. State street, Wabash avenue, and contiguous property has perceptibly advanced, and there is now no doubt that these streets, and especially Wabash avenue, will be the future great thoroughfares.

THE SINGER BUILDING,
located on the northeast corner of State at Washington streets, the site occupied before the fire by Potter Palmer’s building, in which Field & Leiter had their magnificent dry goods rooms, will stand at the head of our business blocks as being, perhaps, the finest structure of the kind in the city. It is a beautiful building of white sandstone, costing $500,000. Its dimensions are 150 feet on Washington by 160 feet on State street. It is owned by the Singer Manufacturing company, and will be occupied by Field, Leiter & Co. 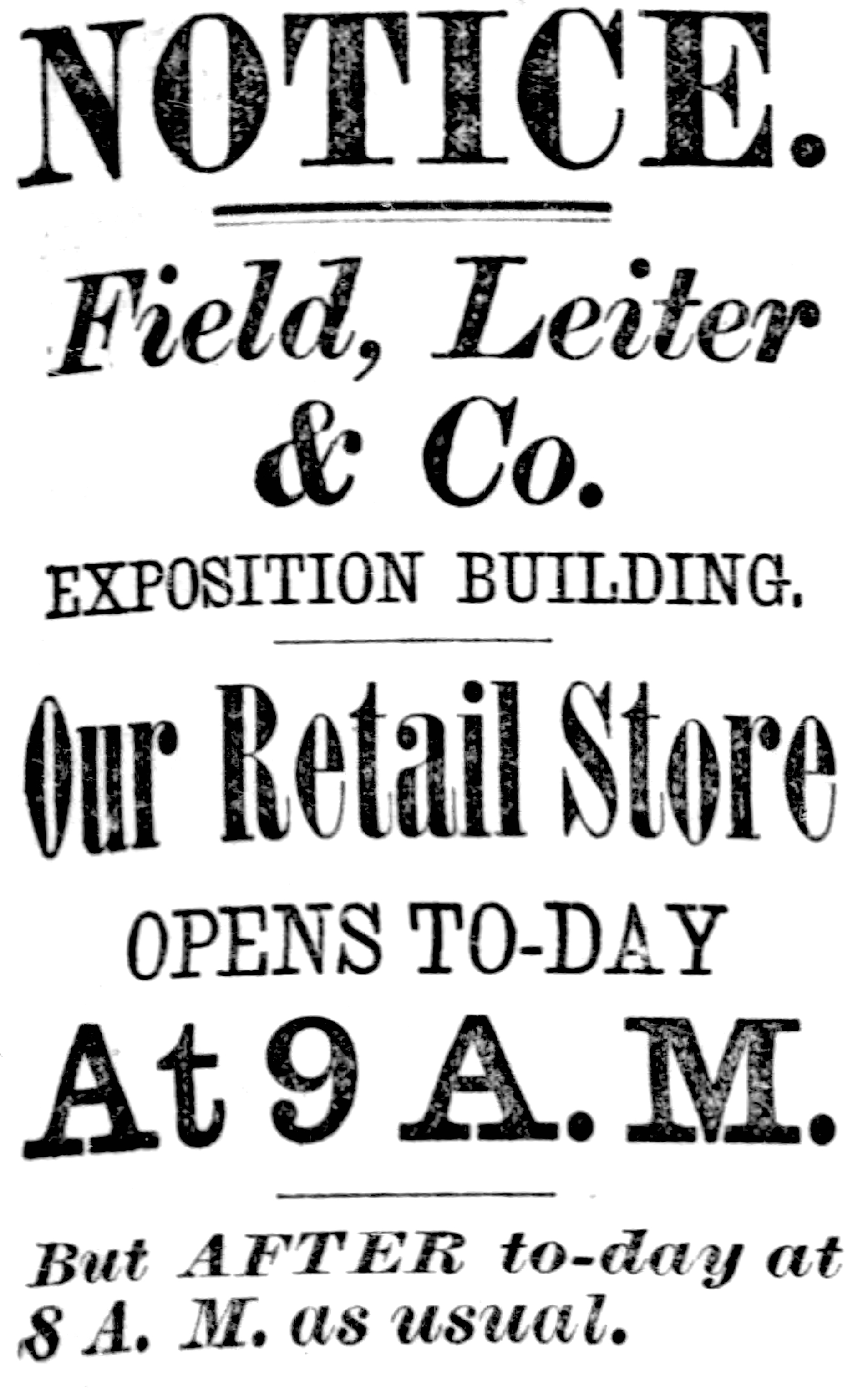 The work of putting a stock of goods into the Exposition Building was begun early yesterday morning, and so rapidly was it carried on that Messrs. Field & Leiter will beready offer customers this morning everything that could be obtained at their old store. Visitors to the new establishment will be astonished at the transformation wrought in a little over a week in the structure at the foot of Adams street. Only about two-thirds of it is really occupied by the firm, the extreme southern portion being cut off by a partition, as is also a strip of about 150 feet at the north end. The space used for displaying goods is about 600 feet long and 200 wide. All that north of the fountain is covered with shelves and counters, while that south is devoted to the suit department, carpets, etc. Taken as a whole, there isn’t a more convenient store in the country. The opening to-day will doubtless bring together a large crowd, if the weather isn’t too wretched. 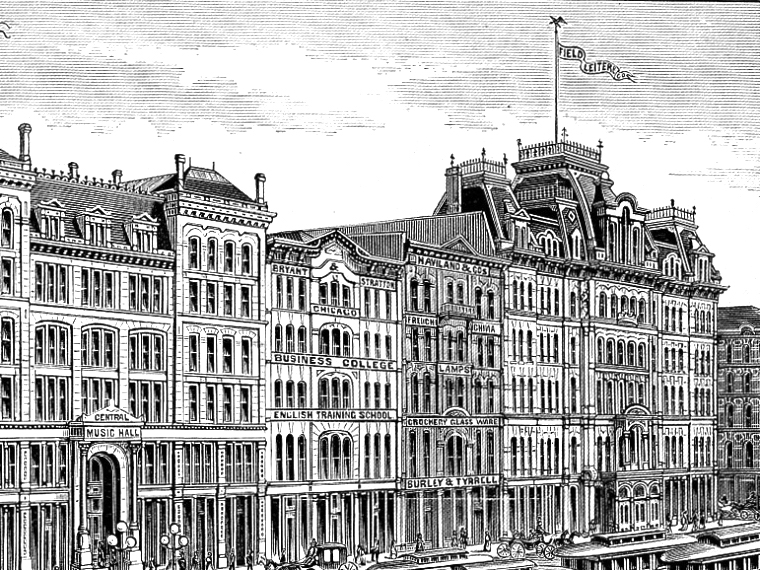 THE EVOLUTION OF STATE & WASHINGTON 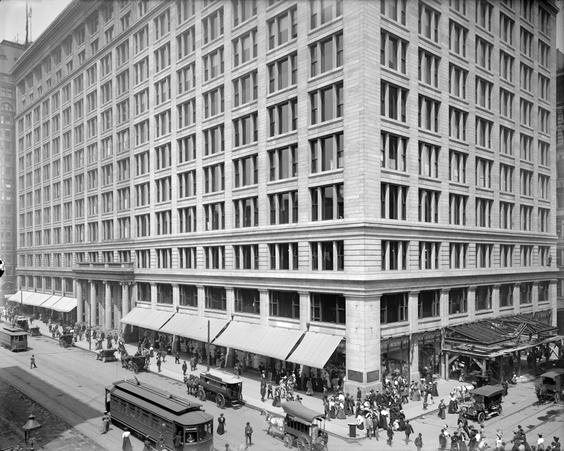