THE picture presented here, showing another episode in the adventures of Robert and Peggy in the wonderland of Chicago and the World’s Fair, reveals the children standing in front of the Art institute in Michigan avenue, the city’s most famous boulevard. Robert and Peggy are facing northward, looking toward the skyscraping structure of Tribune Tower. The children are up early, because there is so much to see and the days are not long enough. The light of the early morning sun over Lake Michigan is reflected in the sky, and the clouds, and upon the tall buildings of the Loop

“Look!” exclaimed Peggy, “there are the planes from the Air circus.”

“Yes,” said Robert, “and here comes the dirigible that we saw last night at the World’s Fair.”

Later in the day Uncle Jack took the children for an automobile ride through Chicago’s marvelous parks and along its beautiful boulevards. The city is noted for its system of boulevards, the best known of which is Michigan avenue, extending from the north to the south of the city. The most interesting part of Michigan avenue is that part between Twelfth street and Randolph street, for on one side is a row of tall skyscrapers. making Chicago’s famous skyline, and on the oiher side is Grant park, the city’s front yard, made almost entirely of land reclaimed trom the lake. 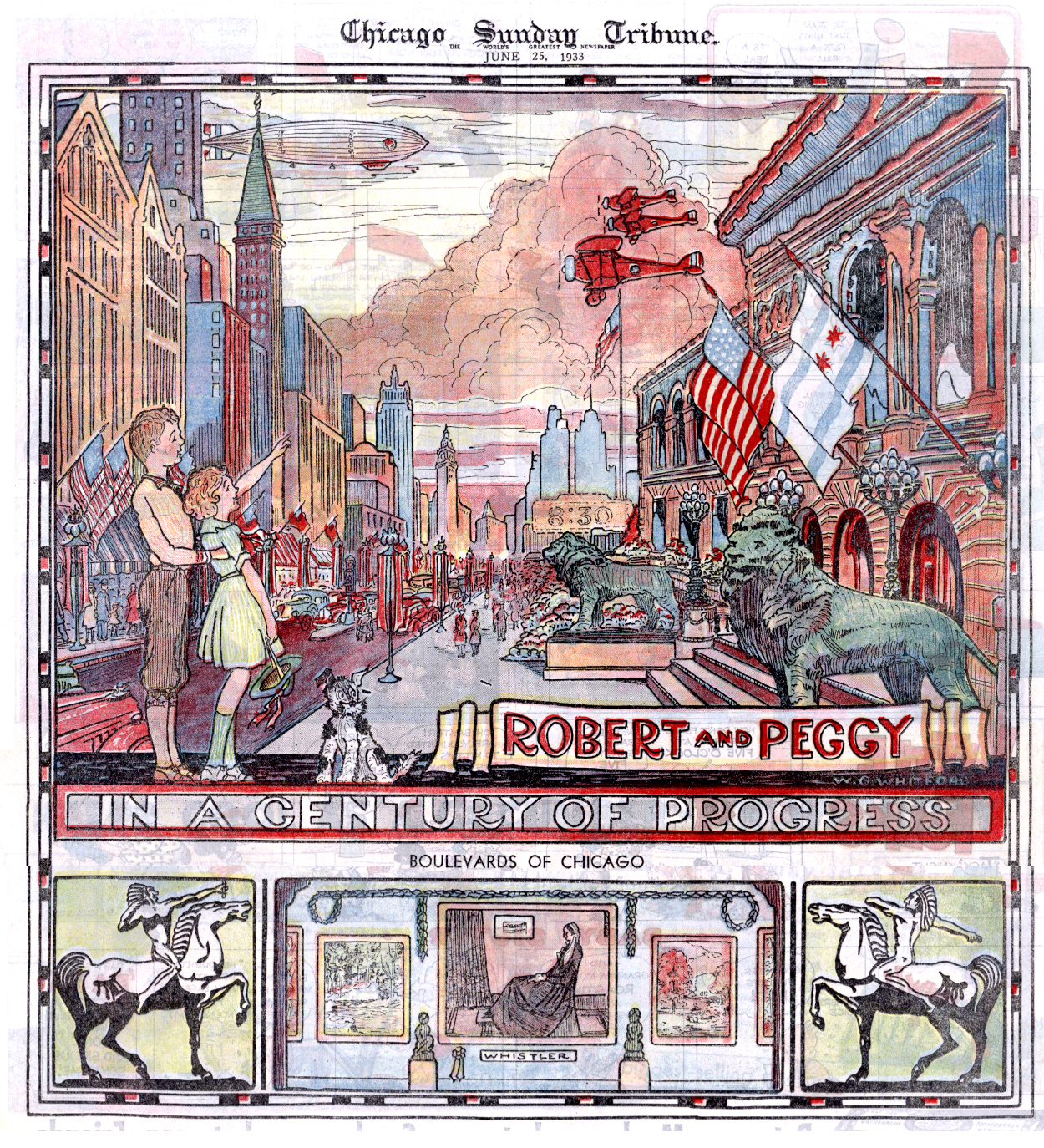 The only building allowed to remain on the east side of Michigan avenue is the Art insWute, housing a remarkable colledion of paintings al1d other works of art. During the period of the World’s Fair +he Art institute contains Whistler’s portrait of his mother, a priceless painting lent from the Louvre in Paris. Whistler’s grandfather was one of the first commanders of old Fort Dearborn, and actually, therefore, one of Chicago’s founders. In front of the Art institute stand two huge bronze lions, and farther south in the avenue stand two colossal bronze horses with Indian riders, marking the gateway into Grant park.

Michigan avenue crosses the Chicago river just south of Tribune Tower and near the site of the original Fort Dearborn.

Extending from Jackson park on the south to Lincoln park on the north, the Outer drive pnrallels the curving shore of Lake Michigan, much of the boulevard lying on land built in which once was lake.

But Michigan avenue and the Outer drive are only two of Chicago’s boulevards. The entire sys+em of boulevards of the city includes more than 200 miles of beautiful drives. many of them containing central parkways, and virtually all of them lined with stutely shade trees.