THE World’s Fair, on the shore of Lake Michigan in Chicago, offers countless attractions to visitors, but none, perhaps, quite so intereS+ing from a historical standpoint as the reproduction of old Fort Dearborn, a stout stockade enclosing bl9ckhouses, a trading post, and settlers’ cabins, all built of logs. This exhibit is a faithful copy of the original fort, from behind the stockade of which the early white settlers of Chicago fought the In d ian so Robert and Peggy when visiting A Century of Progress exposition, spent a great deal of time within the Fort Dearborn exhibit, where they saw at first hand how the pioneers lived when Chicago was only a fortified village in the heart of a trackless wilderness. In the drawing below the children are shown at the exhibit.

Robert and Peggy saw in the fort an old long rifle, of the type used in the wars with the Indians, a quaint old-fashioned cradle, curious dishes, and many other relics of Chicago’s early days. 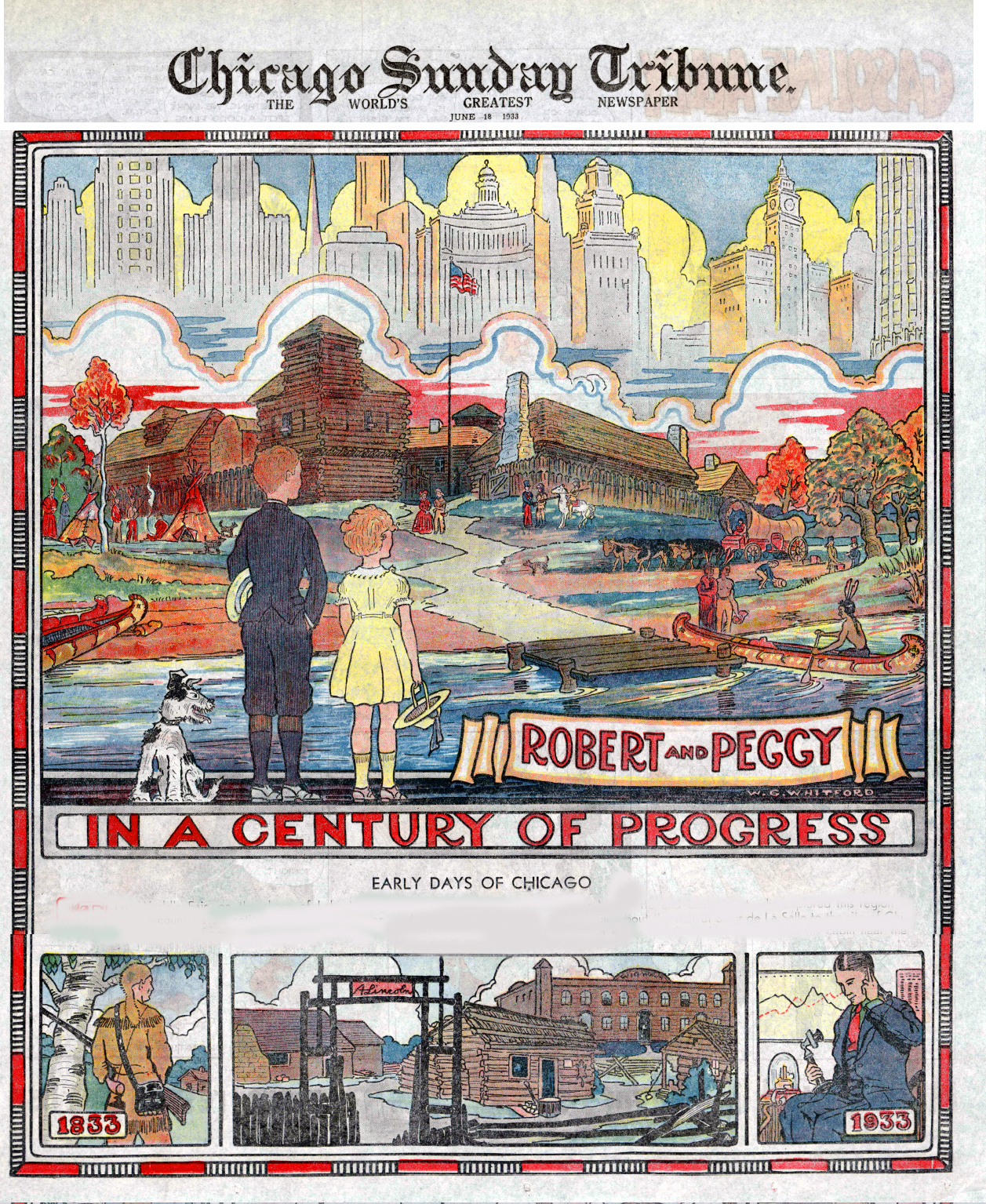 They learned from ~heir Uncle Jack that Indians had camped at the mouth of the Chicago river hundreds of years ago, that fur traders perhaps had paddled their canoes up the river’s calm waters early in the seventeenth century, and that the first- white men known to have visitcd the site of Chicago were Father Marquette and Louis Joliet, who explored this region in 1673. They were told about tho visit of Sieur de La Salle to the site of Chicago, and how John Kinzie, the first white settler, built his cabin near the mouth of the river in 1803.

The children were deeply interested in the account of the Fort Dearborn massacre, which in 1812 many settlers and their families were killed by the Indians and the first fort was burned to the ground. The fort was rebuilt In 1816, but it was not until 1833 iust a hundred years ago, that Chicago became a town.

Robert and Peggy also were told about the nomination of Abraham Lincoln for the presidency in Chicago in 1860. and they saw at the exposition a reproduction of the old building called the Wigwam, in which Lincoln thus was honored.

“These historic exhibits help us to realize the real advancement made by Chicago and the world at large in the last hundred years,” Uncle Jack told the children.

A drawing of the Wigwam and of the log cabin in which Lincoln was born is shown above.