THE jinnee which Aladdin conjured up by rubbing his magic lamp could not have created, with all its miraculous powers, a more fascinating fairyland than men made at the World’s Fair when they built the Enchanted Island, that five acres of marvels for the entertainment of young visitors to A Century of Progress Exposition. Enchanted Island is truly “a dreamland come to life,” with everything in it to small children.

The picture today shows Robert and Peggy at the entrance to this island of enchantment, just after riding across the World’s Fair lagoon In a rocket car of the Sky Ride, 200 feet above the dancing waters that swarmed with motorboats and gondolas.

On the Enchanted Island the two children saw a sailor and a soldier, each as tall as a tree. They also gazed in wonderment at a colossal elephant, a giant Indian, a clown, the Tin Woodman, and other characters right out of the pages of story-books, everyone of them as big as a house. They beheld a giant coaster wagon with the huge figure of a boy riding in it, and went into a house built out of millions of colored marbles. They visited marvelous shops filled with every kind of a toy known in the world today. 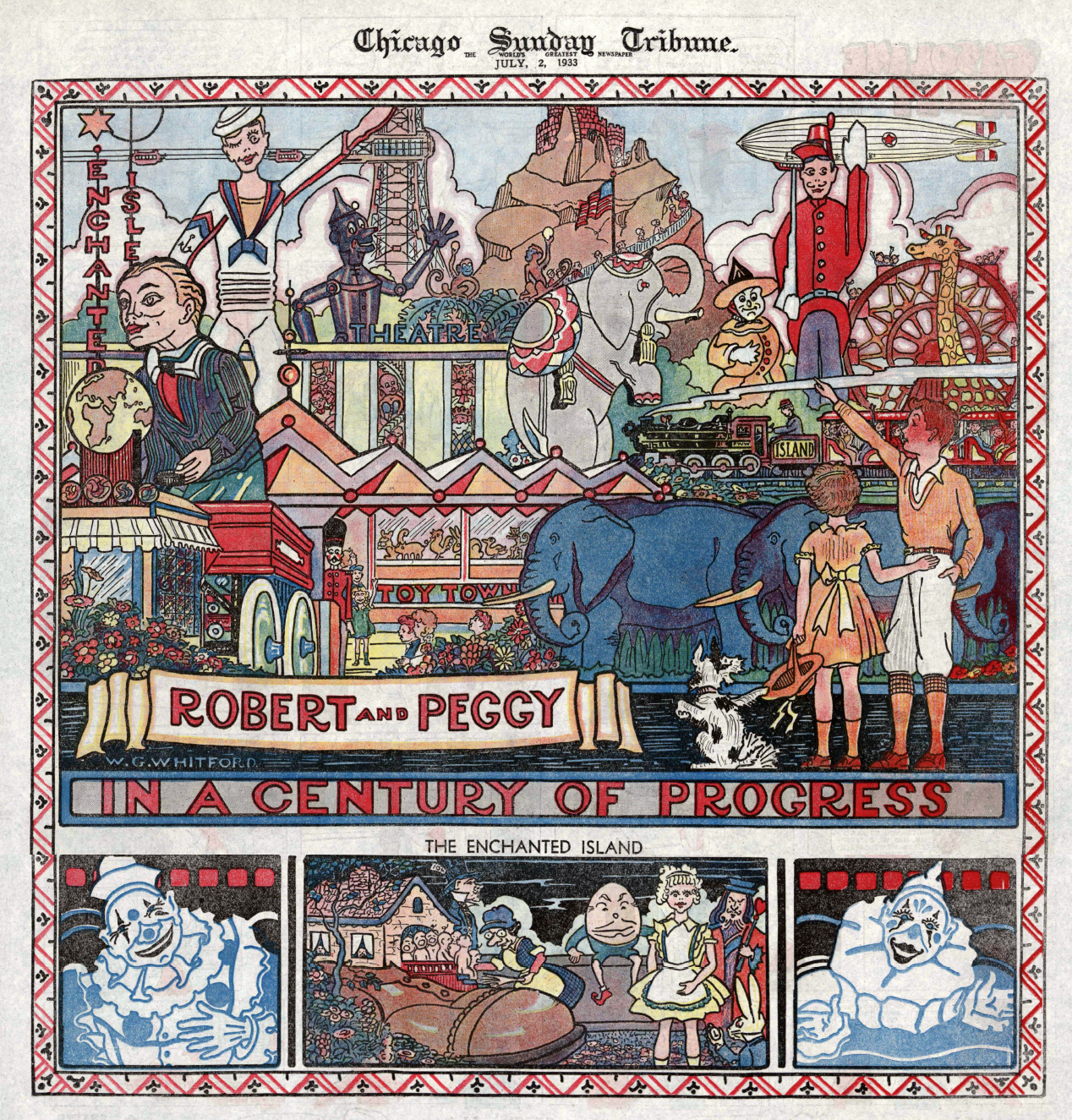 Robert and Peggy took many delightful rides through this wonderland on a train built especially for children. Along the way they marveled at an Old Woman putting her children to bed in a shoe, at Jack and Jill, Pinacchio, Little Red Riding Hood and the Wolf, Jack and the Beanstalk, Alice in Wonderland, and countless other characters and scenes. The children also took rides on gentle ponies and in a “drive-yourself” automobile.

When they had had their fill for the day of riding on a dozen different kinds of merry-go-rounds and upon a miniature Ferris wheel, they spied the Magic Mountain with a real castle perched upon its summit.

“Let us climb to the top,” exclaimed Robert, and away the two went up the windIng path.

“What a wonderful sight!” said little Peggy, as she and Robert looked down upon the whole of Enchal’lted Island.

The children entered the castle and slid down a “dark and mysterious slide” through a cave inside the mountain to the ground below.

When Robert and Peggy wanted to rest their weary legs they went to the children’s theater and watched puppet shows, motion pictures, and many other delightful entertainments. When they grew hungry they found restaurants with wholesome food and cooling drinks. The children would have liked nothing better than tospend all of their time on the Enchanted Island, but they knew there were thousands of other interesting sights to see at the World’s Fair and in the city of Chicago.