Preston, Kean & Co.
The building recently erected by Orrington Lunt, Esq., Nos. 100 and 102 Washington street, just east of the Methodist Church Block, will be occupied on the 20th inst. by the banking-house of Preston, Kean & Co. This building was erected under their special direction, and is therefore arranged so as to meet the requirements of their business. The office occupies the main floor, which is 40×80 feet, and easy of access by a flight of eight steps through a direct entrance. It is well lighted, both from front and rear. The furnishing is tasty and substantial. In front is the general business office of the firm; then follow the several departments for paying and receiving teller, etc., with a separate department for their Government, gold, and security business.

The walls of the book and money vaults are 30 inches in thickness; the money vault is both fire and burglar proof, being lined with chrome steel and iron, and the heavy door is made of the same material. In this vault is placed one of Hall’s burglar-proof safes, manufactured expressly for the use of Preston, Kean & Co., and is considered one of the best, if not the best, safe in the West. It is constructed of alternate plates of soft and hardened steel, and may properly be called a steel safe, is 62 inches high, 42 wide, and 30 deep, with a wall thickness of 3 inches. The inside contains two heavy burglar chests, which occupy two-thirds of the interior; the remaining one-third has reference to the safety of the special deposits of customers of the bank. All the latest improvements have been brought into requisition in its construction, such as conical arbors, double conical bolts, dovetails, tenor and grove, etc., making it drill, powder, and wedgepoof. The doors are secured by three of the best locks manufactured, and the safe, as a whole, in its finest workmanship and security, reflects great credit on the manufacturers, who cannot be surpassed in the world.

THE LUNT BUILDING
Washington street still advances to the front rank of our rebuilt thoroughfares, and it is undoubtedly destined to be the nearest approach to Wall street in its character, of any in the city.

The new building just completed at Nos. 98, 100 and 102, is one of the handsomest that now adorns this universally well-built street. Its massive and attractive front is accurately shown by our artist on page 76, and adds another to the long list of imposing structures in our gallery of new Chicago. The carpenter work was done throughout by Ald. David Coey, and is pronounced by the architect to be exceptionally well done, reflecting much credit upon that gentleman and his workmen. Mr. Coey has done a large amount of carpentry work in the city since the fire, having entirely fitted such buildings as the Union block, Herrick block, Garrett block, Mr. Coolbaugh’s residence on Calumet ave., and many others needless to mention here. Wherever his work appears, it exhibits a permanent character, and undergoes little or no changes by the action of the time, which is so often the case with the wood work of buildings. The Land Owner can point to the carpenter work in the Lunt building as a specimen of the best ever done in the city.

The east forty feet of this block is owned by Orrington Lunt, Esq., and the west twenty feet by Mr. S.P. Lunt and Mr. W. F. Waite. 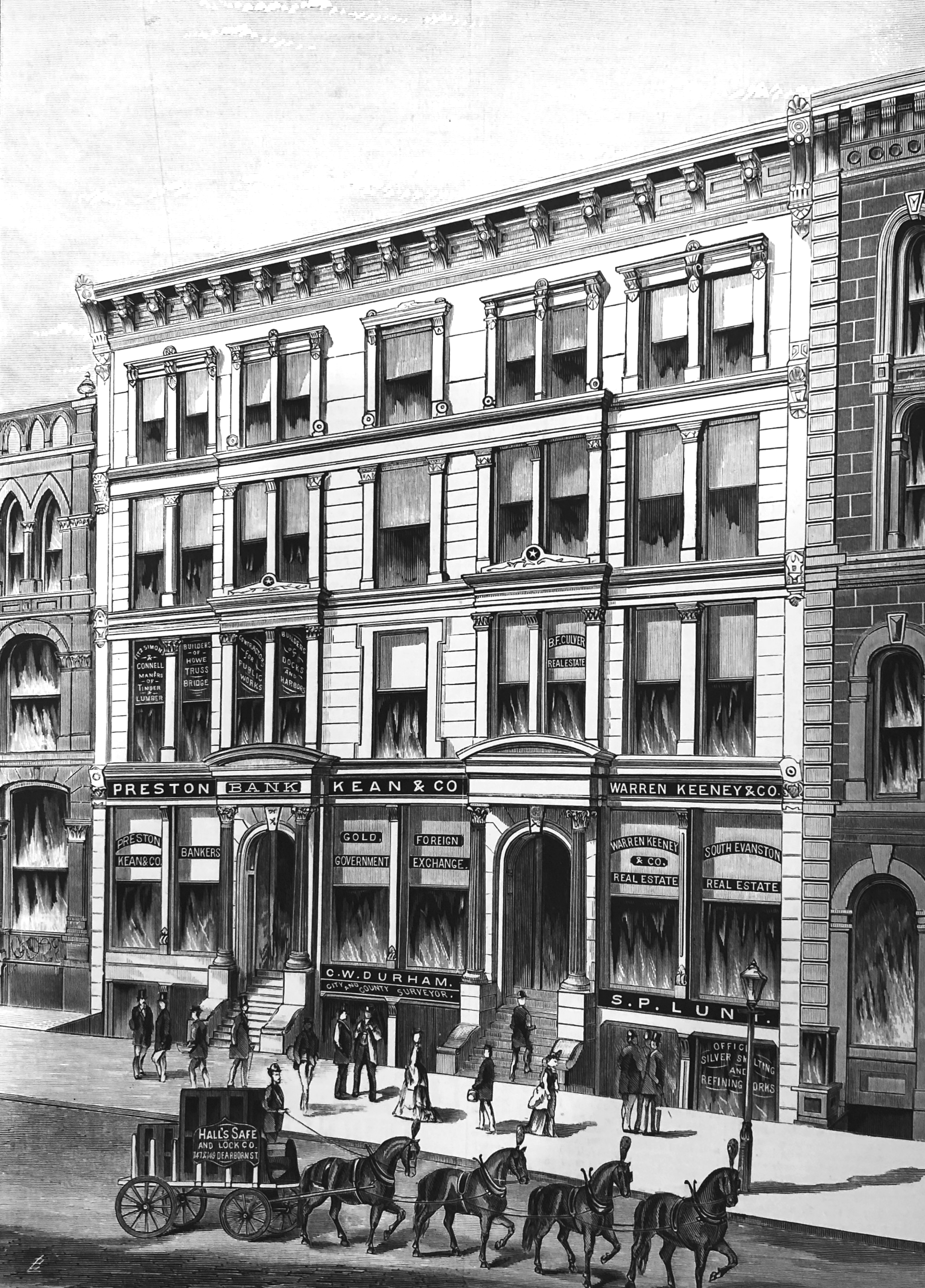 Preston, Kean & Co.
The elegant, large banking-room at Nos. and 100 in this building was finished especially for the occupancy of Preston, Kean & Co., bankers, who are now located and doing business there. This is one of the very largest and most elegant banking offices in the country, affording ample facilities for the transaction of this firm’s large and increasing business. It is only eight steps from the sidewalk, making it much more desirable than many of the higher first-floors so prominently noticed in many of our new buildings.

More than ordinary care was used in the construction of the large vaults in this banking-room, and Hall’s Safe and Lock Company may well pride themselves upon the massive specimen of burglar proofs displayed there, the product of their deft artisans. The money vault is lined with steel and iron, and contains a burglar-proof safe manufactured to Preston, Kean & Co.’s order.

This firm transact a regular commercial business, and receive the accounts of merchants and manufacturers doing business with this city, and who do not have sufficient banking facilities in their own locality. Parties opening accounts with them can make their own exchange, and remit their own checks in payment of bills, making use of the firms’s special contacts with the Express companies in remitting funds.

We are pleased to see Preston, Kean & Co. so eligibly located and so well accommodated in the very heart of the city’s business.

Warren & Keeney & Co.
This well-known real-estate firm has recently removed to the splendid edifice at No. 102 in this building, where they will found ready to serve their numerous customers.

S.P. Lunt
This gentleman, one of the owners of the block, occupies the west basement office. Mr. Lunt is proprietor of the Silver Smelting and Refining Works, which are located corner of Forty-second and Clark streets.

Belden F. Culver.
This popular real-estate owner occupies the first office as you go up stairs at No. 102. Mr. Culver is a large owner of real estate at Lake View and in the city, and besides dealing in his own property, he has a large line left with him for sale. He is one of the vice-presidents of the newly organized Real-Estate Exchange. Parties seeking for homes in the delightful region of Lake View, should not purchase until they have called upon him and examined his various properties.

C.W. Durham.
One of the handsomest basement offices is occupied by this gentleman, who as a civil engineer and surveyor, has peculiar claims upon the public. He rendered efficient service to the New York Central and the Chicago & Northwestern Railway, also as principal assistant-engineer on the New Mexico division of the Texas Pacific Railroad. Mr. Durham has long experience in the sub-division of lands, and thoroughly understands the duties pertaining thereto.

Fitz Simons and Connell.
This firm have a handsome suite of offices on the second floor of the Lunt building. They built the Government breakwater, and are now building the Lincoln Park breakwater, 8,000 feet south of the park. They make a specialty of harbor improvements, bringing all their timber to this market in bulk by means of rafts, as illustrated in The Land Owner for September of last year, and sawing it here. They are builders of the Howe truss bridge, and timber manufacturers. Their office is in the Lunt building, as seen in the engraving, their yard at the corner of Union and 23d streets, and their mill and planer at the foot of Illinois street. The firm is composed of Charles Fits Simons, Chas. J. Connell and General Jas. H. Ledlie, special. 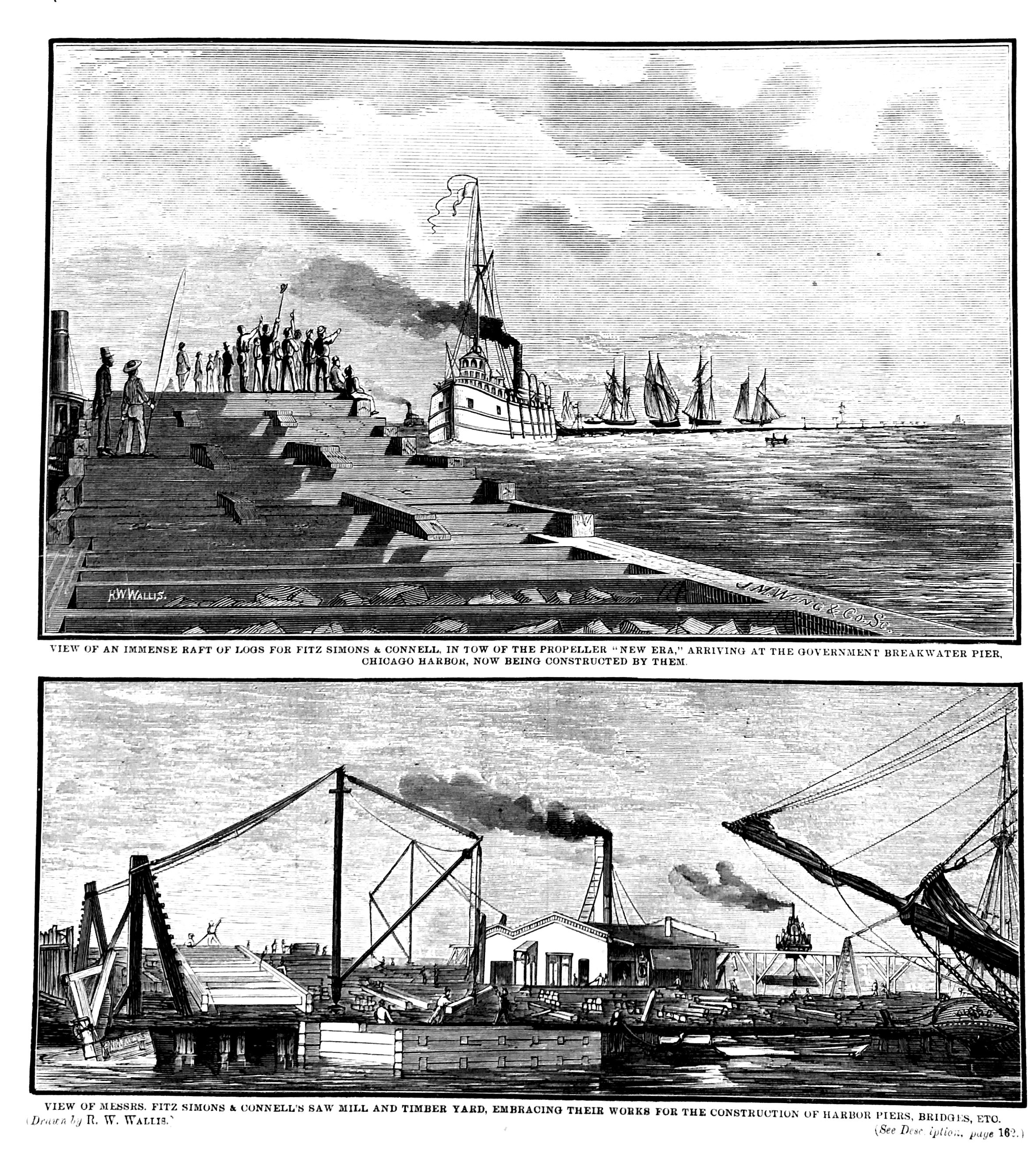 TOP: View of an immense raft of logs for Fitz Simons & Connell, in tow of the propeller “New Era,” arriving at the Government Breakwater Pier, Chicago Harbor, now being constructed by them.
BOTTOM: View of Messrs. Fitz Simons & Connell’s saw mill and timber yard, embracing their works for the construction of harbor piers, bridges, etc.

MANY GREAT BUILDINGS UNDER WAY.
Work Begins on a Number of Large Office Buildings.
Work has commenced in tearing down the Lunt-Waite Building on Washington street preparatory to the construction of the Cook County Abstract and Trust company’s building. The Unity Block is down to the foundations. The Ashland Block is being rapidly taken down. The one-story rookery west of the Borden Block is being removed, to be replaced by the German theater building.

Here are four building enterprises opposite the single block bounded by Dearborn, Washington, Clark, and Randolph streets, all under way. Three of them are to be sixteen-story structures and the fourth is to be fifteen stories in height. The permit for the building of the Ashland Block has been granted, and gives the estimated cost of the structure as $600,000. The Cook County Abstract and Trust company’s building will cost at least as much. The combined hotel and theater projected by the German Opera-House Association will coat $500,000, and the Unity Building will represent an expenditure of between $600,000 and $800,000. Within a few weeks at most these four buildings, which will cost almost $2,500,000, will be under way, while just east of State street the building to replace the Vienna bakery building will be started.

Rapid progress is being made in all of the great building enterprises clustered around the Postoffice Building. The new Monadnock Building, the hotel opposite, the Fair Building, and the Woman’s Temple are being pushed forward rapidly. Probably there has never been a time in the history of Chicago when so many great building operations were under way.