The United States Appraiser’s Building Is a steel building which fronts 60 feet on Harrison Street and 80 feet on Sherman Street, at the northwest corner; 100 feet high, with 7 stories and basement. The fronts are of Connecticut brownstone. Excepting the World’s Fair exhibits, all foreign goods consigned to the port of Chicago are received, examined, and delivered here. Completed in August, 1891

The building had one passenger and two freight elevators. 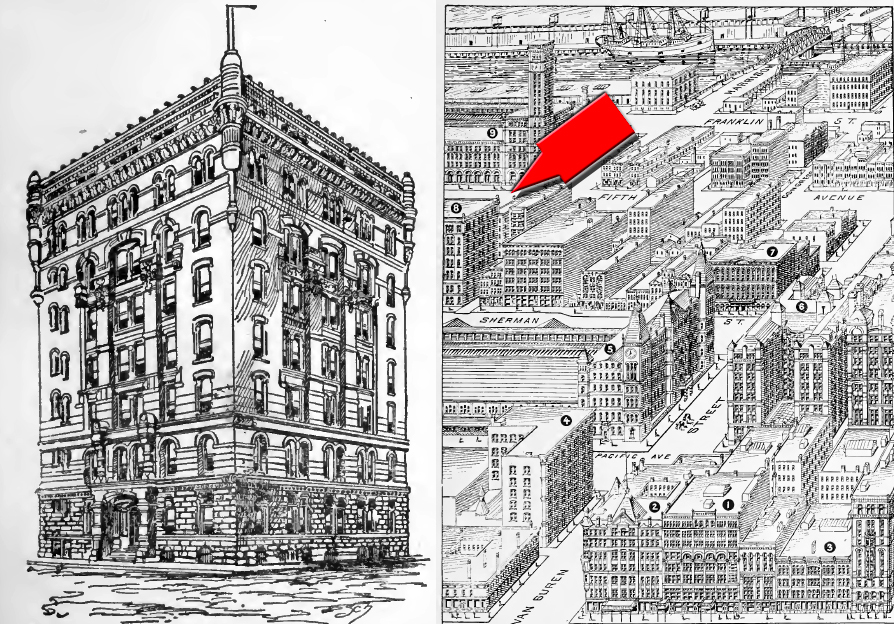 The United States Appraispr’s huilding, on Harrison and Sherman slrppts, was completed in August, ]891, by L. L. Lepch & Son, the contractors, who began work in April, 1889. May 27, 1886, was tho date when an act permitting the sale of the south half of block eighty-seven, known as the Bridnwell lot, for $205,000, made possihle the erection of the new building. August 6, 1888, an additional $200,000 was appropriated and the original dpsigns for the building completed. The first plans, drawn by Freret, found little’ favor with the local appraiser’s office. Freret was a Southerner and hdd designed for the Treasury Department many of the public buildings in the Southern states. His plans called for one story of brown stone, and the structure was to be completed with multi-colored hrick. There were red, white, blue, yellow, green, and terra cotta colored brick all to be uspd in lines und layers with an effect supposed to be highly artistic. Only the foundations and first story were built on Freret’s plans, and not a variegated hrick fouud its way into Chicago. The late secretary Windom torn up the plans for the startling brick building and ordered architret Kirch to draw new plans making tho entire exterior of brown stone. These plans, with the detail by Supervising Architect N. E. Bell, are followed in the present structure.

The building stands eight stories or one hundred and twenty-five feot above basement in hight., and covers an area of 70 x 90 feet. On both street fronts there is a vacant. space of forty feet on each side of the building. The material used throughout is Connecticut brown stone from the Middlesex quarries. The inside copings are of cut Bedford stone, and UIl’ building approaches, with the interior driveways,and constructed of granite. Every window is equipped with rolling steel shutters. The heating plant is the new double system of low pressure, return circulation, steam heating amI ventilating.