BUILDING ERECTED FOR HALL’S SAFE AND LOCK COMPANY.
One of the most attractive views in The Land Owner this month is the fine four-story brick building, erected on Dearborn street, just south of The Tribune building, and near the ruins of the old post office, for the use of Hall’s Safe and Lock Company, on their old site; destroyed October 9th. Our artist has taken great pains to fully show the surrounding ruins in this sketch, as they are the most prominent and well remembered of any of our old landmarks. 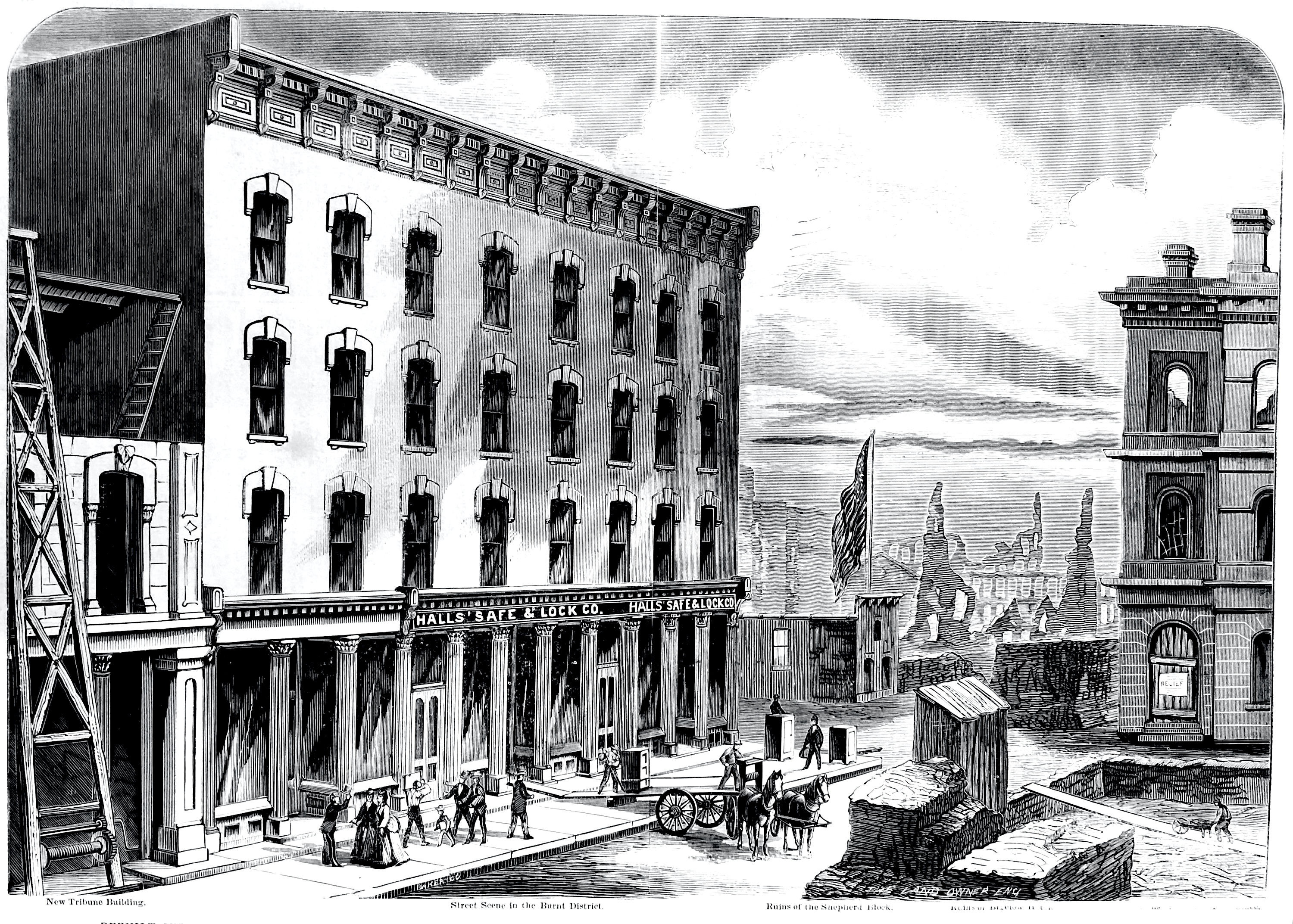 Rebuilt Chicago.—Building Erected for Hall’s Safe and Lock Company, Old Site, on Dearborn Street, Between Madison and Monroe. Chicago Tribune Building is being erected on the left side.

Several months before the fire, Hall’s Safe and Lock Company moved into their magnificent wareroom, which had been specially erected for their use and which was one of the very best and well appointed in the city, and at that time everybody had a good store. To-day, eight months from the conflagration, they are back in their old spot, with a better store and in a better building than before. As you enter this large and well lighted wareroom, filled to repletion with safes of all sizes, vault work, etc., you would scarce imagine that so short a time ago it was in utter ruins. Its rapid replacement is but another evidence of the wonderful recuperative power of our burnt out business men. And the fact that the capacity of the great factory at Cincinnati is taxed to the utmost to fill the orders of the Chicago house for safe and vault work, attests the credible manner in which these popular safes came through the fire. 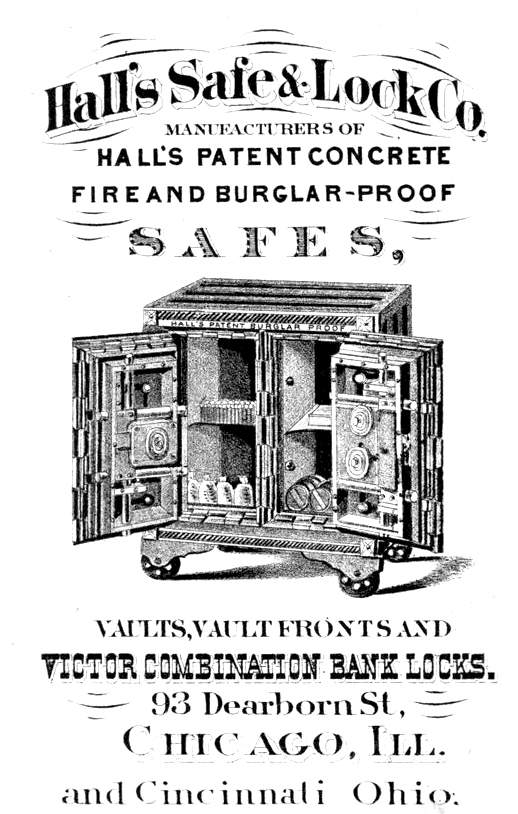 The factory of Hall’s Safe and Lock Company, at Cincinnati, is acknowledged to be the largest of its class in the world. Its several departments—twenty-eight in number—occupy more than ninety thousand square feet of floor space; or, in terms more readily appreciated, OVER TWO ACRES. Recent additions of space and machinery give the establishment a productive capacity of $1,500,000 per annum, and necessitate the employment of six hundred workmen, whose wages exceed $7,000 per week. When it is understood that these workmen represent not less than 3,000 people, one of the advantages of such an emporium of industry to the population and industry of the country be readily appreciated.

We cannot, in our limited space, give a description of the economy of these works, as their different departments, wherein fine mechanism is wrought by skilled workmen, would require a volume to fully explain. As long ago as 1843, Mr. Joseph L. Hall founded the works from which sprang the present establishment. At that date, safes were in limited demand, and but for hands were employed, the product of whose labor, for the first year, amounted to $3,000—less than half the sum of the present weekly pay-roll. Mr. Hall, although a young man, was thoroughly skilled at the business, a practical, industrious, thoughtful and clear-judging artesian. He foresaw the importance of his chosen work, the opportunities therein, and, to some extent, the increased demand for its product that must eventually spring up in the great and growing West. He was an inventor as well as an artisan, and with better luck than most of the great inventors of the world, he found the age and time comparatively auspicious for the introduction of his improvements. If improvement appears possible or practicable in a safe or lock, or in any detail of their construction, no time or expense are spared to effect its accomplishment; and thus this great factory is continually progressing, and continually refining the excellence of its handicraft. The nucleus of the great workshop, as first inaugurated, remained but a short time in in its original dimensions, for when the people were properly acquainted with the original Hall Safe, although very crude and imperfect, as compared with the substantial, secure, elaborately-finished and artistically-ornamented Hall’s Safe of to-day, the demand for it soon exceeded the supply, and facilities for its manufacture were largely increased. Such has been the occasion of the various successive enlargements from that time to this, that we find the works occupying almost an entire square, and the warerooms unsurpassed in size and elegance by any business in the world. 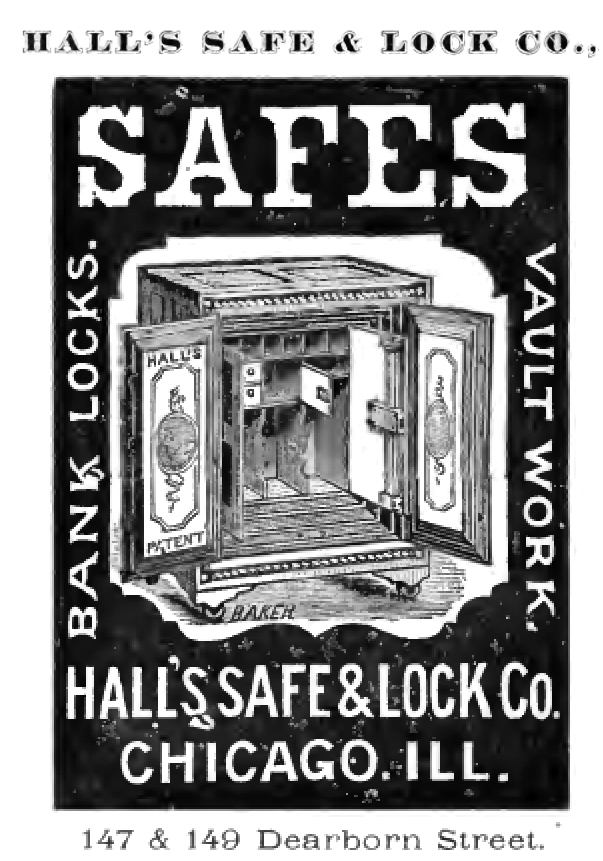 The writer of this sketch well remembers the smoky days immediately following our great fire, when the different members and employes of the Chicago house were to be seen quietly going about among the smoldering ruins, with tools for opening safes in their hands. Their task was no easy one, for a large number of their safes were in use here. Hundreds were opened each day, the result being, in nearly all cases, satisfactory both to the owners and the makers. It is a good evidence of the durability of Hall’s Safe to see the same parties who used them before the fire, now replacing them in their offices.

Vault work is a great specialty with this company, and they are building them in a large number of our new business blocks.

The Land Owner congratulates the Chicago house upon its re-establishment in the old quarters in the burnt district, so visidly shown in our illustration. 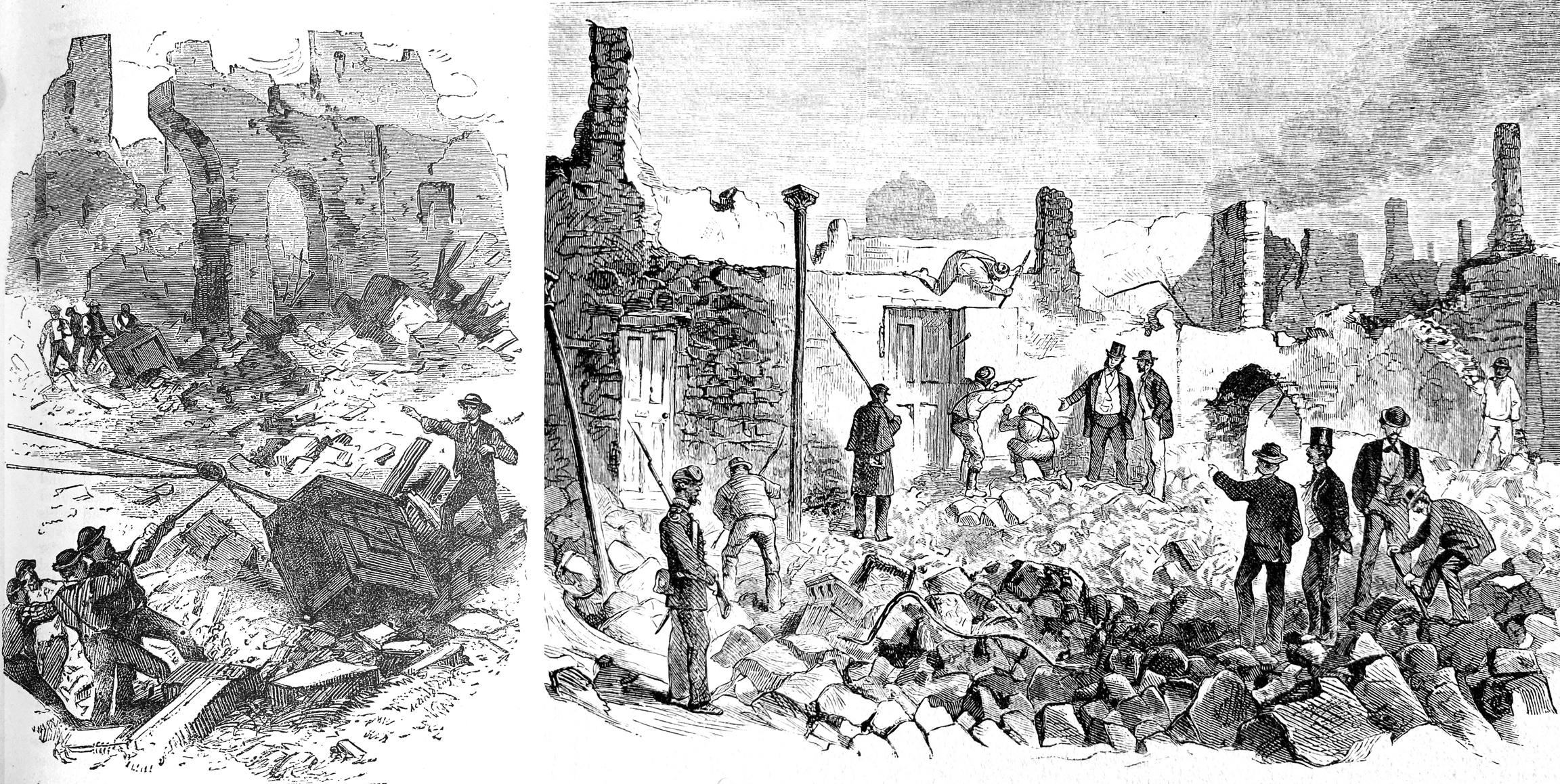 The Hauling and Opening of the Vaults After the Fire
Harper’s Weekly, 1871

HALL’S SAFES.
Hall’s Safe and Lock Company are now in their new and commodious salesroom, 67 Washington street, where all custodians of valuables can be suited. The Fifth National Bank of this city has just closed a contract with this Company for the construction of their large burglar-proof vault. This vault is to be made of their drill-proof steel, with all their latest patents, which includes about all of the only secure methods for constructing burglar-proof work. This concern has been manufacturing their dovetailed burglar-proof safes for the past twenty-three years, and there is no instance where one of them has ever been robbed of a dollar.

THE WINDSOR EUROPEAN HOTEL.
On Dearborn street, near Madison, Samuel Gregstin, proprietor, well deserves the popularity it enjoys. It is central, cozy, and the unfailing resort of all who have at any time given it a trial.

THOMPSON’S RESTAURANT.
No, 147-153 Dearborn street, is a famous resort for ladies and gentlemen. As to its popularity, it only need to be said that 2,500 persons take their meals here daily. It is furnished and conducted in the most approved manner, and the menu, in variety and culinary preparation, will satisfy the most fastidious. The tables will accommodate 450 to 500 persons at a time. 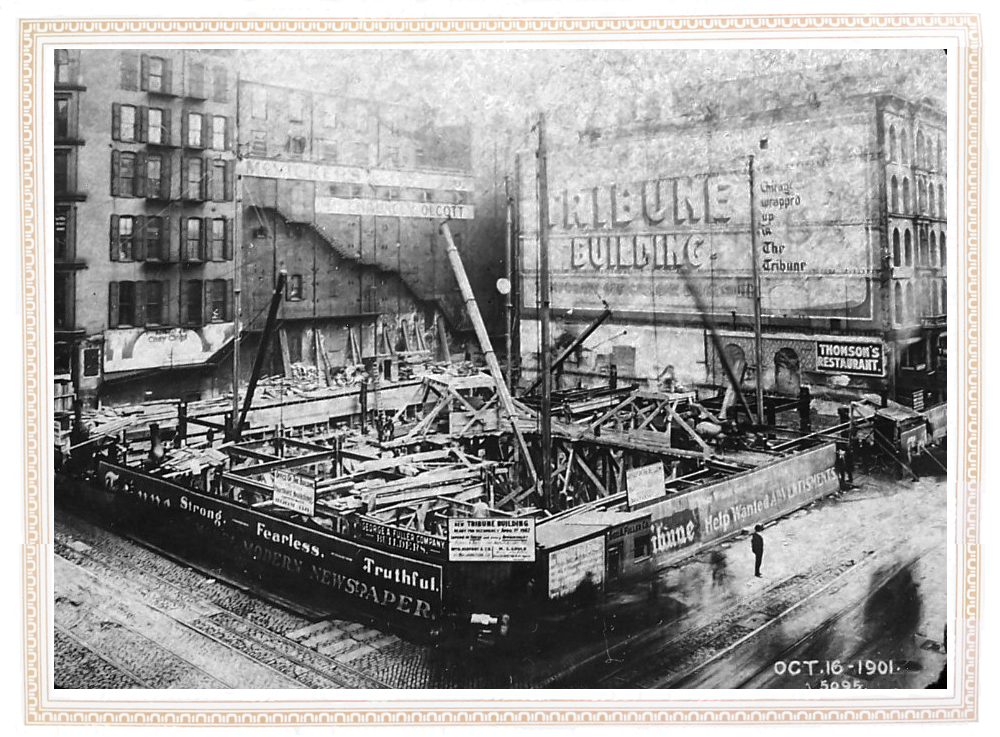 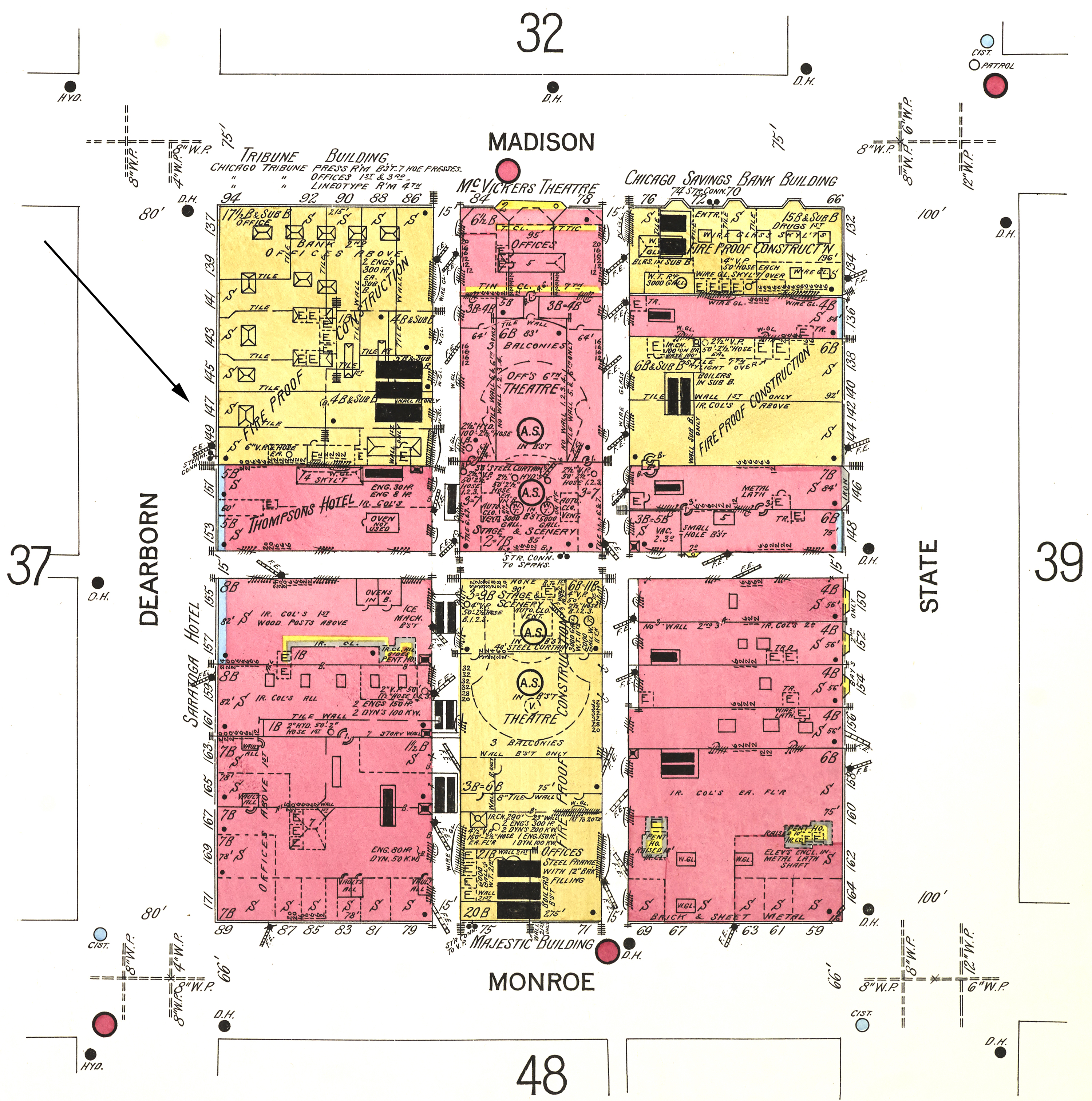