THE CONTINENTAL HOTEL, on the southeast corner of Wabash Avenue and Madison Streel, occupies the site of the Clifton House before the fire of 1871. Messrs. Jenkins & Holmes had the lease of lhat property at the time of the fire, and when they were burned out they re-built their hotel where ihe present Clifton House ⑥ stands.

The building that was erected on the site of the old Clifton was intended for the use of stores and offices, but upon its completion, the Chicago Public Library was located on the upper floors and the main floor was occupied principally by the firm of Field. Benedict & Co, wholesale clothiers. In 1876, the Public Library was removed and the three upper stories were then converted into a hotel. Obadisah Sands opened the Sands House in that building during the above year, and ran it until 1880, when Henry Berg & Son leased the premises for the same purpose, and changed the name to the Hotel Frankfort. They continued until October 1, 1882. Then Mrs. Elizabeth Hennessy took the hotel, renovated and refurnished it throughout, and changed the name to the Continental Hotel.

The building has a frontage on Wabash Avenue of one hundred feet and one hundred and thirty-two feet on Madison Street. The main entrance to the hotel is located on the former thoroughfare, and leads to the large office on the second floor, on which are also located the reading, billiard and dining-room. The house has one hundred and twenty guests’ rooms and can accommodate three hundred people. It is run on the American plan, and is a popular stopping place for the theatrical profession. B. D. Spencer is lessee and proprietor.

The rooms to be occupied by the Free Library, in the Herrick Block, corner of Madison street and Wabash avenue, are nearly ready for occupancy, and will be taken possession of about the 1st of March. The old books will be removed from the tank as soon as the shelves are put up, and the new volumes will be delivered there by Jansen, McClurg & Co. It is doubtful now, owing to the labor involved in cataloging the books, if the circulating department will be open before September.

The Chicago Public Library—”Free, gratis, all for nothing”—as Samuel Gerridge would observe—is an established fact, if the formal opening of the doors at 9 o’clock yesterday morning can make it so. This consummation has long been devotedly wished for. The ears of our people have been filled with talk of this same Library for many a day, and impatience was fast overcoming philosophy. 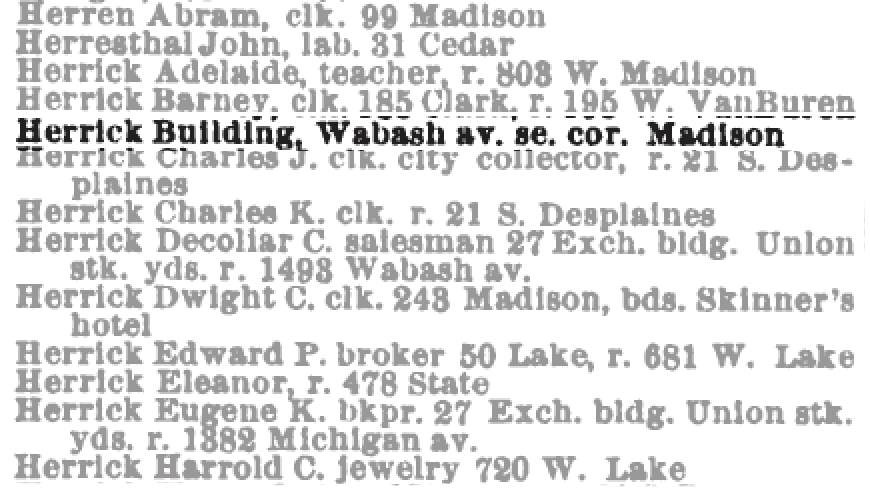 The birth, fosterage, progress, “battles, sieges, and fortunes” of this institution have been so often chronicled that there is no necessity to allude to them further. Any reference hereto would involve a dragging in of “our great calamity,” etc. Therefore, let the Library be considered in its existing condition, and let antecedents take care of themselves.

There are upon the shelves, all uncatalogued, but pretty well arranged, some 20,000 volumes—some eminently good, and and some trashy enough for the worst kind of a second-hand book-store. The donations are, very many of them, seedy in appearance, but their contents are, generally speaking, useful if not amusing. The contributions of sets of books by many English firms are creditable to the generosity of the book-dealing Britain, but books of reference are more numerous than romances, histories, and the productions of the poets. The American contributions are decidedly diversified, and comprehend everything from philosophical dryness to rhapsodical novelism.

On the other hand, the books purchased by the Library authorities are of an exceeding good quality, and present a most inviting aspect on the exterior. Neither does the matter between the covers disappoint reader. This goes to show that the only way to establish a decent library is to fill its shelves with books purchased from its own funds—books that will suit all tastes and not be condemned to “vex the school-boy’s brain or molder in a heap of learned dust.”

Five cases of fine volumes have just arrived from England, and will immediately p;aced in their proper receptacles. Catalogues are preparing, and will very soon, it is expected, be ready to put in the hands of visitors.

Hardly any eclat attended the opening yesterday. There were not more than two dozen persons present at 10 o’clock, and the number of names on the official register was rather small. Through the day the same want of interest was manifested, probably from the fact that the weather was cold, blue, and intensely disagreeable, operating unkindly on the literary proclivities of the ladies. The Librarian is sanguine that this day, if fine, will add immensely to the number of callers.

The rules and regulations appertaining to the drawing of books have been already published, but as the following comprise the pith of the instructions, a republication may be in order: 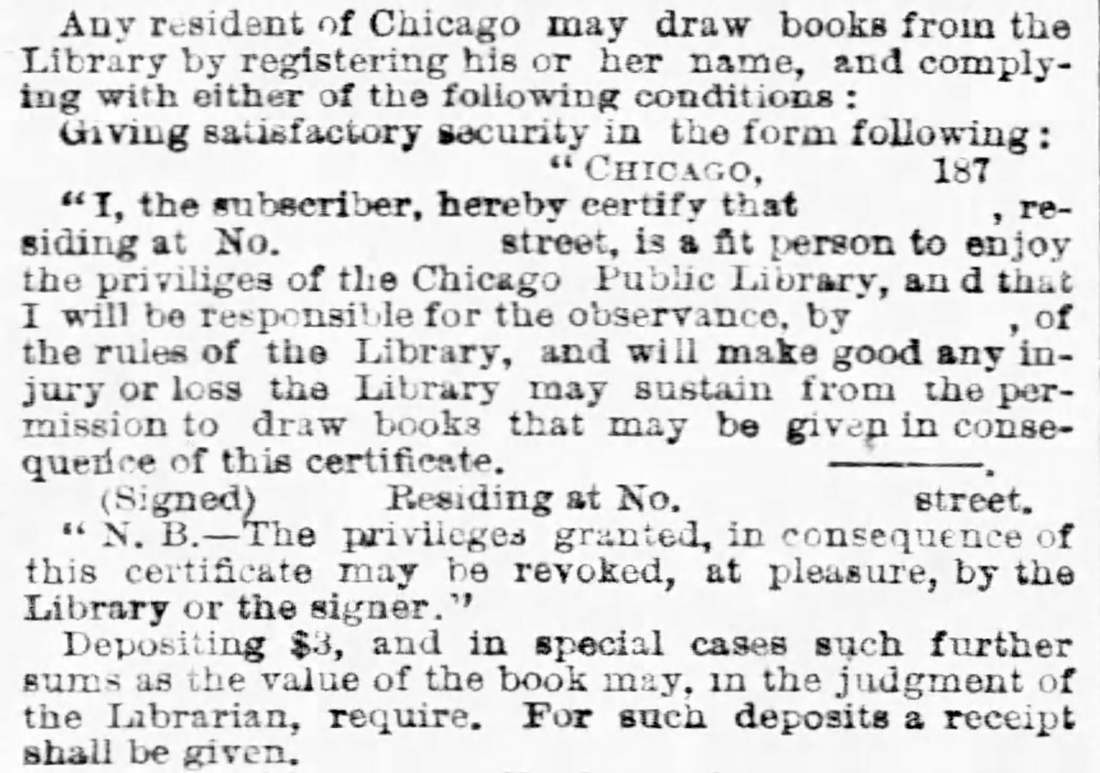 After looking over all the rules, fourteen in number, an unprejudiced person is likely to come to the conclusion that business could be done with some what less of red-tape.

The Chicago Public Library opened its circulating department on the 1st of May, 1874. This circulating department had, therefore, been in operation two months at the close of the official Library year, June 30. The progress of the institution in public favor is shown by the facts stated in the report of Mr. Poole, the Librarian. The total number of books in the Library May 1 was 17,355 volumes. Of these a large number are books of reference, which are consulted by the visitors in the reading-room; this included, also, the costly collection presented to the Library by its friends in England. The number of volumes available for use in the circulating department was about 13,000. During the nine weeks in which the Library has been open the daily average number of books given out was as follows:

Commenting upon these figures, Mr. Pole justified in saying:

It will be seen from these statistics that the Chicago Public Library, with its collection not half completed, and without a printed catalogue, has in the first two months after its opening, taken rank for its circulation, with the largest and most successful public libraries of the country. This position, there is every reason to believe, it will hold and improve upon. With no competing library in the city, and with a population of nearly 500,000 looking to it for reading, it seems now impossible to fix any limit to the use which will be made of its books when the books are fully supplied.

It is true that in Boston and New York there are other libraries from which the public draw books, but, nevertheless, the figures of the first nine weeks of our Library are none the less astonishing. To a large portion of our population the Library is still unknown, and the mode of procuring books not understood. The number of books is so limited that many do not apply under a conviction that they cannot get what they want, or that when there is but a single copy of a book the chances of getting it are small. What is needed is more books. Unfortunately there is but a very small fund available for that purpose this year, but there is an admirable opportunity for those who have the means to endow the institution with a liberal sum to that end. Had the Chicago Public Library the means of providing 50,000 volumes for circulation, there is no reason to doubt that it would in a very short time have a registry of 25,000 book-borrowers,—thereby contributing pleasure, entertainment, and instruction to as many families, the larger number of whom have probably no other means of obtaining books at all.

Excerpted from Report of the Board of Directors for 1874.

In the meantime, and until the condition of this trust admits of the use of funds to erect commodious and proper buildings, the Board think they have been fortunate in finding ample, well-lighted, and conveniently located-rooms, near the great centers of street- railroad transit, at the south-east corner of Madison Street and Wabash Avenue. For a rental of $5,000 per annum, and with the privilege after one year of three years more, they have secured the whole of the second story, 96 feet front on Wabash Avenue by 140 feet in depth on Madison Street, in the Herrick Block. Besides these are included the half of the third and fourth stories of the same block. One-half of the second floor, lighted the whole length of Madison Street, is assigned and fitted up for the visitors to the reading-room. The other half contains the alcoves, counters and delivery-room of the Public Library. The present shelving capacity of this room is 64,000 volumes, and additional cases may be added, when they are needed, to contain 15,000 more volumes. The delivery room is divided by a light rail into two separate compartments — one for gentlemen and the other for ladies. These quarters were first occupied about the 16th day of last March. The Library Department was first opened to the public on the 1st day of May, 1874. Within one month after the opening, the number of persons registered as borrowers of books has reached 2,524, and the number of volumes issued was 7,679. During the year, the Reading Room has been visited, as will be observed by the statistics, by some 134,000 visitors.

THE LIBRARY.
The number of books now on hand is 18,183 volumes, of which there have been added during the past year 11,331 volumes. We had on hand before receiving the new books ordered to open the Library, 9,279 volumes, of which number 4,669 volumes were received by donation from England, Germany and other countries, and some 2,500 volumes from our own citizens.

The total number of volumes ordered in anticipation of the opening of the Library, was about 27,000 volumes, nearly 10,000 of which have been put upon the shelves. These are nearly all the American publications ordered by contract with Keen, Cooke & Co., of this city. The whole number of volumes, when all the works now ordered are on our shelves, will foot up nearly or quite 37,000 volumes.. The report of the Librarian, accompanying this report, shows that since the., opening of the Library we have registered 2,573 borrowers — 1,905 males and 668, females. We have issued 7,659 books to readers, and the circulation for the week ending May 30, 1874, was 2,623 volumes — about\ one-ninth of the whole number of volumes on our shelves. 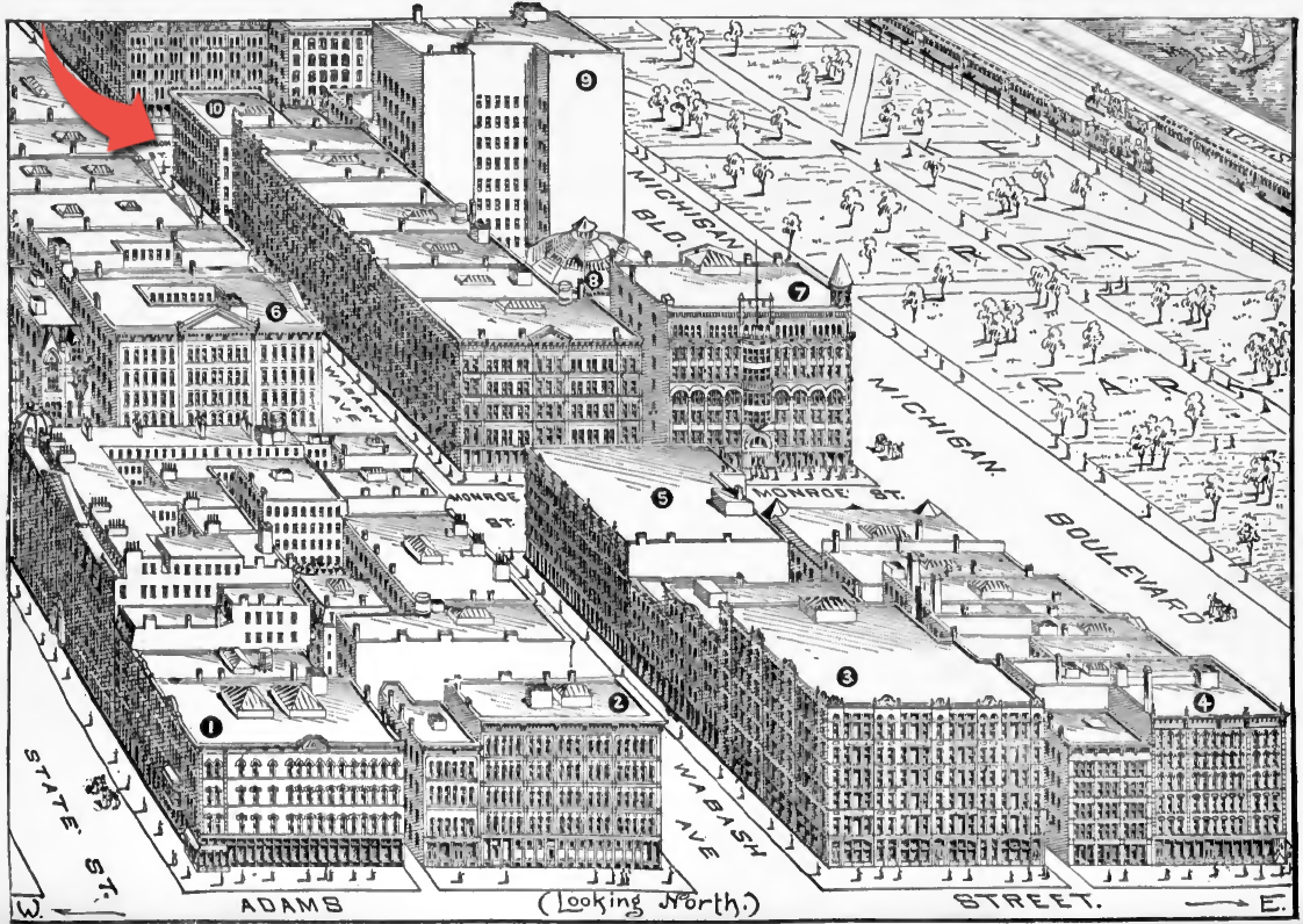 Southeast corner of Wabash Avenue and Madison Street, carries us to the end of the picture, and to a building which was once the home of the Chicago Public Library; and here Librarian Hild began as a lad to learn his profession. The store-rooms are occupied by the Woman’s Exchange and a large millinery establishment. The building is a stone-front of 1873, 120 feet on Madison Street, 100 feet on Wabash Avenue, 60 feet high, 4 stories, 150 rooms, 3 stores, and 1 elevator.

At Madison street and Wabash avenue the old Continental building, built right after the fire in 1871, will be replaced by the new John B. Mallers’ building, twenty stories high and costing $1,500,000. The Continental was a loop landmark. In the old days it was headquarters for theatrical people.

Continental Has Some Veterans.
Some of the tenants of the Continental hotel had seen that hostelry of its youth, when it was as popular among visitors to Chicago as the Bath was in England as a pleasure resort. They had met Booth and Barrett there in the old days when Patti was a girl. They held on a long time, these old roomers who never moved in a city of changes, but the lease ended May and the old had to give way to the new. 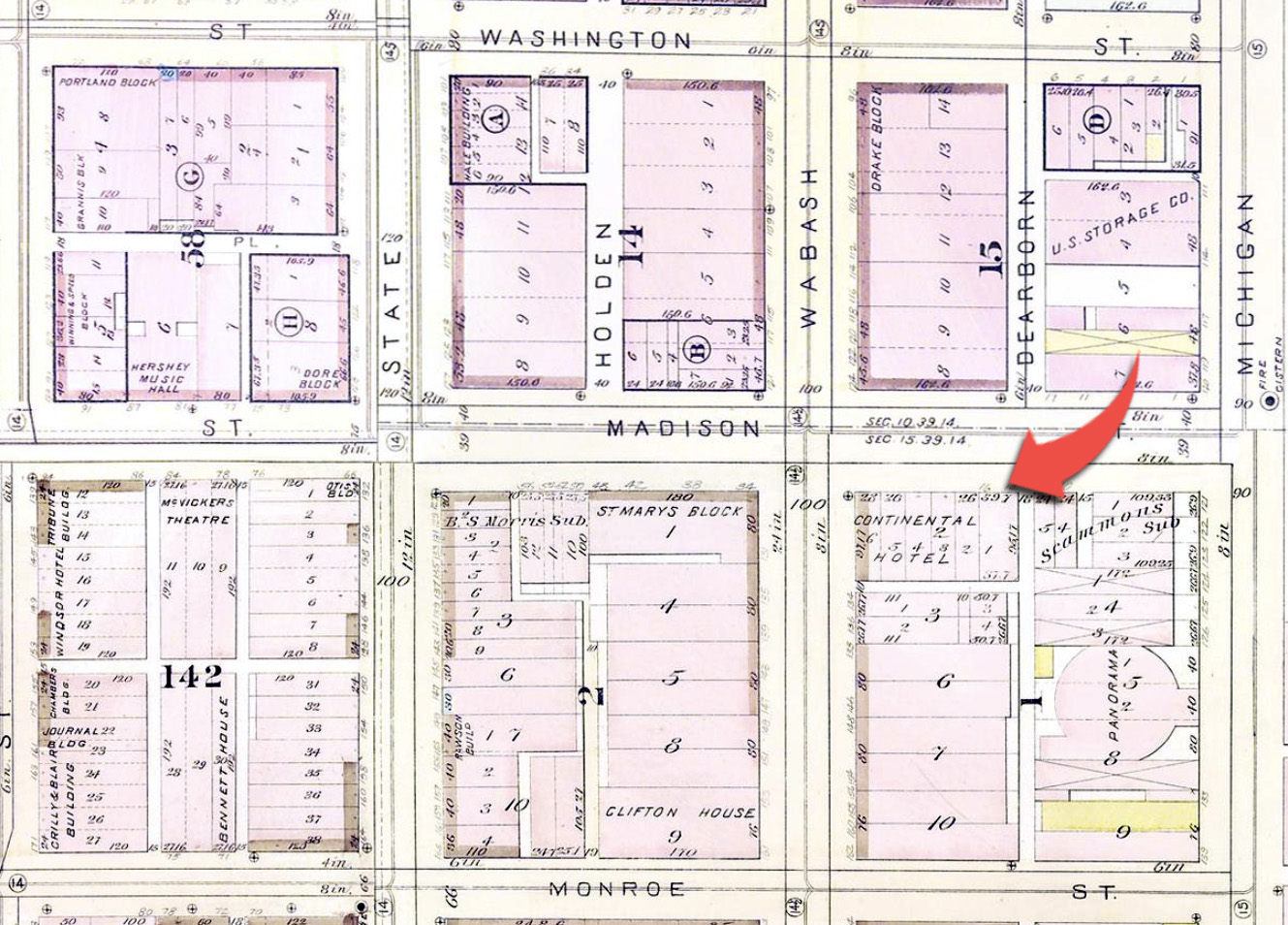