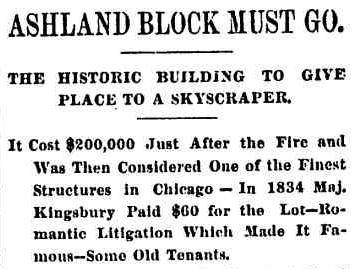 Chicago is to lose a landmark—Ashland Block. Many of its tenants have had their business home within its walls for a score of years. They are all under notice to leave May 1. As soon as they take their departure the work of razing the building will be begun. It will be replaced by one of the million-dollar, sixteen-story, structures that are a familiar feature of Chicago.

Ashland Block was built by Gen. S. B. Buckner of Keniucky soon after the fire, and took its name from the Confederate chieftain’s home in the blue grass country. The history of the building and the property at Clark and Randolph streets has many points of interest. The litigation over the property, if nothing else, has made it famous.

In 1834 Maj. Kingsbury, who was one of Gen. Scott’s officers and stationed at Fort Dearborn, bought two lots at Randolph and Clark streets. Both were eighty feet front on Randolph and had a depth of 180 feet. For the corner upon which the Ashland was subsequently built he paid $60, and for the lot adjoining on the east $50. James Kinzie, the owner, thought $110 for the two pieces of ground a fairly good real-estate operation. May 15, 1890, the corner lot with a strip forty feet wide taken the north end sold for $500,000. The other lot is still held by one of the Kingsbury heirs. Mrs. Jane C. Kingsbury, the widow of the original purchaser, is still living at Old Lymne, Conn. She is well advanced in years, but retains a lively remembrance of early days in Chicago. Maj. Kingsbury leased the lot, and the original frame building upon it was replaced by a three-story business block, which was erected by Dr. Evans, the lessee. This structure was with the surrounding buildings converted into ashes by the great fire.

Made Famous by Litigation.
At this time a suit affecting the title to the property was pending. When Maj. Kingsbury died in 1855 he left the property at Randolph and Clark streets to his son, Henry W. Kingsbury, and Mary K., his daughter, who had married S. B. Buckner. There was no partition of interests, the title being held jointly under the will. At the breaking out of the war Gen. Buckner, as is a matter of history, joined the Confederate army, and young Kingsbury, a Lieutenant’s commission, joined the Federal army.

To provide against possible confiscation Gen. Buckner and his wife conveyed to Lieut. Kingsbury their interest in the Chicago real estate, with the understanding that at the end of the war it was to be reconveyed to Mrs. Buckner. Kingsbury fell at Antietam. lHe left a young wife, a woman of great attractions, who shortly after her husband’s death gave birth to a son. By the terms of Lieut. Kingsbury’s will Mrs. Buckner’s share of the property was devised to her. The will was declared invalid by the Cook County courts, and after the war Gen. Buckner and his wife began proceedings for the property.

In 1872 the suit was decided in their favor. The lot fronting on Randolph street upon which the museum now stands, together with forty feet off the north end of the corner lot, which strip joined the lot first mentioned in the rear, was set apart for Henry W. Kingsbury, the posthumous heir. Mrs. Buckner’s part had a Randolph street frontage of eighty feet and 140 on Clark street.

The Ashland Block
From The Land Owner
August 1872

Many Old Tenants.
The Ashland Block was at once erected and cost $200.000. It was designed as an office building, and at the time of its construction was one of the finest of the kind in Chicago. Many railway lines made their headquarters there, and the corner room of the first floor has for years been occupied by the Fort Wayne road as a ticket office. The Illinois Central’s ticket office is a familiar feature of the Randolph street front. Up-stairs the Pennsylvania company has had offices for many years. Other tenants of long-standing, nearly all of whom have been there since the building was erected, are: Coburn & Thatcher, Senator John Humphrey, James P. Root, P. L. Sherman, F. J. Loesch, George Willard, Lincoln Ice company, Hutchinson & Luff. Judge Anthony had an office for many years in the building before his election to the bench. Edwin Walker was one of the lawyers whose shingle long adorned its historic walls. F. A. Winston was another. S. Corning Judd, before he was Postmaster, was a familiar figure about the building. The Chicago Milwaukee and St, Paul for a long time had a ticket office on the Clark street front.

Sold for $500,000.
Mrs. Buckner died a few years ago and by will left the property to her husband. Last May Gen. Buckner sold the corner to A. J. Alexander of Woodlawn, Ky., the well-known breeder of horses. The purchase price was $500,000. The new owner being desirous to increase the income from the property at first concluded to add a few stories to the original building. Then there were negotiations looking toward a ninety-nine year lease of the property. These were dropped and recently Mr. Alexander determined to erect an entirely new block. His agent, Mr. Waller, at once notified the tenants that their offices and stores must be vacated by May 1. The only tenant who had a long time hold was a barber whose lease had two years to run. It is said that he received $5,000 for the surrender of the contract, although his rent was but $1,500 per year. It is also said that the contractor who will tear down the present building will receive as compensation the materials which compose it.

“It seems a pity to tear down the old building.” said D. W. Mitchell, for years the agent of Gen. Buckner. “The block, unlike most of those built just after the fire, was constructed of the best materials, and is as solid now as it was fifteen years ago. The partition walls are of brick clear to the roof and there isn’t a check or crack to be found anywhere in the plastering.”

Young Kingsbury, who owns the Randolph street lot, had several suits over his property. They were instituted in his behalf by his mother, and were in the nature of damage suits against Mr. Sperry, who was a sort of receiver or curator of the young many’ estate. Mrs. Kingsbury subsequent to her husband’s death was married to William Lawrence of Rhode Island. After his death a Belgian Count attached to the legation at Washington became her husband. The nobleman dying she the wife of an Englishman, and now lives in Great Britain. 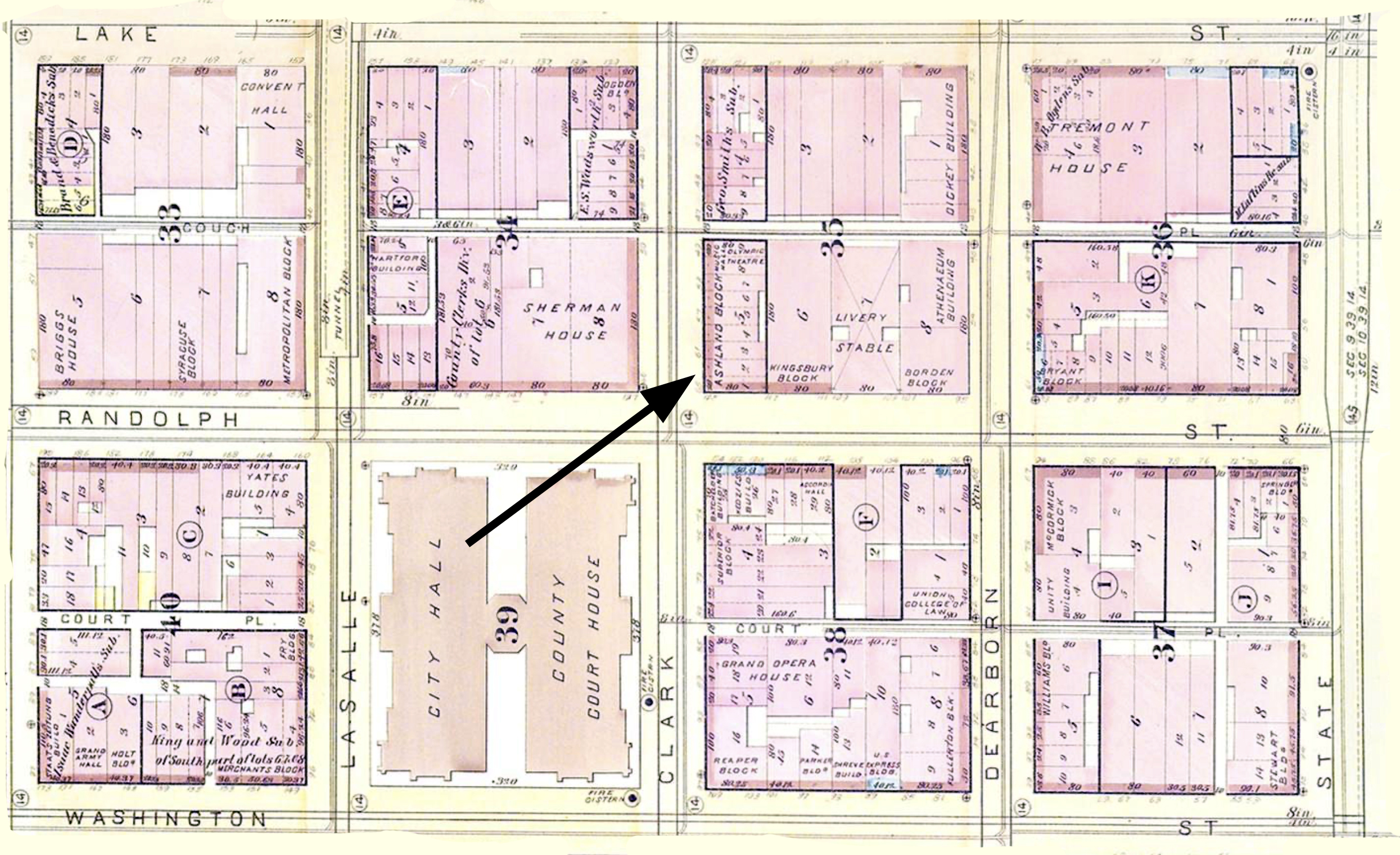 PROGRESS ON THE ASHLAND BLOCK.

Plan for a Giant Struoturo to Be Opposite the Sherman House

The old Ashland Block will soon be a thing of the past, and a now sixteen-story offce building, one of the handsomest of its class, will be erected in its place. B. A. Waller and L. Brodhead have leased the northeast cornet of Randolph and Clark streets from A. J. Alexander for a term of ninety-nine years, and will begin work at once on tne new building .

D. H. Burnham has prepared the plans for the new block. It will have a frontage of 140 feet on Clark street by eighty feet on Randolph street. It will be sixteen stories high, of steel construction, and thoroughly fireproof. The building will be faced with light gray, stone, brick, and terra cotta. The main entrance to the building will be from Clark street and twenty-one feet wide. The windows of the lower stories will be arched at tho third story. From the third story seven bays will extend up through both fronts to the sixteenth story. The building will be surmounted by a full Corinthian cornice. All the exterior details will be classical. The main entrance and the entrance from Randolph street will open on a vestibule which will be with mosaic and finished in marble. Seven elevators will be arranged in a semicircle with a provision for adding two elevators to this service. The building will contain 350 offices above tho tank floor. A light court 28 x 50 feet will extend through the rear of the building. The aim of the projectors is to build an office which shall be first-class in all without any extravagant expense.