THE HALE BUILDING, CORNER WASHINGTON AND STATE STREETS
This structure adds another elegant and attractive edifice to the long line of imposing fronts on State street. It is five stories in height, 90 by 100 feet on the ground, of the modern style of architecture, and was built from the designs of E. S. Jennison, the architect of the Singer building, just across the road. Its fronts on both sides are marked by fluted horizontal tracings in sections, and small serpentine columns. 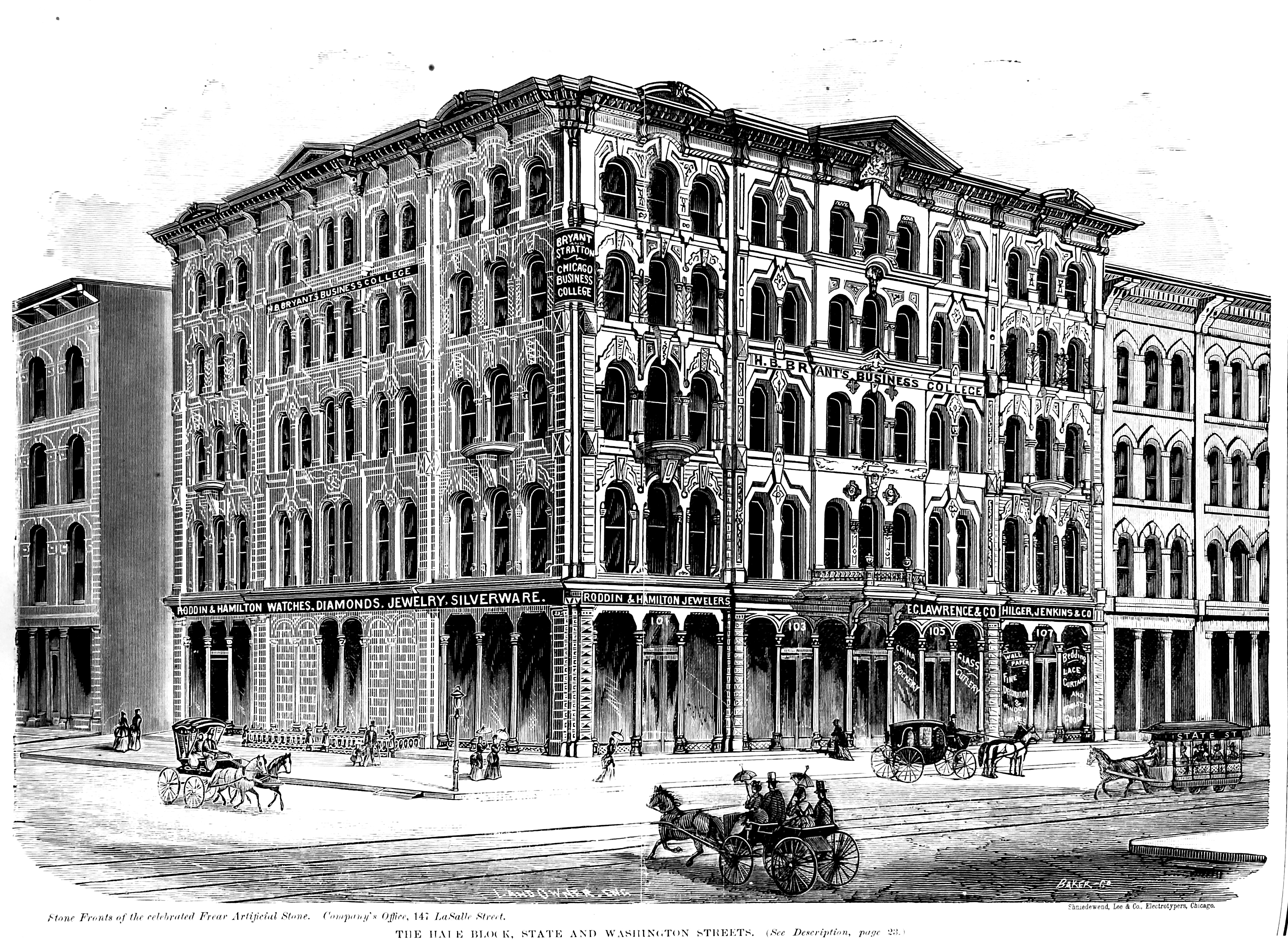 RODDIN & HAMILTON.
The large corner store of this block is occupied by Messrs. Roddin & Hamilton, one of the leading jewelry firms of the city. The large windows on both streets afford this firm ample light for the display of their large valuable stock. The aggregate surface of the windows is 1,800 feet. The floor is tiled with white Vermont marble. The counters are unequalled in the city in beauty and richness, being of four varieties of marble, in panels and Egyptian busts. The outer course of the panels is of the dark Columbian marble; the next of Italian clouded; and the centre of the wonderful new Winooski marble—a red, variegated stone, superior in beauty to the Tennessee (which it somewhat resembles), and taking a polish like the Scotch granite. Each of the four counters is ornamented between the panels with six of the Egyptian heads, delicately carved in white marble. Never has so much beauty been thrown into the usually neglected bases of shop counters as here appears. The general effect of these pieces of work is echoed in the walnut panels of the large cabinets standing by the walls, making the whole place a charming resort. The location of the store is in every way, an eligible one, being, as it is, directly opposite of Field, Leiter & Co.’s great retail establishment. Messrs. Roddin & Hamilton are surely to be congratulated upon their new quarters, and an ever generous Chicago public will not fail to give them a fair share of patronage.1 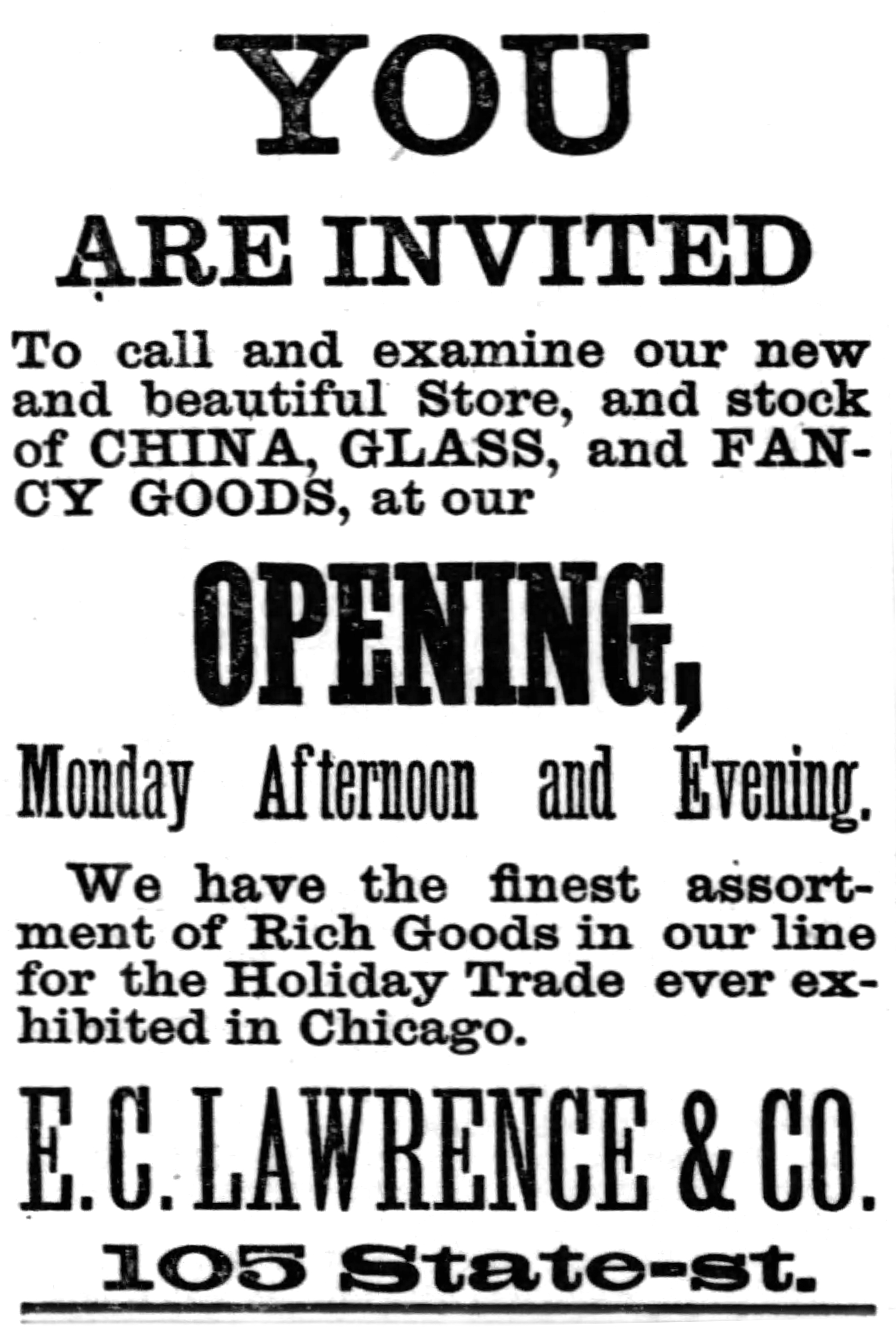 R. C. LAWRENCE & CO.
This firm, importers of China, crockery, glassware, table cutlery, silver plated ware and fancy goods, occupy the elegant store in this block, No. 105 State street. Their stock is a most complete one, and challenges competition in the West, while their large store is fitted up in an elegant and substantial manner. They still continue to sell those rare white French China sets, of 136 pieces, for $35.00, notwithstanding the advance in these goods, a fact which all our lady readers should make a note of, as it directly concerns them. No store in this line of trade in the city equals that of E. C. Lawrence & Co., who are establishing for themselves a very enviable reputation for fair dealing.

HILGER, JENKINS & CO.
In the Hale Block we also find another old Chicago house, that of Hilger, Jenkins & Co.. successors to E. G. L. Faxon, dealers in paper hangings, window shades, bedding, etc. This is a representative house. Its origin dates bak to 1853—twenty years—when Mr. Faxon began trade at No. 70 Randolph street. In 1860 he removed to 70 Lake street, and thence to 74 and 76 Lake street in 1866, at which place the firm were located at at the time of the great fire, and where they suffered a heavy loss.

But the activity and energy that built this house up, could not stop with this catastrophe. They went immediately to work to construct a large store at 648 and 650 Wabash avenue, where they have transacted business since the fire, up to their removal to their superb new quarters in the Hale building. 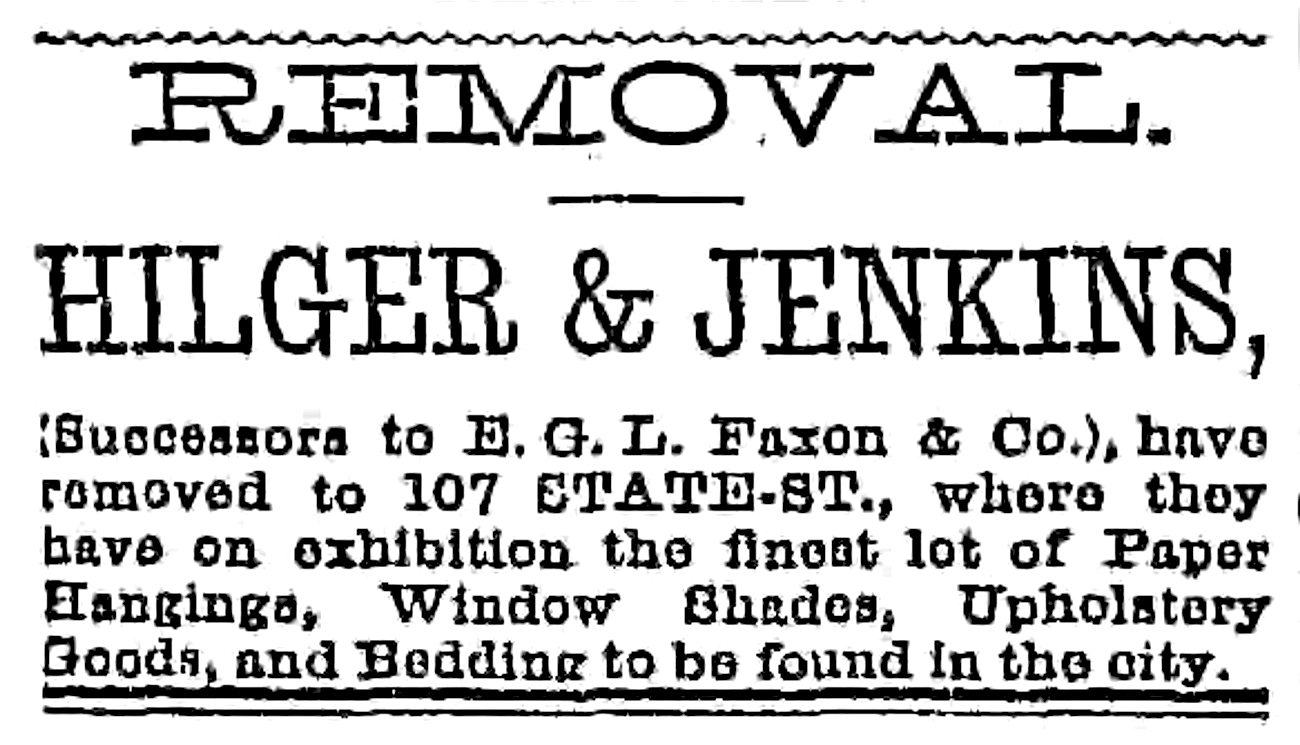 F. R. Hilger, now the senior member of the firm, was a partner in, and business manager of E. G. L. Faxon & Co., for fifteen years, and is well known to the public and business community. Mr. S. B. Jenkins, junior partner, was confidential clerk of E. G. L. Faxon & Co. for twelve years. These are the gentlemen who, since the fire, have succeeded to the old business. Mr. Faxon, brother of the late E. G. L. Faxon, has charge of the paper hanging department, and superintends the work. His large experience of eighteen years in this branch of the business, is a sure guarantee that any work done by the firm will be fully up to the times.

The firm do a very large wholesale and retail trade in wall paper, window shades, bedding and upholstery goods. In this line of trade they are the oldest house in the city or the West. Their new store is very elegant in its appointments, and the firm is now better accommodated for the transaction of business than they ever have been before. We congratulate them upon their extremely eligible quarters and their chances for success. Our new Chicago, with the ten thousand new residences that are soon to arise, will require their artistic decorations.

BRYANT & STRATTON’S COMMERCIAL COLLEGE.
This institution, so much a part and parcel of Chicago and the West, and so closely appied tom our commercial prosperity as it is, could not be destroyed bybthe burning of its material chattels. Mr. H. B. Bryant, after the great fire, immediately leased a large church, and re-established his great school. Now the college has gone into its elegant new quarters in the Hale Block, where it is better accommodated than ever before, and where it sis again on the high road to prosperity. It occupies the third floor of this elegant building, which is situated in the very heart of the business section of Chicago, at the point where converge the lines of street cars, rendering it thoroughly accessible to all parts of the city.

This flourishing institution of learning is too well known in the Northwest to demand especial attention as to describing its workings in detail. Young men there acquire, by practical experience, a knowledge of business, which at once fits them for situations in any of our leading mercantile houses.

A $1,000,000 MEMORIAL BLOCK.
The Columbus Block to be Erected on One of the Prominent Corners.
A million-dollar memorial building is to be erected on the corner of State and Washington streets. This corner is owned by Higgins & Furber and it has long been a question real estate men as to what disposition would be made of it. Any number of negotiations for its purchase or lease have been begun, but at last the owners have decided to improve it themselves. The corner has a State street frontage of 100 feet and a frontage on Washington street of 90 feet. Early next spring, when the leases of the old building terminate, work will begin on a sixteen-story building to occupy the corner. The owners of the corner desire to erect a building which will be an ornament to the city, and the interest of the public in the World’s Fair has suggested that it be in the form of a Columbus memorial. The new building will be known as “The Columbus.” and will be one of the most imposing structures in the city. Plans for the building have been made by W. W. Boyington & Co. They provide for a building after the Spanish style of architecture.

1In 1869, Eugene A. Roddin and James L. Hamilton entered into the jewelry business, Roddin furnishing by far the larger amounts. Roddin had the business experience and connection, and attended to the buying of goods, while Hamilton was merely a salesman. The business was prosperous up to the time of the Great Fire of 1871. During the first two years after the fire, the business of the firm was not prospering, mainly because Roddin’s time was being dominated by domestic difficulties of an extremely delicate issue (divorce). About the 1st day of January in 1874, the indebtedness of the firm was about $62,000, which they were utterly unable to pay in court. After a highly publicized trial, the court allowed Roddin to turn over the entire assets of the firm to the creditors and he was willing to proceed with the business himself. His ex-wife, meanwhile, tried to get some of the firm’s settlement money which was the company’s and not his, so she was denied. During the summer of 1877 he opened a new store at 151 State Street, leaving the retail business and focused on the manufacturing and wholesale parts of the trade. Mr. Roddin passed away on February 8, 1896. 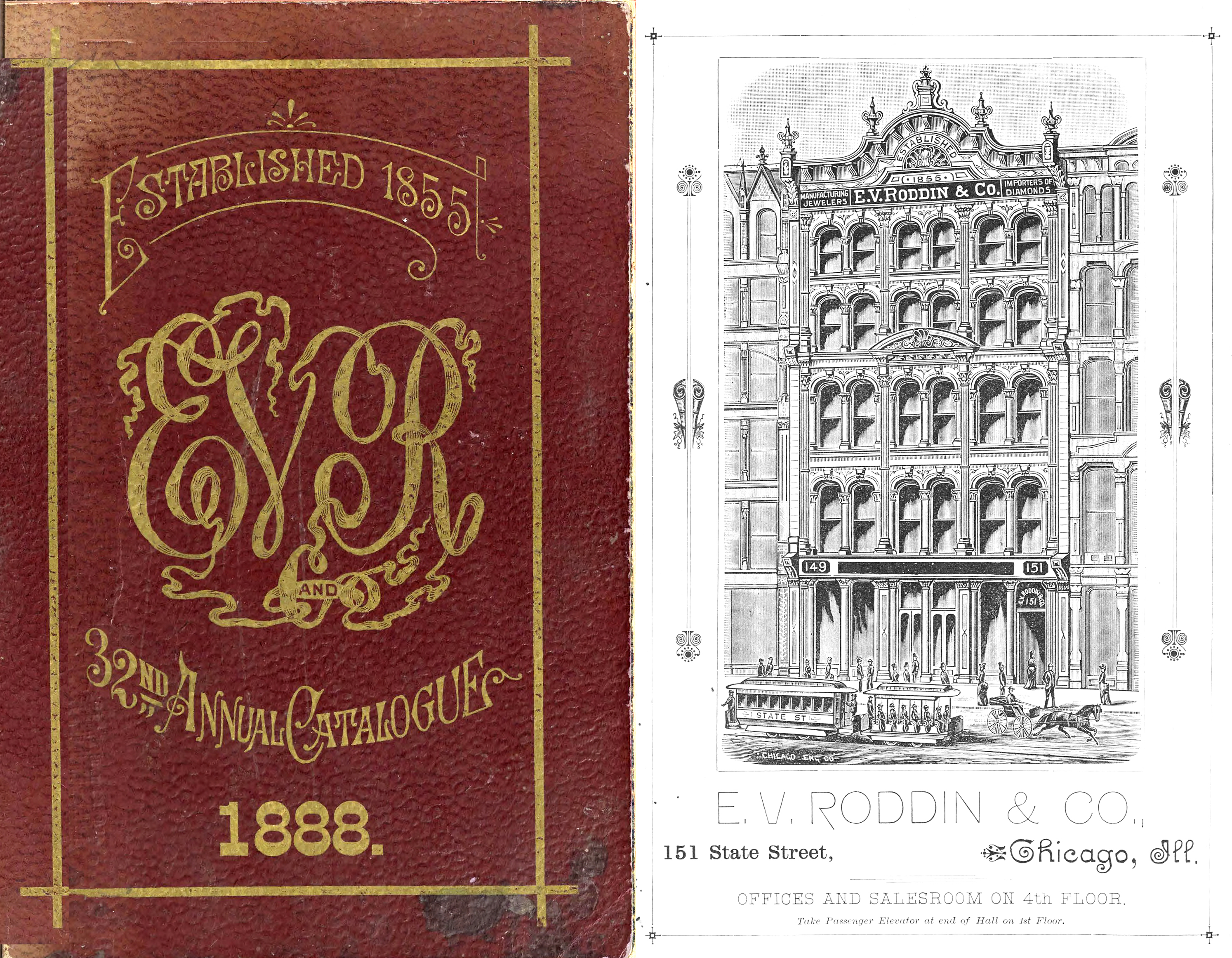