LA SALLE AND MADISON STREETS, where the Gallup & Hitchcock Building and Major Block are rivals, if not in design, at least in position. Both of the buildings are in the somewhat gloomy, but rich and handsome, Buena Vista stone, and are good types of the class of buildings which we have noticed above. The former is very elaborate, and the Chicagoan who remembers the building formerly occupying the site will scarcely regret the Old Chicago.

We have much pleasure, this month, in laying before our readers all over the world an illustration of the noble structure erected at the north-west corner of LaSalle and Madison streets by Messrs. Gallup & Hitchcock, two of our prominent citizens. This edifice is, without a question, the most thoroughly built of any in our new Chicago, while its architecture is classical and its general appearance grand and imposing in the extreme. Its dimensions are 53 feet 2 inches on LaSalle st., by 81 feet 2 inches on Madison. The architecture is the classic Renaissance, the material being Buena Vista sand stone, and plate glass, with Zinc and iron cresting.

At the top of the angle of the two fronts is constructed a weather vane, which shows “where sits the wind,” on a dial representing the points of the compass. The basement is divided into three elegant offices; the first, 16 by 49 feet, with vaults 5 by 9 feet; the middle one, 19 feet 6 inches by 36 feet, with vault 5 by 9 feet, and the corner office, 36 by 40 feet, with two vaults, each 6 by 9 feet. This latter office has an entrance from Madison street, one on the corner, and also one on La Salle street, while the other two have entrances from Madison street. The height of the basement is 10 feet 4 inches in the clear. 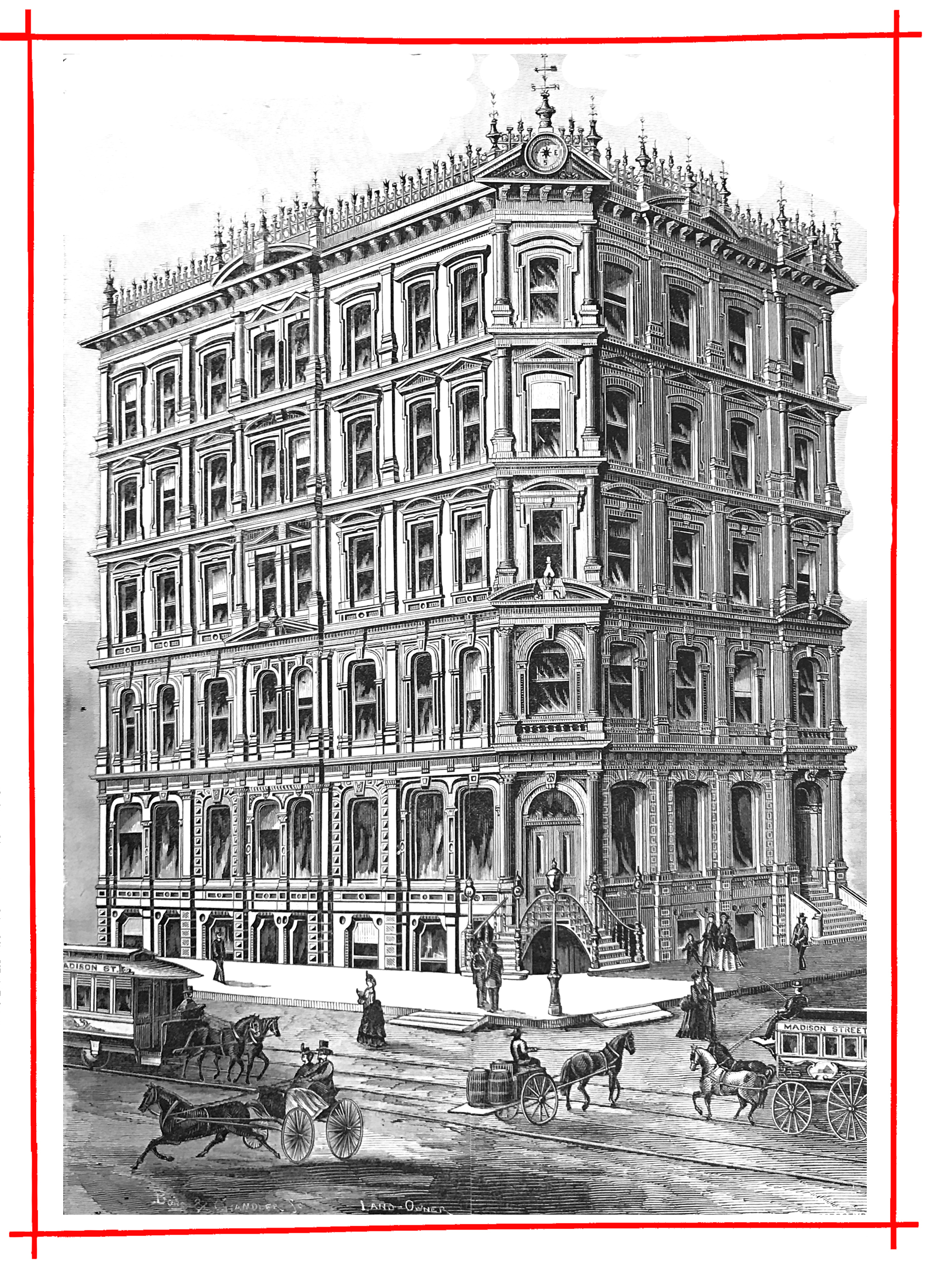 On the main floor is a magnificent banking room 36 feet by 60 feet 6 inches, with entrance on the corner, reached by two flights of iron stairs. This room has three vaults, one 5 by 9 feet and two 6 by 9 feet each. The exterior doors to the corner entrance are f wrought and cast iron of elaborate designs, being in pivots and swinging at the slightest touch.

West of the banking room, in connection with it and the main hall, is an office 16 by 49 feet, with vault 5 by 9 feet. These rooms are 15 feet 4 inches high in the clear. All the offices and halls of the basement and main floor have marble and slate tile floors, and the doors and all finish and wainscoting are of ash and black walnut of neat and tasty design. The main hall is 17 feet 6 inches by 32 feet, with a grand staircase of wrought and cast iron, with rail and ballusters of the same material. These stairs are 5 feet 6 inches wide from the bottom to the top of the building, with open well-hole 6 feet 6 inches by 20 feet, lighted by an immense sky-light 12 by 20 feet, the frame of which is the Hayes’ patent of wrought and galvanized iron. The elevator is is at the opposite end of the hall from the main entrance, and is the water-balance elevator system, with the interior of the car finished in different kinds of fancy hard woods, with carved and pilastered wainscoting four feet high, above which are carved pilasters in the angles of the car, the space between which is filled with plate-glass, there being mirrors on three sides of the car. Above these pilasters is a heavy carved bracket cornice, and above this is the ceiling which is covered with cut glass in panels which lights the car from the sky-light at the top of the shaft. The second floor is 14 feet 6 inches high in the clear, and is divided into five offices, one 12 by 16 feet, one 16 by 38 feet, with vault, one 24 by 38 feet, with vault, and one 11 by 20 feet 6 inches. The third and fourth floors have four offices each, one 16 by 38 feet, with vault, one 32 by 36 feet, with two vaults, one 24 by 38 feet, and one 11 by 20 feet 6 inches. The fifth floor is divided into four rooms, one 11 feet 8 inches by 6 feet 4 inches, one 16 feet 4 inches by 38 feet, with vault; one 32 feet long 6 inches by 60 feet 6 inches, with three vaults, and one 11 feet 6 inches by 19 feet 10 inches. The third story is 13 feet 4 inches in height, the fourth story 12 feet 4 inches, and the fifth story 15 feet high in the clear.

All the floors throughout the building are constructed of wrought-iron beams, with brick arches between, and leveled up with cement two inches above the iron beams. The roof is also constructed in the same manner, and covered with composition roofing cement and gravel. The floors of the second, third, fourth and fifth stories are covered with ash and cherry in alternate strips two and a half inches wide. There are mantels and grates in all the offices, except those on the fifth floor. The doors and finish of all stories above the main will be of first-class pine, with black walnut mouldings, finished with shellac and polished. There are speaking-tubes from the hall on the main floor, communicating with each office above. The entire building is heated by steam, the coils being located in recesses under the window-sills. The ceilings of all rooms, except on the fifth floor, are panels in stucco, with stucco cornices around the angles. The water closets, etc., are located in the basement, third and fourth stories, and are thoroughly ventilated. The halls are wainscoted with paneled ash and black walnut. The entire cost is about $200,000.

This building has been erected according to plans made by Dixon & Hamilton, architects, 133 LaSalle street, room 27, and under their immediate supervision. Among other buildings which this firm of architects have designed and supervised the erection of, may be named the Major Block, diagonally opposite this building, Anderson’s European Hotel, the Wadsworth Building, on Madison st., the building south-east corner of Madison and Market sts., occupied by M. D. Wells & Co., and the Odell Building, north-west corner Adams st. and Wabash ave. Illustrations of the two latter buildings have appeared in previous issues of The Land Owner. Among the most elegant and expensive residences of our city, designed by Messrs. Dixon & Hamilton, are those of Daniel Thompson, corner of Prairie avenue and Twentieth st.; N. S. Bouton and G. C. Bouton, on Indiana ave., between Sixteenth and Eighteenth sts. That of Mr. Thompson is, without doubt, the most elegant, imposing, and expensive dwelling west of New York.

The owners of this grand building, at once an ornament to our streets and a monument to its builders, are Mr. B. E. Gallup, of the well-known mortgage firm of Gallup & Peacock, and Mr. Chas. Hitchcock, of the reputable law firm of Hitchcock, Everts & Dupee. By their united efforts, these gentlemen have produced a building that every citizen of this great metropolis views with pride and points to with ever increasing pleasure.

The La Salle block, on the corner at Madison street, was remodeled about eight years ago and put into fairly good shape for modern usage, but even at that it is not large enough to make the returns that ought ti be made on the money invested in it, according to its market valuation. The grounds contain 52½x81 feet, and were valued at $527,000 by the tax commission. The building was figured in at $95,620, which makes the total $622,620. The property is owned by Mrs. Della S. Gallup and other heirs of the Gallup estate. A purchase of all three of the properties and the erection of anew building like the Stock Exchange building would represent an investment in the neighborhood of $2,000,000.1 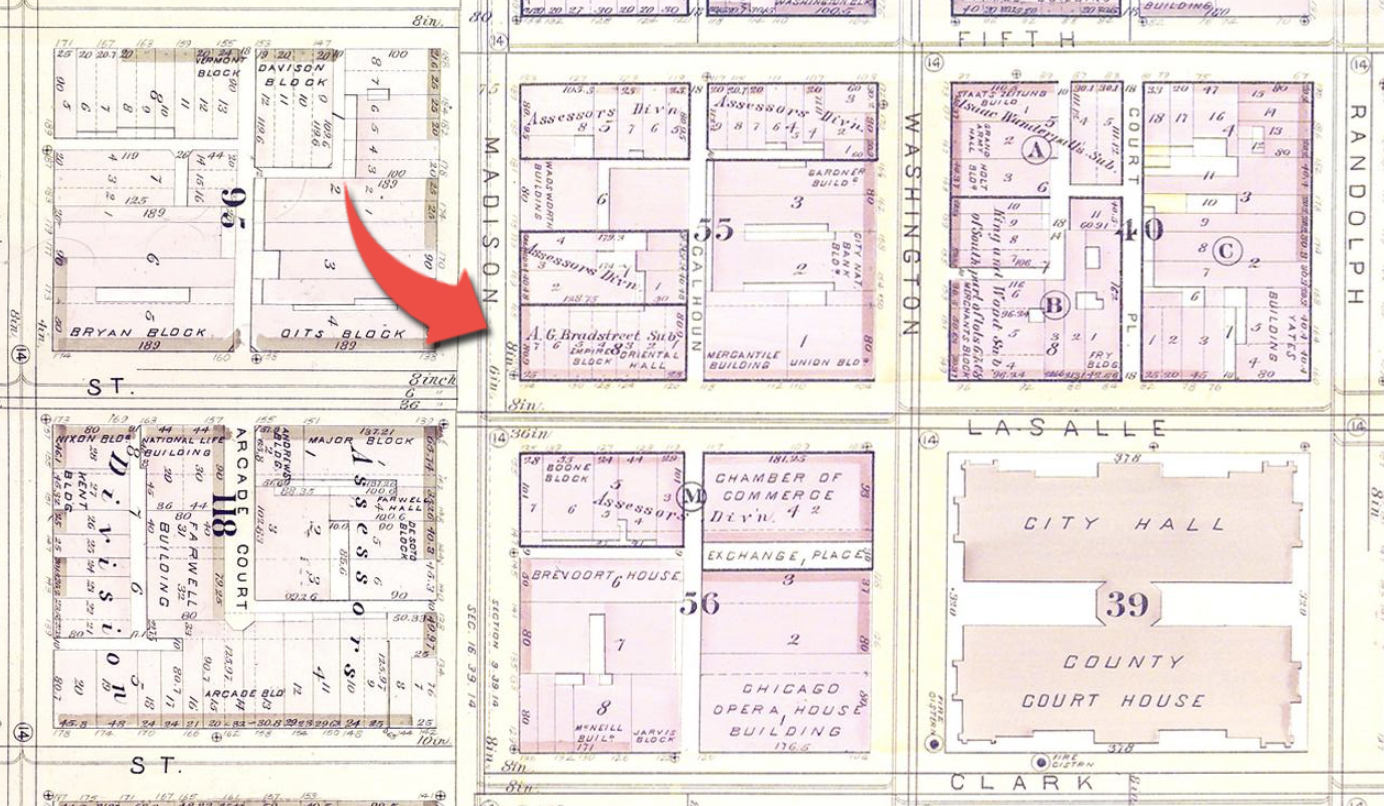 1 This building was never built. The La Salle Hotel occupied this site in 1908.