The roof of the Mason Block, on this street, is in its place, and the builing is exceedingly handsome in its appearance. 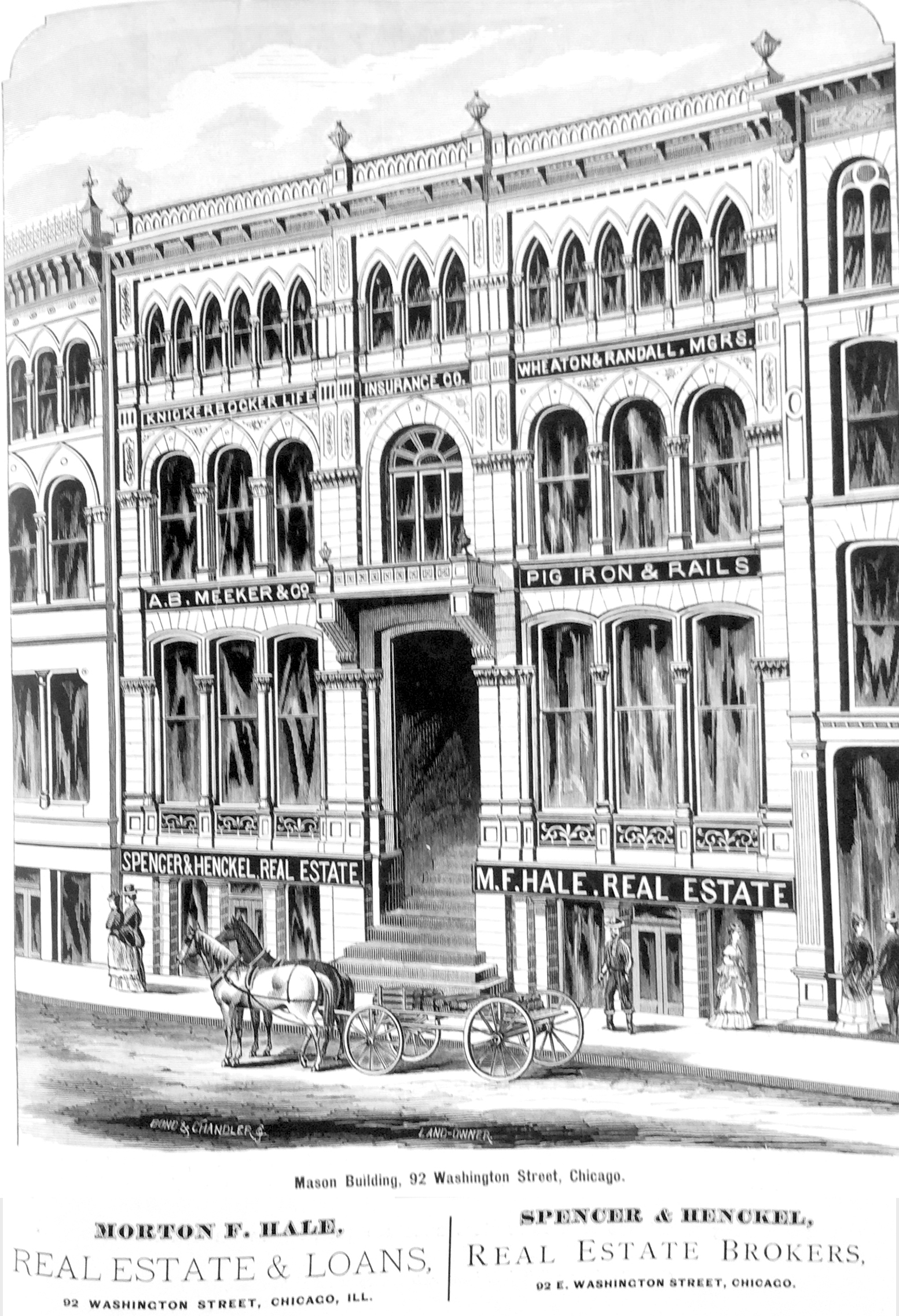 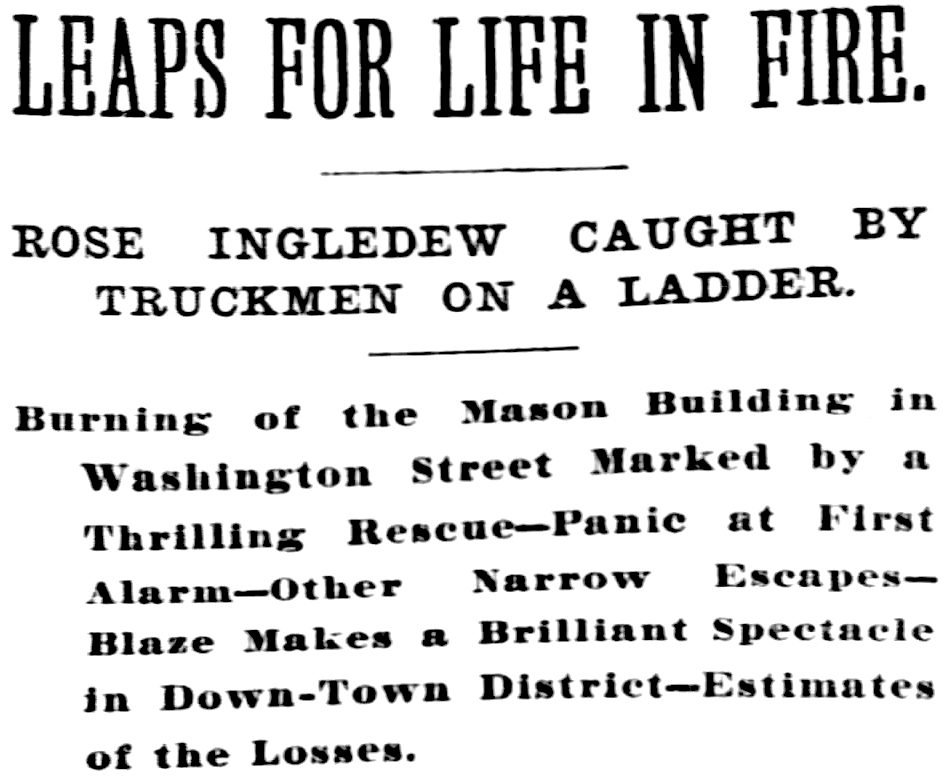 Through clouds of dense smoke a score of young women groped their way last night seeking escape from the Mason Building, 92-94-96 Washington street. All of them, but Miss Rose Ingledew, 4227 Fifth avenue, managed to reach the sidewalk from the fourth floor of the blazing building, and she was rescued from a window on the third floor by two daring firemen, while a big crowd cheered its approval of the brave act. Percy Kelley, who was on the same floor with Miss Ingledew, was saved by the same firemen, and Jacob Vos made a perilous descent to the street from the third floor by the aid of electric wires strung against the front of the building.

The fire made one of the most brilliant spectacles seen in the down-town district in years, and attracted a great crowd. Showers of sparks were carried high in the air, then swept eastward, making an arch of fire over the business center. Coming soon after 6 o’clock the fire quickly blockaded both the North and West Side car lines at a time when traffic waqs heaviest. Mny people were delayed for an hour in reaching home.

Many Law Libraries Burned.
The loss on the building was practically total and is estimated at $35,000. The value of the law libraries, furniture, machinery, and other property belonging to the tenants of the building which was destroyed will aggregate in the neighborhood of $75,000, according to the best estimates to be obtained last night. Part of the loss on the building is covered by insurance, while a number of the occupants are known to have carried full insurance.

The fire is supposed to have originated in the rear of the fourth floor, where F. J. Peterson’s printing office was located. The first intimation of the blaze which reached the pupils of the Gregg Shorthand College on the same floor was a dense volume of smoke which burst into the oom. A panic followed.

While the young women were struggling and screaming their instructor, Mr. Gregg, proceeded to break a window, climb along the window ledges, and make his way to the streets through the Title and Trust Building offices.1

Rescue of Miss Ingledew.
Captain Barker of truck 9 and Pipeman Egan of engine 13 were struggling up a ladder just as Miss Indledew appeared at the window. They both shouted at her, telling her to wait, and then, bracing themselves for the shock, held out their arms and called for her to jump. The distance from the ladder was nearly ten feet, but Miss Ingledew threw herself into the arms of Captain Barker. Percy Kelley was taken down the ladder as well.

Many other occupants of the building had narrow escapes. The elevator boy was the first to give a general alarm, the blaze being discovered by him as he was passing the fourth floor. Among the first to seek their safety were several men and women students in C. E. Jones’ business college on the third floor. The early arrival of Captain Smith of truck 2 and seven of his men carrying a lead of hose up the stairs was regarded as providential by the women, each gladly trusting herself to the escort of the firemen down the stairs.

Struggle with a Hose.
One of the exciting incidents of the fire which escaped the notice of the crowd was the escape of a siamesed nozzle from the firemen who were holding it. In attempting to change the direction of the stream the firemen slipped, and an instant later the hose was writhing about in Washington street like a huge snake. The force of the water threatened not only the lives of the firemen, but also the safety of three horses attached to a ladder truck, and a dozen men threw themselves on the hose, Chief Swenie among them. The horses were struck by the stream several times, and in their plunging threatened to jump into the basement. Before the nozzle was secured every fireman was drenched to the skin with icy water.

The old-fashioned construction of the building afforded the flames a chance for quick work. Scarcely ten minutes after the first alarm had been turned in a huge column of fire ascended the side of the Title and Trust Building, throwing out a shower of sparks and cinders that fell for blocks around. The elevator shaft in the center of the Mason Building became a chimney, and the fire ate its way quickly through the floors above and below.

Estimate of the Losses.
The losses to the tenants will fall principally on those occupying the three upper stories and half-basement being damaged more by water than by flames. As far as could be leaned the losses were estimated as follows: 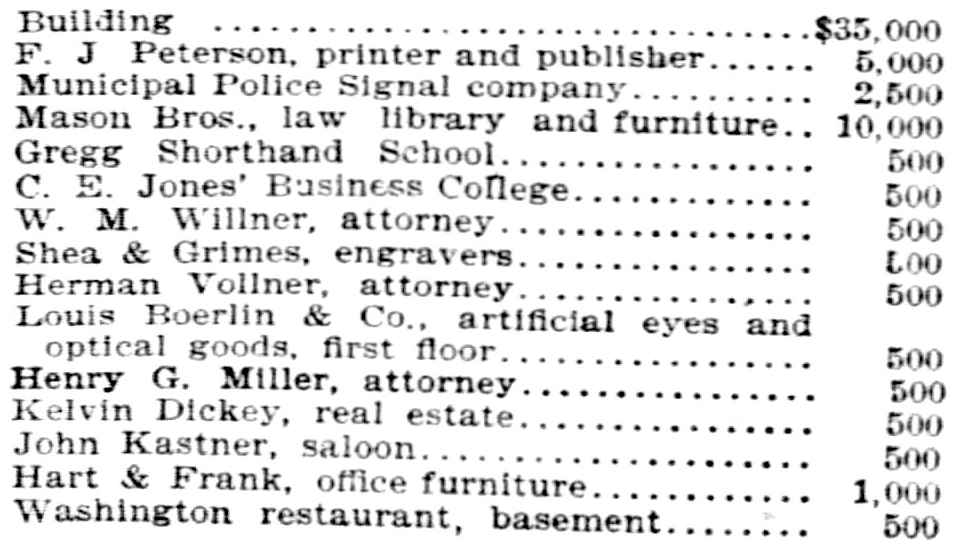 History of the Building.
The Mason Building was constructed more than twenty years ago and covered aq ground space at 92-96 Washington street, 71 by 182½. It consisted of five stories and a basement. The Swift commission valued the structure at $63,000, and it was insured for about $40,000. The property has been subjected to foreclosure proceedings, in which various transfers of title took place. During the latter part of 1899 David Campbell secured title to the west sixty feet frontage, and ion Jan. 2 he secured a loan of $320,000 on his interest in the realty and improvements from their Berkshire Life Insurance company, to run for eighteen months at 5 per cent.

In 1896 the Swift commission valued the ground at $450,000. The first 20¼ feet in Washington street, 140 feet east of Clark, then belonged to the estate of Roswell B. Mason, the following 30¾ feet to Henry G. Miller, and the remaining 20 feet to the Mason estate. Each of the holdings had a uniform depth of 182½ feet. After the failure of Mason Bros. the Chicago Title and Trust company became administrator of Edward G. Mason and trustee of the firm. to the judicial sale at the Real Estate board rooms on Nov. 24, 1899, of an undivided one-half of a three-sevenths interest in the property Mrs. Julia E. Mason, the widow of Edward G. Mason, bought in the holding for $100.

J. B. Galloway secured the passage of a resolution instructing the directors to consider ways and means for financing a scheme to erect a twelve-story real estate board building on the site of the burned Mason block in Washington street. 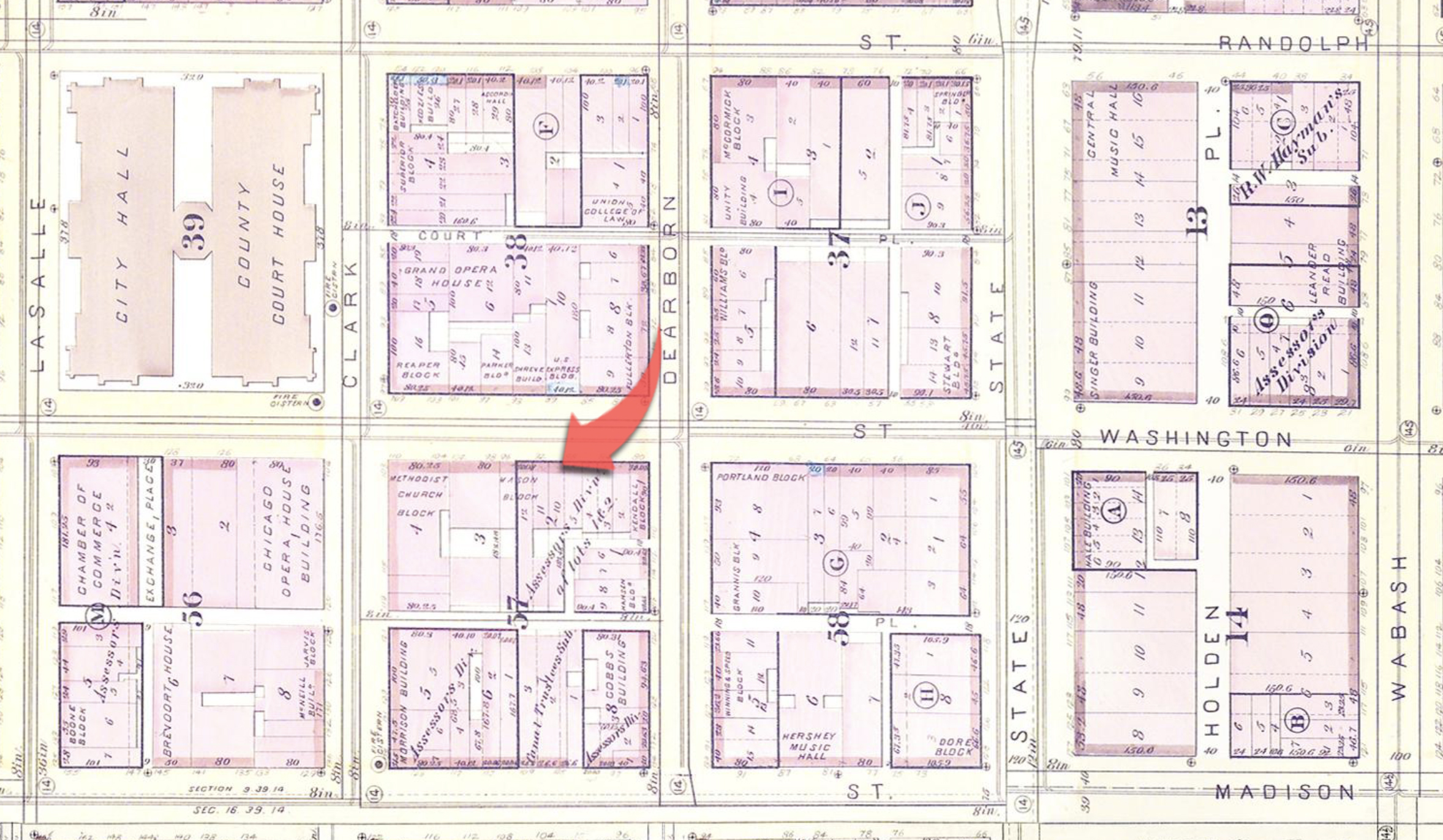 1 In 1893, John Robert Gregg emigrated to the United States. That year he published “Gregg Shorthand” with great success. Gregg settled in Chicago where he wrote many books for the Gregg Publishing Company on shorthand and business practices.