Few citizens of any great city know much about it. They go to Europe to see what they might find within an hour’s ride of their own houses. They grow enthusiastic over the picturesque Ghetto of Amsterdam, but are entirely ignorant of the greater Ghetto in the Seventh Ward of Chicago. Few Americans who have made the “grand tour” have seen as much of foreign life as may be found in Chicago. Within the city limits one may find the atmosphere and see the local customs of Palestine, Greece,. Servia, Croatia, Lithuania, Poland, Bohemia, Hungary, Russia, Italy, Arabia, and a dozen other equally interesting countries. The American abroad lives chiefly in hotels, which are essentially the same the world over. He gets practically no idea of the life of the people, which is the essence of the country and which the Chicagoan may study without leaving home.

Most people are even more ignorant of the fact that Chicago has a history. They look upon the city as a mushroom sprung up over night. On the contrary, it has a history stretching back for more than 200 years. For instance, the Drainage Canal, the last and greatest achievement of Chicago, was first suggested by Joliet, who foresaw what the country is just beginning to realize—that here was the proper location for a waterway connecting the great lakes and the gulf. Within sixty years of the first landing of the Pilgrim Fathers at Plymouth Rock the present site of Chicago had already been recognized and pointed out as the future gateway to the great West.

Since Chicago became a city and began its growth men have been too busy making history to set up monuments to mark its progress. But the town is full of historic sites and localities. Business-men pass them every day on the streets and are ignorant even of their existence. But every Chicagoan should feel it a duty as well as pleasure to become acquainted with at least a few of the more important. Such an acquaintance will lend a new interest to a walk about town or to a ride on the wheel. It will help him to realize that he is “a citizen of no mean city” from whatever standpoint it may be regarded.

The places of historic and of present interest are scattered all over Chicago. Because they are unmarked they are most often overlooked and neglected. An intelligent man, for instance, might pass up and down Lincoln Park boulevard for a lifetime without having his attention called to the historic Waubansee stone, which was carved by a soldier in Fort Dearborn prior to 1832, and which now stands in plain sight in the private yard at No. 100 between Erie and Huron streets. While this stone was still lying in the plaza of old Fort Dearborn it was used as a platform by Daniel Webster, when, in 1837, he was lifted up to the top of it to deliver a speech in which he phophesied the future greatness of the frontier village.

Because old Fort Dearborn was located in what is now the First Ward, and because it contains the business center of the city, there are more points of the historical and present interest within its limits than in any other ward. The value of the property in the First Ward makes it easily the richest ward in the city and one of the richest in the world. At the same time its resident population is largely made up of the poorer classes. The men who own the property live outside the down-town district, while a large part of the vote which controls the politics of the ward comes from the lodging-houses and dives of South Clark street. 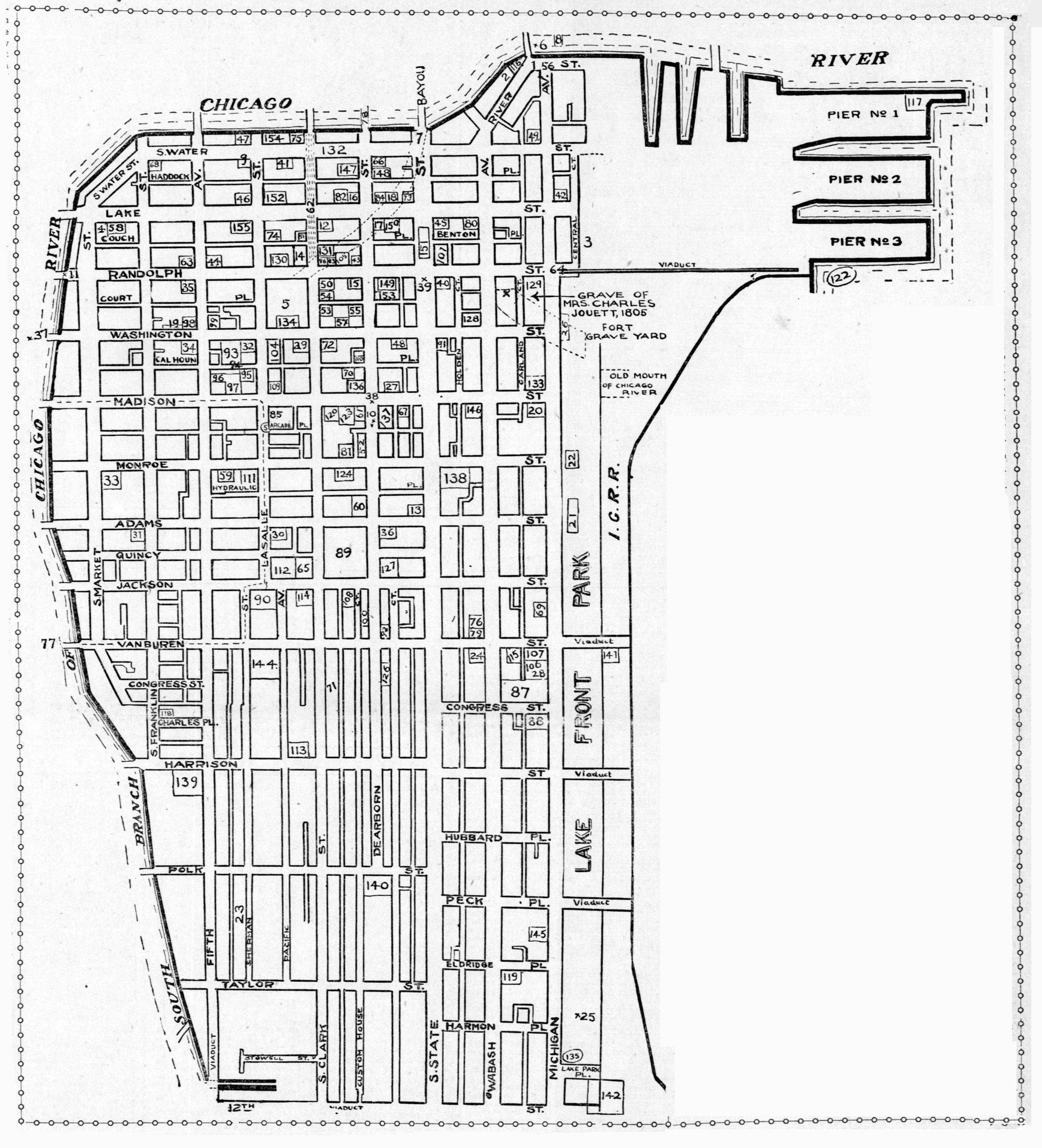 The First Ward is emphatically the ward of contrasts. It contains the most magnificent buildings and some of the filthiest hovels in the city. It is the temporary home of the foreign Prince who visits Chicago and of the wandering hobo who comes to town to spend the winter in a five-cent lodging and barrel house. The Y. M. C. A. and many of the other great religious and charitable organizations have their headquarters in the First Ward. It is also the location of the Harrison Street Police Station, where it is said more arrests are made than in any other police police district in the world. It contains the great banks and other financial institutions of La Salle street, and the crap games, policy shops, and panel games of lower State street and the whole levee district. It contains fewer homes and more saloons than any other ward in the city.

Although neither the first temporary nor first permanent residence on the present site of Chicago was built in what is now the First Ward the fact that Fort Dearborn was located at the foot of the present River street gave it from the first a commanding position as the center of the business life of the town. The tablet which marks the site of the fort is familiar to everybody who has crossed the Rush street bridge. Not far away, as shown on the map, is the site of the old fort cemetery. Here was buried the first white person to die in Chicago of whose death a record exists. Mrs. Charles Jouett, wife of the first Indian Agent, was buried in its first grave in 1805. The exact spot, long since forgotten, was in old Dearborn Park, where the new Public Library Building stands. The ashes of this pioneer house-wife have since been scattered by the diggers who made the foundation excavation for the library.

At the foot of what is now Madison street was the old mouth of the Chicago River. In the old days the stream after passing by the fort turned abruptly to the south, its egress to the east being blocked by a sandbar, which was cut through in the ’30s, thus allowing vessels of goodly draft to enter the harbor. Opening into the river at what is now the head of State street a bayou stretched away to the southwest at the present corner of Clark and Randolph streets.

Where the big business=house now stands at the southeast corner of Lake and Market streets, the first tavern Chicago ever saw was opened by Mark Beaubien in 1826. It was a log cabin, but in a few years it was supplemented by a two-story frame building, and then Chicago had a hotel. It was the center of the social and political life of the village. It was named for the most prominent citizen of the vilage, Billy Caldwell, who was half Irish and half Pottawatomie and known as “The Sauganash.” In the Sauganash Hotel the first religious services held in the village took place in 1833—not taking into account the religious services held by Father Marquette in 1673. The first theatrical performance was given there in 1837, and when the old hotel fell into decay on its site was erected the wigwam in which the convention was eld that nominated Abraham Libcoln for President in 1860.

With the increase of Chicago’s commerce South Water street became the first business thoroughfare. Theb first frame building was built at the corner of South Water and La Salle in 1832. This marked an epoch in Chicago’s commercial progress that was hardly equaled when twenty years later a store building with an iron front was erected in the same street. The first newspaper office, the first bank, and the first book store were located in South Water street, which is now devoted exclusively to fruit and produce establishments, and the busiest market f the sort in the world.

The progress of the city may be noted by studying the map of the First Ward. It was southward, and with the coming of the ’50s Lake street became the principal business street, with the Dearborn street intersection as the center of activities, as Dearborn street had the only bridge across the main river. The Rialto auction-house at 8 and 10 Dearborn street was the rendezvous of the town wits and political gossipers.

In 1837 the first theatrical venture was transferred from the Sauganash to the Rialto, and on the opening night Joseph Jefferson, as a boy, appeared on the bill. The first Tremont House, erected 1n 1833, on the northwest corner of Lake and Dearborn, diagonally opposite its present location, was built of logs, but it helped the growing importance of Lake street. The Mansion House in Lake street, two doors east of Dearborn, was the place in which the first public entertainment, in a dramatic reading, was given in Chicago. The first of the long and distinguished line of Chicago divorce trials took place in the parlor of the old Mansion House when it was used as a court-room in 1834. 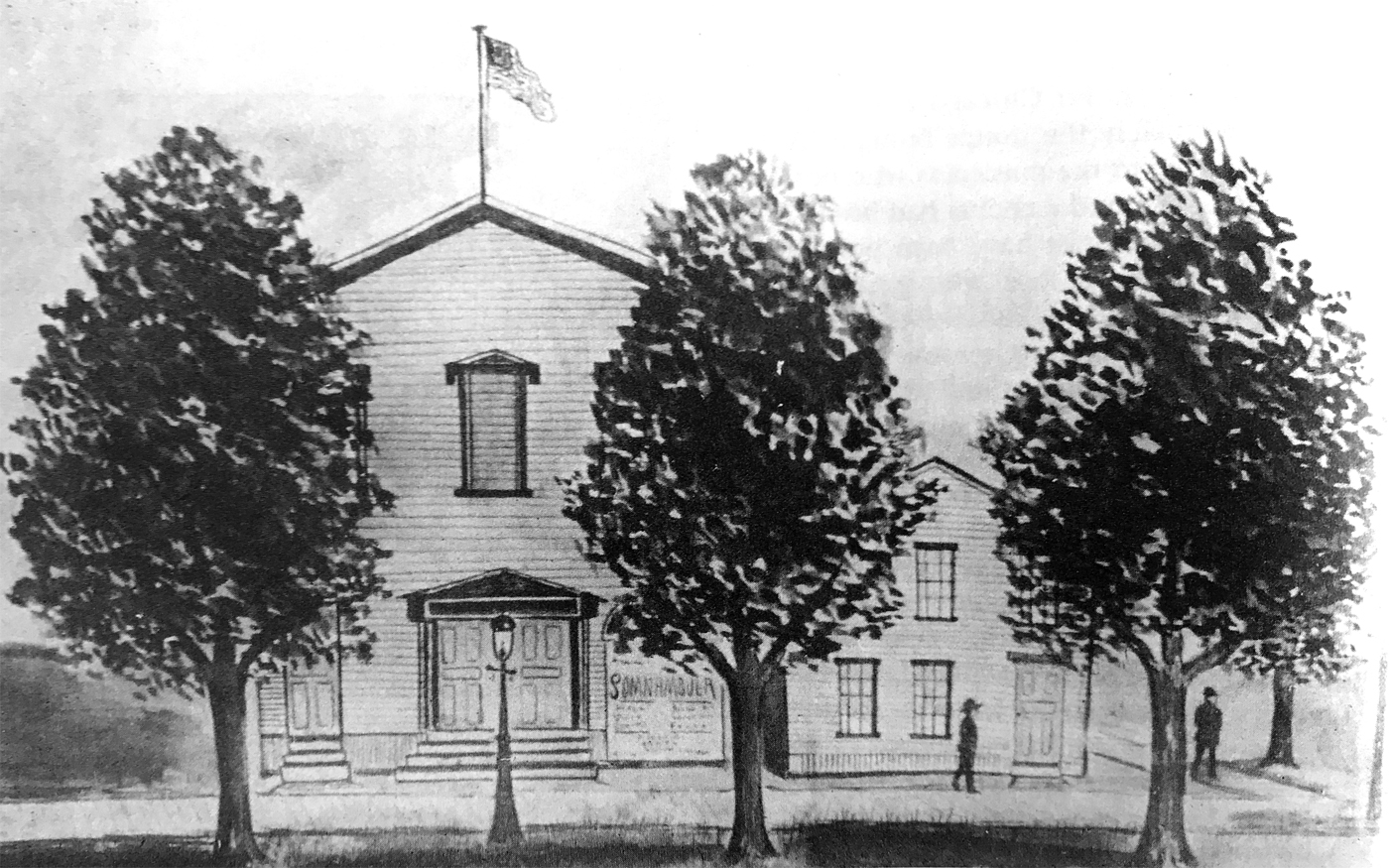 Chicago’s first regular theater building was erected in Lake street to house Rice’s Theater. It was a famous playhouse in its day. Edwin Forrest, Junius Brutus Booth, T. D. Rice, Barney Williams, James H. McVicker, and other great actors of the day appeared in it. The first opera ever produced in Chicago was being performed in Rice’s Theater in 1850 when it was destroyed by fire.

One block farther west, on the southeast corner of Clark and Lake, was erected the Saloon Building which was famous for years. It contained a hall which was exultingly described as “the finest hall west of Buffalo.” This hall was so fine it was called a “salon,” which was Anglicized into “saloon.” The first public concert Chicago ever heard was produced in the Salon. The first panorama was shown there and Stephen A. Douglas made his first speech to a Chicago audience in it. It was the cradle of the Swedenborgian and Unitarian Churches of Chicago, and the mass-meeting to obtain a city charter was held there, and when the first telegraph message was sent to Chicago it was received in the Salon.

The march of the growing city turned again and went eastward. The public market was built in the middle of State street, between Lake and Randolph, in 1840, and then State street got a bridge.

Thenceforth State street prospered. The fine hotels of this period were to the east of it, and with the business district of the First Ward to the west, State street became the center. While the first bus line ran in Dearborn street, starting at the present Tribune corner, the first street car track was laid in State street in 1859, and the supremacy of that thoroughfare was established.

The center of business since 1832 has been in what is now the First Ward. It has a large share of the “first” things of historic interest. It contains the site of the first tavern, first hotel, first restaurant, first frame store, first newspaper, first street car, first bank, first theater, first public school, first convent, asylum, hospital, church, and cathedral. The architectural progress of the Western world may be traced in the history of this ward. It is marked by steps from the log cabin to the frame building, the brick and stone structures to the climax in the shape of the skyscraper of steel.
‘
The history of the First Ward is scarcely less interesting than its existing greatness. A study of the accompanying map guide will demonstrate this. The places of interests have been marked so that they may be readily located. 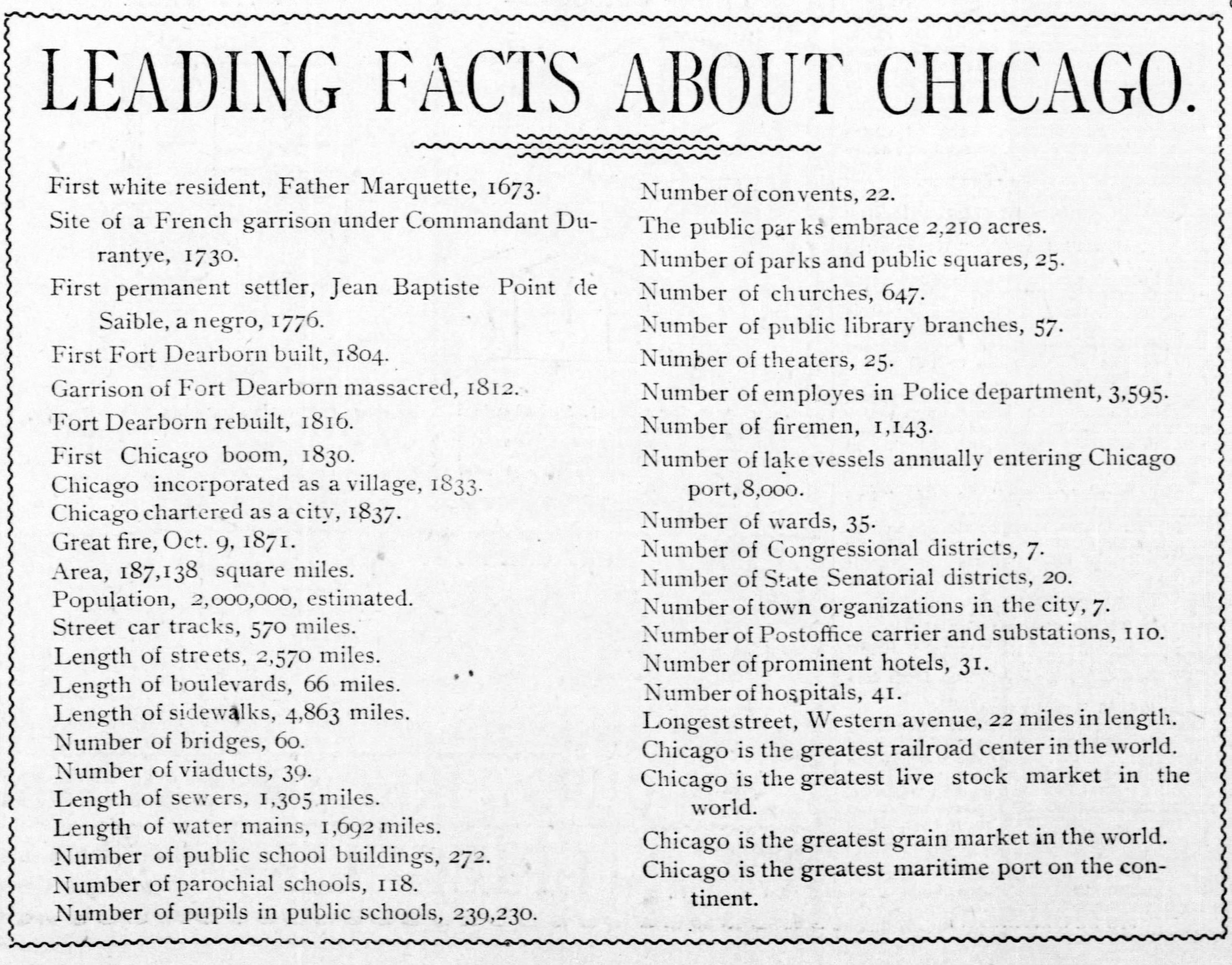