Before referring to those early corporate homes, styled by courtesy “City halls ” in former days, a description of a noted edifice is given, because it was used as the first city hall. The structure stood on the southeast corner of Lake and Clark streets, and was erected in 1836 by Captain J. B. F. Russell and G. W. Doan. At that time it was not only the finest hall in Chicago, but was not eclipsed by anything of the kind in the West. In this hall on Monday evening, January 23, 1837, the meeting of a few of the leading citizens of the town was held, for the purpose of preliminary action in procuring a city charter. It was also devoted to public entertainments of various kinds, political and religious meetings, concerts, traveling shows,etc. The name of this hall would to the casual reader, appear to connect it with a house of no very good repute; but such an impression would he erroneous. The word ”saloon” as applied to this edifice had a very different meaning from what it now has. Its use was synonymous with the French salon, which means literally a grand and spacious hall.

Hon. John Wentworth says, in his reminiscences, that when first completed it was the largest and most beautiful hall west of Buffalo. “Here it was,” says Mr. Wentworth, “that Stephen A. Douglas made his first speech in Chicago. It was in this hall that the first joint polit- ical discussion was ever had in northern Illinois, in 1838, between Mr. Douglas and his competitor for Con- gress, John T. Stuart.” It was at this meeting that one of the citizens, in a speech, became so enthusiastic over the future which, with prophetic vision, he saw in store for the young and growing city, that he made the startling prediction that the child was already born who would live to see Chicago with a population of fifty thousand souls. At once the speaker was greeted with sarcastic, yet good-natured, calls of “Town Lots;” an implication that the orator was interested in Chicago real estate. 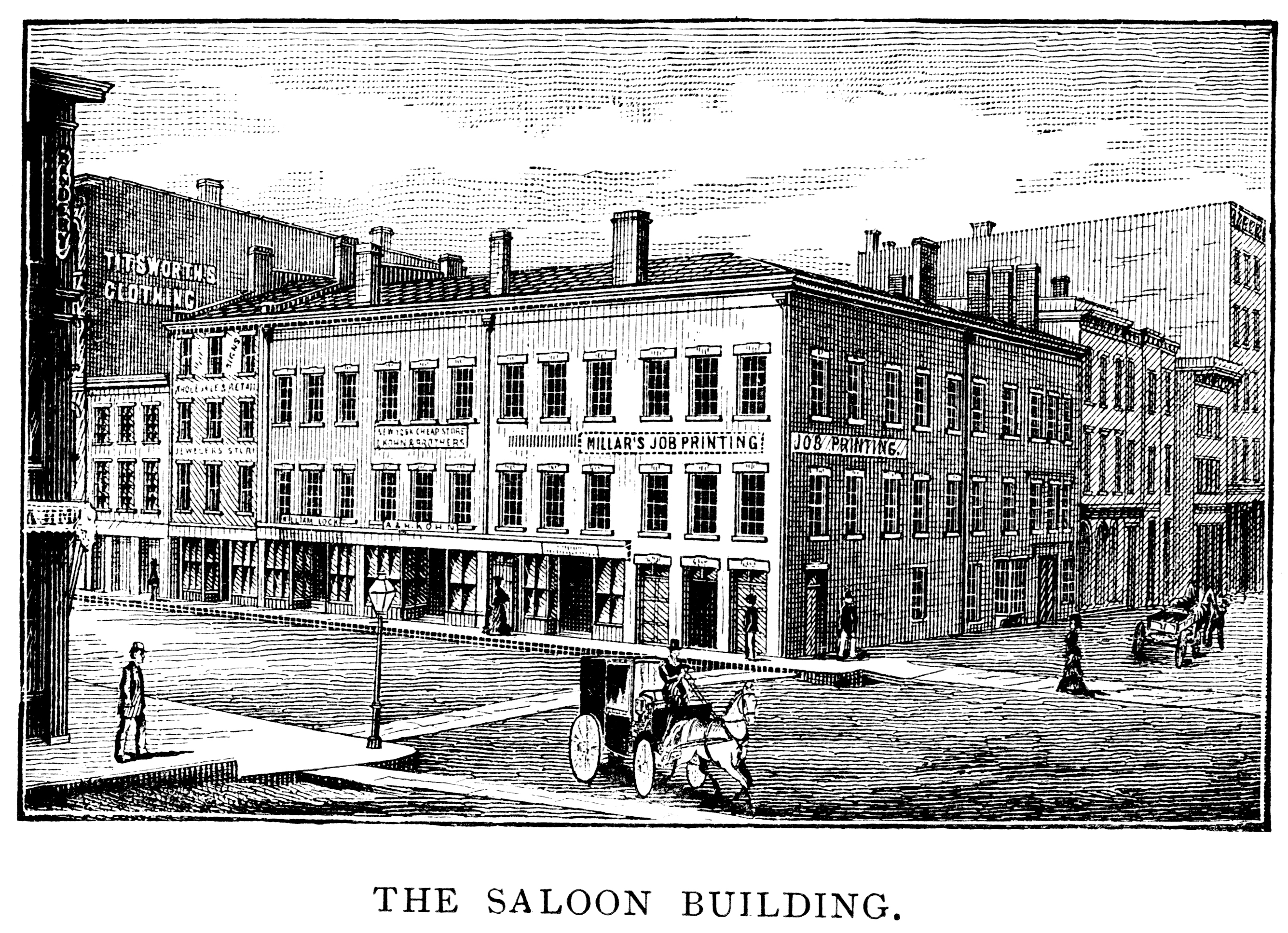 City Hall.—In May, 1837, the Common Council leased a room in the Saloon Building, for their own use and for the accommodation of the Municipal Court. At the expiration of their five years’ lease the city fathers moved to Mrs. Nancy Chapman’s building, opposite the jail, corner of LaSalle and Randolph streets. The public square at this time, 1842, was fenceless, and presented such a dilapidated and barren appearance that citizens were urged to improve the park by individual exertion. In April a number of citizens did turn out with shovels, mattocks, etc., and planted a few trees and built a fence. Henry Brown directed the work. But the public ardor seems to have cooled, although not for a time, the Democrat, in May, noticing that “the fence around the public square, on Clark Street, stands like a good many politicians we wot of—but half whitewashed.” J. Young Scammon and William H. Harris did much, about this time, to improve the appearance of the square.

In January, 1848, the Market Building on State Street was erected by the city, and was the first municipal structure, the Common Council having heretofore rented their accommodations. The building was situated in the center of State Street, fronting forty feet on Randolph and running north toward Lake Street one hundred and eighty feet. It was built of brick and stone, two stories in height. The first floor was laid out into thirty-two stalls. The second story was divided into four rooms, the one in the north end twenty by forty feet, arranged for a library, and the south room for the City Clerk’s office. The center rooms, divided by a partition, with folding doors, one forty by seventy- two feet, the other forty by sixty-eight feet, were used by the Common Council and for other public purposes. The entire cost was $11,070. J. M. Van Osdel was the architect and superintendent. The Common Council occupied their new rooms for the first time November 13, 1848. 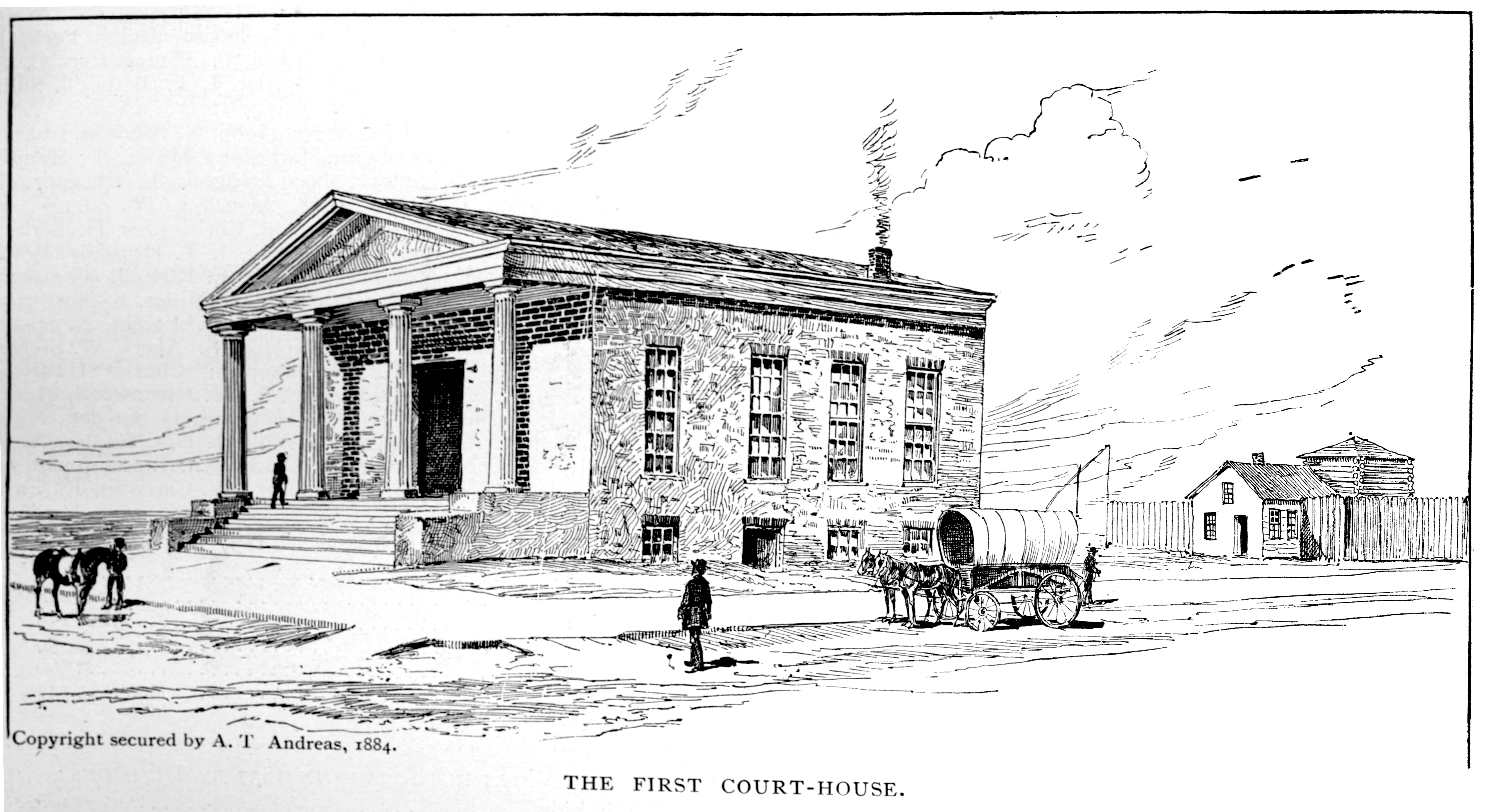 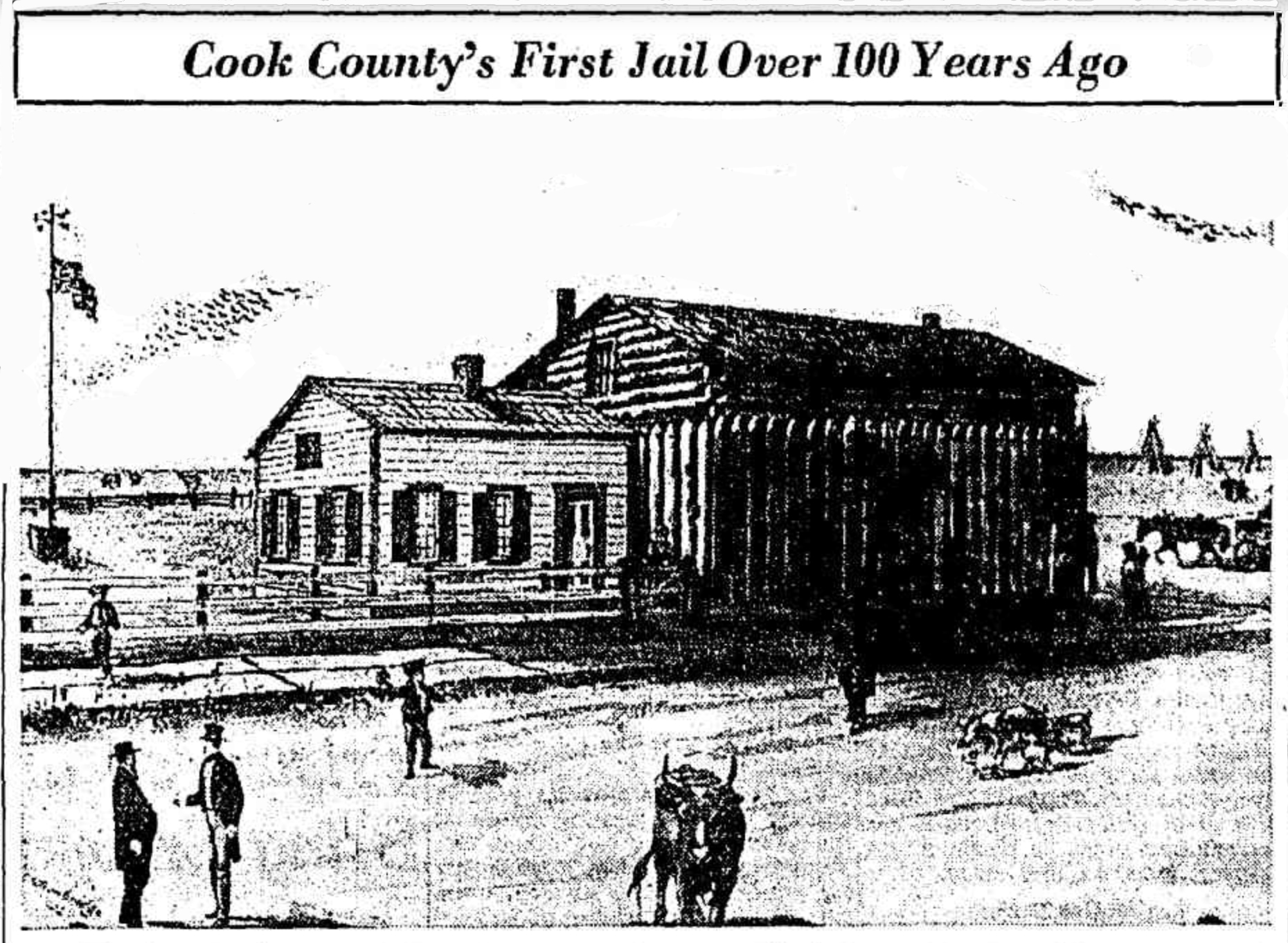 The first Cook County jail as it appeared in 1836. The jail stood in the public square at the southeast corner of Randolph and LaSalle streets.