BUILDING ENTERPRISES.—We hear of numerous new building enterprises all about the city. Bryan’s new Music Hall is to be rebuilt, and a new marble front structure, five stories high, is to be erected in front of it on Clark street, through which an entrance of a broad and striking character is to be opened upon the Hall structure, and its several rooms. Both these are to be built by Mr. Bryan during the coming season.

BRYAN’S NEW MUSIC HLL.—This new structure is being pushed toward rapidly. The vestibule and rooms in the entrance building have received the first coat of plaster. In the main audience room the gallery is nearly up, the floor partially laid and the walls being prepared for plasterers. It will be finished the first of August.

A GOOD IDEA.—Bryan’s new Music Hall will be seated below with comfortable arm chairs. No more gouging of seats, and usurpations of crinolinity on crowded occasions. Thank you, Mr. Bryan.

Bryan Hall.
We looked at Bryan Hall yesterday, now rapidly approaching completion. The painters have followed the carpenters, and now the upholsterers are busy. On the occasion of throwing open this splendid public audience room to its destined uses, we shall take the opportunity to refer to its merits more in detail, but as it stands we may now say in brief that we have never elsewhere seen a Hall of its class for which we would be willing to exchange this, as regards its fitness and excellence in all points of access, spaciousness, general arrangement, lighting, ventilation, and as they must undoubtedly prove, its acoustic qualities. 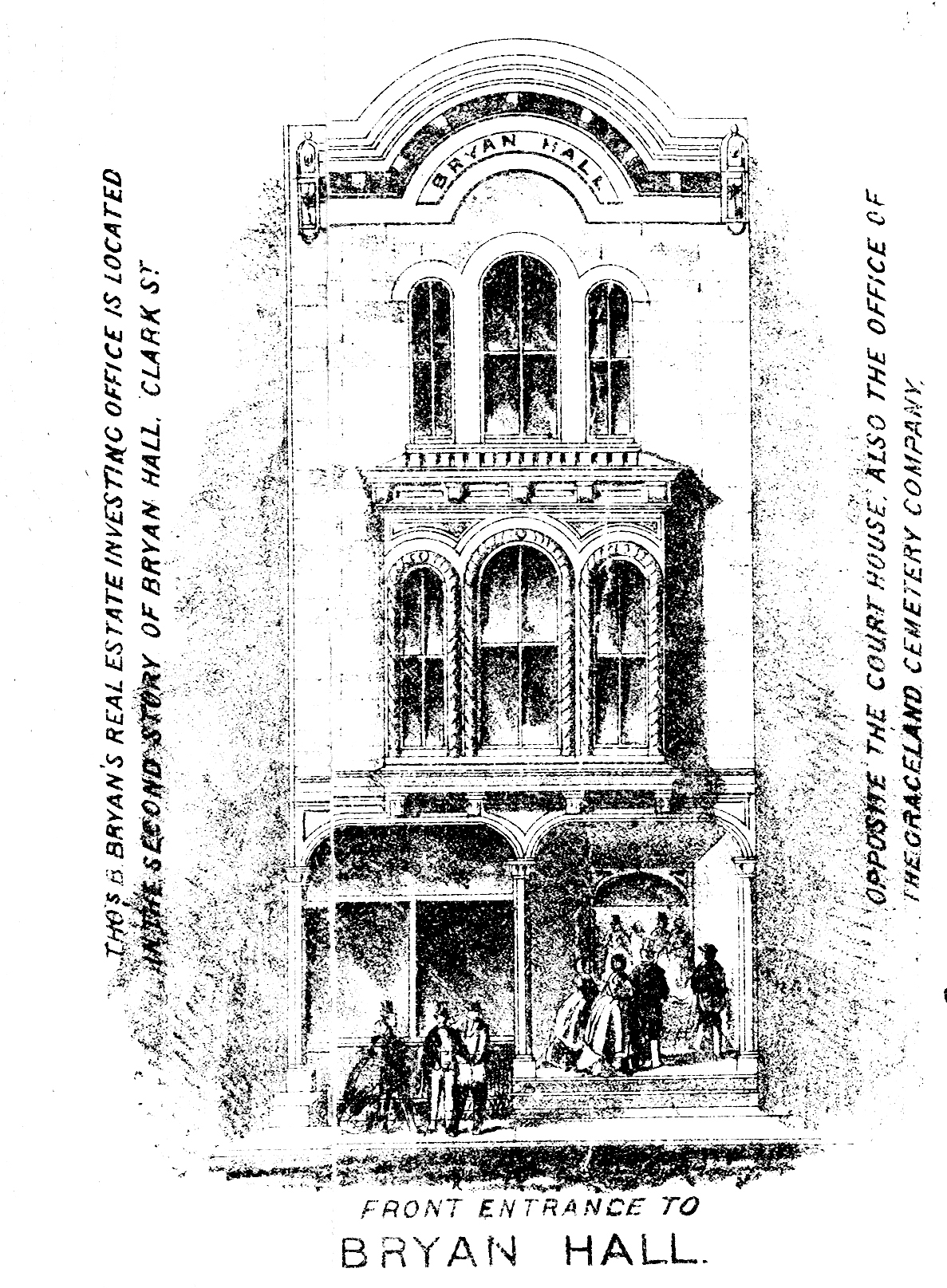 This is high praise, yet we can honestly accord no less, for our opinion is strengthened by that of those in whose opinions, did we distrust our own, every confidence should be placed. Certainly Mr. Bryan has spared neither expense nor pains in personal supervision or comparison with other halls of its class, to secure a most perfect and complete Hall and Concert Room, and he has done so. It is not thrust into an “upper chamber” at the head of dangerous flights of stairs and through narrow and cramped vestibules, such as too often characterize public halls, but Bryan Hall opens on the street with a broad door raised but half a flight of steps from the sidewalk. In addition are means of egress in wide doors on the alley which can be thrown open and the Hall cleared through the same without using the front entrance at all. But these latter, of course, only for rare emergencies, or the very few occasions for such necessity.

As to the size of Bryan Hall, the question has so often been referred to, that we have taken pains to procure from Messrs. Carter & Bauer the accurate measurements for comparison of the new audience room with Metropolitan Hall. The actual figures are as follows:

By this greater area, together with the consequent larger capacity of the galleries, Bryan Hall will give from 500 to 600 more sittings than any other in the city, since the Metropolitan is its largest competitor.

The ventilation of the Hall is most complete. The means of lighting are novel and beautiful, the gas burners being in a circle under the dome and concealed by a screen of ground glass from which their light comes softened and blended, without glare or annoyance to the eye. Other advantages are gained by the same, to which we shall again refer.

In the plan of the building, the main floor being raised a half flight, gives a lofty lower apartment of the same area as the Hall. This it was designed should be leased as a restaurant, but by a change of his plan, Mr. Bryan has now decided to hold this lower hall on lease for such numerous uses as may demand a cheaper hall, of ready access, and suitable appointments. During the year many such calls by those who wish accommodations for lectures, and various assemblies of the less prominent class, for all of which this lower hall will prove an acquisition. It is a very desirable feature as changed from the former plan, and a single season will so declare it.

As it stands, or is soon to stand, Bryan Hall will be at once an honor to our city and a credit to its enterprising and liberal proprietor. The wall at the back of the stage is to be hung with the Healy National Gallery of Paintings, comprising the leading Statesmen and Presidents from Washington down to J. B. and the two large historical pieces “Webster’s Reply to Haynes,” and “Franklin at the Court of France.” an art attraction of which any American city might well be proud, and the crowning ornament of Bryan Hall. 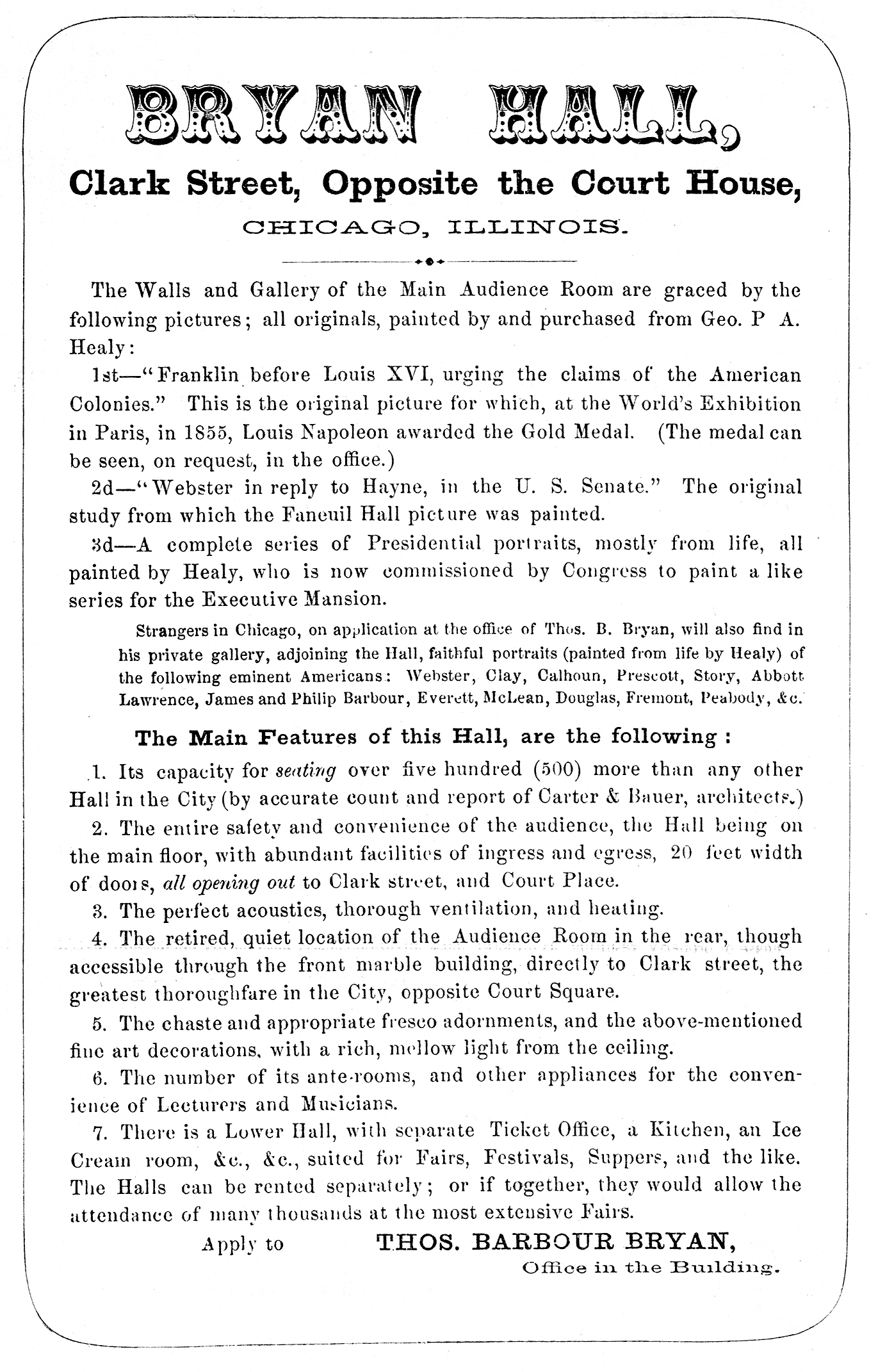 SALE OF “BRYAN HALL.”
It was recently mentioned that Mr. Hooley, who is already the proprietor of an opera house in Brooklyn, had leased Bryan Hall, in this city, for the purpose of turning it into an opera house also; but we are informed that, instead of being leased, it was sold to Mr. Hooley for $170,000. The property has 40 feet front on Clark street, running back 80 feet to a piece of ground 80 feet square., on which the hall is built. The location and dimensions of the property are well adapted to the purposes of an opera house, for which it is to be used.

HOOLEY’S OPERA HOUSE.
Mr. Hooley, who recently purchased the Bryan Hall property, is now in the city, and has already made his plans and specifications for converting the building into an opera house. Workmen will commence immediately, remodeling the entire interior, the effect of which, as well as the exterior, will be something heretofore unknown in Chicago. It is intended to have the work done by the holidays, and the house in operation.

HOOLEY’S OPERA HOUSE.
Old Bryan Hall, which years ago witnessed to many pleasant musical entertainments, where Frezzolini, Laborde, Lagrange, Cordier, and Colson once sung, where the Philharmonic concerts were born, and where they lived and died, where Mrs. Mozart, and Mrs. Bostwick, and Casgle Metterson, and James Lombard, and De Passes used to sing—old Bryan Hall, after undergoing metamorphosis into a carpet store, once more dons a new suit, this time of theatrical raiment, and is introduced to the public as Hooley’s Opera House. We need not to say who Mr. Hooley is. He is financially, the most successful man ever engaged in the minstrel business, and by the of bones and tambourine, has played his way into a handsome fortune. His little Opera House is a perfect bijou of a place, fitted up with remarkably good taste, and excellently well adapted to minstrel uses. We have already published a detailed description of the auditorium and hardly need add anything anything more concerning it. The decorations are not yet entirely finished, but even now make the interior very brilliant. The exterior is very handsomely illuminated with reflectors of colored glass, which can be seen for a great distance. The entrance to the auditorium is very wide and spacious, and lit by glass chandeliers. In the interior the light is furnished mainly from a massive and elegant chandelier, which, notwithstanding its numerous drops and pendants, gives a very soft, pleasant light. The proscenium boxes are models of taste and beauty, both in decoration and general finish; indeed, there is not a place of amusement in the city which has such elegant and spacious boxes. The stage is not very deep, but it has good width, and is thoroughly appointed, not only for the minstrel, but also for dramatic business. The scenery, by Mr. Halley, is very neatly painted, especially the drop curtain, which represents a piece of Italian scenery, set in Halley’s favorite oval, and draped around with curtain-work. The chairs for the auditorium have not yet been put in place, but have commenced to arrive, and will soon be set up. They are the Grand Opera House chairs, with medallion backs, upholstered with velvet plush. In all respects the new Opera House is very neat and elegant, and, both for hearing and seeing, has been planned with good judgement. It can hardly be said that there is a poor seat in the building.

The audience was, of course, simply enormous. Every inch of sitting and standing room was occupied, and a great many were obliged to go away without getting admission. Considering the fact that the Dearborn Theatre also was filled to overflowing, the assertion is pretty well verified that Chicago is able to support two first-class minstrel companies.

Hooley’s Loss.
R. M. Hooley, the owner of the late Clark Street Opera House, meets with a total loss. He had just retired from business and was about to go East to live, having rented his Opera House for five years at $21,000 per year. He has nothing left now but the ground, for which he has already had liberal offers. He has declined them, however, preferring to hold on and build again. 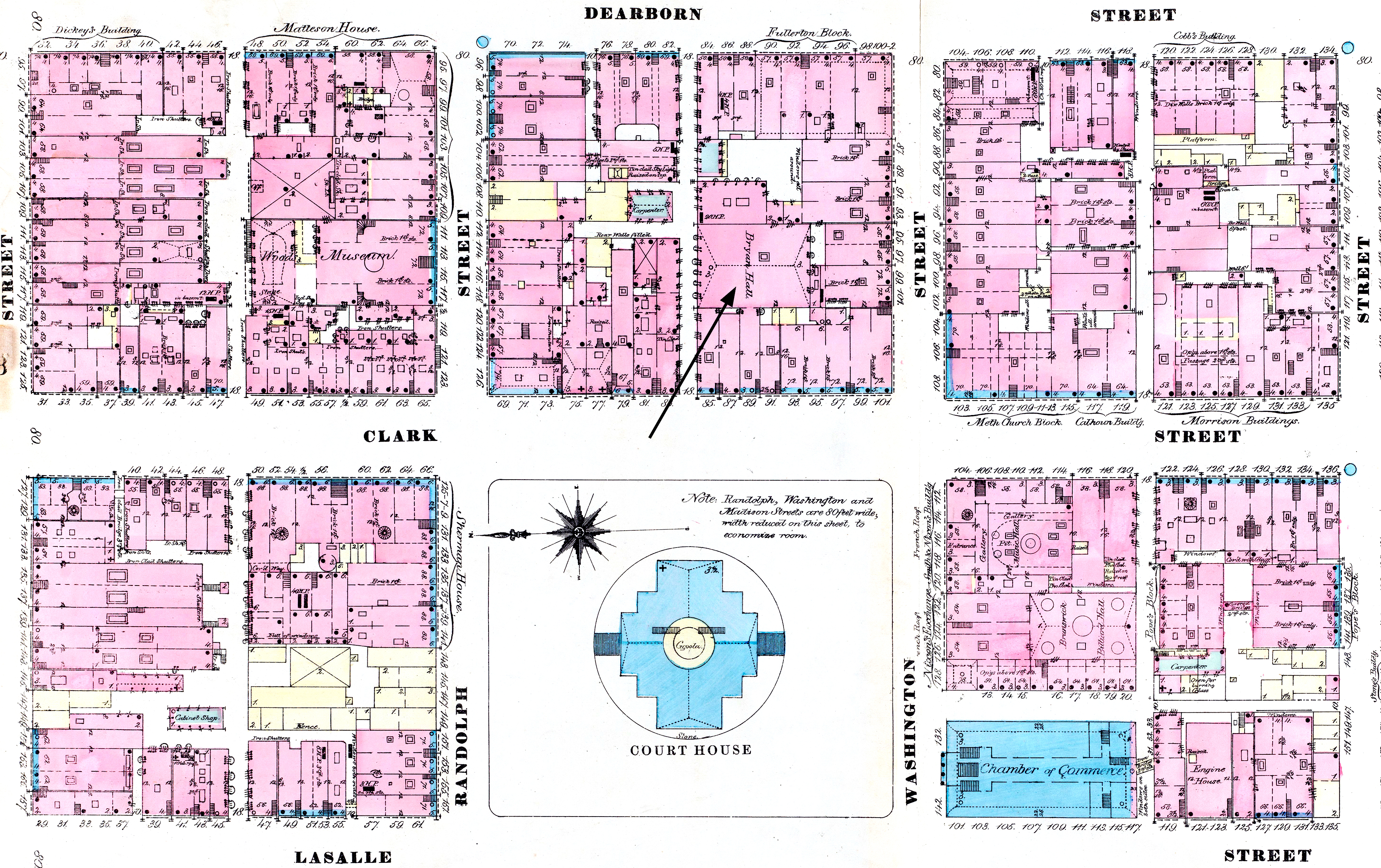