The history of the Nineteenth Ward is forever shadowed by the greatest calamity Chicago ever knew, for it was in this ward the great fire had its origin. There are many interesting spots in the Nineteenth Ward, and the history of the ward has some “first things” to boast, but the account of the fire dwarfs all of these. The Twentieth Ward, its companion, has not so much of a story to tell. It is related to the Nineteenth Ward, in this connection only by the sequence of the number. It is on the North Side, lying east of the river, while the Nineteenth Ward is south of Van Buren street on the West Side. Another relationship might be found in the fact that both wards have “slum districts.” A part of “Goose Island” and a fringe of the “Little Hell” territory are in the Twentieth Ward. The story of these, however, belongs to the Twenty-third Ward. The Nineteenth Ward has a part of the “Maxwell street district” within its borders and a portion of the ghetto. When the Hull House was started as a social settlement for the purpose of exercising an elevating influence on the neighborhood the place chosen for it was in the Nineteenth Ward, where it was deemed that missionary work of that sort should be first begun. ll of the Nineteenth Ward, however, is not of the slum sort, for the northwest corner of it is eminently respectable, not to say fashionable. Of the Twentieth Ward the same may be said. In the northeast crner of that is the McCormick Theological Seminary, and the neighborhood thereabout for blocks around is regarded as rather swell. 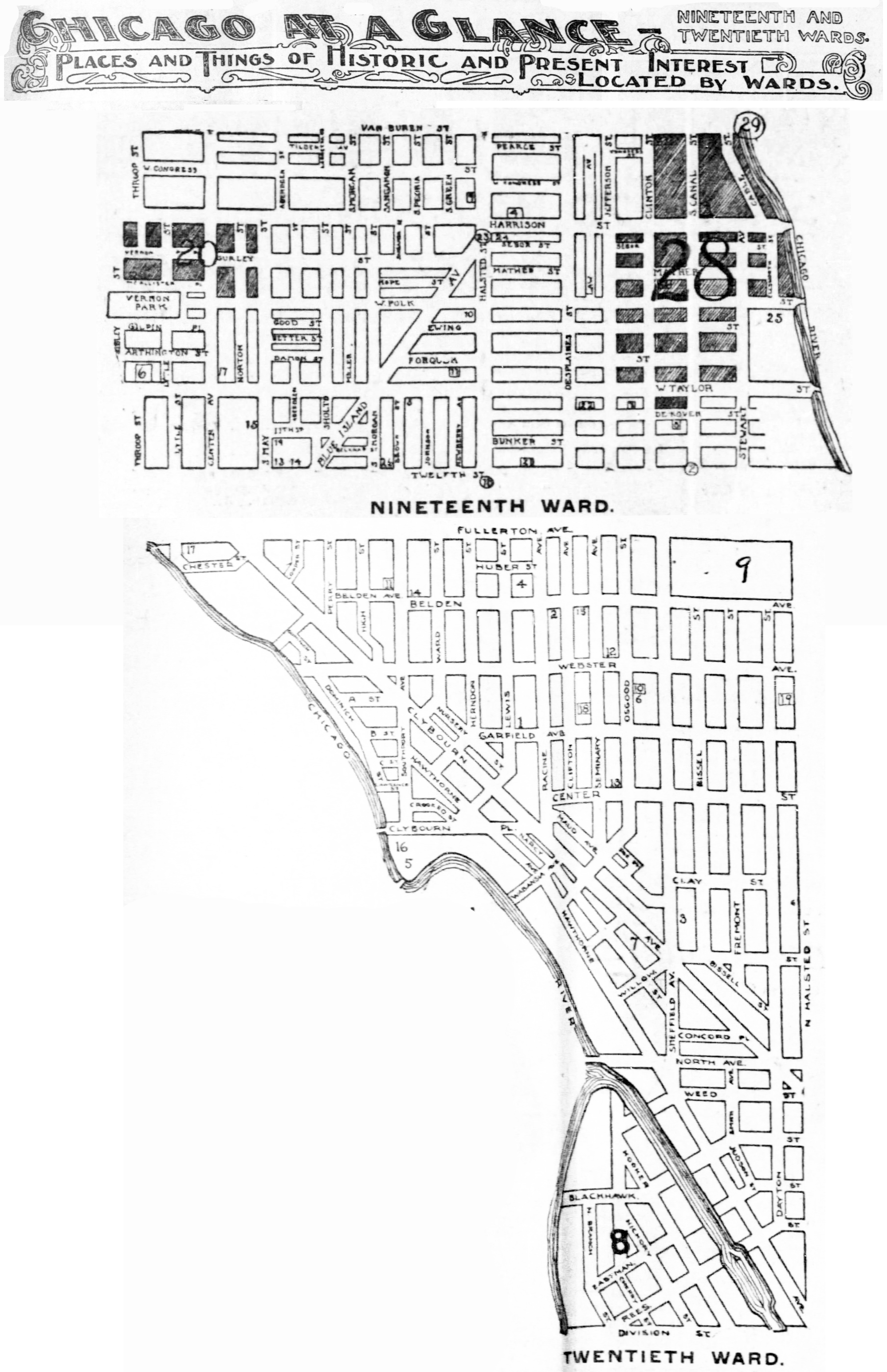 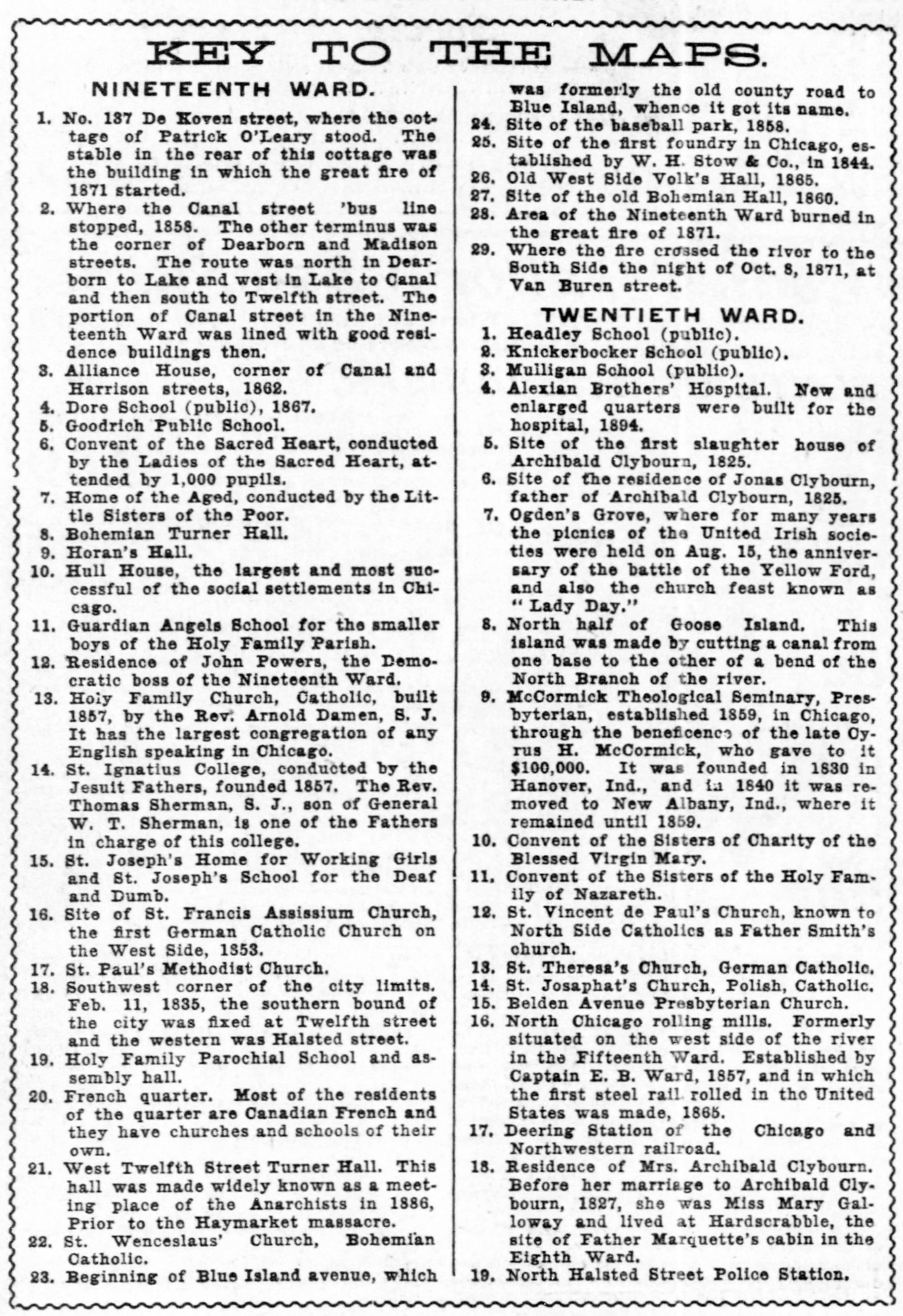 In what is counted a part of the alum region of the Nineteenth Ward is the house that bears a tablet to show that it stands where the cottage of Patrick O’Leary stood the fateful night of Oct. 8, 1871, for it was on that night that a fire started in the stable behind the cottage and burned up 17,450 buildings, large and small, in Chicago. In dividing Chicago’s history into geographical installments the fire chapter belongs to the Nineteenth Ward. 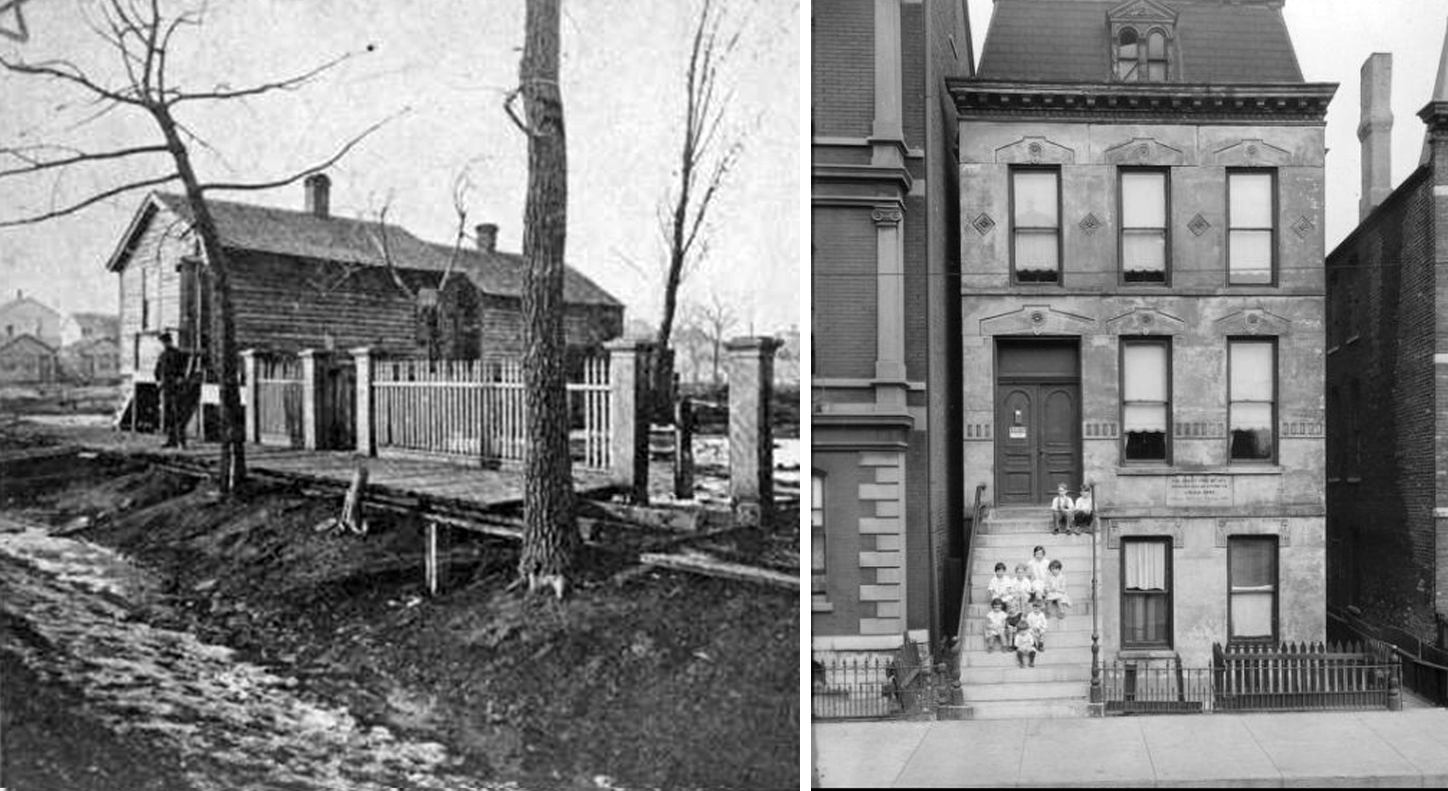 This ward has within its borders St. Ignatius College and the Church of the Holy Family.This college, which was chartered in 1870, with power to confer the usual degrees and with the faculties of a university, is one of the most famous educational institutions of the city. Mayor Carter H. Harrison is an alumnus of this college, which is conducted by the fathers of the Society of Jesus. The Church of the Holy Family has 23,000 communicants. It is situated in West Twelfth street, near Blue Island avenue. It was built in 1857 by the Rev. Arnold Damen, who was a companion of the celebrated Father De Smet, the Indian missionary. Father Dame was one of the most famous Jesuit preachers in the United States.

There are other churches and schools in the Nineteenth Ward. The Convent of the Ladies of the Sacred Heart, which has 1,000 pupils, is in West Taylor street. In the French quarter is the Church of Notre Dame de Chicago, which contains a grotto of Lourdes, with a shrine, before which some miraculous cures of the lame and sick are said to have taken place. St. Paul’s Methodist Church, which is famous as a church of the common people, is also in the Nineteenth Ward.

Great Settlement.
The Home for the Aged is one of the oldest charities of Chicago that is regarded with interest. It is a large institution in Harrison street within the French quarter. The homeless aged are received there and supported entirely by the charity given to the Little Sisters of the Poor. These religious women manage to secure sufficient to maintain the home, and yet they do not beg. They may be seen going about the city industriously day after day. They enter factories, workshops, offices, and even saloons, always seeking charity for their charges and never asking for it. They say only they are the Little Sisters of the Poor, and yet they find enough to house and feed and clothe the old men and women who come to them in distress. 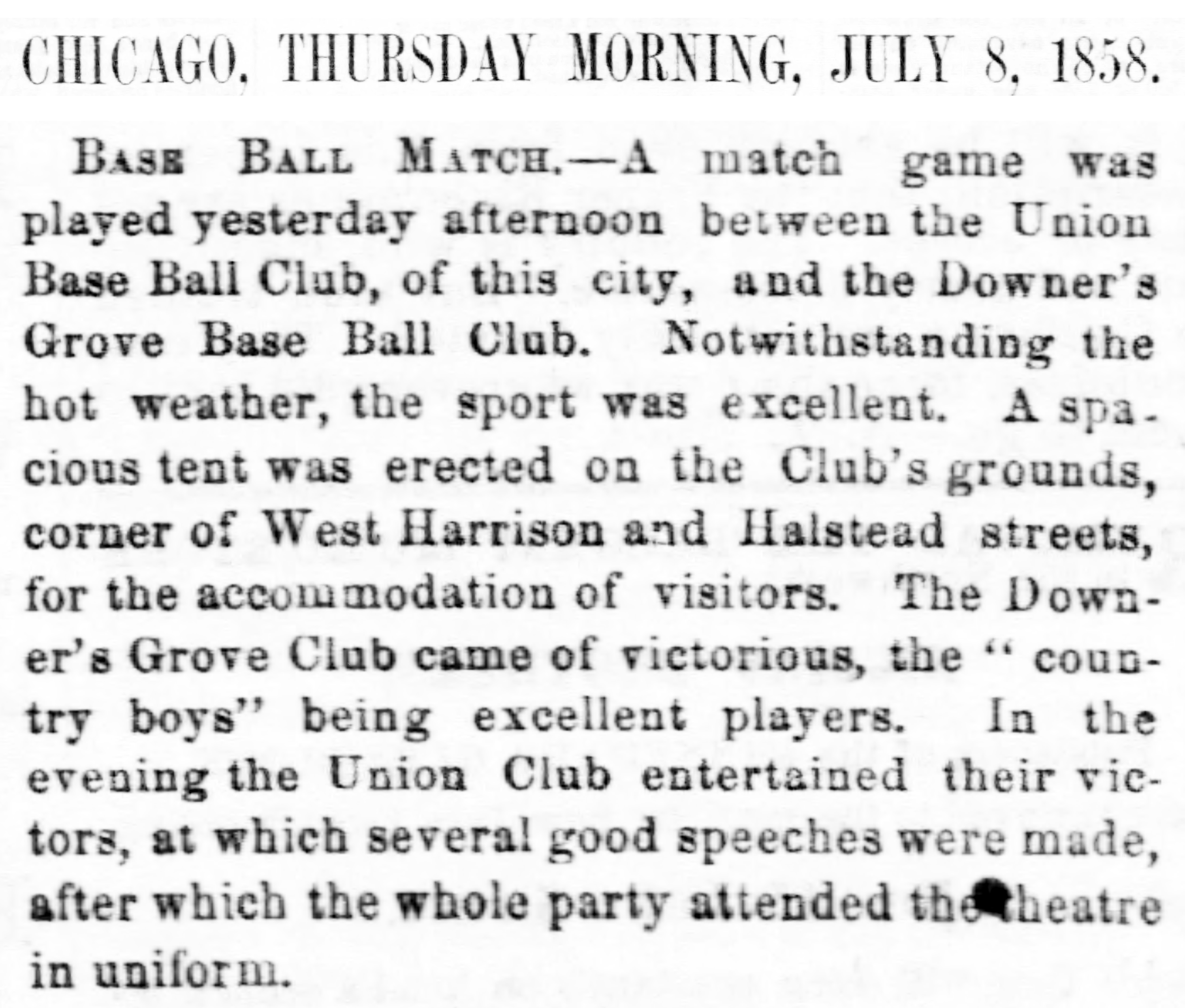 When the Hull House was founded only a few years ago it was not a large institution. The women whose love of humanity prompted them to go into the most desolate part of the city to live and to spread about them among the poor who were unable to properly help themselves the benefit of their wisdom and knowledge have had the pleasure of seeing Hull House grow until it is an institution of which Chicago is proud. It has grown, and the work it began has reached greater proportions than were even predicted for it by its founders. It has been enlarged until it contains clubrooms, assembly-rooms, gymnasium, and other appurtenances of a first-class clubhouse. Miss Jane Addams is the head of it.

One of the first baseball parks Chicago ever had was at Harrison and Halsted streets. This was back in 1858, even before Captain Anson began his professional career.It was about the time he was playing on the Notre Dame varsity. One famous game played on this ground is recorded in the annals of Chicago. At that time the pride of the City was the Union Baseball club. It was considered the best that ever played and when a challenge was issued to the Downer’s Grove baseball club to come and play with it there was surprise in Chicago that the villagers had the hardihood to accept the challenge. They did, however, and came. Nearly everybody in Chicago went to see the game. The feeling of pity for the village club did not last longer than the first inning, for the Union Baseball nine, the pride of Chicago, was cleaned up by a score of 23 to 3. That was in the day of big scores. The Union club never got over that walloping and soon after changed its name.

In the Nineteenth Ward is a souvenir of the days of the Anarchists. Twelfth Street Turner Hall was the principal meeting place for them. It was the place where the last Anarchist meeting of any account was held in Chicago.

The Oldest Seminary.
In the Twentieth Ward is the oldest institution of learning in Chicago, the McCormick Theological Seminary. It did make all of its history in Chicago, however, but is has been here since 1859. It was founded in 1830. The reason for its removal to Chicago was the donation for it made to the Presbyterian General Assembly of $100,000 by Cyrus H. McCormick, who made a condition with the gift that the seminary be removed to Chicago from New Albany, Ind., where it was there situated.

The Alexian Brothers’ Hospital, which is the largest in the city except the County Hospital in the Twentieth Ward. It is conducted by the members of the Order of Cellites, or Alexian Brothers, an order founded by St. Alexius of Rome in honor of St. John of God, of Spain. Brother Bonaventura came to Chicago in 1866 and established the hospital. He had neither money nor friends when he came, but before the end of the year he had a hospital at Dearborn avenue and Schiller street with three other brothers helping him. It was called St. Mary’s Hospital. In 1868 the hospital was moved to Franklin street, now North Park avenue. It faced Franklin street until was burned down in the great fire. It was rebuilt larger than before and continued in that site until 1895, when the lack of ground space compelled the removal of the hospital to Belden and Racine avenues. In 1869 the name of it was changed to that of the Alexian Brothers’ Hospital.

The map of the “night before fire” which left the Fire Department undermanned and overtired.

The Big Fire.
Just the night before the big fire started Chicago had a fire which until that time was the greatest it had known. It burned all of the buildings on the four blocks between Van Buren street, Clinton street, Adams street, and the river, and the loss was estimated at $750,000. The exact figures are not known, as most insurance companies were made bankrupt by the fire that started the next night. It is held that this fire was the cause of the big one becoming so big. The firemen were exhausted by the long fight with it and not able to combat the next one as well as they would otherwise.

Patrick O’Leary with his family lived in the cottage at 137 De Koven street. In the barn in the rear of the lot he kept five cows and a horse. In this barn the fire started. It was discovered at 8:45 o’clock. The O’Leary family was in bed. How it started has never been determined. The story of the cow kicking over the lamp was strenuously denied by Mrs. O’Leary. The first alarm of fire was sounded on a box at Canalport avenue and Halsted street, a mile away.