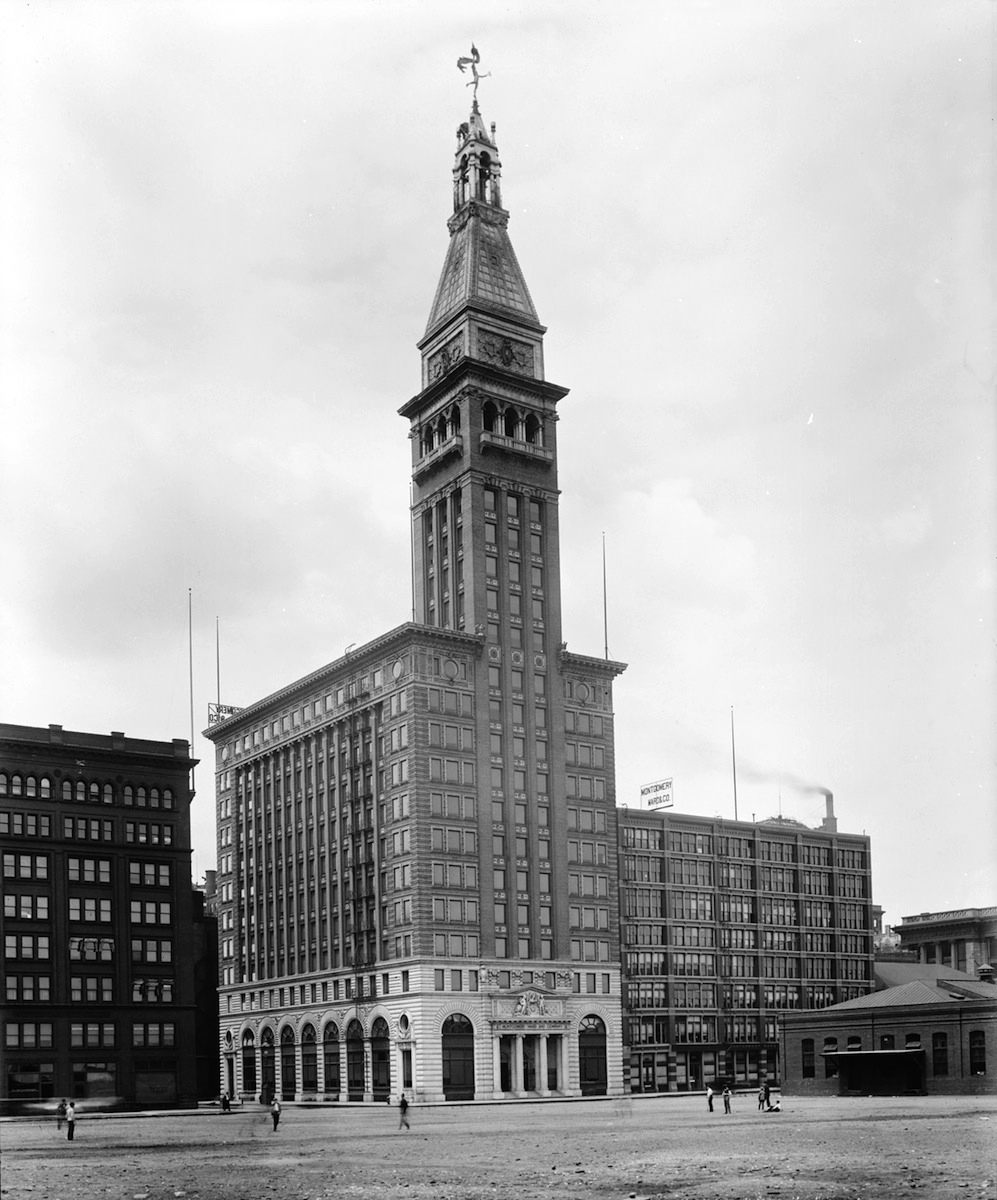 The Tower Building, at 6 N. Michigan avenue, on the northwest corner of E. Madison street, formerly known as the Montgomery Ward & Co. building, with a frontage of 86 feet on N. Michigan avenue and 163 feet on E. Madison street, was built in 1899 of steel frame construction to a height of 12 stories, with a tower and one basement, on 50-foot wood pile foundations. The three lower floors were designed for a live load of 200 pounds per square foot, the nine upper floors for 150 pounds per square foot. This made it possible for later owners to add four stories without reinforcing the columns of the lower stories. Richard E. Schmidt was the architect. The 22.5-foot weather vane, Progress Lighting the Way for Commerce, was set October 20, 1900. It was modeled by J. Massey Rhine. The street facade of the lower three stories is of carved Georgia marble. The cost of the original building was 36.7 cents per cubic foot.

At the time of its completion, this was the tallest building in Chicago. Originally at 394 feet high, the Montgomery Ward Building is currently 282 feet (86 m) tall, following the removal of a pyramid top and sculpture. 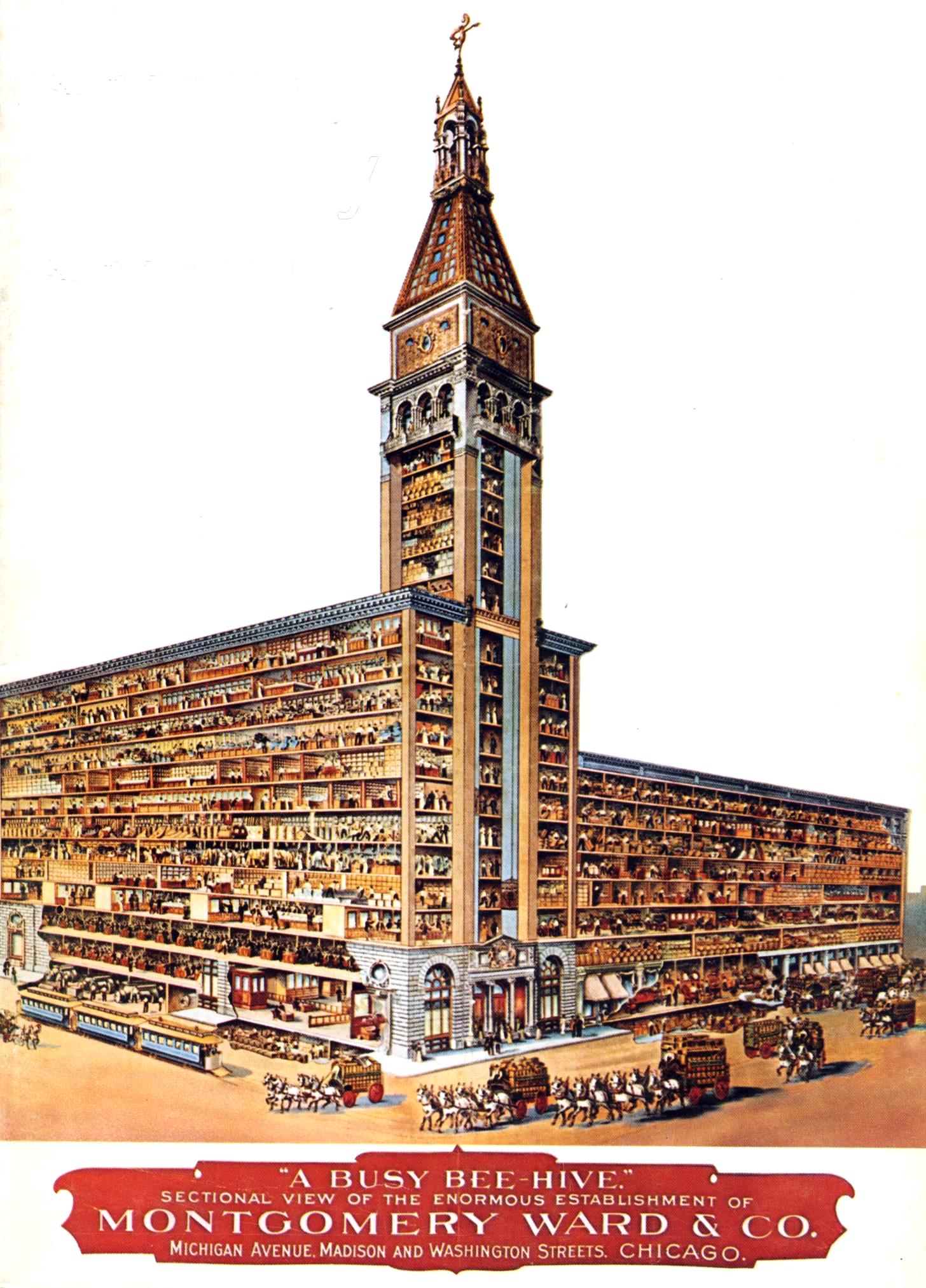 Montgomery Ward’s “busy beehive” in 1899.
The open-air observatory at the top of the tower was the highest point in Chicago. 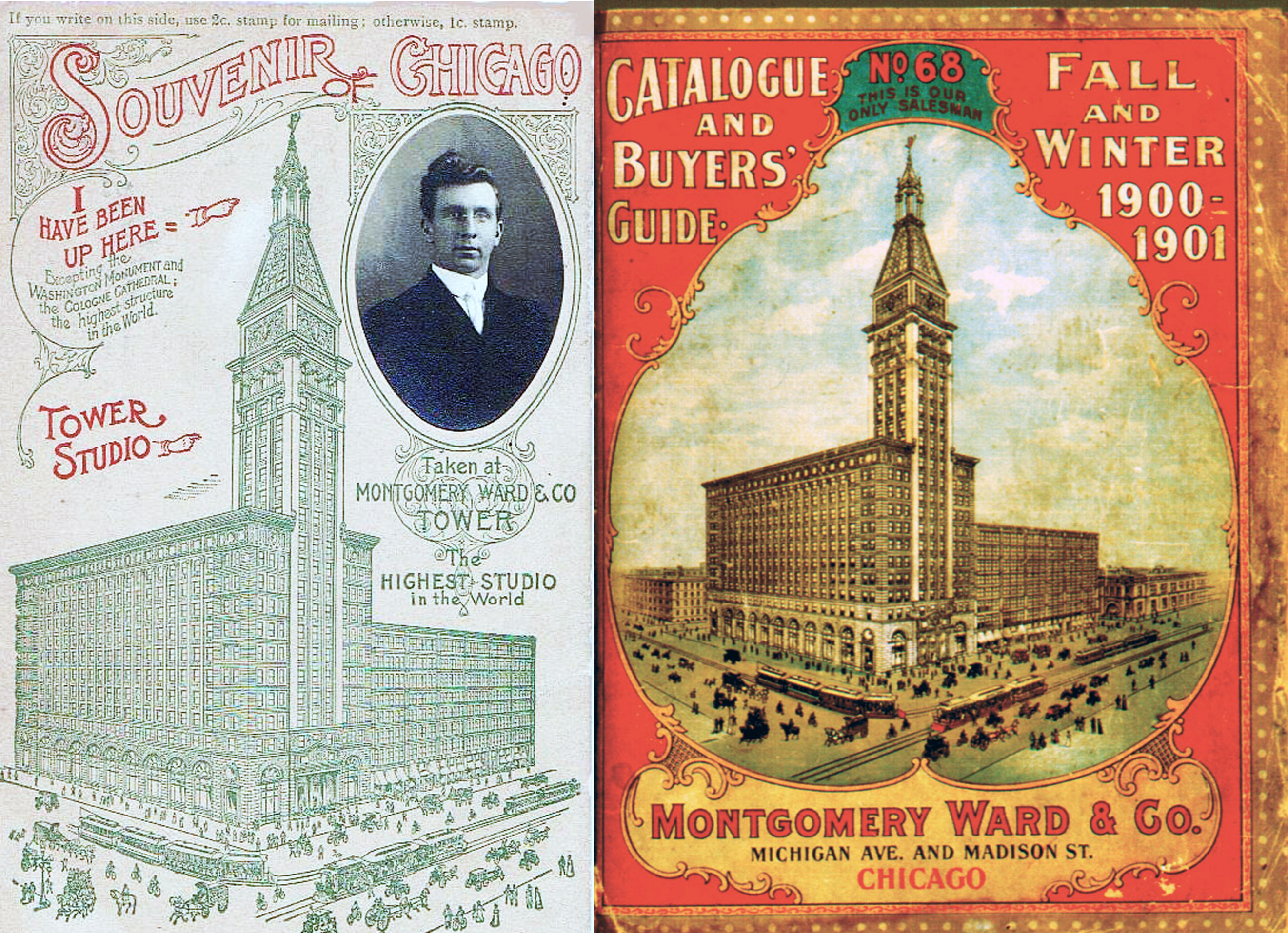 Montgomery Ward won his long fight for the preservation of the entire lake front for park purposes when the Supreme court of Illinois denied a rehearing in the case. The whole tract from Randolph street to Park row and from Michigan avenue to the harbor line, or breakwater, is thus secured permanently for a park, and the erection of any building in the area is prohibited. 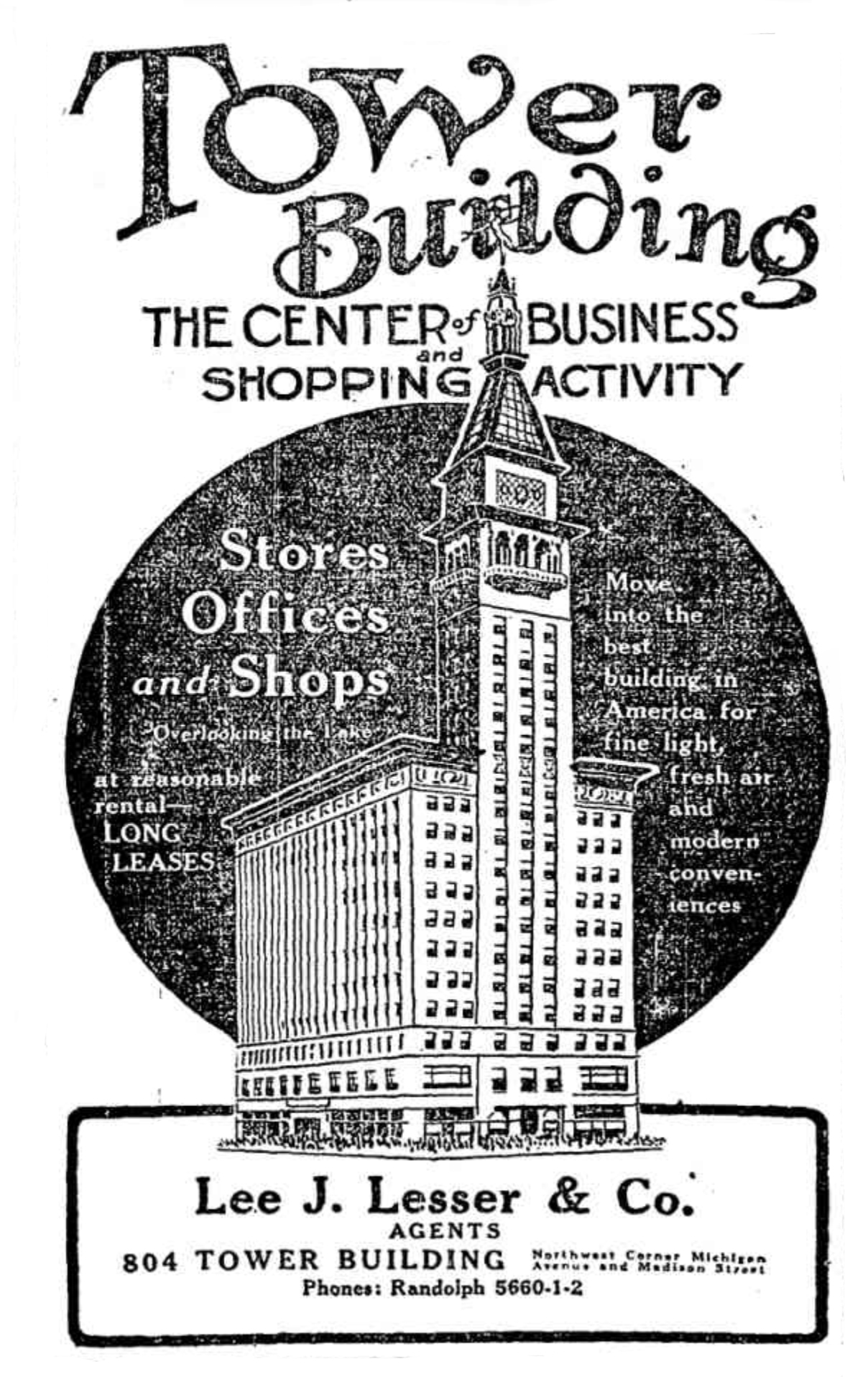 A quiet renaissance going on along Michigan Avenue south of Randolph Street has most of the virtues that architectural preservationists are forever encouraging. With rather consistent sensitivity, the mix of ordinary and distinguished buildings facing Grant Park are being renovated instead of torn down in the false name of progress.

As the work continues, one of the most interestingly redone structures has turned out to be the 20 N. Michigan Ave. building, formerly the John M. Smyth Co. furniture store. It is a splendid example of intuitive architecture –the kind of design and decision-making that cannot be taught by professors or copied from the work of others.

Nagle, Hartray & Associates Ltd. is the Chicago architecture firm that accomplished this transformation. They took a peculiar building that had practically no esthetic merit and turned it into a handsome structure that can hold its own against the classiest architecture on the street.

Beers, Clay & Dutton designed the original eight-story building in 1885 for Montgomery Ward and Co., which used it as a warehouse. It was constructed in stages, which must account in part for its eccentric proportions.

Each floor was of a different height, horizontal spacings were not uniform, windows were of varied sizes and rows of columns were out of alignment. To put it crudely, it was (and to a degree still is) one of the most geometrically cockeyed buildings on Michigan Avenue.

When John M. Smyth took it over in the 1950s, the brick-faced building was given an imitation granite facade on the bottom two stories, a large rooftop sign and such uninspired cosmetic touches as an exterior coat of gray paint. After Smyth moved out in 1982, the U.S. Equities Group bought the building and decided to turn it into a first rate office mid-rise with retail space on the ground floor.

If you stand across the street today and look very closely, you can see that 20 N. Michigan Ave. is still not totally symmetrical. Yet no one but an architect or a builder would ever notice, anyway, and the simple elegance of the structure is what really arrests the eye.

The gray paint was removed and upper surfaces taken back to their red color (in several shades, actually). Replacing the phony granite around the base is a limestone skin with deeply set back joints that give the surface a rusticated look consistent with neighboring buildings.

At street level, the window wall facing Michigan Avenue is stepped back to increase retail exposure and form an inviting entryway. The historic

“Chicago window” form (a large section of glass flanked by two smaller ones) adds character to the composition.

At the rooftop summit, shell-like ornaments top each of five piers rising up the side of the building. The shells may remind some people of Botticelli, or what have you, yet they are used unselfconsciously. Illuminated at night, they enhance the view of the skyline from Lake Shore Drive.

The inside of 20 N. Michigan Ave. comes as a pleasant surprise if you remember it from the prosaic furniture store days. Nagle and Hartray carved a skylight-topped atrium up the center–a common device among rehabbers these days, but no less effective for that.

Because the building is framed and floored with wood, tough fire safety requirements had to be met under the city building code. The atrium`s sides are thus enclosed with wire-strengthened glass, and the whole place is chockablock with sprinkler heads. Structural engineer Robert Beer solved some of the most tedious problems.

That leaves the lobby, which is no small success. The rough terrazzo that paves the outdoor entryway becomes smooth as it flows indoors in the same pattern. In the atrium section of the lobby space is a marble and granite sculpture-fountain by Carolann Haggard. Flanking the piece are a pair of trees whose trunks rise from old-fashioned patterned iron grates set flush with the floor.

Angling off from the atrium is a broad passage leading to the elevators. Above each of the elevator doors are miniature versions of the rooftop shells, here used as floor level indicators. Again, the shells simply look right, not cute. The shape of the wood paneling in the elevator cabs thoughtfully echoes the rustication of the building`s exterior limestone skirt.

Nagle and Hartray`s firm grasp of detailing and respect for subtlety never waver in this building. What used to be a bland, characterless structure now has a personality. One may be hard-pressed to hang a stylistic label on it, except to say that it has the strength and clarity long associated with the best design in Chicago.