As it has done in New York, so in Chicago, business is moving North, out of the Loop, too long the imaginary compass of commerce. Northward to quieter streets, clearer skies, more pleasant surroundings.

Seeking the ideal site for its own general offices, the Colgate-Palmolive-Peet Company deliberately and advisedly chose this location and are erecting here this outstanding vattlement of business, at what will possibly be, for many years to come, the dividing line between commercial and purely residential Chicago. Within this tapering tower this company has provided space—not only for itself—but for other business and individuals of equal standing and financial integrity. 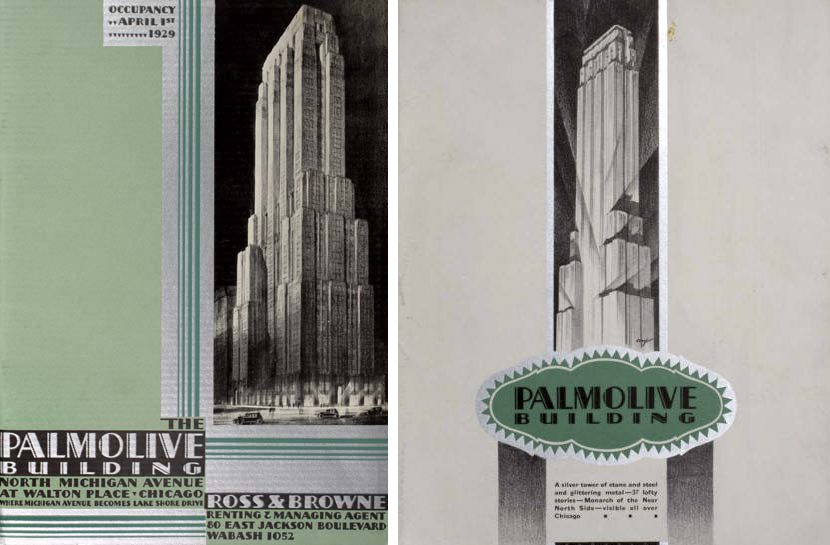 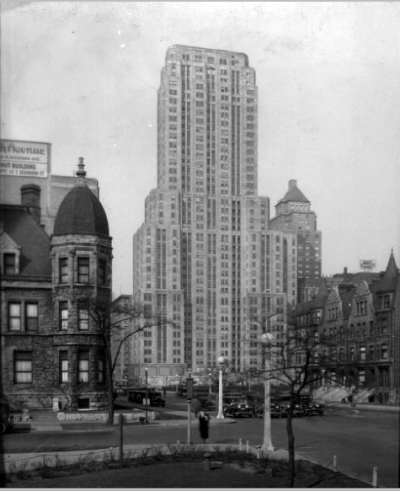 A study of the tenant list to date impressively confirms this. Two reasons will motivate moving to the Palmolive Building:

Modern business men, jealous of the hours they now waste yearly in city transportation, will welcome this opportunity to work near their homes, live near their offices. Magnificent far-sweeping views, from the upper floors over lake and city, will bring new pleasure to their business hours, new inspirations to their work. The test of tenancy will assure them neighbors of the highest character.

The very address —”Palmolive Building”—will add an invisible accolade to their letterheads. Farsighted employers will grasp this opportunity to more happily house their workers in a building surrounded with sunshine and clear air, removed from the distractions of the Loop, yet convenient to the busses and car lines.

Experience is proving that the better class of office help seek positions so located. And for those favored men of hard-earned leisure who now require simply a business address somewhere, what more logical than a spacious study, high aloft in this cliff of commerce?

In such a distinguished structure one will naturally expect—and will find—all the facilities and refinements of the modern American office building. A splendid restaurant, a popular-priced lunch room, barber shop, brokerage office, and resident valet.

An interesting architectural feature of the Palmolive Building, and one guaranteeing additional light and air for every office, will be the six series of set-backs on all four sides making the entire building virtually a tower. Firms taking entire floors at these set-backs may use them as promenades and if they so desire, beautify them with formal planting. Chicago Tribune, August 13, 1930 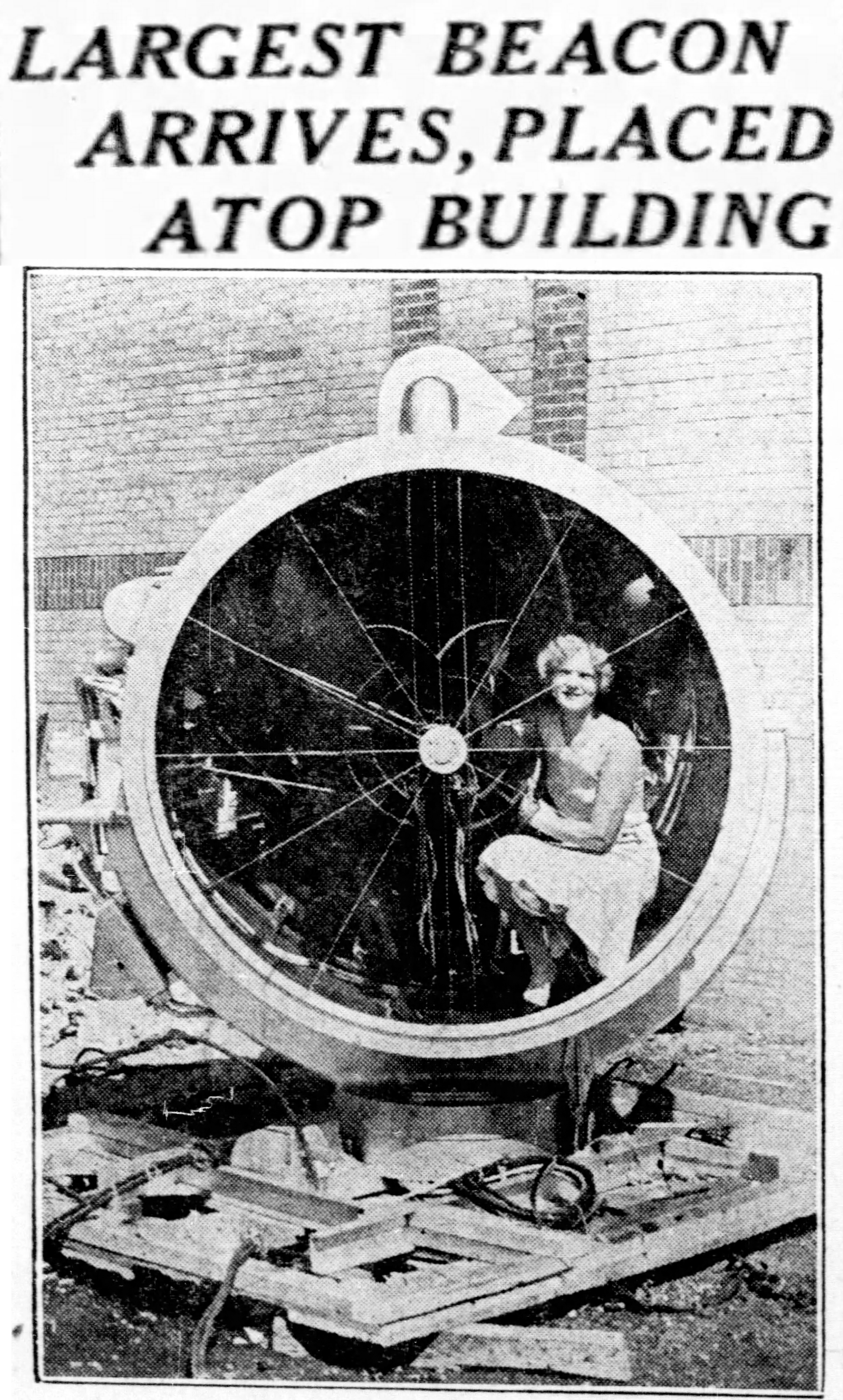 The Lindbergh beacon, the gift of Elmer Sperry to the city of Chicago, arrived here yesterday and was raised to position 600 feet above Michigan avenue atop the Palmolive building. It is the most powerful beacon ever constructed, having a beam 500 miles in length.

The two billion candle power beacon weighs more than a ton. By its light pilots will be able to read a newspaper 50 miles away. The beam will be visible to pilots 300 miles away from Chicago. The beam would be visible 200 miles farther but distances greater than 300 miles, due to the earth’s curvature, it is an at an altitude too great for airplanes to reach. The beacon will be dedicated dueing the national air races Aug. 23 to Sept. 1.

Evelyn Day (left), of 1323 Farwell avenue in new lamp which will be installed in the new tower of North Michigan avenue building.

Chicago to Have World’s Most Powerful Aerial Beacon

A TWO billion candle power high intensity arc light, the biggest lamp ever mounted as an aerial beacon, soon will be projecting its beam into the sky from a tower atop one of Chicago’s tallest skyscrapers. The light, the gift of its inventor, Elmer A. Sperry, famous inventor of the high intensity arc, the gyroscopic compass, gyroscopic helms-man, is to be named the “Lindbergh Beacon,” as a permanent memorial to the colonel’s famous one-man flight to Paris.

Aviators flying in the neighborhood of Milwaukee, north of Chicago, or St. Joseph, Mich., on the east shore of Lake Michigan, will be able to read their newspapers by the beam. In tests of the big light made from the ground recently an aviator flying down The beam was able to read the New York Times when fifty miles away from the light.

On its lofty perch atop the 37 story Palm-olive building the light, which has an eighty inch lens, will be 603 feet above the street. It is to be mounted on a steel tower more than 100 feet high, the sides of the tower encased in gleaming aluminum.

To avoid blinding people on the ground, the light is to be pitched two degrees above the horizon. At 300 miles, or about the vicinity of Cleveland, the light will be approximately 39,000 feet above the earth, owing to its pitch and to the curvature of the earth. Further on it will be lost in space, and no one probably, will ever see its extreme range of 500 miles.

In experimenting Mr. Sperry had to find an electrical conductor with a higher melting point than carbon, and carbide in a molten form was the answer. Carbon melts at 2800 degrees and carbide at 5000. A way was devised of using the two elements; a carbon electrode was brought into contact with a pool of molten carbide; and the result was an arc light of extremely high intensity. 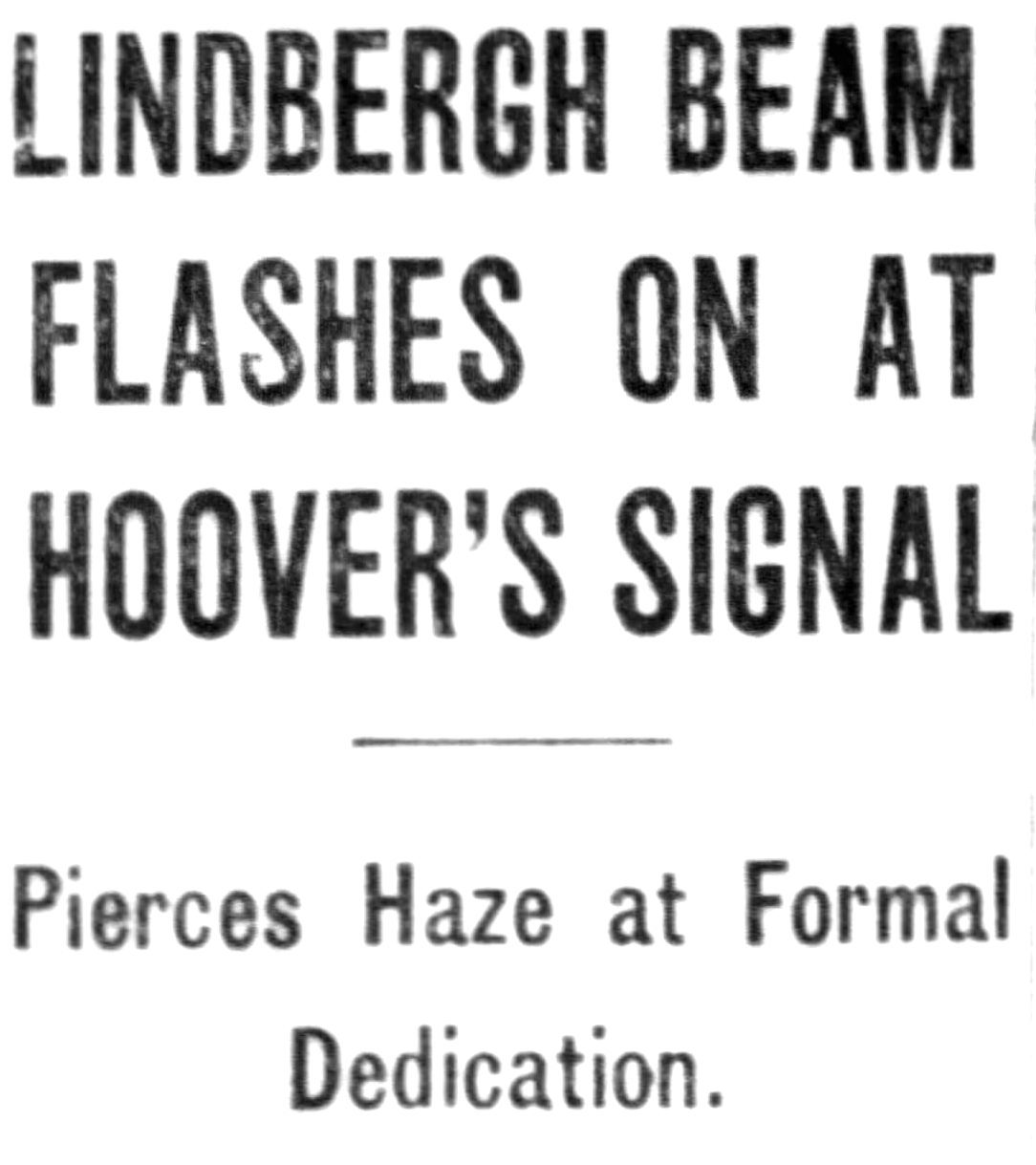 Boring into the early autumn haze that hung above the city, the mighty Lindbergh air beacon shot its blue gray beam into the skies at 9 o’clock last night, on President Hoover’s signal, and began its official service to night flyers. Short ceremonies on the roof of the Palmolive building, the beacon’s station preceded the President’s touching of a button in the White House.

World famous aviators were present. Admiral Byrd, wired his regrets, but Col. Charles A. Lindbergh, the ex-airmail pilot whose name is perpetuated by the light, was not present and no communication from him was read.

Invited by James Simpson.
At the dedication, it was reported that Col. Lindbergh was actuated in absenting himself by a desire to avoid reporters and cameramen. He was invited here in a long telegram sent last Thursday by James Simpson, a negative reply being received two days later. Members of the committee sponsoring the celebration were told of Lindbergh attitude by his secretary, it was said.

A dinner was served at 8 o’clock last night on a terrace below the aluminum covered steel tower that supports the powerful beacon and a lesser light beneath it which points to the municipal airport. Attending it were Rear Admiral Moffett of the navy’s air forces, Maj. Gen. Frank Parker, Sixth corps area commander; Sir George Hubert Wilkins, the explorer; Capt. Fritz Loose of Germany, who is here for the air races, and many others whose names are known in aviation.

Charles S. Pearce, president of the Colgate-Palmolive company, welcomed the guests and presented Merrill C. Meigs, chairman of the civic committee in charge of the dedication. Mr. Meigs in turn introduced City Attorney William D. Saltiel, who accepted the light in behalf of the city. The speechmaking closed a few seconds before o’clock. 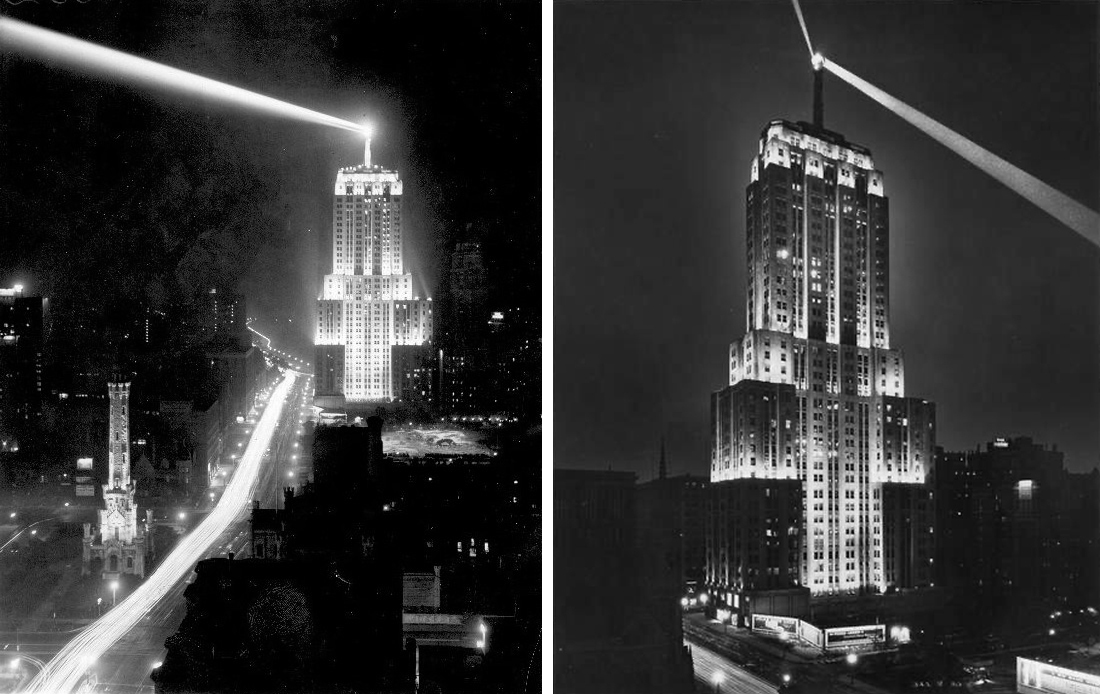 The Palmolive Building
Beacon at Night
1930

All Eyes on Light.
Lights were dimmed on the lofty roof and all eyes turned to the tower above, topped by the light platform which stands 602 feet above the street. Just at 9 p.m. a bell tinkled.

From the platform two beams of light shot out through the murk. Above, the immense two billion beam candle power lamp cut its dark blue swath through the haze in a reflected ray sixty inches in diameter. Below it, the eleven hundred million candle power light, thirty-six inches in diameter, but weak in comparison to its brother, was trained on the municipal air port and will remain fixed to point the way for night air visitors.

For a few seconds the big light was held stationary, pointed to the southwest, then it began a leisurely turn touching the loop skyscrapers as it went. The new Merchandise Mart, already blazing with lights, was given added brilliance by the beam; the Mather Tower loomed out of the darkness as the shaft brought it into view, and a degree or two further east the beam gilded the flag staff of the Tribune tower, and illuminated the mosque-like dome of the Medinah Athletic Club.

But it was no night for a display of the light’s power, the engineers said. In good weather it is claimed that the beam will be visible to aviators 250 miles away and will form an aerial guidepost for all of Chicagoland.

Built and presented to the city of Chicago by the late Elmer A. Sperry, the gift commemorates, in the words of the printed program, “the heroic flight of Col. Charles A. Lindbergh from New York to Paris on May 21, 1927.”

For the first time since its installation in August, 1929, the Lindbergh beacon atop the Palmolive building on North Michigan avenue was dark last night.

The two billion candle power light was a landmark to night flyers and a familiar part of Chicago’s skyline was doused as the request of Capt. E. A. Lofquist, chief of staff of the ninth naval district. He said is was necessary because of the beacon’s possible advantage to the enemy in event of an air raid.

Often called the most powerful beacon in the world, the light was a gift to Chicago by Co. Elmer Sperry, wealthy inventor. The Palmolive building owners also extinguished flood lights on the structure 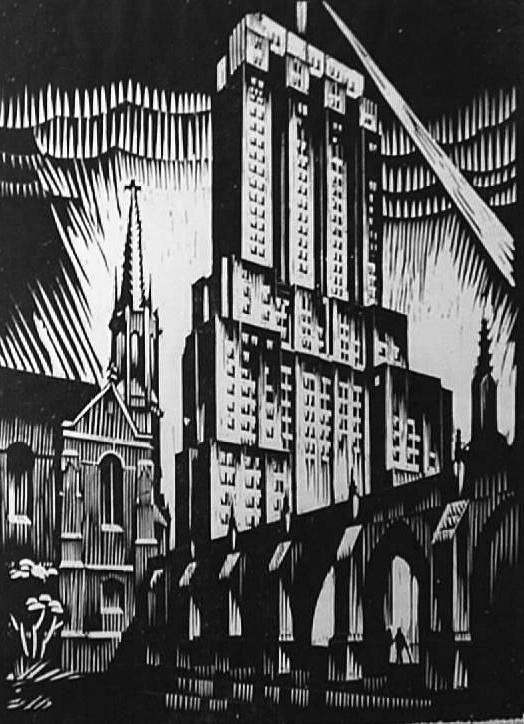 A beacon atop the Palmolive Building, once a fixture of Chicago’s night sky but mostly a memory for the last quarter-century, is to be lighted for the 4th of July, though only for several hours.

Kim Dooley of Draper & Kramer Inc., which manages the Palmolive, a landmark building at 919 N. Michigan Ave., said Monday that the beacon would be turned on from about 8 p.m. to midnight Wednesday. It is to oscillate in am arc over Lake Michigan, from about where Belmont Avenue would extend into the water to about Monroe Harbor.
‘
She said Draper assured residents of two taller, neighboring towers that it would light the beacon for Wednesday night onlky and restrict its sweep so that the strong beam would not annoy them.

If it goes well Wednesday, her firm may seek permission to light the beacon on other special occasions, Dooley said.

Draper bought the 37-story Palmolive in 2001 and converted it from offices to condominiums. In 2001 and 2002, it conducted a brief and not very successful tests of a refurbished World War II beacon it had bought. Each time, neighbors complained about the light and won sympathy from their alderman, Burton Natarus.

Dooley said her firm refined the beacon, adding a shield to focus its beam and prevent peripheral scattering of light at its base. The condo association boards at the nearby John Hancock Center and I Magnificent Mile then gave the green light for a single holiday test of the beacon.

Ald. Brendan Reilly (42nd), Natarus’ successor, said he is going along with the test but “will be monitoring it to make sure its not disruptive to neighbors.” As for the possibility of future lightings, he said, “Let’s see how the test goes.”

The Palmolive, an Art Deco beauty designed by Holabird & Root, opened in 1929. A year later, the Lindbergh Beacon, named for the famed aviator, was installed atop its mast, some 600 feet from the ground.

The beacon, described then as “the world’s most positive searchlight,” became a skyline icon and a boon to aviation. Its rotating beam pierced the night, and its fixed beam pointed pilots to what is today called Midway Airport.

The Lindbergh Beacon glowed until 1981, when complaints from dwellers of taller buildings that had been constructed nearby. It was removed in 1988 and donated to a Wisconsin museum. 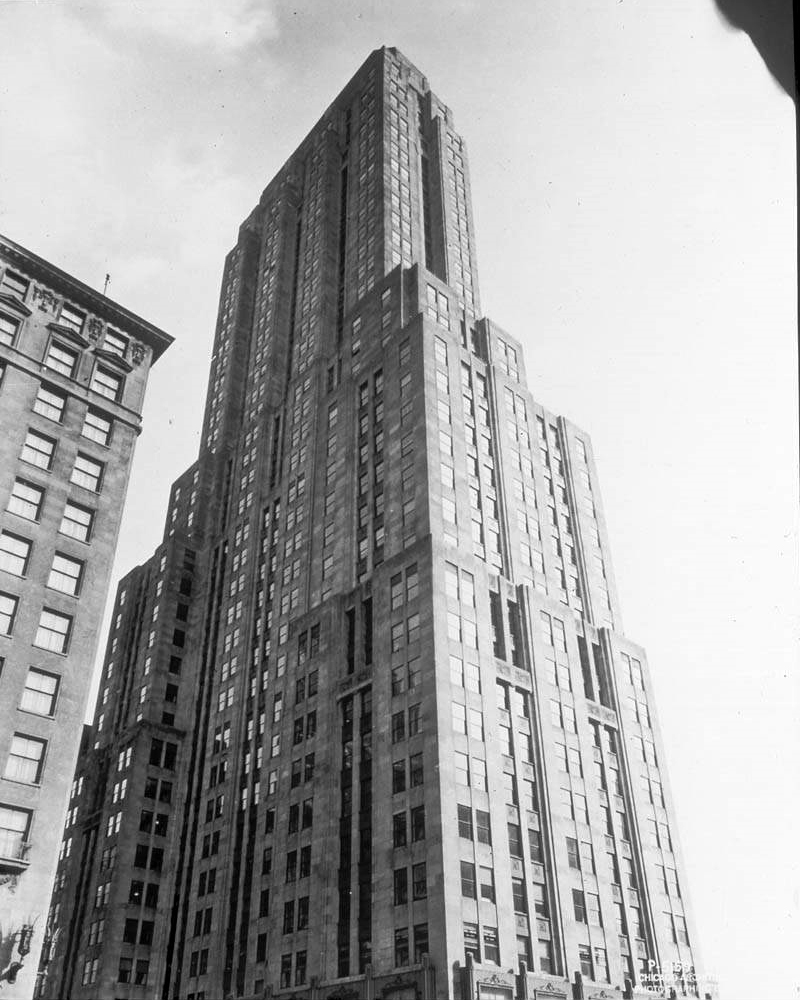