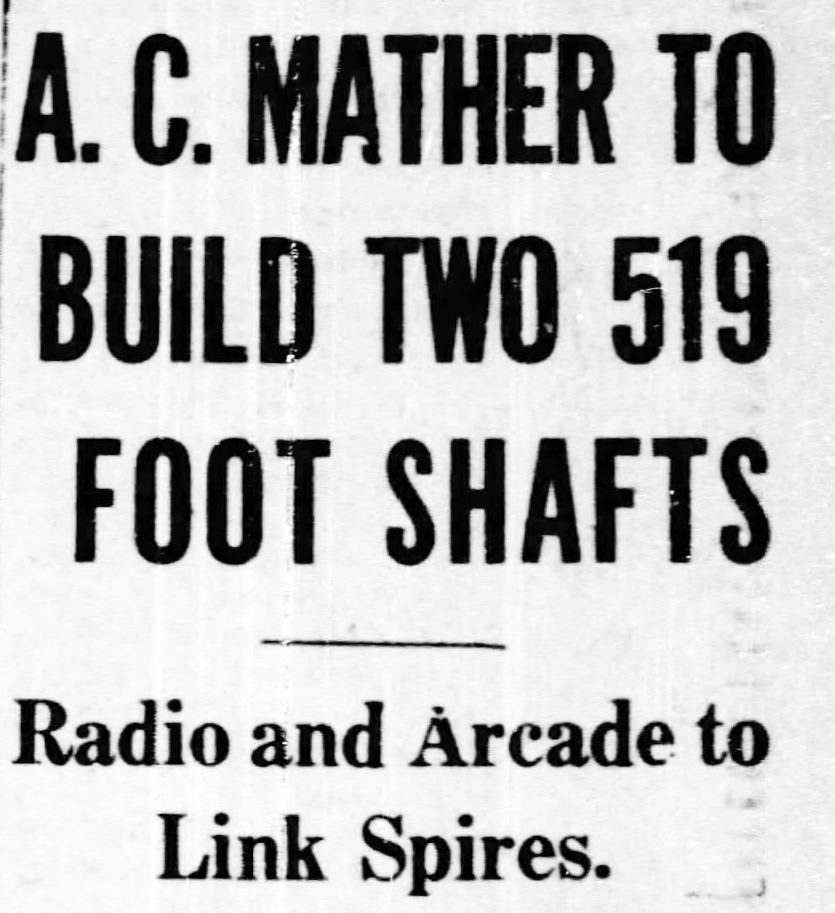 BY AL CHASE.
(Real Estate Editor.)
Fondness for animals and a horror at seeing any dumb creature suffer were the keystones to the fortune of Alonzo C. Mather, Chicago and California millionaire head of the Mather Stock Car company, who last night telegraphed The Tribune from Buffalo details of one of Chicago’s most interesting and unusual building projects—the world’s tallest twin building project, to face on both Wacker drive and Michigan avenue. Herbert Hugh Riddle will be the architect.

Each of these twin Gothic towers will be 519 feet above street level and will be linked at their skymost peak with one of the most powerful radio broadcasting aerials in the world. A magnificent arcade will connect the bases of the two shafts, thus linking the two boulevards with a new covered thoroughfare.

Twin No. 1 on Wacker Drive.
The first of the twin skyclimbers will be at 345-51 Wacker drive, about thirty feet from the lot line of the London Guarantee building. It will soar skywards 519 feet above the boulevard level, which means it’ll actually be two feet taller than the Jewelers’ building, half a block to the southwest. The Jewelers’ is actually 525 feet high, according to F. P. Dinkleberg, its architect, but as Wacker drive is eight feet higher in front of the new Mather tower, the latter building is actually a trifle taller than the Jewelers’.

Following the completion of the first Mather tower, its twin will be erected at 324-330 North Michigan avenue, where the three story Mather building now stands. The alley will be bridged over and a handsome arcade will run through from boulevard to drive.

To Be Erected by W. A. Illsley.
W. A. Illsley, who has been engaged in the construction of tall steel frame buildings in Chicago and adjacent cities for the last thirty-five years and who has just completed the Union League club, one of the world’s finest club buildings, has been awarded the general contract. He is now taking figures.

Mr. Illsley states that if work begins the middle of August the caissons can be completed by October and the the first tower should be ready for tenants by May 1, 1927.

Will be of Gothic Design.
According to Herbert Hugh Riddle the architecture will be along Gothic lines and the exterior will be of semi-glazed terra cotta. The building above the twenty-fifth floor will be octagonal in shape. There’ll be forty-two stories, surmounted by an observatory.

Mr. Mather recently bought the Wacker drive site, 65×100, from the Chicago Title & Trust company, trustees, for $500,000. Perry Ulrich was broker for Mr. Mather in the purchase and will have charge of the renting of the new towers. Mr. Ulrich states that the first six floors of Tower No. 1 will be devoted to exclusive shops. An attempt will be made to secure some of New York;s smartest stores. 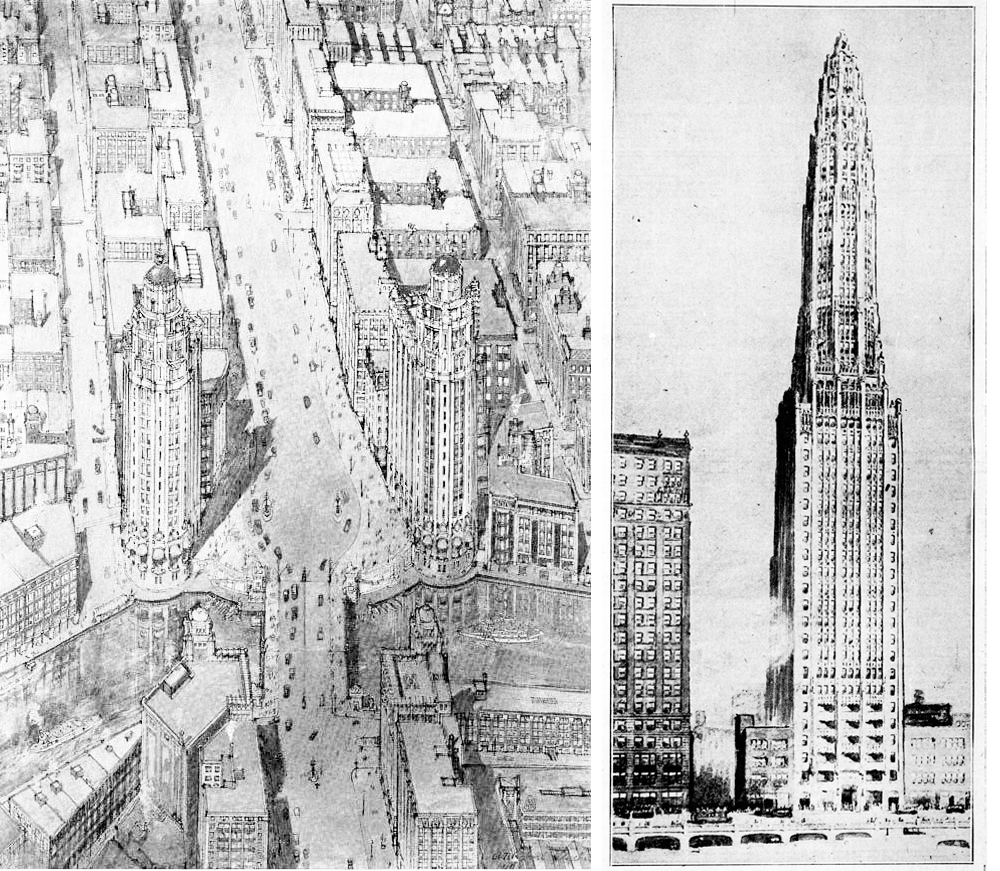 Helps Suffering Cattle.
Many years ago when Alonzo C. Mather was a young man in his early twenties he noticed how terribly cattle suffered while being transported over railroads. His love of animals urged him to do something and he invented and put on the market a car in which cattle were treated humanely.

The Mather Stock Car company, of which he is president, is the largest of its kind in the world. At one time it had a maximum of 11,000 cars rolling over American and Canadian rails. The headquarters of the company are in the Mather building, site of Mather Tower No. 2,. Mr. Mather now spends much of his time at his southern California home. 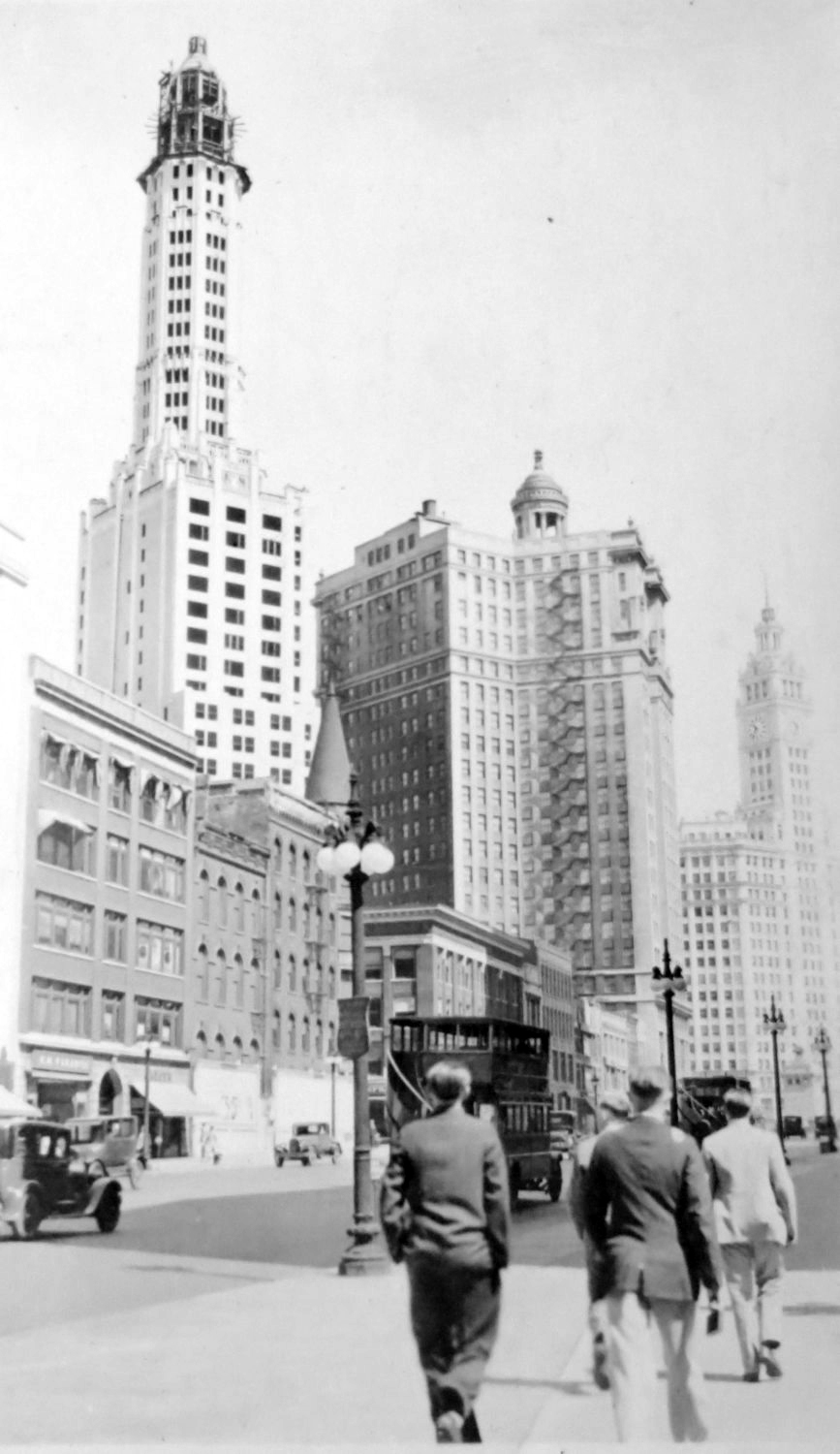 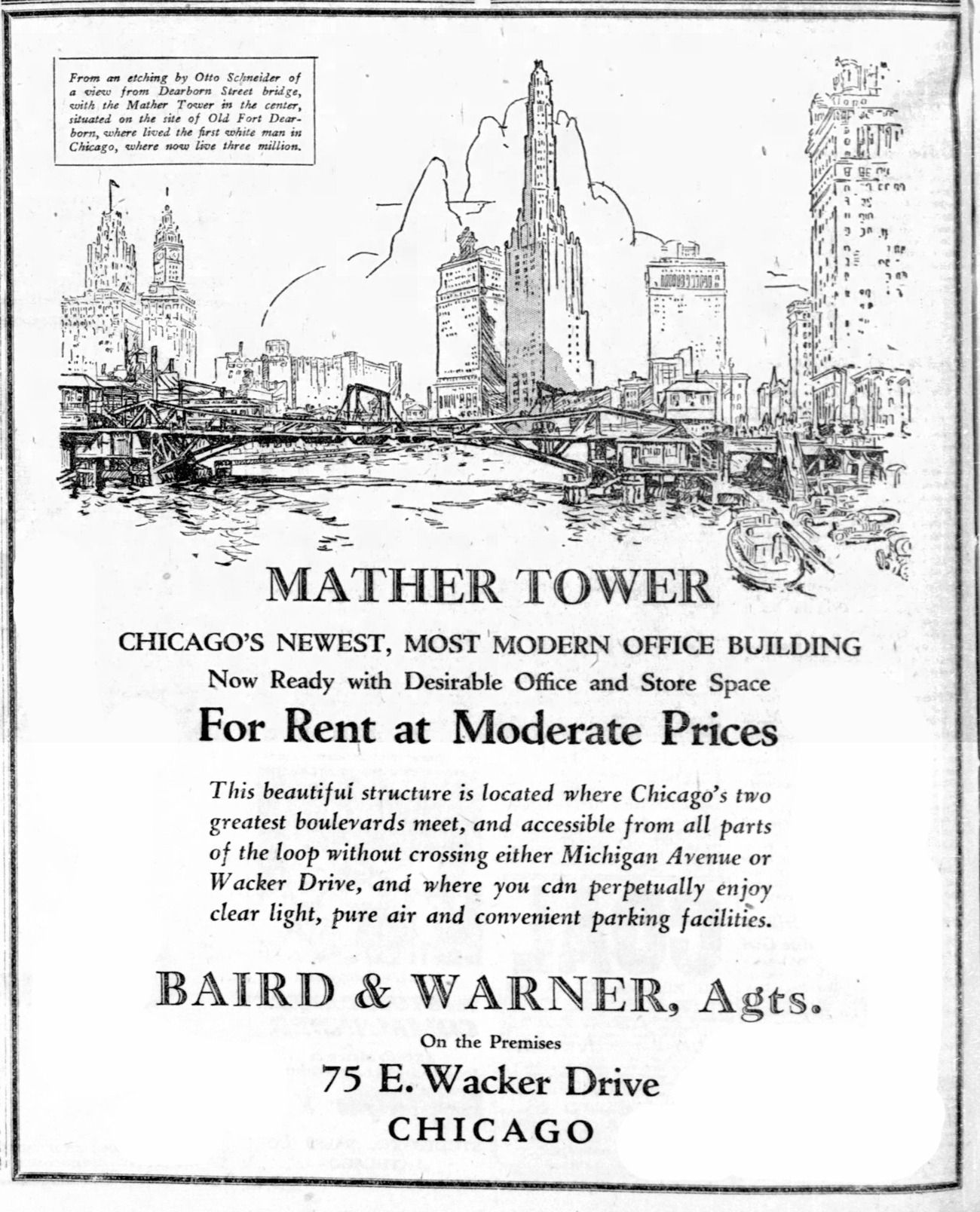 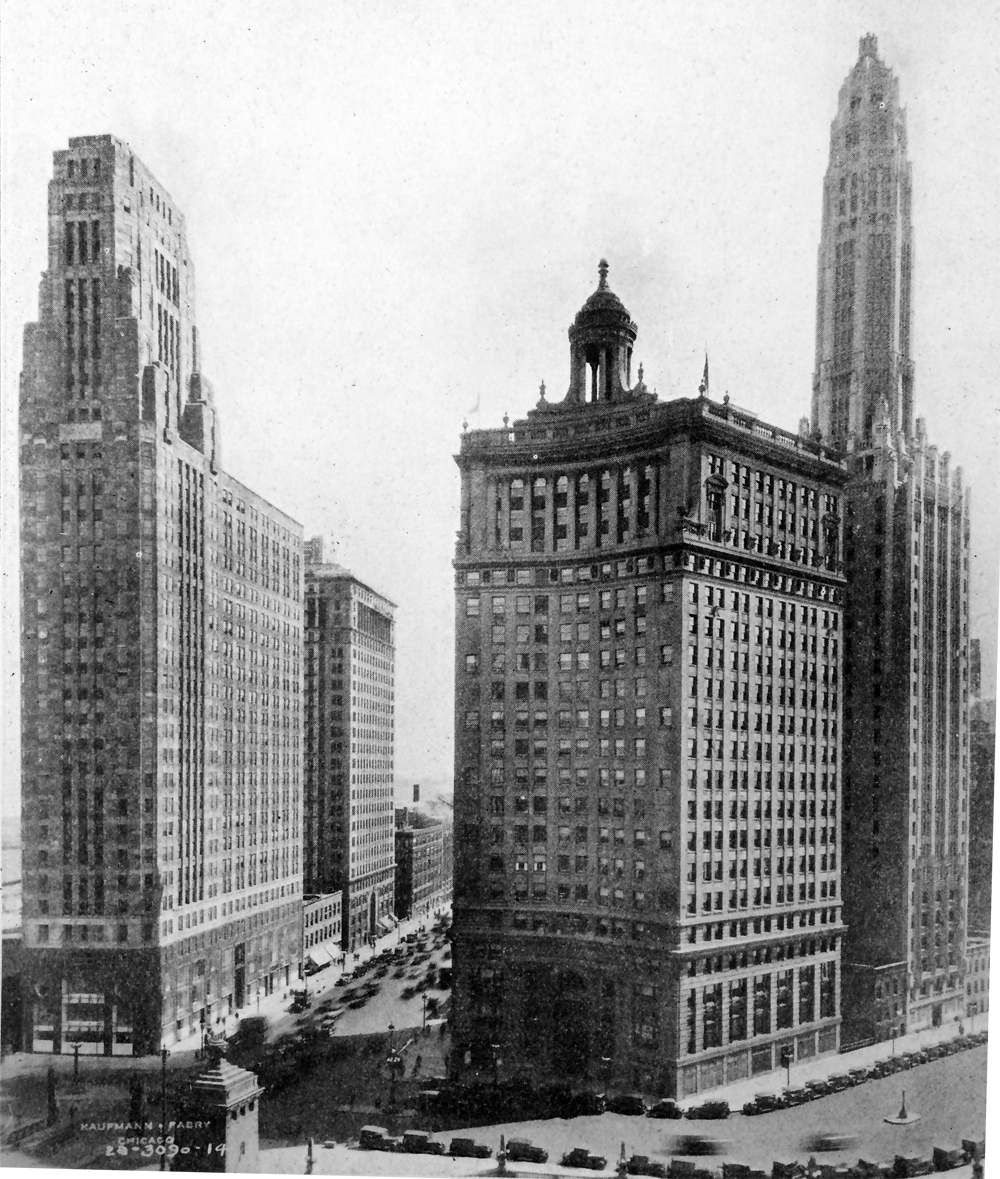 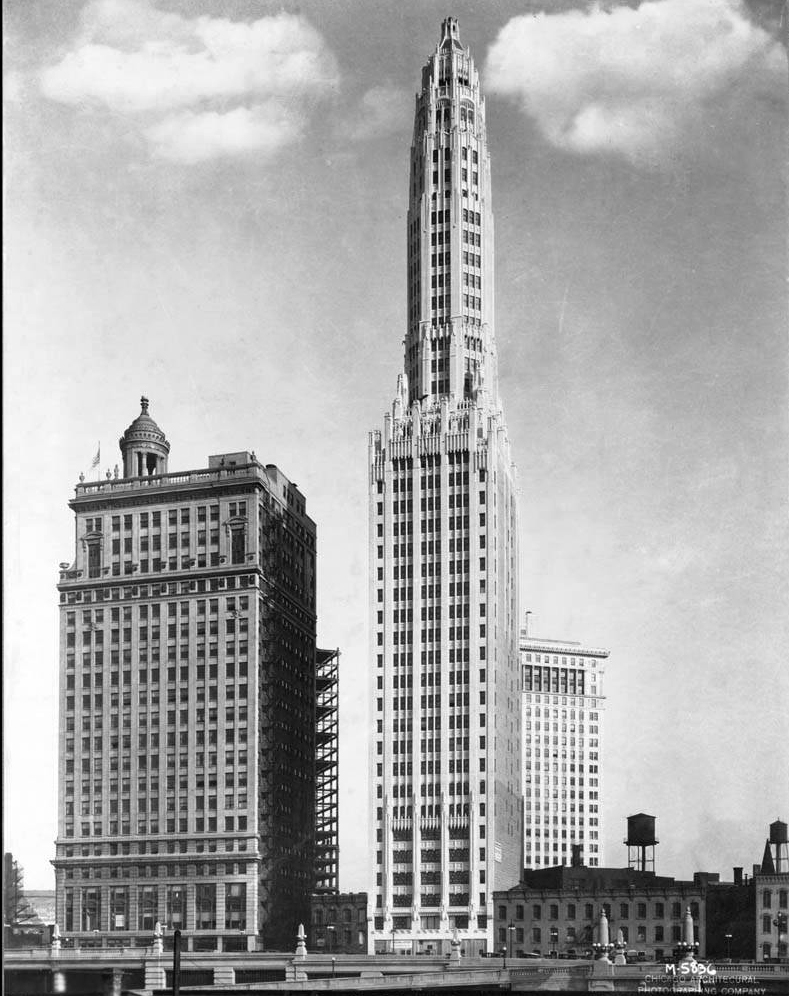 Mather Tower was commissioned in 1926 as a speculative office building, envisioned by developer and businessman Alonzo C. Mather (1848-1930) to be part of a set of twin towers that would make a bold urban statement at the north “entrance” to the Loop. While its twin on Michigan Avenue was never built, Mather Tower became one of about two dozen Chicago skyscrapers of the era that were built partly as the result of the building boom fueled by post World War I expansion. Most of these had large amounts of speculative office space and were designed in accordance with the city’s new zoning code enacted in 1923.

In November 2001 a new 4 story cupola was air-lifted by helicopter from a barge in the river and placed at the top of the building.