William Wrigley, Jr., the founder of the Wrigley Company and builder of the Wrigley Building, was born in 1861 in Philadelphia\ and moved to Chicago in 1891 to start his own business. Wrigley originally sold soap and baking powder, but after the chewing gum he gave away with his products became more popular than the products he was selling, Wrigley began selling the gum instead. Wrigley was known for his genuine enthusiasm for his products, his personal appeal, and his close relationships with vendors. 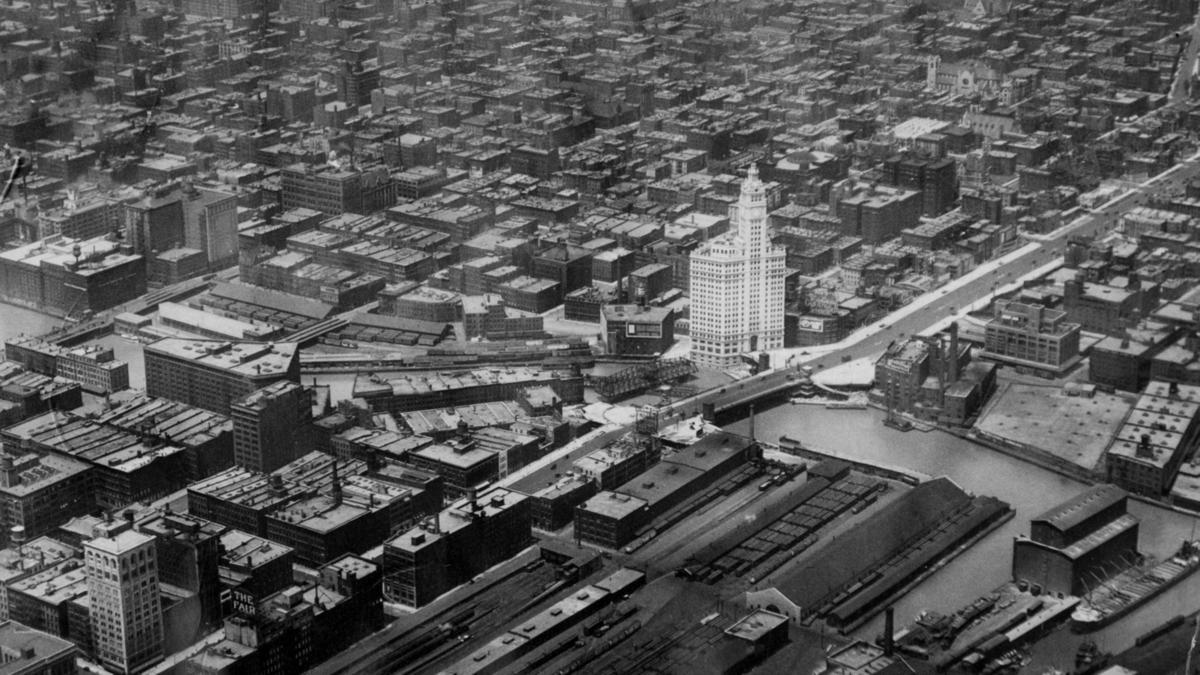 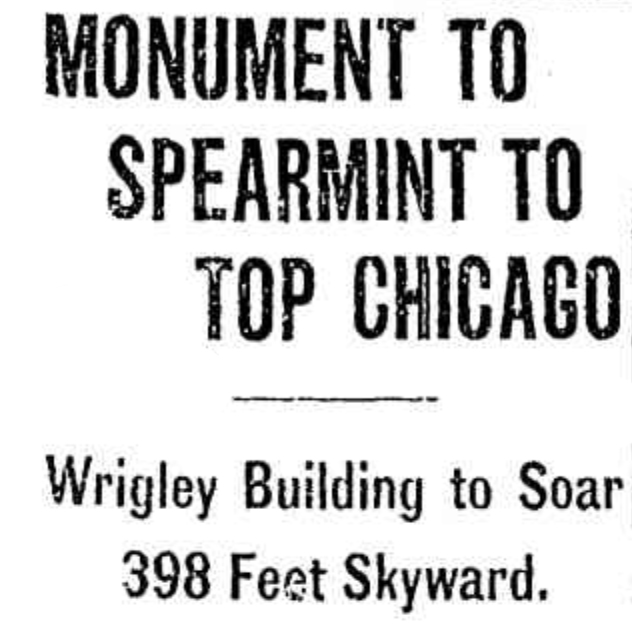 BY AL CHASE
Pretty nearly every one of us have paid our nickels and worked our jaws toward financing what will be Chicago’s tallest building—to loom 398 feet above the plaza at the north end of the new Michigan boulevard bridge. And the strangest feature of this great cloud tickling monument yo spearmint is that, although it will be the most commanding site in the middle west for a wonderful electric display of the virtues of William Wrigley Jr.’s chicle sticks, there won’t be any advertising on the building.

When, one realizes that Mr. Wrigley pays a good fraction of a million dollars annually just to let the mazdas flash the fame of his gum in Times Square passersby in Manhattan, his modesty and restraint in keeping snaky electric advertisements from luring the eye of the beholder in Chicago to his magnificent building is something to command. 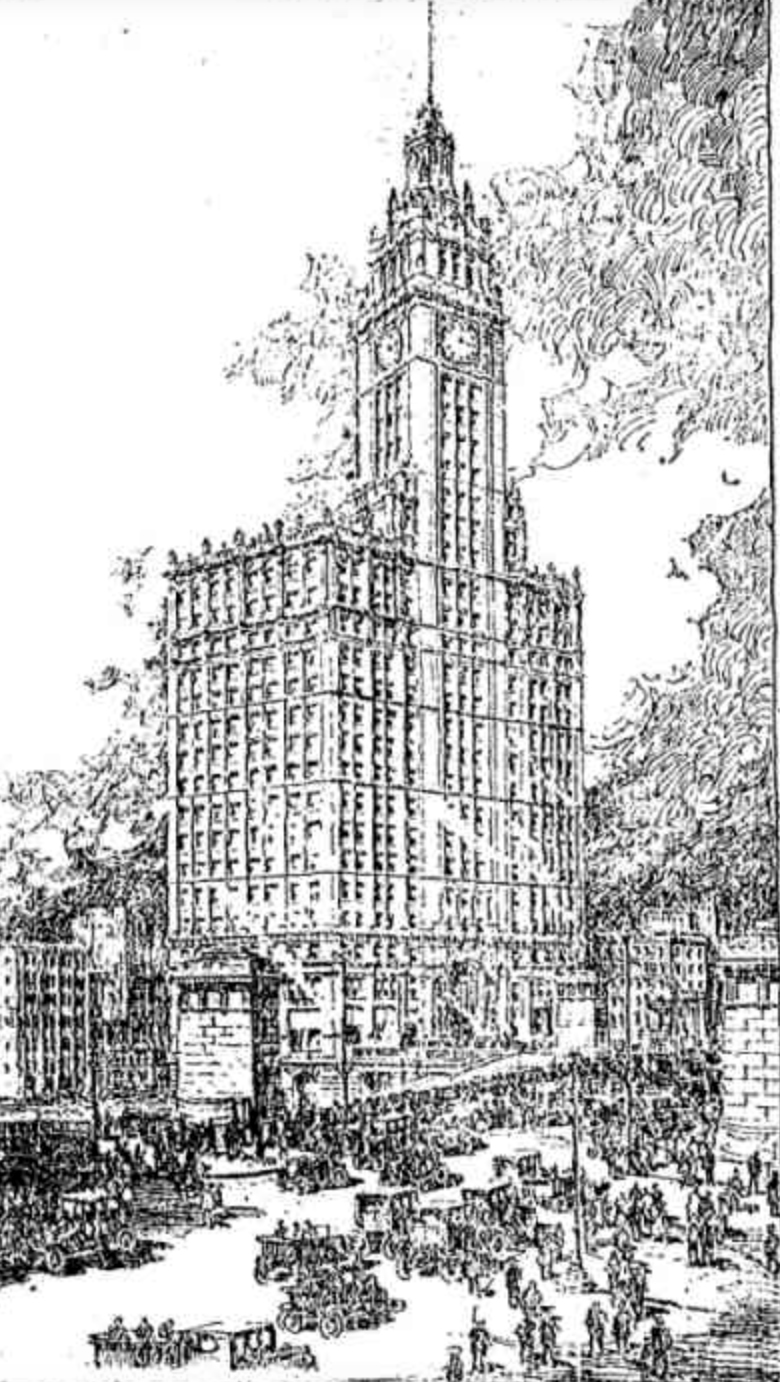 Wrigley—That’s All.
The $3,000,000 structure, which Mr. Wrigley is striving to make the finest office building in the world, will have a simple brass plate at the main entrance on the plaza, with merely the words Wrigley building.

The main part of the Wrigley building will be only 240 feet high, no attempt having been made to change the plans because of the new height limit. It will face 135 feet on the north bridge plaza, 75 feet on the river, 88 feet on Rush street, and 155 feet on North Water street. It will cover cover an area of 11,496 square feet. On top of the sixteen stories will rise a 183 fot tower forty-two feet square. It will have four clock dials each twenty feet in diameter.

The crowning feature of the tower is to be a searchlight lantern nine feet in diameter, to be treated as the principal part of the illuminated effect which will disclose at night the silhouette and architectural forms of the tower design.

All Outside Offices.
All the elevators, stairways, stacks, pipes, and utilities will be in the center of the building, giving space for offices on all four sides of the building. There will also be approximately 1,200 square feet of office space on each floor in the tower.

By a fortunate jog the boulevard link moves far enough eastward as it crosses the river to make the Wrigley building tower appear to the spectator in Michigan avenue south of the river to stand in the middle of the boulevard.

Chicago’s Tallest Building.
Work is now under way on the foundation caissons, and the building is expected to be ready by Jan. 1, 1921. The Wrigley company will then move their general offices from the Kesner building across the river and use three or four floors and part of the tower, the rest of the building, almost 120,000 square feet, to be rented to various concerns. The architects are Graham, Anderson, Probst & White. B. M. Winston & Co. will be the renting agents of the building.

The Wrigley building will be the highest building in Chicago, but will surpass the Tower building, at Michigan and Madison, better known as the Montgomery Ward tower, designed by Richard E. Schmidt, by only three and a half feet, it being 394½ feet to the tip of the weather vane on the Tower building.

ABOVE, RIGHT:Looking north across the river from the plaza at the south end of the new two level Michigan avenue bridge. The slight turn in the bridge to the east makes the new Wrigley building appear to stand directly in the middle of Michigan avenue.

This City Has a 28-Story Building, Heretofore the Tallest Was 21
Built on Land Which Was Once the Property of tire First White Settler

Right across from the site of old Fort Dearborn, standing on land which was once the property of the first white settlers, at the north end of the bridge that links the boulevards of the South with those of the North Side, there has arisen a lofty tower. This tower is the crowning feature of the new Wrigley building. the tallest building in Chicago. In this building the architects. Graham, Anderson. Probst and White of Chicago, have embodied some of the characteristics of the chateaux of France, in ·the period of renaissance which occurred under Francis the First.

Starting at the base with grey stone work. harmonizing in color with the bridge itsel f, the tower springs upward through 400 feet of superb construction. its color growing ever lighter as it nears the apex,-an effect produced by different tones of tile. shading from grey to creamy white. The result is as if the sun were always shining on its upper reaches. To heighten the effect the lantern and finial at the very top have been covered with gold-leaf. which will be forever proof against the atmosphere.

From the ground to the top of the building there are thirty tiers of architecture, including the lantern and the colonnade. From the observation platform, which is twenty-eight stories in the air, may be had the best obtainable view of Chicago and its harbor short of taking an aeroplane. The clocks on the four sides of the tower are twenty-six feet across the dial. The lantern at the tip of the tower wilI carry a revolving beacon light, visible for miles out on Lake Michigan and from all quarters of the city.

Not the least beautiful aspect of the building is obtained from the vantage point of Michigan Boulevard at a distance of about a mile, where, advancing past the Monoroc Building. the University Club, and the Tower Building, one becomes suddenly conscious of the new presence between the walls of the buildings abutting on the river. From there one can see the tower in all the airy grace of its many pinnacles and turrets, much as one might glimpse the towers of some distant castle set on a rock long before he has seen its base.

Perhaps the most impressive view of all is that obtained from the surface of the river, west of Rush street. where the three stories which are below the street level are visible. and the whole vast pile seem enhanced in height by its quivering reflection in the rIver. 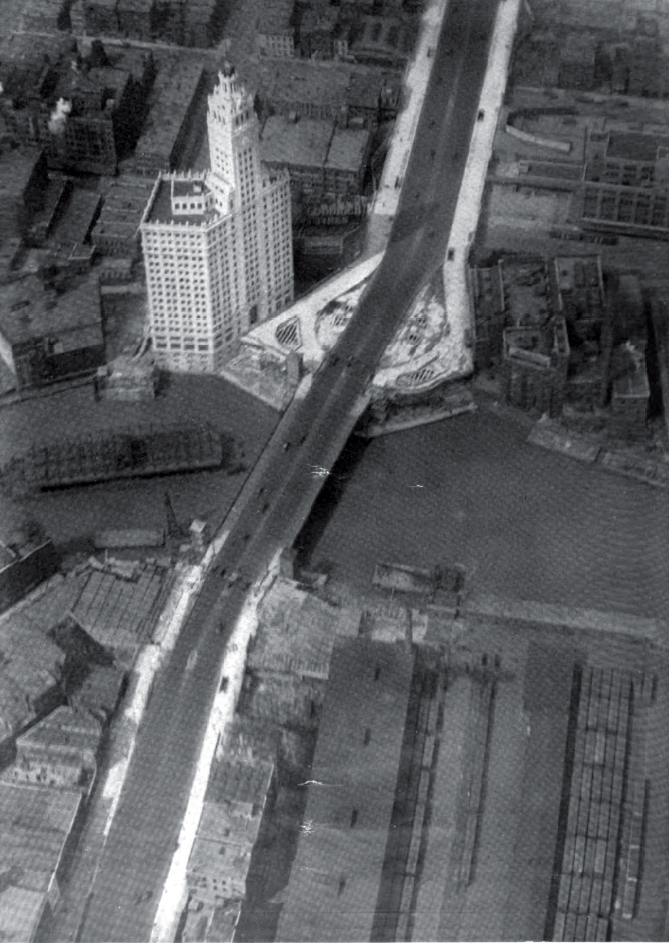 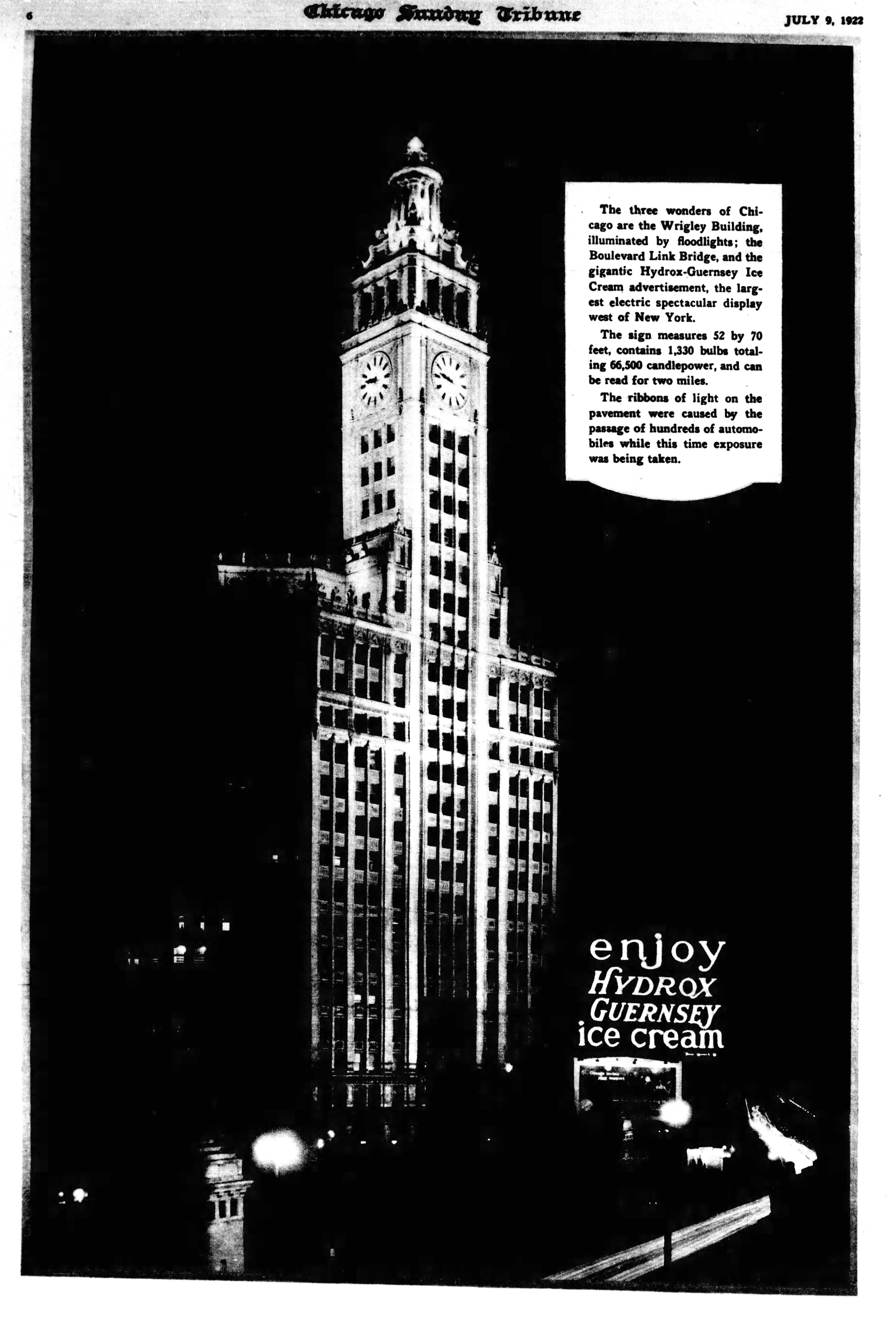 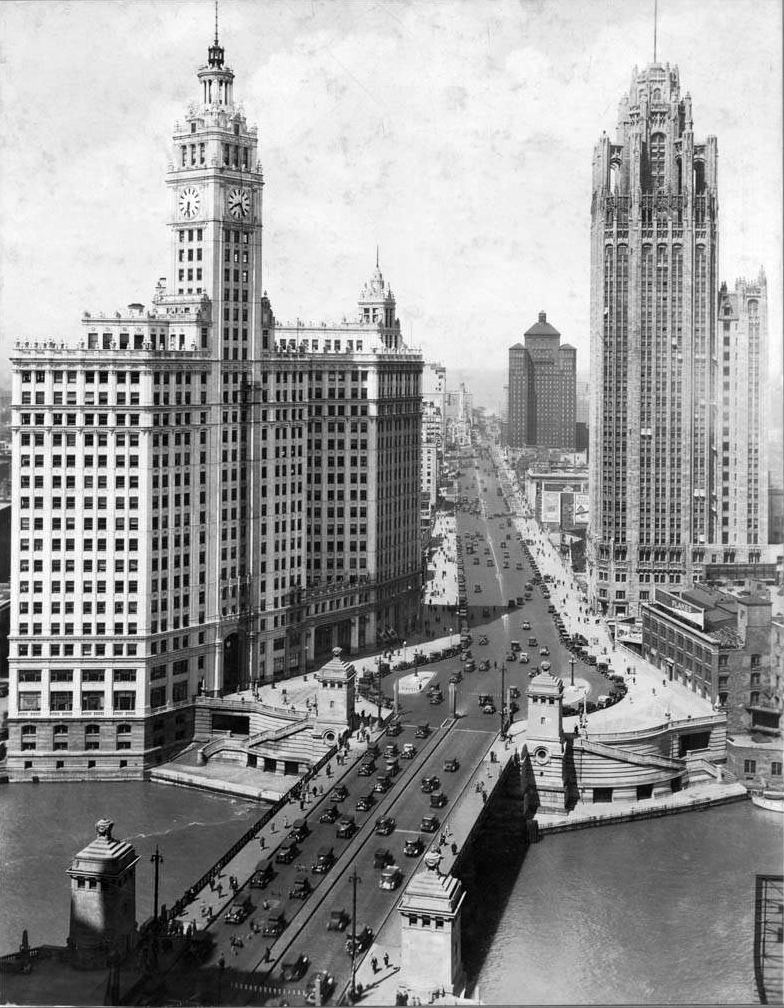 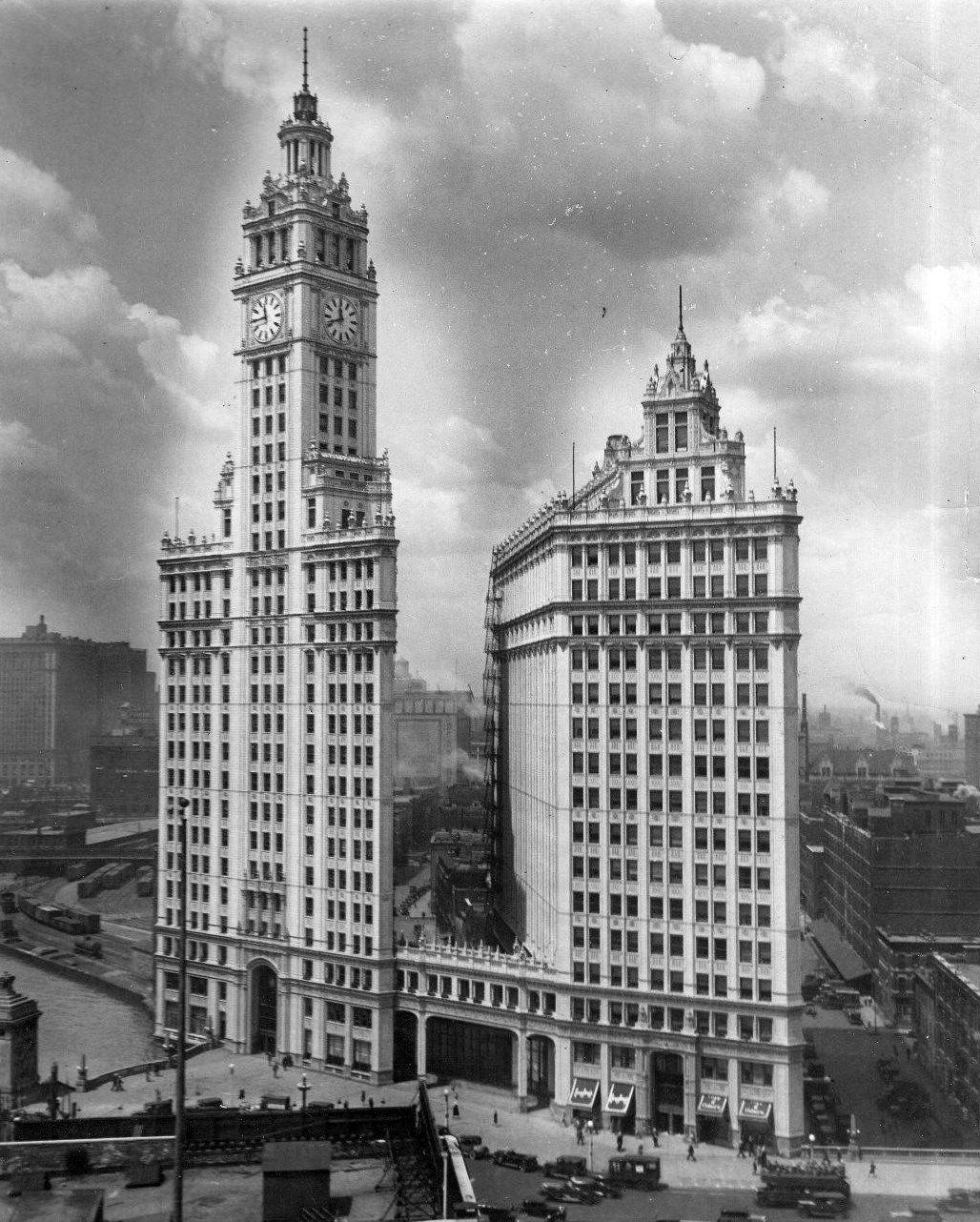 Looking west across Michigan Ave at the Wrigley Building
1929 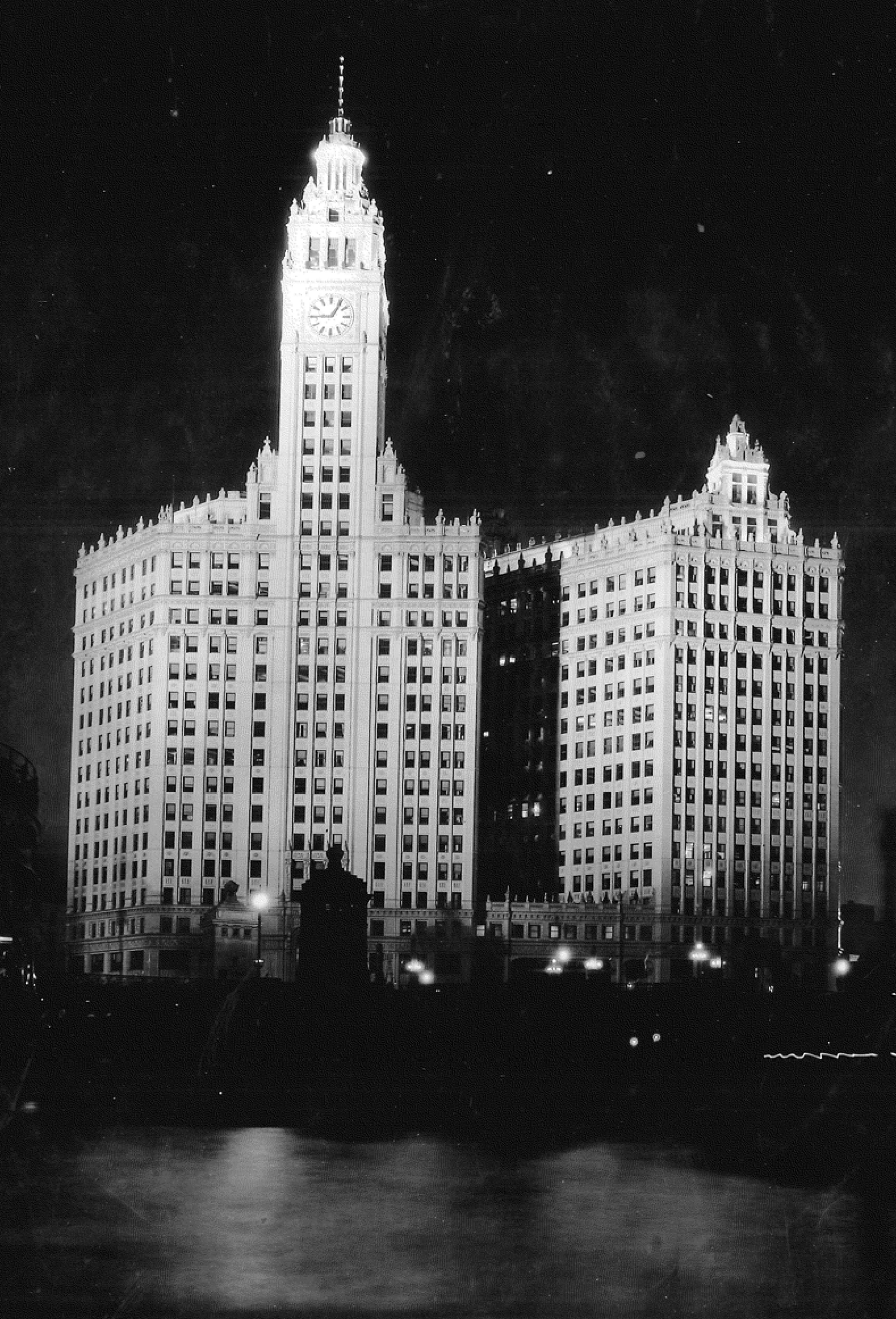 Will Play Violin All Way Up Wrigley Stairs and Back

Miss Olive Belle Hamon, 17 year old daughter of the late Jake Hamon, Oklahoma oil millionaire, and heiress to his vast estate, will give a violin recital this afternoon at 2 o’clock for the benefit of the Camp Algonquin fund. Miss Hamon will play her specially made violin continuously while climbing the stairway to the top floor of the Wrigley building and descending to the street. 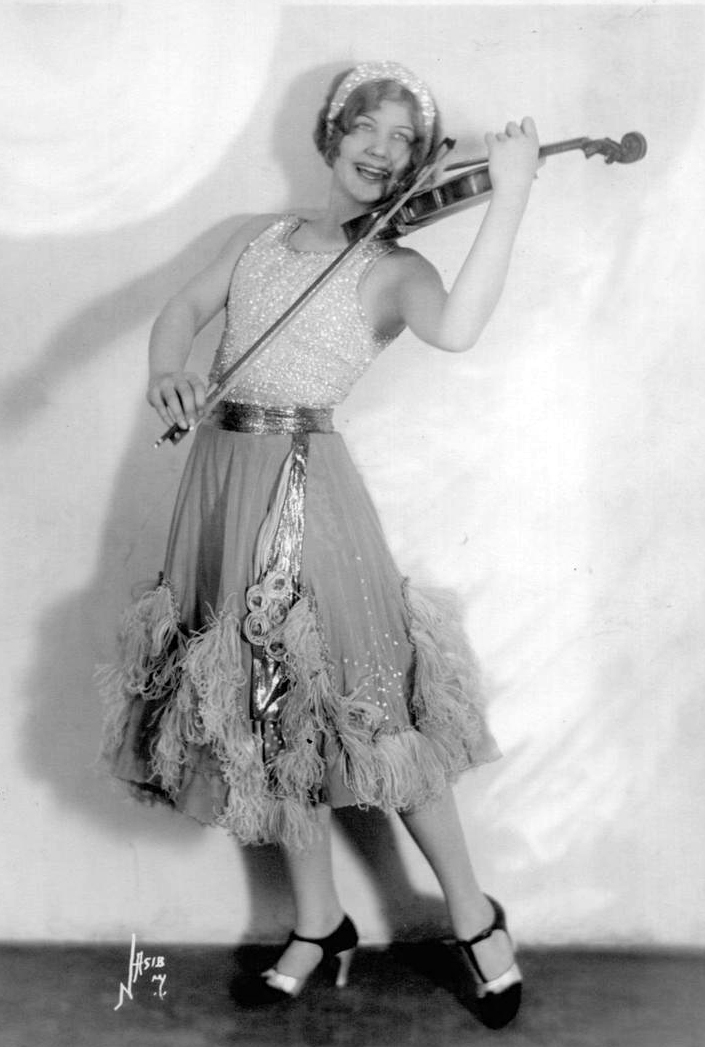 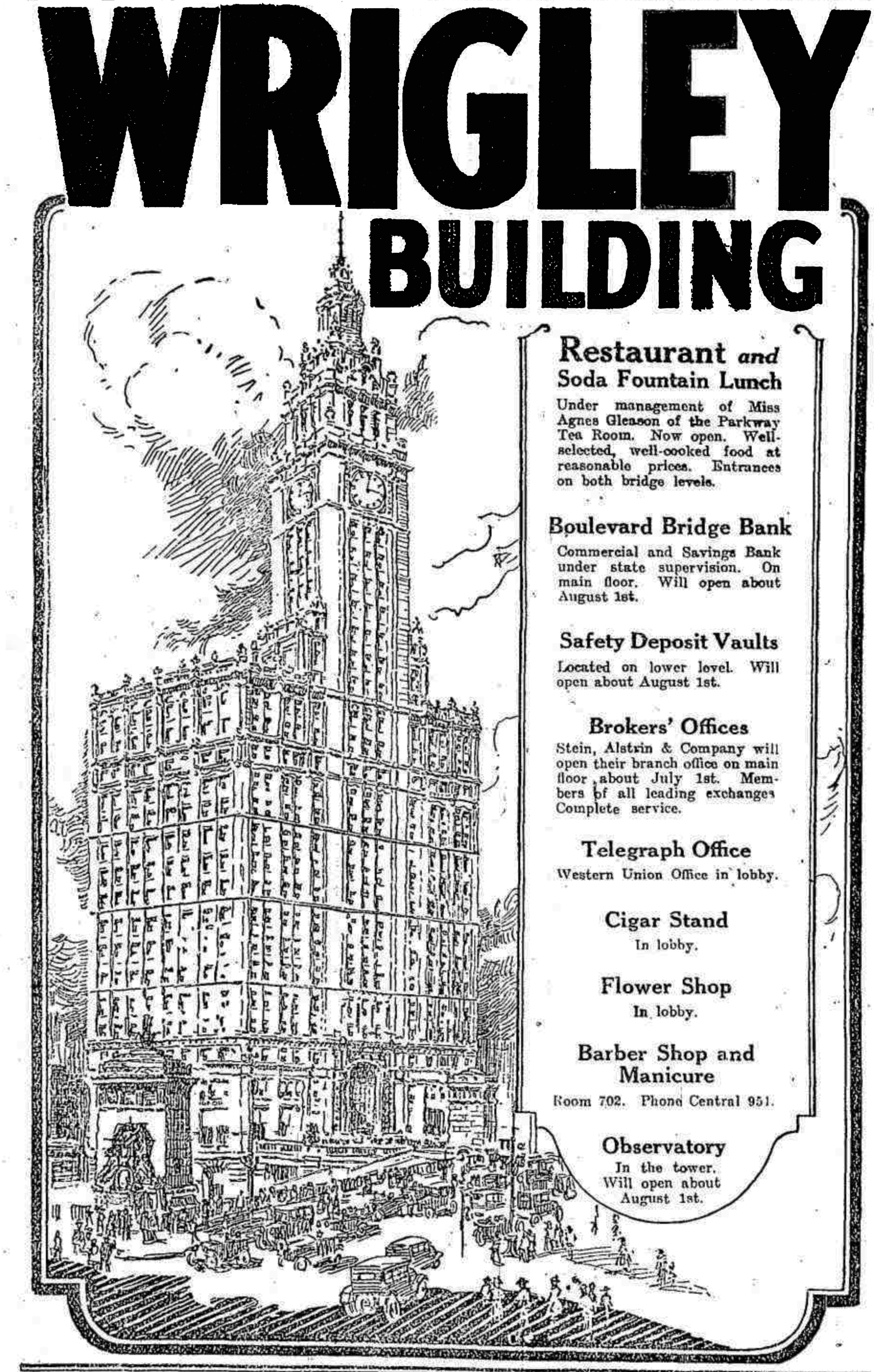 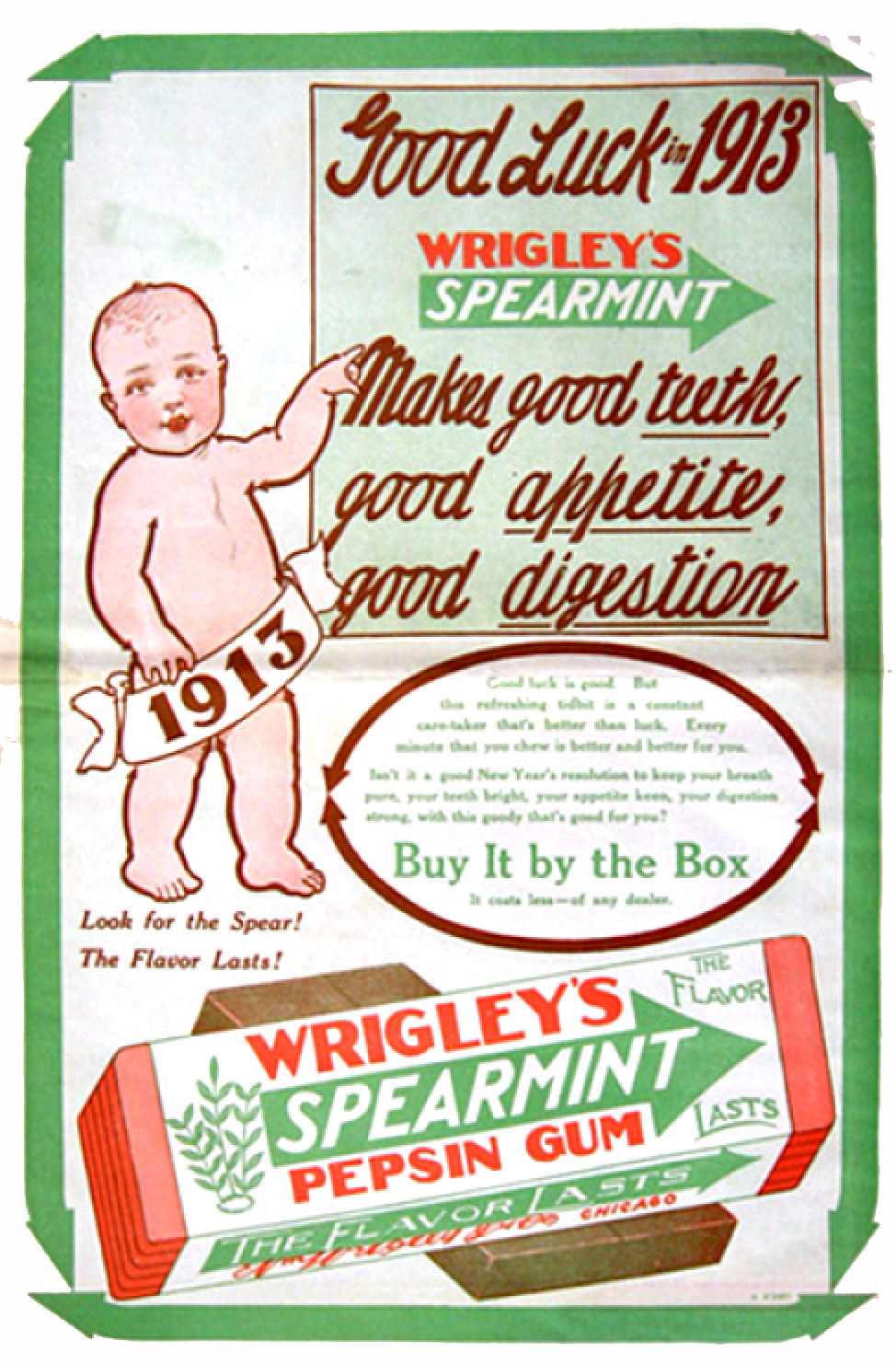 The William Wrigley Jr. Company was founded in 1911, when Wrigley merged his distribution company with the Zeno Manufacturing Company, which produced his chewing gum.

Chicago’s iconic Wrigley Building, known for its soaring clock tower and festive walls of white terra cotta, has been home to the Wm. Wrigley Jr. Co. for nearly a hundred years. On Thursday, the company announced that it is preparing to leave the building that bears its name. By the end of 2012, Wrigley will move the 250 employees remaining at 410 N. Michigan Ave. to the Goose Island campus it began building in 2001.