This was the site of the Wabash Ice Skating Rink, which was one the first indoor ice skating rinks in the country.

NEW HOTELS.
Messrs. Walker and Hill, proprietors of the former Matteson House, are preparing to build the new Matteson House, on ground belonging to Mr. M.O. Walker, on the northeast corner of Jackson street and Wabash avenue. We mentioned, some days ago, that Mr. B.F. Gardner had leased the southwest corner of Jackson and Michigan avenue for the purpose of building a hotel there. The locations of the buildings show that many classes of businesses have been pushed permanently southward as well as westward by the fire. Except the Sherman House, which the proprietors propose to rebuild on the old site, all the hotels will be south of Monroe street. The Ogden House will probably be rebuilt, and Mr. Potter’s splendid hotel on the southeast corner of State and Monroe is being pushed forward rapidly as possible.

Matteson House.
The Matteson House, on the northeast corner of Wabash avenue and Jackson street, is a handsome building, as superior to its Randolph street predecessor as the New Chicago to the old city. It is 100×170 feet, five stories and basement in height, of cut stone, and will cost about $200,000. It will be completed in the early spring. The arrangements for the office and other necessities on the main floor are on the most approved modern style, aglass dome in the roof pouring all the necessary light this important attachment to an hotel.

The doors of the new Matteson House are open. 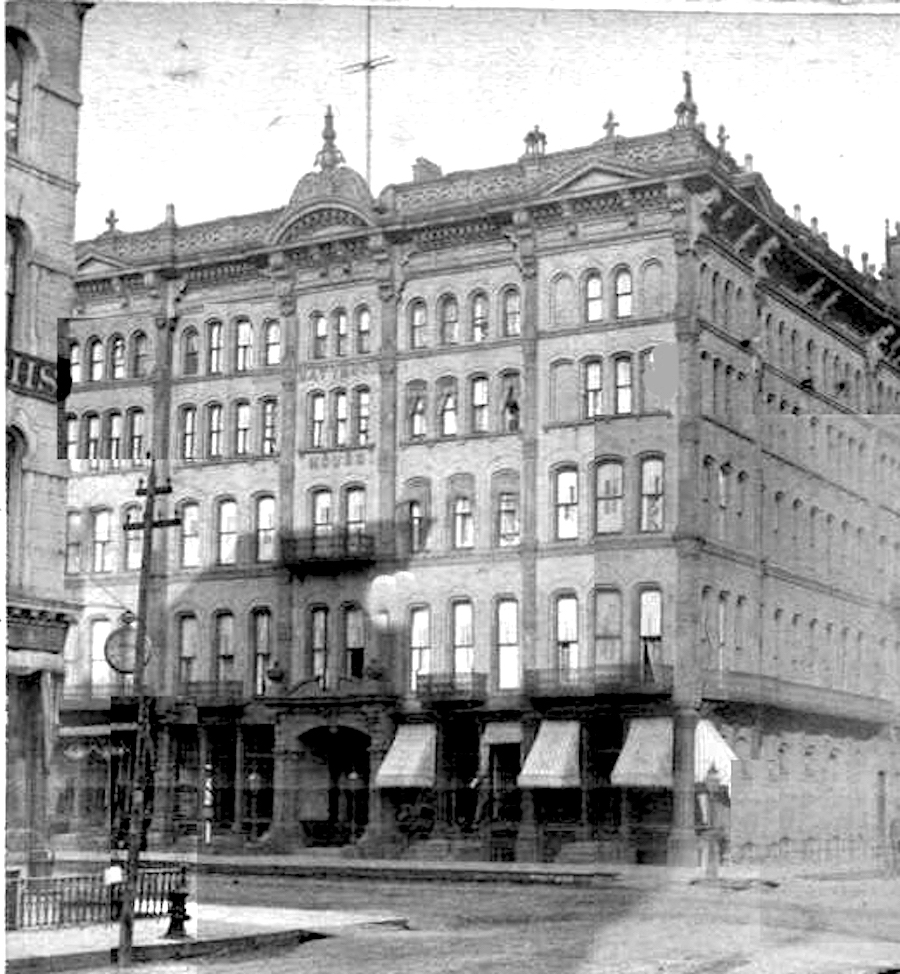 The old Matteson House, corner of Wabash avenue and Jackson street, which for the past six months has been undergoing a thorough remodeling, has laid aside everything old but its name and location. A new story has been added. increasing its capacity to over 300 rooms, and the imposing appearance of the house is much enhanced by the new mansard roof. The reconstruction and remodeling have been accomplished under the personal supervision of Charles Busby, the well-known builder and contractor of this city, and reflects great credit upon his skill, since it was almost a more difficult work to perform than that of erecting a new building. The work has been executed specially with a view to obtaining the greatest amount of light and ventilation, and these have been secured in a prominent degree. The system of sewage is absolutely perfect, and is divided into three sections as separate and distinct as if pertaining to different buildings, each having its own outlet to the street-mains. Every trap and closet in the house has full ventilation to the roof. An expenditure of $225,000 has been incured in the refitting and refurnishing the house.

The management of the New Matteson is assumed by the well-known and, popular hotelmen the Messrs. Munger Bros., formerly of the Clifton House in this city, whose long experience of twenty-eight years in the business (the last ten of which were spent in Chicago), eminently fir them for the conduct of an establishment which may safely be classed as one of the model hotels of the West.

Opening on Aug. 1, under such favorable auspices and at the lowest rates possible for such accommodations as it supplies, the success of the new Matteson is assured from the start.

The Steam Heating apparatus was furnished by Woodman & Warner. The system adopted is by direct radiation. Steam is supplied by two large boilers of ninety horse-power. In connection with these boilers are several large mains which supply a full pressure of steam to the several coils and radiators at a low pressure. The elevator, which has also been rebuilt, is running at the same low pressure of the steam. 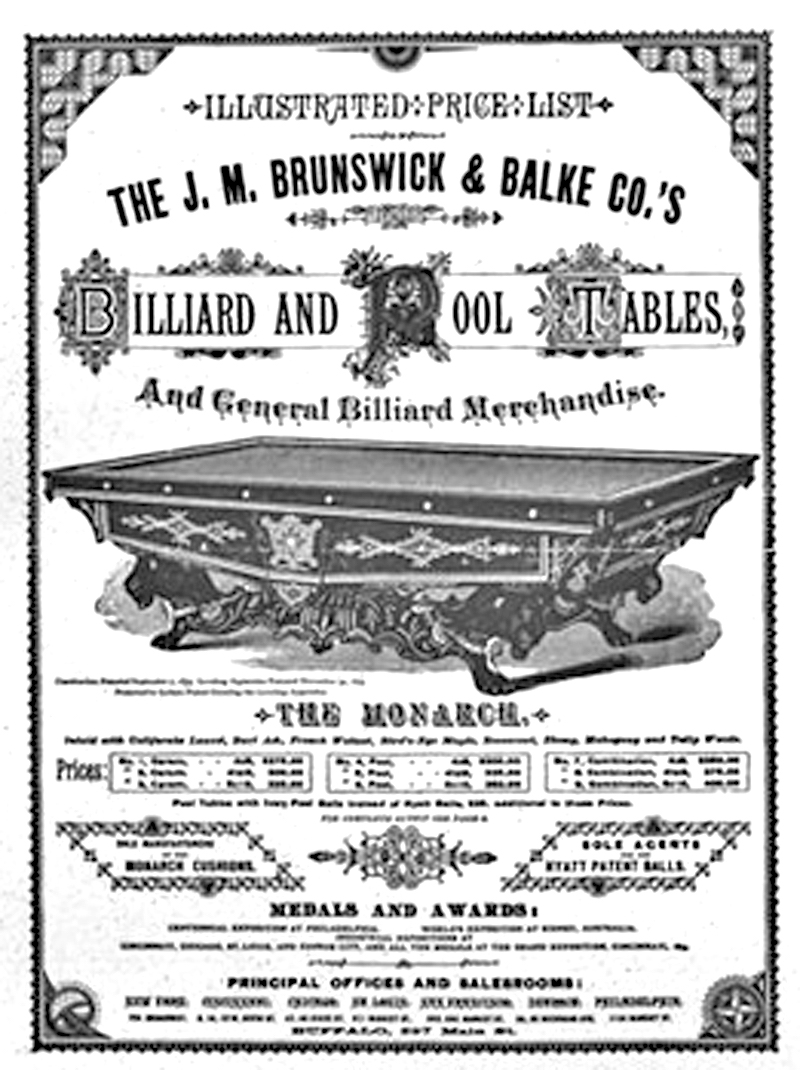 The Engine was manufactured by Warren Springer, of Chicago. It is very strong and substantial in construction and handsomely finished, and has been pronounced by experts to be the finest slide-valve engine in the country. It has many points of merit which will commend it to users of electric-light in particular, being especially designed and constructed for this purpose.

The Billiard-Room is an attractive feature of the hotel, and is handsomely fitted up. It is furnished with four of J. M. Brunswick & Balke Co.’s celebrated Monarch cushions, for both of which they hold patents. The Brunswick & Balke Co. are considered the most extensive manufacturers of billiard and pool tables in the world, and their reputation is world-wide.

The Cigar Department presided over by H. W. Gustine, who has been for the last five years identified with the Matteson, furnishes to the guests of the house the choicest brands of the fragrant havanas.

Carpets, Etc.
Worthy of special mention as forming so important a part in the furnishing of the new Matteson, are the carpets, all of which were furnished by the well-known firm of C. W. & . Pardridge & Co., 114 and 116 State street. The best material and latest designs have been chosen. The main halls are covered with Axminster carpets, and in all the halls the carpets are laid in rugs, thus displaying the marble floor. The upper halls are carpeted withe best heavy Brussels, and the finest body Brussels, moquettes, and velvets.

The Silverware.
The silver and plated ware, comprising some of the most elegant designs, was furnished to the Matteson House from the rich stock of the well-known firm of Giles Bros. & Co., manufacturing and wholesale jewelers, corner of State and Washington streets. The elegant regulator timepiece in the office was also obtained from the same firm.

China and Tableware.
That everything might be in keeping with the elegant surroundings, the best houses have been drawn on for supplies, and the American china tableware, decorated pitchers, glassware, and the bar glassware, were furnished by the firm of Burley & Tyrrell, 83 and 85 State street, who make a specialty of a superior line of hotel furnishings in tableware.

Wanted—A Name for a Hotel.
Said a longer: I suppose you heard that the old Matteson House had been leased by Mr. Gage, late of the Richelieu. Of course there are others interested with him. The lessees are now holding night sessions for the purpose of finding a suitable name for the house. Some of Mr. Gage’s associates suggested “The Gage,” but Mr. Gage objected. He said:

My modesty would not permit it. Again, the name would kill the hotel. It would be known all over the country as ‘The Green Gage.’

Then the members of the committee—the lessees—suggested that a classical dictionary be procured. A whole catalogue of ancient names was gotten out and voted upon, but no agrrement was reached.

“We must have something,” said one, “that will lay ‘Richelieu’ and ‘The Auditorium’ in the shade. The name must be a high roller, so to speak.”

And at last the accounts the lessees were balloting that name.

AN ATTRACTIVE HOTEL.
Luxurious Equipment of the Wellington Hotel—Elaborate Apartments.
Favored in its illustrious name, in convenience of situation, in elegance of appointment, the Wellington, one of the finest hotels to be found in Chicago, yesterday opened its hospitable doors for business. Many a casual passer was attracted inside by the air of unusual activity on the northeast corner of Wabash avenue and Jackson street, and no one could fail of surprise and delight at the really marvelous transformation which has produced attractive a place.

Yesterday was a general reception day and many visitors inspected the beautiful house from the upper floor to the basement. If any one thing may be said to catch the eye and attention of the visitor more than another it is the “comfort” has been a first and a last consideration. This appears in little things—in wire nets at each window in the house, in luxurious beds, and actually in a pretty pin-cushion on each dressing case. No more hunting around on the floor for a stray pin; the Wellington is prepared in that respect. Tasteful, and even elaborate, pictures adorn the walls of every room in the house, a most pleasing novelty in a hotel.

But these little details are simply evidences of the minute care which characterizes every appointment of the house. The decorations are particularly elaborate, great care being taken in the combination of colors to produce a most harmonious effect. A particularly noteworthy feature of the Wellington is its acceptability for a really comfortable home life. The rooms are now so arranged that there are none dark in the house, and several of them can be thrown together, making a most delightful apartment. The corner suites on Wabash avenue and Jackson street are particularly attractive.

On the parlor floor, besides the large foyer and parlors, is found the bridal chamber, a suite of perfectly appointed rooms of great elegance. There are also on this floor a series of cosy little private dining rooms, five of them being so arranged that they may by opening large doors be made into one large banquet room.

Ladies and Gentlemen’s Restaurant.
On the ground floor, besides the office and rotunda, there is, on either side of the main entrance, a handsome cafe, one exclusively for ladies and gentlemen. The latter opens from the ladies’ entrance on Jackson street as well as from the rotunda and from the hall at the main entrance. Both these cafes are perfect in their kind, and are certain to please. The other accessories of the place are fitted up in an extreme of luxuriousness, the bar, the barber shop and billiard rooms being very handsome.

It is sufficient to say of the management that it is to be that of Mr. A. S. Gage and Mr. Charles C. Hilton, Colonel H. A. Wheeler being associated with them. Mr. Gage is well known here in business circles, and as a former partner in the Hotel Richelieu. Mr. Hilton has been a popular hotel man for a score of years in Chicago, having been a proprietor of the Tremont House, and at various times connected with other leading hotels in Chicago.

The carpets, draperies, and bedding for the Wellington were supplied by the Chicago Carpet Company, and they are of the place in other respects, as well as to sustain the high reputation of the concern which supplies them. Nothing cheaper than body Brussels carpets is used, and the quality also includes the finest Wilton’s and Moquettes. At every window are handsome lace curtains. The carpets were a special order, some of them made abroad for this hotel. 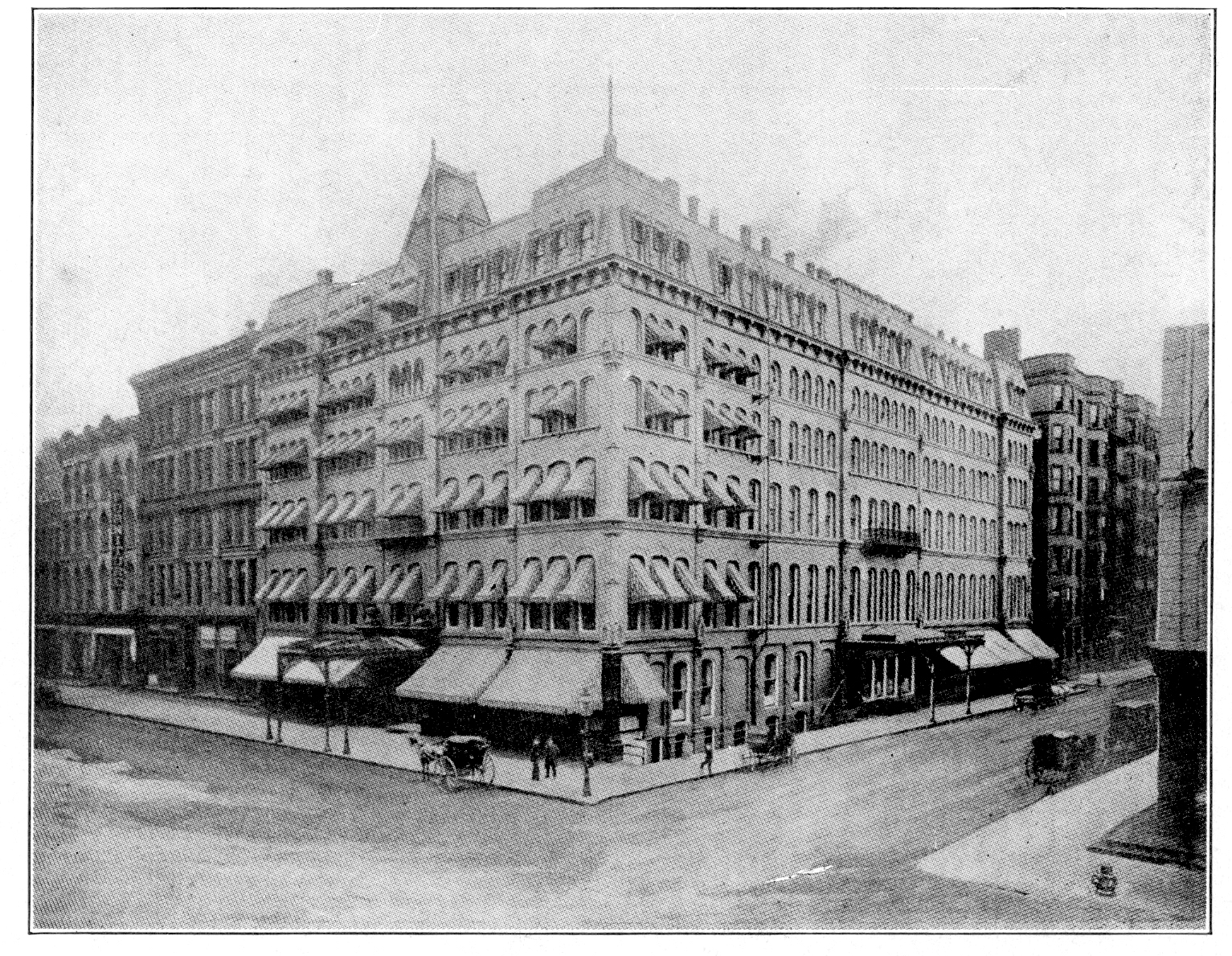 A procession of men and women lugging suitcases and handbags filed out of the Wellington hotel last night. One by one the cut glass chandeliers were darkened. A solitary light served a clerk who was bending over a column of figures and threw gloomy shadows over the marble paneled walls.

In the buffet the dusty hangings that once were scarlet and the carved, golden ceiling looked down on four gray haired men whose clothes suggested better days. They, too, poured out a final “shot” from a whiskey decanter and stole away. T. C. Capen, the manager of the hotel, appeared with hammer and nails and boarded up the entrance.

It was the last day of the hotel, which once was one of the most exclusive in Chicago. It will be torn down to make way for the new Lyon & Healy building.

C. H. Hill erected the building two years after the great fire, and called the Matteson house. In 1891 Albert S. Gage took it over and spent more than $150,000 in reconstructing it. It was then named the Wellington. Governors, senators, railroad presidents, judges, board of trade operators, and the best actors made it their headquarters. 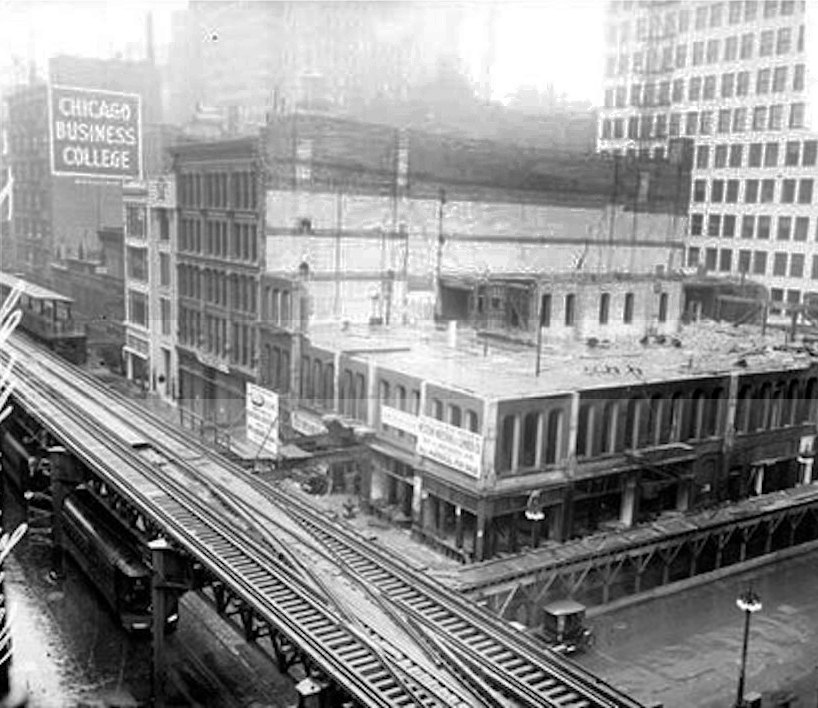 Demolition of the Wellington Hotel
May 22, 1915 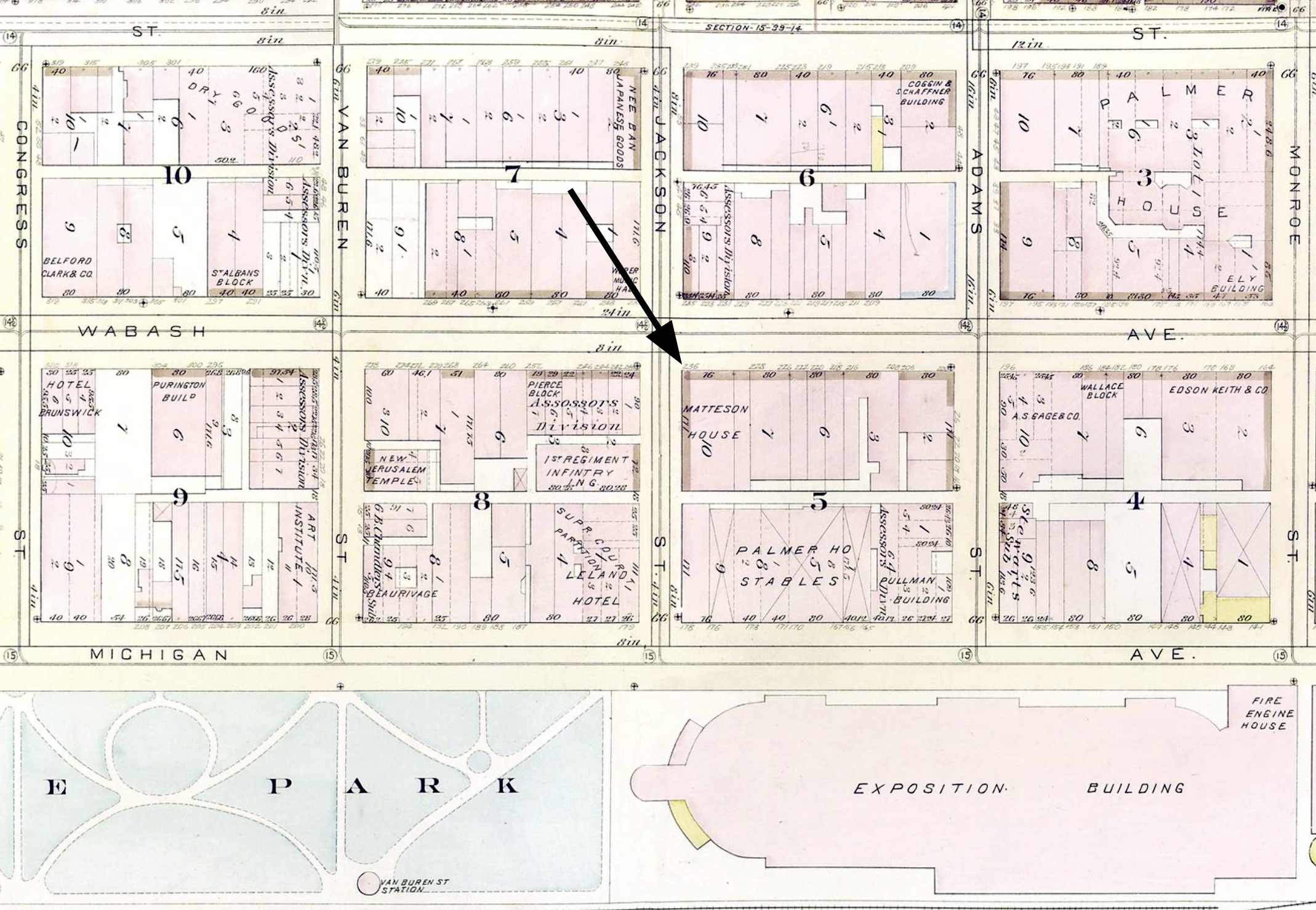 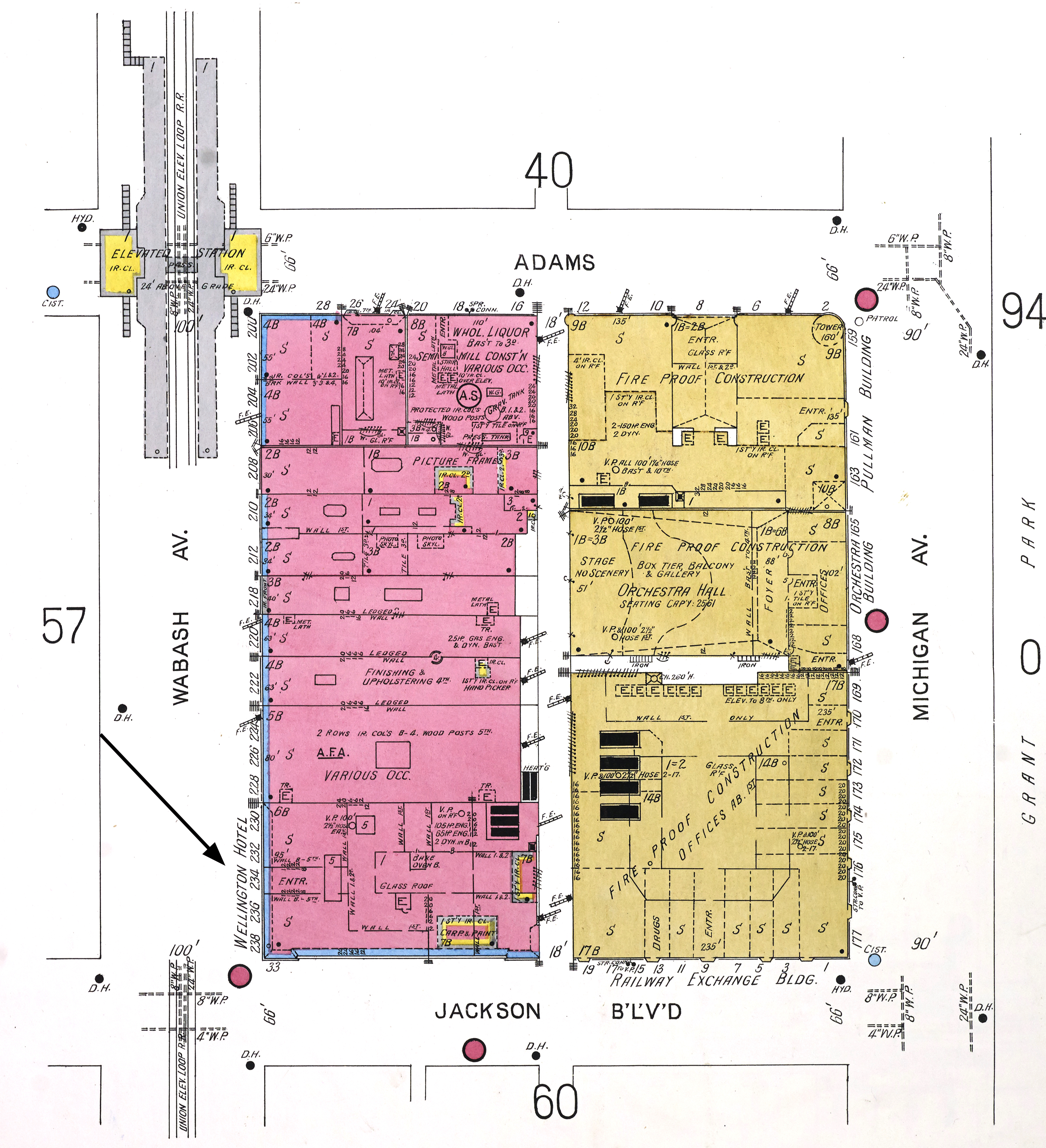