GILES BROTHERS & CO., the well-known jewelers, are still increasing their business in both the wholesale and retail departments, and supply the jewelry trade from the Alleghanies to the Pacific. The three medals for superiority in watches, awarded by the greatest exposition for railway appliances ever held anywhere, were won by Giles, Bro. & Co., and it is an indisputable fact that no house in the world surpasses theirs In this respect These three medals are represented here, and they constitute, without a doubt, the highest honors that a watchmaker can obtain. They have added

A NEW INDUSTRY
to the manufacturing interests of Chicago in the shape of a diamond-cutting department They certainly deserve great credit for their enterprise. This is the only establishment of the kind in the West, and has been seldom attempted outside of the old hereditary diamond-cutting establishments of Amsterdam. They import their rough diamonds free of duty, and by using the best labor-saving machinery, are able to offer their patrons the benefit of first cost prices. Giles Brothers & Co. employ over 100 hands, and their stock runs up into the millions.

From Chicago and Its Resources, Twenty Years After the Fire, 1891

Charles K. Giles. Mr. C. K. Giles, of the wholesale and retail firm of Giles, Bro. & Co., jewelers, was born in Massarhusetts in 1839. He received an academic education at the New Salem (Mass.) Academy, In 1861 he removed to Chicago, and entered upon the course of business with which his name has since been connected. It was by Mr. Giles’ business enterprise that diamond cutting was introduced in the West. He has also introduced some valuable improvements in watches, one of the most noted of which was the antimagnetic shield, by which watches in the pockets of their owners are completely insulated from the influence of magnetic currents while in close proximity to electric light and power dynamos. Many a valuable watch was ruined by the works being magnetized by the owner approaching to near these machines, before Mr. Giles patented and introduced his antimagnetic shield. The firm of Giles, Bro. & Co., of which Mr, C.K, Giles is the head, is one of the oldest, most substantial and best known in the West, and fully deserves the distinction it has won. 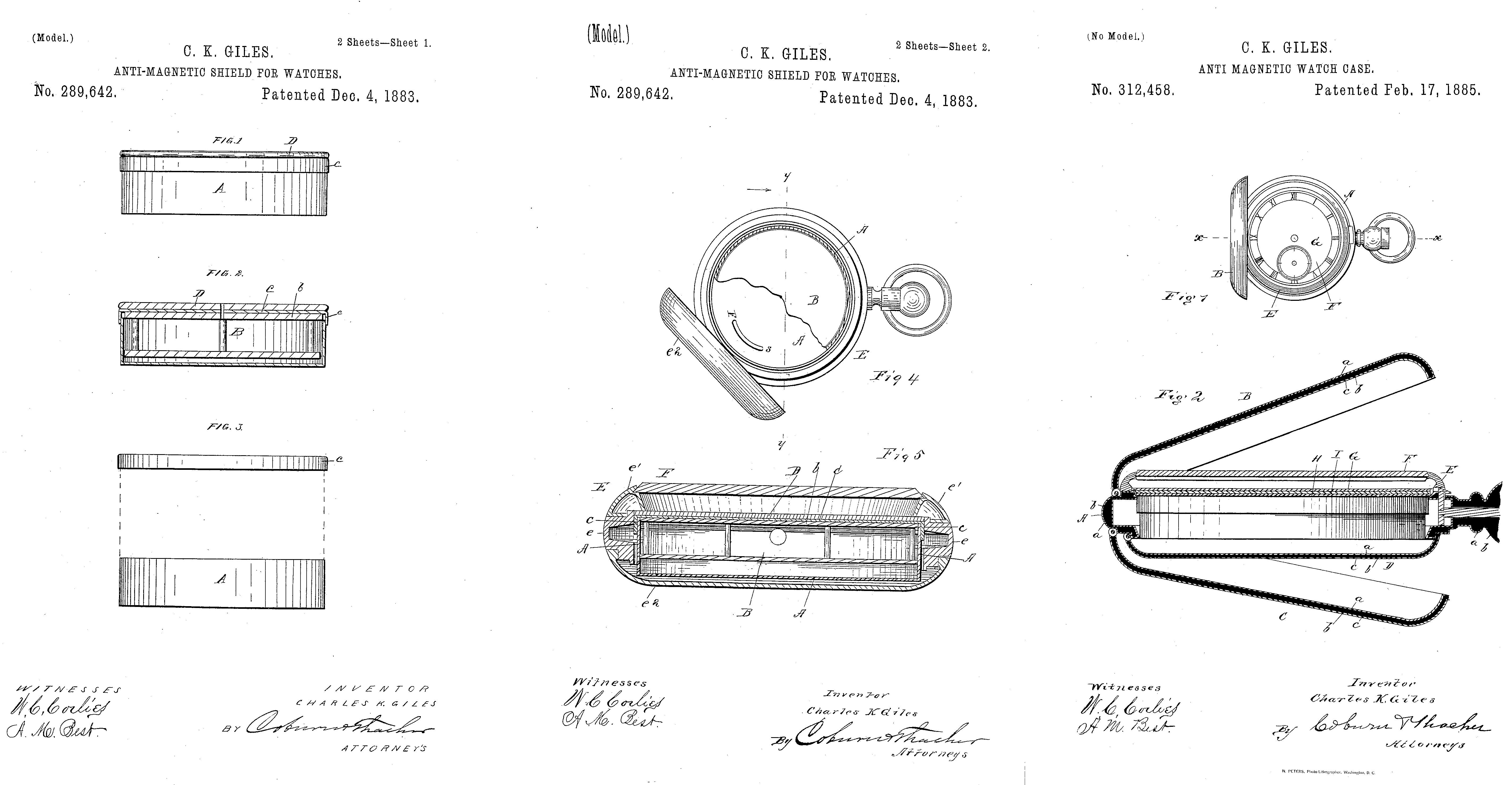 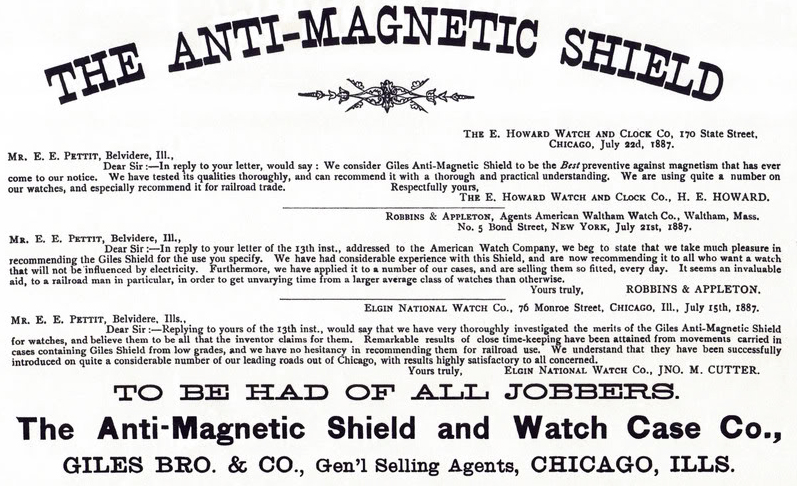 Mr. Editor: —We notice in the December number of your Journal, an article headed “Anti- Magnetic Watches” in which the writer takes occasion to very vigorously puff a certain “Geneva” watch, and very viciously attack the Giles Anti-Magnetic Shield, and the very viciousness of the attack, and the ignoring of the facts and truth of the matter, as far as the shield is concerned, makes the object and animus of it, plainly visible, and in all fair minded judgement, will only serve to defeat the very point he is trying to make. He lays great stress on the fact that the shielded watch will stop when placed on a dynamo, and the other one does not; this proves nothing. If he will come into our office , we will show him that a “Geneva” Non-Magnetic watch stops on a ten inch magnet, and that the Giles shielded watch is not affected in the same position, so according to his reasoning the Geneva watch is worthless, and a swindle, and the shielded watch is the only thing for a railroad man to buy. The fact that a watch will run on a dynamo is a very small point. We can show many watches that will not be affected by the dynamo, the “Waterbury,” for instance. It is a very easy matter to make a non-magnetic watch, and they are made every day, of the cheapest kind. The old English lever, with gold balance, and brass scrape wheel, is non-magnetic; but all the old non-magnetic methods have been abandoned, or put only in low priced watches, because a permanently satisfactory rate could not be obtained from them.

Now. as regards the Giles shield, toward which the writer of the article named, displays such a bitter prejudice, we have the most positive and practical proof, that it is all that is claimed for it. We have no less authority than the Waltham Watch Company, Elgin National Watch Company Howard Watch Company, and other companies, whose circulars are here-with given. Also from C. J. Field, Chief Engineer of the Edison Construction Works, New York, C. J, Vande Poele, the great dynamo builder of Chicago, and thousands of others in the electric light and power business, also thousands of railroad men; as a matter of fact, the best possible time is obtained by dynamo engineers from shielded watches, and the entire line of proof is most practical and positive, as it has been obtained by three or four years actual use. The shield is made for pocket use, and is fully warranted to protect the watch from all magnetic influences it would be subjected to in ordinary use, and is gauranteed for the use it is made for, as any commercial article should be, and the warrant so reads. The watch is not intended to be laid on the dynamo, neither was the Giles shield intended to be laid on the dynamo, and the warrant and directions so state. It is easy enough to make them to withstand the dynamo, if desired, or if there was a demand for them, but the proof as above, shows that the shield is strong enough, and perfect for practical use. It is but child’s play to “monkey” with a watch on a dynamo, it is only done as an advertising scheme. The finest watches made, the “Jurgensen” and “Frodham,” can be very easily stopped or ruined, by being “monkeyed” with by inexperienced hands, and still it would be no fault of the watch. We are willing to submit the shield to any practical test in actual usage, and it has been so tested by scientific men, and found as represented. As the result of actual usage on railway, we quote the rate obtained from watches carried by employes on the “Pan-Handle” as shown by the record at the end of third quarter “47 watches, average running 57 days, average venation less than ½ second per day.” On the Wabash road at the end of the first quarter, where the watches are new and regulation incomplete, it shows “300 watches, average running 23 days, average veriation less than 1 second per day.” At the end of the third quarter the rate will be down to second per day, without doubt, this very close rating could not be obtained without the aid and protection of the shield.

Trusting we have been able to give some of your unprejudiced readers a clearer view of the shield matter, we remain,