One of the most substantial and imposing buildings that has been erected on Wabash avenue since the fire, is that of the northeast corner of Wabash avenue and Van Buren street, by A. J. Averill, Esq., one of our oldest, best known, and successful and estate men, an illustration of which appears in this paper. This block is 106 feet front on the avenue, by 100 feet on Van Buren street, four stories in height, built of red brick, with ornamental stone cappings and heavy galvanized iron cornice. It is well and thoroughly constructed, and presents a very imposing and attractive appearance. Its cost was $80,000. Commenced in November following the fire, it is now ready for occupancy, having been entirely construed in less than four months. 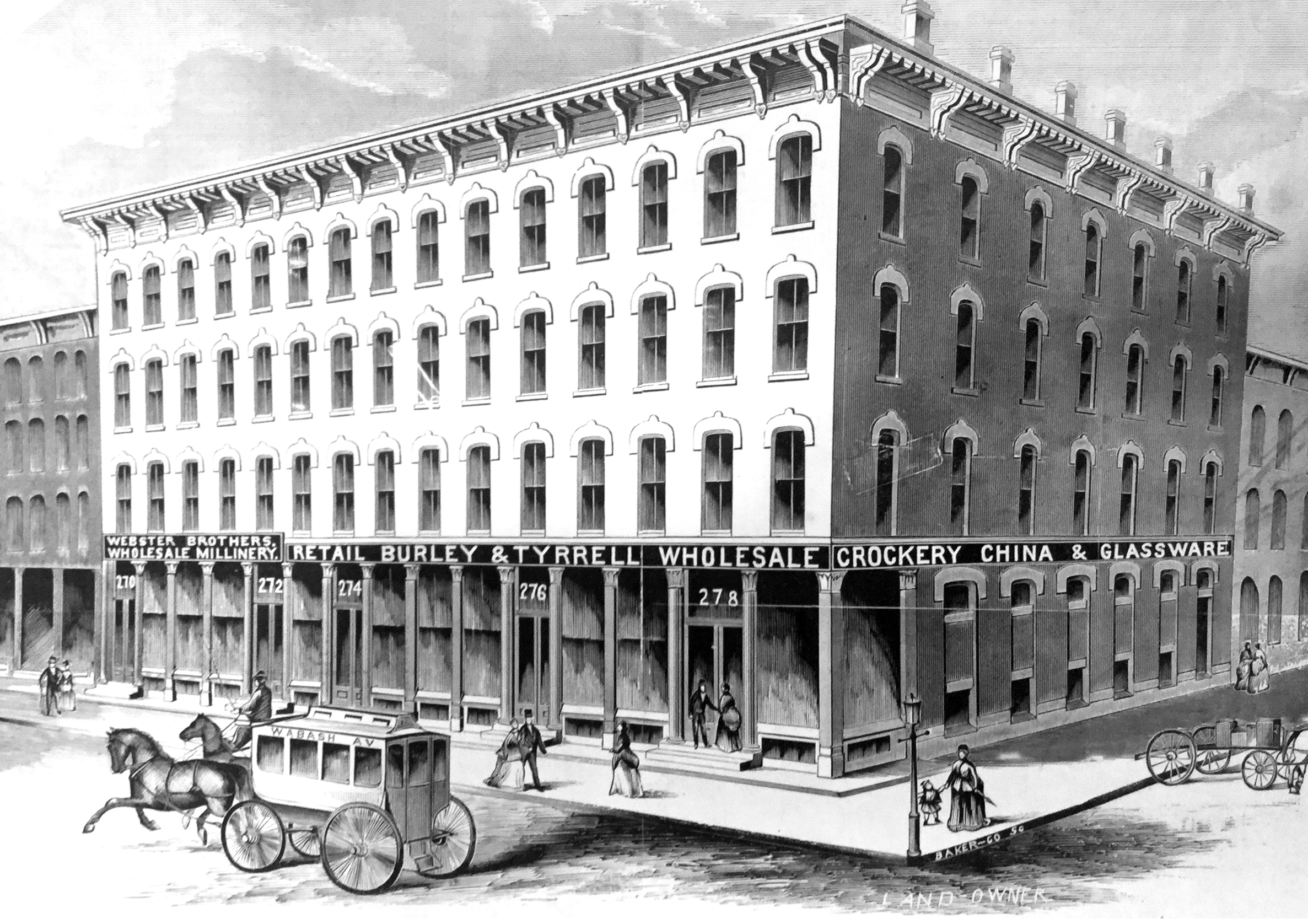 BURLEY & TYRRELL, WHOLESAlE AND RETAIL DEALERS IN CROCKERY, CHINA AND GLASSWARE.1
This firm, which dates back to 1838, and sustains a high mercantile character, will occupy the large store on the corner, as will be seen by the illustration, which will give them one f the largest and most commodious store in the city, This firm has twice run the gauntlet of fire, having been burnt out in 1839, and again in the late conflagration. Fire, however, seems to strengthen them, as both times they emerge from it int better quarters, with a larger and more available stock of goods. They deal extensively in crockery, china and glassware, both at wholesale and retail. This spring they will be provided, like ll our merchants, with an entirely fresh stock, and will be fully prepared in their new store, to sustain their branch of the Chicago market. Their old customers will be pleased to see this house again so comfortably located, and so well prepared to promptly fill their orders.

WEBSTER BROS., WHOLESALE MILLINERY GOODS.
The north store of the Averill block will be occupied, as seen in the engraving, by this well-known and reputable house, large dealers in millinery and straw goods, who are fitting it up in a very handsome and convenient manner. Their stock will comprise everything in their line, and their customers will find thyem better prepared than ever to serve them. The energy of our merchants in getting into new quarters and re-establishing themselves, will be appreciated by the trade.

Mr. Averill seems to have been fortunate in securing such staunch houses to tenant his new building.

A brace of burglars who believe in mixing business and pleasure—whose sang froid permits them to burgle, dine, smoke, and finally play a friendly game of billiards all on the same job—visited the Wexford building at 339 South Wabash avenue on Saturday night.

The robbers first entered the offices of Sperry & Hutchinson on the fourth floor. Then they went to the rooms of the Pomeroy Surgical Appliance company. The scene of their next visit was the restaurant conducted by Miss M. A. Hely, where they cooked themselves a meal. From the restaurant they went to the Wabash billiard hall, where they helped themselves to somne cigars and rolled the ivories around one of the tables for a while.

The robbers got two cheap watches and $100 from Sperry & Hutchinson’s, six aprons from the restaurant and a box of cigars from the billiard hall.

Central District Has Big Deal.
The central business market was featured by developments regarding the purchase by the Marshall Field estate of the Anna B. Averill estate property at the northeast corner of Wabash avenue and Van Buren street. The deal has not actually been closed, but it is understood all the terms have been arranged, the purchase price, it is said, being around $800,000.

It is said the closing of the deal has been delayed owing to the fact that Mrs. John C. Grant, wife of Prof. Grant of the Harvard school, one of the Averill heirs, is abroad, and the deed had to be sent for her signature. It is expected to reach Chicago on its return in a few days , when the deal, it is expected, will be formally closed,. The other heir is Mrs. Eratus Foote of Chicago, wife of the president of the Fort Dearborn Foundry company. Both were nieces of Mrs. Averill.

The property fronts 106 feet on Wabash avenue and 100 feet on Van Buren street, and is improved with with a four story and basement building, which was remodeled at an expense of about $50,000 about three years ago, by the Wexford company, the present lessee of the property, and is now known as the Wexford building.

About four years ago the property was leased by the Averill heirs to Timothy J. McDermott of De Kalb for twenty-five years at a annual rent of $25,000. He subsequently assigned the lease to the Wexford company, in which he is interested.

Ginger Rogers, petite and snappy singer, who has just closed a seventeen weeks engagement at the Friars Inn at Chicago, sang and danced a bit. Miss Rogers has appeared in Galveston upon previous occasions.2

A BIG-EYED GRL named Lucille L Sueur was a chorus girl in Mike Fritzel’s Friar’s Inn at Wabash and Van Buren, opened in 1919. You know her now as Joan Crawford. A fluffy-haired kid showed up with a team called the Texas Red Birds, and Fritzel hired the three for $50 a week. She was Ginger Rogers, adept at the Charleston and Black Bottom. 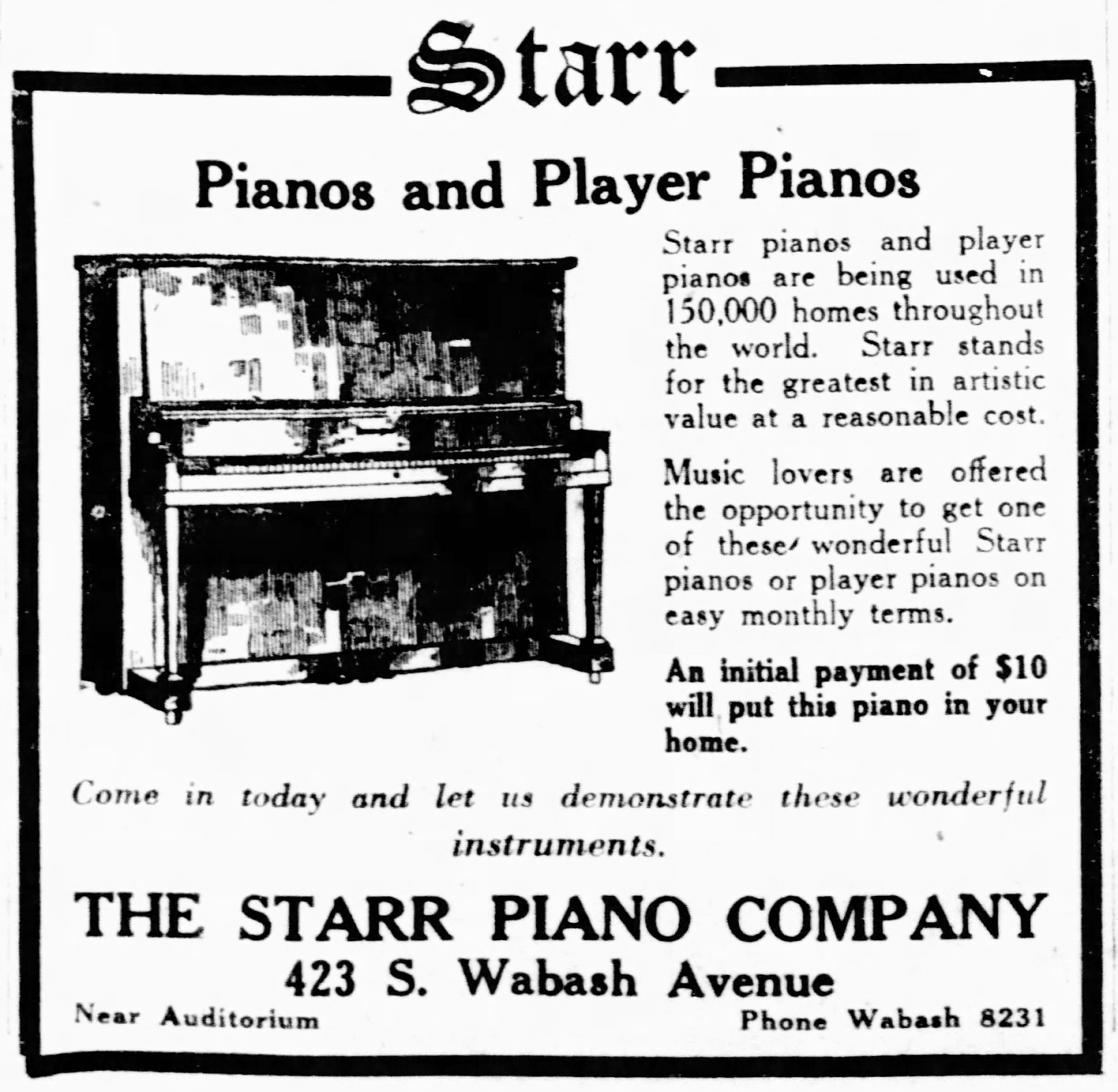 The Starr Piano Company, which owned the Gennett record label, was just down the street of Friars’ Inn. Fred Wiggins, who managed the Chicago Starr store, noticed the large crowds at Friars’ Inn, offered to record the group.

Still another old time loop structure has been forced into the wrecker’s hands by mounting taxes. This morning a pick and a shovel squad will start tearing down the four story Wexford building at the northeast corner of Wabash and Van Buren, built in 1876 (sic) and now owned by the estate of Marshall Field. When cleared the property will be used as an open air garage by the Downtown Parking Stations, Inc., which have rented the premises for five years, with a sixty day cancellation clause in the lease.

It is estimated by the Field estate that instead of having a deficit in operating the old four story building, the cleared space will yield enough revenue to pay the taxes. During 1933 the gross income from the property is reported to have been $33,000. Expenditures, including taxes, maintenance, etc., were $48,000, so there was a deficit of $15,000.

To Be Demolished by March 22.
A wrecking contract has been signed with W. J. Newman company which calls for completion by March 22. The Downtown Parking Stations, Inc. will then start work on an $8,000 building of extremely modern design.

The estate of Marshall Field bought the corner in 1913 for $750,000 from the Merchants Loan and Trust company, trustee for the Averill trust, subject to a twenty-five year lease for the entire property which ran from 1909 to 1934. This long term lease was originally made to Timothy F. McDermott, but later was transferred several times.

This lease caused the Field estate considerable embarrassment, for subleases were made to tenants who figured conspicuously in police news.

Buys Remaining Lease.
Mike Fritzel operated in the basement what was then one of Chicago’s best known night life centers—the Friar’s inn. It achieved so much notoriety with police and federal prohibition agents—being padlocked in December, 1927—that the Field estate, in 1927, bought out the remaining few years of the twenty-five year lease. Various unduly lively tenants were promptly ousted. 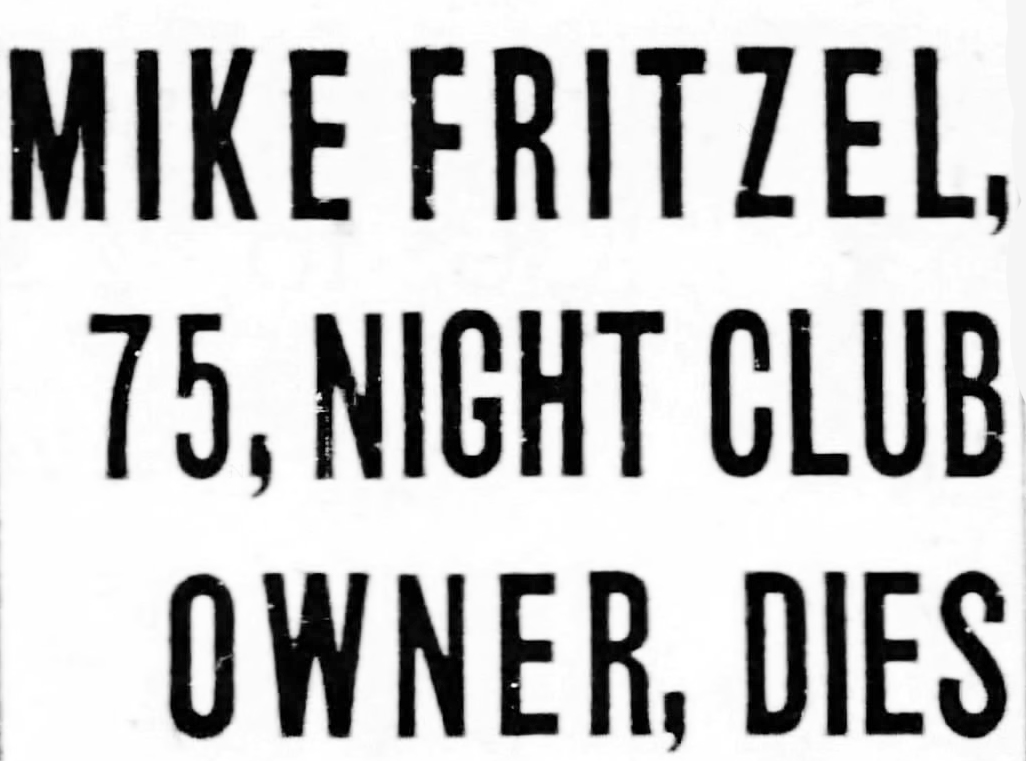 Son of a Nebraska cowboy, Fritzel came to Chicago on a cattle train in 1898, got a job as a bartender in the old Haymarket Square area, and in 1903 opened a tavern at Peoria and Randolph sts. He moved to 1654 Madison st. in 1904 and founded the Arsonia cafe, a song and dance place where performers worked on a strip of canvas.

Gilda Gray, whose shimmy dance made her nationally known, made her debut there. Among celebrities who attended the cafe were Lillian Russell, Jim Corbett, Bob Fitzsimmons, the Dolly sister, Beverly Bayne, and Francis X. Bushman. 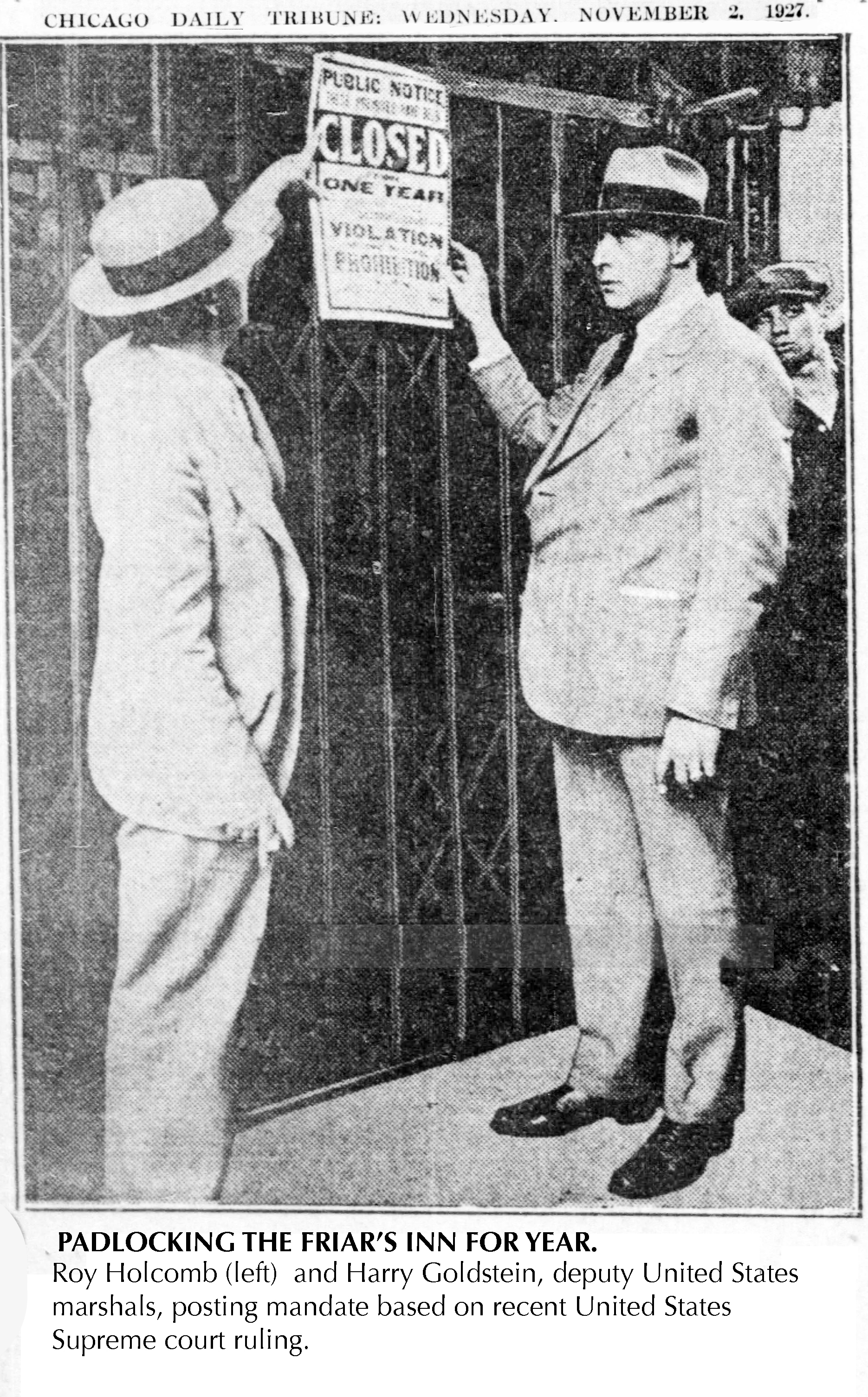 Opens Friars Inn.
In 1921 he opened the Friars inn in a basement at Wabash av. and Van Buren st. and later the Cafe Royale and the Tent at other downtown locations. Another of his clubs was the famed Midnight Frolics in 22d st., now Cermak rd.

Joan Crawford and Ginger Rogers were chorus girls in Friar’s inn. Texas Guinan was the big attraction at the Cafe Royale and once stopped the show to introduce two prohibition agents who had a ringside table.

Shortly before the end of prohibition in the fall of 1932, Fritzel took over the defunct Chez Pierre at 610 Fairbanks ct. and opened it as the Chez Paree. He reportedly won the cabaret’s lease on a $50,000 bet on President Roosevelt’s election.

Buys Another Cafe.
With his partner, Joe Jacobson, Fritzel brought to the night club movie and stage personalities.

The two men opened the restaurant at 201 N. State st. in 1947 and called it Mike Fritzel’s. In 1949, they sold the Chez Paree. Fritzel sold his interest in the State st. restaurant in 1953 and on Sept. 1 of this year purchased the Trade Winds restaurant, 865 N. Rush st.

Dr. Morris Lev, who was called to attend Fritzel yesterday, said Fritzel’s wife, Janet, was in Florida on a vacation. 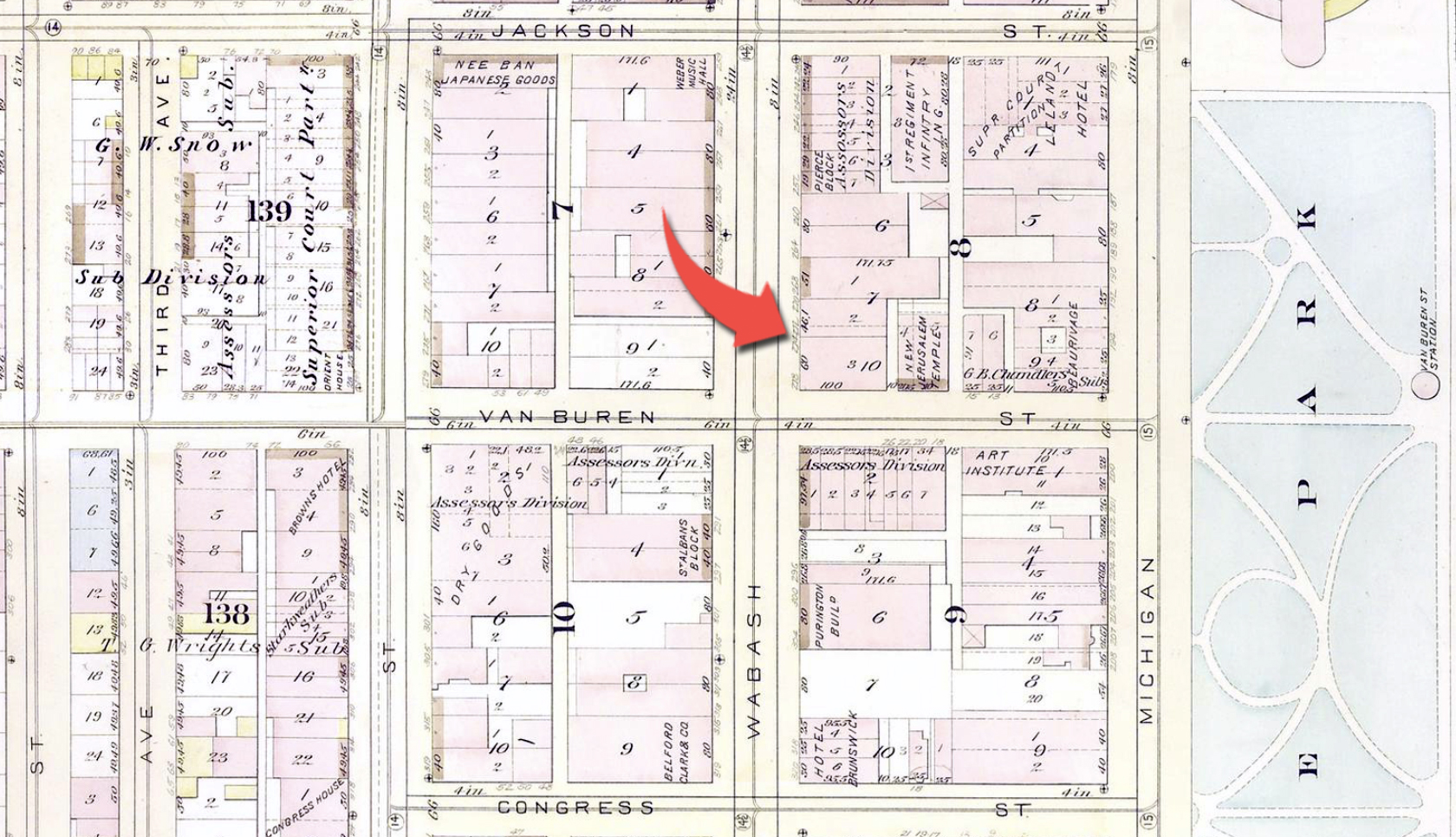 1 Following the death of A.G. Burley in 1897, business of Burley & Tyrrell slowly declined. His nephew eventually decided to take over and rejoined both companies in 1907. The united Burley & Co. remained highly successful during the next years, but it was decided to sell the company to Albert Pick & Co. in 1919. The deal was complete by 1923.

2 In 1926, Ginger Rogers entered a local Charleston contest and won, going on to become champion Charleston dancer of Texas. The prize included a vaudeville tour and Lela, her mother, taking over management of Ginger, hired the two runners-up to support her in a group called “Ginger and Her Redheads”, with Lela supplying costumes and linking material.