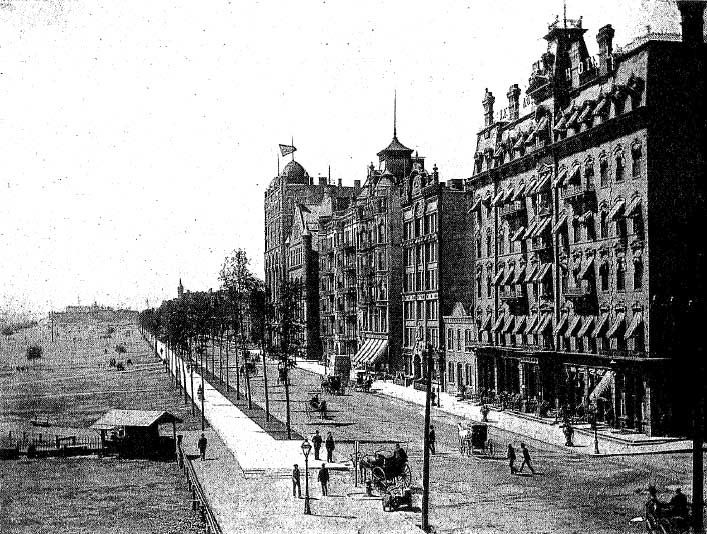 1887 photo of South Michigan Avenue. In the order of their sequence may be seen the old Leland Hotel, the Hotel Richelieu, the Masury Building, the Hotel Victoria, the Art Institute, and the Studebaker Building (the Fine Arts Building).

When unlimited wealth, original ideas and genuine artistic taste are combined upon one object, the result is almost certain to reach, if it does not exceed, one’s highest anti cipations. It is such a combination that has produced for Chicago the most extravagantly sumptuous hotel of its size in the world. H. V. Bemis, whose name has become a synonym of enterprise and progress to all Chicagoans, opened, in 1885, the Hotel Richelieu, which, in its elegance and magnificence beggars description. 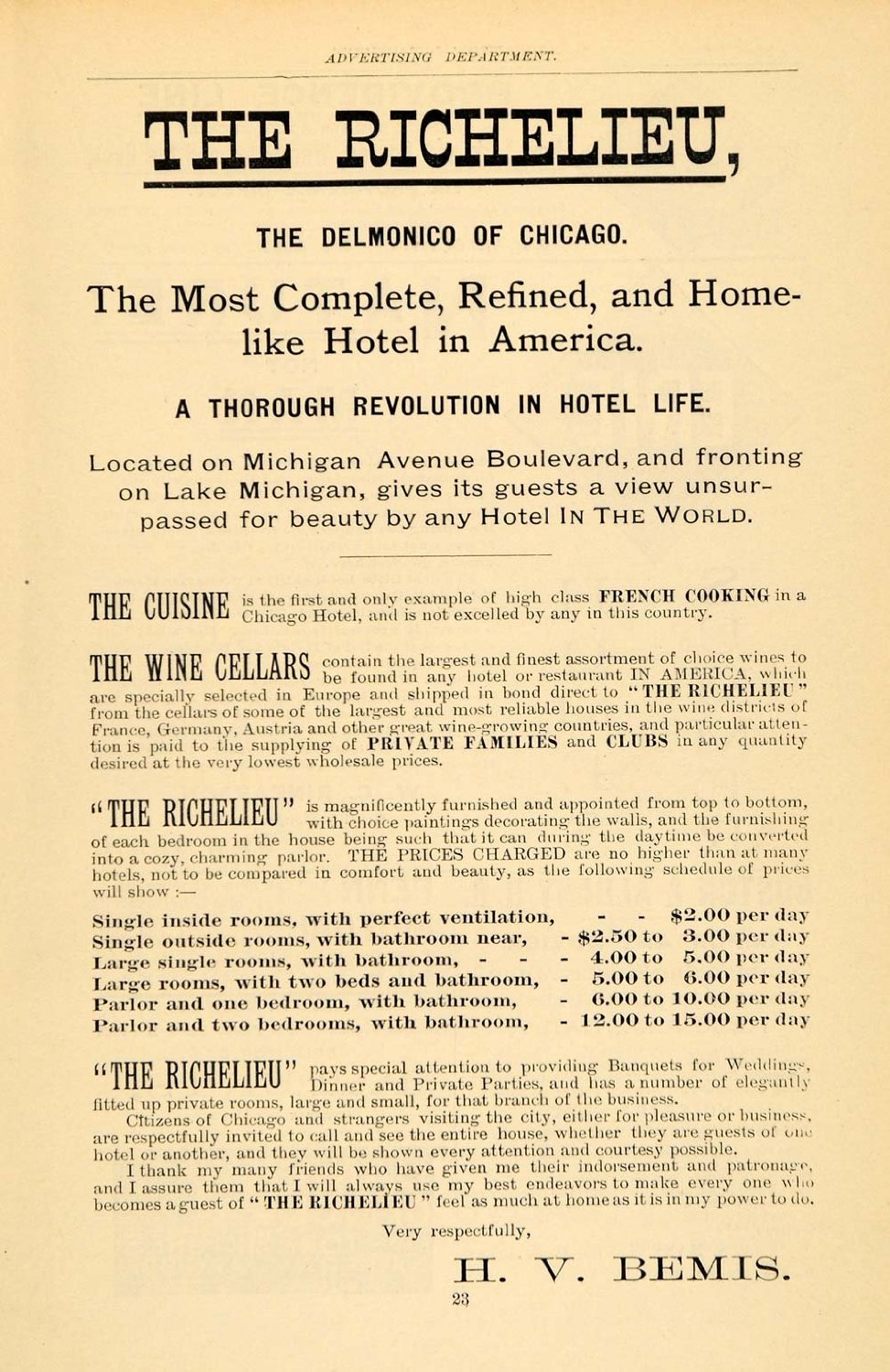 The hotel occupied Nos. 187-88 Michigan Boulevard, has a frontage of sixty feet and extends back one hundred and eighty-five feet. The building is in reality two distinct buildings, one front and one rear, separated by a court fifty-four feet, by thirteen ftet, and bridged by arched iron passage-ways connecting the hallways of each floor. The object of this arrangement is to lessen the danger in case of fire, guests being able to escape from one building to the other, with case and safety. The front is built of handsome pressed brick, and over the entrance is a statue of the famous Armand Jean du Plessis, Cardinal de Richelieu. The statue is of white marble, six feet and six inches high, from the chisel of Le June, the French sculptor, and is an exceptionally line piece of work.

The hotel was formally opened by Mr. Bemis in the summer of 1885, and he conducted it until the following December, when it was leased to Messrs. Clair & Harte. The Richelieu was known for it’s kitchen, providing elegant Parisian fare to a discerning clientele, which included the likes of theater diva “The Divine Sarah” Bernhardt.

The exclusive hotel closed its doors in 1895. Just up the street, located at the intersection of Adams and Michigan, S. Karpen & Bros. were looking for a new home for their furniture business. They’d sold their building and the leasehold on the land they occupied to the Peoples Light, Gas & Coke Company who wanted to locate their new headquarters on the property. The Karpen’s in turn, purchased the Richelieu and hired architects Hessenmueller & Meldahl to give the building a complete makeover.

The Karpen’s business flourished, becoming the largest upholstered furniture manufacturer in the world. In 1910 the company moved, once again a little further down Michigan Avenue, and this Karpen became the Findlay. In the early 1980s the building was refurbished and the first two floors were given the new limestone facade when the city’s Housing Department moved in for a long stay.

Chicago developer Louis D’Angelo is in the process of converting the Richelieu into four 2,650-square-foot full-floor residences priced from $1.35 million to $1.45 million and a 4,300-square-foot penthouse being offered as raw space for $2.3 million. The new condo is called Richelieu Flats.

From the 1892 Guide Book, “Chicago by Day and Night. The Pleasure Seeker’s Guide to the Paris of America”

A block north of the Auditorium is the Richelieu, the famous hostelry the destinies of which are presided over by the renowned “Cardinal” Bemis. For people of means, to whom money is less of an object than the engagement of luxuries, the Richelieu, they say, is the place par excellence at which to stop. Some notable people have honored the Richelieu with their presence, and one is just as liable to run plumb against a real, live English Lord or Italian Marquis within its doors as against a plain, everyday American citizen. Sara Bernhardt selects the Richelieu when in the city; so does Mrs. Langtry when the confines of her private car become too narrow for comfort. The Richelieu is famous for the rare pictures that adorn its walls, some of which are worth small fortunes, and also—whisper this with bated breath. Oh, ye irreverent!—for its wine cellars, which are stocked with some of the rarest and costliest vintages to be found on the entire continent. On state occasions, when the Cardinal is entertaining some choice party of notables, he is wont to disappear suddenly, absent himself for about fifteen minutes and then reappear with a quaint-shaped bottle or two in either hand covered with cobwebs. Those who sample the contents of said bottles close their eyes, pat their stomachs softly as the divine liquid glides down their throats, and then shed tears of joy and gratitude to the Cardinal for having given them the happiest moment of their lives. If you are a connoisseur of wines and wish to test your art in judgment thereof, cultivate the acquaintance of the Cardinal, and perhaps he will go down into the cellar for you.