THE NEW ORIENTAL BUILDING.
One by one are our familiar landmarks being restored, as if by some magic hand. The new Oriental building stands on the old site, Nos. 120, 122, and 124 Lasalle street, nearly opposite the new Chamber of Commerce. The design is by J. M. Van Osdel, Esq., and the builders are Messrs. Colwell, Clarke & Co., of Ottawa, Ill. Geo. E. Walker, Esq., is the owner of the real estate, who has invested $120,000 in its erection. Its frontage is 75½ feet on Lasalle street, the depth 429 feet, five stories in height, with basement. The Mansard roof is peculiar in its design, and gives a very beautiful finish to the structure. The ornamental stone work has no equal in its artistic execution, the whole building being in perfect harmony , and totally devoid of any attempt to blend half a dozen different styles of architecture into one. The girders throughout the building are of iron. The offices are rooms are tastefully finished and furnished with mantles and grates, while speaking trumpets communicate throughout the building with the janitor’s room. The hall and stairway are elaborate, the former being 15 feet wide, and leading to the Masonic Hall, from which the building takes its name. The whole structure is under the immediate supervision of Mr. A. E. Walker. Taken all in all, the new Oriental is a much better and more costly building from the old, and its facade is perhaps the finest that Lasalle street will ever boast throughout its entire length. Mr. Walker is entitled to much praise for having restored this notable structure, which work he commenced almost immediately after the fire.

THE LIVERPOOL & LONDON & GLOBE INSURANCE CO.1
The above familiar words will be seen buy the passer-by on Lasalle street cut in the heavy stone on the front of the Oriental, over the large offices occupied by that staunch old company. They remind us all of the dark days of the fire, when our puerile home underwriters went to the dogs, when many of the Eastern companies went by the board, but this institution stood firm like a rock in the sea, unharmed by its losses, and paid its policies dollar for dollar, through its popular agent here, Mr. William Warren. Our people are all glad to see this company get into such fine quarters, as it is respected and patronized here now more than ever, and has a most glorious future ahead, as, having stood the crucible, it came out fine gold. Mr. Warren deserves the warm encomiums of the English stockholders for his prompt action and decision in securing thus early, probably the best, location for an insurance company in the city.

The cash capital and assets of the Liverpool & London & Globe is $20,106,900, and its assets in the United States $3,640,450, with an unlimited liability of the proprietors. It paid our burnt-out citizens who were fortunate enough to hold its policies, after the fire, $3,252,782.26, which was indeed a blessing.The standing of this company is such in this community that little need to be said of it. The new offices in the Oriental are fitted up in a solid and comfortable manner, befitting the business and character of the company, and with good taste. Mr. William Warren is the general agent for Illinois, Wisconsin, Iowa, Minnesota, Nebraska and Kansas.

The Continental
The Exchange
The Brewers’ and Masters’
The Merchants’ and the Peoples’ of Newark N.J.

O. W. Barrett, the senior member of this firm, has had twelve years’ experience as an underwriter in Chicago. His friends will be glad to welcome him to his old quarters where they will find him very pleasantly situated, and better prepared to serve them than ever. The companies controlled by this firm are among the very best now doing business in the city. 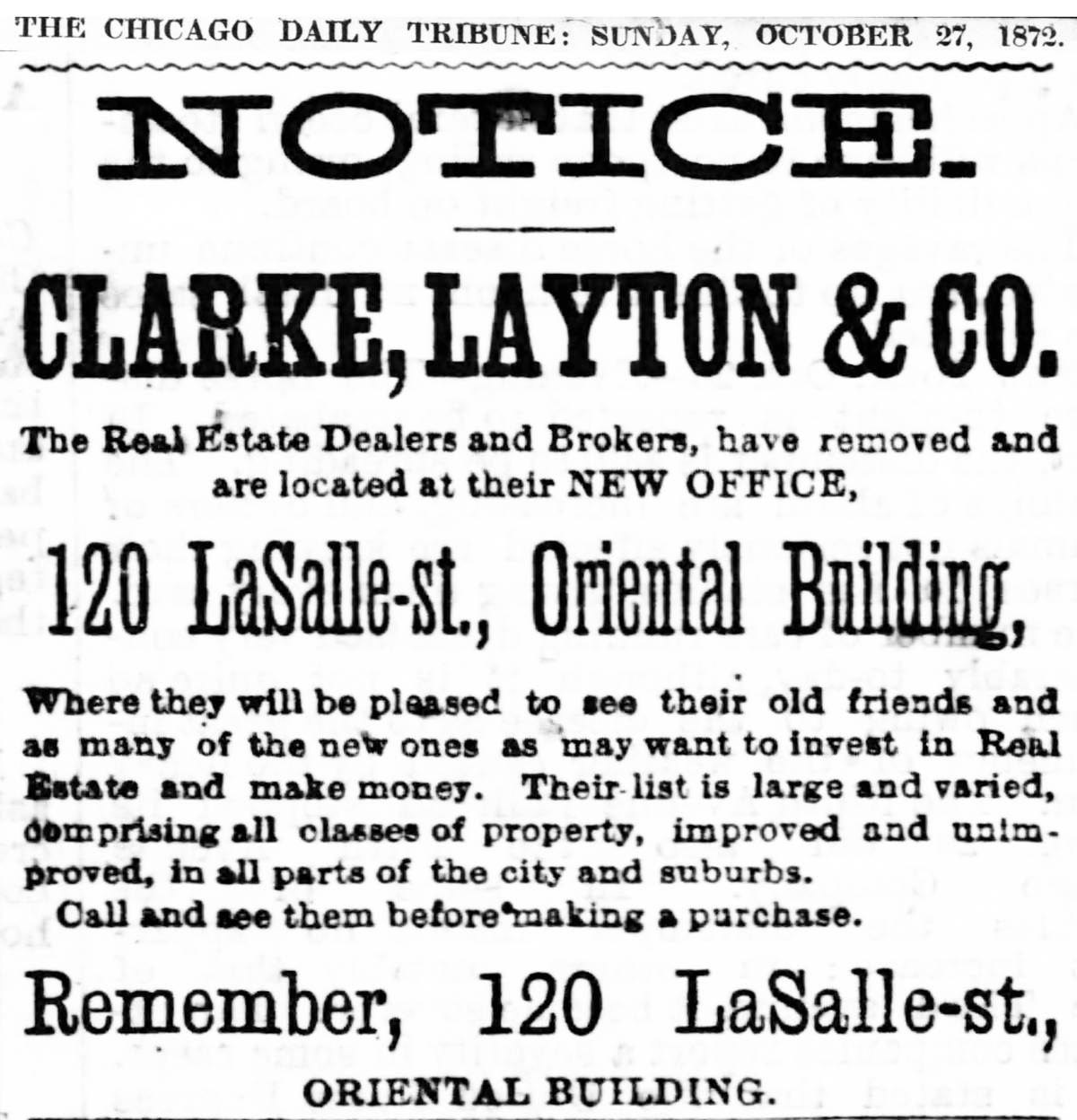 CLARKE, LAYTON & CO., REAL ESTATE.
Across the hall from the Liverpool & London & Globe office, Messr. Clarke, Layton & Co., the well known real estate agents, have leased a fine, roomy office. Their exact location will appear in the engraving. This is the representative real estate house of Chicago, Geo. B. Clark, Esq., the senior member, being one of the very oldest and best known of all our land men, while R. P. Layton, Esq., has had long and careful experience in real estate matters, and Chas. P. Silva, Esq., is, of all our younger men, the most deservedly prominent and popular. This firm has figured largely in real estate for many years. The entire estate of Stephen A. Douglas, or the land at one time owned by him, were sold through them, and the Cook county records are covered all over with their transactions. They were among the most active in the early days of the south parks, and in all great enterprises they have constantly taken the lead. The firm represents many of our wealthiest capitalists, whose estates they exclusively manage. They have mad for their customers and average of twelve per cent on every investment, while in hundreds of instances a larger profit has been made.

The La Salle block, on the corner at Madison street, was remodeled about eight years ago and put into fairly good shape for modern usage, but even at that it is not large enough to make the returns that ought ti be made on the money invested in it, according to its market valuation. The grounds contain 52½x81 feet, and were valued at $527,000 by the tax commission. The building was figured in at $95,620, which makes the total $622,620. The property is owned by Mrs. Della S. Gallup and other heirs of the Gallup estate. A purchase of all three of the properties and the erection of anew building like the Stock Exchange building would represent an investment in the neighborhood of $2,000,000.2 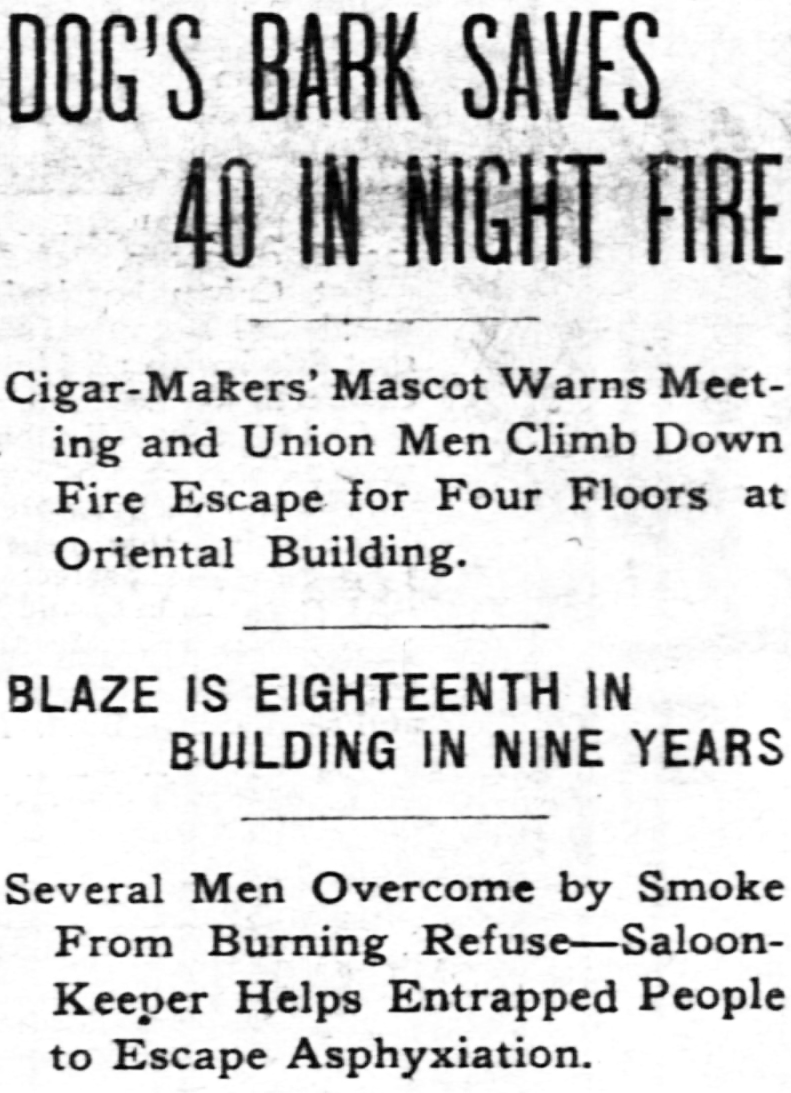 Forty labor union men scrambled down a fire escape from the fourth floor of the Oriental building, 122 La Salle street, at 8:30 o’clock last night, to save themselves from asphyxiation.

But for the timely warning of “Malt,” the little fox terrier mascot of the Cigar Makers’ local No. 15, many of the men would have lost their lives. As it was several had to be resuscitated after reaching the street.

Eighteenth Fire in Block.
The fire, which was the eighteenth in the Oriental building in the last nine years, had its origin in the basement in a pile of waste paper. It was said that nine of the previous conflagrations began in this room, where the janitor treasures up refuse to be sold to the paper mills.

The flames ascended the elevator shaft, making escape by the stairway impossible. The elevators are not used after 6 o’clock.

Dog and Saloon Man Heroes.
“Malt” and “Johnny” Kolle, the saloonkeeper on the fourth floor of the Oriental building, were the heroes of the occasion.

The rather ardent discussion on “What Makes Some Cigars Burn Uneven;y,” between the men of local No. 15 was interrupted by Malt’s whines as he pawed at the locked door of the meeting-room. The little mongrel was commanded to be quiet, but he did not heed the rather cross words of his many masters. Finally one of the men went to the door and on opening it was driven back by a gust of dense smoke.

The men had become panic stricken when Kolle’s deep voice was heard above the general din. He told the men to go down the fire escape. He warned the men on the floor above and in a few minutes was standing in the thick smoke by the window watching the last of the men escape.

Harry Cattel, one of the last to leave the building, grabbed Malt, who was hurrying the men with his sharp barks, and descended.

The following were partially overcome by the smoke: 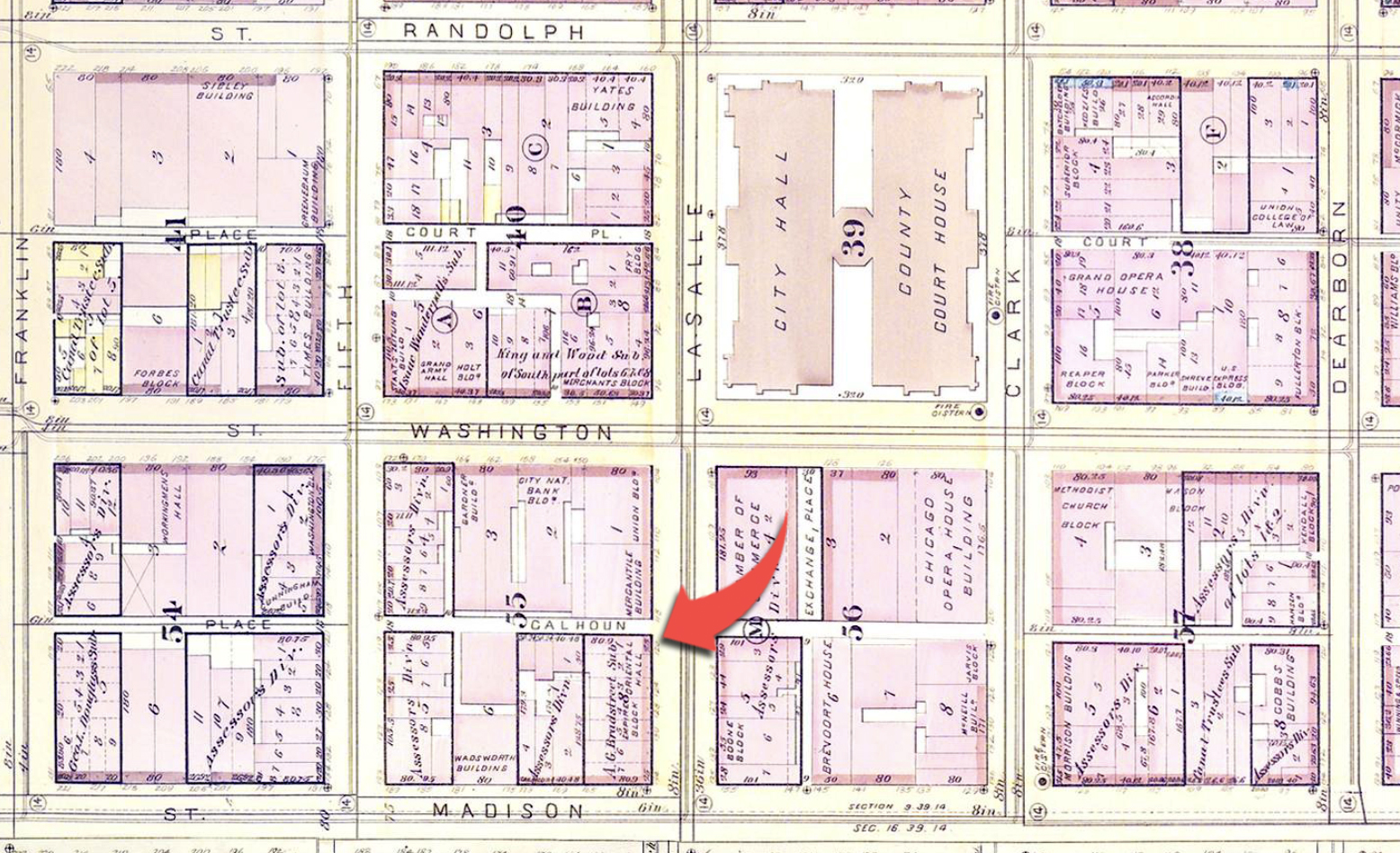 1 The Liverpool & London & Globe had a strong presence not only in the UK, where it was one of the main insurance companies, but also in the British empire, especially in Canada, Australia and New Zealand, and even in the US, where its first branches had opened in 1848. In 1919 the Liverpool & London & Globe was acquired by The Royal, a company based in Liverpool and one of the greatest British exporters of insurance, in what was the largest merger in British insurance history. The name survived but it became part of the ever increasing portfolio of a group that, through successive acquisitions and mergers, became Royal & Sun Alliance (RSA since 2008).

2 This building was never built. The La Salle Hotel occupied this site in 1908.

It was here on 30 March 1883, that the first Medinah Shrine Ceremonial was staged, complete with costumes and props, but without Potentate Tobey who was conducting a court-martial that day.