Work on the Bryant Block, at the corner of Randolph and Dearborn streets, has been delayed for want of iron, is now going on finely.

REBUILT CHICAGO.—NEW BUILDINGS IN THE BURNT DISTRICT.
The Bryant Block.
Among the finest of the office buildings recently completed is the Bryant Block, at the northeast corner of Dearborn and Randolph streets, which the artist of The Land Owner has chosen for an illustration this month.

This edifice is 80 feet front on Dearborn street by 120 feet on Randolph street, and five stories and basement in height. It is divided on each floor into offices, which are fitted up with all modern appliances and conveniences. The fronts are of cut stone of uniform design in the Italian style, with bold Corinthian pilasters, running up two stories. The windows have columned jambs and arches throughout. The whole is surmounted by an elaborate cornice and balustrade. Messrs. Wheelock & Thomas, the architects, endeavored in this building to obtain the greatest possible amount of light, with an appearance of boldness and solidity. That this result has been accomplished, and was a desideratum, is shown in the rapid manner in which the the building has found tenants, among whom we may mention the following:

The Bryant Block was significantly remodeled (both inside and out) in 1889 when the Chicago Real Estate Board moved into the building and it was renamed the Real Estate Board Building. It has since been renamed the Delaware Building. The 1889 remodeling affected the first and second stories and a two-story addition to the top; these alterations were made in a manner commensurate with the original design. The facade design is remarkably intact. It is the opinion of the Advisory Committee that the preservation of this building is well merited. Due to its interior plan this building could readily be adapted for use by small retail establishments taking full advantage of its unique interior spaces. 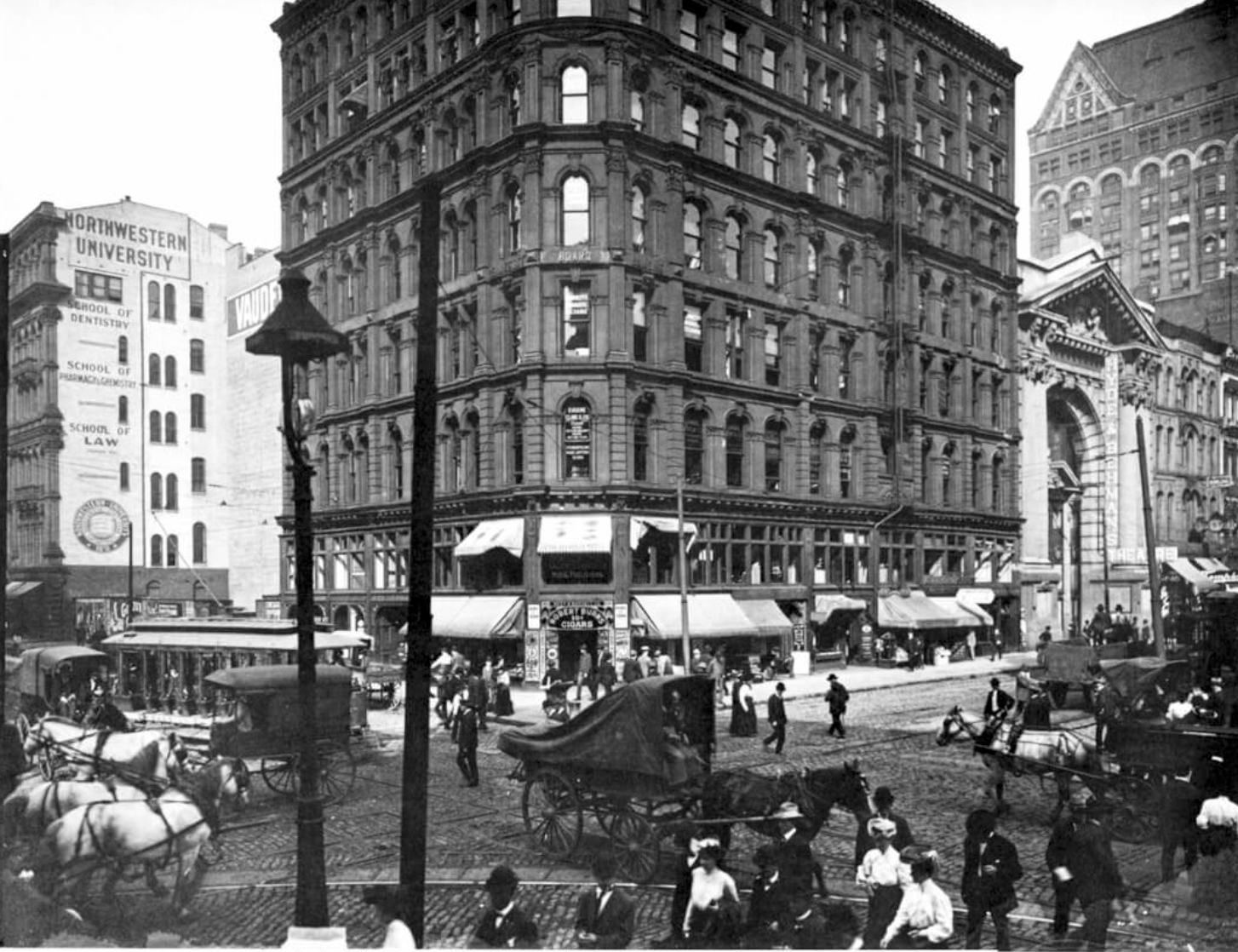 Description: Constructed primarily of stone and brick, the Delaware Building is Italianate in style. It originally had five stories and an English basement. stairways, located at the angled corner and on both the Randolph and Dearborn Street sides, led up to the main floor and down to the lower level. Businesses and shops were located on the two lower floors while the four upper floors were used for offices. The Building originally had a frontage of 80 feet on Dearborn Street and 120 feet on Randolph Street. The Randolph Street entrance leads to an interior light court, the stairs and floors of which are metal with glass prisms . The glass prisms allow a maximum amount of light to penetrate to the lower floors from the skylight above. The stair railings and balusters of the light court are brass and wrought iron.

Metal was used in the construction of the ground floors to permit the opening of the walls for display windows. The upper floors are brick and artificial stone metal support.

When the building was remodeled in 1889, three bays were removed from the eastern end of the Randolph Street facade. The ground and main floors were remodeled and two additional stories of artificial stone were added. A denticulated cornice with a wrought iron balustrade topped the building. The 1889 remodeling was sympathetic with the earlier design. Although the corner of the top two stories is rounded rather than angled, the spacing of the columns and bays is in harmony with the lower floors.

Today, the first two stories have again been remodeled and are largely glass. The upper six stories are intact and the building still has a bracketed and denticulated cornice. 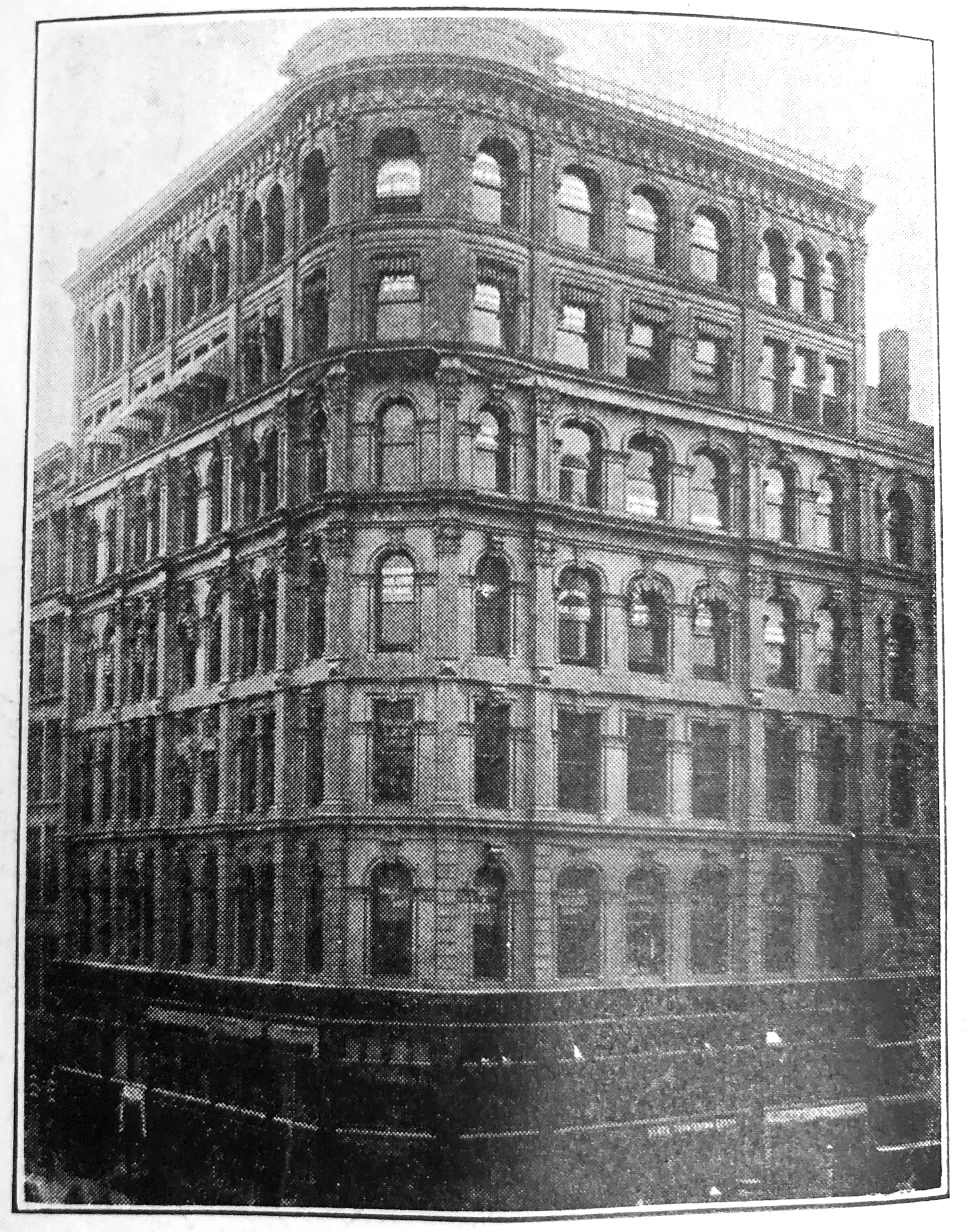 Comparison: The Delaware Building dates from the same period as the McCarthy Building and both are good examples of the type of construction that dominated the central business district immediately after the Fire.

Both the Delaware and McCarthy Buildings are Italianate in style and their facades are similar in many respects. They employ some of the same ornamental features, have arches above the windows, and similar Corinthian columns supporting these arches. The stilted segmental arches of the McCarthy Building are joined to form arcades, creating a facade more unified than that of the Delaware Building. These arcades give the McCarthy Building a pronounced horizontal emphasis, which is strengthened by a continuous string course at each sill level.

The facade of the Delaware Building is less unified because of the variation in the width of the bays, the variety of arches (conventional, rectangular, and stilted segmental arches) above the windows, dissimilar string courses, and the lack of a dominant horizontal or vertical emphasis. The Delaware Building is an example of a variety of Italianate design that was later to become very popular. This variety, High Victorian Italianate, is, according to Marcus Whiffen, characterized by a “profusion of shadow-forming moldings, variform openings, and small-scale ornament.”

The major difference between the Delaware and the McCarthy Buildings is seen in the interior plan. The Delaware is a hollow square in plan with a glass-covered light court in the center. The offices open directly onto, and consequently building circulation is organized around, this central light court.

Significance: The Delaware Building is the only major building in a visually prominent Loop location which has retained its 1870s character. As a representative example of the Italianate style, it provides a complex and varied facade which contrasts nicely with the Miesian qualities of the Civic Center across the street.

Recommendation: The McCarthy Building has been continuously occupied and today the entire building is tenanted by small firms. It is still in rather good condition. The Delaware Building is today largely unoccupied (there are no tenants above the third floor) and is in questionable condition. The stone facade is deteriorating and the Advisory Committee feels that unless the stone can be stabilized, continued use of the building would be impossible. 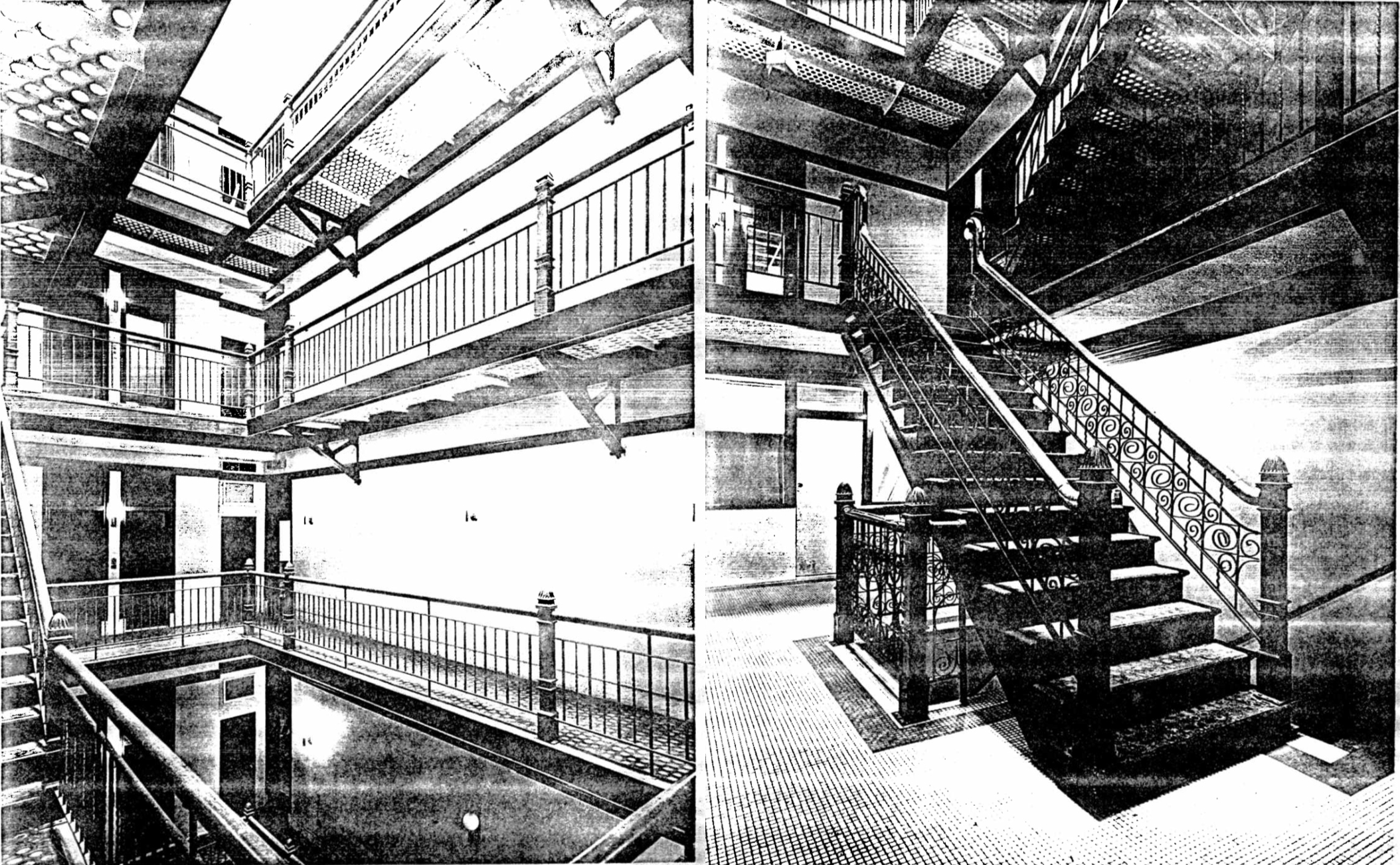