NEW BUILDING OF THE AMERICAN MERCHANTS UNION EXPRESS COMPANY.
This magnificent structure, now being erected on Monroe street, about midway between State and Dearborn streets, when completed, one of the finest of all our new buildings, and from its unique architecture and general imposing appearance, will attract great attention. The immediate locality where it is situated seems destined to contain the best buildings erected during this present year. Immediately east arises the splendid facade of the Pike building; across, on State street, looms up Palmer’s hotel, and just west are the Honore buildings, while on all sides are arising other prominent and symmetrical structure. 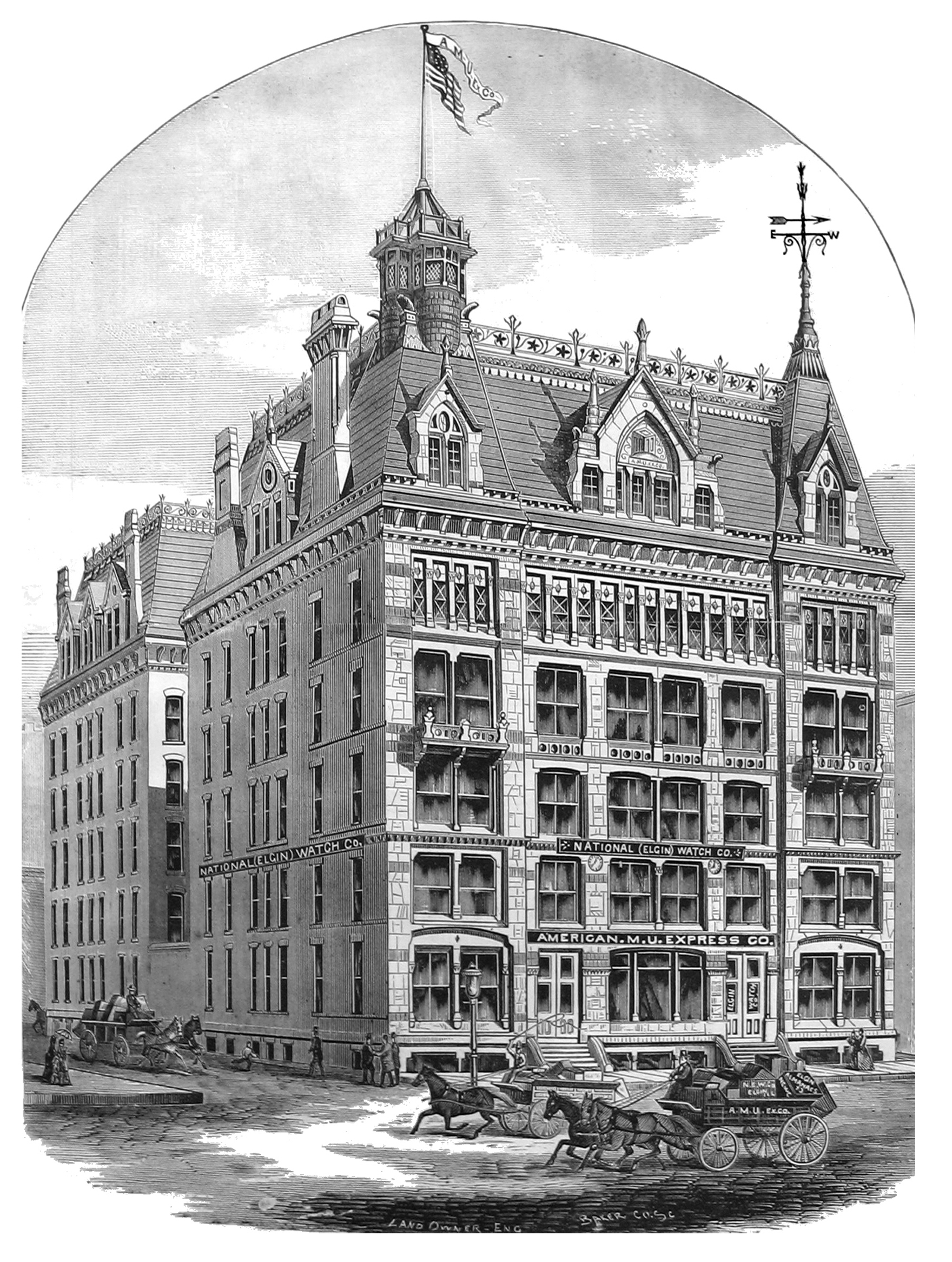 The dimensions of this building are 90 feet on Monroe street, by 190 feet on the alley, six stories and basement in height. The offices of the company are on the corner of Monroe street and the alley, 37 by 70 feet, directly over which, with an entrance over the main stairway, is the office of the Assistant General Superintendent. There are also two large stores on the ground floor in addition to the above. The entire rear of the building will be operated by the company for handling and storing freight. For this purpose the arrangement is admirable, and has been carefully planned. An entrance 14 feet wide in the rear, gives access to the teams and drays, which can back up to the platform and receive goods from three sides, all goods being handled under cover; doing away with the old inconvenience of encumbering sidewalks outside the building. The entire edifice is heated by steam, with water closet and cloak room in every office. The wainscoting is very bold of black and white ash. All the woodwork of the building is of hard wood, carefully worked. In the fifth and sixth stories are two halls, extending up through two stories, one occupying the front, 78 by 70 feet, and the other the rear, 78 by 90 feet, each 30 feet high. A large court, 30 feet wide, extends through the entire building from east to west, cutting it above the first story.

The business of this company, which has now grown to such enormous proportions, was commenced in 1835 by Henry Wells and William G. Fargo, and was then called Well’s & Co.’s Express. In 1845 it was re-organized into a joint stock company. The present officers of this corporation are: William G. Fargo, President; Alexander Holland, Treasurer; and James C. Fargo, General Superintendent. The head offices are in New York.

The territory occupied by this comapny is divided into three divisions, under the management of three Assistant General Superintendents: Easter Division, Southwestern Division and Northwestern Division, the latter comprising the States of Michigan, Illinois, Missouri, Wisconsin, Iowa, Minnesota, Nebraska and Kansas, of which Mr. Chas. Fargo is Assistant General Superintendent, with headquarters at Chicago.

The various ramifications of this company are seemingly limitless. They occupy one hundred and fifty separate and distinct lines of railway, the aggregate number of miles being 14,379. They have 2,030 different agencies, and employ in all divisions, nearly ten thousand men. The estimated amount of money in the hands of agents and in transit at all times amounts to $10,000,000.

In the Chicago agency there are employed, at this time, 193 men. The number of horses in use is 125, with 46 wagons. The number of passengers arriving at and departing daily from Chicago, is 90. S.G. Seaton is the agent here. At present the general offices are at the corner of Washington and Clark streets, in the Exchange building, with local offices at 520 Wabash avenue, and 218 West Randolph street. 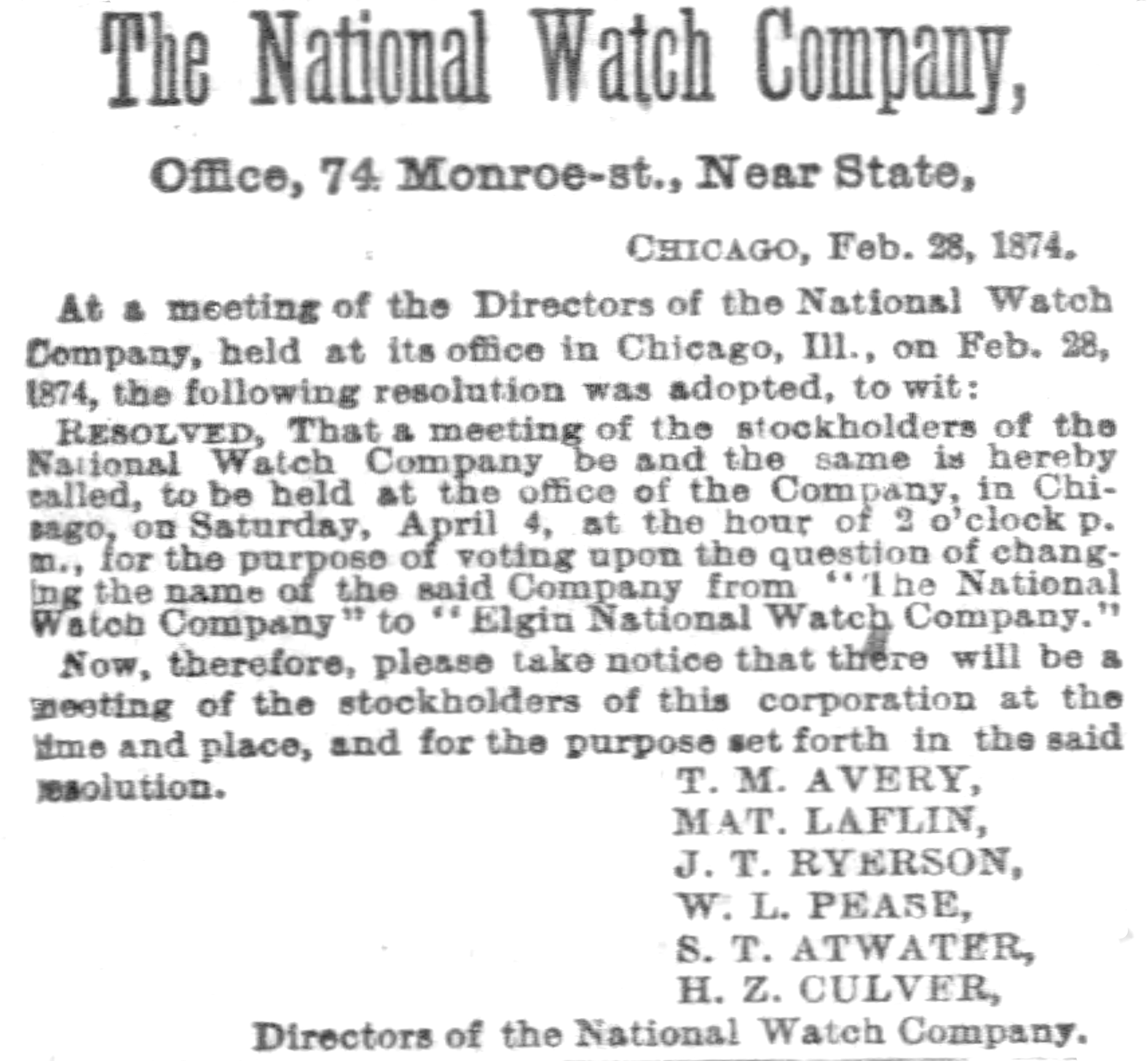 The National (Elgin) Watch Co.1
The upper portion of this building will be occupied by the National Watch Company of Elgin, Ill., for their offices and sales rooms. A brief outline of the progress of this company and the industry they represent, will therefore not be out of place here. It is now only twenty years since the first idea of starting a watch factory was considered to be the dream of a lunatic, and yet to day we find two large factories in New Jersey, three in Massachusetts, and the Elgin, in Illinois, originated in 1867, with a capital of $100,000, subsequently increased until the amount now reaches $1,000,000, and furnishing employment upwards of five hundred and fifty hands. The buildings at Elgin front 240 feet, with several wings. The grounds are tastefully laid out; the calm repose of the general exterior scarcely portraying the busy hum that is going on inside., where one thousand watches are being completed each week, in sixteen different styles, mostly called after the officers and stockholders of the company, viz.: The “B.W. Raymond,” the H.Z. Culver,” the “H.H. Taylor,” the “M.D. Ogden,” the “W.H. Ferry,” the J.T. Ryerson,” the “Matt. Laflin,” the “Chas. Fargo,” the “J.V. Farwell,” the “Gail Borden,” etc. The watches of this company are certified by the General Superintendents of the following railroads: The Erie Railway, the Chicago & Northwestern Railway, the Union Pacific Railroad, the Chicago & Alton Railroad, the Lake Shore & Michigan Southern Railroad, the Michigan Central Railroad, the Hudson River Railroad, the Wisconsin & St. Paul Railroad, together withe all the Express companies. Then following testimony from Mr. James C. Watson, the very highest authority, is of itself sufficient proof that Illinois has achieved a great success in point of perfection in the manufacture of watches.

In 1873 the company will place in the market stem winders, thus keeping up with the requirements of the day. The company have spared no expense on machinery, and every week introduces some new piece of mechanism in some department or another—one time in the escapement and jeweling department, and another time in the tool shop. Some idea of the nicety of the machinery can be had by the following example in the screw and steel department. Here are machines which will cut screws five hundred threads to the inch. The finest used in the watch have two hundred and fifty. Even these threads are invisible to the naked eye, and it takes one hundred and forty-four thousand of these screws to weigh a pound. A pound of them is worth six pounds of pure gold. Lay one upon a piece of white paper, and it looks like the tiniest steel-filing. Only by placing it under a string magnifier can we detect its threads, and see that it is as shining as a mirror, and as true and perfect as the driving wheel of a locomotive.

Screws for the best compensation-balance are of gold. A ten dollar piece will furnish material for six hundred and fifty of them. This department, perfect as it is, feebly outlines the details of the other and more important branches. We regret we do not have space to deal with the full details of this great industry, as seen in Elgin.

The offices of this company, in the new American Merchants’ Union Express Company’s building, will be substantially and comfortably fitted up. The location is an enviable one, and when quartered they will be better housed than in their old location before the fire.

The American Express Company will remove tomorrow from its present quarters to its magnificent new building, Nos. 72. 74, and 76 Monroe street, between State and Dearborn streets. 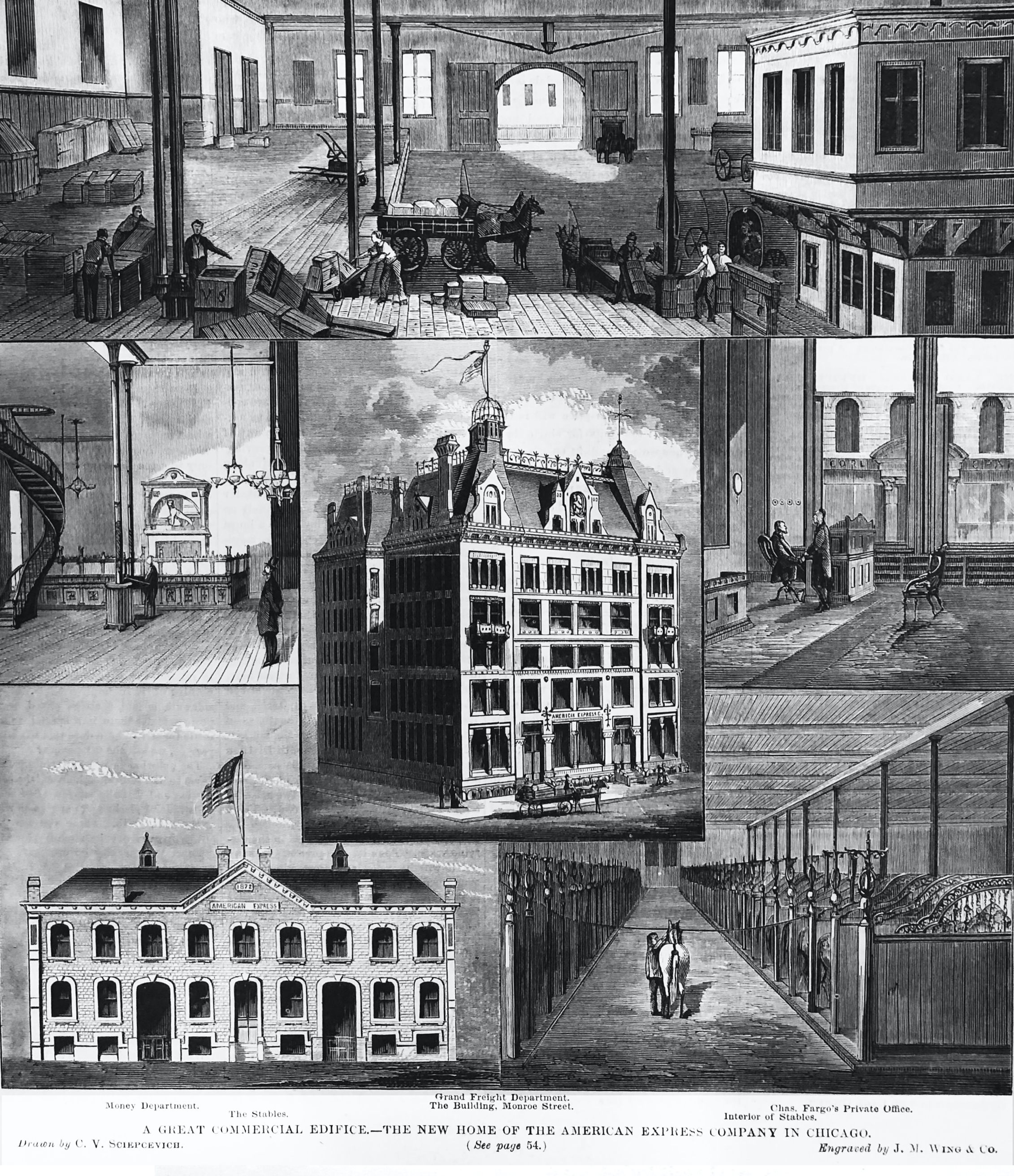 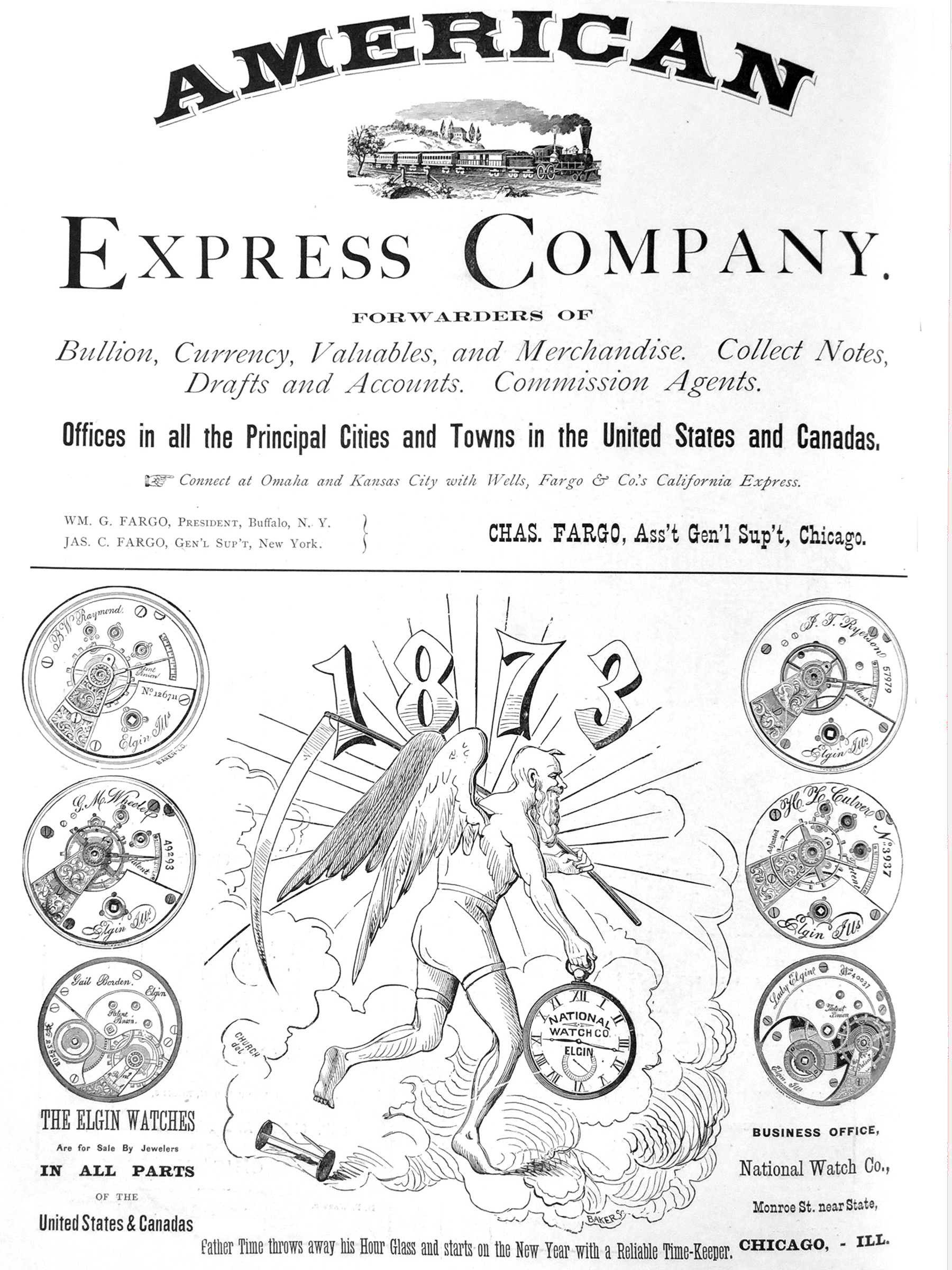 Advertisement from Merchants and Manufacturers, 1873 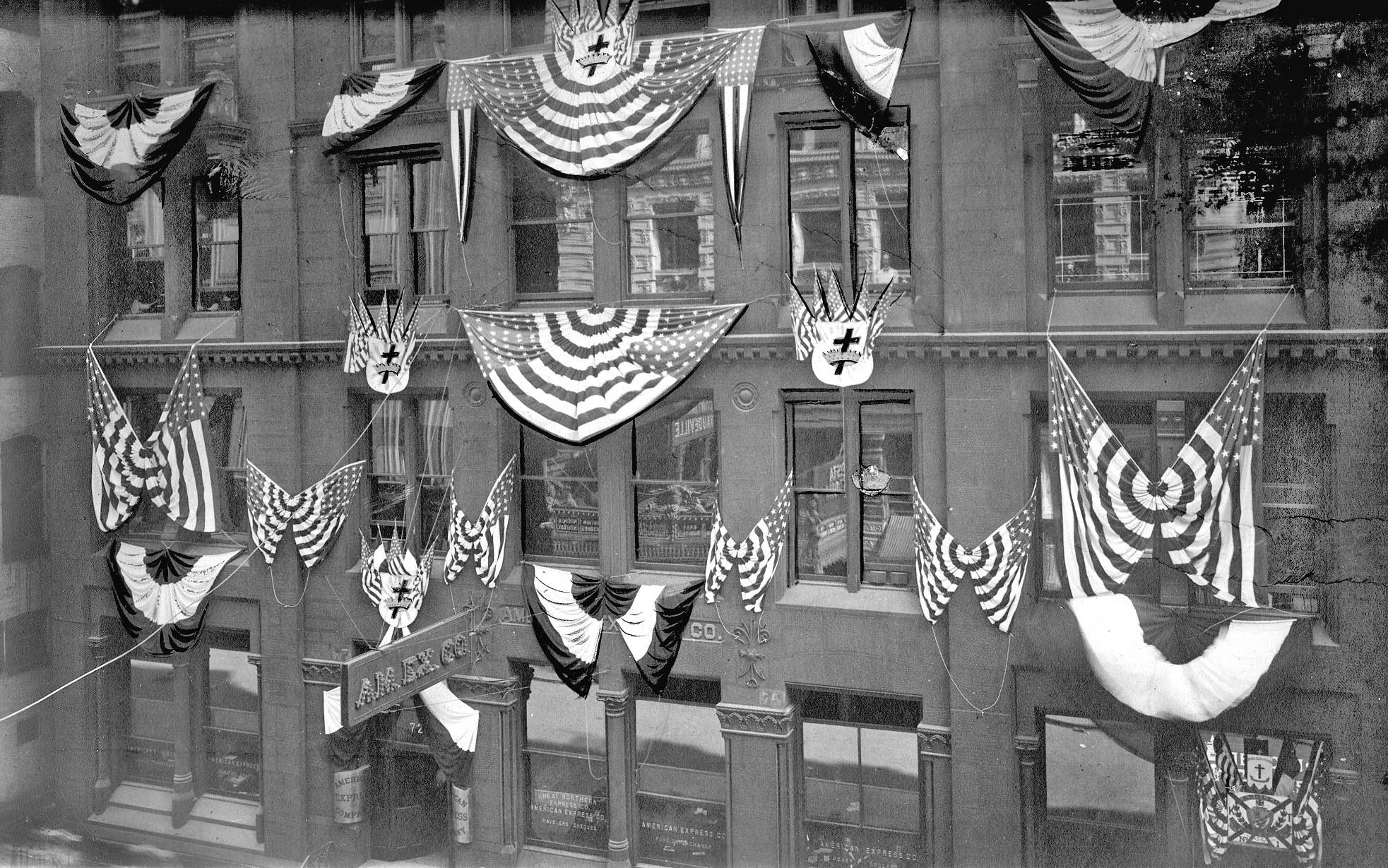 American Express Building dressed for the 1910 Triennial Grand Encampment of Knights Templar of the U.S.A. 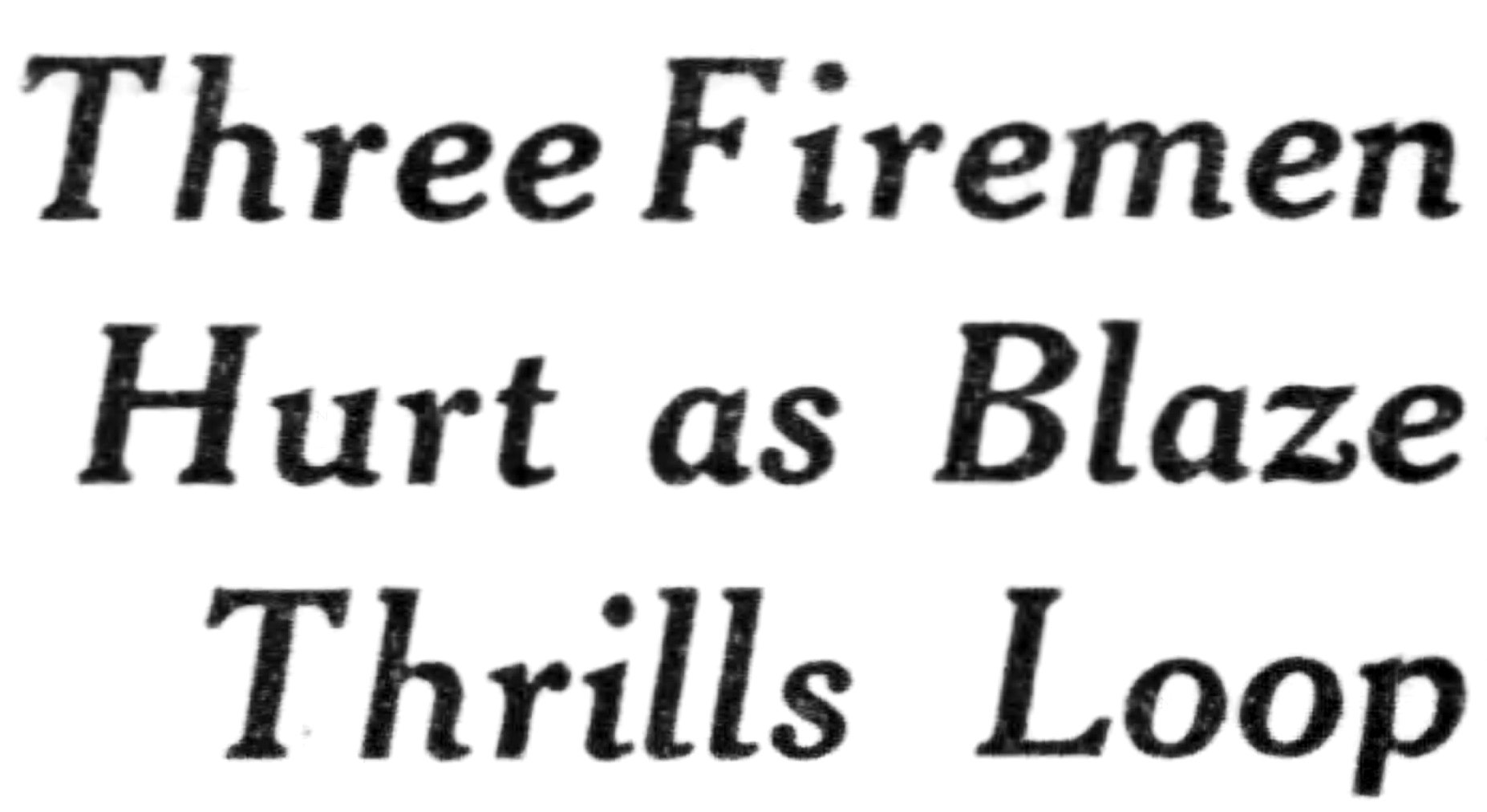 Three firemen and a policeman were injured in a spectacular fire that broke out early this morning in the upper floors of the old seven story American Express company building, a loop landmark, at 23 West Monroe street. The flames, shooting high into the sky and threatening department stores and other structures in the block, attracted a throng of spectators who massed in State and Dearborn streets. Fire Marshall Corrigan estimated the damage at $50,000.

Within a few minutes of the first alarm, a 4-11 alarm was sounded and firemen swarmed up fire escapes of the Guardian National bank building on the west and the Fair store on the south to pour streams of water into the blazing building, which has been untenanted for some time.

Fireman Cut by Glass.
An explosion blew out the windows on the Monroe street side and the flying glass cut Fireman Joseph Daniels of Truck 2, who was handling a hose line in the street below.

Lieut. Arthur Quail and Fireman Robert Hughes, both of Truck 1, were also cut about the face by fragments of glass. Policeman Daniel Danaher, patrolling the alley at the rear of the building, was struck and bruised by falling debris. All four were treated by a physician and returned to their duties. 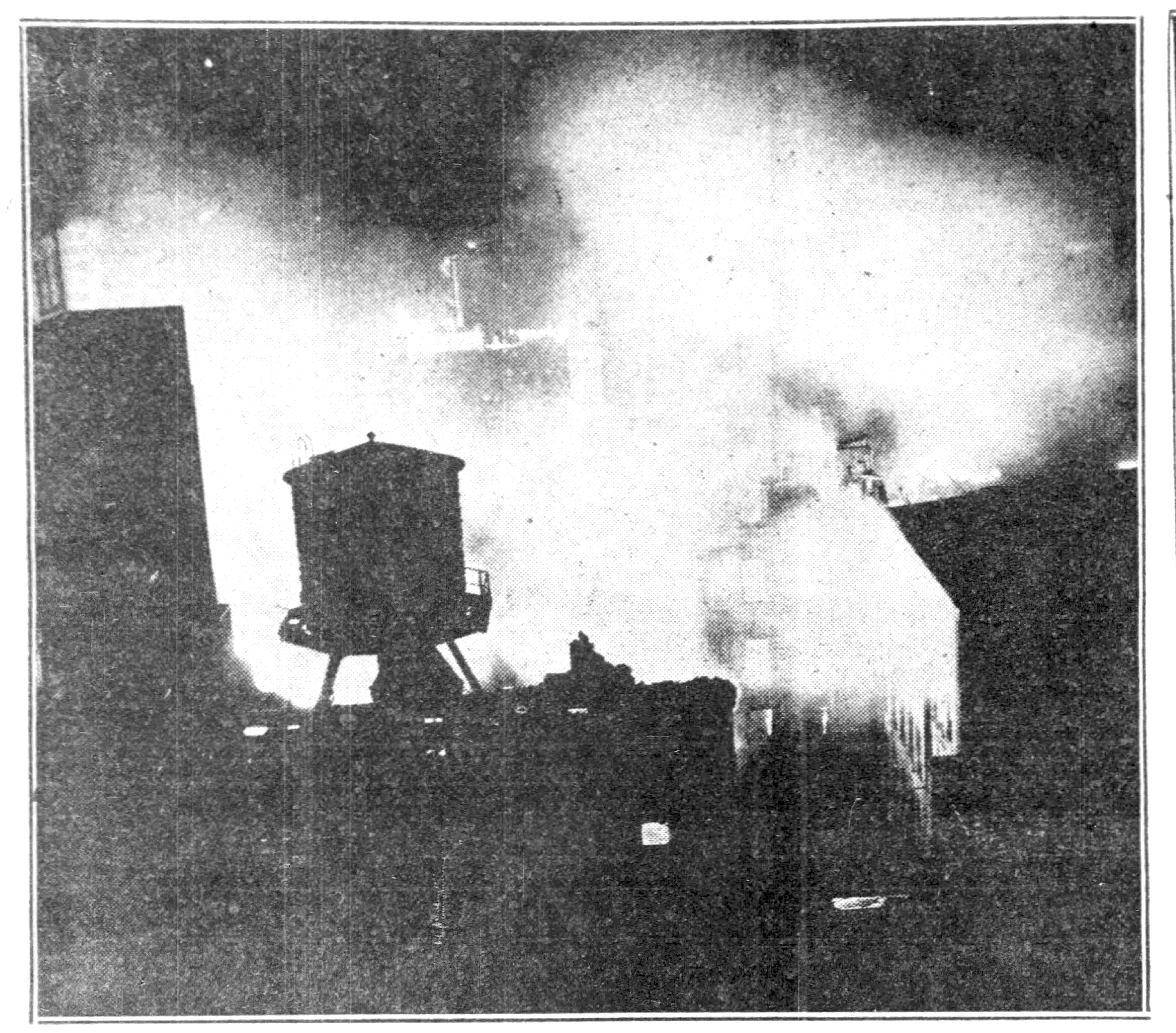 FIRE AT WHICH FOUR WERE INJURED DRAWS CROWD TO LOOP DISTRICT.
General view of the blaze in the American Express company’s old building at 23 West Monore street, across from the Majestic theater, as it appeared from neighboring structure.

Weakened Walls Fall.
Soon afterward the upper floors of the burning building, weakened by the fire last Christmas, collapsed and parts of the roof and sections of the east and south walls fell in. Twenty-five firemen working on the first floor narrowly escaped injury when the mass of bricks, timbers, and flooring came plunging down through the center of the building. Marshal Corrigan said that all escaped unhurt.

Three water towers were brought into play and shot their streams into the flames from Monroe and Dearborn streets. Crowds watched from the windows of the Palmer house across State street as other firemen poured water into the blaze and drenched the sides of threatened buildings. 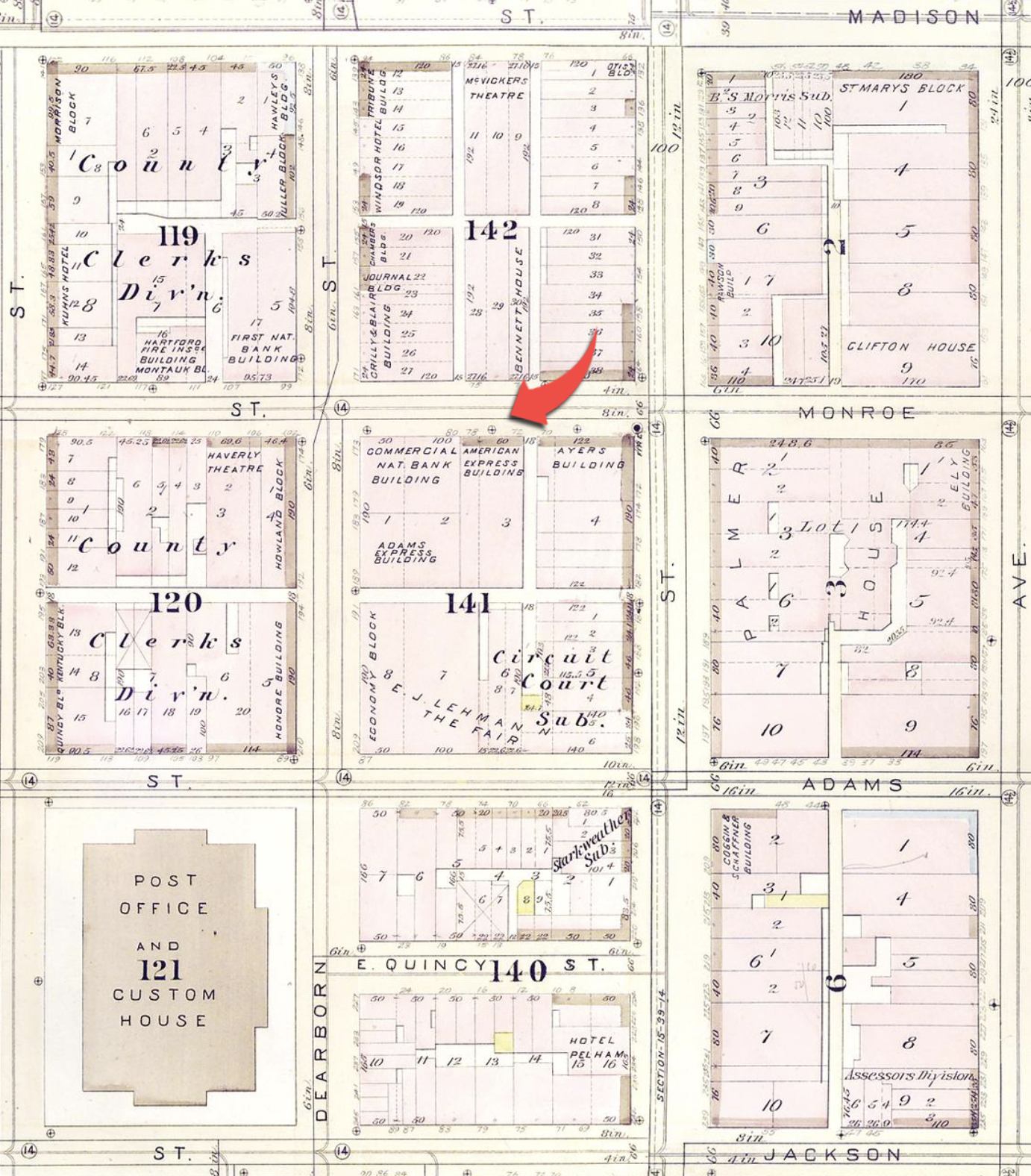