REBUILT CHICAGO.—NEW EDIFICES IN THE BURNT DISTRICT.—THE PORTLAND BLOCK.
Thuis elegant structure, not yet entirely completed, stands at the south-east corner of Dearborn and Washington streets, on the site of the old block of the same name. It is one of the grandest and most imposing business palaces in our new Chicago. The original design was for an eight story building, and arrangements have been made for its early completion. The style of architecture is the English commercial gothic, with a very conveniently arranged interior. The owner is Mr. Peter C. Brooks, of Boston, and the architect is W. L. B. Jenny, Esq., of this city.

This building is leased to first-class tenants, among whom we may mention the following:

THE THIRD NATIONAL BANK.
This staunch monetary institution occupies the main corner banking room, where it has probably the finest fitted up and best appointed banking house in the country. The counters are of polished wood inlaid, with artificial tiles and variegated marbles, in conformity with designs drawn by Mr. Jenny. In the arrangements of the bank, its working departments have been carefully studied, and the economy is complete.

NATIONAL BANK OF ILLINOIS.
The Portland Block also has another of our prominent financial institutions, the National Bank of Illinois, which has a capital of $600,000, and enjoys a large, valuable and constantly growing business. Its office appointments in the Portland Block are complete and arranged with taste and care.

BRADSTREET’S COMMERCIAL AGENCY.
The Mercantile Agency of J. M. Bradstreet & Son, who occupy a very large and beautifully furnished office in this building, has been established for many years, each succeeding year adding to its utility and efficiency. It has its headquarters in the city of New York, and its branches are found in every part of this continent, and also in Europe. Each branch is in charge of a superintendent, appointed by and under the direction of the home-office. The agency has a very large and valuable printing and publishing establishment of its own, where all its books and the most of its printing are done under careful supervision, thus securing correctness and dispatch. The increasing business of the house, the very large number of its employees, the incessant traveling required and never intermitted, the immense corps of correspondents, with all the incidental outlay, cause an expenditure not imagined by those unacquainted with the details of the business. The necessity of such an agency is proved by the fact there is scarcely a house of any size who are not patrons, and the increasing business of the country enhances the value of such an institution.

With the fine accommodations and beautiful surroundings of the office in our own city, we bespeak for it a liberal patronage from every business house whose constantly increasing business demands such safeguards as this agency can furnish. In point of equipment, light, convenience and beauty, the office on the Portland Block is not surpassed by any office of any kind in the city, as a visit to it, which will be always agreeable to its officers, will satisfy every one.

AMERICAN EXPRESS AND AGENCY IN EUROPE.
The basement office No. 72 is occupied by the Chicago branch of the “Express and Agency Co., of London,” a general American agency established in London, with branches in the leading capitals of Europe and the principal cities of this country. It has three departments,—a Traveler’s Agency, which renders every possible assistance to Americans visiting Europe,—an Express Agency, which forwards goods and baggage all over Europe and across the Atlantic.—and a Financial Agency, which negotiates loans and the purchase and sale of all standard securities, and procures or cashes letters of credit, exchange, etc. The Chicago agency is managed by Mr. Jas. H. Dowland, a well-known resident of this city.

OLLINGER & BALLARD
The corner office of the basement is occupied by this staunch real estate house, who have been in business here five years. Their office is finely fitted up and perfectly adapted to their large land trade. They represent a large number of non-resident capitalists, whose interests have always been safe in their house.

J.C. McCORD & Co.
This firm also occupy one of the basement offices on the Dearborn side of the Portland Block, where they have a fine and well arranged office. This firm, composed entirely of energetic young men—and it is young men who are building up the West to-day—have been in business for several years, and possess ample capital. Mr. J. C. McCord has erected a block of eight houses on Langley avenue, worth $100,000, which he now offers for sale.

C. R. FIELD & CO.
This energetic firm have a splendid office in the Portland Block, as will be seen be reference to the illustration. It is a house too well known in the country to need much comment at our hands. 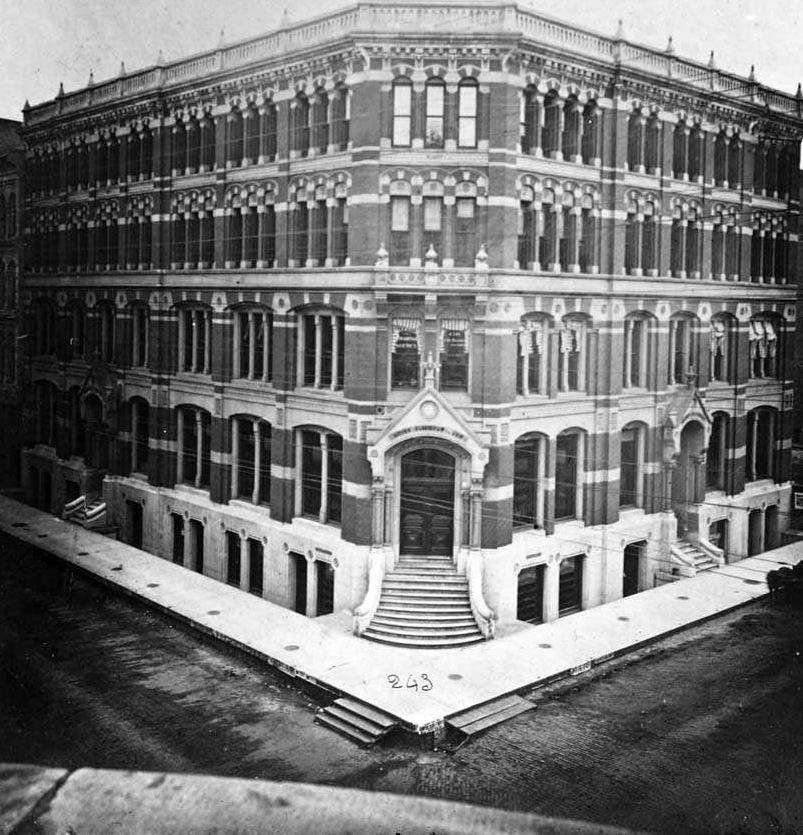 Fronts 75 feet on Dearborn and 100 feet on Washington Street, at the southeast corner. It is an old-style brick building with somewhat eccentric architectural treatment of materials. There are 6 stories and basement, 65 offices, and 2 passenger elevators. The occupants are bankers, attorneys, agents, and architects. The Portland was rebuilt in 1873, and remodeled in 1885. Its height is 80 feet. 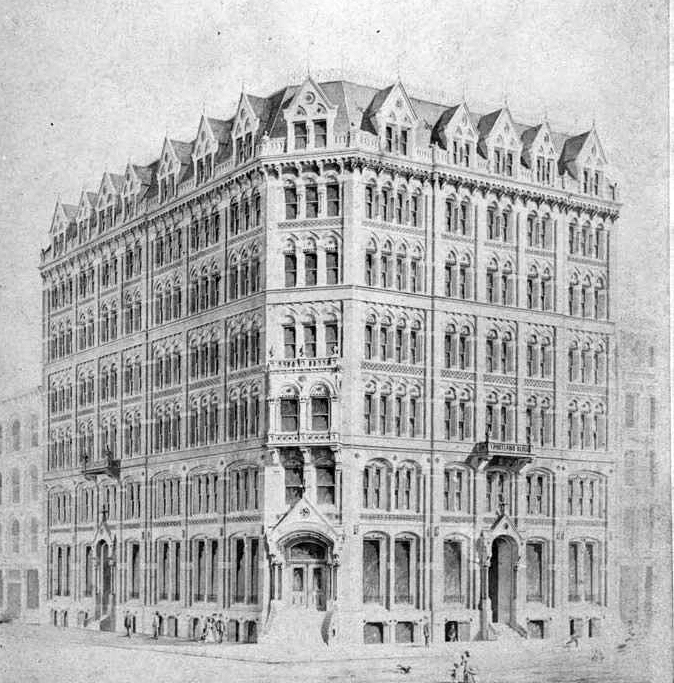 The John Marshall Law School officially opened in the building on Wednesday, September 20, 1899; and day classes commenced on October 2, 1899. Evening classes were instituted as early as October 10 of the same year.

Richard W. Sears, one of the founders of Sears, Roebuck & Co., bought the Portland block in 1900 for one million dollars from D. Percy Morgan, one of the firm of Ennoch Morgan’s Sons. makers of Sapolio. The property, which fronts 120 feet on Washington ond 90 feet on Dearborn, is now owned by Mrs. Anna L. Sears, widow of R. W. Sears. For years it ranked as one of the city’s best known office buildings, with an imposing list of tenants.

Recently it was found that the tax problem had to be solved some way and it was decided that wrecking the building would be the solution. It has not been decided yet whether to lease the cleared space for a parking station or erect a low “tax payer” of one, two, or possibly three stories, according to John R. Magill, agent for the building.

The latest down town wrecking project is the old Portland block, at the southeast corner of Washington and Dearborn. This was built shortly after the fire and for many years ranked as one of the city’s lending office buildings. High taxes have convinced the owners that it will be cheaper to wreck it and lease the site for parking or perhaps erect a “taxpayer.”