Henry H. Shufeldt & Co. was established at the rectifying house at Kinzie & Cass Sts in 1857.

The Peoria Whisky Trust
In 1881, Joseph Benedict Greenhut built the Great Western Distillery in Peoria, Illinois. The production of whisky and neutral spirits was booming in Peoria and each new distillery was bigger than the last and, therefore, the biggest distillery in the world.

Six years later, Great Western and 65 other distilleries merged to form the Distillers & Cattle Feeders’ Trust. Popularly known as the Whisky Trust, Greenhut became its president. The Trust used its resources to buy more distilleries, many of which it closed. The idea of the Trust was to limit production industry-wide to reduce competition and protect profits. Although the Trust was technically legal (it would be considered as price-fixing today), it engaged in many illegal activities including the intimidation of distillery owners who did not want to sell. Shufeldt & Company became famous as a target of the Whisky Trust, which it eventually joined in 1892. 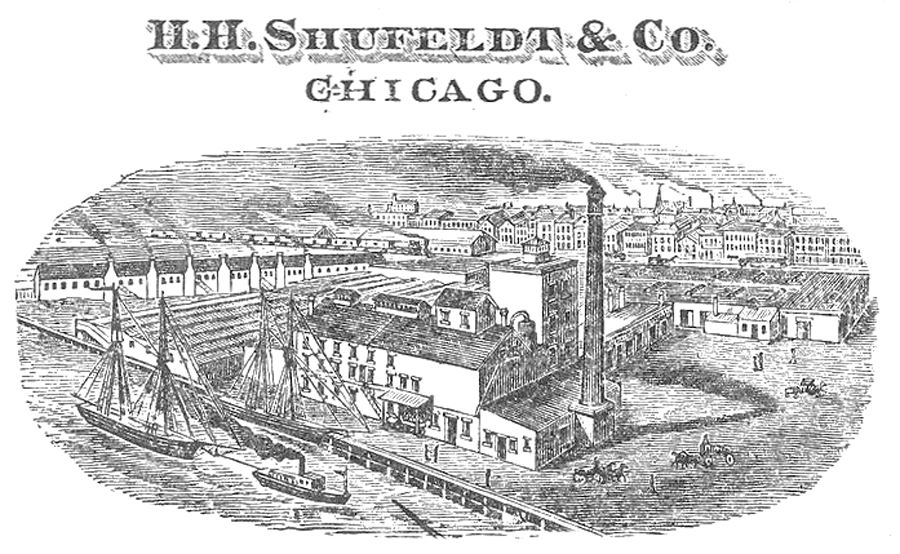 GENTLEMEN: It is now some twenty years since we commenced the distillation of our justly celebrated Imperial Gin, and its companion, the Rye Malt Gin. We have exhausted every means to produce a pure and wholesome article, and have met with merited success. We have spent large sums in advertising them, and have created an increasing demand that has benefited our customers. We intend continuing this course, and have about completed a pamphlet setting forth their merits and advocating their purity. This pamphlet we intend sending to every retail dealer in the land, druggists included. Our object is to call the attention of the trade nearest the consumer to our gins, and thus create a demand on our wholesale customers for the articles. In the course of our remarks we distinctly state, several times, that we deal only with the wholesale trade. We deem it prudent to thus notify you of the publication and distribution of this pamphlet, not only to show you that we are advertising our goods, and thus creating a demand, but also that you may not misconstrue our motives and imagine we are courting the retail trade.

Messrs. Shufeldt & Co. have recently sold several lots of their gins to foreign merchants, and exported the same to them. We hope to see the exportation of gin become a permanent feature of the Western distilling interests, the same as rum is of the distillers of New England.

Henry H. Shufeldt & Co.
THE progress that the house of Henry H. Shufeldt & Co. has made in the manufacture and sale of gin is one of the most remarkable features in the development of the spirit trade in this country. A few years ago the consumption of domestic gin was carried on only in a very small, and in fact somewhat surreptitious sort of a way; but this firm have pushed their gins so far to the front, that not only does their home consumption far exceed the shipment to this country of any foreign distiller, but they are beginning to find a market in other countries, in competition with the Dutch and English products. They have recently made several large shipments to the West Indies, and every one who is familiar with the gin trade in those countries must see that, with the grain of Chicago at their back, they must soon have the gin market of Cuba and the other islands at their mercy.

A certificate concerning’the purity of the goods, given by Professor McMurtrie, who occupies the the Chair of Chemistry in the Industrial University of Illinois,will be found in the announcement in our advertising columns. Prof. McMurtrie is well known to the trade on account of the various and valuable services he rendered us while he held the position of Chief of the Chemical Department in the Bureau of Agriculture, which he gave up to undertake the duties of his present place. His name is a perfect guarantee for the scientific accuracy of his certificate, although the name of H. H. Shufeldt & Co. is good enough for any statement that may appear under their signature. There is no question about the purity and healthiness of their gins, and their popularity seems to be assured, as they warehoused during the last fiscal year, according to the returns of the Internal Revenue Office, 138,125 gallons. The State of Connecticut was formerly the leading State in the production of gin, but it now returns only 69,315 gallons. A good idea of the magnitude of the business done by Messrs. H. H. Shufeldt & Co. may be formed by comparing their 138,125 gallons with the total importation of Holland Gin into this country during the year 1883, which amounted to 321,340 gallons in wood, and 11,194 cases. It must not be inferred from this that this is the largest business this house has ever done in gin, for their sales in 1880 were over 143,000 gallons; nor should any one think that their gin trade is the principal part of their business, for their sales of spirits aggregate over three times the whole quantity imported into the United States. 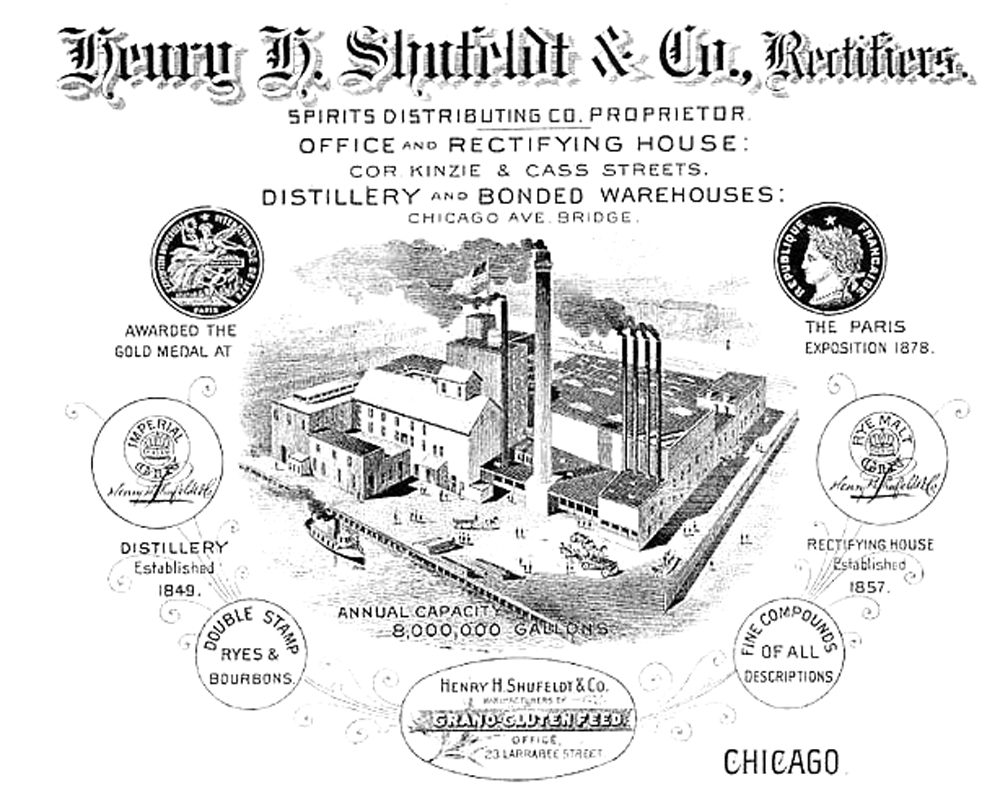 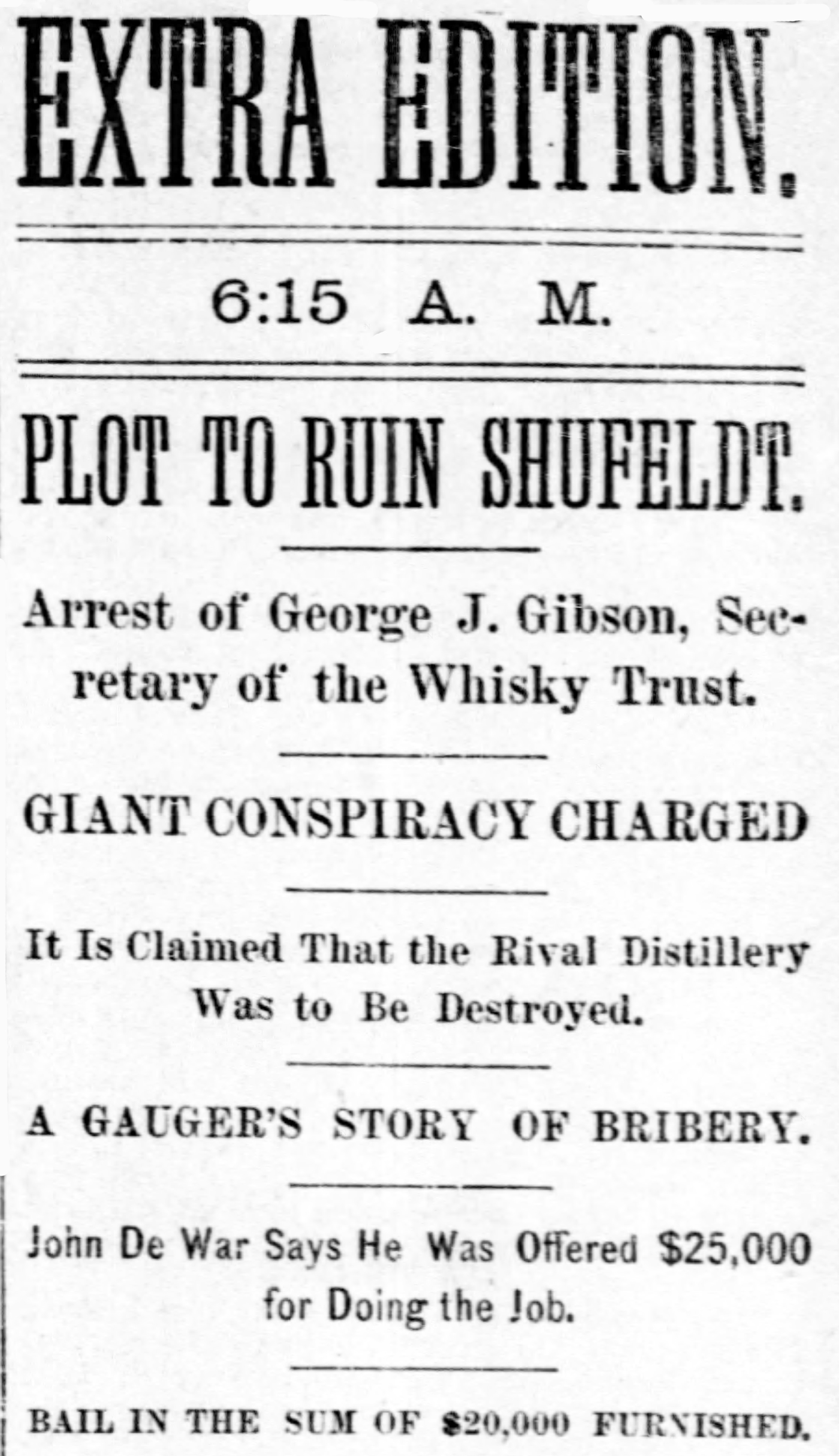 Another attempt was to be made to blow up the plant of the H. H. Shufeldt Distillery company, on Larrabee street, near Chicago avenue, next Saturday night, according to the details of a plot unfolded by the Government secret service yesterday.

When the anti-trust distillery was partially destroyed by dynamite Dec. 10, 1888, it was charged that the Whisky Trust was at the bottom of the conspiracy, the object of which was to rid itself of a dangerous and successful rival. But the investigation came to naught. 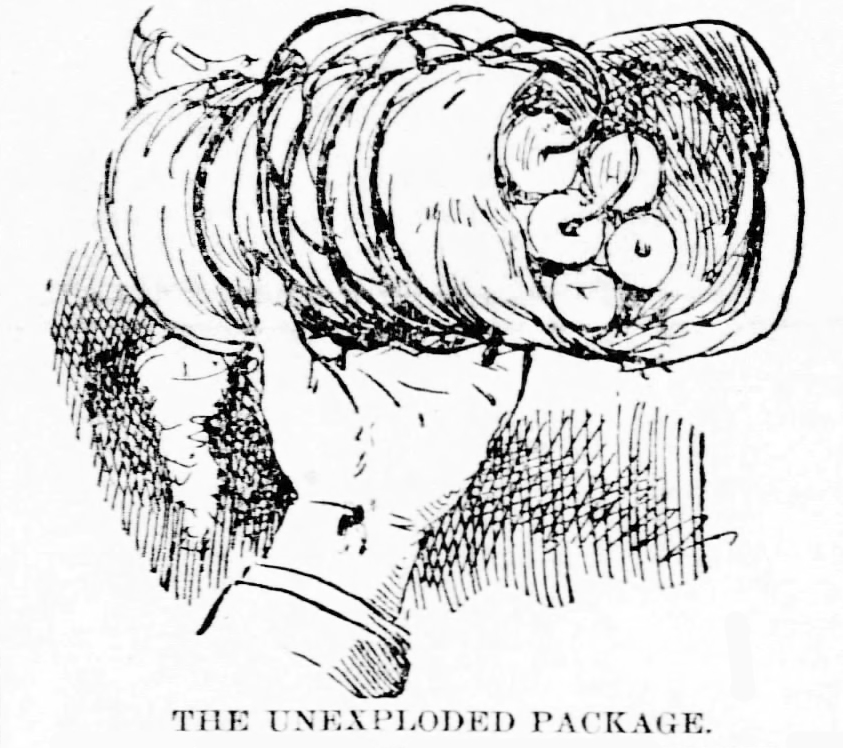 George J. Gibson, Secretary of the Whisky Trust, was arrested early yesterday morning by Inspector Stuart and Chief Deputy United State Marshal Gilman on a complaint sworn out by Special Agents Brooks and Summerville. As Gibson alighted with his wife from the carriage in front of the ladies’ entrance of the Grand Pacific the officers stepped up to him, and, each taking an arm, informed him that he was under arrest. Gilman then read the warrant.

Gibson was carrying a small grip and asked to deposit it in the hotel. The grip, however, the safety of which Mr. Gibson was so solicitous about, was taken in charge of the officers, and its contents were afterwards found to be valuable evidence for the Government. In it were letters and telegrams which have passed between Gibson and the man whom he supposed to be his accomplice. There was also a bottle of stuff having the appearance of Holland gin.

While Mrs. Gibson went to her room in the hotel, Gibson was brought before Commissioner Hoyne. He waived an examination and was held to the Federal grand jury in $20,000 bonds. Attorney J. S. Runnells, whom Gibson sent for, said that he thought Nelson Morris would sign the bail bond. The packer was sent for, and readily consented to be the prisoner’s surety. Gibson immediately went over to the Grand Pacific. 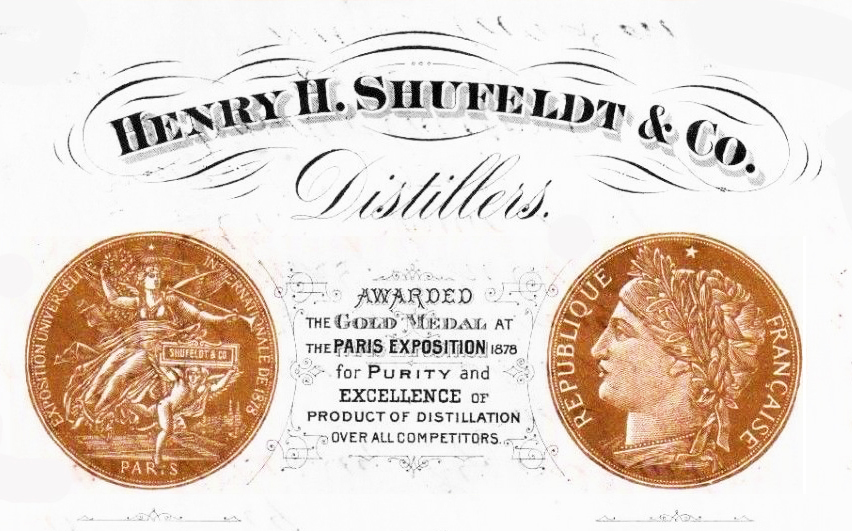 Historical Review of Chicago and Cook County, and Selected Biography, A. N. Waterman, 1908 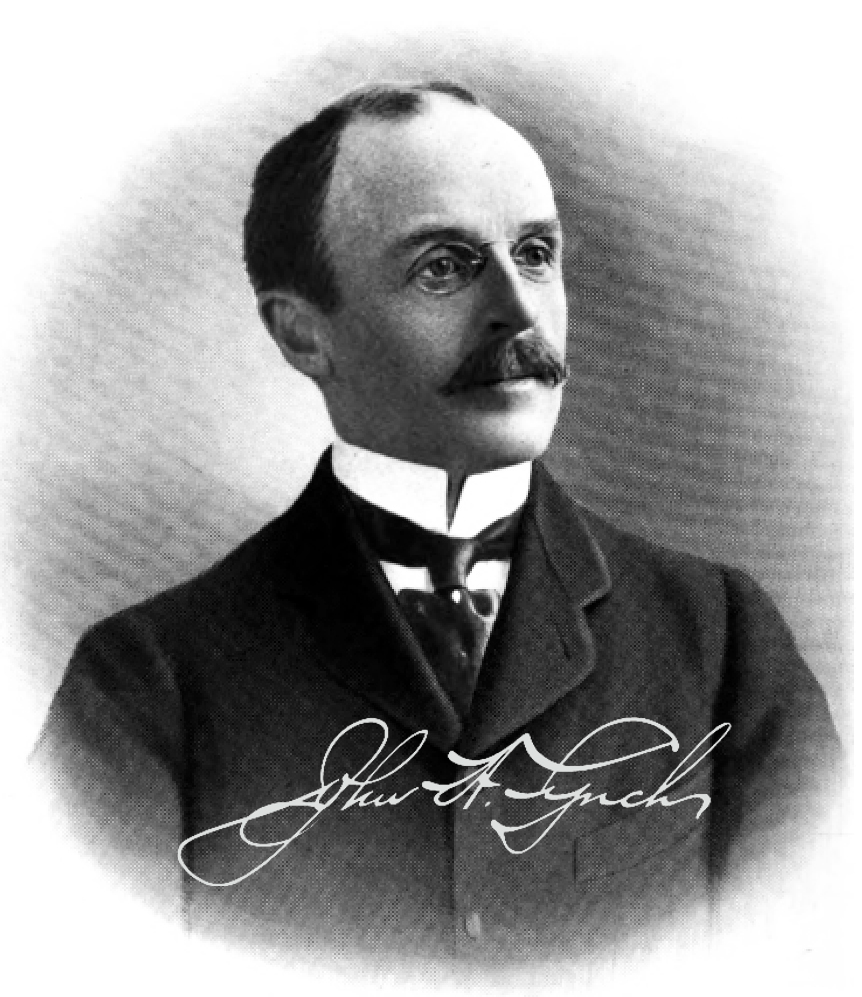 THOMAS LYNCH—Until time laid its restraining finger upon him, Thomas Lynch was one of the “most prominent Irish-American citizens and business men in Chicago,” so comments the Chicago Tribune, upon the occasion of the death of this successful and charitable pioneer, who passed away on the 22nd of September, 1893, after a residence in this city of more than forty-eight years. He was born in Ireland sixty-seven years before, and at the age of nineteen came to Chicago where he became connected with one of the old-time distilleries known as the Crosby distillery. He finally came into possession of this establishment and it was known for years as Thomas Lynch & Co. He afterward formed a partnership with H. H. Shufeldt, and the business was conducted under the name of H. H. Shufeldt & Co., at Larrabee street and Chicago avenue, and for many years was one of the most determined opponents in the west of the whisky trust. This position resulted not only in continuous threats of injury to person and property, but several actual attempts, and at least one successful act of violence.

In 1898 his distillery was blown up by dynamite and badly crippled, but the damage was quickly repaired. Several attempts were also made to burn it, and although no direct proof was ever obtained as to the culpability of the trust in these lawless acts, this continued succession of misfortunes was at least quite suggestive and suspicious. By the final sale of the Shufeldt & Co. distillery to the whisky trust in 1901, the local triumph of the combine was complete. Mr. Lynch insisted to the last that he was not aware, even then, that he was selling to the combine, but that the ostensible purchaser was Lyman J. Gage, of the First National Bank of Chicago. It is stated that the distilling business, with all its trials and losses, brought him something like $1,750,000, and as he left an estate of more than $1,000,000, this is undoubtedly true.

REMOVAL OF WHOLESALE HOUSES.
On the opposite side of Chicago avenue (Sprague, Warner & Co. owns the property on the south side of Chicago avenue) is the Shufeldt distillery property which Montgomery Ward & Co. are said to have purchased, and already the work of tearing out the interior and remodeling the buildings of the old distillery are well under way. This property has lain idle for the past ten years and is admirably located for the purpose for which it is said it will now be used that it is more credible that Montgomery Ward have purchased it. 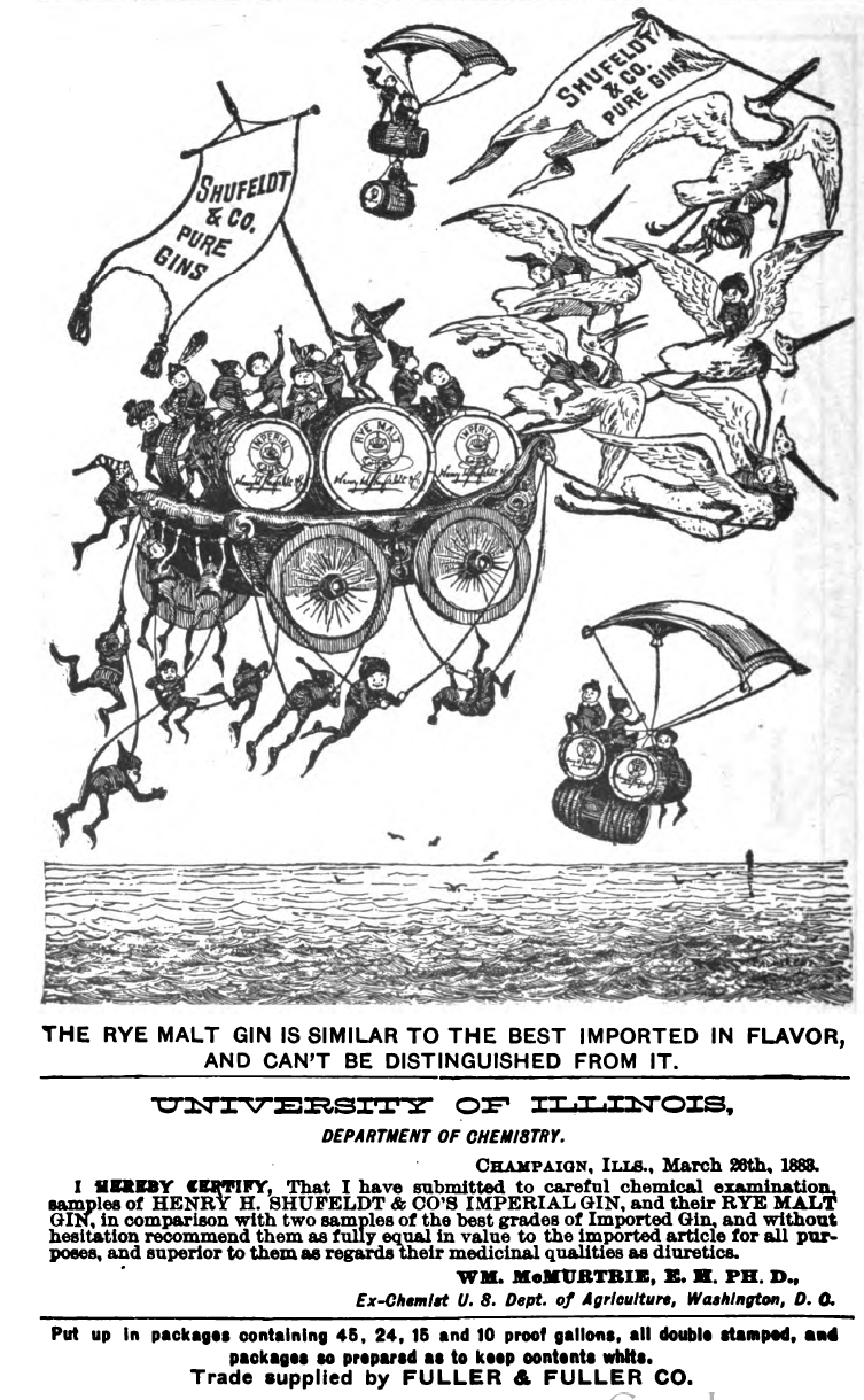 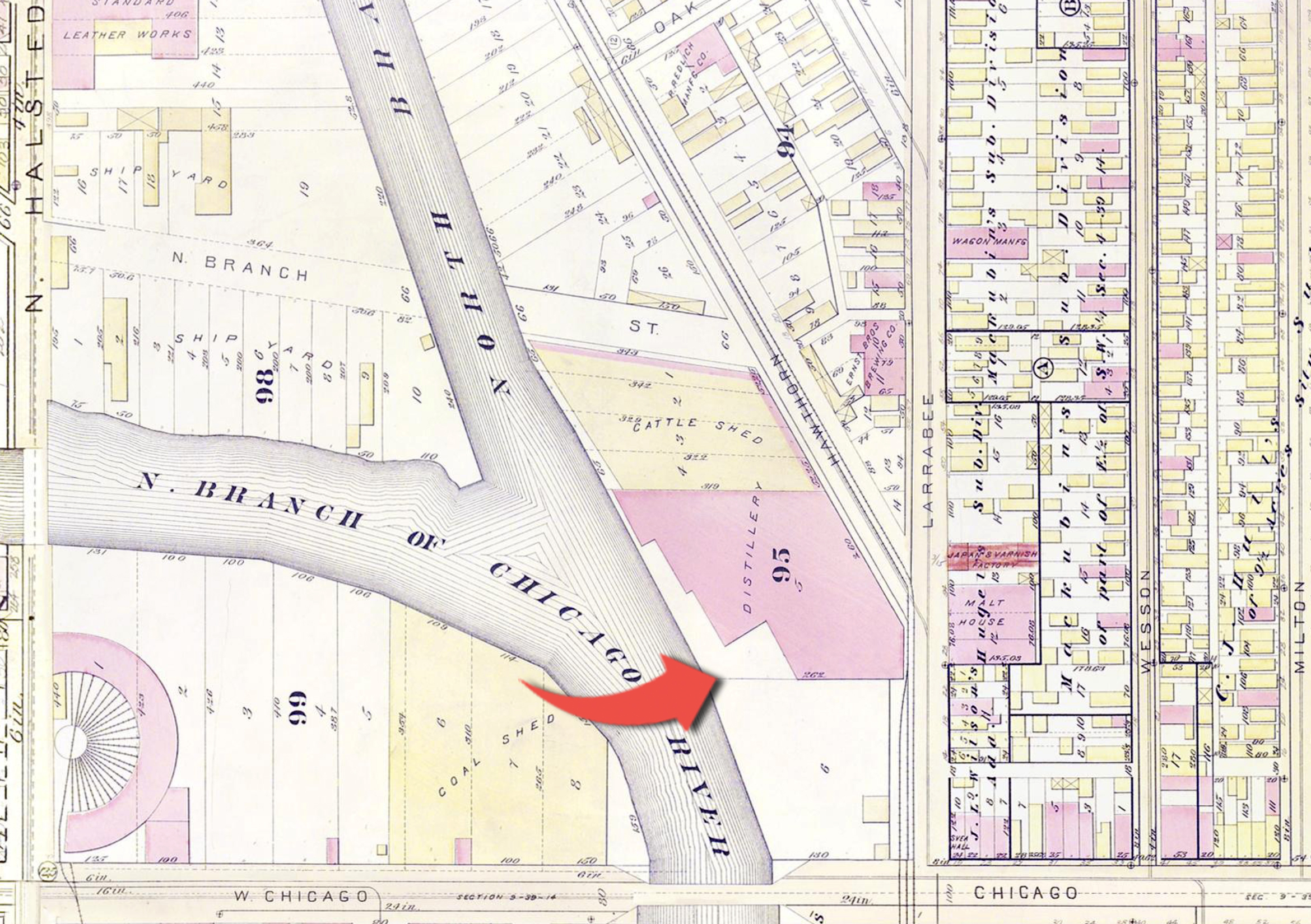