The Bucklen Building was a six-story and one-basement building, on spread foundations, at the southwest corner of S. Michigan avenue and E. Eighth street. Oscar Cobb was the architect. 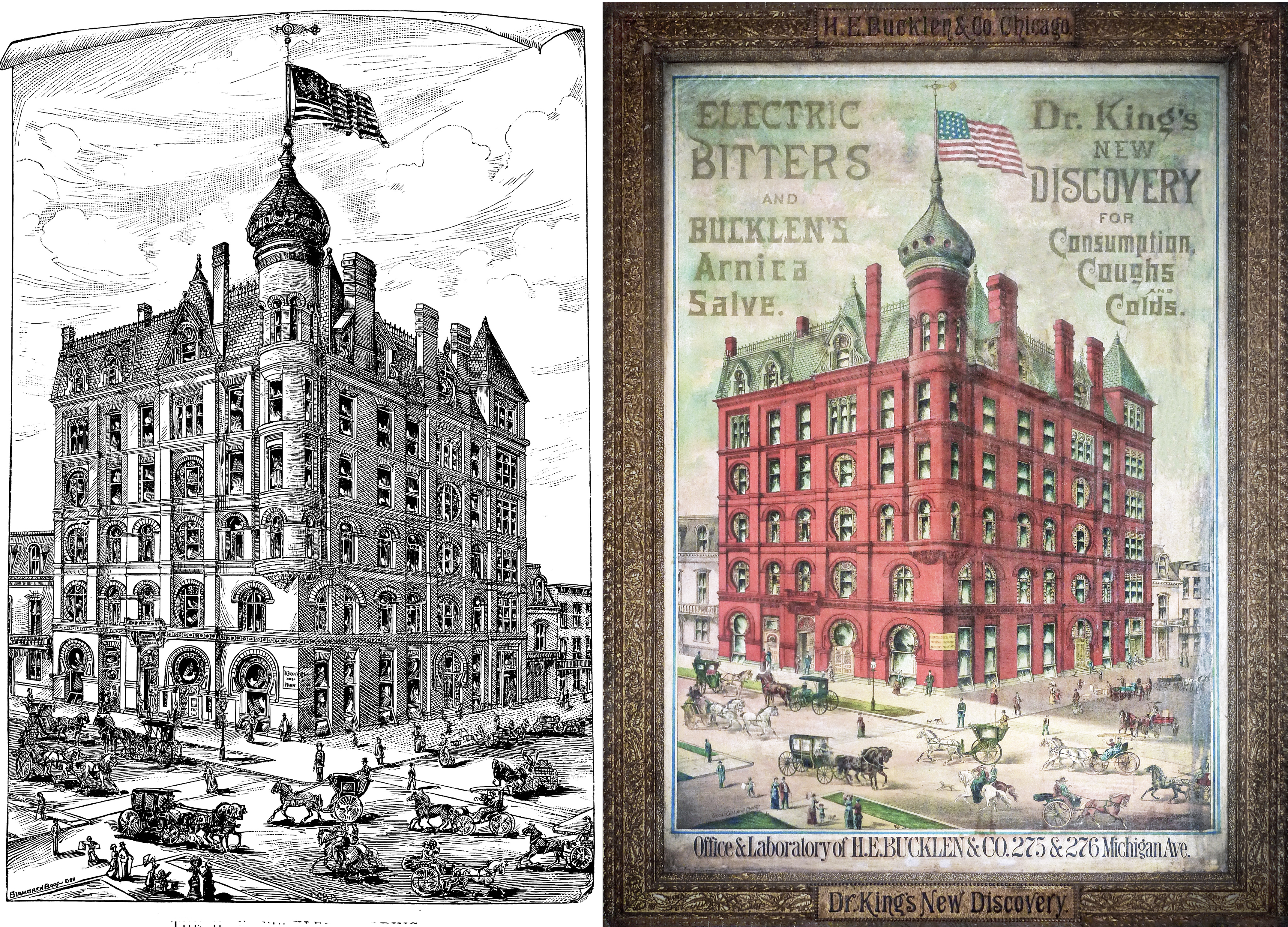 H.E. Bucklen & Company of Chicago were highly successful sellers of a number of well-known brands. Herbert E. Bucklen had purchased the rights to his medicines from one Dr. Z.L. King of Elkhart, Indiana, about 1878 and moved the business from Elkhart to Chicago about 1878-1879. Bucklen spent lavish sums on advertising in all types of media, and created the brand name of “New Discovery”, which had national recognition by 1885. He also had several other top selling medicines including the Electric Bitters and The New Life Pills, introduced in 1880 as a cure for stomach ailments. Products which never sold well were Dr. King’s California Golden Compound. Dr. King’s Hop Cordial, and Dr. Scheeler’s Great German Cure for Consumption 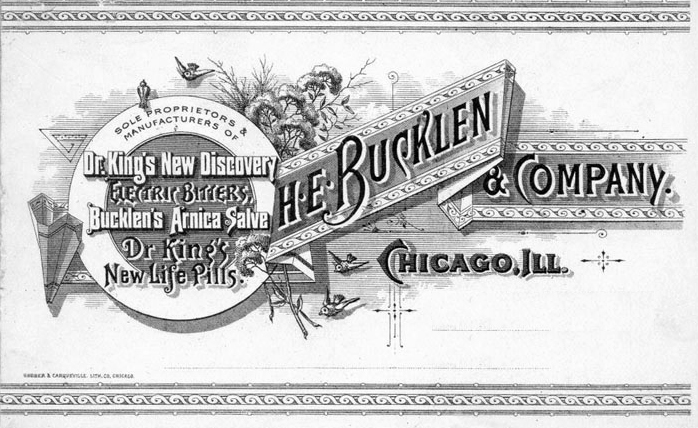 Bucklen’s “New Discovery” was targeted by Samuel Hopkins Adams in his attack on the patent medicine industry in a series of articles in Colliers Magazine in 1905. Of the “New Discovery,” Adams said:

It is proclaimed to be the ‘only sure cure for consumption.’ Further announcement is made that ‘it strikes terror to the doctors.’ As it is a morphine and chloroform mixture, ‘Dr. King’s New discovery for Consumption’ is well calculated to strike terror to the doctors or to any other class or profession, except, perhaps, the undertakers. It is a pretty diabolical concoction to give to anyone, and particularly to a consumptive. The chloroform temporarily allays the cough, thereby checking Nature’s effort to throw off the dead matter from the lungs. the opium drugs the patient into a deceived cheerfulness. The combination is admirably designed to shorten the life of any consumptive who takes it steadily. 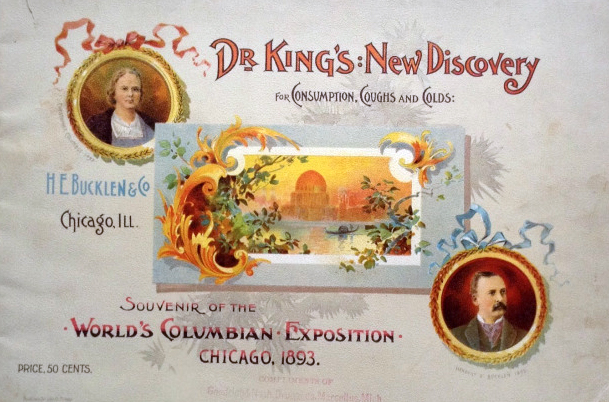 By 1893, the business was well enough established be a major retailer through sites at the World’s Fair in Chicago. This retailing accomplishment was achieved in part by offering for 50 cents a 32 page book, half filled with color lithographs of the world fair buildings, and the other half descriptive text. The advertising contained therein, of the “New Discovery,” made sure that most people who went to the World’s Fair to see the marvels available to them at the end of the 19th century thought of the “New Discovery” as one of those marvels. 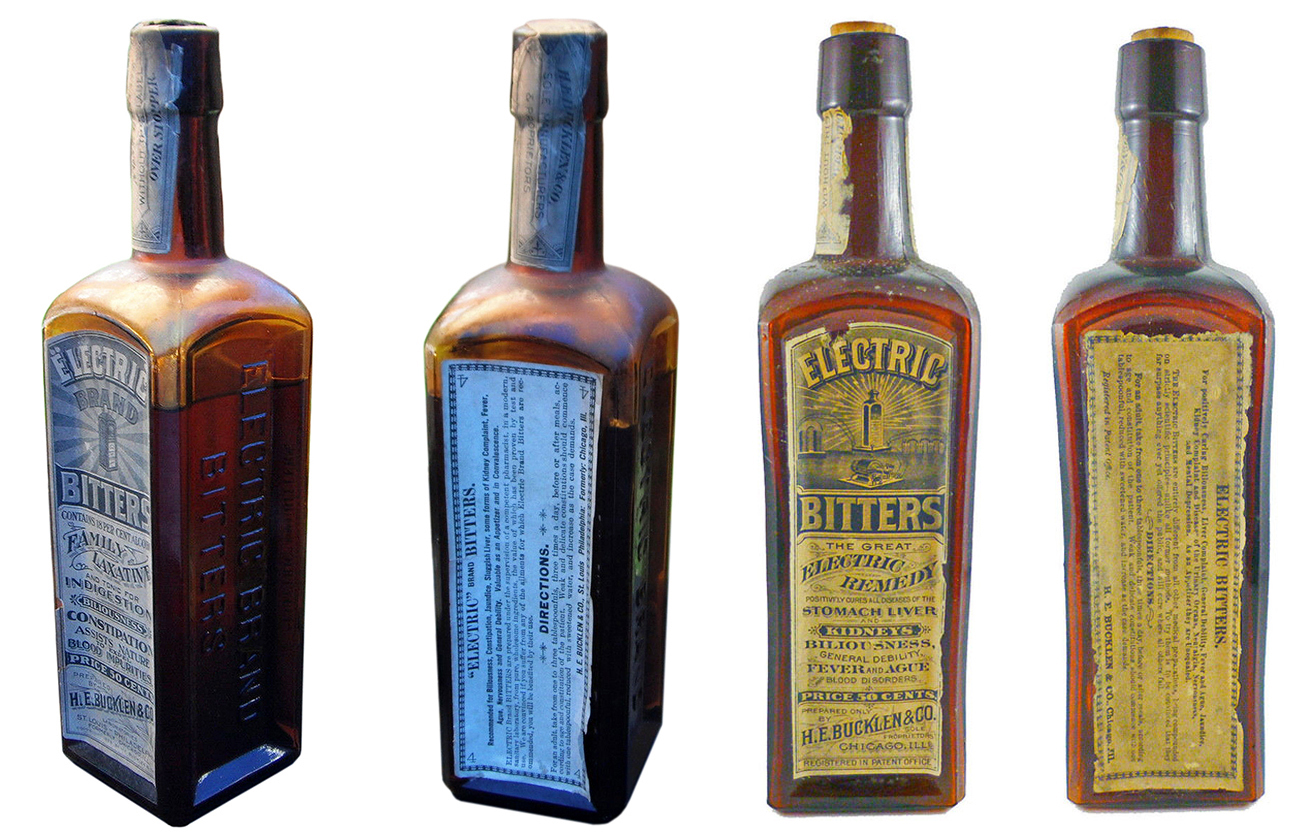 H. E. Bucklen, manufacturer and dealer in patent medicines, was born in Herkimer County, N. Y., on July 19, 1848. His education was completed at the New York State Academy and at Bryant & Stratton’s Commercial College in Chicago. In 1860, he moved to nent houses of Chicago is Bunte Bros. & Spoehr, manufacturing Elkhart, Ind., where he lived and worked for sixteen years, as a druggist’s clerk and a druggist. He came to Chicago in 1877, and was married in the same year to .Miss Bertha E. Redfield, daughter of Hon. George Kecltield, who was State Senator, and State Treasurer for Michigan. They have two children. Mr. Bucklen is the proprietor of four patent medicines in which he does a very large and successful business, Dr. King’s New Discovery for Consumption, Coughs and Colds, Bucklen’s Arnica Salve, Electric Bitters, and Dr. King’s New Life Pills. He also prints a newspaper called The Druggist, devoted to “Health, Business and Science,” to advertise his medicines, and also expends, annually, about one hundred thousand dollars with the leading newspapers all over the United States and Territories, setting forth the excellent qualities of his wonderful remedies. 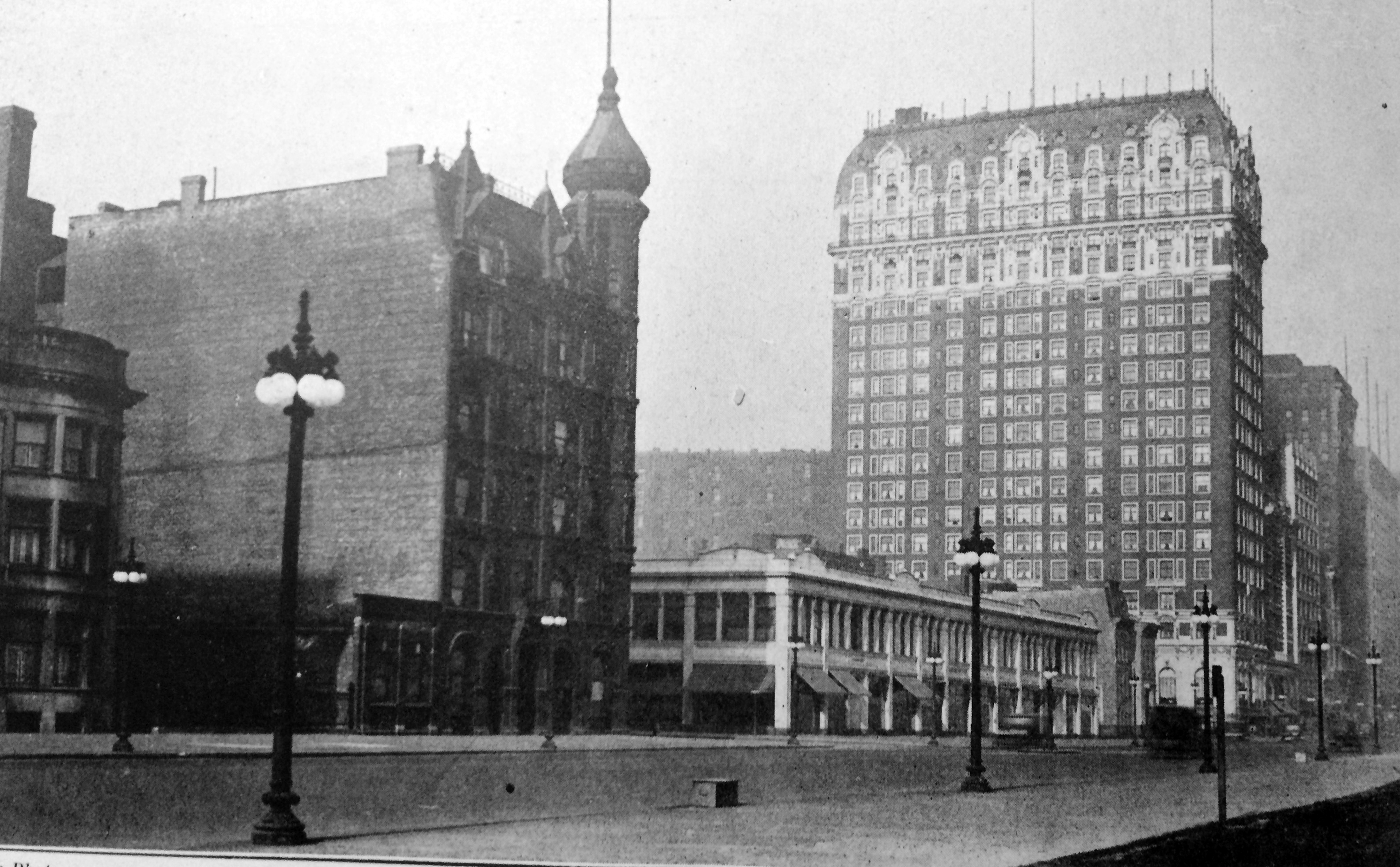 Wreckers yesterday started tearing down what was once Chicago’s finest appartment house, the six story Bucklen building at the southwest corner of Michigan avenue and Eighth street, across from the Stevens hotel. Mounting taxes and falling income were reasons for this action. The Loop Auto Parks, Inc., have leased the site for ten years.

The building was erected in 1888 (sic) by H.E. Bucklen, who made millions with a patent medicine known as Dr. King’s New Discovery and Cough Syrup.” Dr. King was an imaginary person. Mr. Bucklen was the discoverer of the medicine while working in a drug store.

Among the old-time tenants of the Bucklen building, in its day one of the show places of the city, were Mr. and Mrs. Michael (Hinky Dink) Kenna, who lived there for thirty-four years. Mrs. Ella Midgely, widow of William Harwood Midgley, oile expert, had a third floor apartment.

At the time the Bucklen building was erected Chicago was a one-family residence city. Flats were comparatively few and none were luxurious. A six story apartment building was a novelty and the Bucklen’s de luxe appointments soon created comment all over the country. Visitors to the city were taken around to see the building and usually were much impressed by its heighth, its architectural features and the fact that some of the suites, among them the Kennas’, had two bathrooms. 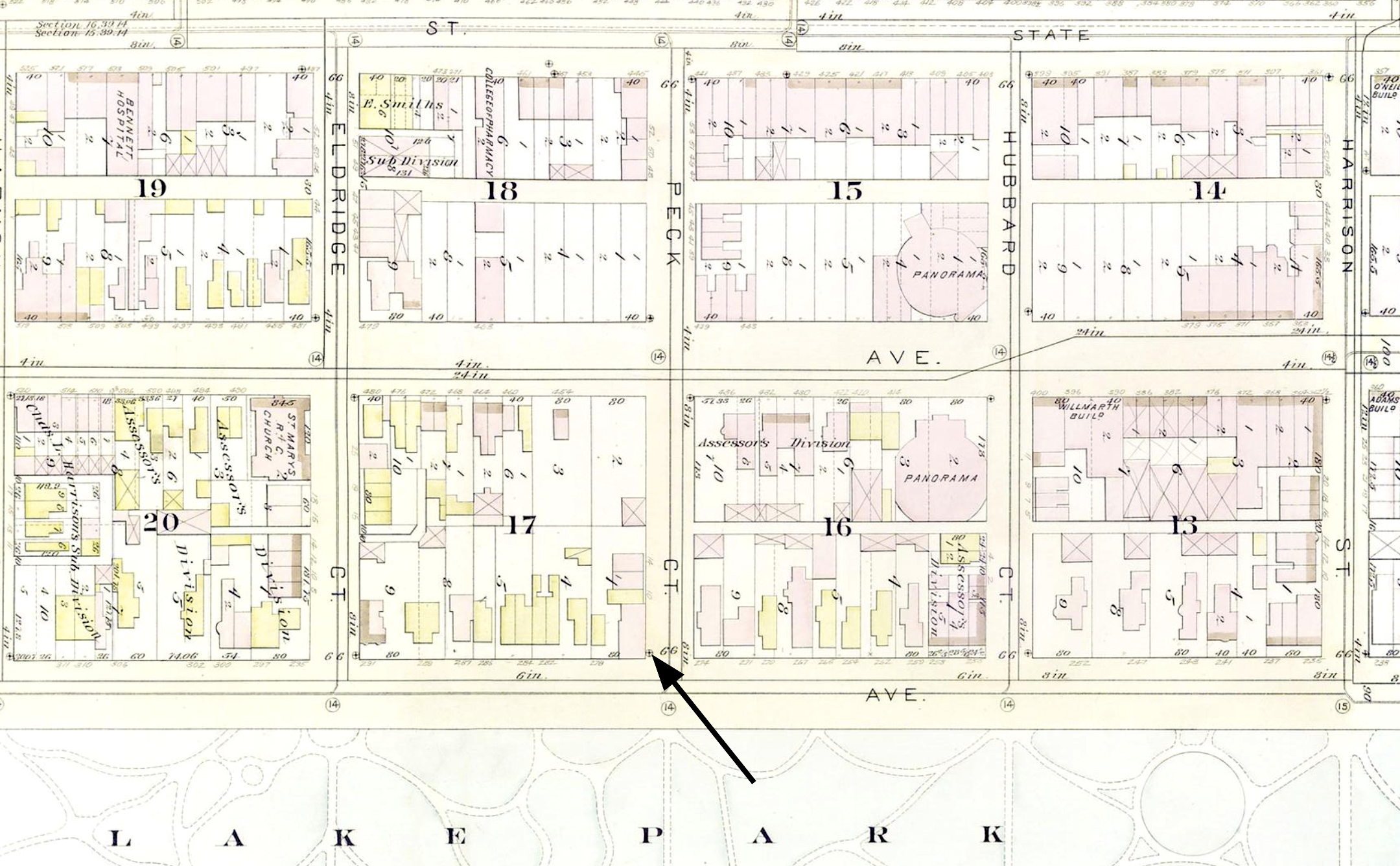