Back to Golden Age 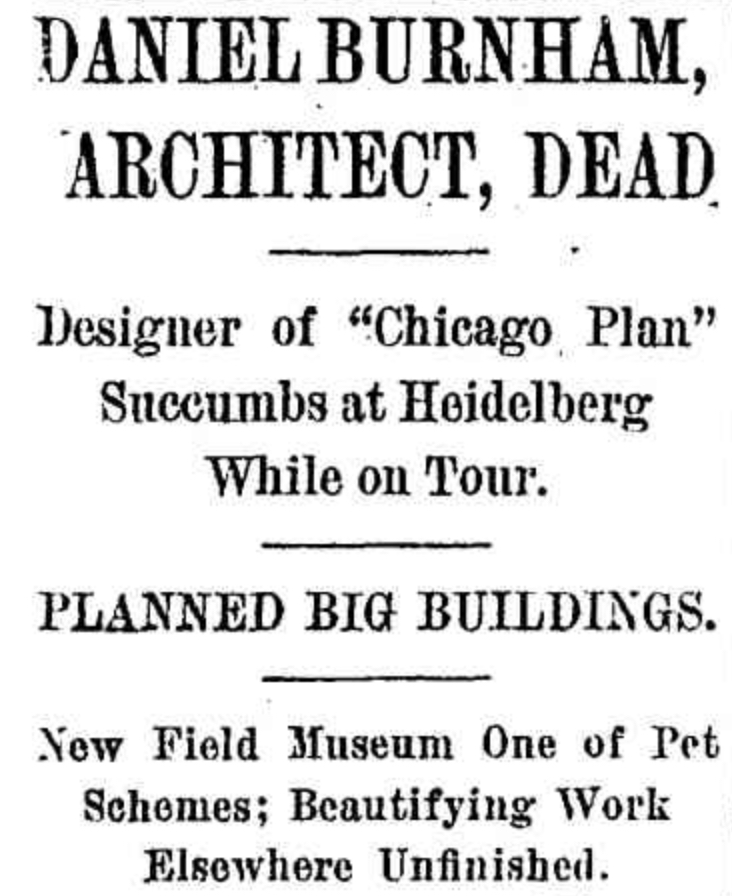 The founder of the Chicago Plan, Daniel Hudson Burnham, died, yesterday in Heidelberg, Germany. He did not live to see his greatest idea, the beautifying of Chicago, actually and tangibly under way. Much of his work along similar lines in other cities remains unfinished.

Mr. Burnham was 66 years old. He had been seriously ill only a few hours when he died of diabetes, a disease which had troubled him for some time. He was traveling with his wife, his son, Hubert Burnham; his daughter, Mrs. A. B. wells, and Mr. Wells, at the time of his death. They had been motoring through France, Italy, and Germany when the Chicago architect became suddenly ill. He died at 6 o’clock this morning.

Paid Tribute at Concert.
Few details of Mr.Burnham’s death were received by his relatives in Chicago, and his funeral arrangements are not known. The party abroad will return to the United States on June 28 by the Amerika.

Tribute to his memory as an earnest worker in the field of art and a generous patron of music was paid last night at the final concert of the North Shore festival. News of Mr. Burnham’s death was received just before the concert. He was a director of the Chicago Orchestral association and of the North Shore Festival association. As a fitting memorial Mr. Stock and the orchestra interpolated the funeral march from “Die Götterdämmerung” and the A Cappella choir of the Northwestern University offer a song of praise.

There is scarcely an American architect who has completed the amount of work which Mr. Burnham has and who has received the honors, both in America and abroad, which have been accorded him. 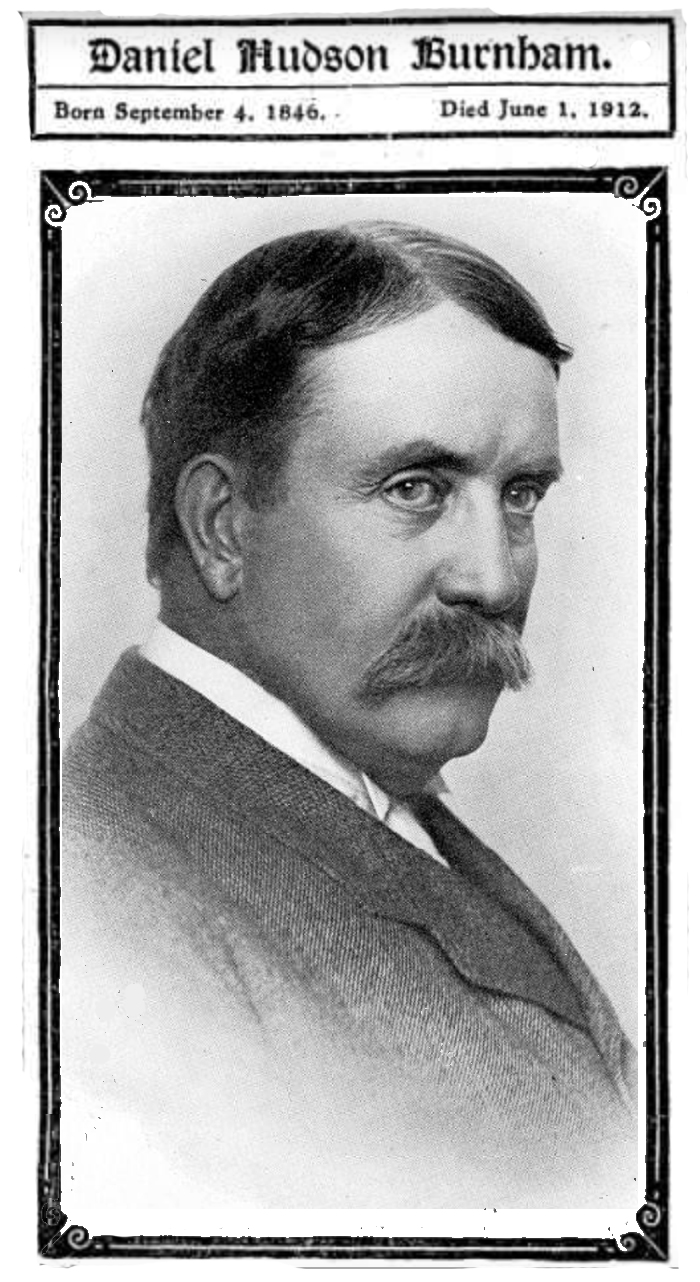 “Father of Skyscraper.”
In the last few years he has turned his attention to municipal plan work, and many cities are being beautified along the plans outlined by him. Although known as the “father of the skyscraper,” he has left most of the work on the big buildings that D. H. Burnham & Co. is planning to other members of the firm.

It is a peculiar circumstance that the building which first made his name famous has lasted only to the time of his death, when it is to be razed to make way for another building of more modern Burnham type. In 1880 Rand, McNally & Co. gave Mr. Burnham a commission to erect them a building on Adams street, where land was valuable, and it was necessary to use every bit of available space to make the building yield returns on the investment.

Raze Building That Gave Him Fame.
Upon the experience gained in two other buildings in which some of the walls were carried on iron became Mr. Burnham evolved the first modern steel many storied structure. It was freely predicted that the whole thing would collapse.

Work began last week on the destruction of the Rand McNally building to make way for the Continental and Commercial National Bank building, also to be a Burnham structure, and one of the largest and most beautiful in the west.

Mr. Burnham was born in Henderson, N. Y., Sept. 4, 1846. He came to Chicago in 1856 and was educated here and in Massachusetts. He studied architecture in Chicago and was a boyhood friend of Charles L. Hutchinson, president of the Art Institute, and of Edward B. Butler, whose interest in art and architecture is great.

World’s Fair Architect.
The architect began to be well known following his building of the first skyscraper. He was made chief architect and director of works of the World’s Fair in 1893, and from then on his career furnished a succession of triumphs in architecture. In the last ten or fifteen years he has made the plans for buildings that are valued at $1,000,000,000. Nearly every large city in the country has one of Mr, Burnham’s buildings as one of the sights of the city.

Since he began his work of municipal beautification a few years ago, several cities have been entirely reconstructed along his plans. San Francisco, following her destruction by earthquake, was built up on his ideas which Mr. Burnham furnished. Manila was made one of the beautiful cities of the world through him.

Proud of Chicago Plan.
The mall at Washington around the capitol and the Washington monument were outlined from Mr. Burnham’s plans. Portland, Minneapolis, Brooklyn, N. Y., and Cleveland are in the process of beautification by means of his beautiful plans. Mr. Burnham felt his Chicago Plan was his greatest work.

The greatest piece of building architecture done by Mr. Burnham probably is his Union Station in Washington, D. C. He considered this and the plans for the new Field Museum as among the very best things. His best standing work in Chicago, however, is undoubtedly the Orchestra Hall, a masterpiece in musical architecture.

Mr. Burnham’s residence was at 232 Dempster street, Evanston. He is survived by his widow, three sons, D. H. Jr., John, and Hubert, and two daughters, Mrs. George T. Kelly and Mrs. A. B. Wells of Southbridge, Mass.

The news of Mr. Burnham’s death shocks me. Mr. Burnham was one of the foremost architects of the world, but he had more than professional skill. He had breadth of view as to artistic subjects that permitted him to lead in every movement for the education of the public in art or the development of art in every branch of our busy life.

Without pay he visited the Philipine Islands to make plans for the beautification of Manila and for the laying out of a capital in the mountains in the fine climate of Ragulo.

He was at the head of the fine arts commission, and I venture to say that there was no man in the professional life of the United States who was given more of his life to the public, without having filled public office, than Daniel Burnham. His death is a real loss the whole community.