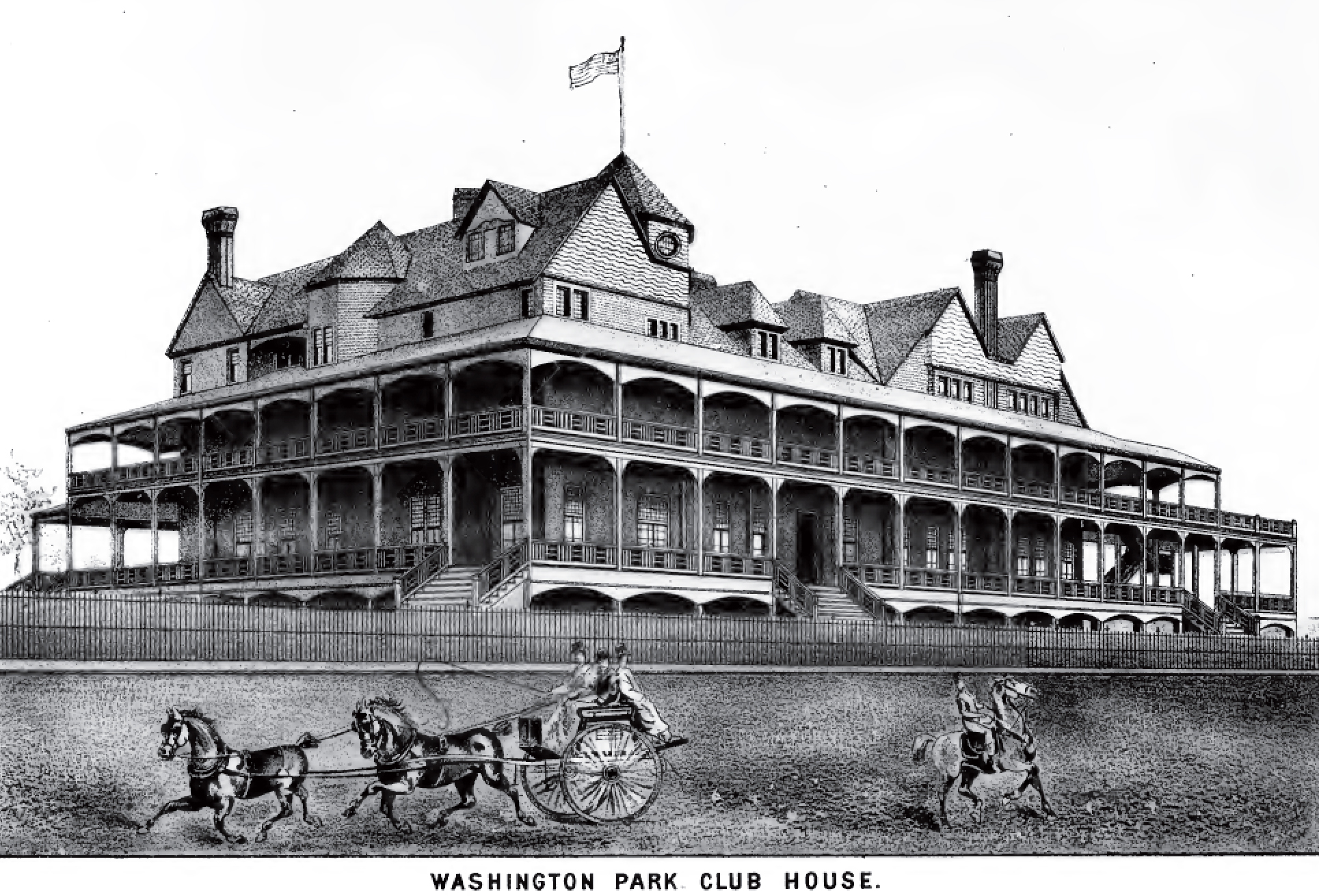 The objects of the organization called the Washington Park Club, which was incorporated in 1883, are to promote good fellowship among its members by providing a club house and pleasure grounds for their entertainment where at all times they may meet for social intercourse, and to encourage, by providing the proper facilities, raising, improving, breeding, training and exhibiting horses, at meetings to be held at stated times in each year. The Club House at Sixty-first Street and South Park Avenue is a low, long, rambling two story building, with broad piazzas on all sides of the house. From its situation, within easy driving distance from the centre of the city, and with its beautiful grounds, the Washington Park offers all the advantages of a country club, such as have become so popular of late in the leading eastern cities. The race course, with all its appurtenances, is one of the finest in the country.

The racing meetings have been pre-eminently successful, and the Club, by its energy and wisdom, has done much to improve and elevate the sport. Aside from this, the Club offers many attractions in its handsome house and the excellence of its service and cuisine. The initiation fee is one hundred and fifty dollars, from the payment of which, however, subscribers for one thousand dollars or more of the original capital stock of the organization, are exempt. The dues are forty dollars a year. The families of the various members, with the exception of sons who have attained the age of twenty-one years, are entitled to all the privileges of the Club.

WASHINGTON PARK CLUB.
A certificate of the Washington Park Club was filed for record yesterday. The object is to establish a gentlemen’s driving-park where running and other meetings may be held. The capital stock is $100,000, 1,000 shares at $100 each. The license was issued to N. K. Fairbank, H. J. MacFarland, J. W. Doane, and John Dupee Jr. The subscribers of the above stock include many prominent citizens. Their names were given last week. 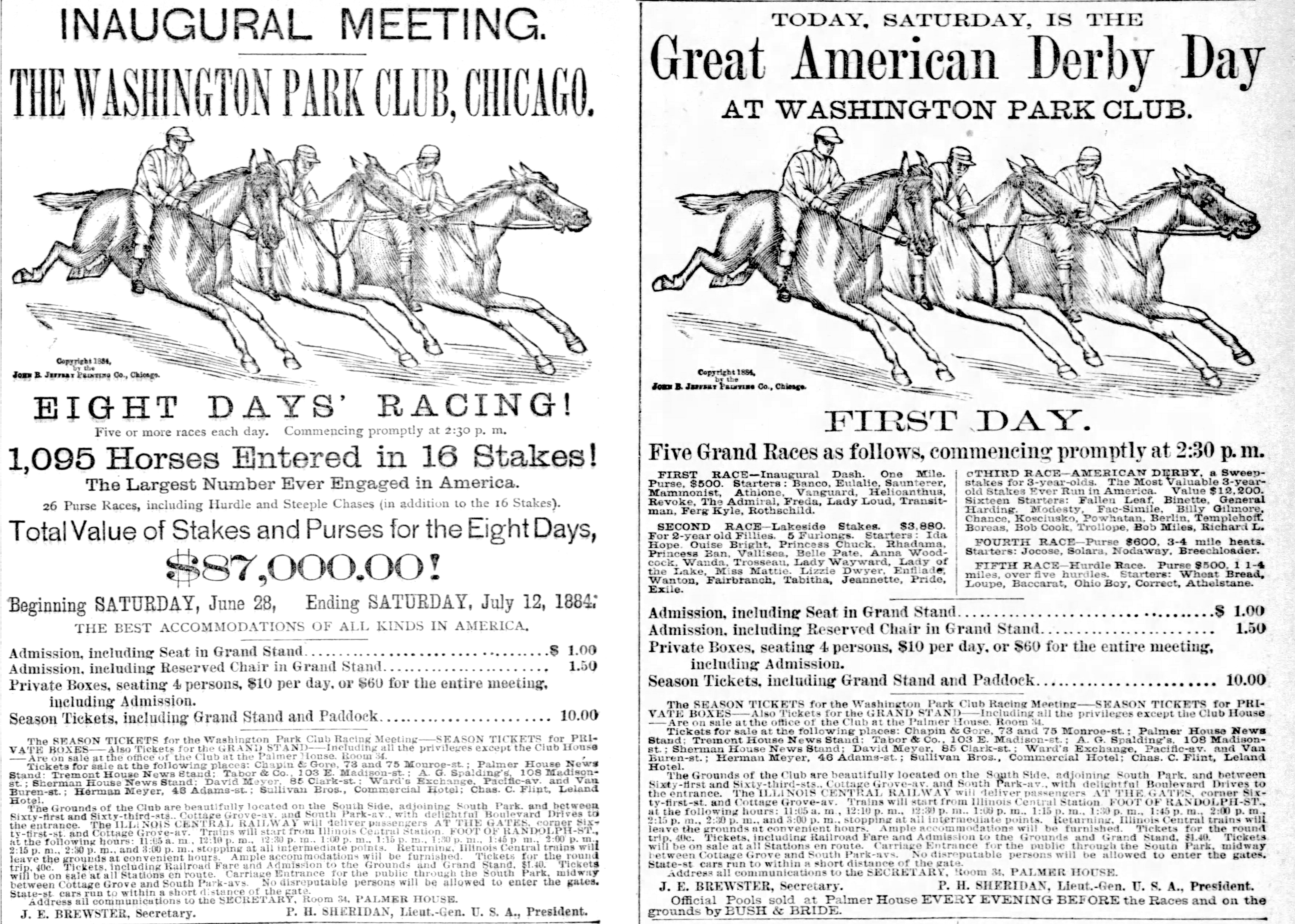 The Washington Park Club threw open the doors of its elegant club-house yesterday for the first time to invited guests, and 3,000 persons availed themselves of the opportunity of inspecting what is to be the finest race-course in the world. The occasion was an informal reception. Cards had been issued by the members of the club to their friends to a lunch at the club-house and a private view of the grounds. About 3 o’clock the carriages containing the guests began to arrive. Entering the grounds at the main gate the carriages drove to the portcochere of the club-house, where numerous grooms stood in readiness to take charge of the vehicles. The guests, upon alighting, ascended to the broad veranda that commands a view of the approach to the park, where were stationed the members of the club who composed the reception committee. Upon the lawn that extends from the club-house to the track an orchestra was stationed. It was interesting to watch the arrival of the guests. From the club-house, out the grounds, and and away along the drive as far as could be seen, came carriage after carriage. Bugle calls announced the approach Mr. Charles Schwarts and party in his coach and four. Mr. Dickey and party were similarly accompanied, and Capt. Kenworthy Brown drove four in hand. Down the road came a dog-cart and tandem, two male exquisites driving, and a conventional footman behind. At one time the carriages arrived more rapidly than they could be disposed of, and quite a blockade was formed, the line of vehicles extending a quarter of a mile from the gates. At 4 o’clock an elegant lunch was served in the main dining-hall.

The club-house is complete in its appointments, and received flattering commendation from all. The first object one sees upon coming within view of the park is a Gothic structure of three stories which presents, an attractive pile of gables, dormer windows, balconies, and verandas. The structure is of the rural English style, and was planned by G. G. Beeman. Entering the building from the portcochere and broad balcony that surround the ground floor one comes into a spacious hall, which extends through the building, opening upon the balcony at the other side. Another hall traverses the first floor in an opposite direction, intersecting the former. In reality the ground floor is an immense hall off from which are numerous other apartments. The hall is finished in hardwoods, and the highly-polished floor is covered in places by Turkish rugs of handsome designs. The chandeliers are brass finished in bronze, and the arrangement is a number of jets branching from a centre. To the left as one enters is the office; opposite is the ladies’ retiring room. Down the hall to the left is the café, 75 by 33 feet, the billiard-parlor, Directors’ parlors, ladies’ reception-room, retiring-room, and five dining-rooms. One reaches the floor above by a broad oak stairway, guarded by a balustrade that is richly carved in open designs. Half way up is a capacious landing where are spread Turkish rugs, and the stairs take an opposite direction from this point. The second story has a grand dining-room of the same dimensions as the café. There are ladies’ parlors, toilet and retiring-rooms, serving-rooms, and seven private dining-rooms. In the third story are the living apartments of the Superintendent of the hotel, sleeping-rooms for members, and servants’ rooms. Balconies are sixteen feet wide surrounding the house on both stories. The entire club-house is 125×80 feet. The building will be devoted to the members of the club and their families, and the freedom of the house will also be extended to members of the press during the racing seasons. The public will not be admitted to the club-house.

Off to the left of the club-house is the grand stand, 504 feet in length, fifty-five feet wide, and three stories high. A broad walk, from which a lawn stretches away to either side, extends from the club-house to the grand stand. At the end of the latter nearest the club-house is the saddling paddock. Here, in plain view of the club-house balconies and lawns, the jockeys saddle, mount, and exercise their horses before going on the track. The grand stand is a model of such structures. It sits back from the track and upon an elevation of five and one-half feet. Greensward slopes to the tracks, and from no position in the stand or from the lawn in front will not the horses be visible from any point on the track. The line of vision is simply perfect. Ten thousand people will be accommodated here. Not on benches or in fixed chairs, but each will have an ordinary chair and there will be no crowding and jamming. Along the front railing and separated from the other seats by a high railing is a row of seventy-two boxes, each of which will accommodate four persons. These will be rented at $10 per day or $60 for the season. One feature of the arrangement is to have the judges’ stand on the same side of the track as the grand stand, so that the judges and the public will have the same baseline as to which is the winning horse. In the basement of the grandstand is a room 200×55 feet, where all the book-making and betting is to be done. In no other part of the ground will it be permitted. Access to the second story of the grand stand is gained by five flights of stairs, and on top of the building is a promenade extending the entire length. From here can be obtained a magnificent view of the surrounding country. A feature of the appointments of the grand stand is the café on the ground floor, where the public can obtain refreshments the same as at the club-house. There also private dining-rooms, and the arrangement is for the benefit of those who have not the privileges of the club-house.

The stables are said to be the finest in the world. Four hundred stalls are already completed, and more are being finished. In the eighty and one-half acres which are embraced in the grounds there are twelve miles of tile drainage. The space inside the tracks is diversified by two miniature lakes with high sloping banks of greensward and cobble-stone margins. Before the formal opening of the par, June 28, there will be steam-cart transportation to the gates of the grounds.

About 6 o’clock the guests began to depart for the city, though many remained till evening to drive home in the moonlight. 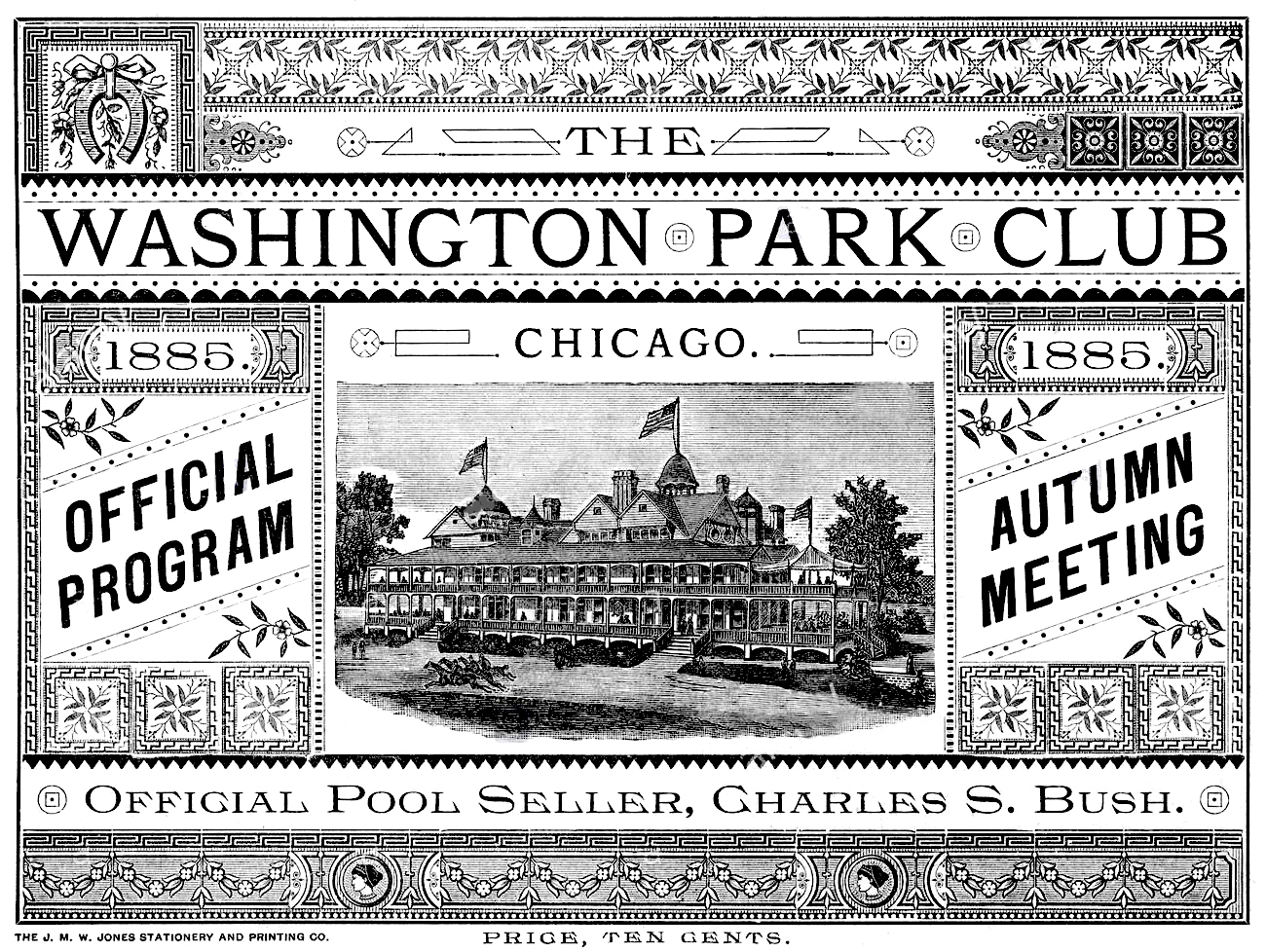 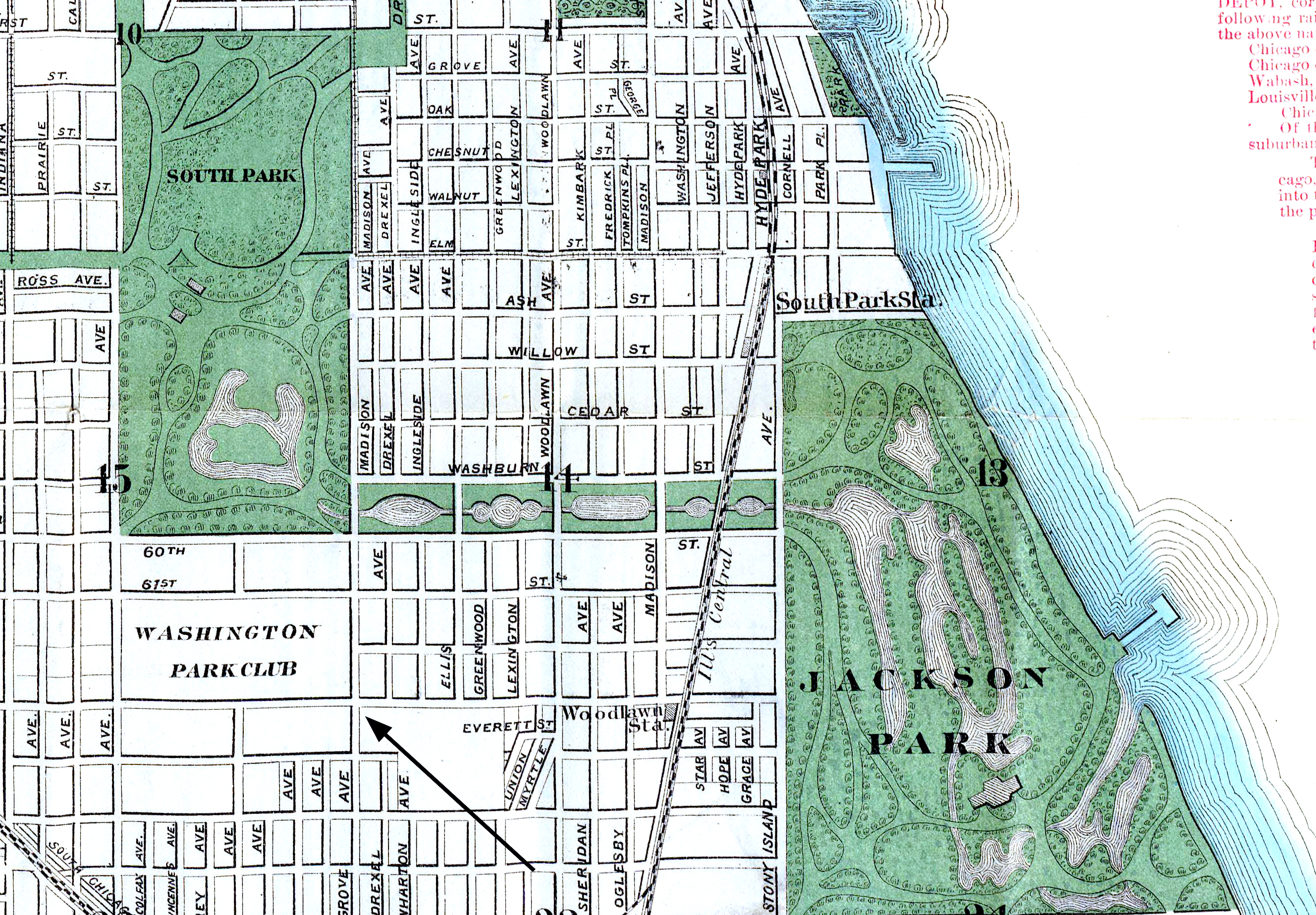