REBUILT CHICAGO.—THE TUTTLE BLOCK.
This noble structure stands at the northeast corner of Lake and State streets, measuring 68 feet front on the former, and 140 feet on the latter street. It was begun on April 7th, 1872, according to the plans of Van Osdel, and cost $80,000. It presents a very handsome street front, and belongs to the better class of our mercantile structures. Mr. Frederick Tuttle, the owner, is one of our oldest and most esteemed citizens, having come to Chicago in 1836, since which remote date in our history he has been a consistent resident. Mr. Tuttle has also built since the fire a handsome block on Michigan avenue, on the site of his old residence, and will build still others the coming spring. He is a large owner and believer in Chicago real estate. 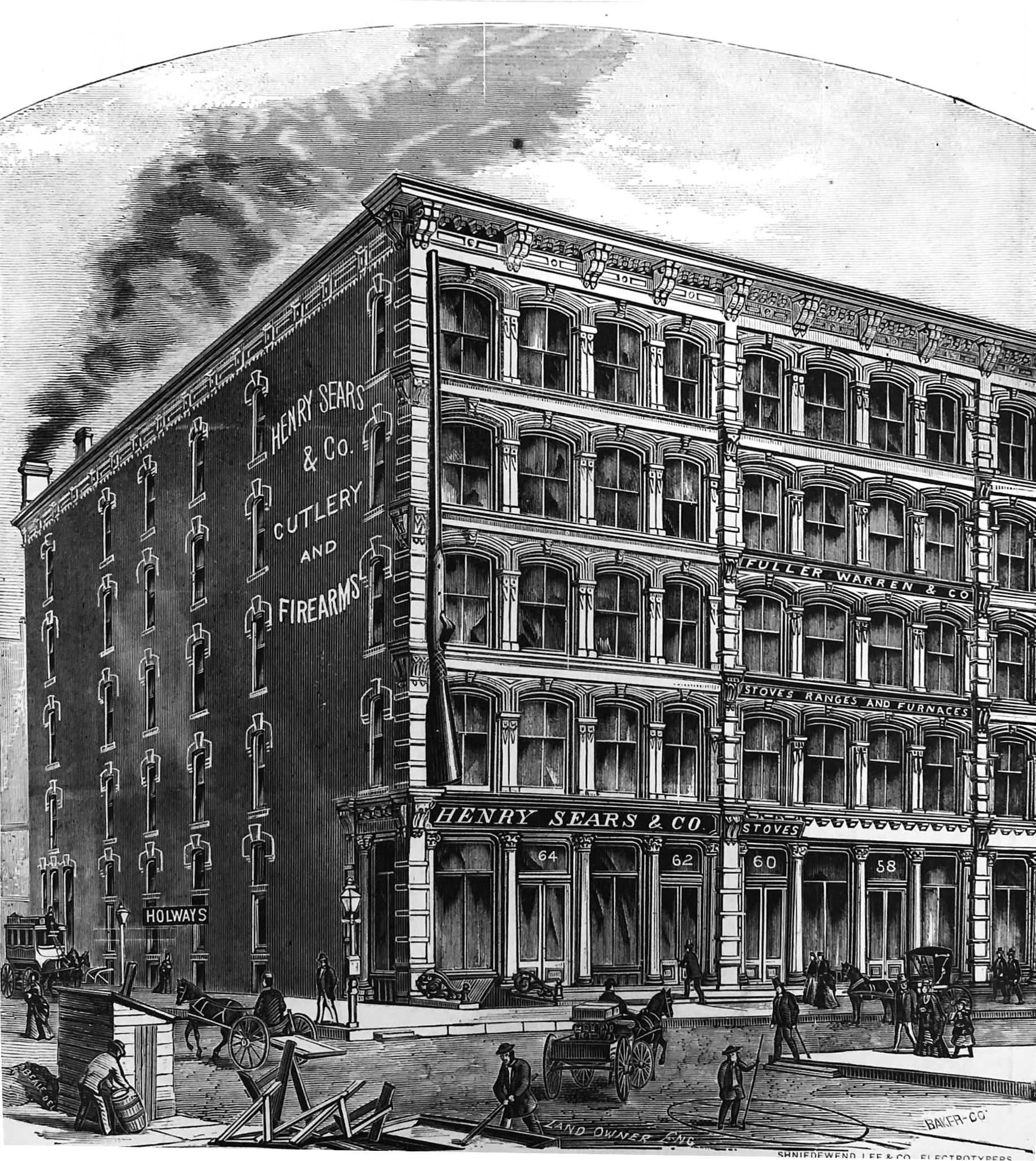 HENRY SEARS & CO.
The elegant, large and commodious corner store in this block is occupied by Henry Sears & Co., manufacturers, importers and jobbers of cutlery in general variety, and dealers in general fire-arms. This house are the exclusive agents for the H. Sears Manufacturing Co. pocket cutlery, a very large institution. Their store is well-stocked with all varieties of goods in their line, and its spacious windows and good light enable customers to see exactly what they are buying. By contrast and close attention to business this house has won an enviable reputation, and built up a large trade. After the fire they located temporarily on South Canal street, where they transacted business until the Tuttle block was ready to receive them.

FULLER, WARREN & CO.
The firm of Fuller, Warren & Co., who occupy the other store in this block, consists of Jos. W. Fuller, J. H. Warren, Geo. A. Wells and W. P. Warren. Their works are at Troy, N.Y. It is claimed that this is the largest stove, range and heater manufactory in the world. Their stoves can be found in all sections of the globe. They ship several hundred stoves yearly to Constantinople. They are now filling an order for the Stewart Stove which goes to the Black Sea and from thence transferred 275 miles on the back of camels. This house manufactures the celebrated Stewart Stoves, Lawson Heaters, Warren Ranges, and a large variety of other kinds of stoves. Space will not allow us to describe their works. They have capacity to make sixty tons of stove and heater castings a day. This firm is as celebrated for the finish and quality of its goods as the watches of Geneva, and the cutlery of Sheffield, England. The demand for their goods as such that they have been compelled to establish branch houses in Chicago, New York and Cleveland. Their sales room at Chicago is 58 and 60 Lake street. The Chicago branch was established in 1860.

Consolidation—Removal.
The J.M. Brunswick and Balke Company (composed of the J.M. Brunswick Co., of Chicago and Cincinnati, and Julius Balke, of Cincinnati, consolidated), have this day removed their office and billiard table factory from Nos. 42, 44, and 40 Adams street, to the large five-story iron front building at No. 62 Lake street, northeast corner of State. At the new and extensive warerooms can be found the largest assortment of superb inlaid and plain beveled billiard tables and goods in their line in the city. Purchasers at this establishment enjoy the advantage of having either J.M. Brunswick’s improved cushions, the famous Phelan & Colender patent combination cushion, or the steel-ribbed cushion. Be sure and note the address, No. 62 Lake street, northeast corner of State. 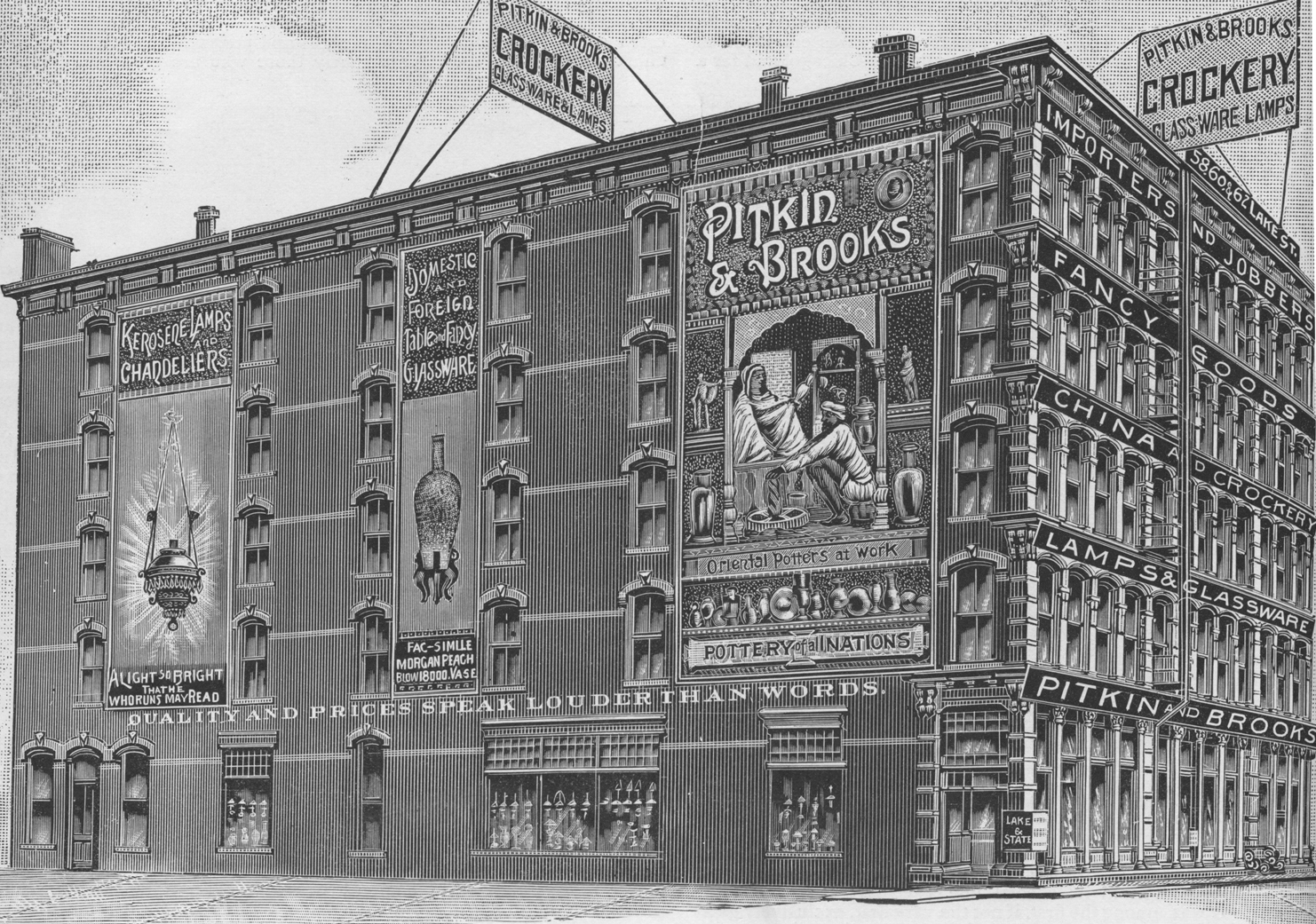 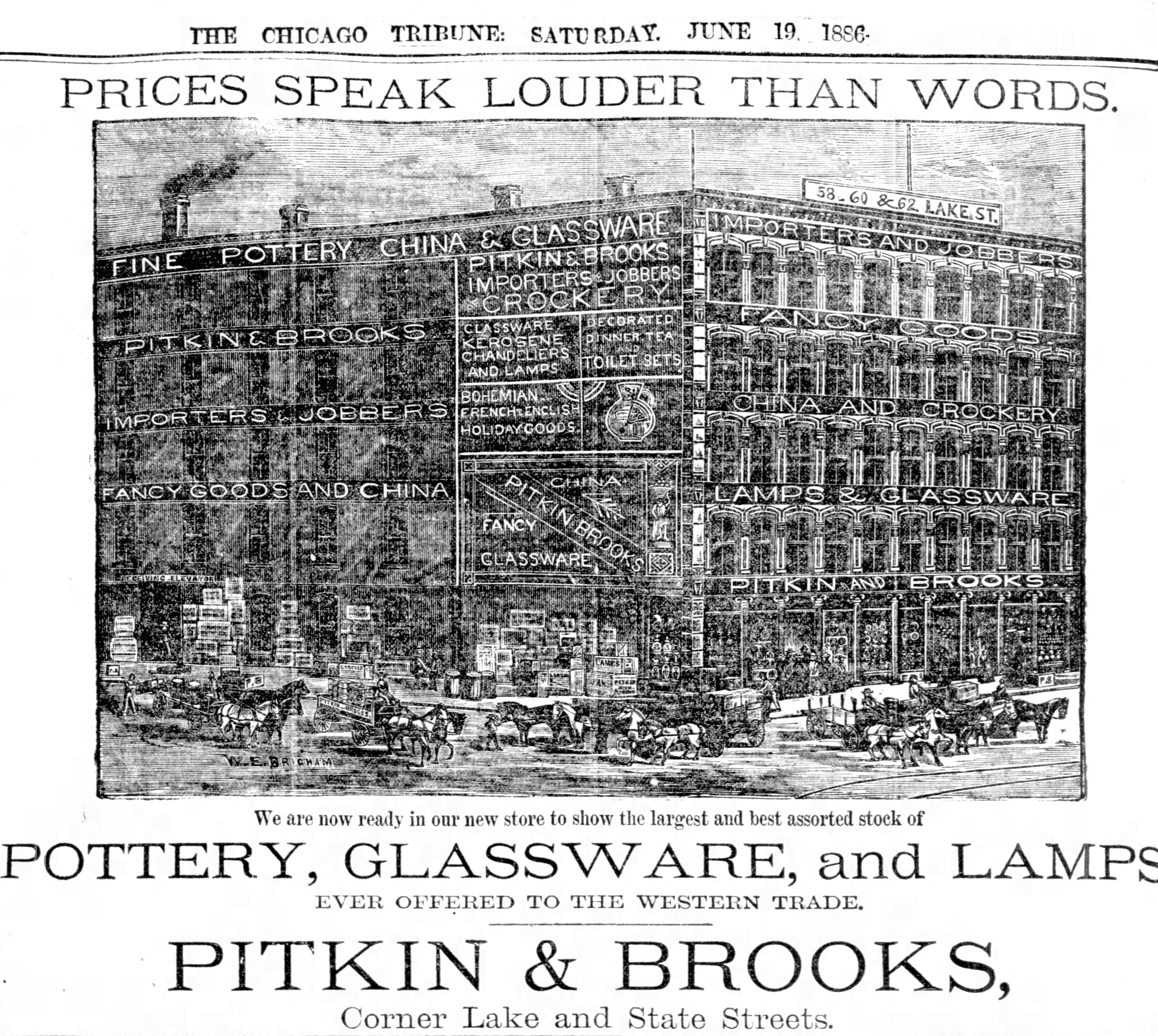 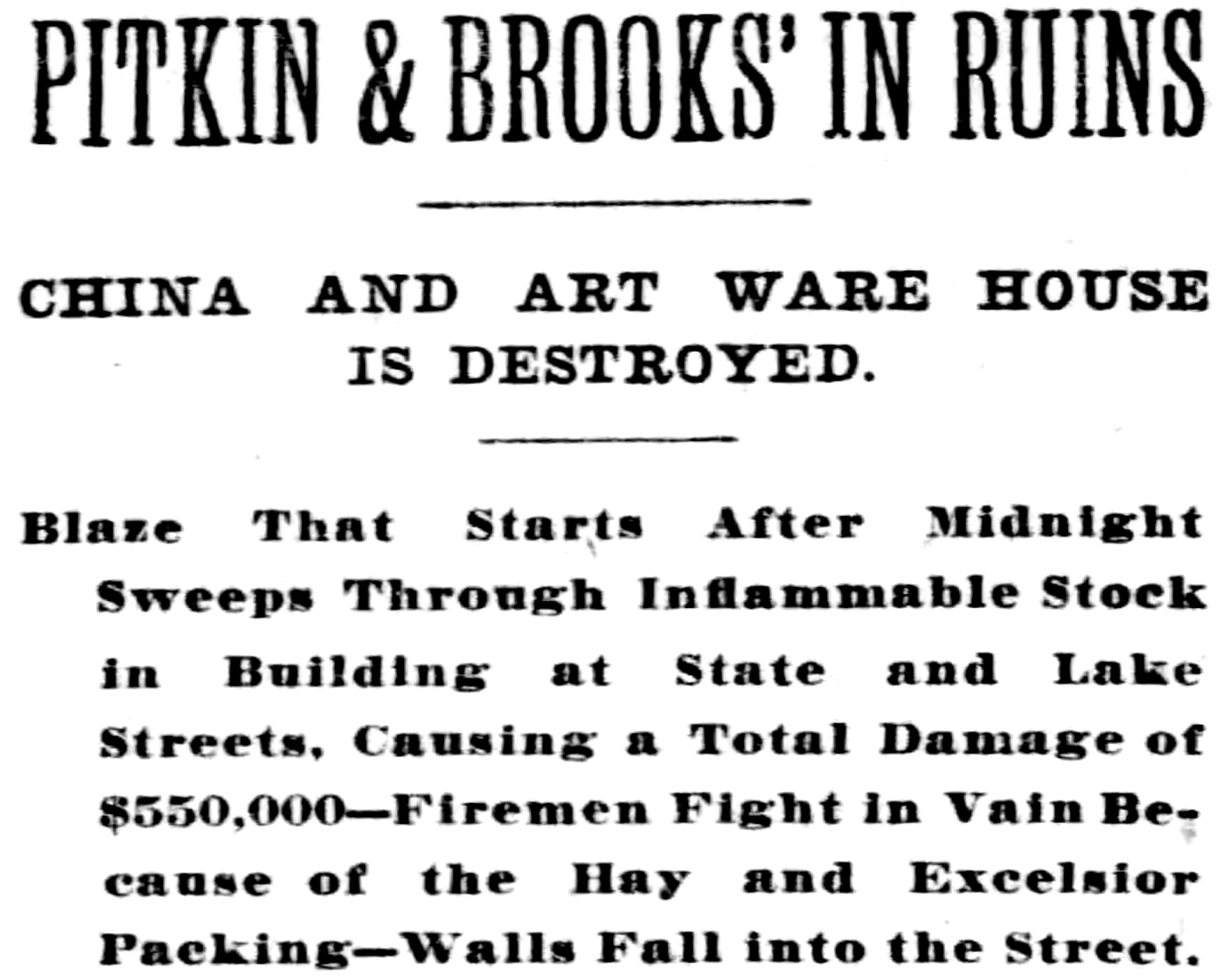 Fire which started just after midnight in the building at the northeast corner of State and Lake streets, occupied by Pitkin & Brooks, wholesale and retail dealers in fine porcelains and general crockery goods, gutted the structure and destroyed its contents. At 2:30 o’clock the west wall fell into State street, leaving the building in ruin, but neighboring property, at times in great danger, was saved.

In the failure to communicate with the owners, Fire Marshals Swenie, Musham and Campion estimated the loss on stock at $500,000 and on the building at $50,000. The building was owned by F. B. Tuttle, except 56 Lke street, which was the property of Mary Corwith Baker. The building extended in State street from Lake street to the alley and occupied 56-62 in Lake street.

Declines to Give Figures.
Early this morning J. W. Brooks, member of the firm, was seen, he said:

The stock is a total loss. I do not care to state its value. It is partially insured. The building is fully insured.

Two days ago a shipment of crockery was received at the the store and placed in the basement. Tis was valued at $50,000. Besides this the building contained china and crockery valued at hundreds of thousands of dollars. The $50,000 shipment was from the Pais exposition.

The fire started probably in the rear of the basement, although one man declared it began in the rear of the second floor. The cause probably was crossed electric wires. The inflammable substances used in packing fine porcelain made eady food for the flames.

At first the fire was evidences in dense smoke pouring from the windows. The firemen in their endeavor to save the fragile contents tried at first to put out the fire by flooding the top floors.

Finally they entered the building and made a sharp fight, but it was too late to save the property. It was impossible to use the stand pipe at the front of the building because of the “L” loop, and firemen used their hose from ladders placed against the Robinson building, aqcross the street, sending streams over the loop tracks. 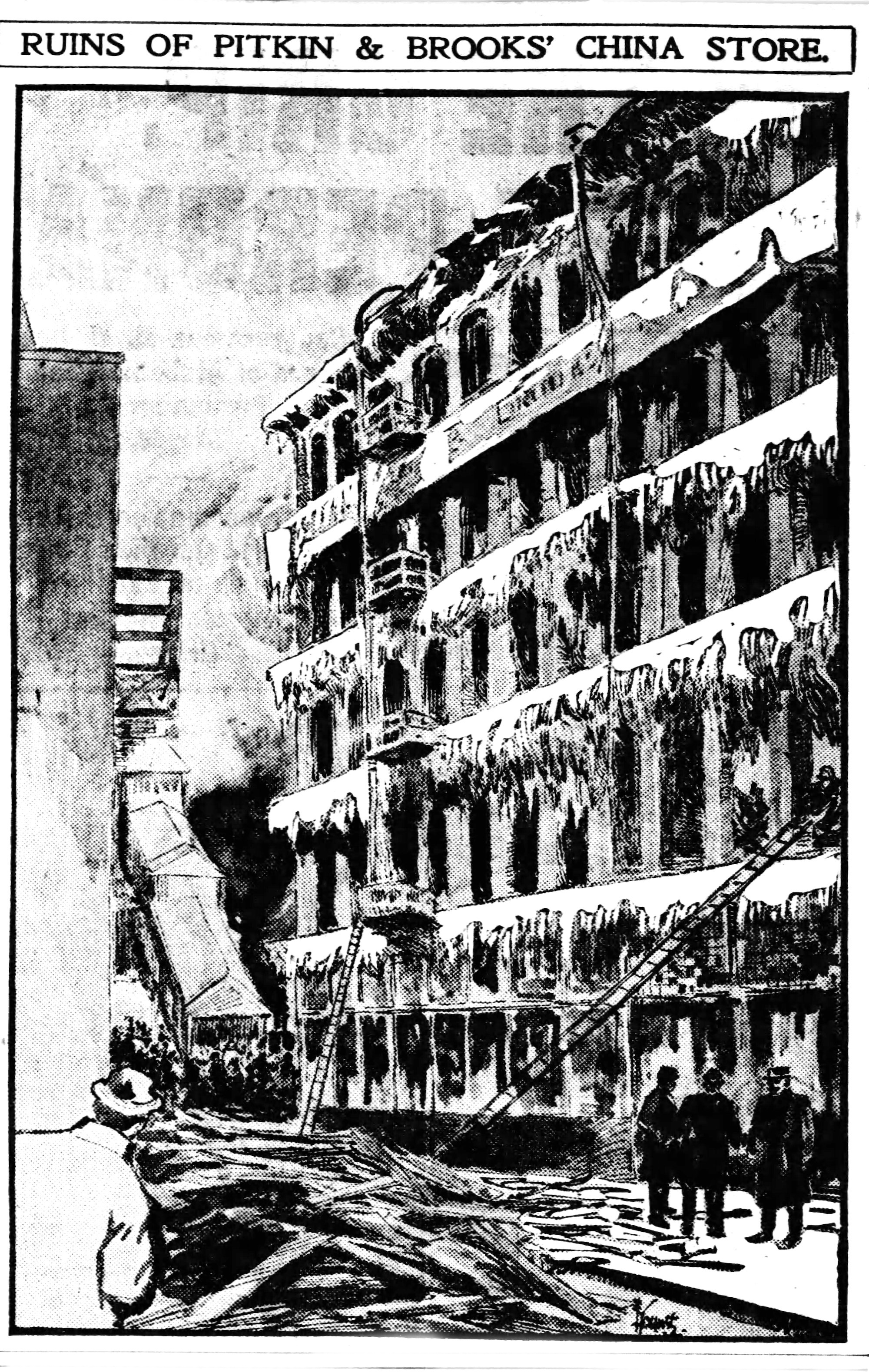 Escape of the Firemen.
While raising a ladder on the Lake street side of the building a dozen truckmen from truck 13 had a narrow escape from death from falling glass and timber.

John Anderson, a watchman for Tuttle & Bailey, whose building joined the burning structure, was in the basement of his building when the fire was discovered. He was partly overcome by smoke before he left the building and was attended by a physician in a drug store.

Trolley Wire Falls.
While hundreds of belated pedestrians and theater patrons were crowded in State street watching the blaze one of the ladders of a truck became entangled with the trolley wire of the North State street electric car line.With a loud report the wire snapped and swung about in the midst of the crowd, spitting sparks in every direction. Several persons had close calls from coming in contact with the live wire. After describing a zig-zag course in the air for several minutes the wire hung motionless. Two policemen were detailed by Lieutenant Flynn of the Central Detail Station to keep spectators and firemen away from the dangerous strand.

Adjoining Pitkin & Brooks’ property on the east is a five-story building occupied by the Tuttle-Bailey Manufacturing company and the Globe Light and Heat company. cross the to the north is the grocery firm of Walsh, Boyle & Co.

The building is a five-story brick structure facing on Lake street and numbered from 56 to 62. It extends from State street to the alley.

Architects are at work on plans for the reconstruction of the five-story building at the northeast corner of State and Lake streets, occupied by by Pitkin & Brooks, which was destroyed by fire recently. The cost is estimated at $70,000. Frederick Tuttle is the owner. Howard F. V. Shaw will reconstruct the adjacent building at No. 56 Lake street, owned by Mary Baker, which was partially destroyed at the same time. 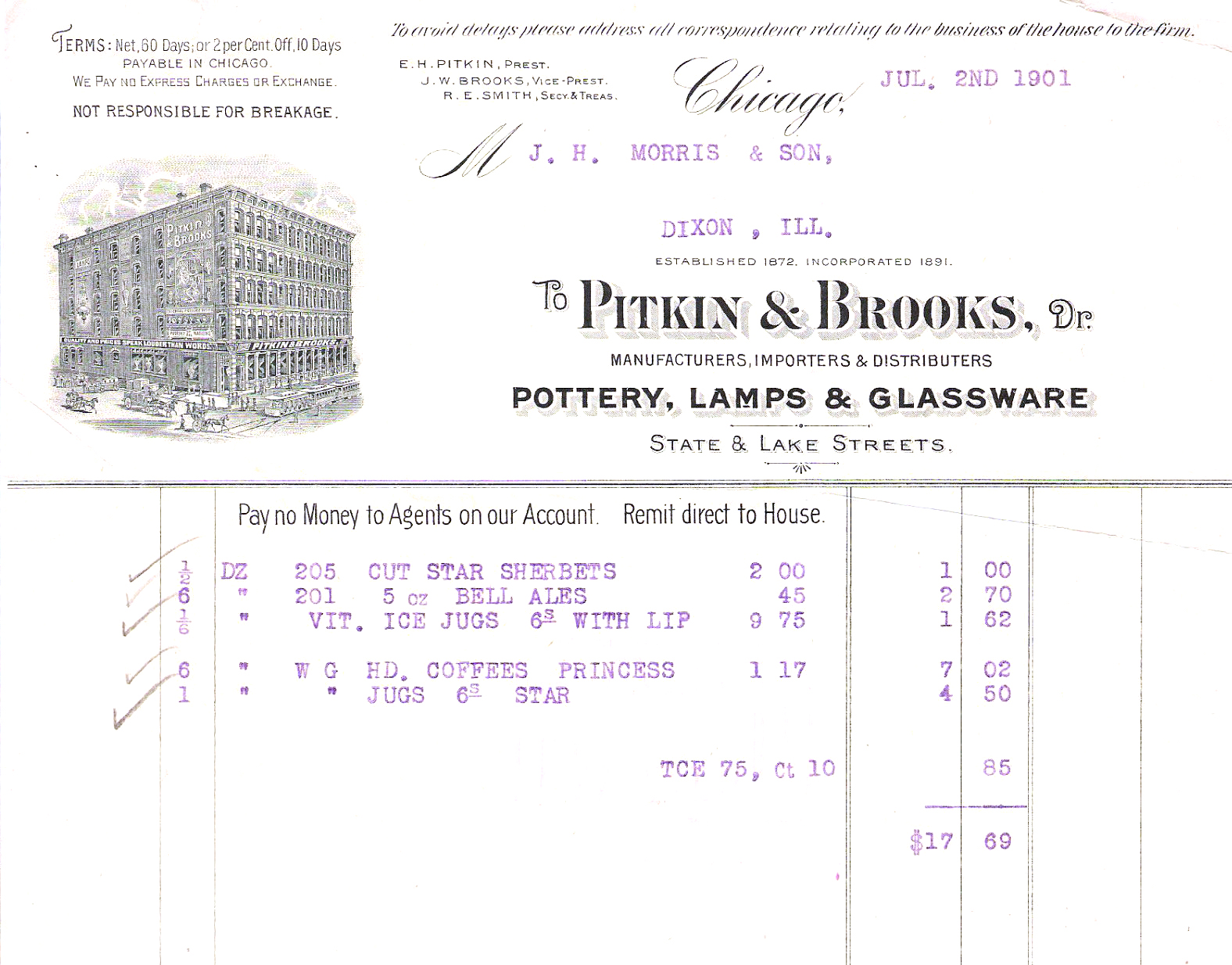 The Pitkin & Brooks building at 16-18 East Lake street, is to be wrecked by April 30. Its site has been leased by R. G. Lydy for his twenty-first Chicago parking station. Pitkin & Brooks, who have been in business for sixty years, will continue their wholesale operations from their warehouse at 444 West Grand avenue. Their retail business will be temporarily discontinued.

The lot just leased is 40×140 and has been condemned by the city for the cutting through of Holden court from Lake street to the lower level of Wacker dive. The Lydy lease will be operative until the city gets ready to use the land. Albert H. Wetten & Co. were the only brokers in the deal. The land is owned by Elizabeth King Bentley, Richard Bentley, and Henry W. King, trustees, and John Edgar Freeman and Richard Bentley. 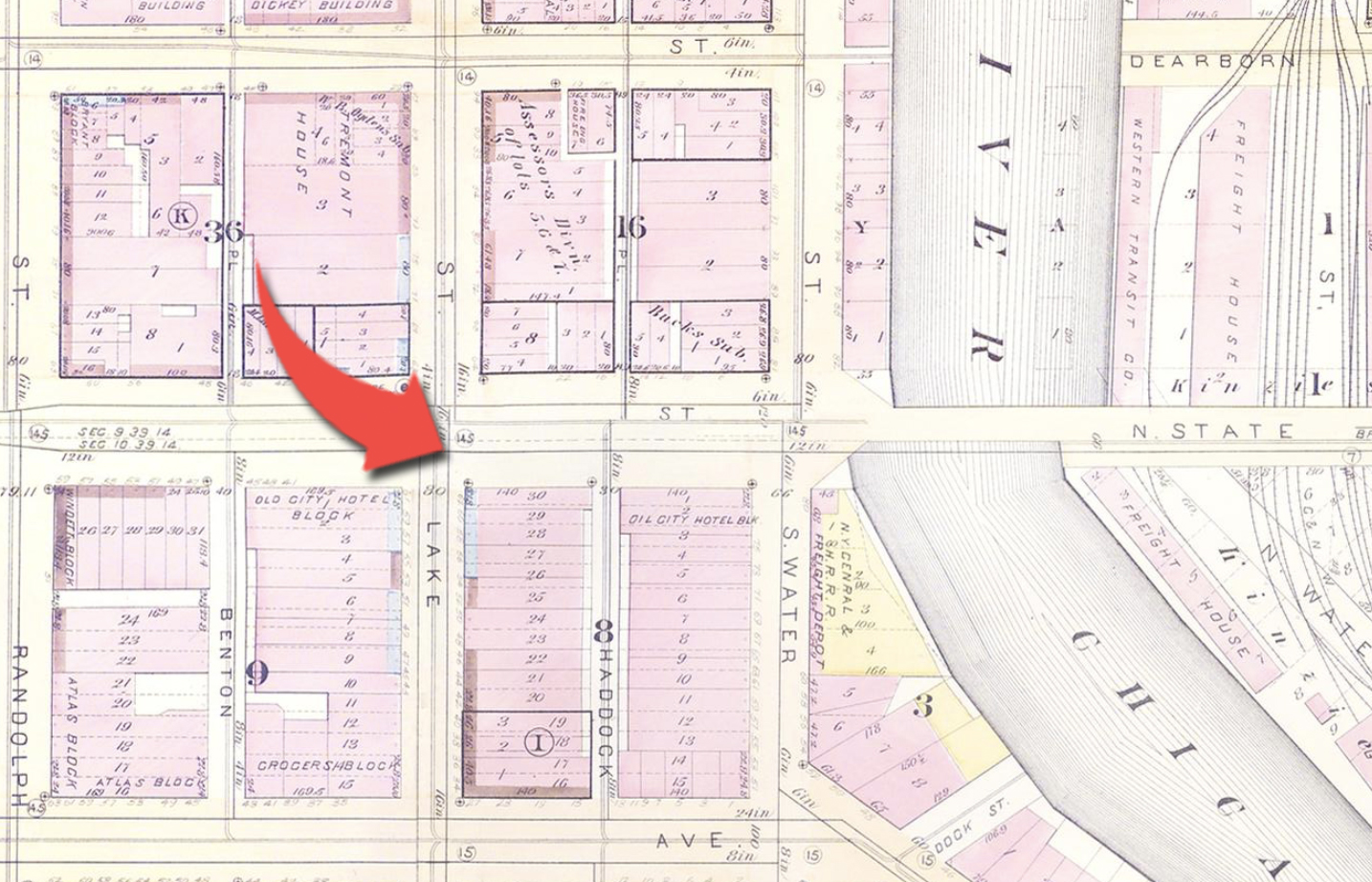 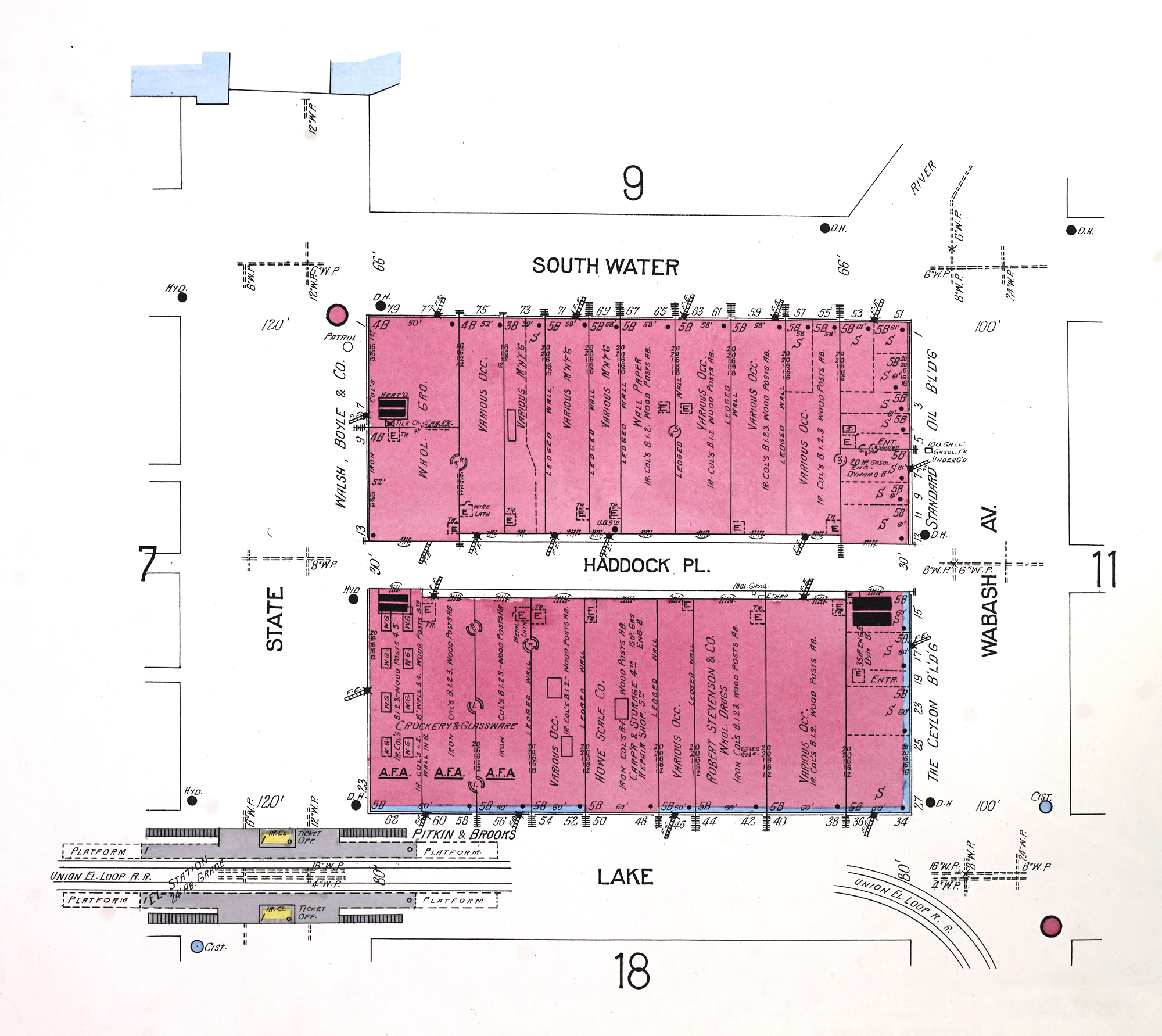 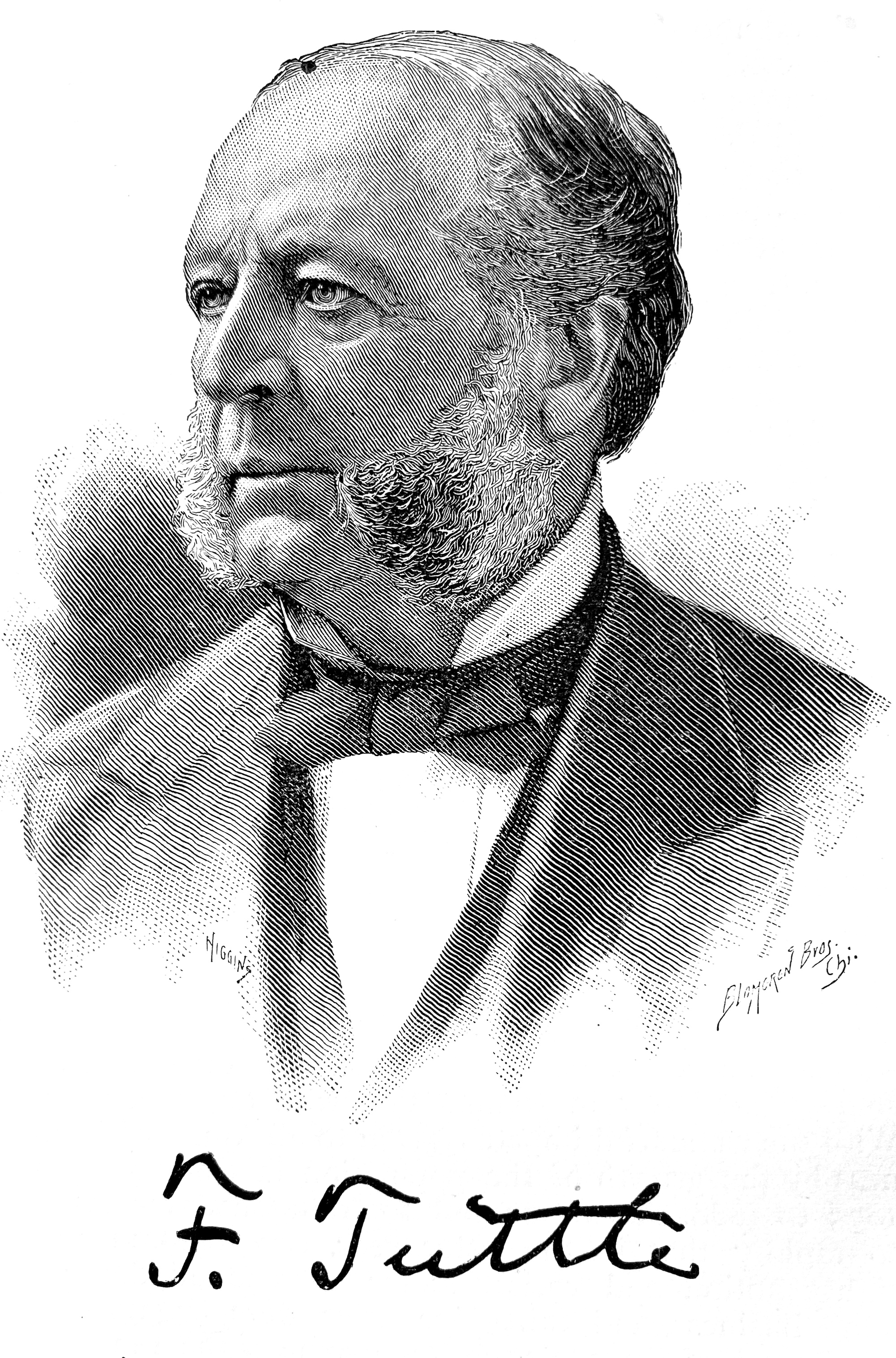 FREDERICK TUTTLE, one of the early residents and business men of Chicago, and well known to nearly every prominent business man here, is a native of New York, having been born in Oneida County, on October 26, 1808. He was brought up and educated in the East, and resided there for some years after attaining his majority. On January 5, 1836—fifty years—ago Mr. Tuttle landed in Chicago. He at once became identified in business life by becoming a part proprietor in the stage line then known as the Western Stage Company—which ran between this city and Detroit, Mich. He continued thus engaged until 1842, when, with his brother, Nelson Tuttle, he opened a general store at what is now known as No. 68 Lake Street. Mr. Tuttle continued engaged in general merchandising for four or live years, and then, with Jeduthan Brown, became proprietor of the American Temperance House and afterward of the first City Hotel in Chicago. Brown & Tuttle continued in the management of the City Hotel until 1853, when they took a lease of the Sherman House. They kept that until 1857, and while there they were highly successful. Mr. Tuttle then became a special partner of the hardware firm of Tuttle, Hibbard Co., the successors to whom is the present firm of Hibbard, Spencer, Bartlett & Co. Since 1857, Mr. Tuttle has not been actively engaged in mercantile life, he having wisely placed the greater part of his fortune in real-estate, which, with the growth and development of Chicago, has so increased as to make him one of our wealthy men. When the law establishing a Board of Police Commissioners in this city went into effect, Governor Yates, on February 22, 1861, honored Mr. Tuttle with the appointment as one of three commissioners. He served a short time, and then resigned. Mr. Tuttle has for many years been a stockholder in the Rosehill Cemetery Association, and is now president of the same. He was married, on August 6, 1846, to Mrs. Mary M. Norton, of Chicago. They have one son, Frederick E. Tuttle. Mr. Tuttle is one of the original members of the Calumet Club and Old Settlers’ Society. He resides in a handsome house on Michigan Avenue, near the Calumet Club House, and at the latter, his favorite retreat, he meets the acquaintances of “auld lang syne,” and with them lives over the days and events of early Chicago.

\
Pitkin & Brooks was one of the oldest and most progressive establishments in the line of lamps and glassware in Chicago. It made a specialty of fine ware of the most artistic patterns. It was started by Pitkin & Brooks in 1872 in a shanty on the Lake Front, built just after the fire to accommodate the trade burned out by the great conflagration of 1871.

in 1890 Frank L. Baum took over a weekly newspaper, calling it the Saturday Pioneer, and by 1891 it, too, was failing. He then found employment in Chicago, first as a reporter and then as a traveling salesman with the wholesale china-and-glassware firm of Pitkin & Brooks. Edward Hand Pitkin once stated, “that fellow Baum who worked for us is the author of a book that is selling like hot cakes.”

William Howell took over the company in 1918 after founder Edward Hand Pitkin’s death. In 1938 Mr. Howell retired and the company was liquidated.