REBUILT CHICAGO.—HAMLIN, HALE & CO.’S DRY GOODS BUILDING.
The massive and imposing structure illustrates herewith, is now being rapidly erected at the corner of Madison and Franklin streets, by Messrs. Hamlin, Hale & Co., for the accommodation of their large dry goods business. While this building is a grand monument to the solid character of our merchants, and a harbinger of future prosperity as a city, it is also an index of the substantial growth of this house, and their rapid progress to the front rank of the mercantile world. Its partners are F. N. Hamlin, R. W. Hale, C. B. Hubbell, Jr., and E. B. Smith.

While displaying to our readers this noble palace of trade, it will be of interest to say something concerning its builders. Messrs. Hamlin, Hale & Co., previous to the great fire, it will be remembered, occupied an elegant store on the corner of Washington street and Wabash avenue. They were the first to inaugurate the westward movement of the wholesale trade, having leased the stores they now occupy for their wholesale business at the corner of Canal and West Washington streets, on the 11th day of October, two days after the beginning of the fire, and almost before the devouring element had ceased to devastate the city. On the succeeding day, October 12, they also leased and occupied their retail store at the corner of West Madison and Aberdeen streets. This house was also the first, either in the wholesale or retail dry goods trade, to re-open and re-commence business after the great conflagration. 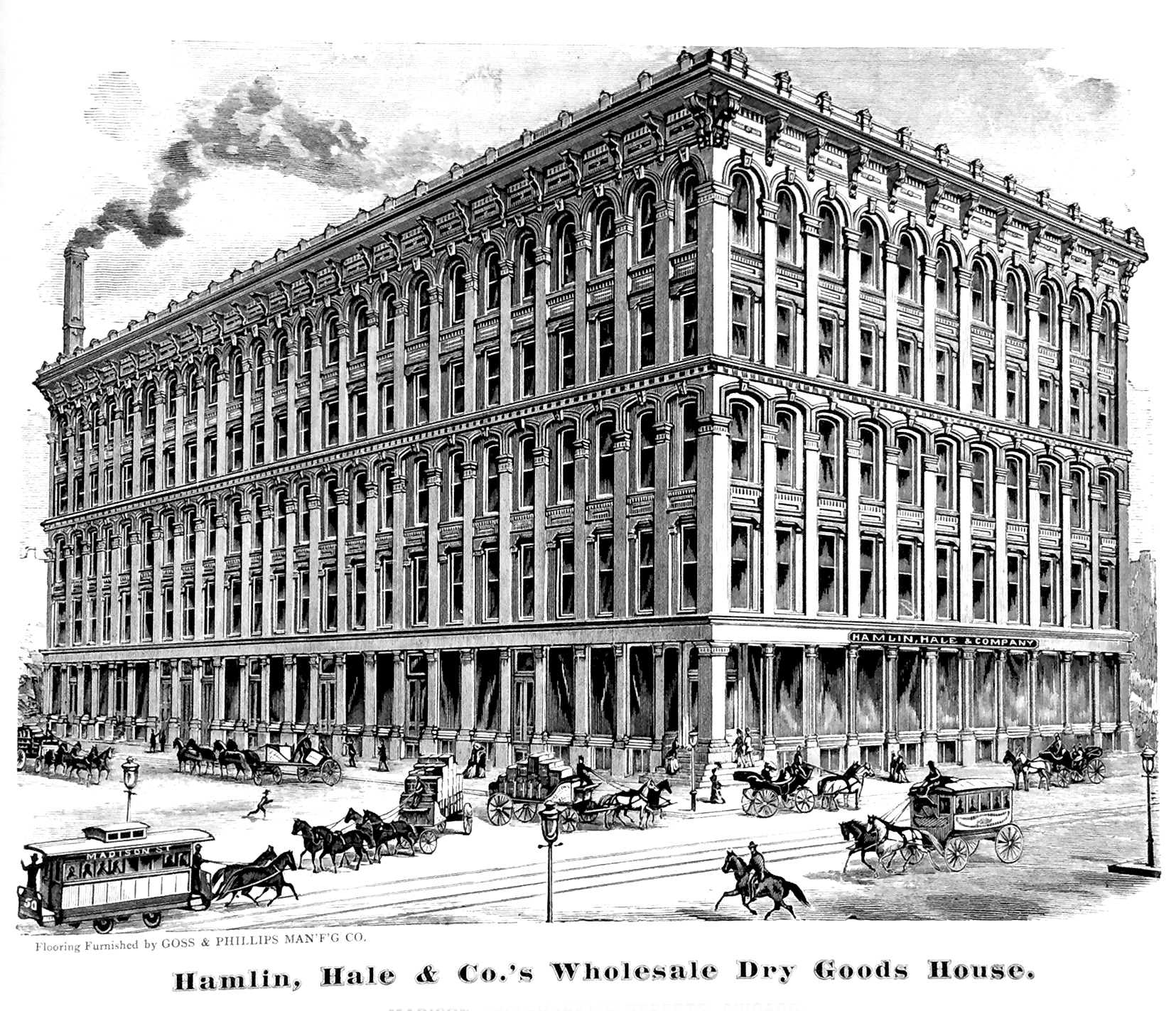 While promptly making these preliminary arrangements, Hamlin, Hale & Co. were at the same time negotiating for larger premices for permanent occupation, and they secured, early in the winter, 90×190 feet on the southwest corner of Madison and Franklin streets, upon which they are rapidly erecting the building shown in our engraving, one of the largest edifices in Chicago. This will be used exclusively by them for their wholesale trade. Their retail business is being provided for by a magnificent structure, 125×100 feet, corner of Madison and Peoria streets, now in construction by the Ewing estate, and which in due season we shall also illustrate. 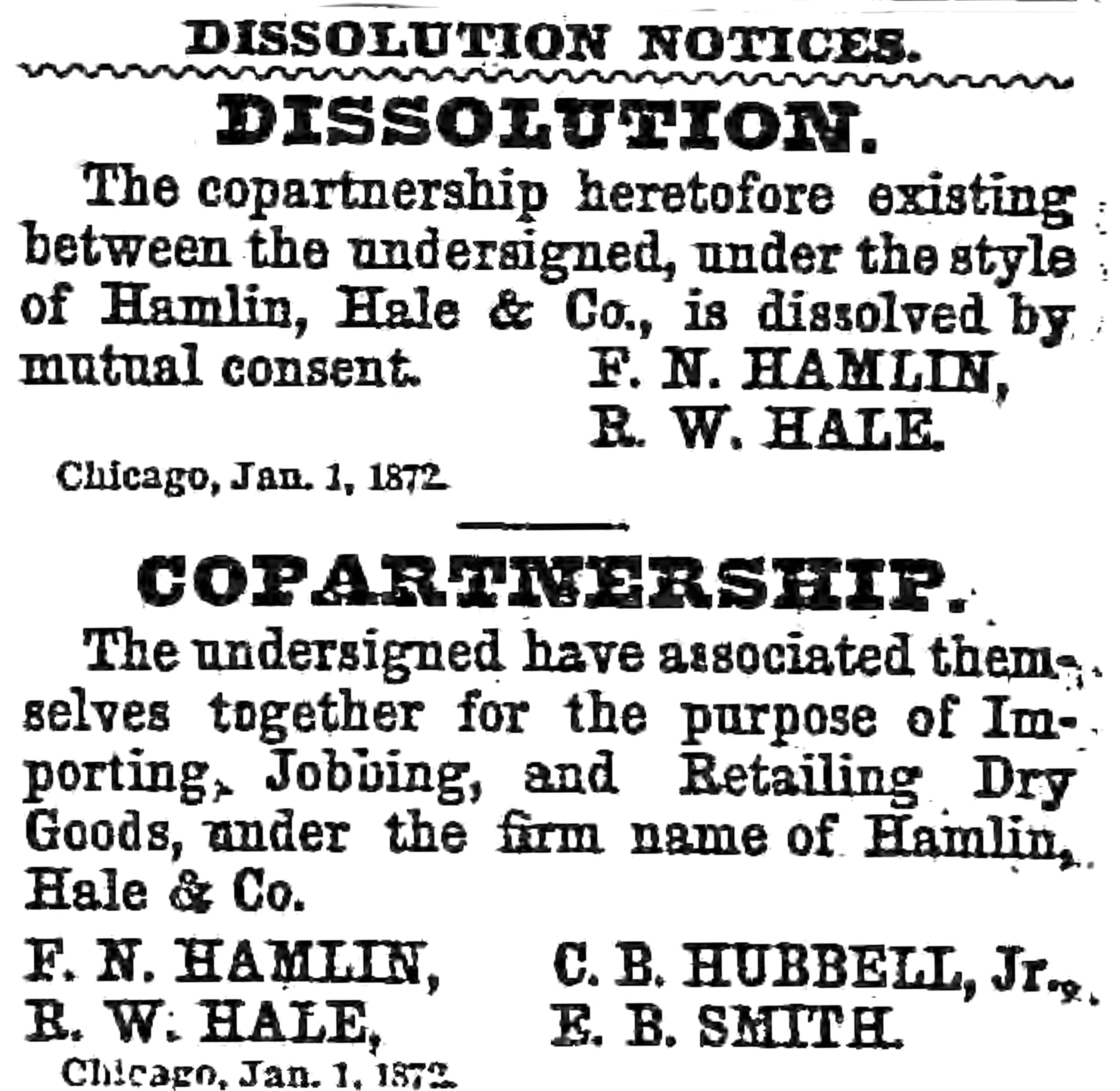 The extent of the business of this house and the magnitude of their stock are sufficiently indicated by the size and character of their stores. The energy, ability and resources which have given this firm their standing in every dry goods market in this country and Europe, and its remarkable popularity with the interior trade of the Northwest, were largely increased on the 1st of January, 1872, by the accession of Charles B. Hubbell, Jr., Esq., of New York, formerly one iof the largest and most successful retailers of St. Louis, and E. B. Smith, Esq., of Chicago. Although there were but two mercantile houses in Chicago whose stock and loss were as large as Hamlin, Hale & Co., we are gratified to know that the additions made to the firm have more than restored their former capital, and that in all their different departments they are doing a larger business than ever before.

The tradition of the past, and the claims of some houses to the patronage of the country upon the grounds of age, are not accounted in much importance by the active and aggressive members of this firm, who base their only claims to patronage upon a fresh and attractive stock, at the lowest prices, and the utmost promptness in all their transactions.

Hamlin, Hale & Co.’s building, nearly opposite of Field & Leiter’s, is almost ready for the roof, and it promises, when finished, to be one of the great dry goods palaces of the city. The building west of it has reached the fourth story, and Mr. Agnew is working a large force of men, under whose manipulations it will soon be covered in.

Hamlin, Hale & Co.
Messrs. Hamlin, Hale & Co. have removed their wholesale business to their new building, on the corner of Franklin and Madison streets, of which mention has been frequently made. Though constructed of brick, it ranks among the most imposing in the city, and reflects great credit on the architects. It was built in ninety days, and built well.

The old firm of Hamlin, Hale & Co. was dissolved in 1871, shortly after the fire, it having been greatly crippled by that disaster and compelled to settle with its creditors at 50 cents on the dollar. Hale, as he says, was induced to go into it at first on the fraudulent representations that Hamlin had a large surplus capital, when such was not the fact. A new firm was established in 1872, under the same name of Hamlin, Hale & Co., and H. B. Claflin & Co. loaned it $100,000 and gave it unlimited credit. This firm was dissolved in November, 1873, and Claflin & Co. relinquished from their just claims $300,000, making $600,000 in all which they sunk in the firm. Hamlin also owed them $75,000 personally. The failure, it is claimed, was caused by Hamlin’s extravagance and inattention to business. Hale also alleges that Hamlin defrauded him out of various sums by devices which he goes on to enumerate at length in his answer. After the dissolution of the old firm in 1871, and the settlement claims, Hamlin by various representations succeeded in persuading the greater part of the creditors to assign over to his father their claims, though they protested they claimed nothing from the firm. He subsequently went to William S. Dunn, of the firm of H. B. Claflin & Co., represented that he was embarrassed, and asked for a loan of $15,000 for an indefinite period, but was refused, whereupon he threatened to file a petition in bankruptcy and have the claim of Claflin & Co. opened on the ground that they had obtained a fraudulent preference. Dunn then refused to have anything to do with him, and Hamlin filed his petition. Hamlin claims that he was guilty of fraud in some respect in relation to the settlement of 1871, so that the settlement is invalid, and also that Claflin & Co. received a preference in that matter, as his father holds the majority of the claims against the old firm. Hale charges that it is Hamlin’s intention to have suit brought by his Assignee against Claflin & Co. to recover this alleged preferral payment which was made to them.

Commercial Trade Building
At the southwest corner of Madison and Franklin streets, is a striking piece of old-style architecture, the designer having secured many novel effects with the simple material at command. The frontages are 50 feet on Madison and 185 on Franklin, with a height of 90 feet in 5 stories and basement. The exterior is of brick and iron, showing long rows of arches at the sidewalk. One passenger elevator and 2 freight elevators. The occupants are the Ames Sword Co., and wholesalers of boots and shoes, jobbers, agents, and others. It was erected at the close of the panic times, in 1878 (1872). 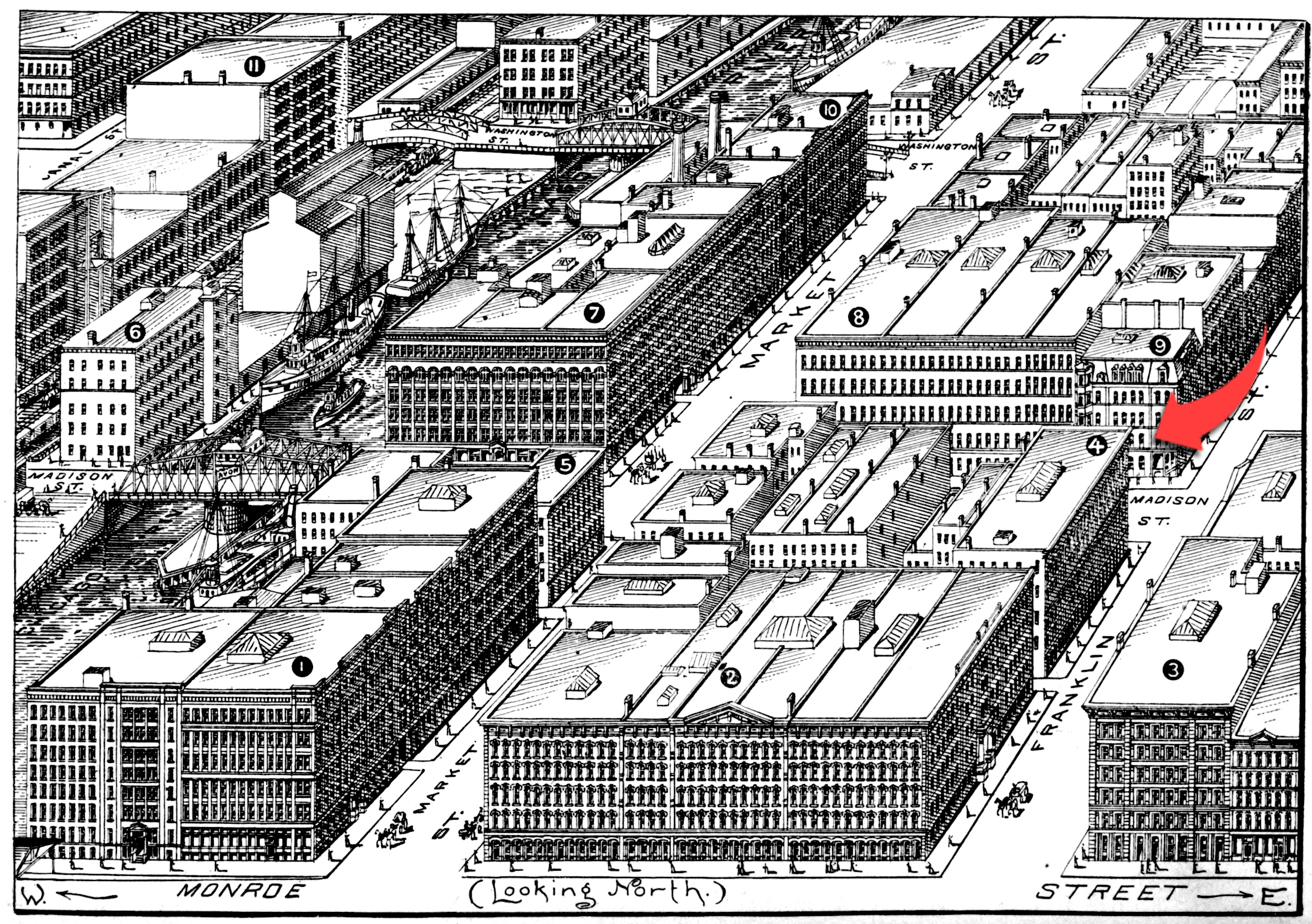 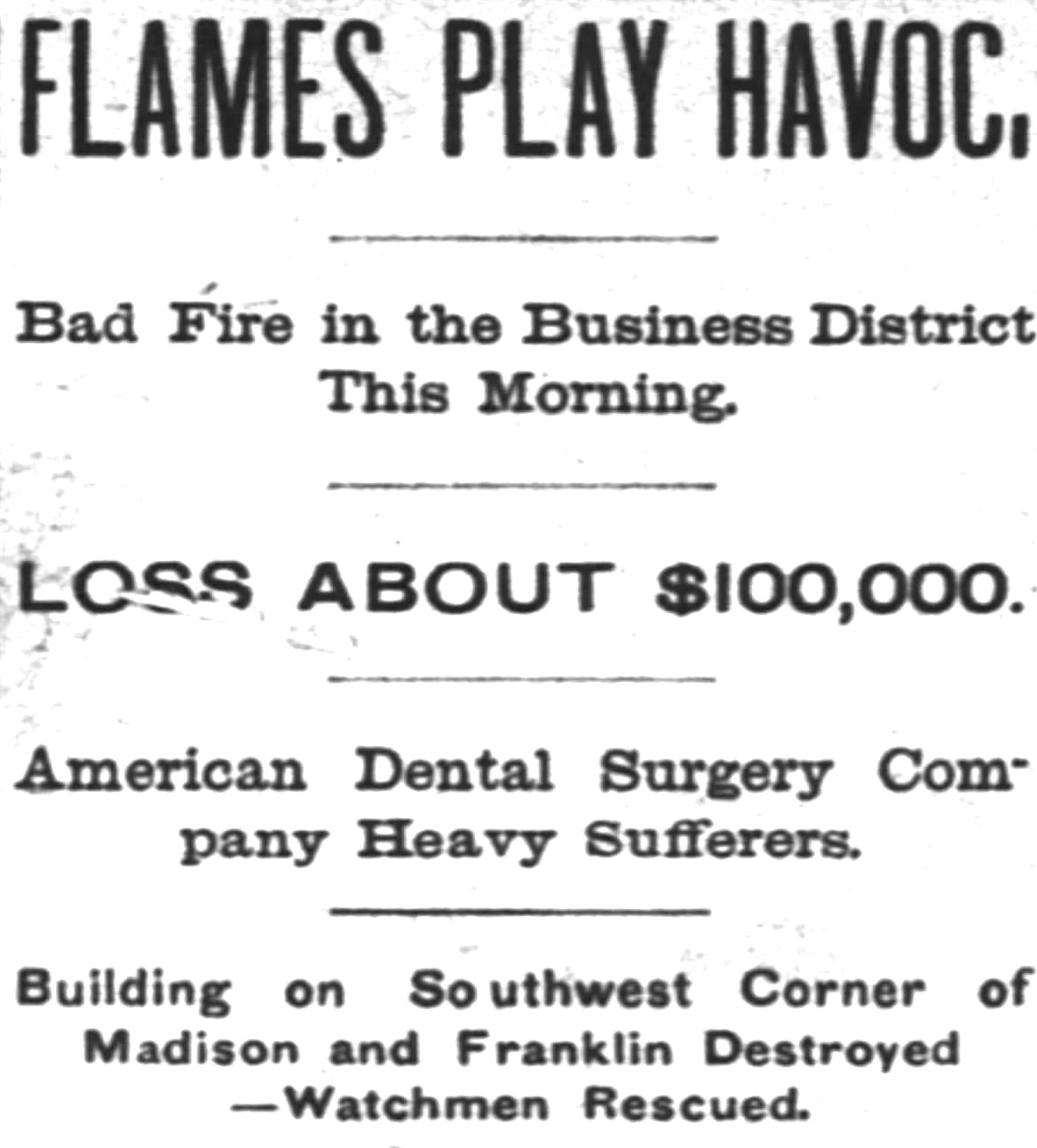 A fierce blaze in the five-story building at the southwest corner of Franklin and Madison streets caused the department considerable hard work between 1 and 2 o’clock this morning, and before the flames were extinguished about $100,000 damage was done. Two watchmen in the building had narrow escapes, and one of them was severely burned and is now at the hospital.

The firms damaged are:

Rescue of the Watchmen.
The fire started on the third floor of the building, which was occupied by J. C. Cosgrove, and quickly spread to the upper and lower floors. Wesley Smith, colored, and Otto Gobbe, watchmen, were on the third floor of the building at the time. So quickly did the flames spread that the men could not escape by the stairway, and both were kept prisoners in burning building until the arrival of the hook and ladder department. Smith was hanging outside of a window to keep from the flames, and Gobbe, it appears, was overcome by smoke and not able to reach a window. Smith was released without much difficulty by the firemen and helped to the ground, but Gobbe had to be carried out of the burning building, and he would have perished had not two of the hook and ladder men entered at the risk of their lives and dragged him out to the ladders. He was unconscious when carried down the ladder, and was burned in the face, shoulders, and hands. His condition is serious, but he may recover. He was taken to the hospital.

The building is owned by Settow Bos.

The cause of the fire is a mystery. The watchmen say there was nothing to start a fire on the third floor and the origin of the blaze may never be learned.

At. 2:30 the flames spread to adjoining buildings, and the marshal thought the entire block would be destroyed. 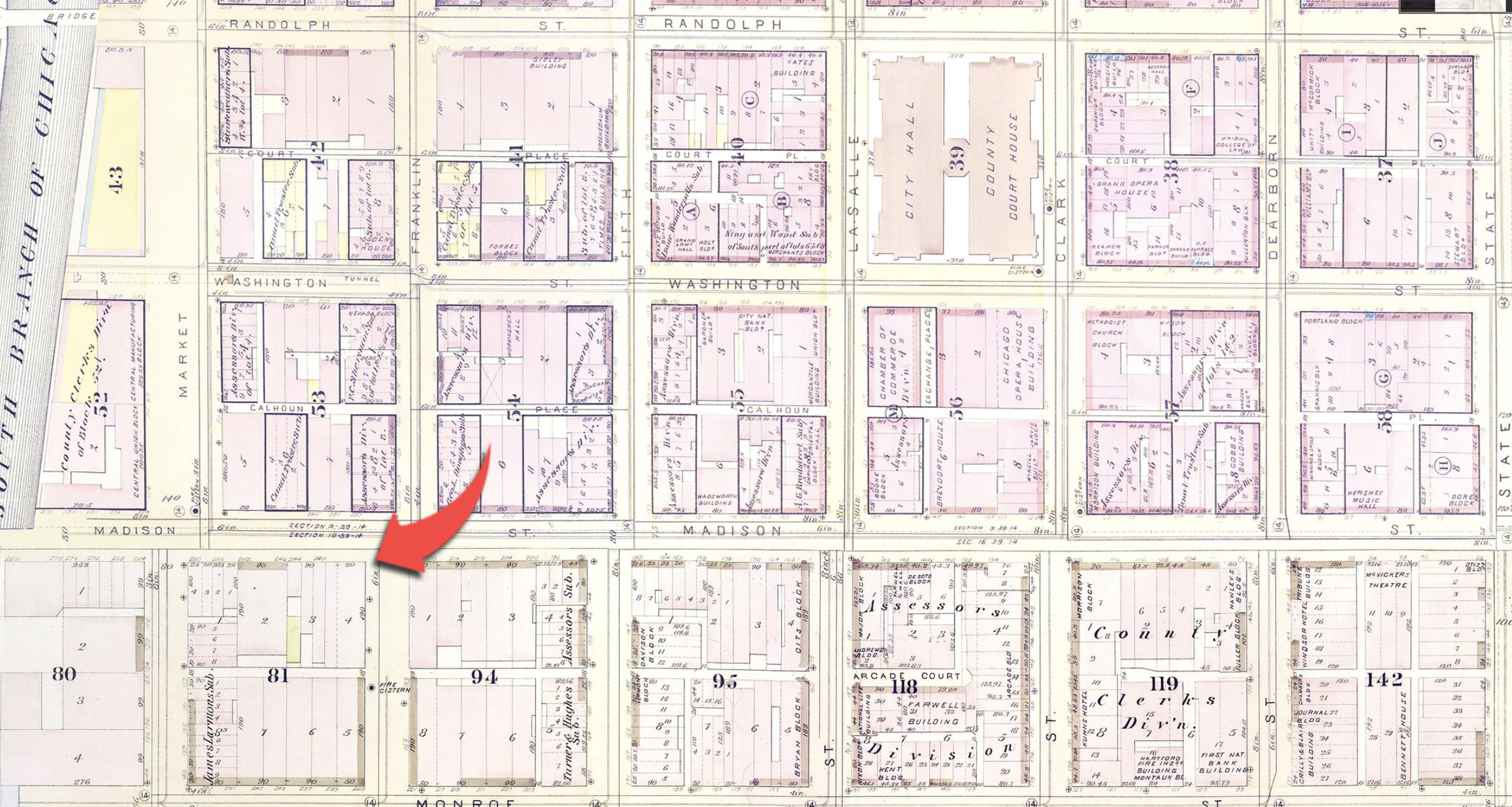