Originally known as the Reed Block. Fronts 120 feet on Wabash Avenue and 160 feet on Lake Street, at the northeast corner. It is a 5-story brick building, 85 feet high, with 4 freight elevators. It is occupied by Hibbard, Spencer, Bartlett & Co. with the largest general hardware business so far developed in Chicago. There are 325 employes. Erected in 1872.

After the Great Fire destroyed the first Hibbard, Spencer, Bartlett & Co, store, William Hibbard resumed temporary business at his home at 1701 Prairie Avenue. Hibbard’s home was open not only to his firm, but for all friends whose families needed shelter. Customers responded generously to an appeal to pay their outstanding obligations promptly. Orders were filled from New York, and new supplies were rushed to Chicago from New York and Milwaukee. The Hibbard stable was jammed with hardware, and a big shed was erected in the garden. The drawing room space not filled with desks was stored with cutlery. The clerks slept on the floor and ate in the kitchen.

THE NEW REED BLOCK—MESSR. HIBBARD & SPENCER’S HARDWARE HOUSE.
Towering above the ruins and growing buildings, as you pass east on Lake street, appears the fine block being erected by J. H. Reed, Esq., at the northeast corner of Lake street and Wabash avenue. This edifice is among the best class of mercantile structures in our rebuilt Chicago. It is 140 feet on Wabash avenue, by 48 on Lake street, of pressed brick, with plate glass and heavy galvinzed iron cornice, and is substantially built throughout. The architects are Messrs. Wheelock & Thomas. 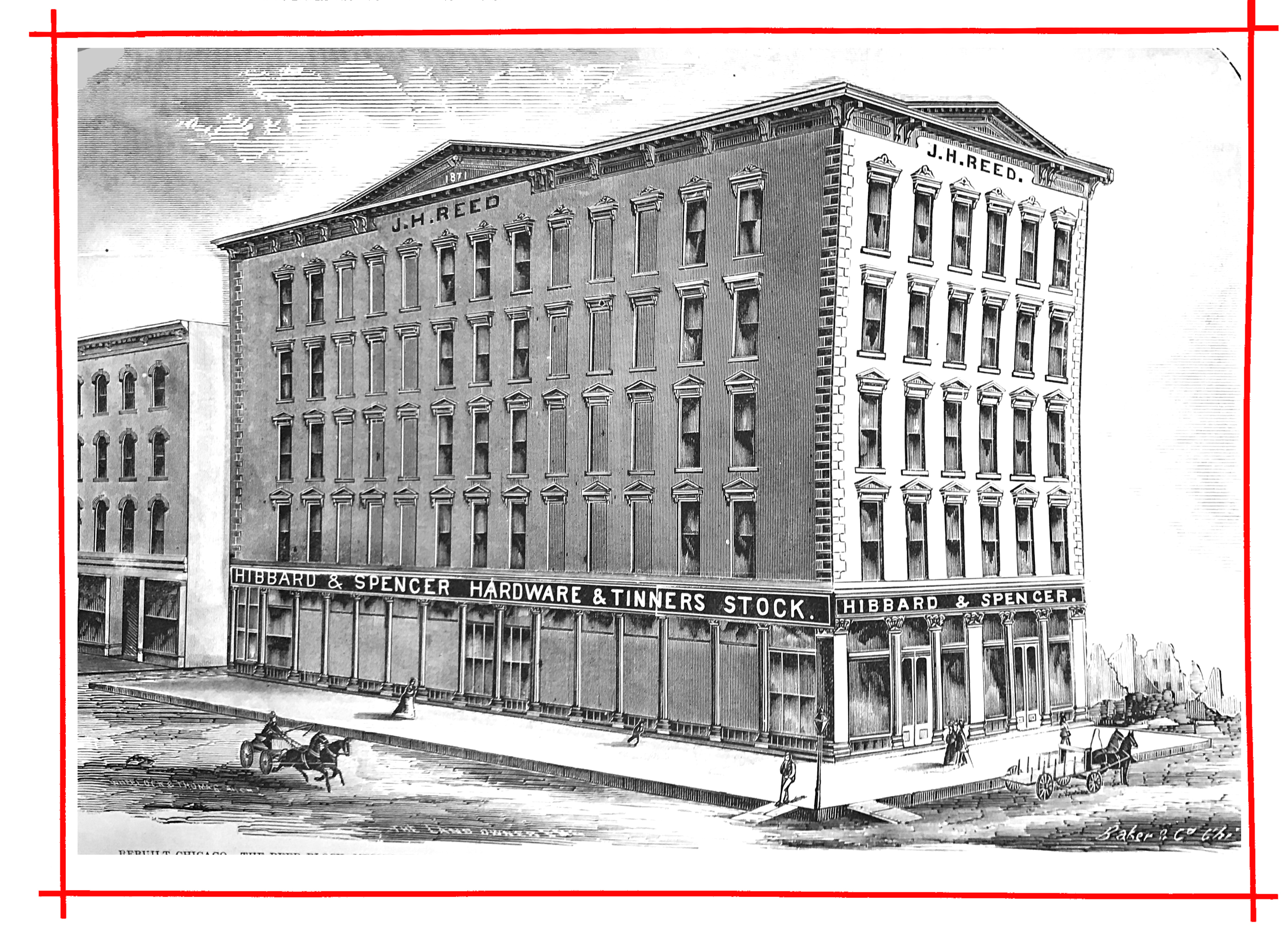 This magnificent business edifice will be occupied at an early day by that old and reputable house, Messrs. Hibbard & Spencer, wholesale dealers in hardware. This firm will be better housed than before the fire in this block, and better able to serve their patrons. Although sufferers in the fire, their resources and capital remain unimpaired, and their business received little or no interruption. They are temporarily located on the lakefront, near the foot of Washington street, where they will transact their large business until the new block is ready for their occupancy.

Do the public understand that our Chicago merchants will be as well able to sustain the high reputation of this market this spring as ever before? All the old stocks were destroyed, and entirely new goods have taken their place. There is no old rubbish in the Chicago Market. Everything is new, everything has been bought to supply a well understood demand. The quick action of Messrs. Hibbard & Spencer in re-establishing themselves in so large and commodious store as Reed block will furnish them, is but an example of what all our merchants are doing. The many customers of this staunch firm will look at our engraving of their new quarter with pleasure.

The temporary building where Hibbard and Spencer resumed business after the Great Fire until the next building was being built. Located on the lakefront, near the foot of Washington street. 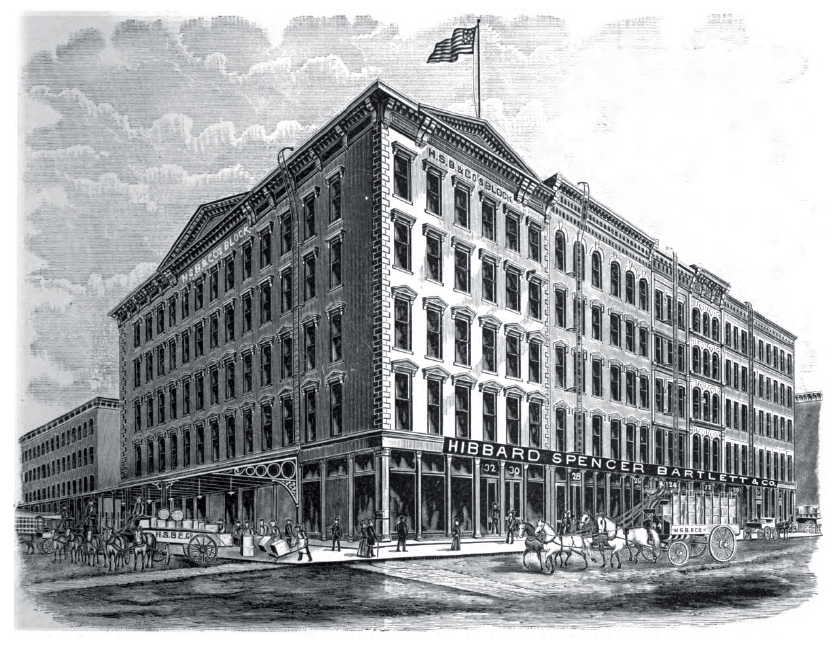 Reed Block
The company rented adjoining buildings on the rest of the block and the address became 16-32 Lake street. The company became Hibbard, Spencer, Bartlett & Co. in 1882. 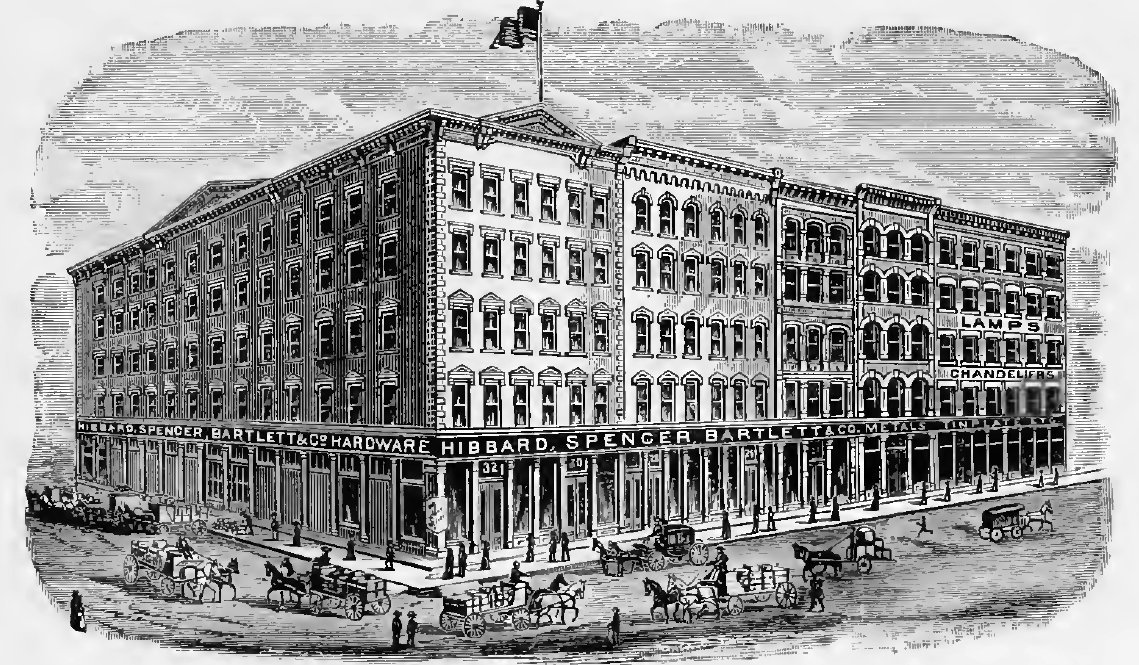 The business of the hardware house of Hibbard, Spencer & Co. was begun in the spring of 1855—twenty-six years ago—under the firm name of Tuttle, Hibbard & Co., and continued under that name until January, 1864, when William G. Hibbard and F. F. Spencer took the lines of the old firm and changed its name to Hibbard & Spencer.

From the beginning this house has always been a growing house. Each year they have made more than their expenses, except in the memorable year of the great fire. The business of the house has not been pushed to its present large proportions violently, or by spasmodic efforts, but is the result of a general, steady, healthy, yearly increase.

Since 1864 several juniors have been admitted to the firm, but they have all dropped out one by one, save only the present junior partner, A. C. Bartlett, who nailed his flag to the mast, and has stuck to the ship. 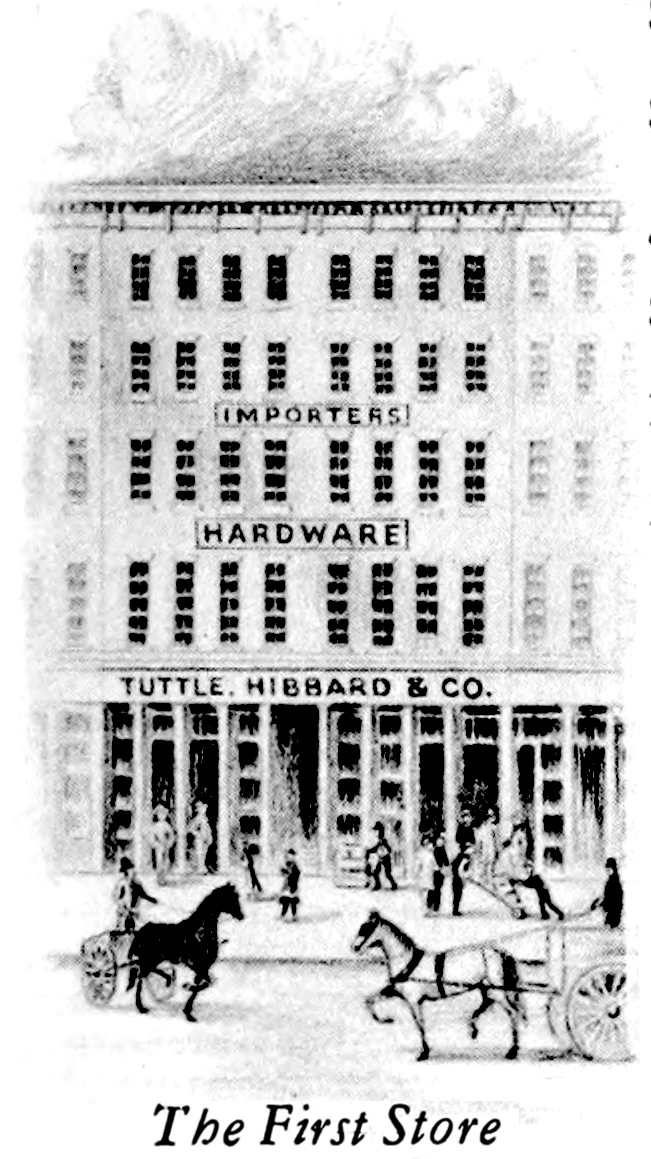 The minutiae of the business of this house has never been delegated to others, but has been kept in hand by the partners, all three of them being active men of moderate ambition, who has brought the business of the house to a point satisfactory to themselves in magnitude. In one respect they have been exemplars for business-men. Each member of the firm has always been found at his post at all reasonable hours of the day, attentive to the business of the house, and the correspondence of the house has been carried on directly with the customers by a member of the firm. The aim of the firm has been each year to have their stock more attractive than in the previous year, and they claim that under the roof of the present house any hardware dealer throughout the country can more nearly find the completion of his order than in other houses. The present firm at the inception of their enterprise established a credit that was valuable, which for many years in the past they have not used, having for a long period bought their goods practically for spot cash.

The rooms occupied by Tuttle, Hibbard & Co. at the beginning was one small store. The room now occupied by the present firm is 100 by 130 feet, full six stories high, and crammed to repletion with goods, and yet they are now cramped for room. The members of this firm are all young men, and hope to, and ought to, maintain their present prominent position among the commercial houses of the Nation.

The lesson to young men by the signal success accomplished by this house in the period of twenty-six years, is that the high road to honorable achievement and personal independence lies along the pathway of close, personal application to one business.

Hibbard, Spencer, Bartlett Co. is, without doubt, the leading hardware firm west of New York. It is located at from 18 to 32 Lake Street, its store extending 200 feet on Lake Street and 150 feet on Wabash Avenue, occupying the whole five stories and basement. It carries in stock from one to two millions of dollars worth of goods constantly, covering the whole range of the hardware trade. Its history extends over more than thirty-six years, during which it has practically led the business in Chicago. It was first started as Tuttle, Hibbard & Co., but in 1875 it was reorganized as Hibbard, Spencer & Co., and in 1882 was made a stock company under its present name. It employs nearly six hundred men in its six departments, and requires seven engines to run its machinery, elevators, etc. Its trade extends from the State of Ohio westward to the Pacific Ocean, and southward to the Gulf of Mexico, including a growing trade with the republic of Mexico. The officers of the company are Wm. G. Hibbard, President and Treasurer; A. C. Bartlett, Vice-President, and C. H. Conover, Secretary. The Directors are W. G. Hibbard, A. C. Bartlett, H. J. Sawe, C. H. Conover and E. G. Clark, with E. G. Clark as Cashier. 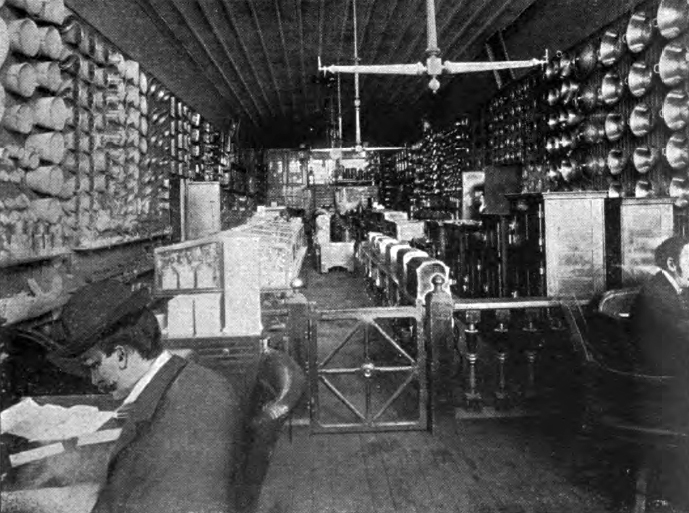 Interior of Hibbard, Spencer, Bartlett Co at 18-32 Lake Street (Wabash and Lake)
Circa1898 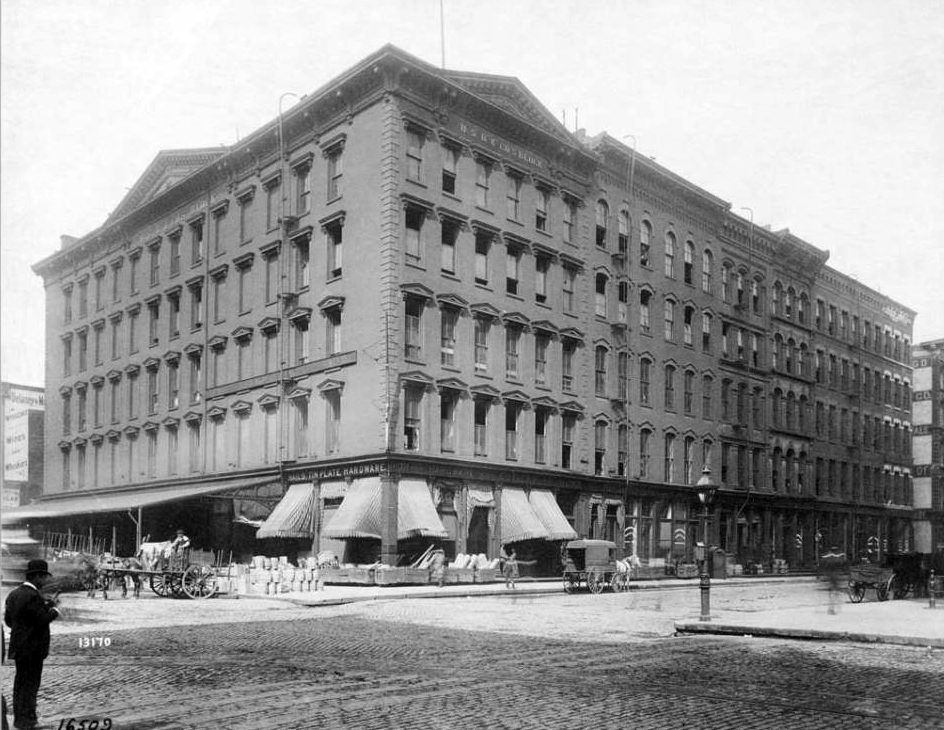 Marshall Field has bought from Mrs. Hetty Green the property 79 to 83 Wabash avenue for $350.000 cash. It adjoins on the north his present Wabash avenue building, and will be adapted at once for retail purposes. The sale revived yesterday the old rumor that Mr. Field contemplates an extension of his retail store to Randolph street.

The property acquired trom Mrs. Green is known as the Reed Block. It fronts east 72 feet and has a depth of 150 feet. Mr. Field’s Wabash avenue building has a frontage in Wabash avenue of 108 feet and in Washington street of 154 feet. A private twelve-foot alley separates this from the Reed Building, which adjoins the building occupied until recently by Charles Truax, Greene & Co., whose lease Mr. Field purchased, and north of that is a twenty-six foot lot to which Mr. Field already holds title. This brings him to the Trude Building, at the corner of Randolph street.

In State street the Field store extends from Washington street to Central Music Hall, in which, it is said. Mr. Field owns a majority of the stock. Although a vote of all the stockholders is necessary to dispose of the music hall property. it is believed by many persons that eventually Mr. Field will secure the needed consents to carry through his plan.

Although Mrs. Green has been a heavy holder of Chicago realty for many years this is said to be the first holding she has ever parted with. The price is on the basis of $4,861 a front foot. or $32 a square foot, allowing nothing for the building. The Tax commission’s valuation of the property was as follows:
Land at 8331.200 and the building at $71.060, making the total valuation $402.860.

Harry G. Selfridge, manager of Marshall Field & Co.’s retail store, said yesterday the building just purchased will be utilized at once for departments which need more room. Eventually it will be improved. Mr. Selfridge did not admit that other extensions of the store were in prospect. but Mr. Field has been credited with that ambition for some time.

In this connection it is interesting to note that the value of Mr. Field’s present holdings in the central business district. as determined by the Tax commission. is $23,983,500. They consist of twenty tracts of land, four of the most valuable being in State street.

The conveyance of the Wabash avenue property runs from the estate of Edward Mott Robinson. by Edward H. R. Green and Edward H. Green, husband and son respectively of Mrs. Green, and the trustees of the estate of Edward Mott Robinson to Mr. Field. The cash consideration of the transfer was deposited in the Chemical Natonal Bank of New York early in the week, the deal being closed there. 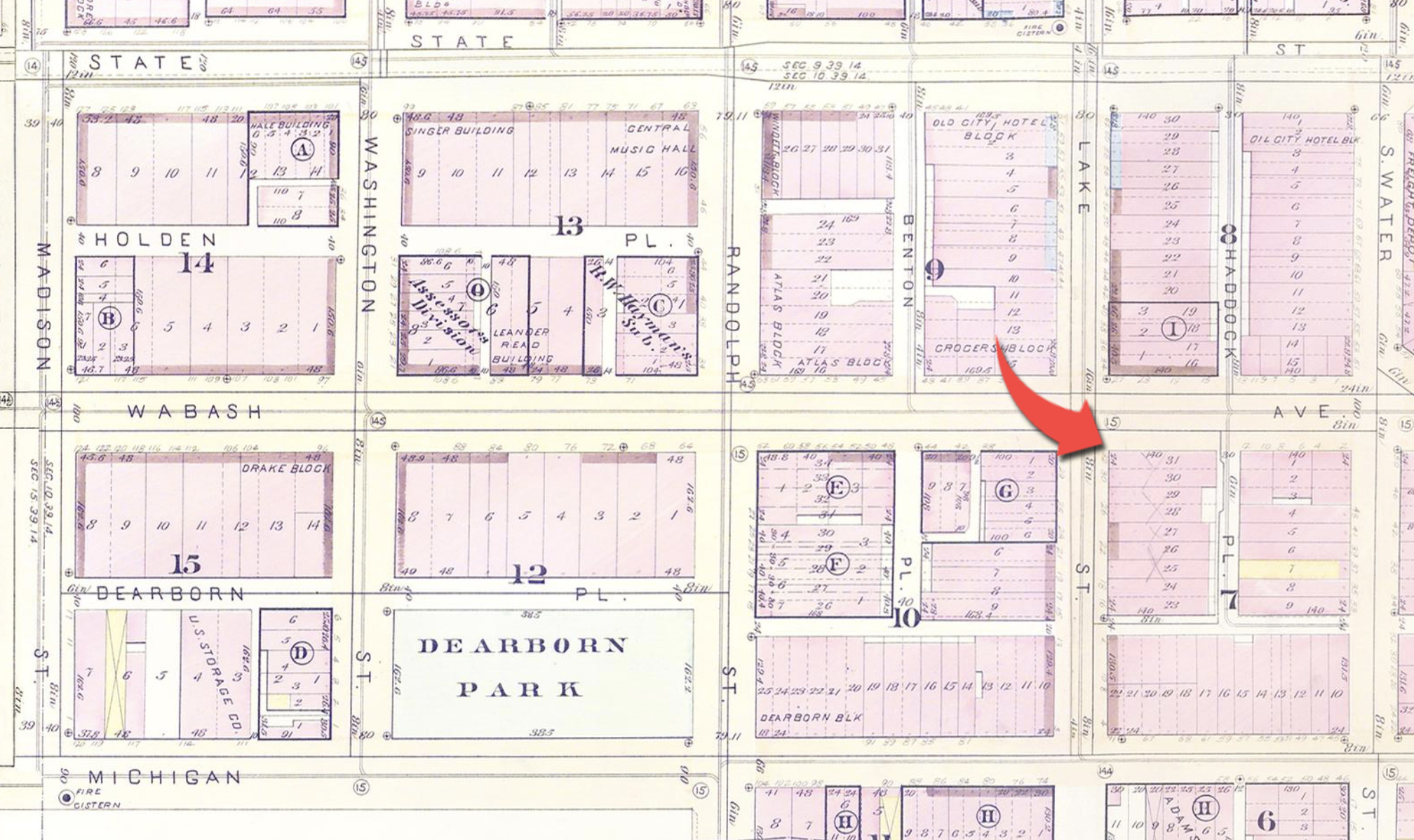 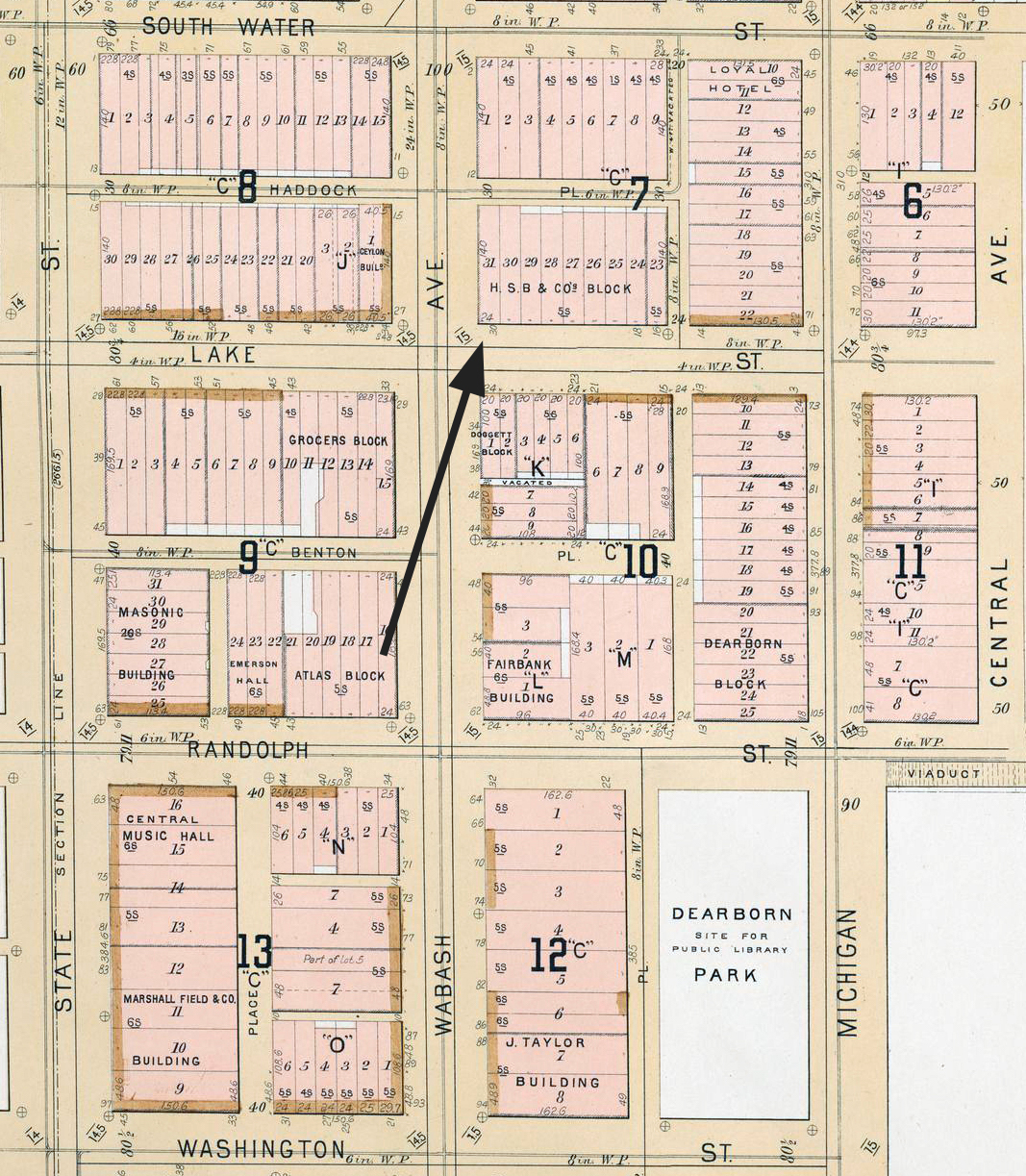 Aftermath
When Spencer died in 1890, the company was already among the leading wholesalers of hardware in the United States. In 1903, the year Hibbard died, the company opened a 10-story warehouse next to State Street Bridge in downtown Chicago. In 1932, the company introduced a new line of hand tools under the brand name “True Value.” By 1948, Hibbard’s annual sales reached nearly $30 million. Business slowed and profits were shrunk, however, as new hardware cooperatives began to bypass traditional wholesalers. In 1962, the company’s owners, who wanted to move into the real-estate business, sold the hardware operations and the “True Value” brand to John Cotter for $2.5 million. 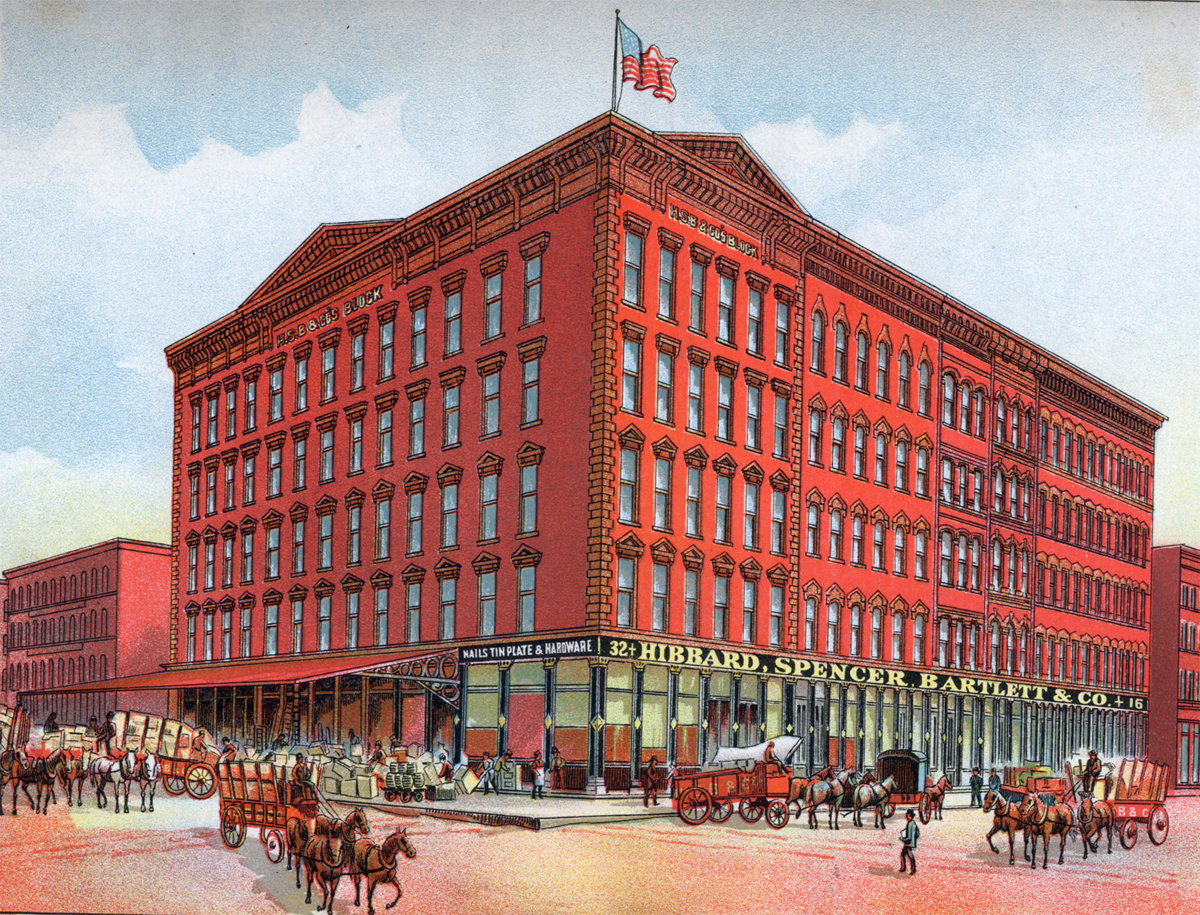 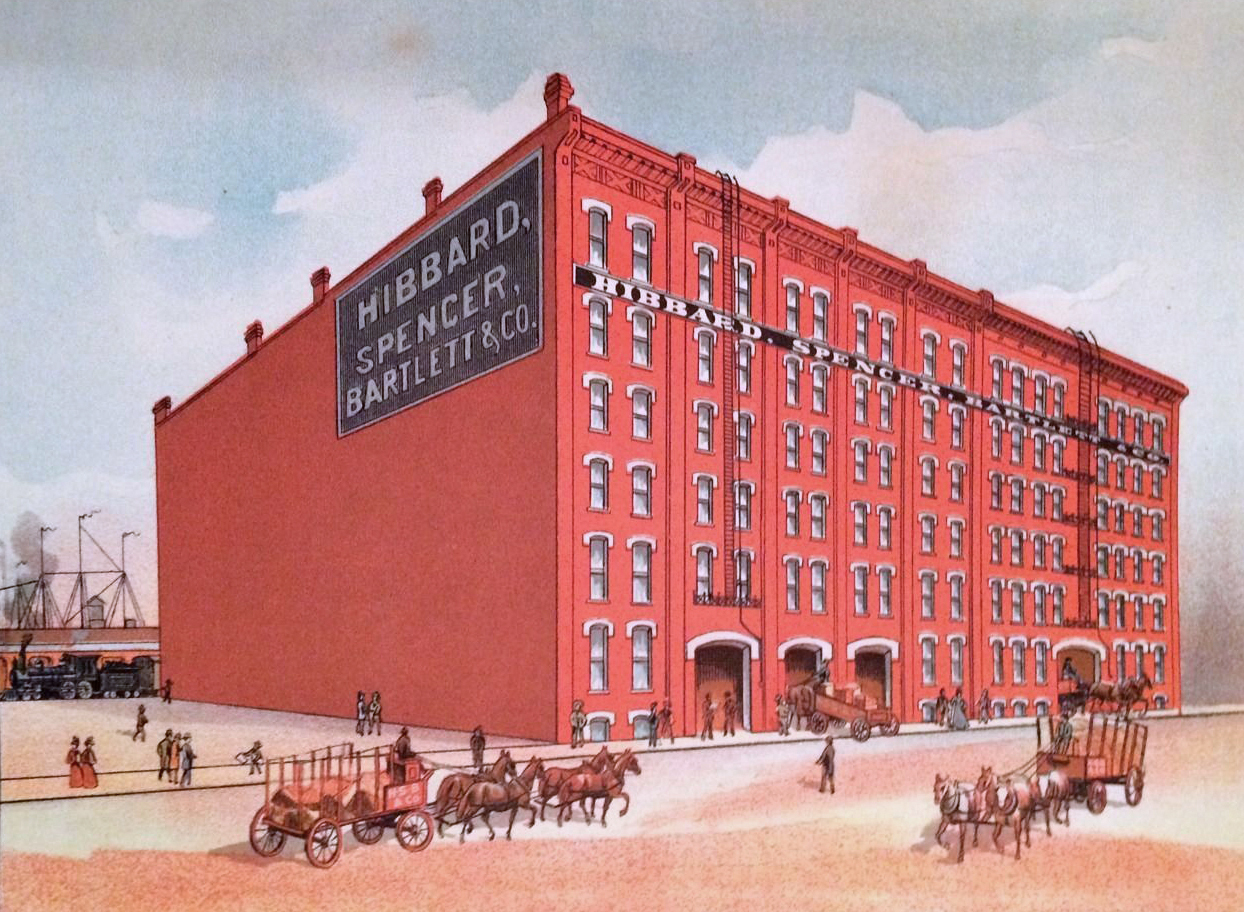 On April 20, 1985, the Hibbard, Spencer, Bartlett Real Estate Investment Trust of Evanston has completed liquidation of its realty portfolio and distributed more than $15 million to its shareholders.

Properties that were sold included an office-warehouse complex at 2201 W. Howard St., Evanston, and a seven-story office building at 200 E. Ontario St.

The Ontario Street building was sold in early 1984 to a partnership involving Jerrold Wexler and Edward Ross. Wexler and Ross are chairman and president, respectively, of Jupiter Industries Inc., Chicago.

The trust originated with Hibbard, Spencer, Bartlett & Co., which was one of the world`s largest wholesale hardware dealers. 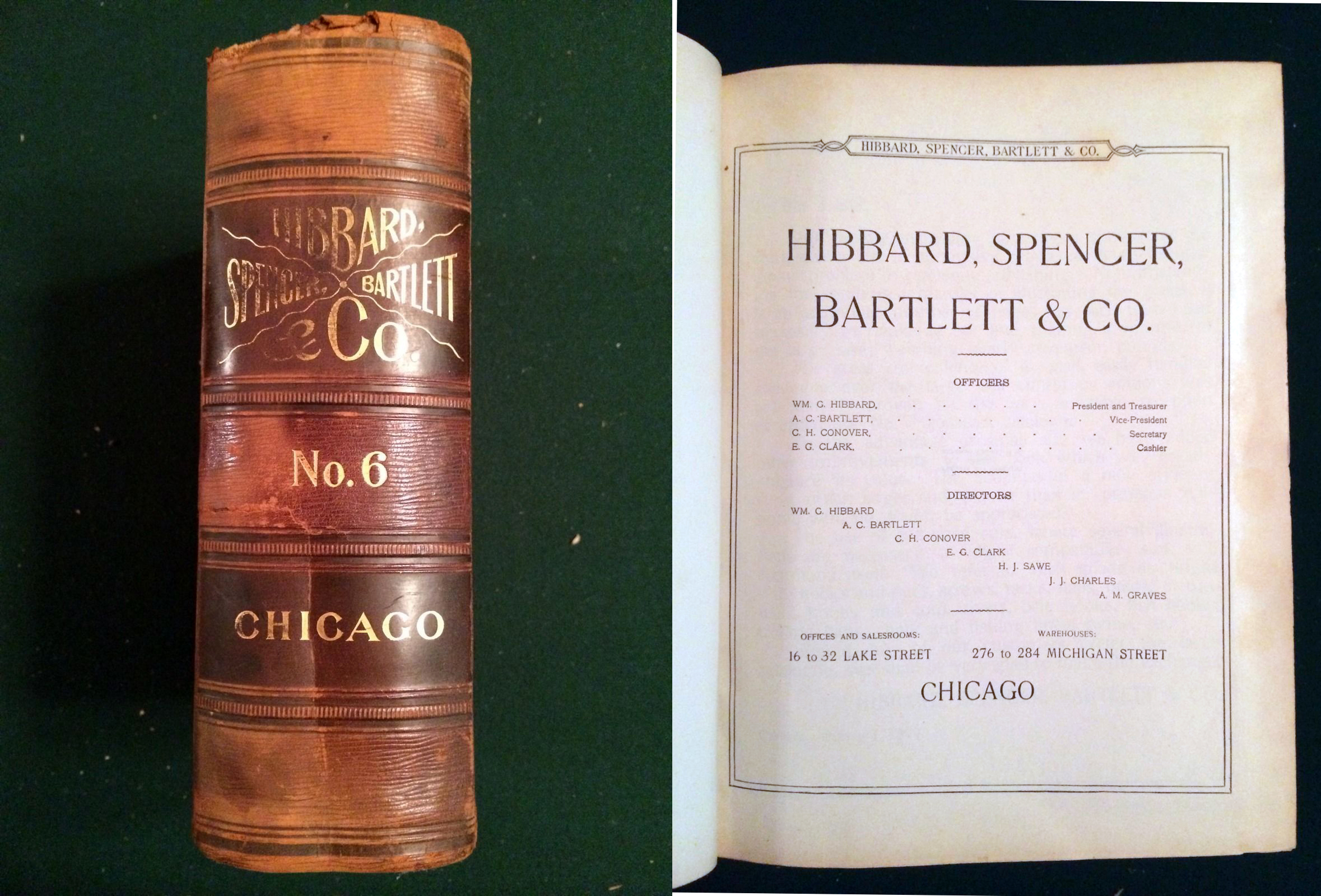