The Rosehill Cemetery was chartered February 11, 1859. The land was 500 acres lying 6-1/2 miles north of the City of Chicago. The cemetery was dedicated by the laying of the corner-stone of the chapel with Masonic ceremonies on 28 July 1859. The first interment was the remains of Dr. J. W. Ludlam on 14 July 1859.

Rosehill’s castellated entrance was designed by William Boyington who also designed the Chicago Water Tower. The name of the cemetery was supposedly taken from a tavern keeper named “Roe” and the area was referred to as “Roe’s Hill”. This story has remained unproven and is considered an urban myth. Rosehill has the most burial placements of Union Civil War soldiers in the Midwest. Rosehill Cemetery is located at 3800 Ravenswood Avenue. 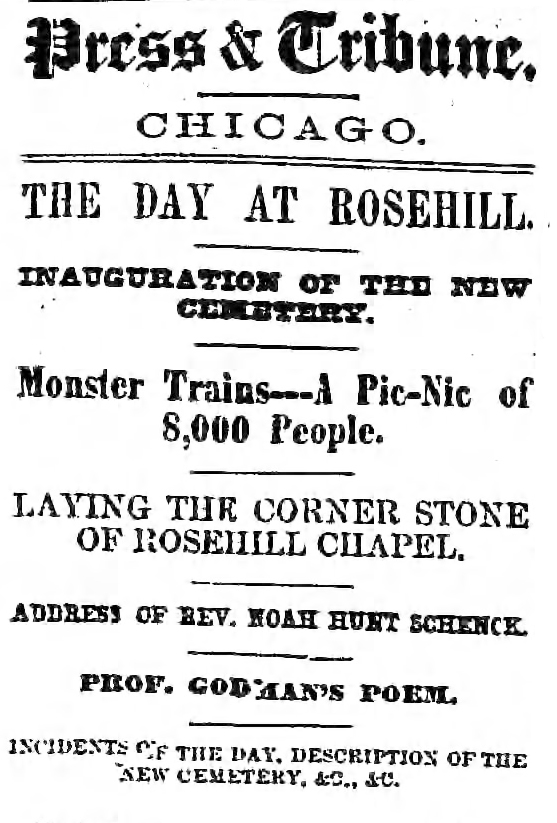 Yesterday was an occasion long to be remembered in the annals of our city, as happily a new, noble, and long-needed enterprise. The question that has long been agitated and discussed seems answered, and finally. The voice of our city having united as the voice of one man in remonstrance against further interments within the fast springing residences that are filling our northern suburbs, and the evil, the positive danger of continuing to bury our dead thus among the homes of the living, the events of yesterday place on record how well the appeal has been met.

We believe a few years will constitute Rose Hill one of the most attractive and beautiful of Cemeteries, and see springing among its oak groves the monuments of taste and of remembrance of the departed, who are year by year to bind the city to this by ties and associations continually gaining in power and strength.

Rose Hill is in the town of Chittenden, six miles and a half north of this city, on the Chicago and Milwaukee Railroad, the present station being directly opposite the Cemetery, the enclosure of which lies to the westward of the track. It is reached, also, by two good roads—one along the lake shore, the other the prairie road following up the North Branch to the west ward of the ridge.

The prairie on which our city stands lies smooth and level as a threshing floor for miles about us, and to the northward the first change of soil and surface is where, within the palings of Rose Hill, the rich black loom of level meadow or wet prairie, changes abruptly into a light dry yellow soil, overlying a gravel ridge, which in its greatest altitude is from seventeen to twenty feet above the adjacent prairie on the south and east. Thus is it especially fitted for the purpose to which it is now consecrated. This ridge is crowned by a fine grove of oaks. It extends northward and westward giving a total capacity of area of some four hundred acres or more should it ever be desired to extend the Cemetery to such limits. 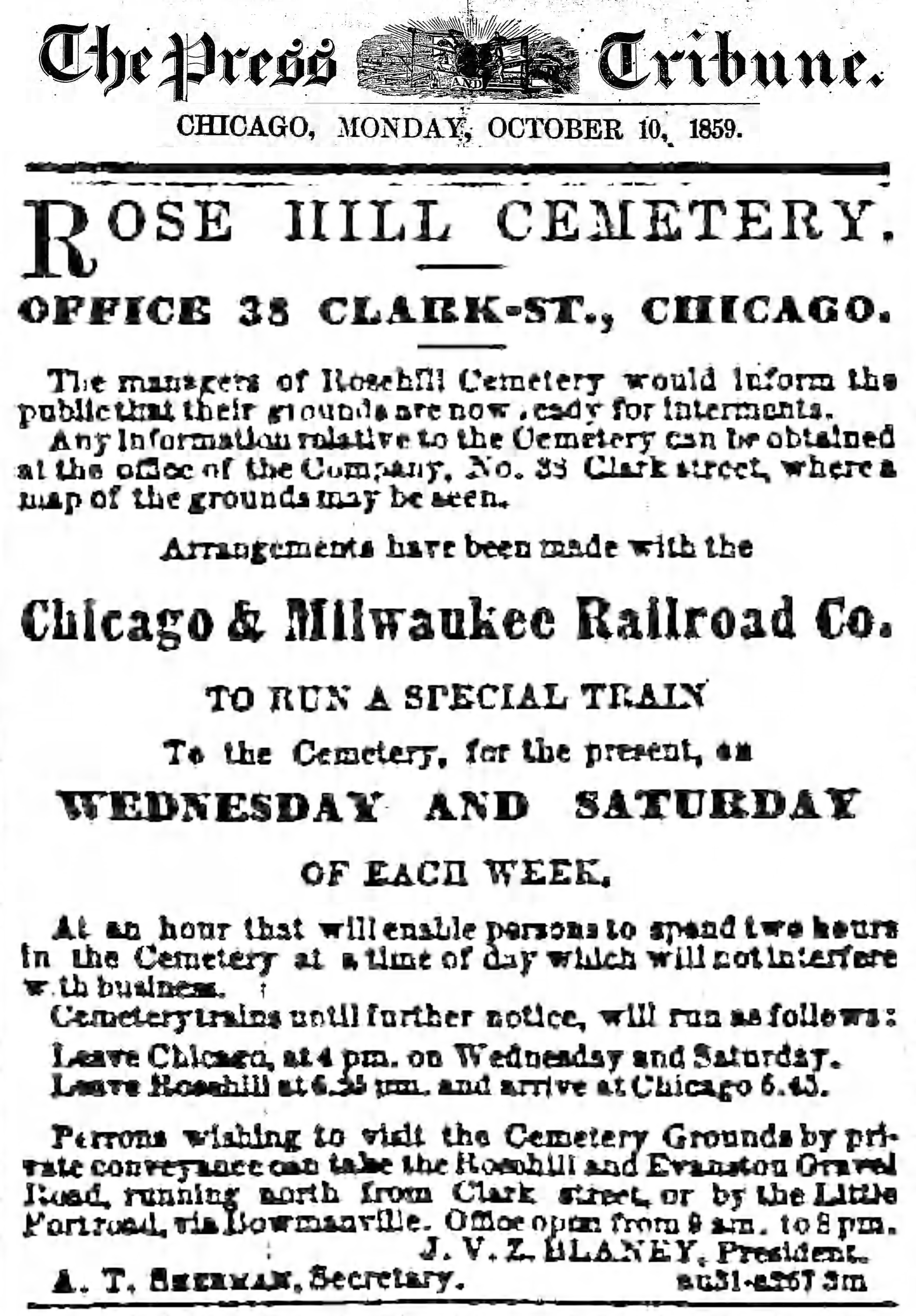 From History of Chicago, by Andreas, 1884

Rosehill has a magnificent entrance arch, a capacious receiving vault, and a spacious chapel. A steady flow of clear water is obtained from an artesian well; a number of artificial lakes have been formed; there are large and handsome greenhouses and conservatories; the avenues, drives and walks are constructed to be durable and permanent; and the grounds are well tended. About two hundred and fifty acres of the grounds are thus improved, and the interments up to date number nearly 30,000. By an amendment to the charter, the company is required to pay ten per cent, of all proceeds to a perpetual care fund, which now amounts to about $35,000. The trustees of this fund
are Charles B. Farwell, Orrington Lunt and Henry F. Lewis. The present officers of the company are Frederick Tuttle, president; William H. Turner, vicepresident and auditor; Van H. Higgins, treasurer; and Joseph Gow, secretary and superintendent. 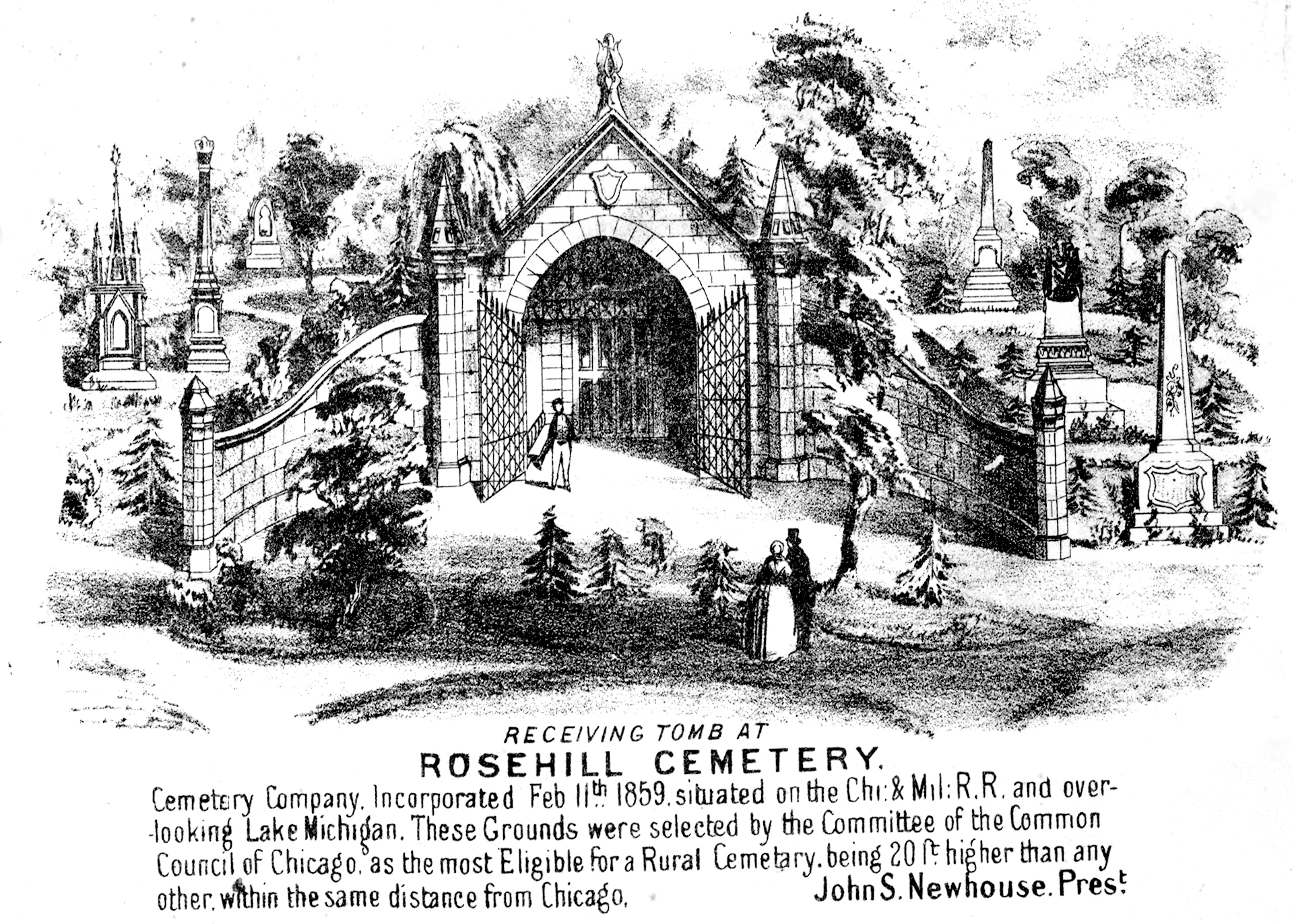