Rarely is our title page graced by so beautiful a structure as that which occupies it this month, for seldom have our architects produced so graceful and pure a design. Its location is at the north-east corner of Randolph and State streets, a prominent point, where it is surrounded everywhere by noble buildings. This edifice is being erected by Arthur W. Windett, Esq., the distinguished lawyer of this city, and he will surely bear off the palm for having constructed one of the architectural gems of our new Chicago, by the efficient aid of Messrs. Dixon & Hamilton, who drew the plans, and under whose supervision the work is being done. These architects have erected some of the best of our new buildings, among them the La Salle building and the Major block, both of which have few equals on this continent for beauty of design. In the Windett building they have produced a design that will render them famous, for surely the Renaissance in architecture has never been more beautifully wrought out. 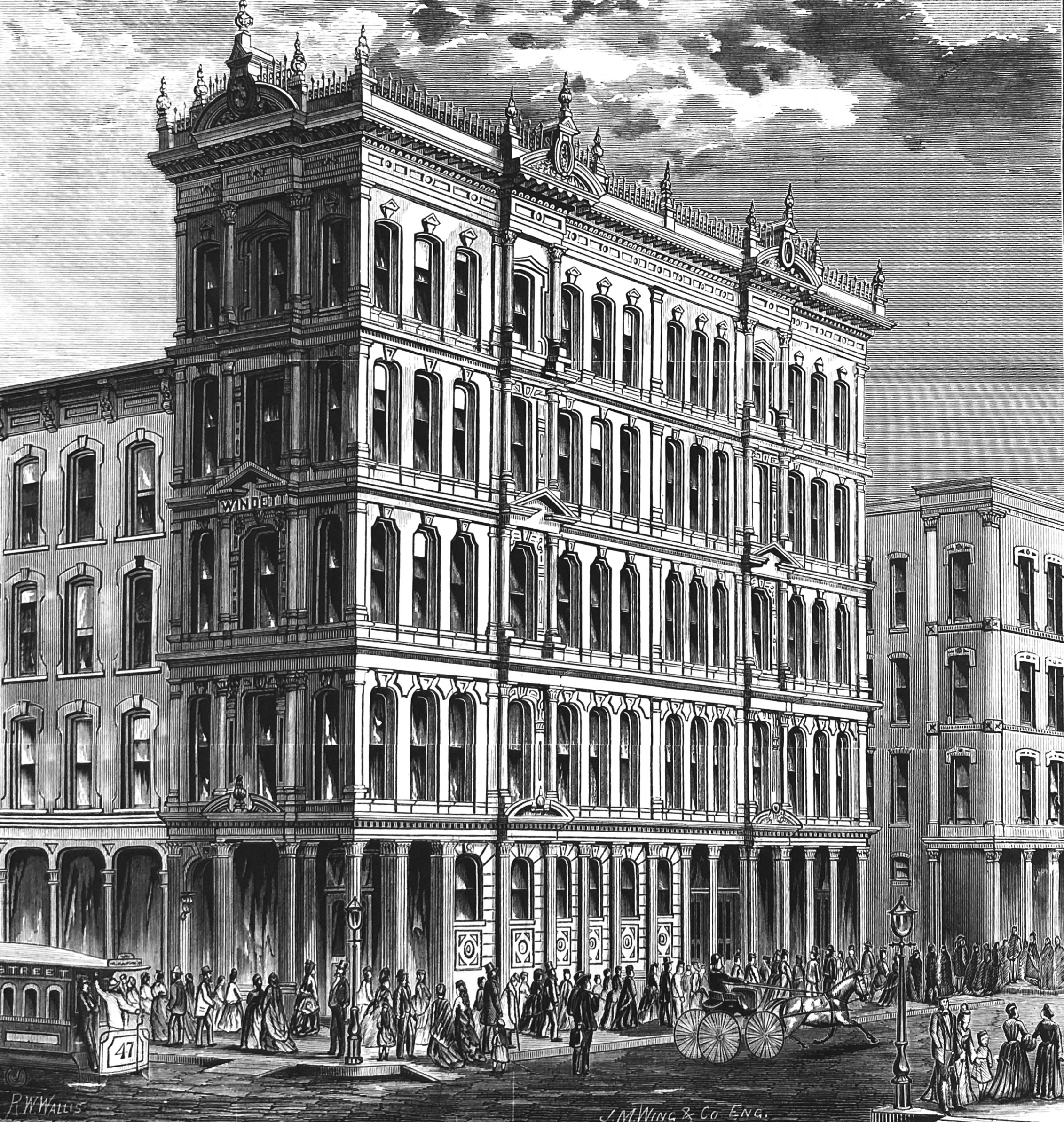 The stone used in this structure is from the St. Genevieve quarries, a pure flesh colored sand stone. It is the same material as that used in the Academy of Science building on Wabash avenue, and for the trimmings of the Portland Block. The building is 24 feet six inches on State street, by 113 feet four inches on Randolph, five stories and basement in height, with massive iron columns, galvanized iron cornice, etc. It will be finished inside for wholesale jobbing purposes, to which the locality particularly adapts it, its size being sufficient to accommodate any of our largest houses. The first styory is 16 feet 3 inches in the clear, the second 14 feet, third 13 feet, fourth 12 feet, and fifth 11 feet. The openings are large and will be set with French plate glass, rendering the light perfect. The entire cost will exceed $55,000, and the building will be completed by September 1st. An examination will show the foundations are very heavy and insure to the massive superstructure of iron and stone which rests upon them adequate support, Messrs. Dixon & Hamilton never yet, as far as we know, having had one of their buildings settle. 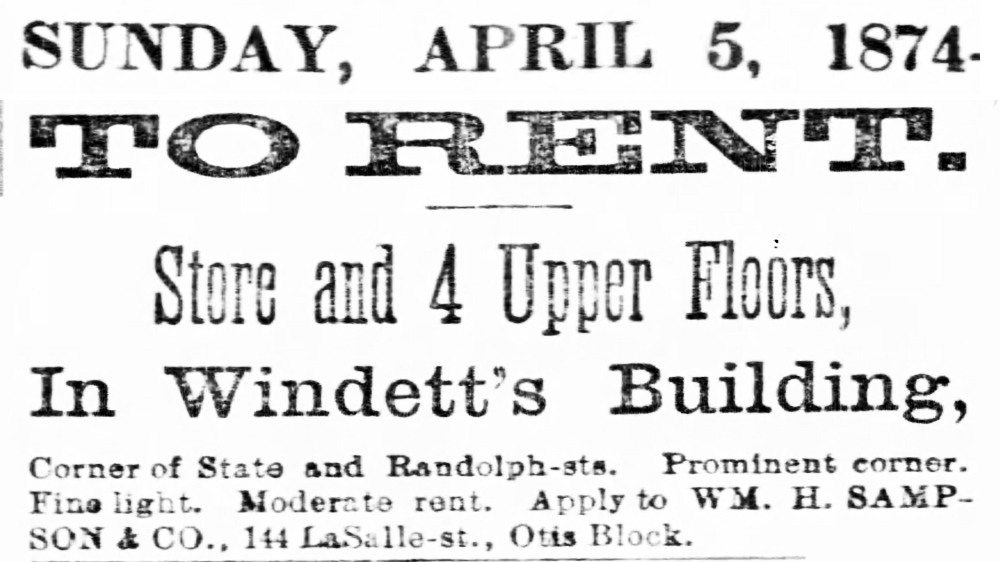 State street from Lake to Adams, now presents the finest continuous row of buildings to be found in the world. Mr. Windett, in this structure, is adding another star to imposing galaxy of facades. To our own eye, his building is the purest and most classic of them all, rich in its shadows, quiet in its boldness, and yet possessing an air of solidity and strength that few structures have. His personal attention to the details of construction, his determination to erect a thoroughly good building, together with the conspicuous success which he has attained in this undertaking, entitle him to a front position among the long list of men whose liberality and perseverance have rebuilt our glorious city, now prouder than Athens of its marble pieces.

Messrs. Wm. H. Sampson & Co. are the agents for renting this fine property.

The Windett building, which occupied the site of the new Masonic Temple, was erected after the fire in the Renaissance style. The owner mortgaged this property to the Connecticut Mutual Life Insurance Company at the time of building. The insurance company, through the United States court, foreclosed the mortgage and secured possession of the property. Later the company sold it to the West Division Street Railway Company, which company leased it to the Chicago City Railway Company. Windett brought suit in the circuit court of Cook county to redeem this property, claiming that the insurance company had not properly advertised the foreclosure sale, and also that said company had agreed to extend the time at a reduced rate of interest. The circuit court decided against Windett, and he appealed to the appellate court. Again he lost his case, and then he took it up to the State supreme court, and on October 31, 1880, that tribunal filed an opinion confirming the decision of the lower courts. The suit of Frank Bay for the specific carrying out of the contract to sell the property to him, made by C. T. Yerkes, ensued, and ultimately it became the property of the Masonic Temple association. In 1891 the work of constructing the Temple was entered upon, as related in the pages devoted to modern buildings. 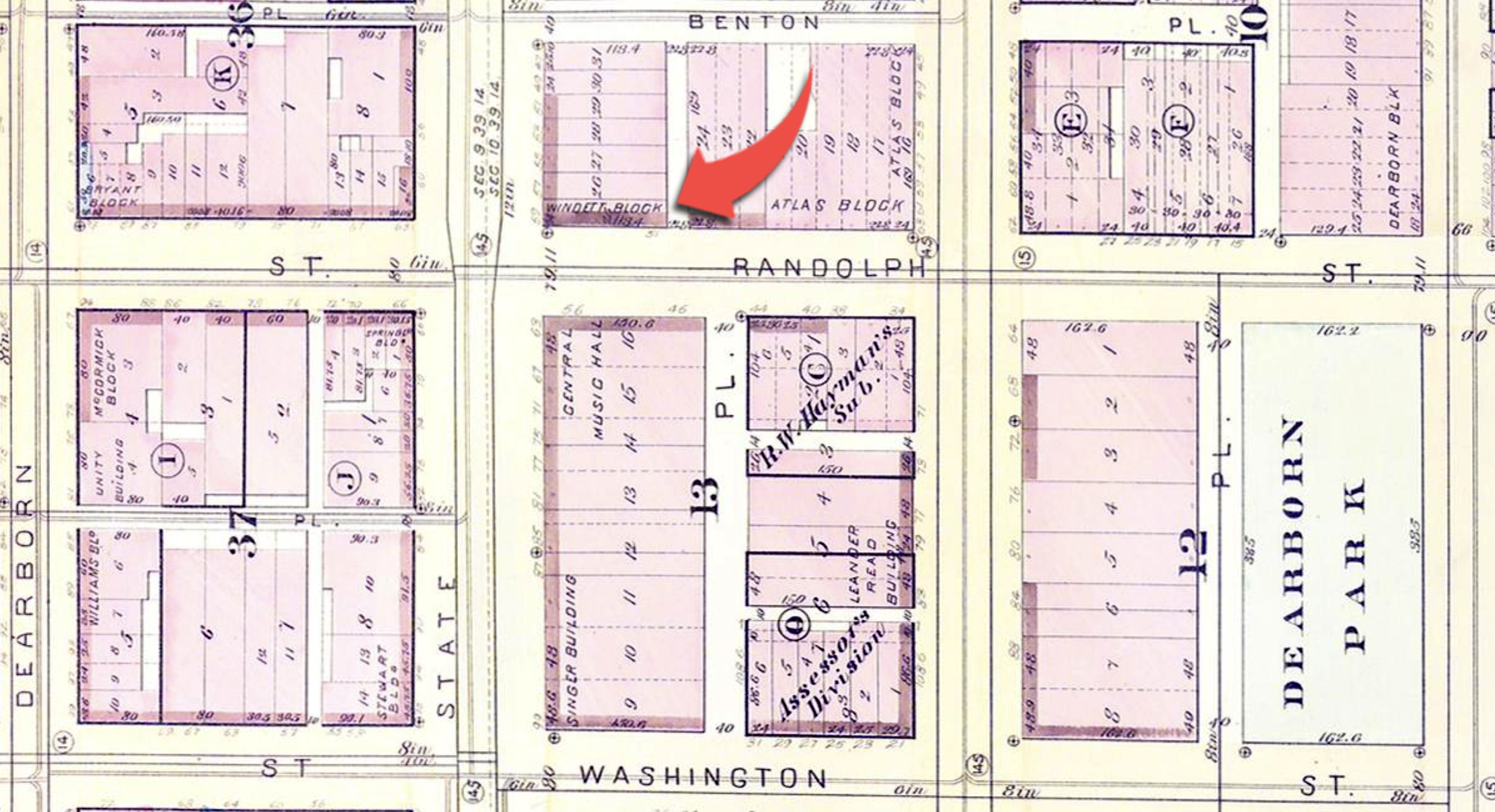