The Staats Zeitung, its History and New Building.

Since a few days, the Illinois Staats-Zeitung has been once more master in its own home. Complete possession has been taken of the new building and the machinery has been tried out. At such a moment a brief historical retrospect will not be amiss.

On the morning of October 9, 1871, the Illinois Staats-Zeitung shared the fate of thousands of its readers. They made a quick exit out of their building and forgot to take their possessions along. Everything was destroyed and nothing remained but the name. The Illinois-Staats-Zeitung had the satisfaction of learning that its name meant something, for the appearance of the first number was greeted with jubilation.

On account of the fire only one number could not appear. The Monday number that was already half out of the press, but on Wednesday morning October 11, the first small sheet printed, on one side, was in the hands of the German citizens. While even great English papers, like the Times, were quiet for weeks, the Illinois Staats-Zeitung appeared regularly in a constantly larger size. Our readers know under what conditions we worked in those years. The editorial staff was in Chicago and the printing press in Milwaukee, so that the telegraph had to be used constantly. October 12, the paper appeared in two pages with five columns; October 13, there were six columns; October 14 , there were four pages and six columns. Fifty days after the fire the paper had reached its old size, and due to the use of smaller print the reader disposed of more reading material than he had previously. All this work was done in much too narrow rooms. But our new building located at the Northeast corner of Washington Street and Fifth Avenue, can compare with the palaces of the English press. 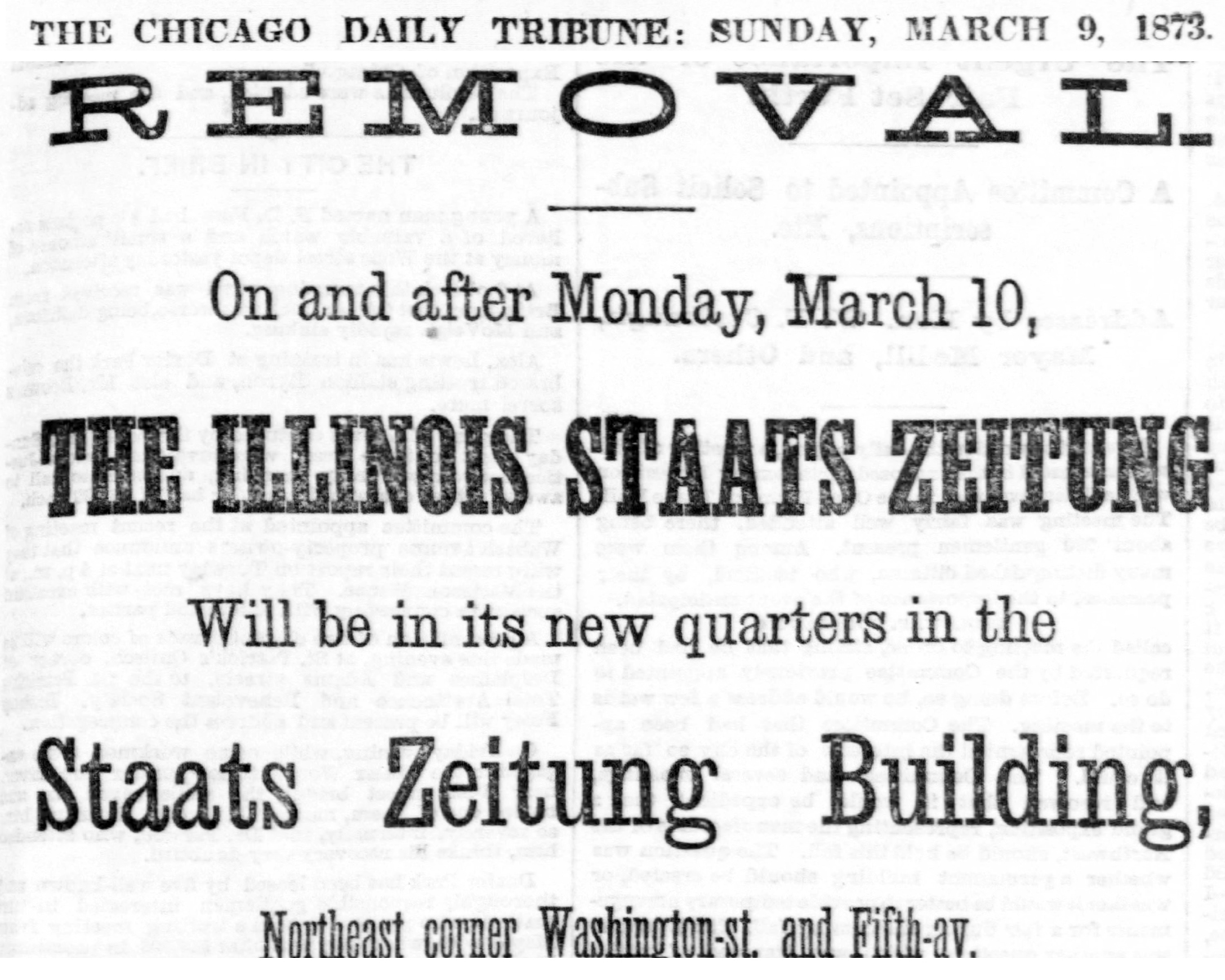 HISTORY
The Illinois Staats-Zeitung is a quarter of a century old. It was founded in 1848 by Robert Hoffgen, who is now enjoying the evening of on a sugar plantation in South America.

Before the Illinois Staats-Zeitung a little weekly existed, the Volks-freund, founded two years previously by Hoffgen and sold by him to an immigrated Ecclesiastic from Switzerland by the name of Waldberger. The Volksfreund had about seventy weekly subscribers. It was bought for $400. When this weekly ceased to appear is not known.

The staff of the Illinois Staats-Zeitung comprised the owner and an apprentice, John Simon. While the apprentice was setting the type of the paper, the owner would ride over the unpaved roads in the neigh-boring countries endeavoring to secure new subscribers.

The home of the publisher was the newspaper ‘s office, his bed a pile of old newspapers. The apprentice received a weekly salary of 75 cents.

Arno Voss took the place of Dr. Helmuth after the elections in the fall of 1848. Hermann Kriege became editor and business partner of Hoffgen in 1849. He had gained fame as a Communist writer, but derangement of the mind soon forced him to give up the editorship, which Dr. Helmuth took over once more.

We have the numbers for the first months of the Daily Illinois Staats-Zeitung lying in front of us. It is a small paper, the size not larger than that of the New York Literary Journal. Of the four pages of the newspaper, two are filled by advertisements and two by reading material. 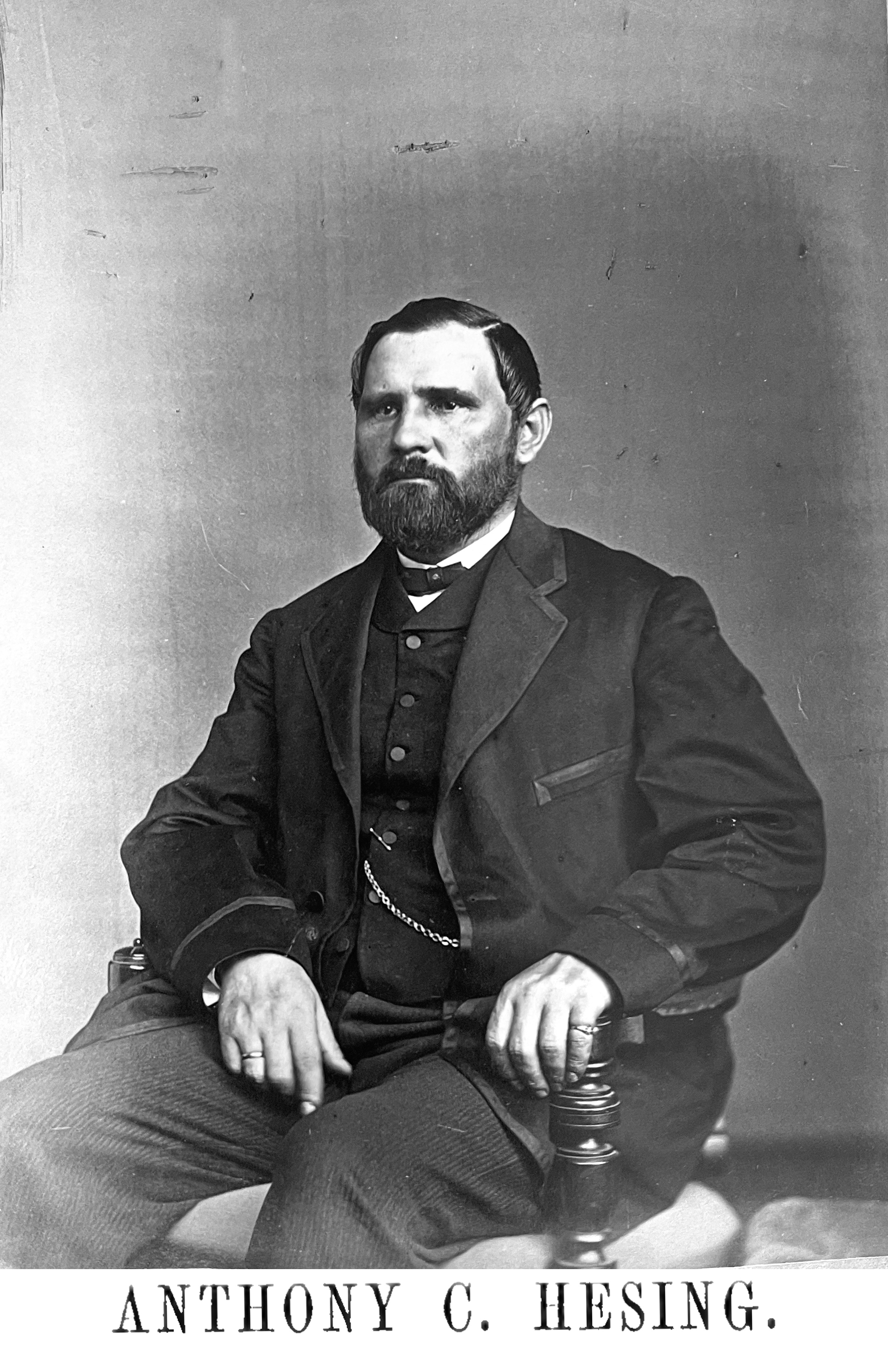 The paper was delivered at the homes for ten cents.a week. Instead of printing 300 copies, only 150 were printed. These 150 were brought by boys to the homes. The next day the boys would retrieve those papers and then bring them to the other 150 subscribers. As there was no question of news, everybody was satisfied. The publisher saved paper and the subscribers were not too exacting. Telegraphic news were still unknown in those happy times. The offices of the paper were transferred in 1851 to 160 Randolph Street, later to 12 S. Wells Street, from there to the building erected by the paper on La Salle Street and most recently to 104 Madison Street.

Since 1853, the editorship has been held by Georg Hillgartner and Georg Schneider. The latter (Georg Schneider) had in the meantime become a business partner.

In 1861 Mr. Schlaeger resigned the editorship of the paper. In his place Wm. Rapp was appointed as Chief Editor and Lorenz Brentano as assistant editor. Mr. Hoffgen’s desire to retire gave Mr. Brentano an opportunity to buy the share of the retiring part owner with the help of A. C. Hesing, who at that time was Sheriff of Cook County. When the following year, Mr. Schneider, who had become Tax Collector, also retired, A. C. Hesing took over half of the business.

In the Spring of 1867 A. C. Hesing became the sole owner of the paper. 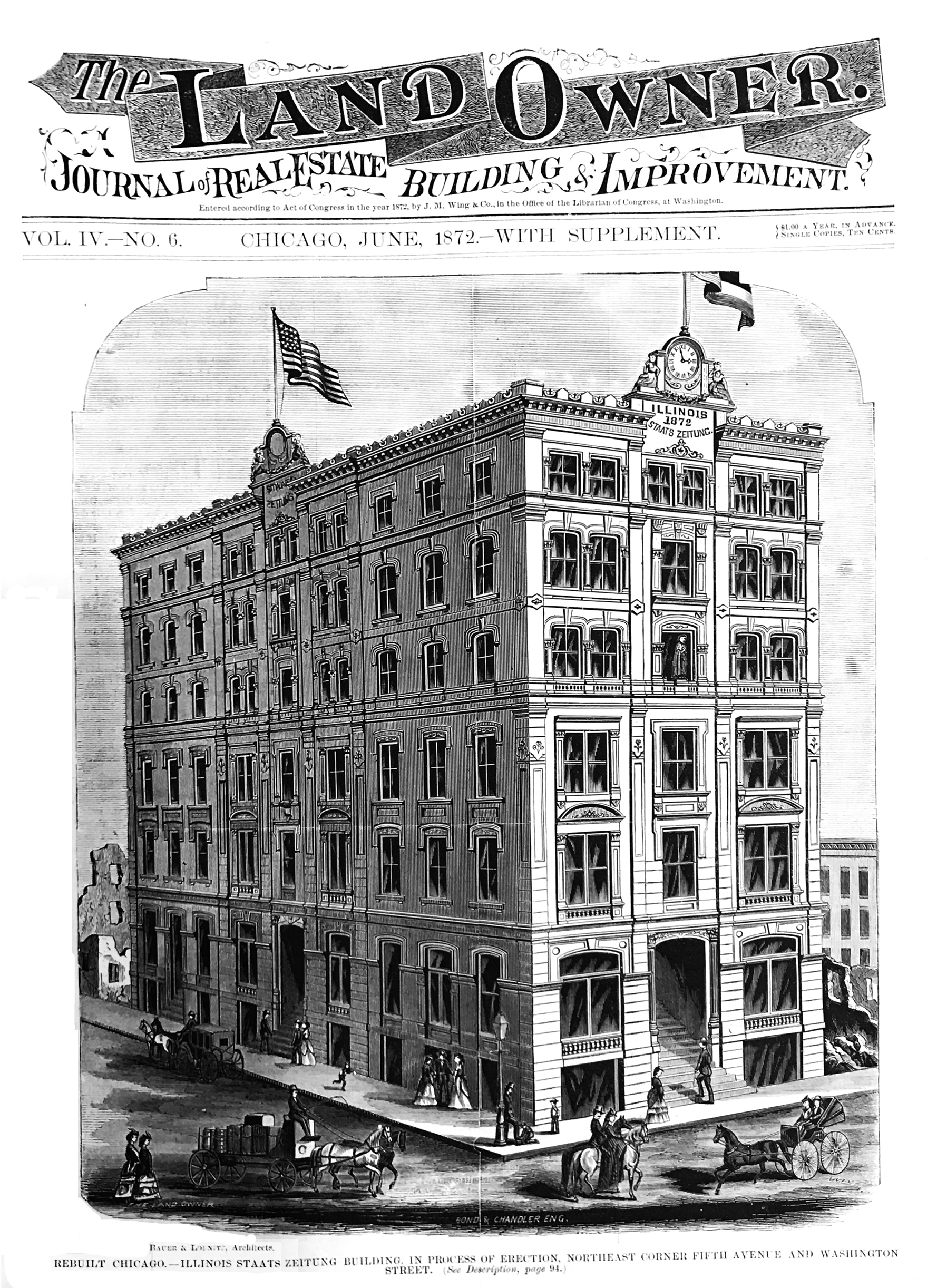 The Staats-Zeitung Building
Is a prominent and tasteful structure of the old style, across from the Times, at the northeast corner of Washington Street and Fifth Avenue. Various statues adorn the trades, and the prosperity of the oldest German daily newspaper of the West has lent its mark to the surroundings. On Washington Street there are 40 feet; on Fifth Avenue, 110 feet. The 6 stories carry the cornice to a height of 90 feet, and the presses may be seen in the basement. There are 30 offices, with 1 elevator. The building was erected by A. C. Hesing, who, before the Great Fire, was called ” Boss of Chicago,” owing to his paramount political influence. The paper is now conducted by his son, Washington Hesing. The buildings just east of the Staats-Zeitung have long been famous as lodge-rooms and meeting-places of all kinds of societies, but particularly of workingmen with political aspirations, Knights of Labor, and others. 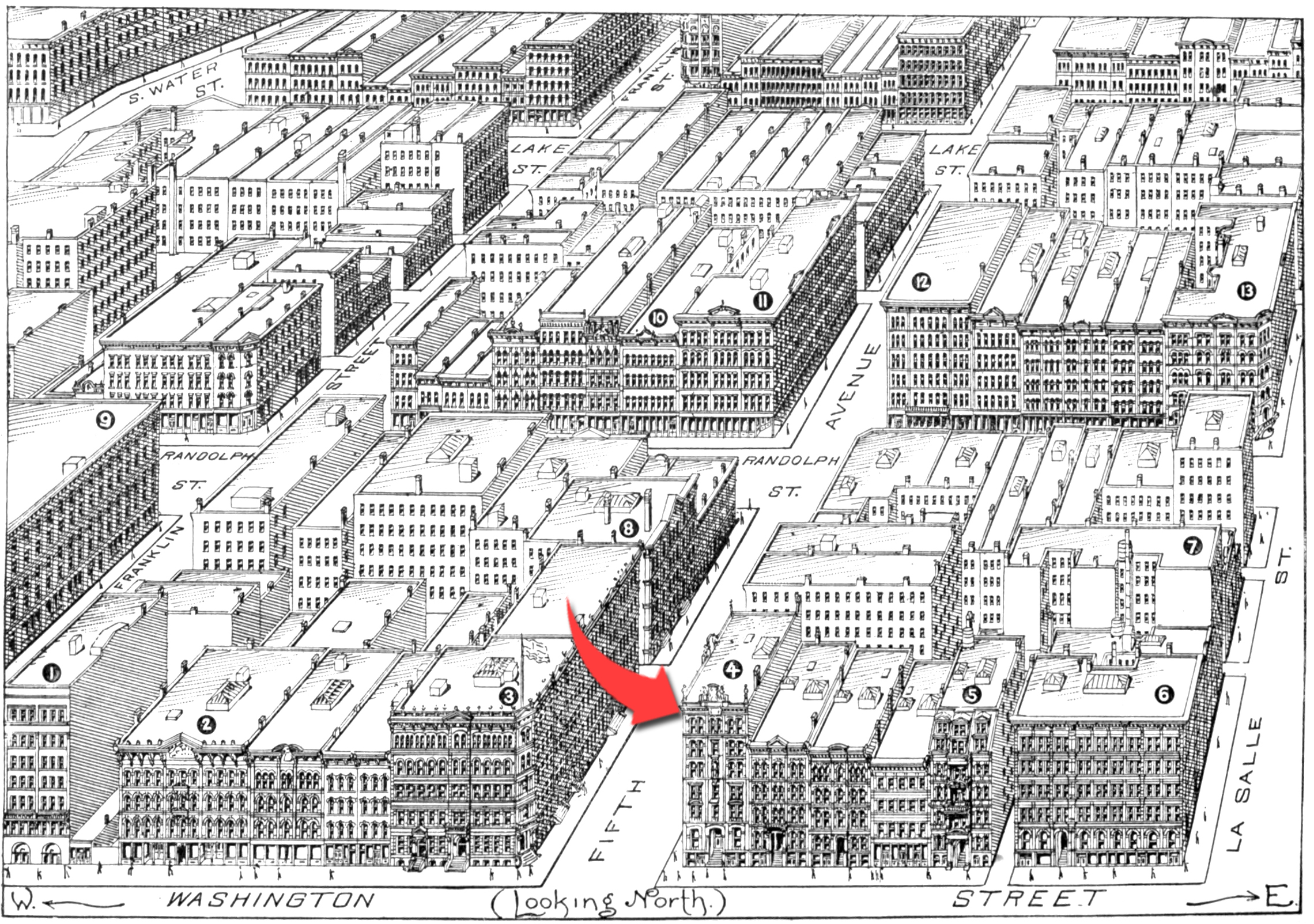 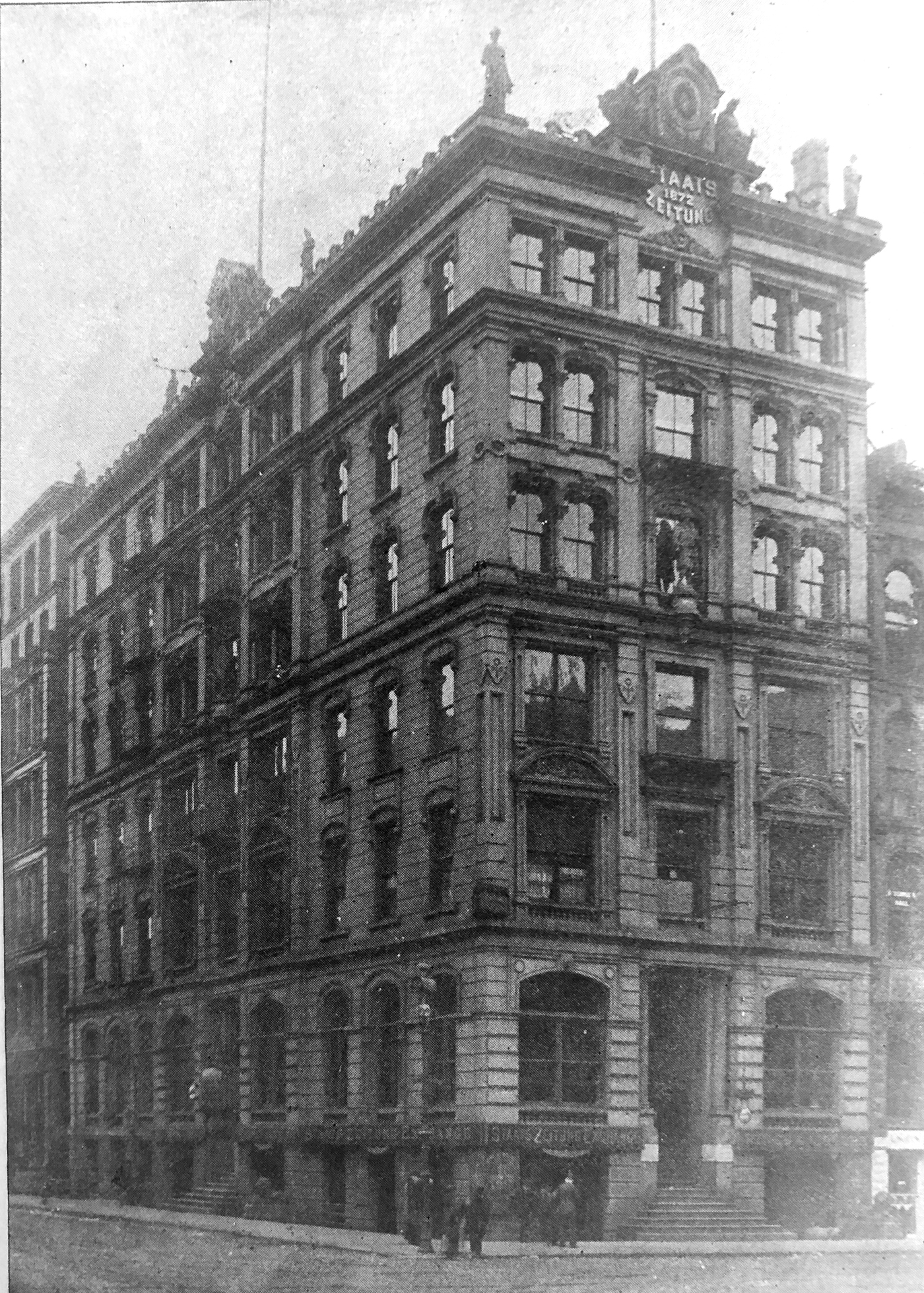 Chicago And Its Resources, Twenty Years After, 1892

The Illinois Staats Zeitung is a good representative of German-American enterprise and thought. It was founded in 1847 by Robert Hoeffger, who seems to have been a genuine Pooh Bah,1 combining in his own person the functions of editor, advertising solicitor, circulator, typo and pressman.

At the beginning of 1851 the paper boasted seventy subscribers. The combined daily circulation of all the editions is now 97,000 copies. It now occupies its own building, which cost, along with its equipment, fully $300,000. The Illinois Staats Zeitung was the first German paper to discover republican principles in the Buffalo platform of 1848 and afterward it antagonized the Nebraska bill, and led the Germans into the Republican party, fighting hard for Freemont, and afterward for Lincoln. Latterly it has been a power in municipal, county and state politics. There is but one German paper with greater wealth and circulation, and none surpasses it in ability, influence and popularity, with myriads of German readers all over the United States. 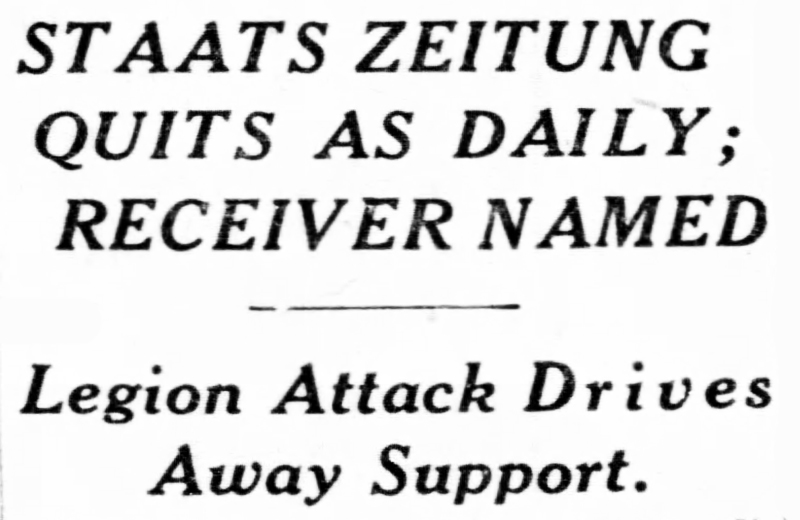 Less than three months after its editors had published an article declaring the American Legion is made up of “bums and tramps,” the Illinois Staats Zeitung yesterday passed into the hands of a receiver. It will continue publication as a Sunday newspaper only.

Failure of the newspaper owners to discharge Arthur Lorenz, author of the offending editorial, was given by Frederick W. Beech, formerly advertising manager, as one of the reasons for the company’s failure. He said he had been refused advertising contracts by several big firms when he admitted Lorenz was still employed.

Asked if the new management would continue to employ Lorenz, against whom action has been begun by the federal government, Attorney Reed said the matter of asking for his resignation was under consideration.

Sydney Spielman, son of a New York politician, purchased the newspaper for $25,000 last March, following receivership action. In December an editorial appeared under the headline, “Die Feinstein der Feine.” Among other things it called the American Legion an “institution bought with British gold to suppress the truth, to gag freedom of conscience, and to betray organized labor.”

Immediately following its publication, Palmer Edmunds, then commander of Blackhawks post, caused suit to be filed against the company for $100,000. 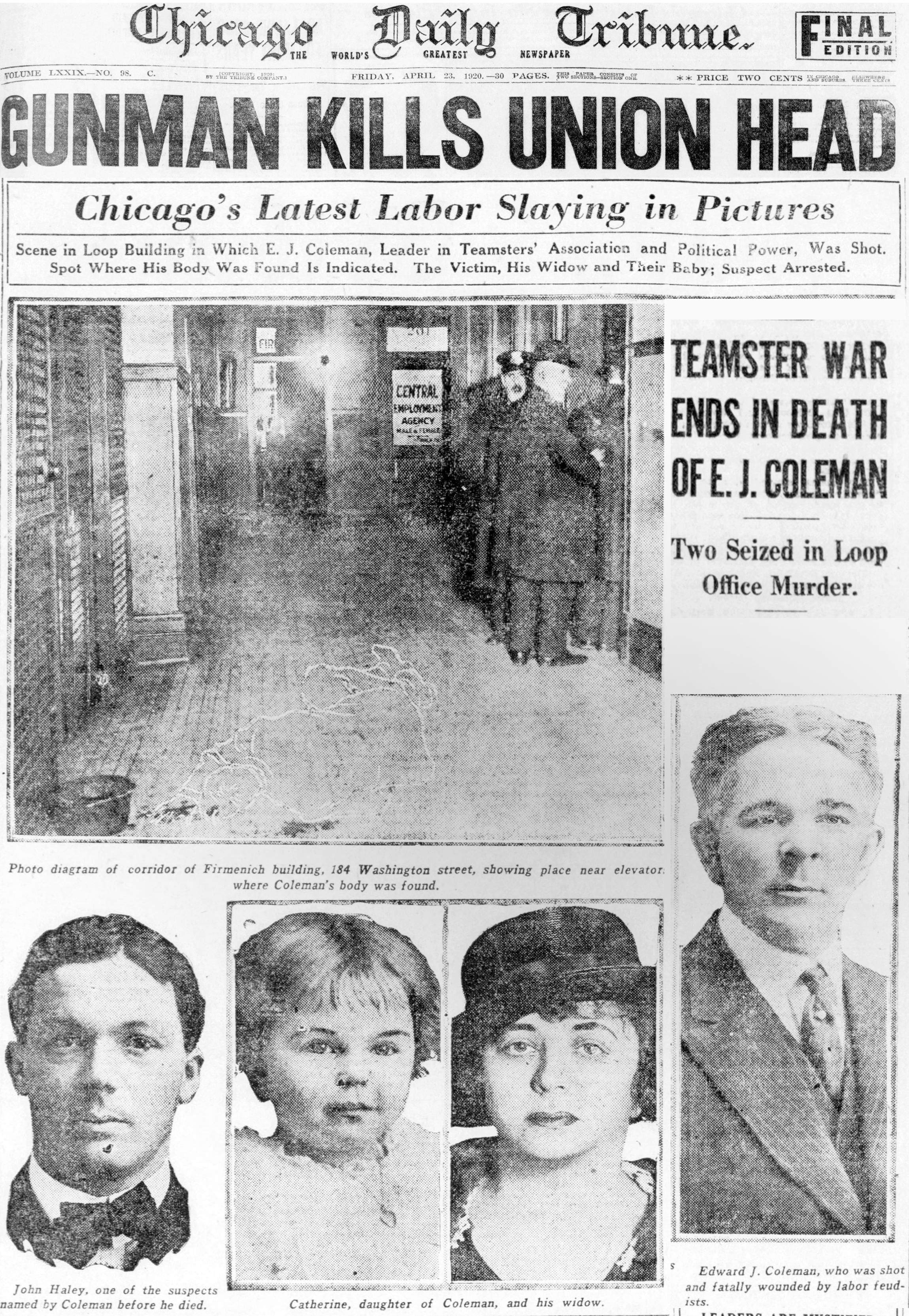 Murder in the Firmenich Building 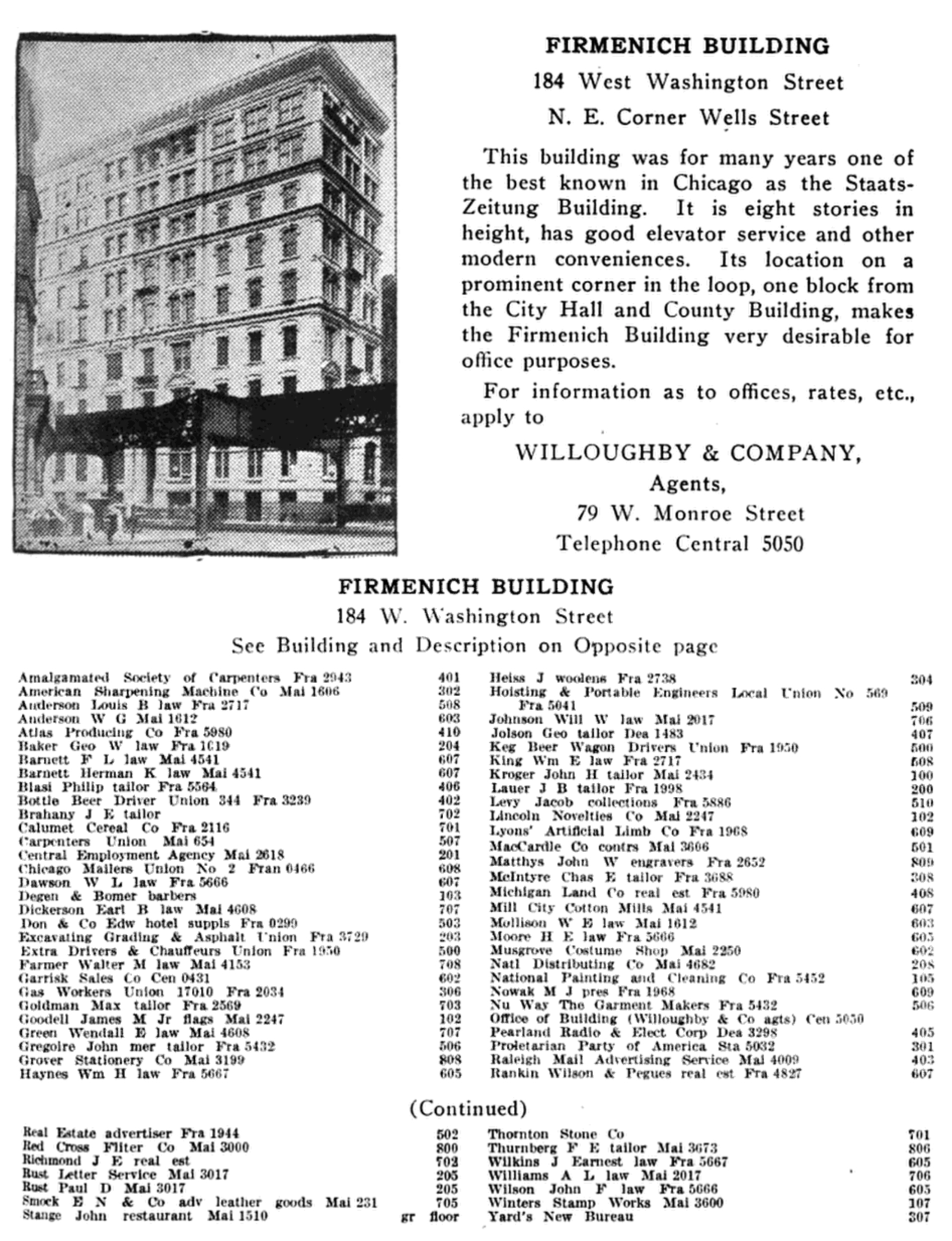 REAL ESTATE NEWS
The property at 184-188 W. Washington st. has been sold by Irving Winter, executor of the estate of Florence Winter, to the American National Bank and Trust Company of Chicago as trustee. The eight story brick and stone building was built in 1873. George S. Lurie company and Eli Geiger were brokers. The price was not given.

1 Pooh-Bah, a character in Gilbert and Sullivan’s The Mikado (1885), who holds all of the high offices of state simultaneously and uses them for personal gain.