STREET IMPROVEMENT,—SCHILLINGER ARTIFICIAL STONE SIDEWALKS, ETC.
There is no city on the American continent that has a more unpleasant experience in the construction of her many miles of sidewalks than in Chicago. Flagging, no matter of what thickness, either cracks or splinters, or projects or sinks, or becomes displaced by frost or heat or moisture. Boards decay in a short time, and becomes nests for filthy vermin, while the tar and gravel composition are pronounced the most abominable of all nuisances. Sidewalks which are to be subjected to the ceaseless tread of hurrying multitudes in a great city like ours, and withstand the rough usage occasioned by the handling of heavy merchandise, should clearly be possessed of the essentials of strength, durability and economy. In a series of experiments carefully conducted by the ablest engineers of Europe and America, including among others of acknowledged skill, Major General Q. A. Gilmore, U.S.A., the Schillinger Artificial Stone is amply proven to be the great desideratum, and to substantiate this we have only to refer to some of its special qualities: 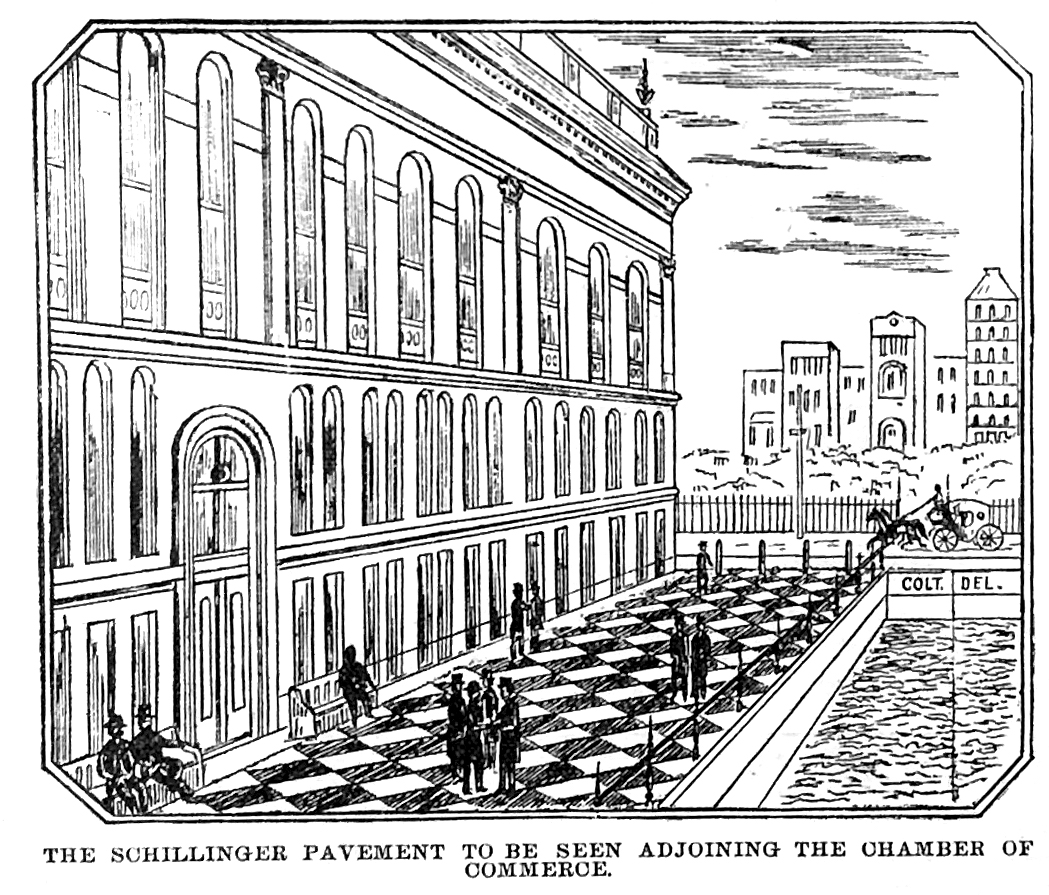 1st. It is composed of Portland cement and gravel in proper proportions, has no vegetable substance in its composition, and is not in the least affected by climatic influences, but will preserve the most minute and sharp lines on its surface for years.

2d. When laid in sidewalks, it is superior to natural stone in the toughness of its texture, thereby preventing cracking and chippomg.

3d. It can be adapted to any surface, however uneven, and can be constructed into blocks of any size, form and color, thus giving a beauty in the way of ornamentation that cannot otherwise be attained.

4th. It has been a success wherever introduced.
5th. Schillinger Artificial Stone is also unequalled as a flooring for cellars, stables, etc., particularly where they are required to be kept dry. For cellar flooring it is perfectly water-tight.

Several thousand feet of it have already been laid in the Gardner House, Sherman House, and Grand Pacific Hotel. We are confident it will stand any test, and that the time is rapidly approaching when no other material will be used, not only for sidewalks and garden walks, but for floorings in railroad depots, breweries, halls, stores, barrooms, cellars, basements, etc. The Schillinger was first put down in New York city in the summer of 1871, and having successfully stood the test of the ensuing winter, has since been laid in large quantities. In the Battery, Madison Square Garden, Mount Morris Square, and other squares and parks, over a million square feet have been laid, and it is now being extensively adopted in front of stores and dwellings on the leading streets and avenues.

It has been successfully introduced in Washington, Baltimore, Pittsburgh, Cleveland, Toledo, Cincinnati, Detroit, Milwaukee, St. Louis, New Orleans and other cities, Wherever introduced in our own city, it has met with the highest praise and commendation. Take for example the specimen laid in September, 1872, on the east side of the Chamber of Commerce, 16 feet wide and 181 feet long, of which we herewith present an illustration. The surface is so even and the colors so perfect, it looks like a pavement of black and white marble tiles, and is believed to be such by the uninitiated, and yet it is a artificial stone made upon the very ground where it lies, and at a cost of only 35 cents a square foot. A considerable amount of this sidewalk was laid in 1871, and has stood the test of two severe winters. For specimens see:
Michigan ave., corner 26th street;
Prairie avenue, near 31st street;
South Park avenue, corner 24th street; and other places.

A much greater amount was laid in 1872, and large contracts have already been made for 1873.

For work done in 1872 see:
Court on the east side of the Chamber of Commerce;
Michigan avenue, north of Eighteenth street;
Indiana avenue, around and in front of the M. E. Trinity Church. near 24th street. 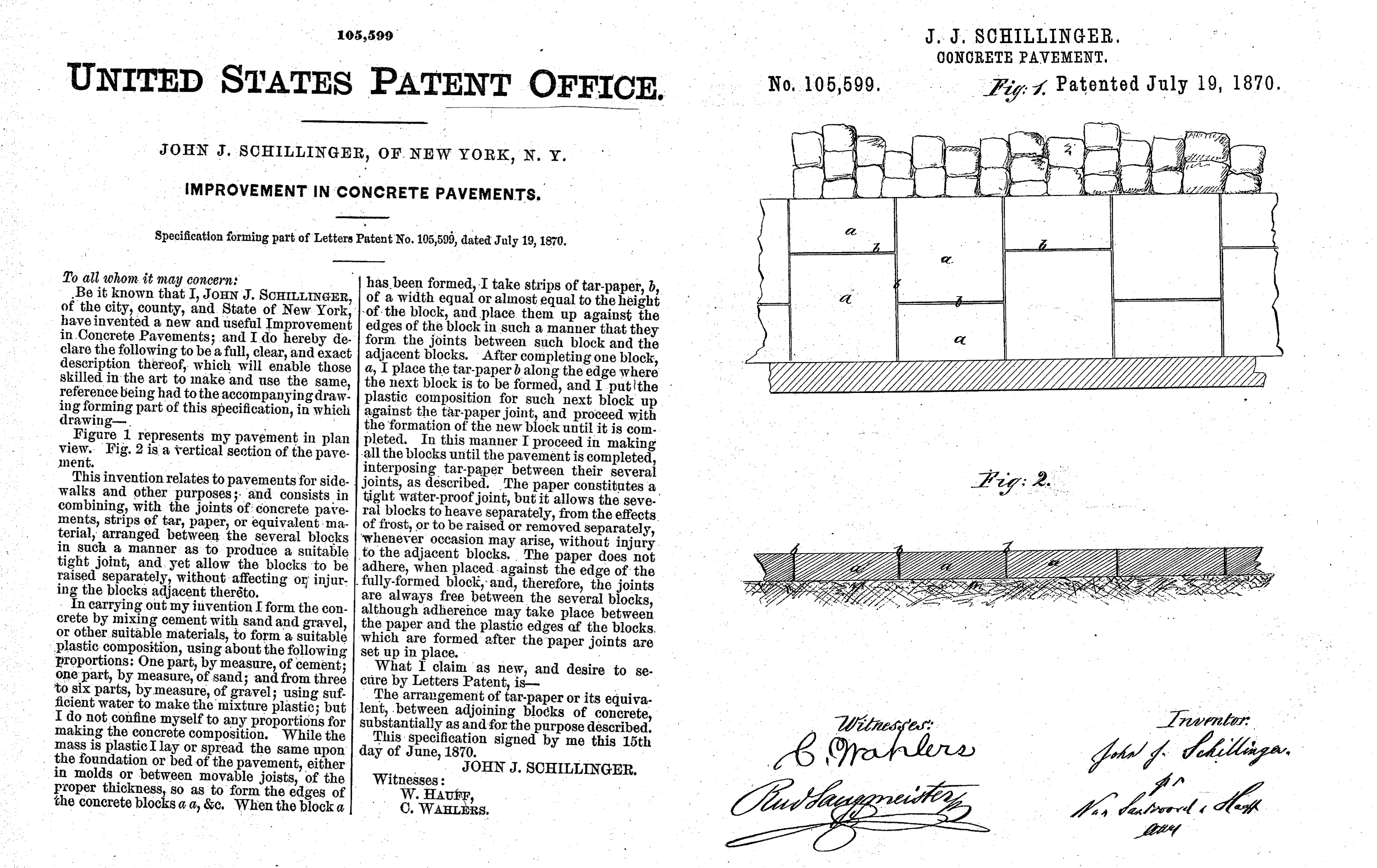 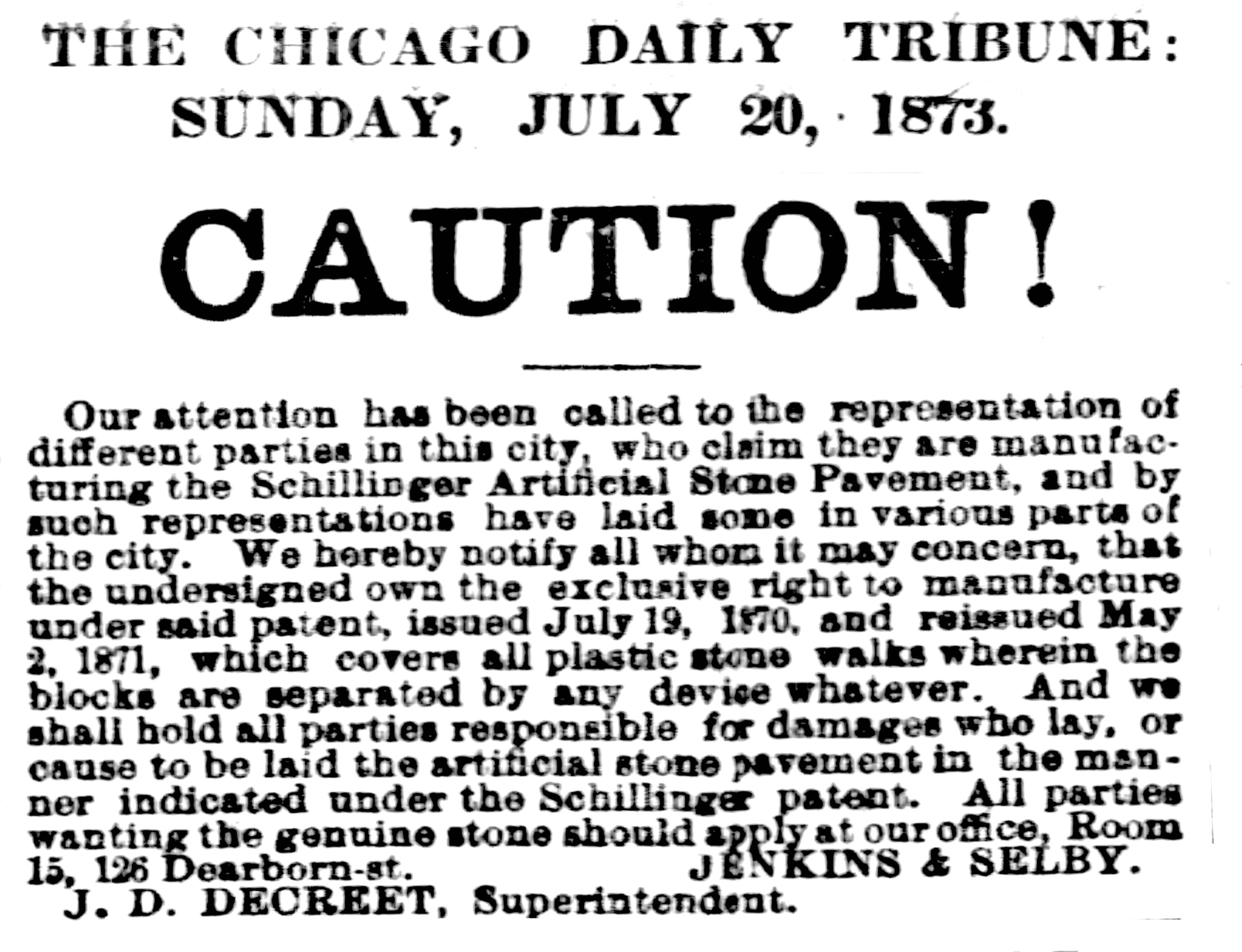 Large contracts have been made with several churches, and the work already in progress far exceeds the whole amount previously laid in the city. There has been no “flourish of trumpets” about this sidewalk, but the work has been quietly and well done, and left to “speak for itself.” The citizens of Chicago know when to adopt good thing. The success of this company is established, and more work will be done in this city and suburbs than in any other city of the Union, not excepting New York.

The office of the building is at 126 Dearborn street (Cobb’s Building), room 15. Its business manager is Mr. J. D. Decreet.

Schillinger Pavement has had new installations as late as 1920 in Montgomery, Alabama. However, it appears that the original company had failed to prevent unauthorized use of the artificial material in several markets, including Chicago, and eventually lost its popularity and exclusiveness.