THE GARDNER HOUSE
F. B. Gardner, Esq., a Chicago capitalist is erecting an elegant hostelry, at the corner of Michigan avenue and Jackson streets, fronting on Lake Michigan, which our artist has sketched in a full page. This edifice is also from plans drawn by Mr. Boyington.

It has a front of 120 feet on Michigan avenue by 170 feet on Jackson street, which is about the size of the original Sherman House. The material of the structure is brick, the two fronts to be elaborately ornamented with terra cotta, of new and elegant designs, devised especially for the building. The design of architecture will be Italian, and the building is to be surmounted by a handsome Mansard roof. The height is to be five stories above the basement. There will be two wide entrances of about the same width from the avenue, and from Jackson street. The basement will contain the working rooms of the hotel, laundry, drying-room, servants’ dining-room, etc.

On the first floor will be the office of the hotel, stores, and business offices. The office of the hotel will be 40×70 in size, the roof being supported by Corinthian columns, with cornice and entablature, and highly ornamented. There will also be upon the same floor a billiard room on Jackson street, a barber shop, a lunch room, and a bar room. The ladies’ entrance to the hotel is from Jackson street. On the second floor are the dining room and the ladies’ ordinary, the dining room fronting on Jackson street, the ordinary in the alley. The first is 50×60, the others 27×39. The ladies’ parlor, being at the corner of Michigan avenue and Jackson street, commands a fine view of the lake. There will be about 200 sleeping rooms, all of them of ample size and completely furnished. The kitchen, carving rooms, etc., are on the second floor, convenient to the dining rooms. The halls will be wide and long, extending through the entire building and lighted at the ends. 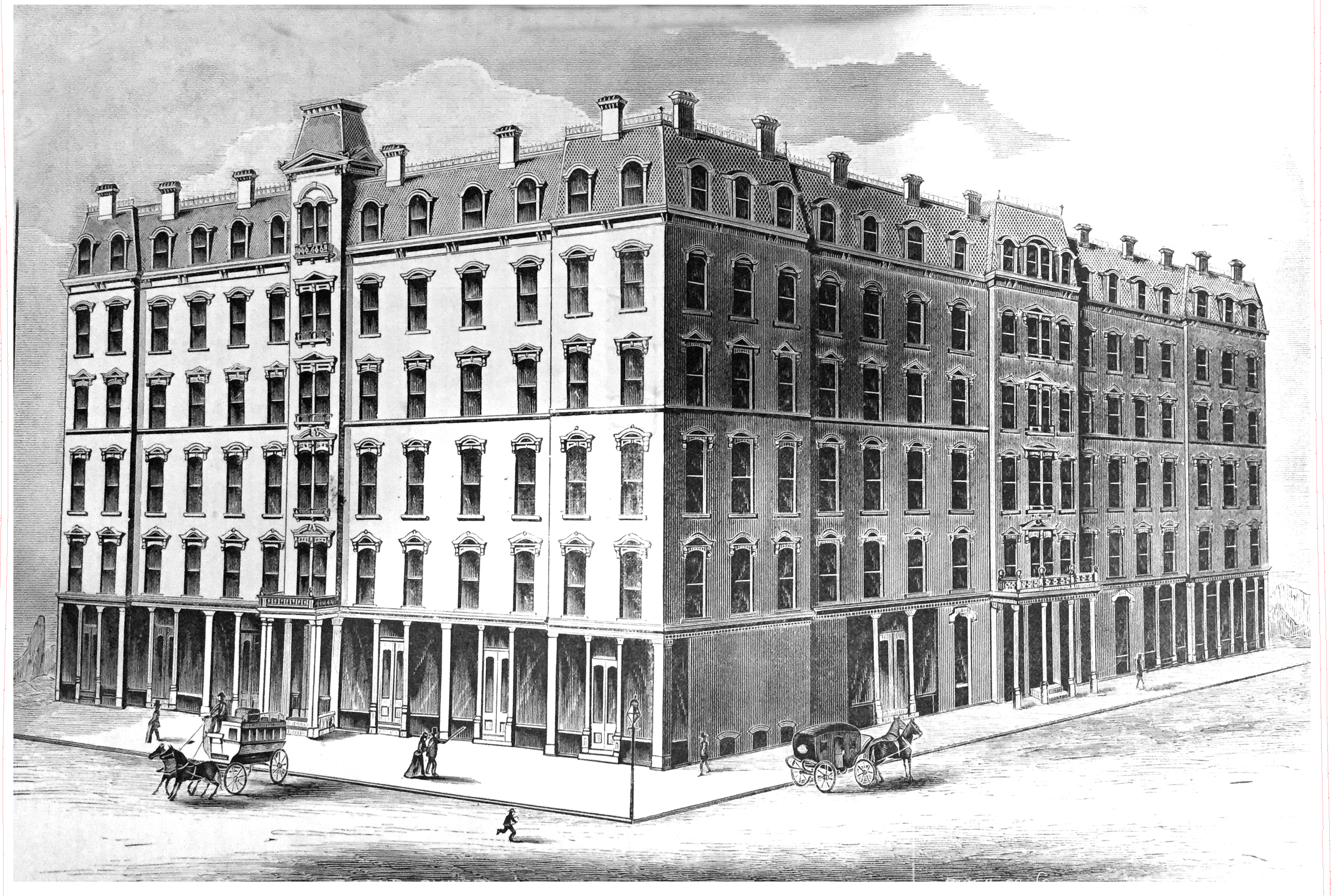 REBUILT CHICAGO—THE GARDNER HOUSE, NOW IN PROCESS OF ERECTION AT THE CORNER OF MICHIGAN AVENUE AND JACKSON STREET.

Peck Carpets.
The Gardner House, corner of Michigan avenue and Jackson streets, is about to be opened to the public. The carpets which are now being laid are furnished by Spencer H. Peck, of No. 19 South Canal street, and are rich and beautiful. The hotel is furnished throughout by this business house, and that, too, in a manner reflecting great credit upon Mr. Peck.

The Land Owner, Two Years After the Fire 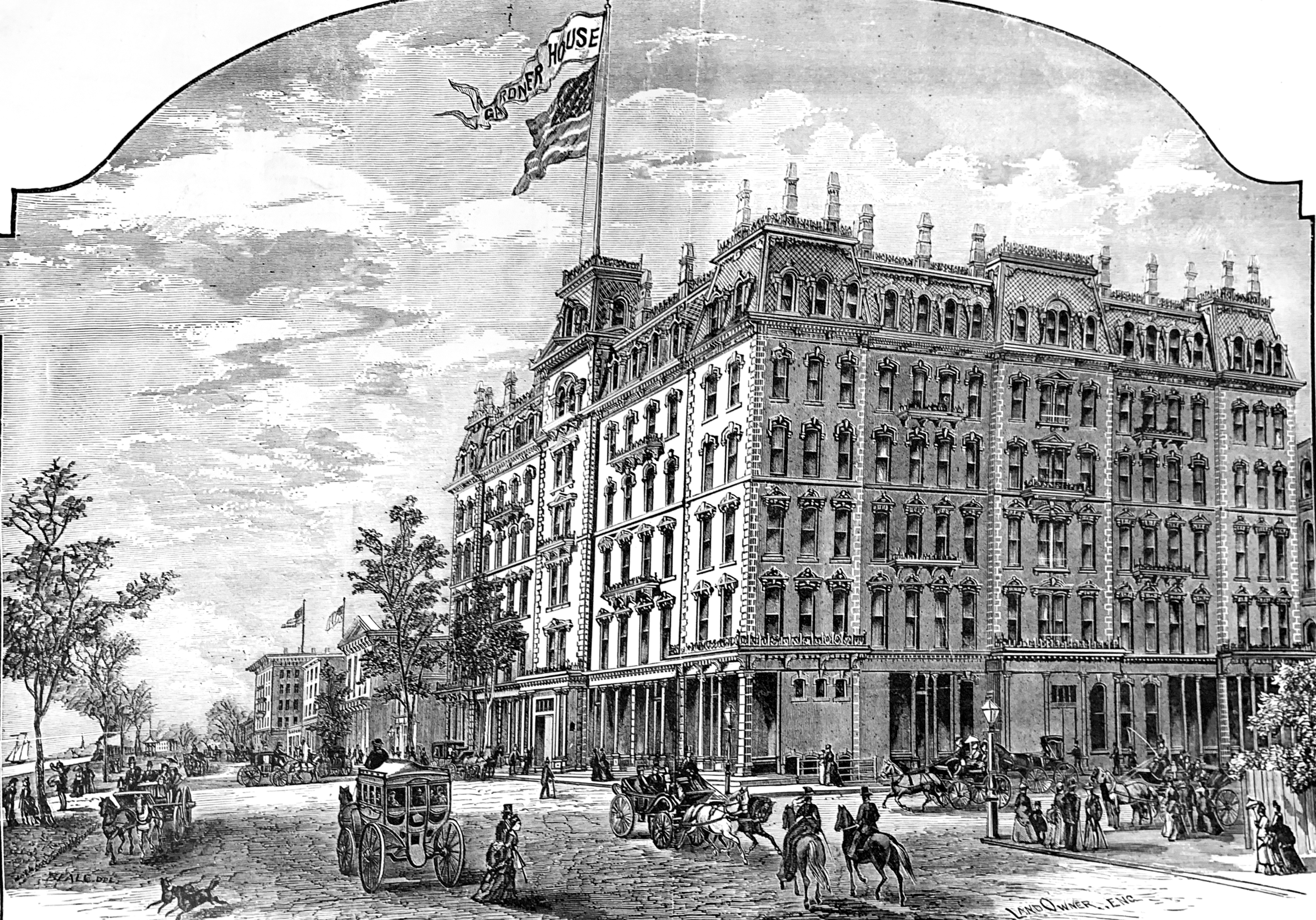 REBUILT CHICAGO—THE GARDNER HOUSE, AT THE CORNER OF MICHIGAN AVENUE AND JACKSON STREET. 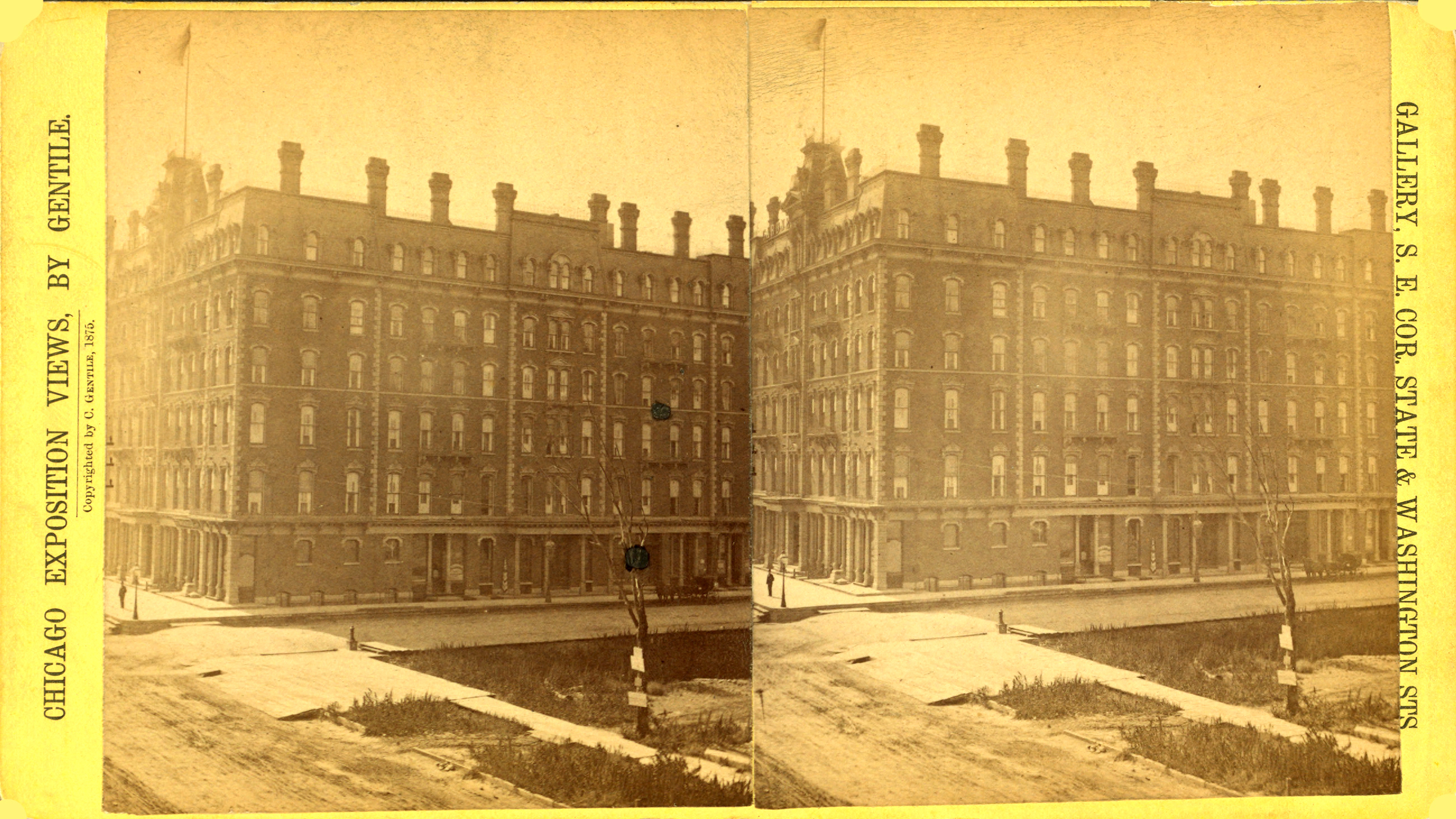 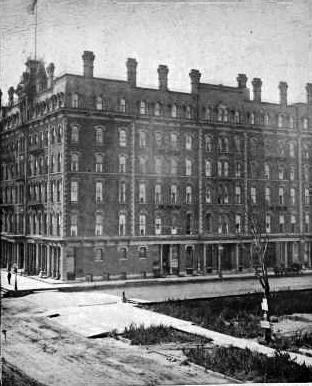 THE LELAND HOTEL.
The Leland Hotel is the new name which the new proprietor, Mr. Warren F. Leland, has given to the “Gardner House,” located on Michigan avenue and Jackson street. The situation is far the finest in the Garden City in every point of view. The house is completely insulated, and the pure air from the lake has a free circulation on all sides, and, moreover, there is no offense from mewer gas, which all escapes by a ventilating pipe. These are all-important features in a sanitary view. The situation is central with the numerous railway depots, and the view of the lake unobstructed, and the attraction of the steamers and vessels constantly passing for nine months in the year, is really charming. Mr. Leland has cast is lot in Chicago as his future home, and has undoubtably made a judicious choice. The house is undergoing extensive alterations, involving an outlay of fifty thousand dollars, five thousand dollars being expended on the dining-room alone. The frescoing of the ceiling, the work of our great artist Alminmi, now well under way, is magnificent—there is nothing in the city equal to it. Mr. Leland belongs to a family of hotel-keepers of four generations, and his connection with the Delevan House of Albany, for the past fourteen years, has gained for him an enviable popularity. The following is taken from a long article in the Albany Evening Journal:

While Albany will regret her loss, Chicago is to be congratulated upon her accession of so thorough a hotel man. The Leland hotels dot the country in every direction, and this will add one more to the already large number.

We augur for Mr. Leland a successful career in his Western venture. 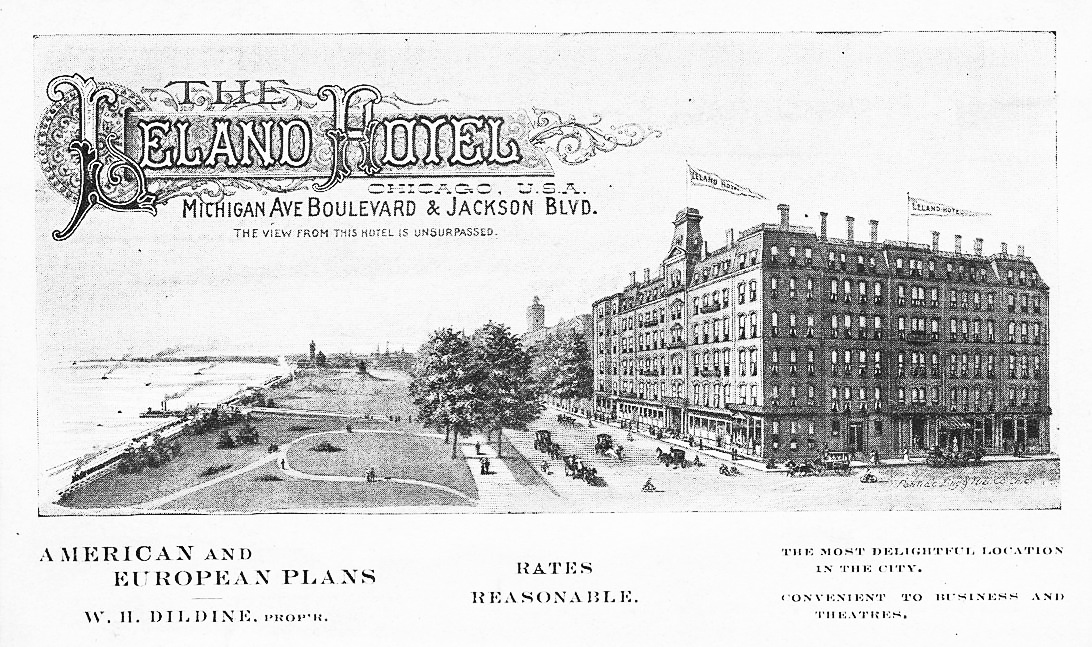 The Standard Guide to Chicago For the Year 1891, Flinn & Sheppard

Leland Hotel
Located on the corner of Michigan blvd. and Jackson St., Lake front, facing the site of a portion of the World’s Columbian Exposition. For many years this was known as the Gardner House, but not until its name and management were changed did it come to be reckoned among the great hotels of the city. Its location is charming, on one of the finest boulevards in the city, overlooking the majestic Lake Michigan and yet being within easy access of the entire business section, the railroad depots, street car terminals, retail stores, theatres, etc. Numerous improvements have been made both in the interior and exterior of the building from year to year, and they are still going on. An immense addition to the structure is among the latest of these. The sanitary condition of the hotel has received the serious attention of the proprietor. The latest and best methods to insure the escape of all gases and offensive odors have been adopted, and the sewerage has been pronounced perfect. Recent alterations have made the house more beautiful than ever. The renovating and painting have been accomplished by experienced and competent artisans ; and the frescoing of all the halls, parlors and public rooms has been by the hand or under the eye of the famous Almini. The cuisine department has been supplied with new and improved ranges and all the latest and best utensils to insure wholesome and savory food of every kind. The dining room of the Leland is a large, well lighted, handsome, airy room, finished in the latest style. In the hallway leading to the dining room, between the hours of half past five and eight o’clock, an orchestra of six pieces is stationed to render music during dinner time. This is a feature that no other hotel in Chicago has for the enjoyment of its guests. The advantages are,at once perceived of a sojourn at a hotel past which all the finest turnouts of a great city quietly but rapidly drive. 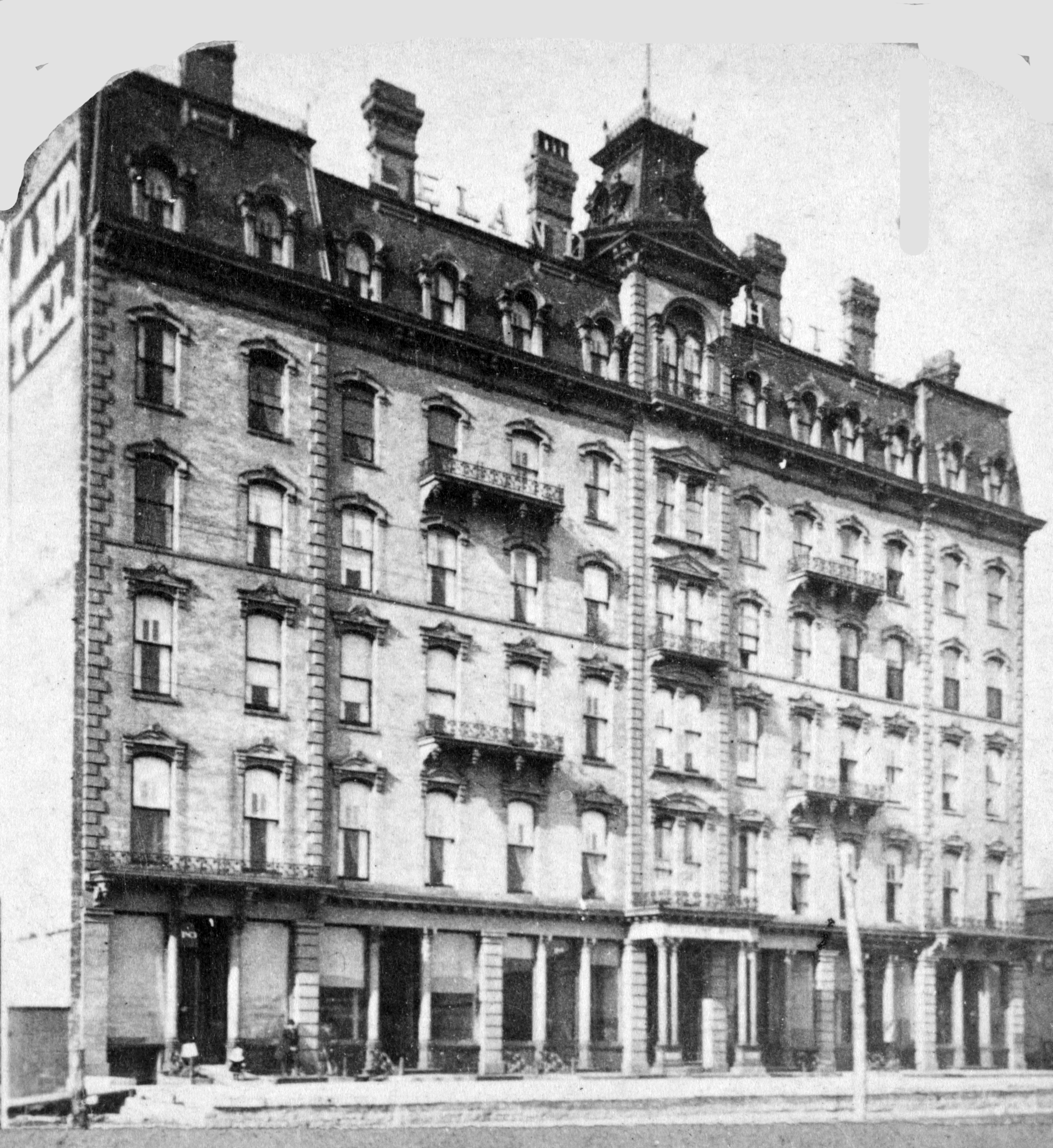 From the front of the Leland its inmates may, without the slightest inconvenience or undue curiosity, scan during every fine day the beauty and dress of the elite of Chicago, as well as their attractive carriages and equipages. No watering places on the continent offer so fine a point to study the exterior characteristics of the distinguished leading citizens of a population of much more than a million, as do the balconies and windows of the Leland Hotel. No noisy procession, street cars, market wagon or peddler is allowed on this boulevard. During the greater part of every fine day, beautiful carriages are moving continuously, but when the hours of rest approach, the avenue becomes quiet, and so remains until the. seekers of health, pleasure and recreation turn out in their carriages on the morrow. The Leland has superior accommodations for families and gentlemen, with a table of peculiar excellence. Warren Leland, proprietor. 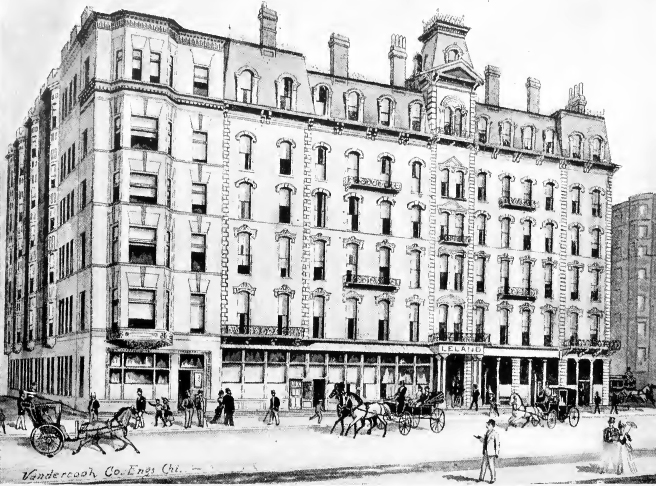 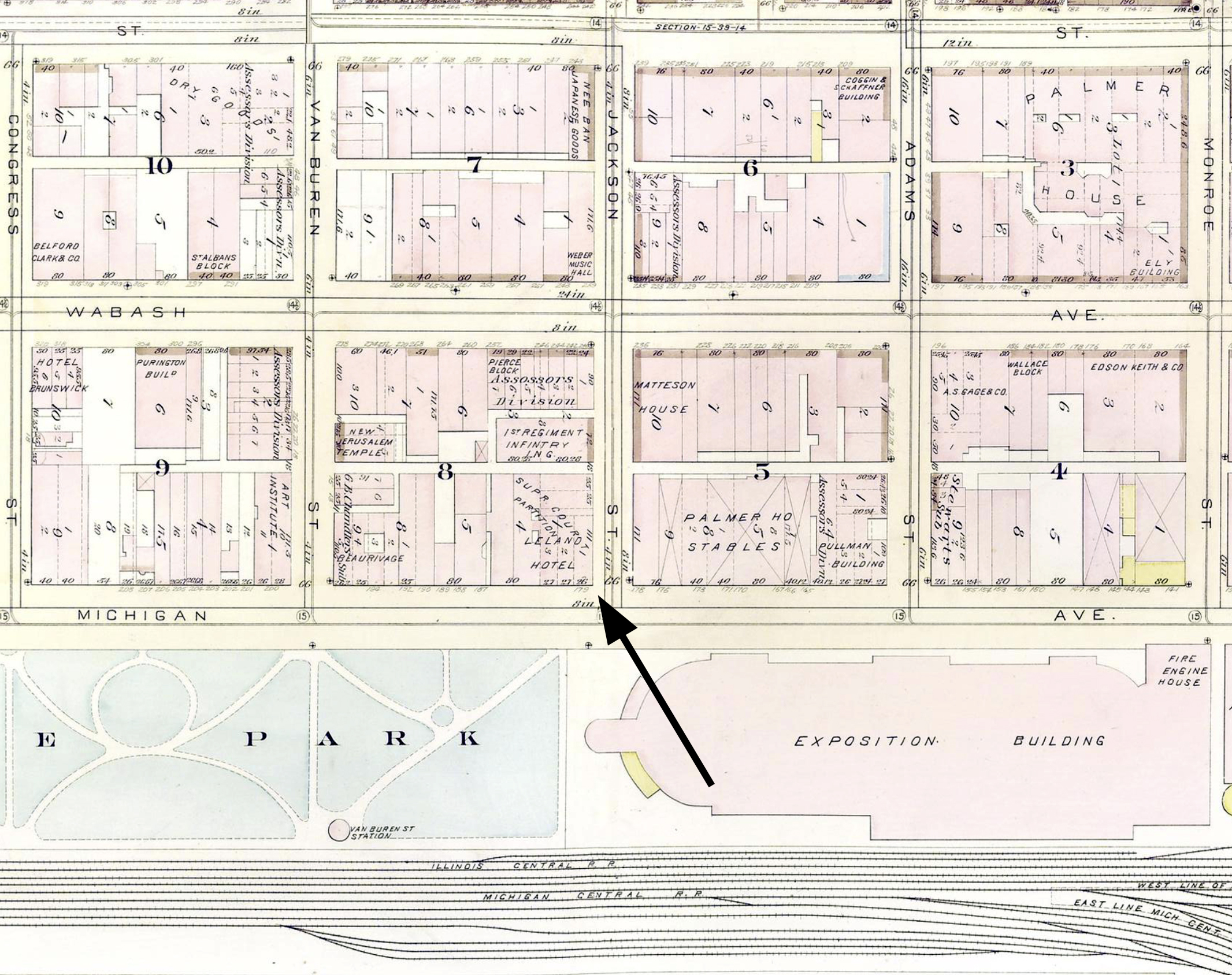 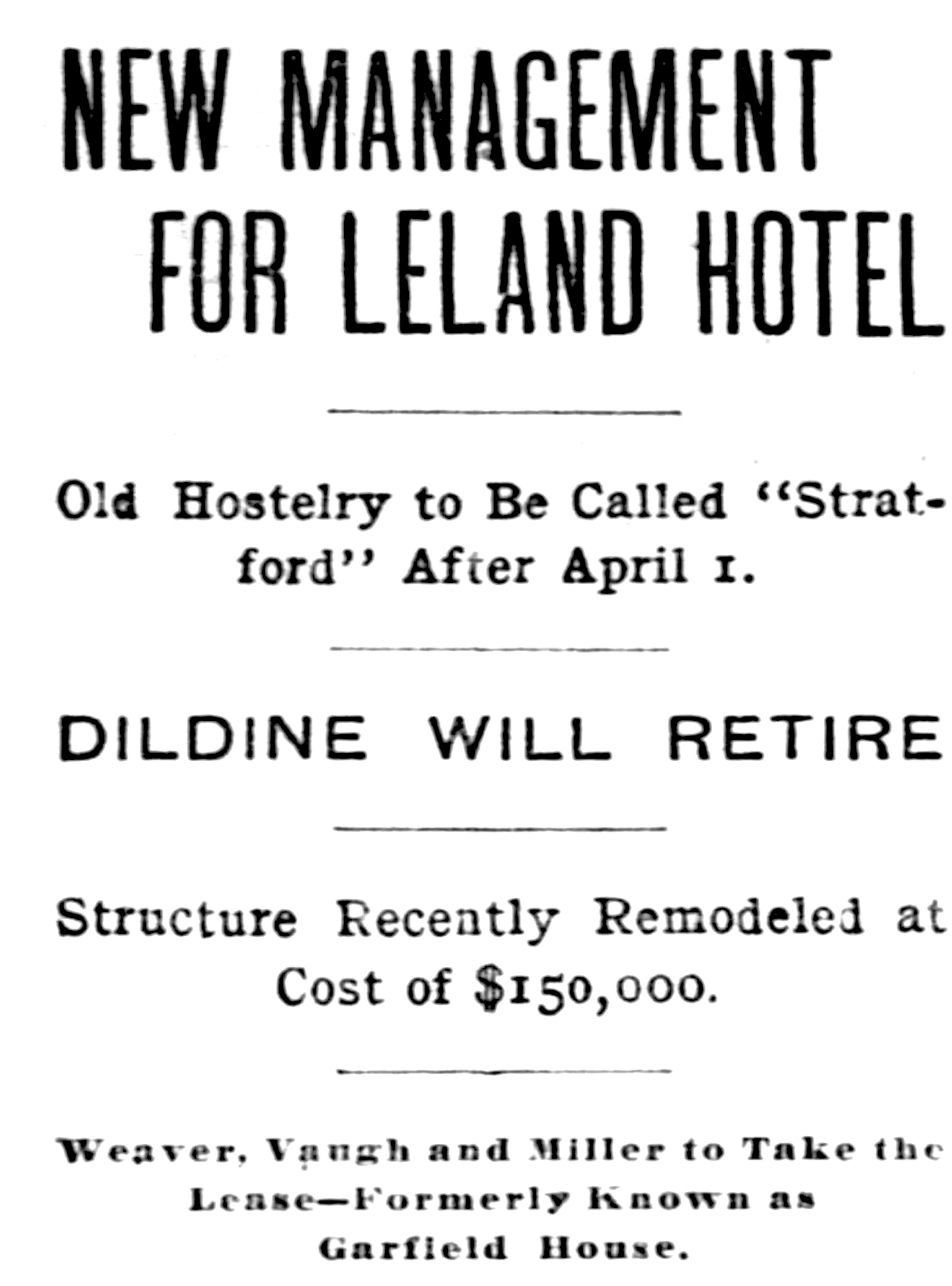 The first of next April will witness the passing of the old Leland hotel, Michigan and Jackson boulevard. The building will still remain a hotel, but the name, management, and appearance will be changed. A new company, called the Stratford Hotel company, composed of George B. Weaver, at present manager of Kinsley’s Restaurant and Catering company; Frank E. Vaugh, and H.G. Miller, has been formed to take the lease of the hotel, and on April 1 the present manager, W.H. Dildine, will retire. The new name will be the “Stratford.”

The hotel today is new in appearance. The entire first floor has been remodeled and refurnished. The plumbing is new. The improvements will not be entirely completed until April 1, when the new managers will assume control/

The Leland is the oldest first-class hotel in the city, being the first to be opened after the great fire of 1871. It was known as the Gardner house then, and was managed by Gardner & Gould. For a year it did a big business at high prices, but the opening of the Palmer, Grand Pacific, Sherman, and Tremont deprived it of its monopoly of the best transient custom, and later it became known chiefly as a family hotel.

The property finally passed into the hands of Captain A.E. Goodrich, who conducted it through various lessees and managers, including A.D. Harlow, C.H. Gaubert, B.F. Starr, Jewett Wilcox, and Richard Somers. Twenty years ago the Gardner house was purchased by J.T. Cobb of Cleveland, who immediately took into partnership his son-in-law, the late Warren F. Leland. Mr. Leland at that time was one of the proprietors of the Delevan house in Albany, N.Y. He came to Chicago in 1882, and, taking possession of the Gardner house, made extensive additions to and changed its name to the “Leland.” In March, 1892, Mr. Leland sold the house to a New York syndicate for $1,000,000. During his proprietorship here he began a suit against the Illinois Central and Michigan Central railroads to preserve the lake front against their encroachments. In this fight he was successful, and aided largely in keeping the park along that part of the avenue intact for the benefit of the city at large. Mr. Leland, on leaving this hotel, designed and built the Chicago Beach hotel, which he conducted during the World’s Fair. In four months and a half he cleared $244,000, eclipsing all hotel records for rapid and enormous profits. Mr. Leland died on April 5, 1899, in New York, two weeks after the Windsor hotel fire, in which his wife and daughter were burned to death. Mr. Leland was the proprietor of the Windsor, and it is thought that his death was the direct result of the shock caused by the terrible loss of life at that time.

Since 1882 the Leland hotel has had several managers, including L.A. Kittredge, A.L. Skeels, C.F. Milligan, C.W. Dabb, and W.H. Dildine. 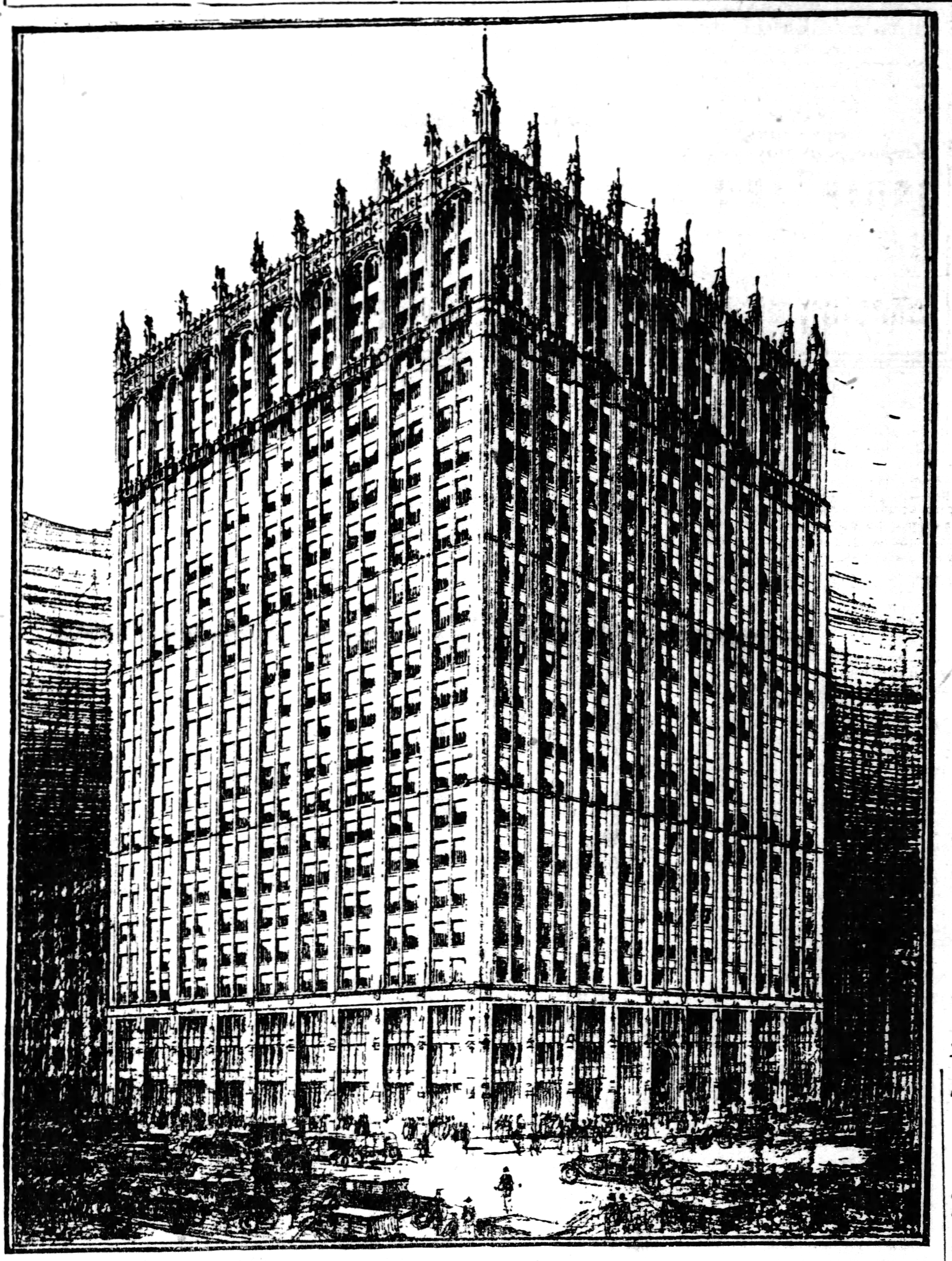 Marshall & Fox have designed the new $6,000,000 Stratford office building to be erected on the site of the famous old Stratford hotel on the siuthwest corner of Michigan and Jackson. It is the intention of Levt Mayer and Edwin Meyer, owners, to make it the finest structure of its kind in the world. The modern Gothic type of architecture will be carried out in the interior as well as in the outside walls. All the corridors, for instance, will be of white marble, with groined ceilings. The first floor lobby will be of Carrara marble inlaid with blue mosaic, no plaster being used. There will be “returns” on the alley and the blind wall on the south, but the decorations on the three upper floors will be carried all the way round the building. There’ll be entrances on both Jackson and Michigan. Martin C. Schwab is in charge of the mechanical engineering.

Final signatures were affixed last night to a contract for the sale of the southwest corner of Michigan and Jackson boulevards by the Levy Mayer estate and Edwin F. Meyer, for approximately $4,50,000, to S. W. Straus & Co., Chicago and New York bankers.

On this site, instead of the twenty-one story Stratford office building planned by the late Levy Mayer to supplant the old Stratford hotel, recently wrecked (May 1), Straus & Co. intend to erect an $8,000,000 office building, which may climb to 500, or possible 600 feet, if the proposed setback building height ordinance is passed. 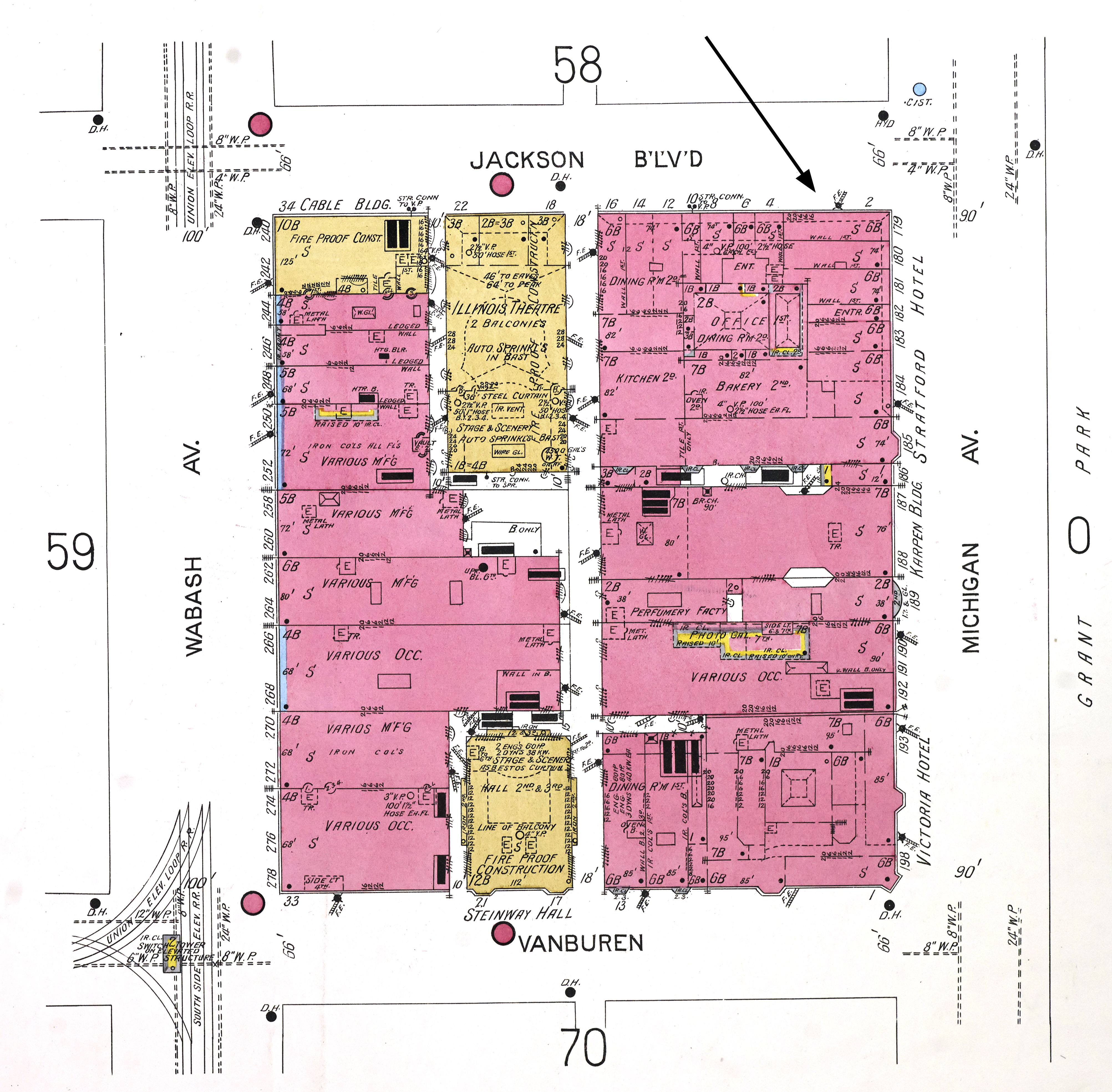