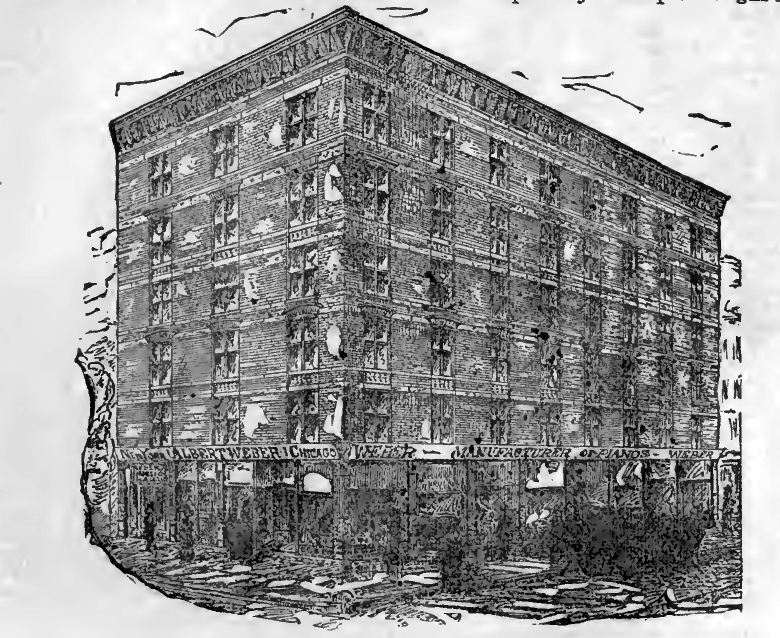 Fronts 100 feet on Jackson Street and 50 feet on Wabash Avenue. extending west to the alley, on the southwest corner of E. Jackson street, was six stories and one basement high, on spread foundations. It is 65 feet high, with 6 stories and basement, and contains a recital hall of high standing among musicians, who nearly fill the 35 offices of the building. Here are 2 stores, and here are the headquarters in Chicago of the Domestic Sewing Machine Company. The structure, a fine one, was erected in 1878.

Weber Music Hall has become one of the established constituents of our growing musical system in Chicago, and it is within the limits of probability to say that in no other audience-room in the city is so much music heard in the season, and perhaps so good music of that kind which is best understood by the phrase, “chamber music.” The house of Weber long known for the superb quality of the pianos it produces has always found its interests closely identified with the cause of music, and if Weber Music Hall serves a business end as well, it will not detract from the sagacity of the management, that they have been able to find their interest in ministering to the needs of musical art. Certainly nothiner has ever been provided in Chicago that is so near to the wants of professional musicians and has so powerfully forwarded the cause of musical education in our midst, as may be instanced by the uses to which it has been put. On every Monday evening the Mozart Society are wont to hold their rehearsal within these walls, sacred to divine melody, and on certain afternoons the ladies of the St. Cecilia Society, under the direction of Mr. Tomlins, of festival fame, lift their less strident and equally tuneful voices in preparation for more”formal occasions, while regular events of the musical season here are the concerts and reunions of the pupils of Mr. Liebhng. Mr. Ledochowski, Mme. Rice, Mrs. Cole, Mr. Pratt, Miss Fay, Mr. Mathews’ et omnes. The building itself, which is shown on this page, is a sightly structure of quiet but impressive style, ana elegantly and suitably furnished and decorated throughout, both in the warerooms and hall, where the superlative merits of the Weber pianos are shown before audiences whose critical acumen is a crucial test from which instruments of less noble quality might well shrink. In the warerooms may be seen samples of the work of the house in all styles of grand, upright, and square pianofortes, elegant in design and superb in case-work and the interior musical merits. The house makes a specialty of unique designs in cases made to order and suited to the particular nook they are to occupy in the home of the purchaser, having a number of such under way for wealthy residents who are able to appreciate the outline of beauty as well as the limpid purity of tone characteristic of the Weber pianos. 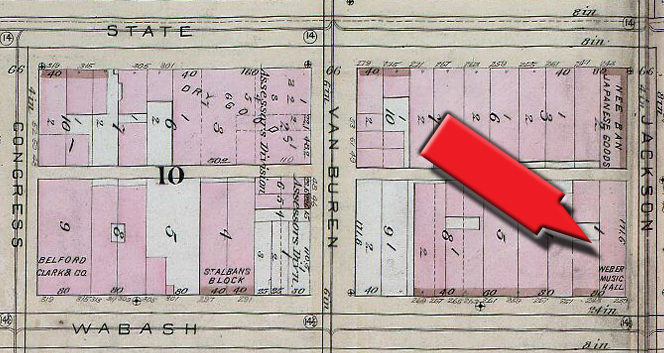