GARDEN CITY PHOTOGRAPH GALLERY.—The old well known Photograph Art Gallery, at 131 Lake street, adjoining the Exchange Bank, has recently been purchased by, Mr. J. Carbutt, who has made important alterations; and re-arranged the whole establishment, especially in the Operating Room, having improved the light, which is the largest in the City, and added suitable accessories, which, judiciously combined, make you feel while sitting for a portrait, as if cozily ensconced in your own easy chair at home; giving to the picture that placid and natural expression so much to be desired and for which his pictures are so justly celebrated. Mr. C. is a practical photographer and understands well the chemistry of his art, which enables him to produce work of the highest merit and durability. He intends making our City his future home, and comes recommended by the best photograph chemists and artists of Cincinnati New York. Citizens and strangers will do well to call at the Garden City Gallery, 131 Lake streeet, when in want of portraits of themselves or friends. 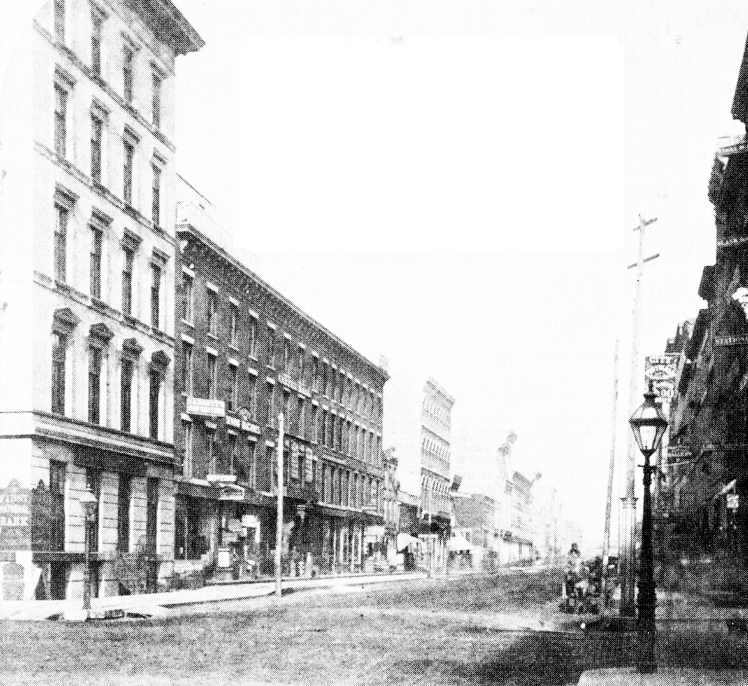 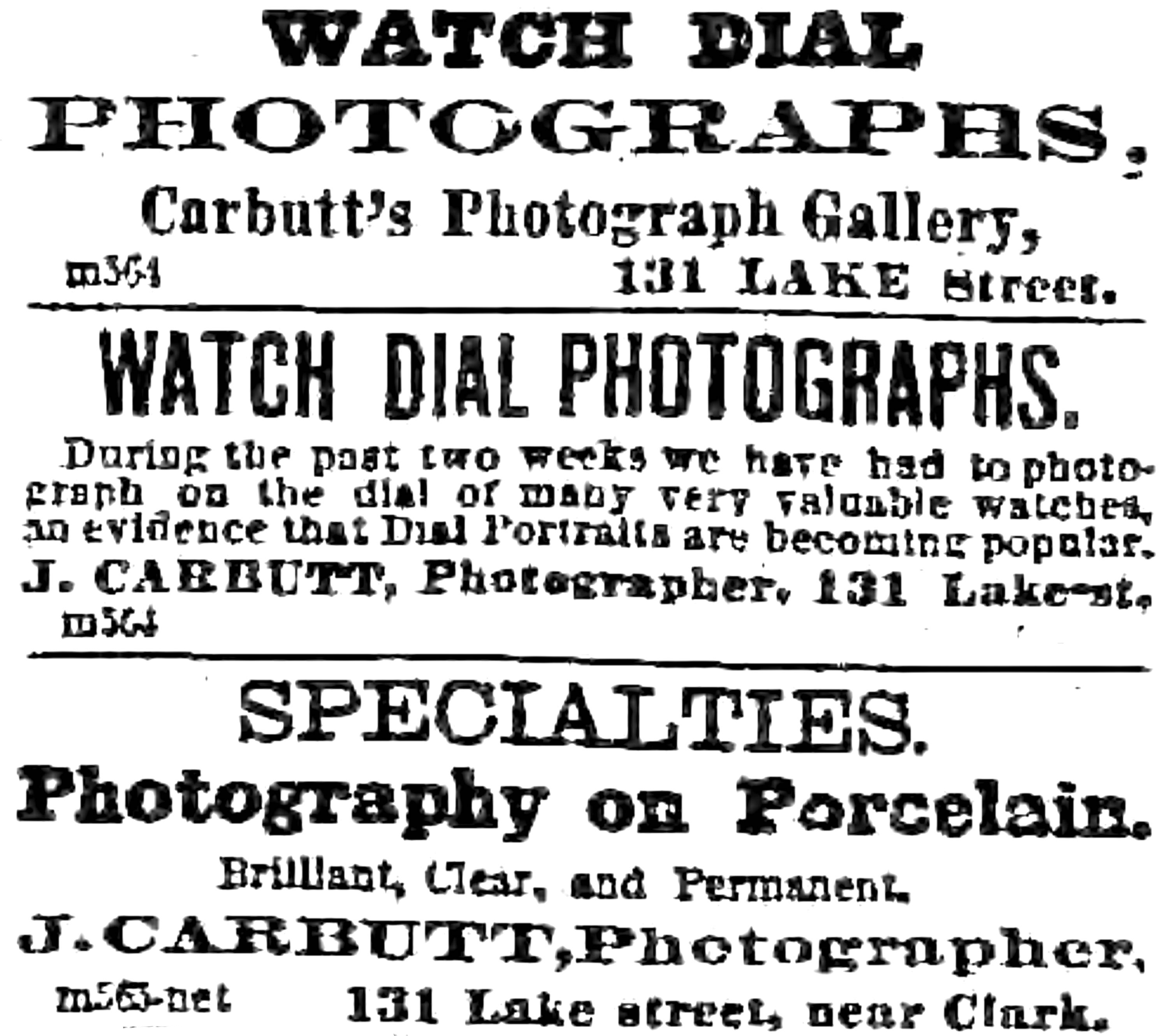 PHOTO-MINIATURES.—Mr. J. Carbutt, the well-known photographer of 131 Lake street, has recently introduced into this city a new style of portrait on porcelain (common use was watch dials), called the “Photo Miniature,” which is destined to become very popular. The pictures produced by this new process are among the finest made by the agency of light and chemicals, guided by a thorough knowledge of the art. Mr. Carbutt has devoted a great deal of time and money to bringing this new discovery into practical use, and he now feels confident that he can produce them in a manner not alone durable, but at prices that will place them within reach of all.

Views at Home and Abroad.—Art has achieved few greater triumphs than in the discovery and perfection of Photographs—the process which draws down the rays of the sun—and makes them paint with unfailing accuracy varied scenes of nature and life, so that one can sit in his own room, and, by means of the stereoscope, visit all nations and climes. One of the most successful disciples of this art is the well-known Chicago artist, Mr. J. Carbutt, whose rooms at No. 131 Lake street, contain a multitude of proofs of his skill, gathered from far and wide. No better proof is given of the important position which photography holds in the supply of our social and commercial wants, than in the illustrating biographies and works of art with photographs. Mr. Carbutt has now near completion the largest order of portraits we have ever heard of. It numbers no less than between forty-five and fifty thousand of the new cabinet-size of portraits of between eighty and ninety of our most prominent citizens, and which are to illustrate a work shortly to be published in Chicago, and this is being done without in the least interfering with his regular portrait business, so great are the resources of his establishment.

He has made out-door views somewhat of a specialty, and has a splendid collection of views of Chicago, its streets, river, bridges, churches, and other public buildings, and of numerous places of interest on the West and Northwest, including the great rivers, the plains and the Rocky Mountains. He accompanied several excursions to Lake Superior, and over the Union Pacific Railroad.

Mr. Carbutt’s last trip was with the editorial excursion to the Rocky Mountains, and he has some thirty fine views, taken with the party and in a more extended journey among the mountains. Those who have never seen the plains or mountains of the Great West, can obtain a vivid idea of their wonder from these finely taken views. When seated in our easy chair and enjoying the wonders and beauties of nature which the stereoscope in particular reveals to us, we are not apt to consider the yoil and expense the artist has to undergo in procuring them, and we are pleased to be able to state that the encouragement Mr. Carbutt meets with in the sale of his views is very flattering. Mr. Carbutt has obtained a {copy missing.} 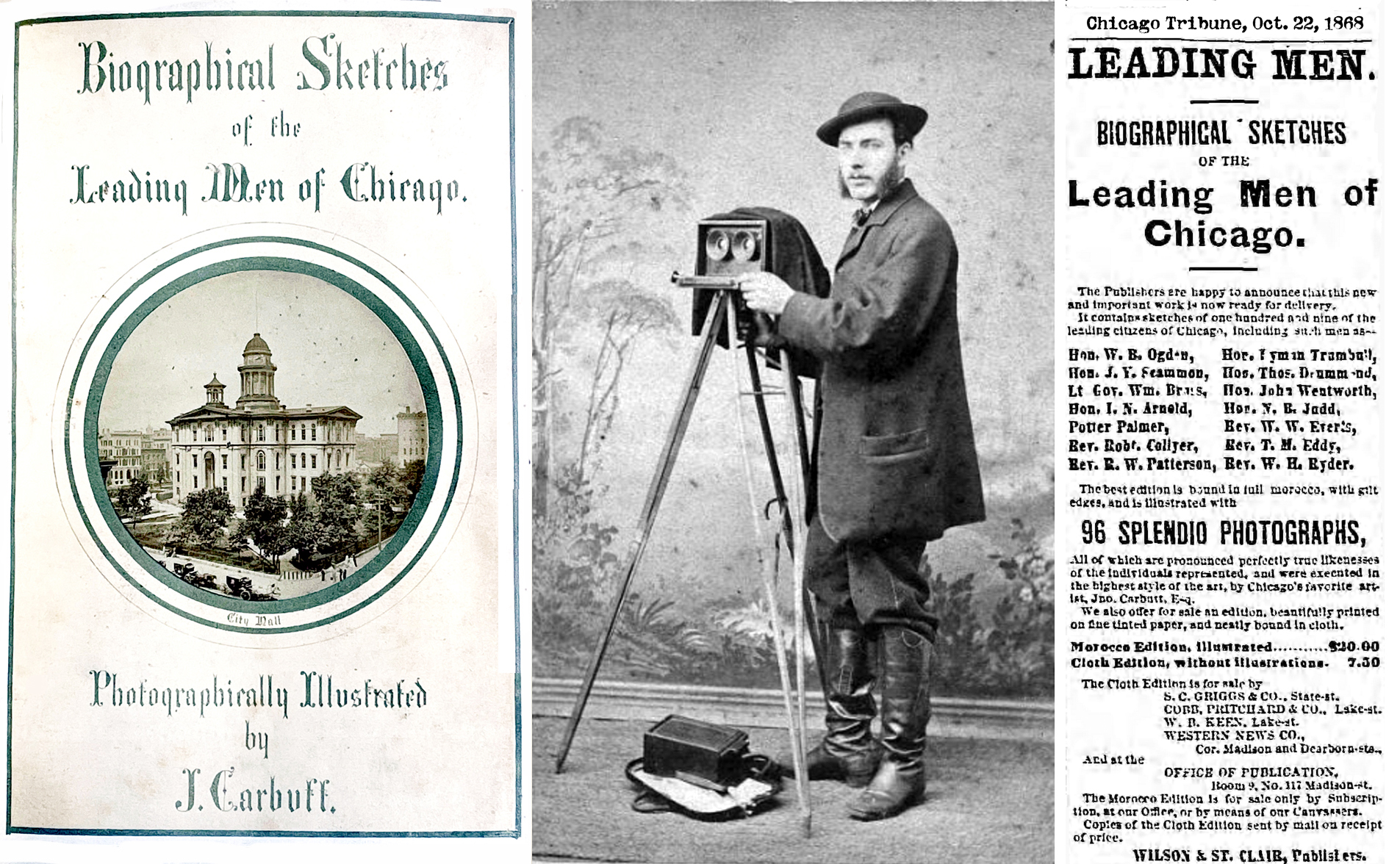 The frontispiece and advertisement of John Carbutt’s Biographical Sketches of the Leading Men in Chicago., published in 1868.

Artistic Photography.—Photography is not per se a high art; but it is a process which subsidizes high art, and when, in rare instances this occurs, it is clearly the duty of the art critic to give it attention as to do justice to the realistic in painting or sculpture. It is the consideration which leads to include in our art notices favorable mention of Mr. Carbutt’s Photographic Studio on Washington street. Mr. Carbutt’s perfect knowledge of his profession, has unfailing good taste, and his sagacity and enterprise in perfecting its process and availing himself of the most recent improvements, are too well known to need more than favorable mention here. One is struck in his new studio with the skill and taste shown in every arrangement looking to artistic perfection. It is especially satisfactory to observe that Mr. Carbutt does not fear to place before his patrons the most exacting models which photography has produced in London and Paris, as is instanced in the superb heads—an old man and a young lady—from the two leading establishments of Paris; and the studios from life, by Valentine Blanchard; printed by “Swan’s Carbon Process.”—Chicago Art Journal. 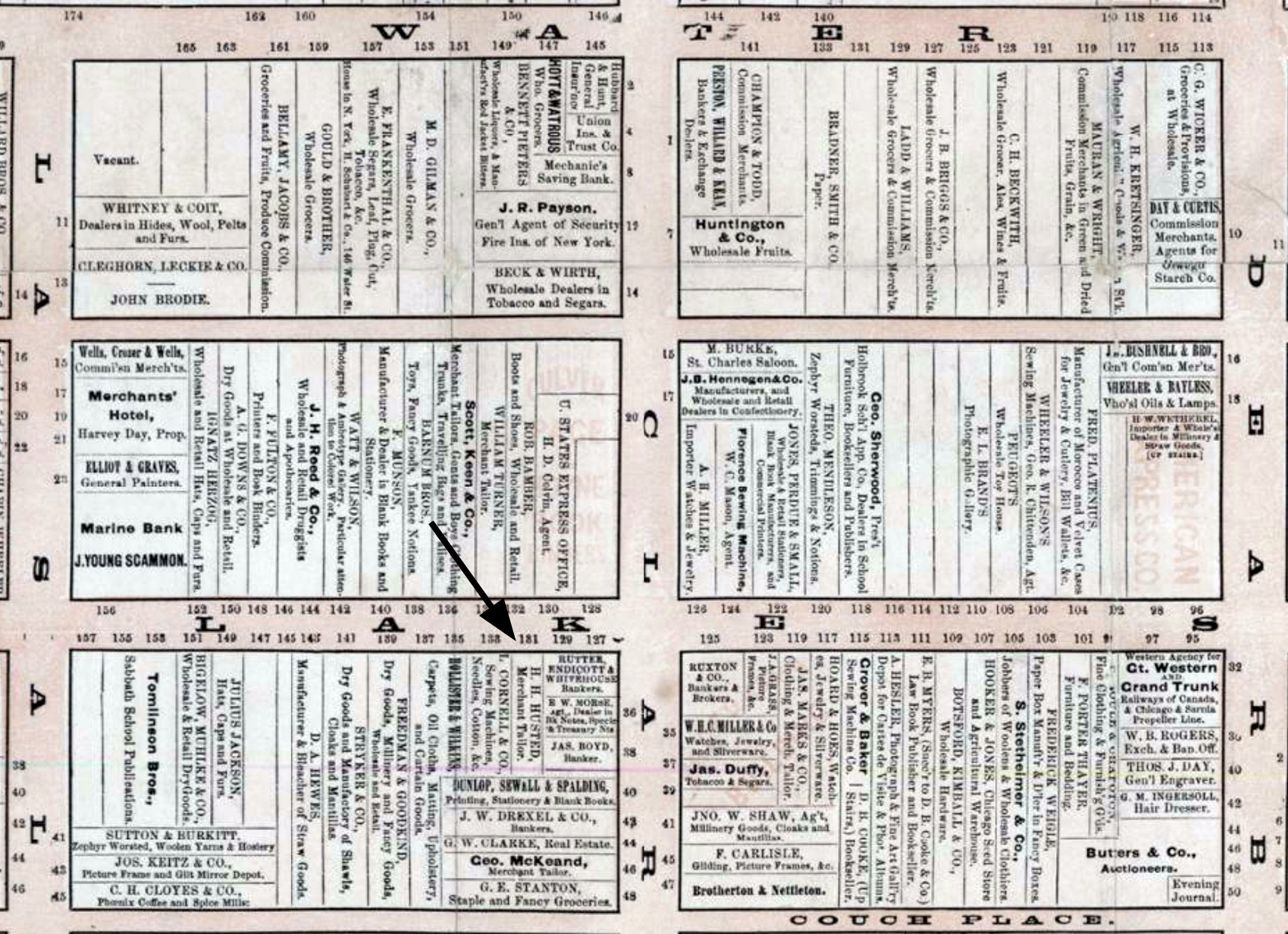 Our Chicago Letter.
Changes for the better are frequent in Chicago, making the growth of the city and the energy of men foremost in the various departments of business. Mr. John Carbutt, of photographic fame, is a marked instance of this. His old quarters on Lake street were not only as containing, all that was best in the art, but the indefatigable proprietor had there collected views of rare Western scenery, from Minnesota lakes and waterfalls to Rocky Mountains landscapes. Properly appreciating the demands consequent on his skill and reputation, Mr. Carbutt, has resently opened the finest gallery in the West, if not in the country. Situated at No. 24 Washington street, corner of Wabash avenue, his location is preferable to the former one, both in reference to the leading lines of communication to and through the city, and seclusion from noisy uproar. The parlors and everything about the place surpass in conception and finish anything of the kind ever known here, and the usual tedious stair climbing is avoided, as the reception parlor toilet room and studs are on the first floor floor. To praise work executed by Mr. C. is superfluous, as he is not only known in Chicago but through the West as one whose efforts have benefitted himself and added to the acquirements of the profession. His orders for costly pictures extend hundreds of miles on all sides, and whenever this class of work is sought in Chicago the best establishment is the most desirable place. 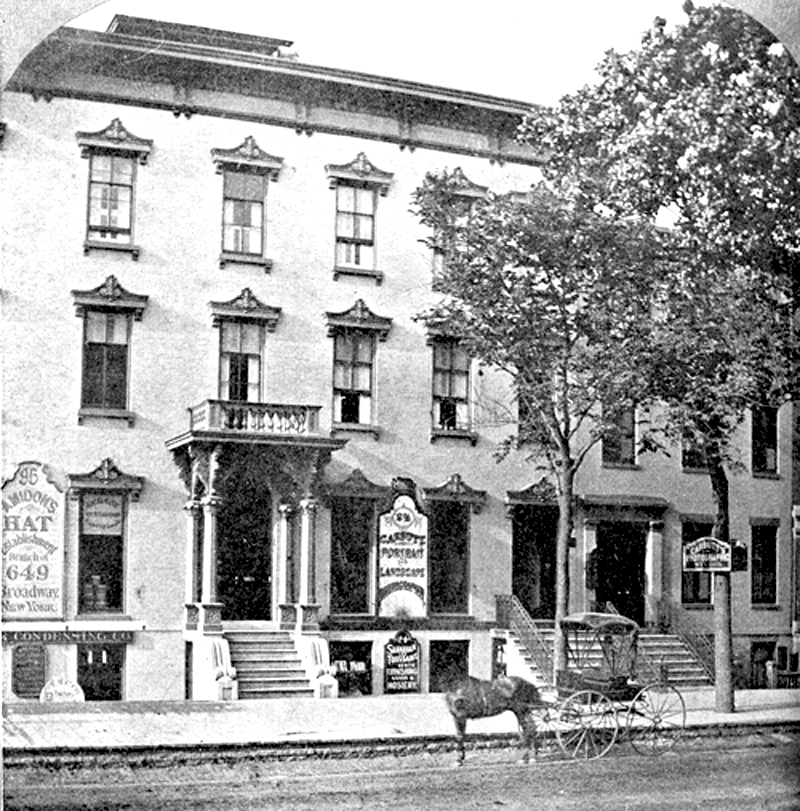 Chicago. A Hand Book for Strangers & Tourists to the City of Chicago, 1869

The stranger, in visiting the photograph galleries of Chicago, should take a note of the location of Carbutt’s, No. 24 Washington street. His elegant parlors are adorned with specimens of his art, equal to any that can be produced in the profession any where. His Berlin photographs, from retouched negatives, are most exquisite productions of the highest skill, and present all the beauty of porcelain miniatures. At a recent assembly of the State Microscopical Society in this city, Mr. Carbutt both astonished and delighted the critical audience by an exhibition of many beautiful objects photo-micographed by him with the oxy-hydrogen microscope.

Artistic Photography.
The magnificent temple of photographic art heretofore known as Carbutt’s, at No. 24 Washington street, has undergone a change in proprietorship, Mr. Carbutt withdrawing in order to devote his attention to another branch of art. Mr. S.W. Sawyer, late of Bangor and Boston, has purchased the splendid establishment. Mr. Sawyer comes West with the highest of credentials as a practical photographer, having ranked in the East as a pioneer in the profession, as well as among the first and most successful. The high recommendations he brings furnish ample assurance that he will worthily and capably fill the responsible position he has taken in Chicago, and that he will fully succeed to the eminent reputation achieved by his predecessor as one of the finest photographers in the world. Such of the Chicago public as will have none but the of photographic work, may safely patronize Mr. Sawyer. 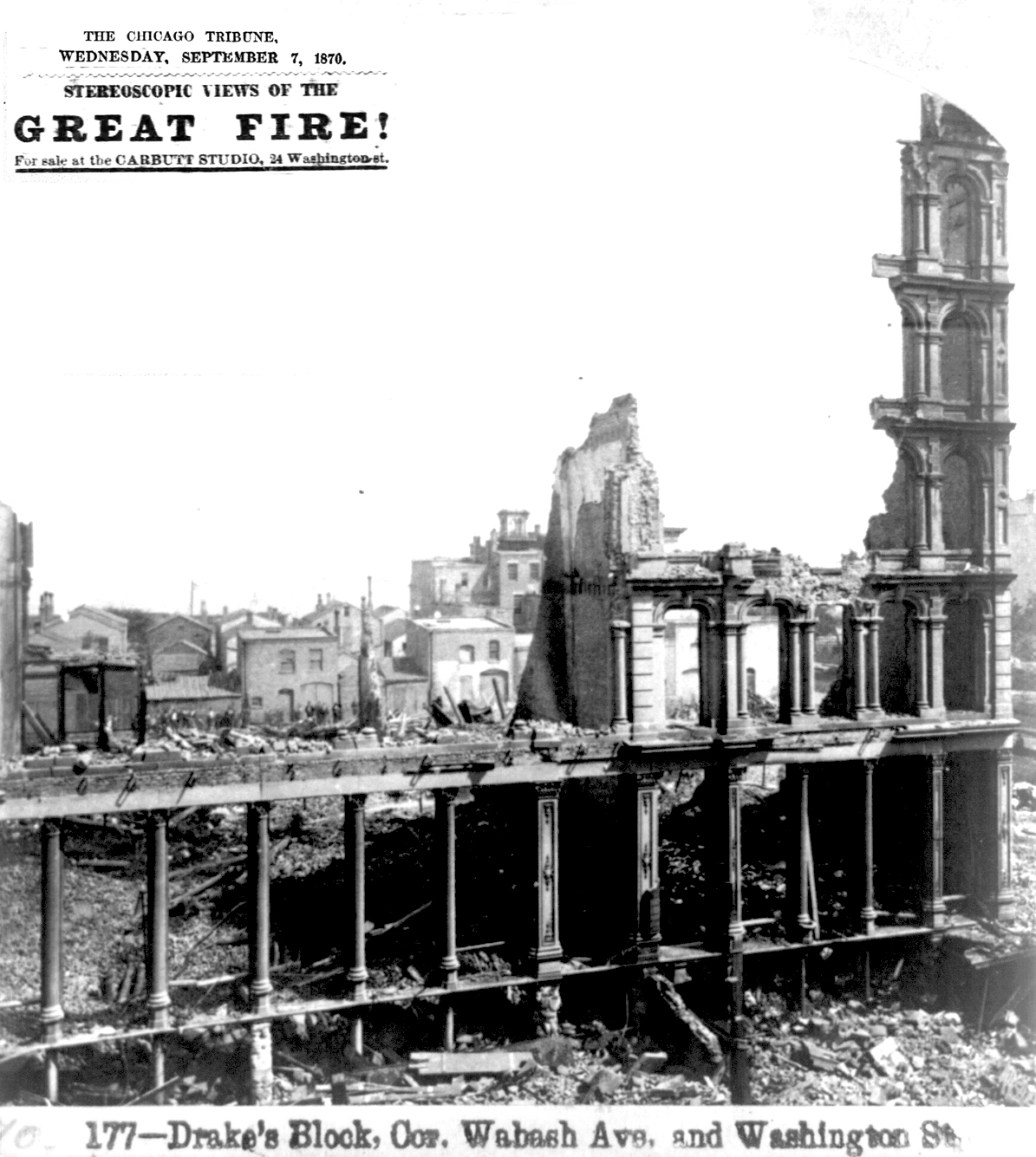 Just over a year before the Great Fire consumed Chicago, the other Great Fire was that of the September 4, 1870 conflagration that took down the Drake Block and Farwell Block on Wabash avenue and Washington street. Mr. Carbutt’s studio was located very close to this building and was immediately selling stereoviews of the “Great Fire.”

The best of the pre-Fire photographs (stereoscopes) were taken by John Carbutt, who had a studio at 131 Lake Street from 1861 till June, 1868 and at 24 Washington-street, just west of Wabash, till September, 2, 1870. Mr. Carbutt issued a series of 195 Views of Chicago that were taken between 1864 and 1870. It seems that there has not been a comprehensive registry of these historically important images. Mr. Carbutt issued this set three times, and it is believed that each number he asigned remained with the subject.

Mr. Carbutt was born in England in 1832 and emigrated to the States in 1853. From 1853 to 1859 he worked as a photographer during the construction of the Grand Trunk Railway in Canada. He was reported to have been the first photographer in Chicago to take cartes-de-visite portraits. Cartes-de-visite were small visiting card portraits (usually measuring 4½” x 2½”) and were in vogue till about 1860. These were replaced by the larger (6¾” x 4½”) cabinet views which remained popular till the turn of the century. He experimented with dry plates in his Chicago studio as early as 1864, and with magnesium light for flash in 1865. He ultimately introduced the first successful Gelatin-Bromide Dry Plates in 1879; the first Orthochromatic Dry Plates in 1886; first Celluloid Dry plates in 1888; and the first commercial X-Ray plates in 1896. He died in Philadelphia, PA in 1905. 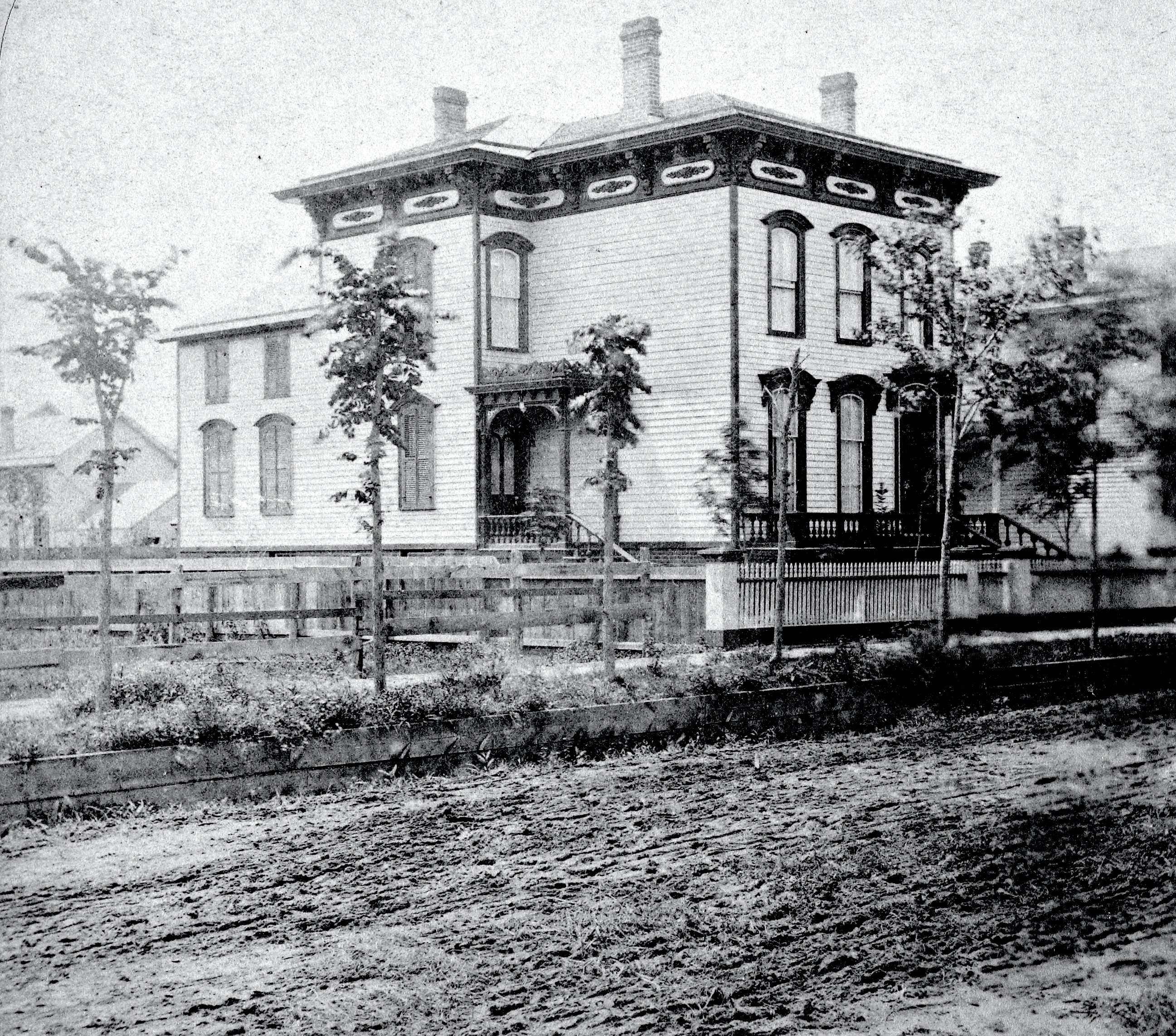 Residence of John Carbutt
Maypole Street, Near Ashland Avenue
About 1866 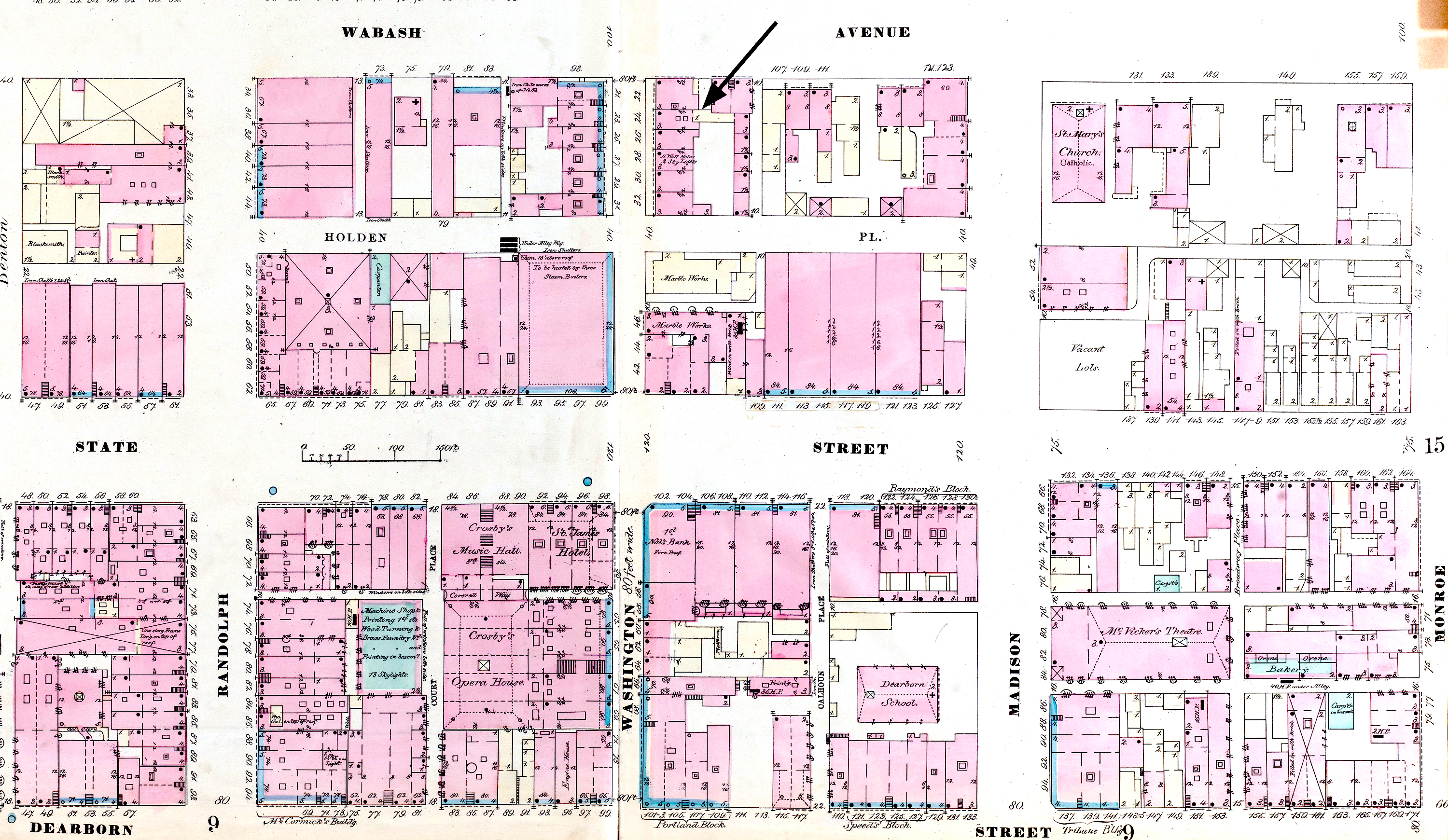 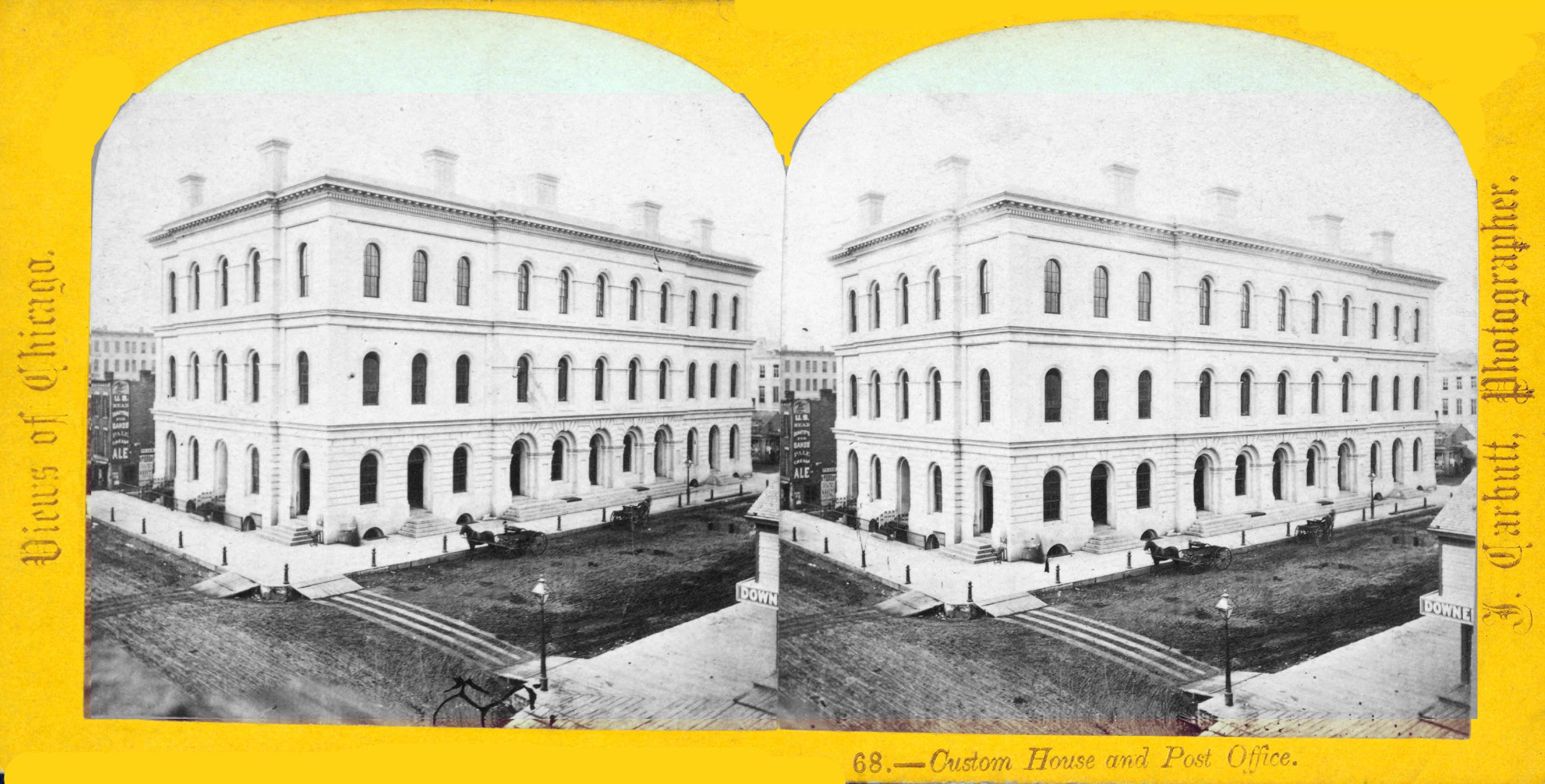 Michigan Avenue, from Adams Street
John Carbutt, No. 176
About 1861 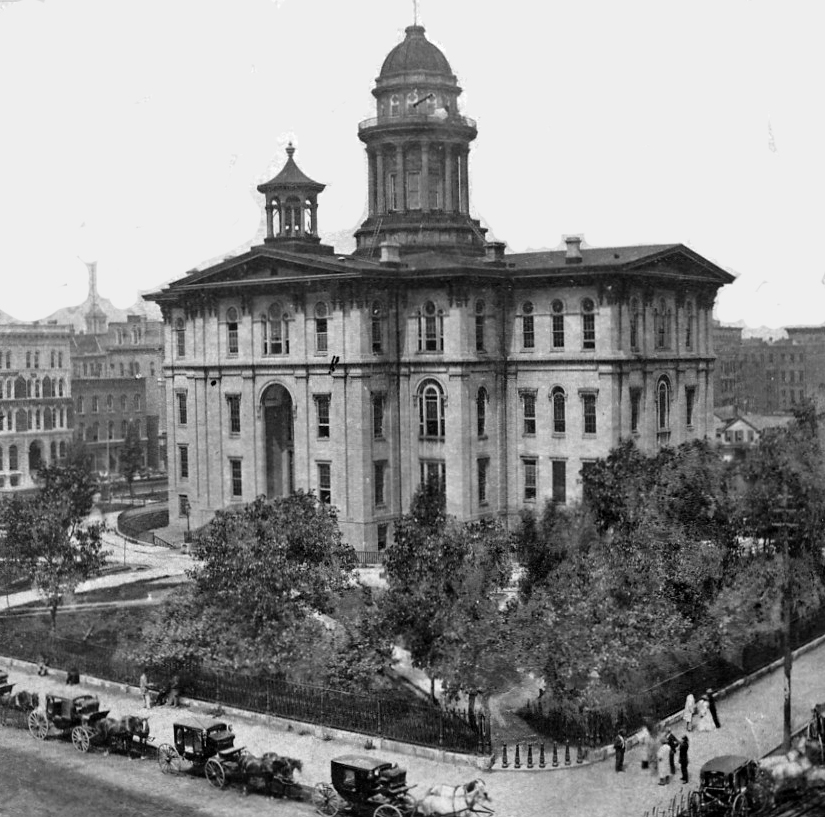 1 The first crude attempt of half-tone printing was done in The Canadien Illustrated News, October 30, 1869, with an image of Prince Arthur. However, the it wasn’t until 1881 when the first commercial method was patented by Frederick Ives of Philadelphia.